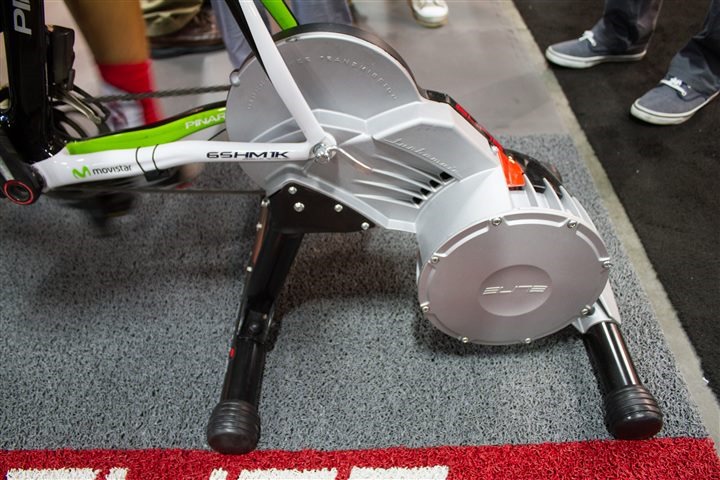 Over the last week many of you asked me to look into Elite’s new Turbo Muin trainer, which was just announced by the Italian cycling company.  So I did just that, thus, let’s dive right into things.

The 17kg (37.4lbs) fluid trainer contains a 5.9kg (13lbs) flywheel that contains a known power curve up to 2,200w if pumping along at a blistering 60KPH.  The unit includes a foldable frame to slightly decrease the overall real-estate for storage post-ride.

Unlike some trainers where the flywheel often acts as the internal fan and/or cooling unit, the Turbo Muin contains a secondary fan for cooling, which you can see below to the lower left. 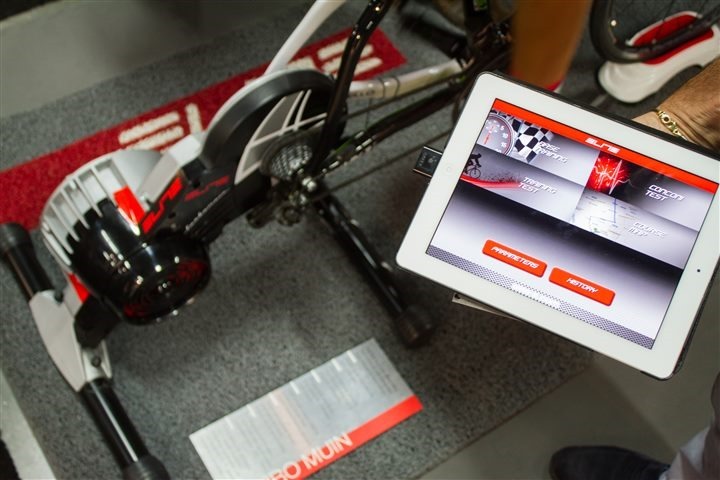 It’s in part due to this design and a chambered approach that makes the unit so astoundingly quiet.  I was hoping to get a good audio clip of it, but every time I was in the area the convention center was crazy loud – so while you’d never hear it, it would have been kinda pointless to take a clip of not hearing it because folks would have assumed it was just due to the other loud sounds.

From listening to it multiple times over two days the only thing I heard was the sounds of the bikes drivetrain and chain going through the cassette/chainring.  It’s possibly going to be slightly more noticeable in a quiet living room, but without question by far the quietest trainer I’ve seen to date.  It’s like comparing the roar of a lion (normal trainer) to that of a house cat with duct tape on it (Turbo Muin). 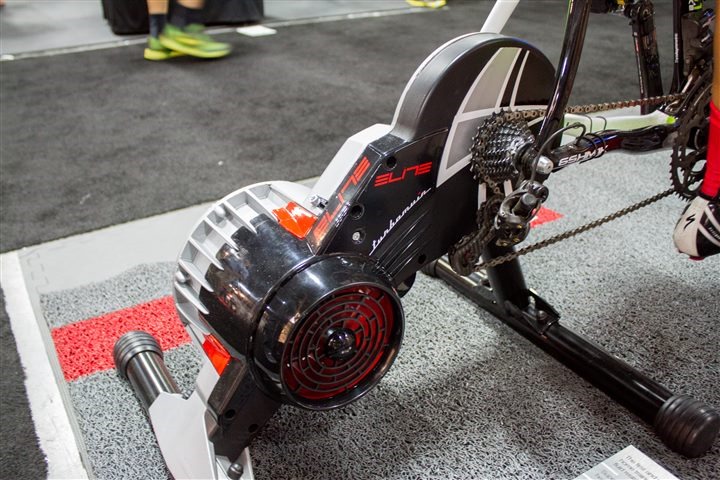 In order to determine power and speed, a speed-sensor is placed hanging off the chain stay near the flywheel.  This reads a magnet inside the flywheel enclosure.  Based on the magnet the unit can determine speed.  Because fluid as a resistance medium is very stable, the power curve is quite predictable.  That means that at X speed, the power will always be Y.  For example, at 15MPH, the power might always be 326 watts.  They said on average it takes about 2-3 minutes for the fluid within the unit to reach stability from a wattage power curve standpoint.

This speed is then broadcast via ANT to the iPad app I’ll discuss in a moment.  The only trickiness with the below implementation as one can pretty plainly see is that you’ll need to rotate the sensor in/out of where the rear wheel would normally be each time you attach the unit to the trainer. 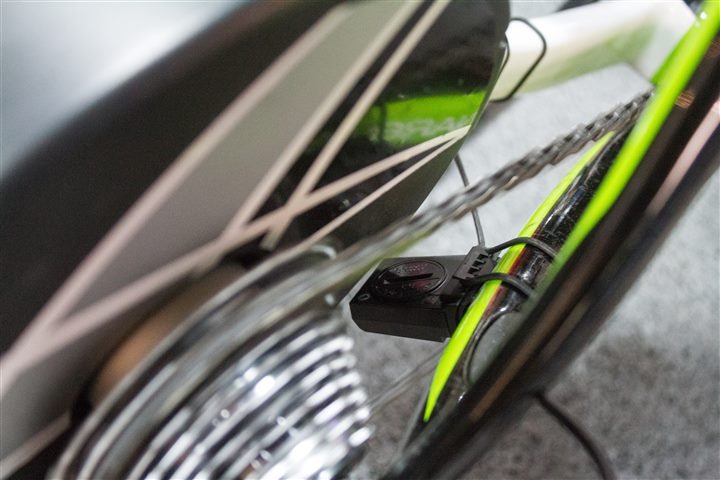 The secondary challenge here is that the unit isn’t actually broadcasting your speed and/or power via ANT+.  Instead, the app has to convert the speed using the known power curve to display power to you in the app.  It’s really too bad that the unit couldn’t simply do that straight forward calculation internal to the sensor and then broadcast speed/power as true ANT+ to any head unit.  That way you could simply connect a unit like a Garmin Edge or other bike computer to get more information straight into that device.

Looking at the app side, the unit includes an iPad app that will chart and display your speed/cadence/distance/power.  The iPad app requires the use of the ANT+ iPhone adapter, seen below attached to the iPad. 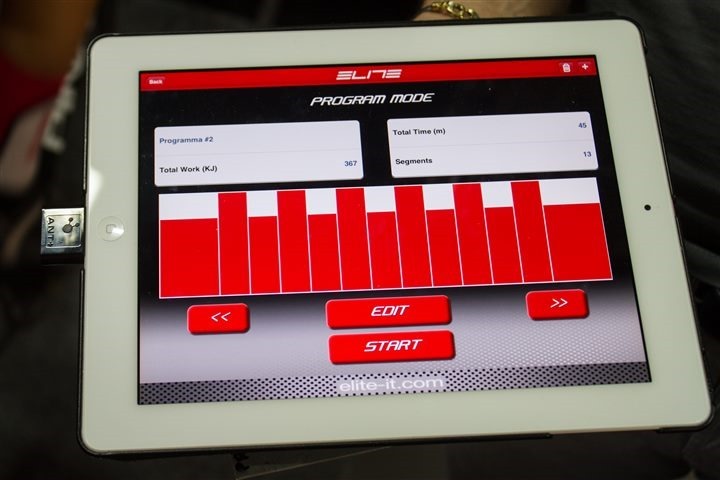 Above you have a workout/interval mode, and below you’ve got more of a generic display mode. 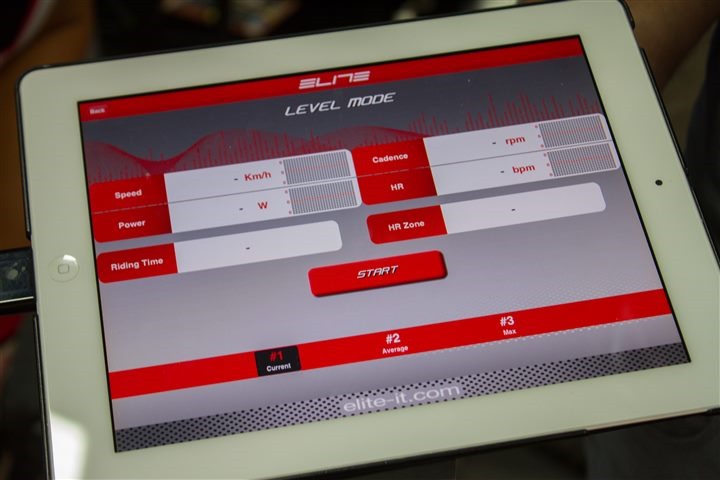 Now, in the case of the Turbo Muin, it won’t actually control the resistance – rather, it will simply report your current power.  That means that for the workout creator (seen above), it’s really more about giving you visual queues to adjust your speed to in turn adjust resistance.  Remember there isn’t a resistance control lever/knob – resistance is simply controlled by speed.

In addition to a workout creator mode, you can also create and ‘ride’ pre-created routes over maps. 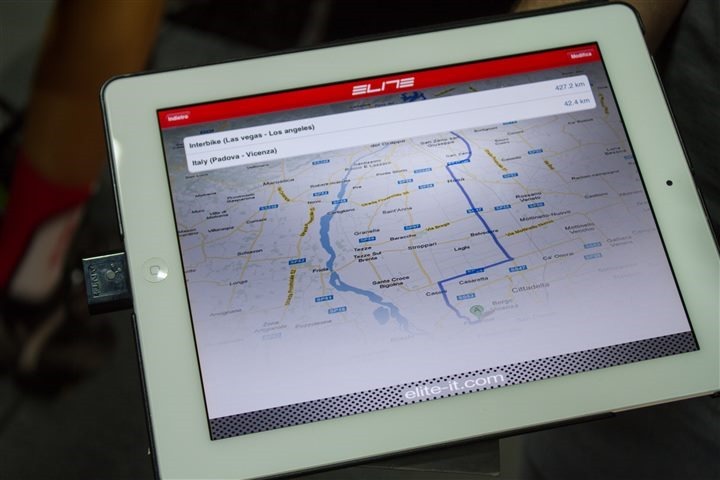 In this mode you’ll see the distance/cadence/HR/power and speed, as well as an indication of the slope of that area of the map.  Like the workout mode, again it won’t control the resistance to the corresponding slope.  Instead you’ll just need to adjust your work-effort to match the increased slope (such as by changing gearing). 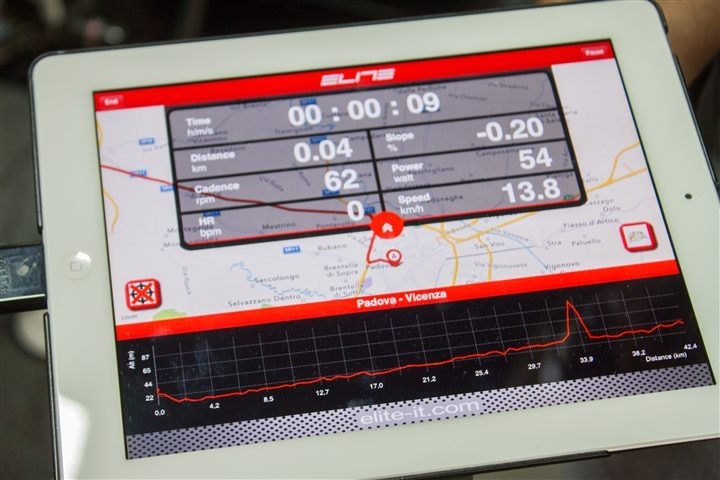 Once you’ve completed a course you can share it onto Twitter/Google+/Facebook: 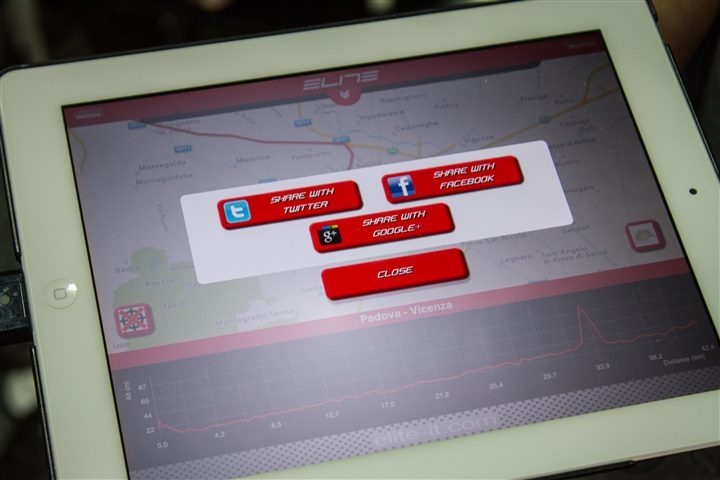 In addition to sharing with your friends, you can also transmit a .CSV file via e-mail to whomever you prefer…like, yourself. 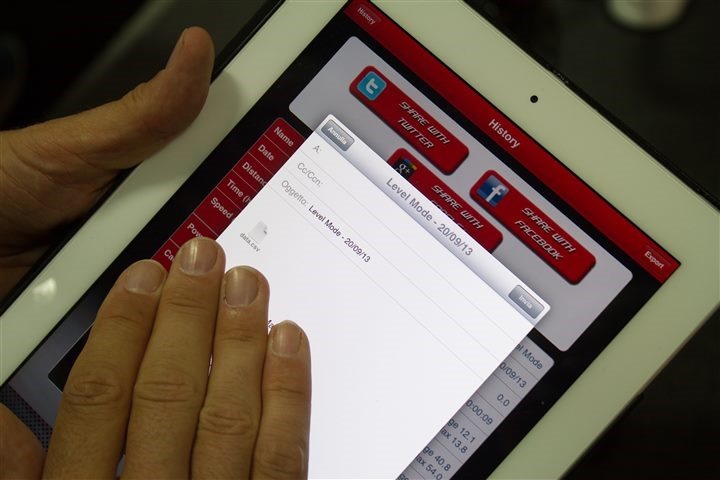 The Turbo Muin trainer costs $719US/580€.  The app costs $12US/10€ per year.  There’s also a 10-minute free trial of the app permitted as well.  This pricing puts it slightly on the high end of non-resistance controlled trainers, a touch bit more than the LeMond Revolution (ironically pitting this as the quietest trainer on the market with what is the loudest trainer on the market).  If Elite had provided in-box ANT+ power meter broadcasting I feel the unit would be much better positioned in the market.

The trainers are built in Italy, and delivery is expected in late October for Europe.  US will follow in early December – or simply the length of time it takes for the boat to float from Italy to the US.

While I will be testing one out, it’s unlikely a unit will arrive in time to include in my trainer roundup and recommendations post in two weeks.