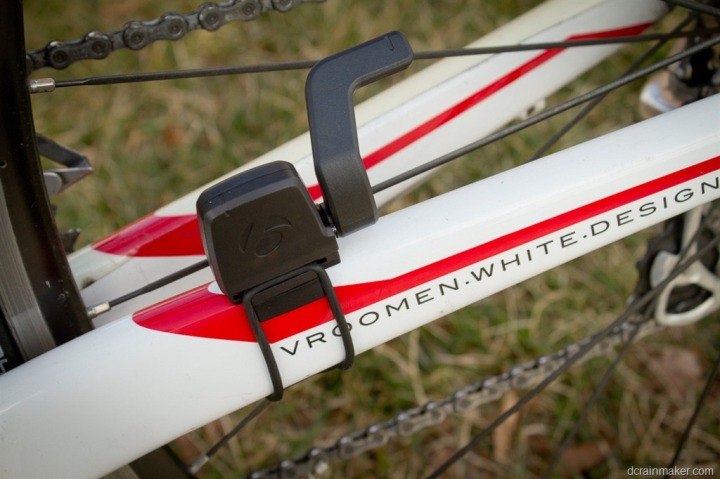 It’s funny when you think about it, as much innovation that goes on in cycling computers – there’s been fundamentally very little innovation to date when it comes to the speed/cadence sensors that most of us have on our bikes.  These little pods sit by the crank and watch the world of the wheel fly by.  But up until now, they’ve always been a bit of a pain in the butt.

First, you’ve gotta find just the right spot for it where it manages to trip the magnet on the crank while at the same time your wheel spoke magnet.  Then, you’ve gotta zip-tie the thing on there permanently – hoping you got it right.  And of course, should you want to move the thing later on, you’ve almost always got to cut off the zip ties, hoping you don’t scratch up your expensive bike’s paint job in the process.

So back in September at Interbike (yup, 5 months ago!) I had heard of this new Bontrager ANT+ speed/cadence sensor that didn’t require any zip ties, nor any tools.  I was pretty jazzed.  Now, it wasn’t because I had some unexplainable desire to replace my existing trusty little GSC-10 on my bike.  Nope, I actually wanted it because it made the perfect travel ANT+ speed/cadence sensor.  Essentially, anytime I wasn’t on my own bike I could just attach it in a few seconds and be off and running.

Of course, the unit also work just as well in situations where you had multiple bikes and only one ANT+ sensor (though, I would point out that if you had multiple bikes, you could probably splurge for an extra $30 sensor for each bike, and then leverage bike profiles on your head unit).  But let’s not let logic get in the way here…further, let’s not get too ahead of ourselves.

So let’s dig into it.

I’ve had the unit since back in December and have been attaching and detaching it to everything I can find.  Mostly to see how well it works in the scenario of constant bike swappage.  I couldn’t figure out a way though to attach it to either the shark or my turtles.

So instead, let’s break down what’s included in the box: 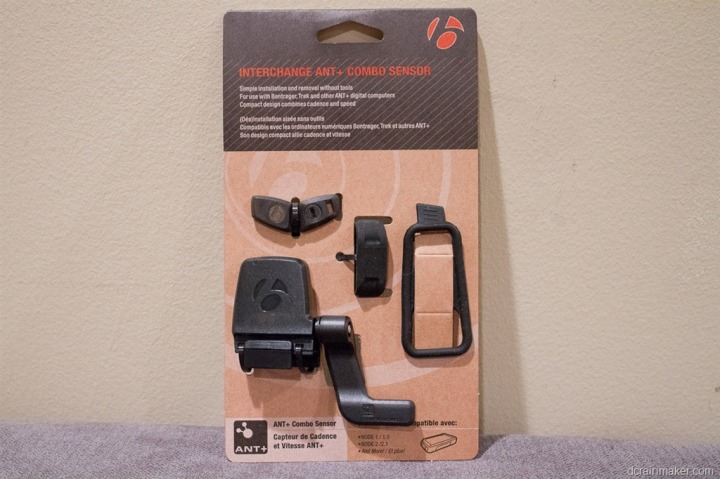 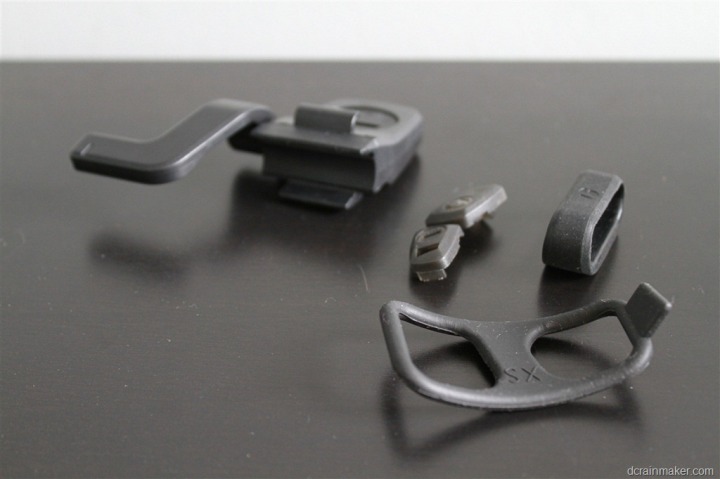 First up is the ANT+ speed/cadence sensor itself.  This is the brains of the unit, and is what transmits to ANT+ devices (i.e. your Garmin, Timex, Bontrager, CycleOps, etc… unit): 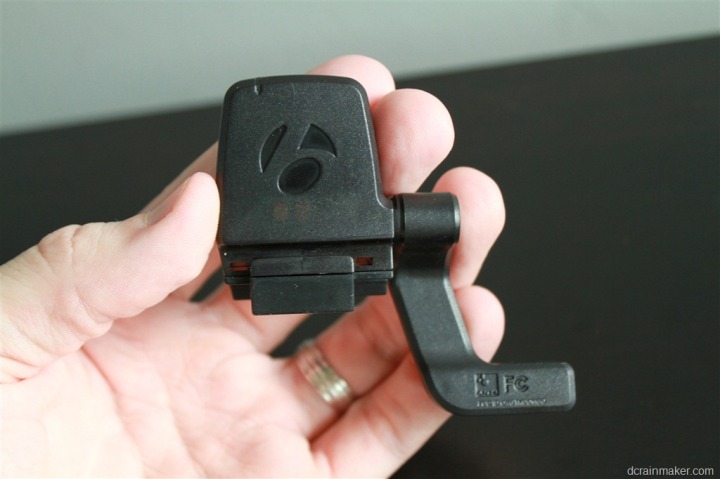 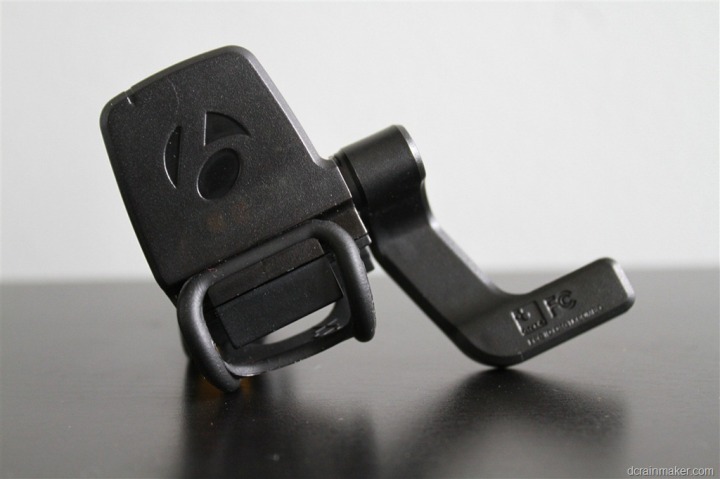 The unit attaches to your bike using the industrial strength rubber band pictured below.  If you’re familiar with the Edge 500/800 mount system, it’s the same type of bands.  Solid stuff. 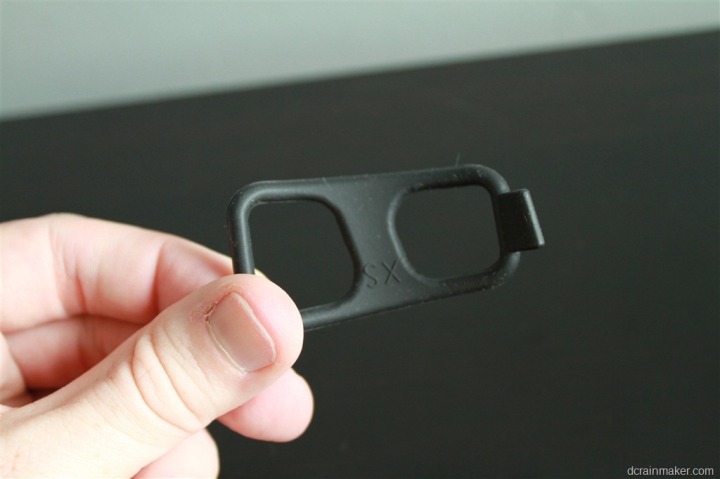 Then we’ve got the crank arm magnet, which swings past the sensor to measure cadence.  Unlike traditional magnets that attach via zipties, this one does require you to remove the pedal to use – but it then snuggly fits on there. 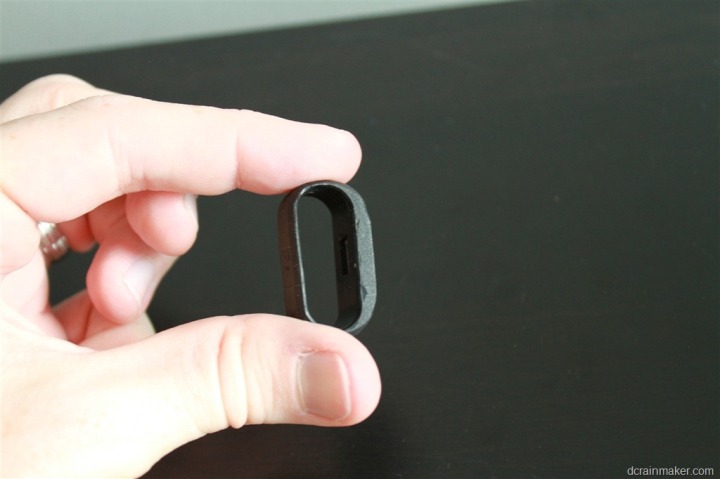 And finally, the ever-exciting spoke magnet for your rear wheel.  This little guy goes around in circles like a hamster on drugs.  But, no tools are required – he just snaps on. 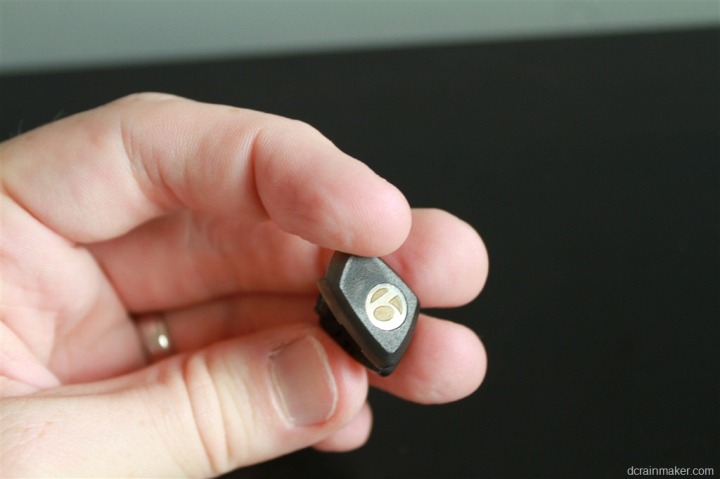 With that, you’ll want to get it all installed.  The main sensor portion simply has an industrial strength rubber band that catches on the two ledges of the unit and wraps around your bike frame opposite the chain stay. 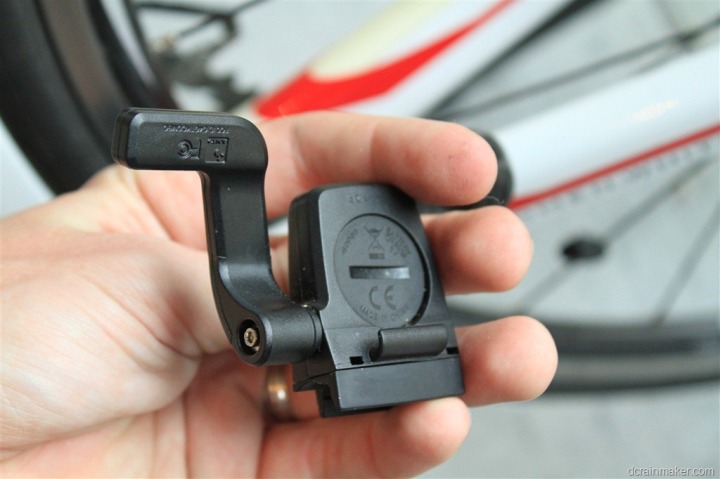 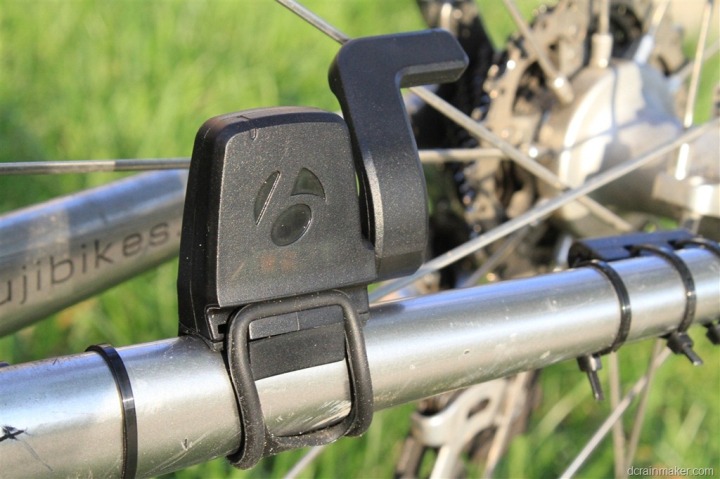 Meanwhile, as noted above, you’ll have to remove your pedal to put on the crank magnet.  It’s a bit too bad they couldn’t have done something here requiring no tools, but I also understand that it does need to be pretty tight.  Nonetheless, most places where you would rent a bike would ask you which type of pedals – so you’d probably have the pedals off anyway (and in fact, in many places you take your own pedals with you).  Of note is that this is the same crank magnet as the Duotrap units. 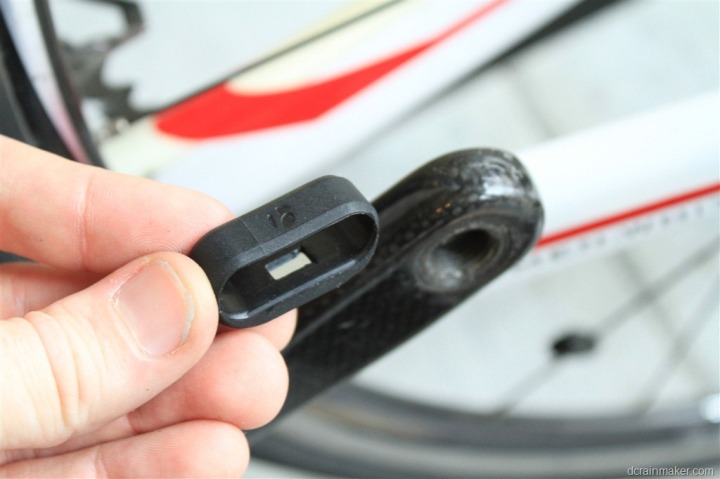 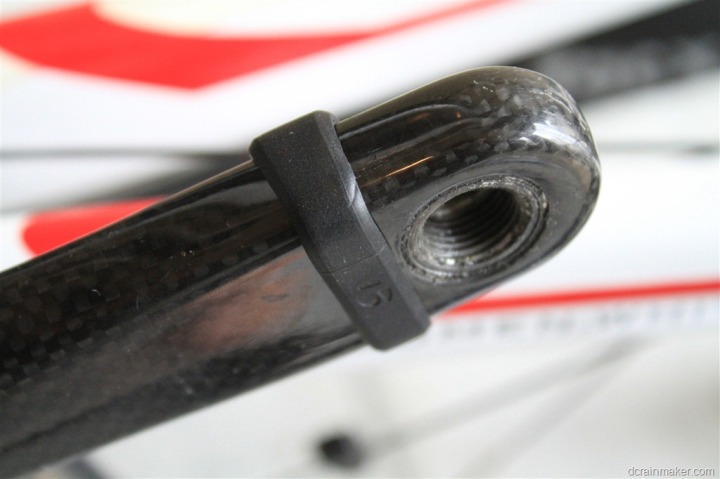 And finally, the spoke magnet.  He simply clips on with a quick snap: 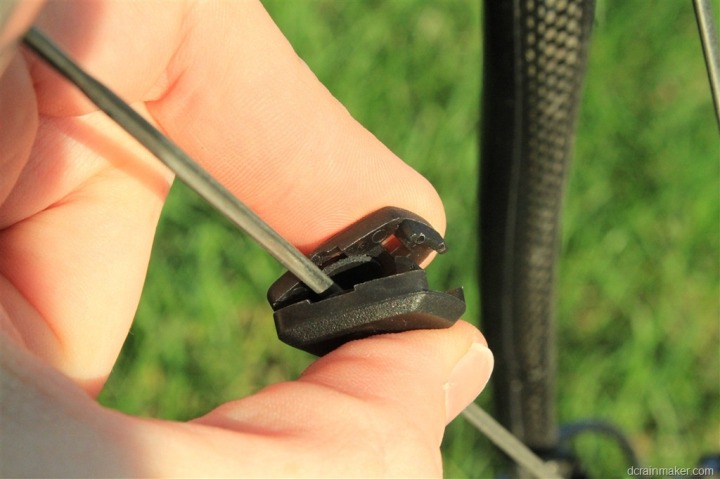 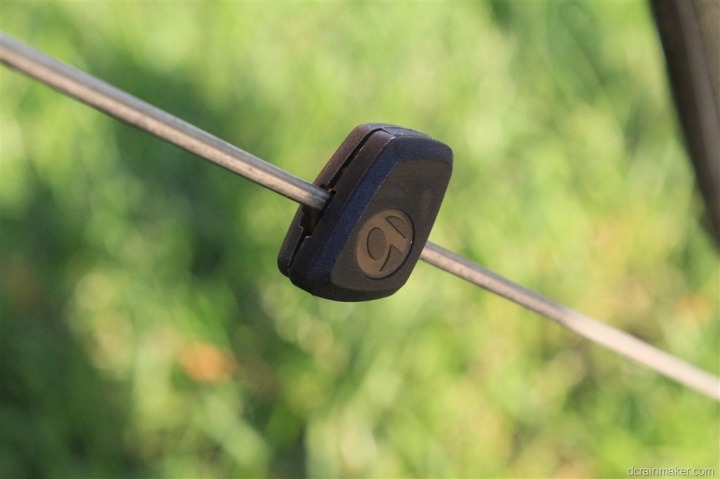 With that, you’re ready to ride!

I’ve been using this across an assortment of bikes (road, mountain and triathlon) – without any issues.  The unit runs on a standard issue CR2032 replaceable battery, which is pretty much the standard these days for sports devices.  They’re easily found at a grocery/drugstore, and will last about a year.

Since the unit acts as a standard ANT+ speed/cadence sensor, it’s functionally identical to that of the more commonly found GSC-10 (Garmin Speed/Cadence sensor).  So it’ll work with any ANT+ device that supports the cycling speed/cadence sensor…which, is basically every device out there.  Be it from Garmin, Timex, Bontrager, Wahoo, Digifit, CycleOps, Magellan, and more – they all support this sensor type. 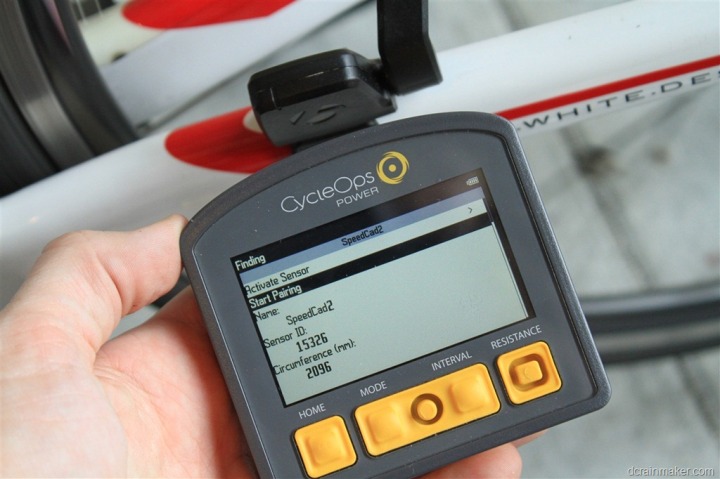 It should be noted that with both the wheel magnet and the crank magnet, you can use anything that you might already have on the bike.  Why is this relevant?  Well, spoke and crank magnets can be had for super-cheap.  Like, $1 cheap.  In fact, if you’re a regular contributor to your local bike shops beer stash, they’d probably happily toss it to you.  This is of note if you simply want to move the speed/cadence sensor unit itself quickly between bikes.  As you can see below, on one bike I just have a generic wheel magnet: 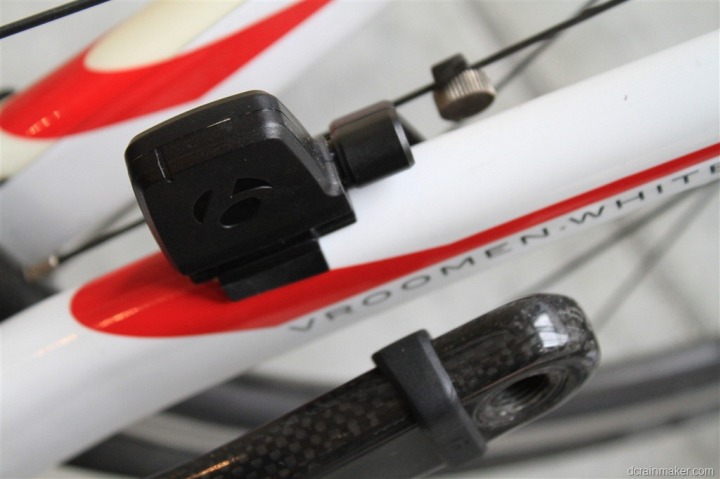 Also, many times you’ll find that the rental bike you have may already have the cadence magnet on the crank.

Now, this is also of note if you manage to break the wheel magnet.  The only complaint I have about the unit is that the wheel magnet is somewhat easy to break when removing, if you open the clamshell design in the wrong direction.  Not the end of the world, since a new magnet is only about a buck, but a small bummer nonetheless. 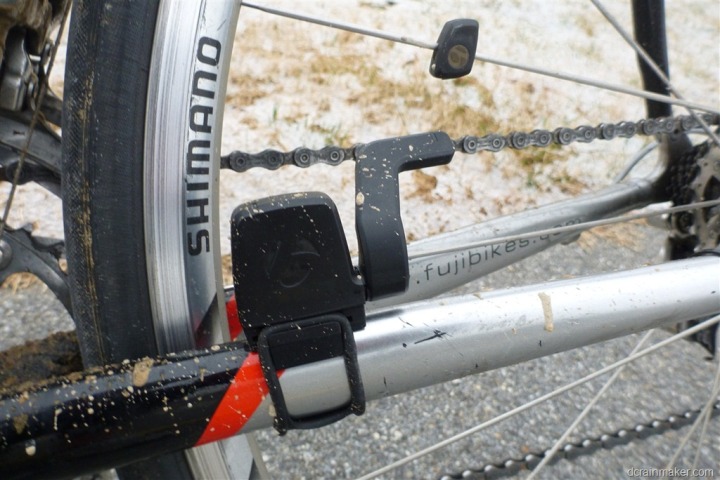 Speaking of breakage, I will note that I did completely destroy one of these units a few weeks ago – though through not fault of the unit itself.  I was testing the Polar Power Pedals and trying to align something else with the back wheel still spinning rather fast (very stupid, yes).  During the process of which I bumped the cadence sensor into the wheel.  With the bike wheel effectively a giant garbage disposal at 245 1,300RPM (yup, that’s how many RPM’s a wheel goes at 20MPH), it slaughtered the sensor in the blink of an eye – shooting it out the back of the bike on a trainer at incredible speed.  This…was the resultant: 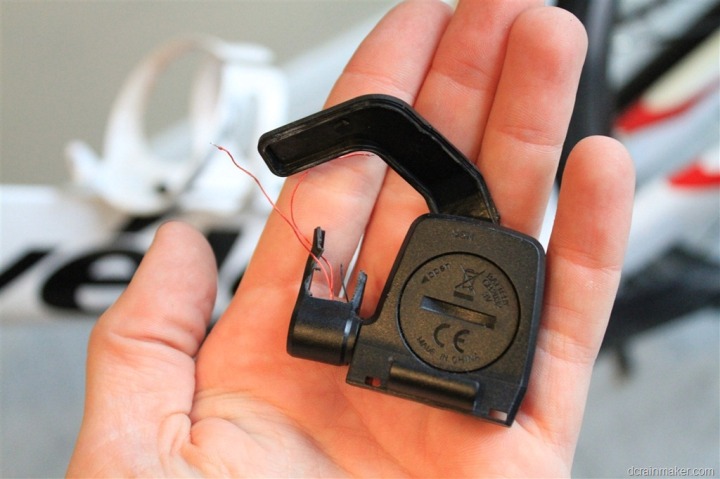 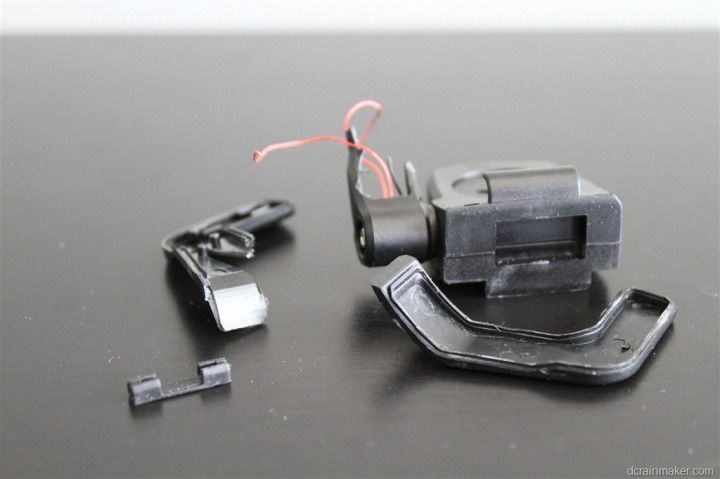 But again, rear bike wheels will happily eat anything you throw at it.  Like cookie monster.  I’ve lost a Garmin speed/cadence sensor to one in the past, and I know others have as well.  The nice part is that with the breakaway aspect of it, it didn’t injure my rear wheel or the spokes.

Finally, for those that are curious about size comparisons, I present the GSC-10 and Bontrager quick release speed/cadence sensor side by side. 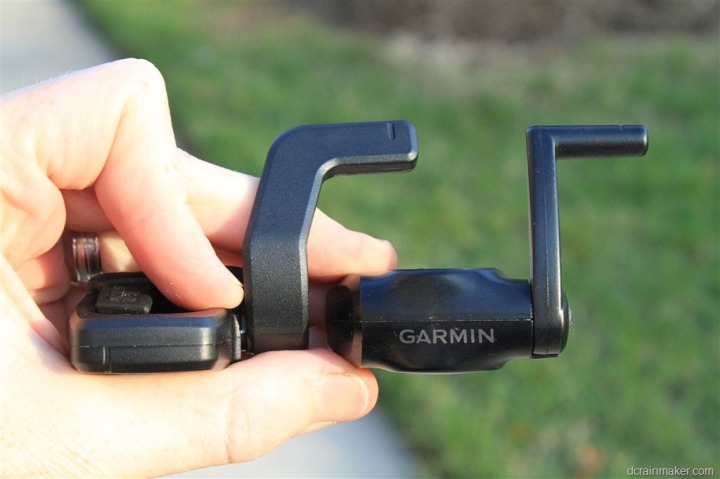 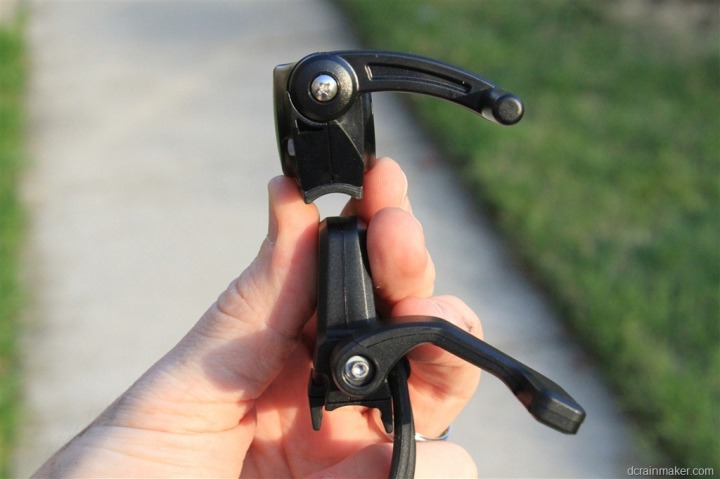 Also, someone recently asked why I often place the speed sensor arm ‘upwards’ and not ‘downwards’.  Well, it depends on the bike.  In the case of my Cervelo P3C, there isn’t enough clearance between the bike frame and the wheel by placing it downwards, it would rub.  Whereas on my Fuji road bike, there’s still clearance for the downwards angle.  If you can go downwards with the arm, it’s a bit better in the situation where the wheel hits it – since you stand a better change it won’t snap it entirely.

So where do you find one of these magical sensors, and how much are they? Well, they just hit the market a few weeks ago and retail for $59, but I suspect you’ll be able to find them cheaper in due time.  Since they’re relatively new, a lot of shops aren’t directly carrying them yet.  As such, you can pick them up through only a few channels currently. The first is the Bontrager online store, and second would be just about any local bike shop can order them via their distributors.  If they’re ordering it for you, they’re looking for part Bontrager #424634.  I rarely make note of part numbers, but since there are so many speed/cadence sensors on the market, it’s important to ensure that if you pay sixty bucks for this one, you at least get the right one.

As always, if you’ve got questions, feel free to drop them below.  Also note that if you’ve got general questions about speed/cadence sensors – then definitively check out my post: The ANT+ Bike Speed/Cadence Sensor- Everything you ever wanted to know .  And if you’re curious about the Bontrager Duotrap (for frames that support them), then you’ll want to hit up that post instead.