A weekend riding past the beach and swapping power meters

Looking at this past weekend, I’m not really sure where it went to.  In fact, the same can really be said for July as well.  As The Girl pointed out last night: “What July?”.  Neither of us have any idea where July went, as the last thing I remember it was June.  And then poof – now it’s August!

So despite my lack of clarity on where the weekend went, here’s my best attempt to reconstruct it…

Technically this was more Thursday evening than Friday evening.  But that’s alright.  I figured you wouldn’t mind.

The beaches opened up a few weeks ago here along the Seine.  It’s about a 400 yard walk for us, so only takes a few minutes to get there. 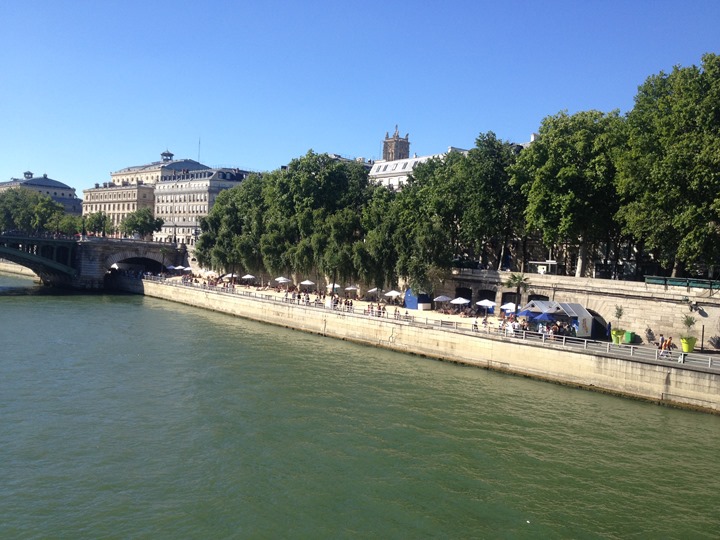 They’ll be open till later in August, though only about a month in total.  I suspect they only stay open a month because  most Parisians leave and close up shops, so it overlaps with that generally agreed upon vacation time.  Otherwise folks with cars would complain about the impact on traffic. 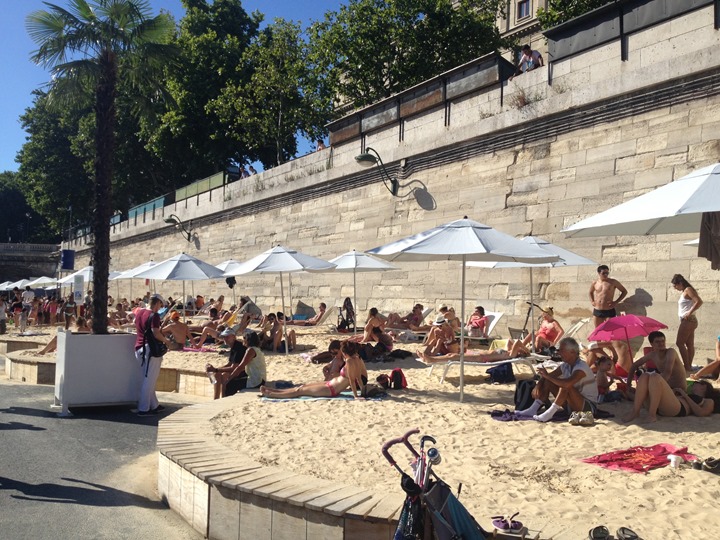 I’d almost think that perhaps with the other side of the river now permanently closed to cars for the newly opened park, that maybe next summer they’ll move it over there and keep it open all summer.  Though, you’d miss out on much of the pretty architecture along this stretch. 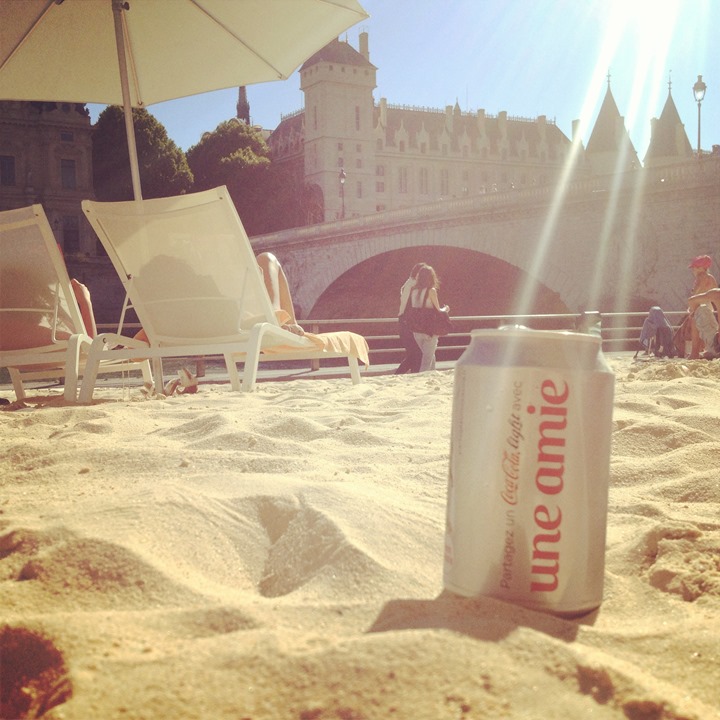 In any case, we went there around 5PM or so and stayed a few hours, just enjoying sitting around in the heat (90*F).  Eventually heading home as the sun faded. 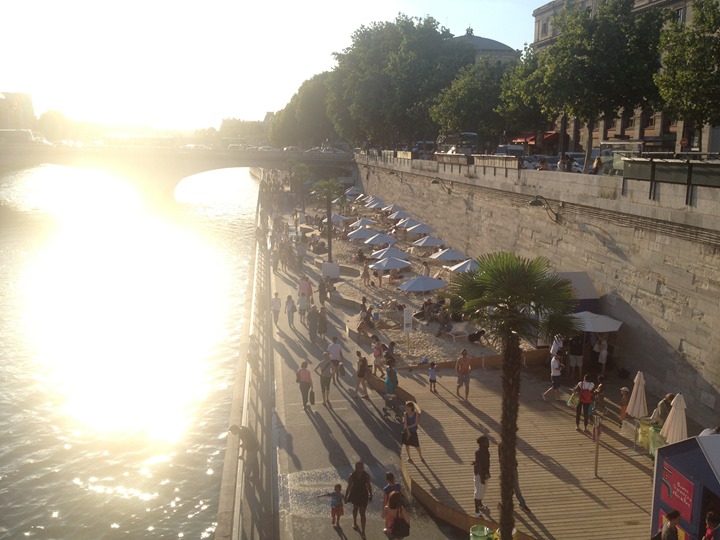 As for Friday evening, I had my longish run.  Not terribly long actually, only about 11-12 miles.  It was hot.  And humid.  And I ran.  Somewhat slowly.

When I was done, I was happy to make out with this glass of ice water: 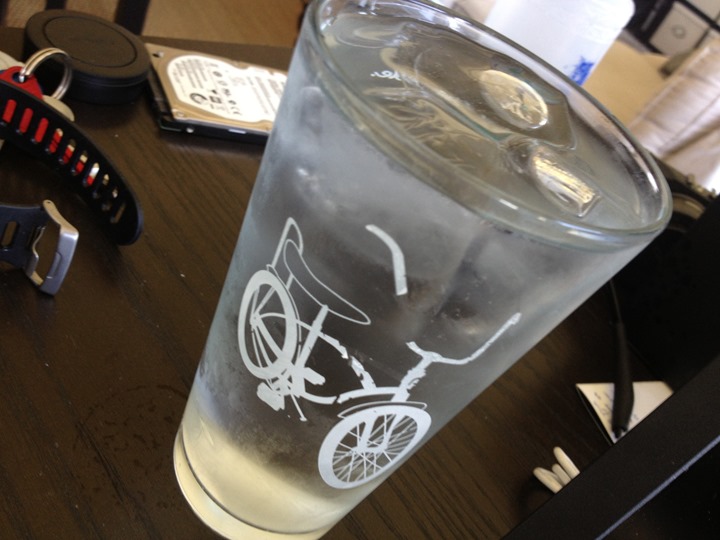 And that’s all there was.

I slept in.  Because I can.  And because honestly I don’t see many opportunities for doing so in the near future, and I certainly haven’t had many in the recent past either.

By time I ate and got ready I was heading out the door at 1PM.  The weather was a bit warm this past week (low to mid 90’s), but Saturday it had cooled down a bit into the 80’s.  Still, I had decided to throw two water bottles in the freezer the night before just to keep some cold water on hand during the ride.

I’ve found that if I have ice-cold water I’m far more likely to keep up the hydration on rides (or even runs).

With everything ready I headed down the little elevator and out the door.  I rode along the Seine until just after the Eiffel tower, ultimately crossing the Seine in between two creations of Gustave Eiffel (he contributed to designs of both structures): the Eiffel tower itself, and the mini Statue of Liberty (out of view to my left). 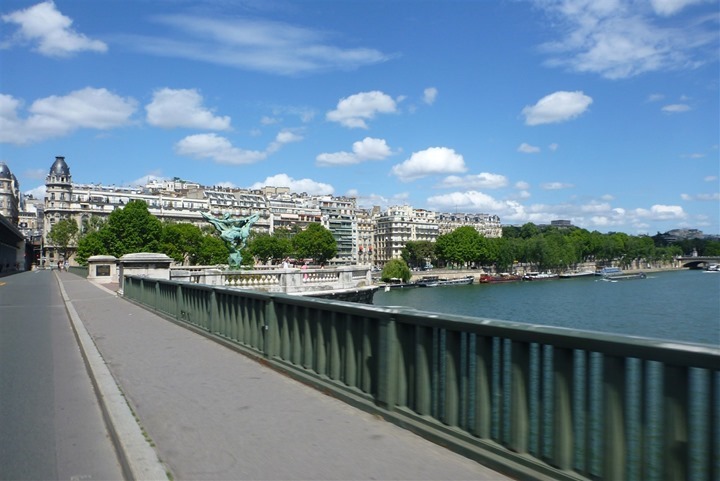 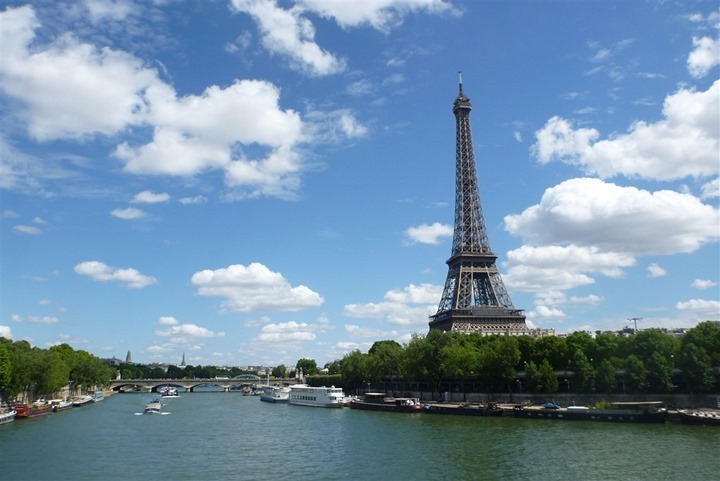 Then up through some quiet Parisian neighborhoods before passing by the now dormant Roland-Garros, the site of the French Open two months ago (again, how has summer gone by so fast???). 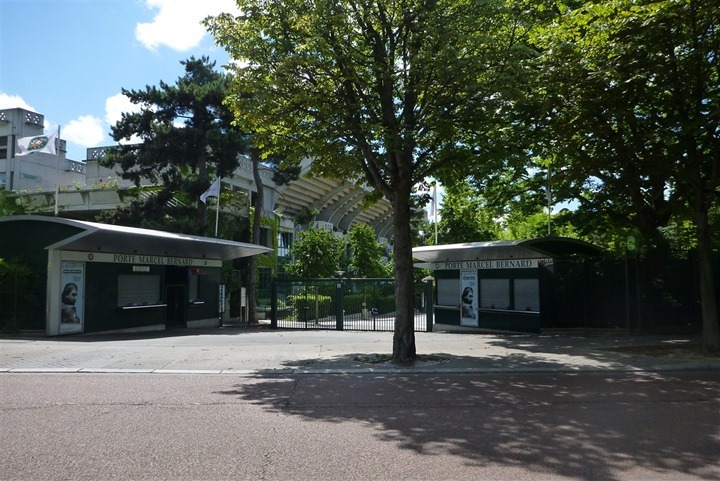 Then into the park I went, Longchamps for loops today.  While I’ve been enjoying getting out and exploring more of the countryside around Paris, for this ride I needed some consistent power meter data and the vehicle-free aspect of 6-minute nonstop loops around Longchamp is perfect for that. 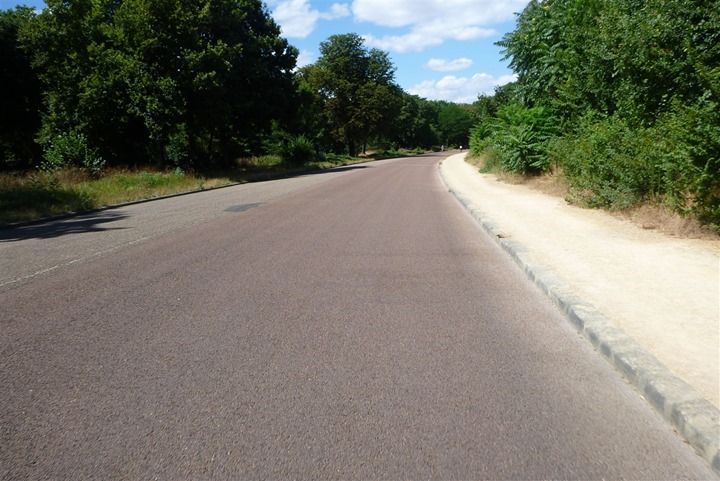 It was fairly quiet there from a cyclist’s standpoint.  Likely a resultant of being early afternoon rather than morning.  Though, the lawn areas did see a sprinkle of sunbathers. 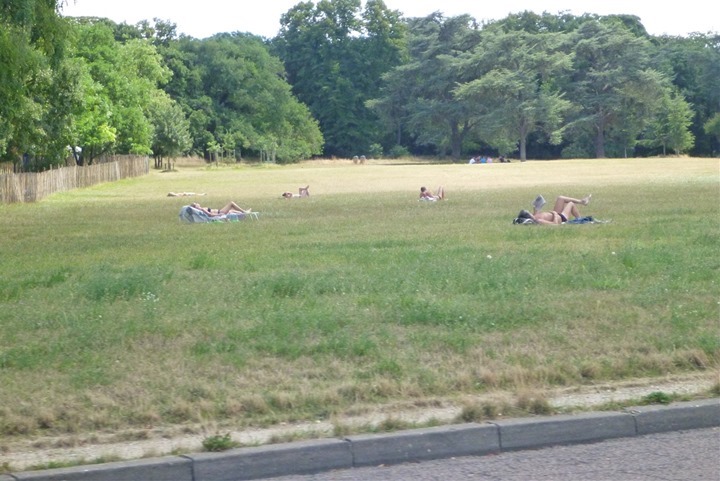 I always marvel at the mix of folks you get riding bikes around it (loops, not just passing through).  From 80-year old men on bikes nearly as old, to competitive cyclists, to women in mini-skirts.  Even folks doing loops on Velib’s (a slightly expensive proposition if you stay a while). 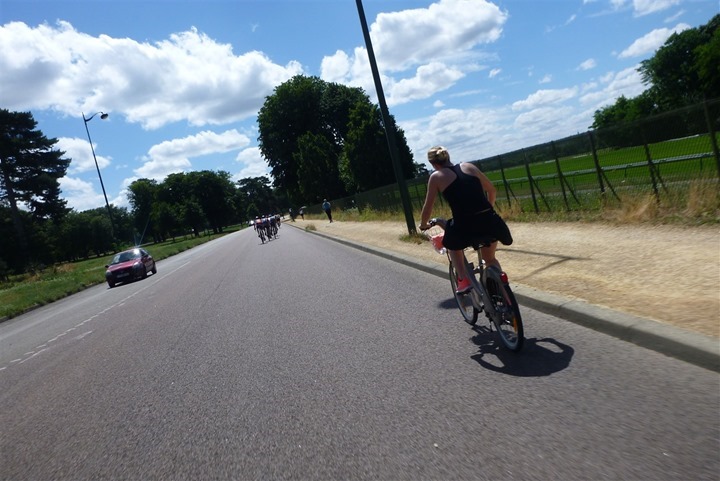 As I’ve noted before, the section where most cyclists ride around is actually the horse-racing track (on what is effectively a perimeter road).  Looks like we missed the party though: 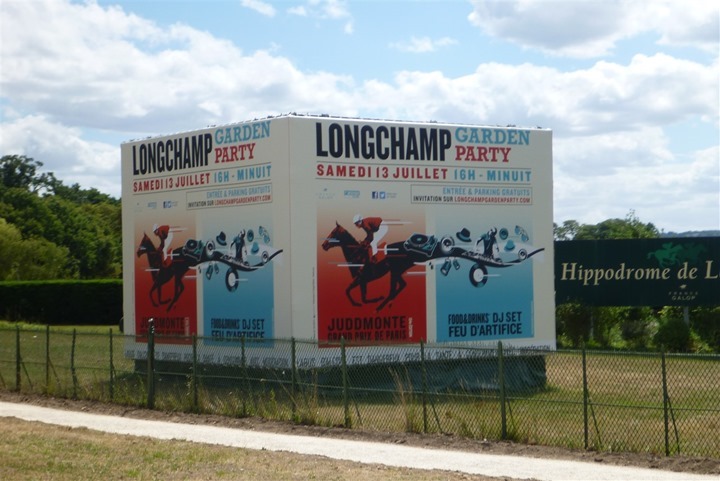 I’ve been meaning to go to one of the horse races at either of the two local tracks.  Typically, the tickets are silly-cheap from what I can see on billboards around the city.  I think a movie ticket costs more.

I thought it was interesting looking at the temperature data on the Edge computer for the loops.  There was clearly a ‘cooler’ section and a ‘hotter’ section of each loop, which you can see below (see that blocky blue-line).

The slight variation in barometric altimeter data you see on one loop is only 2 ft in difference.  Somewhat impressive consistency otherwise.

With plenty of loops complete, I worked my way back across the city.  It takes between 24 and 28 minutes each way to get from Longchamp to Notre Dame area, depending on traffic. 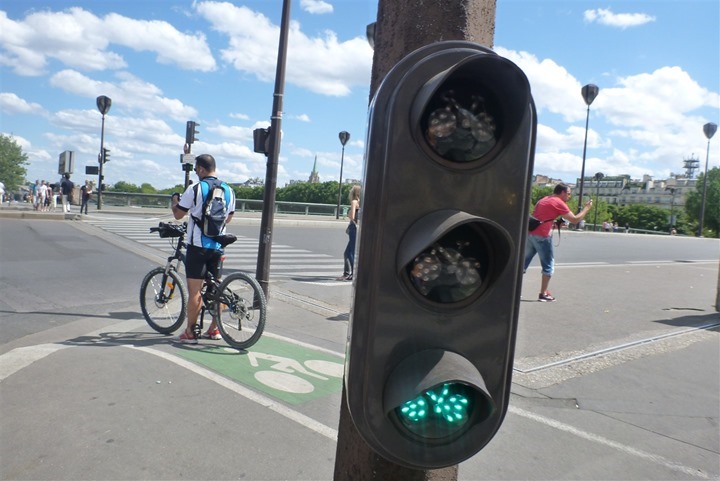 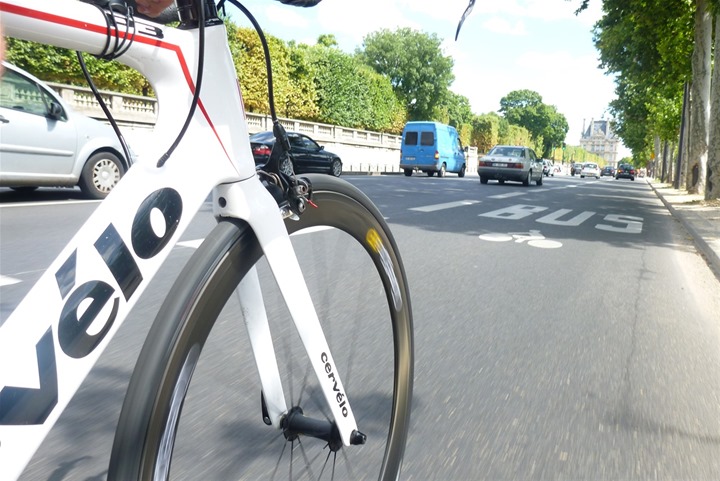 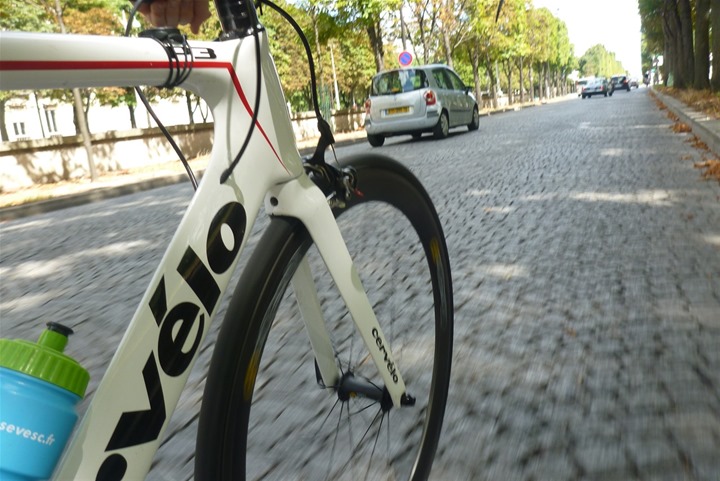 Sometimes, the traffic is just as much bikes as vehicles: 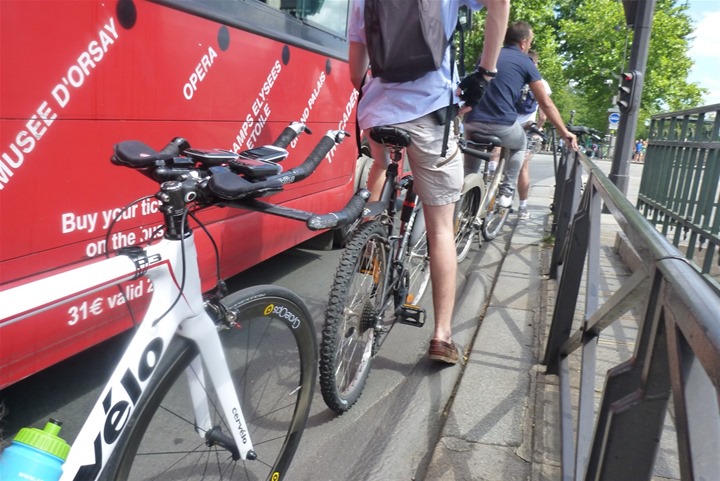 Soon after, I was riding past the beaches, making a partial loop around the island in order to top off the hourly odometer. 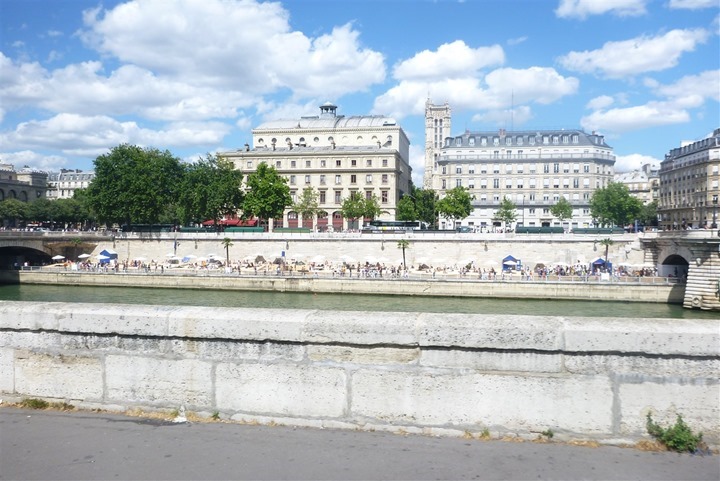 With the ride complete it was time to temporarily head indoors and do some bike product de-installation and installation.

I use my trips to the US as an opportunity to get products back and forth.  Mostly back, rather than forth (I do most shipping to Europe via a forwarding service).  This is mostly because I despise shipping outbound from Europe.  Sometimes it works, most times something gets hung up.  So anytime I can ship from the US instead I jump at it.

Up for swappage this time was 2 (well, sorta 2.5) power meters.  Hang tight, here’s the low-down..I’ll try and not lose you!

First was the Stages PM.  I had ordered (purchased) my own back in June following my updated Stages review being released.  It came in a few weeks ago and forwarded over last week.  So I’d be sending back the media trial unit as usual, and Stages was interested to see what 7 months of wear and tear looked like (no problems from my view). 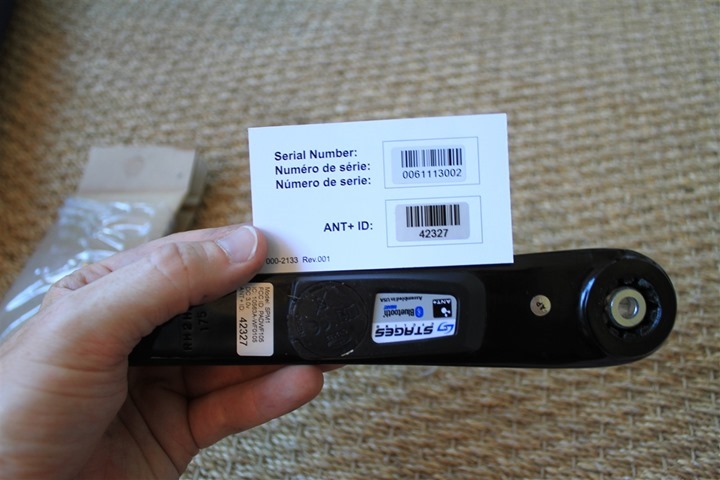 Second was the Quarq Riken.  This was sent out to replace my purchased Quarq Cinqo.  The 5-year old Cinqo went back in June to Quarq as a customer-service exchange given some of the drift issues they saw in it and wanted to investigate.  Since the Cinqo is discontinued, they swap those out for Riken’s these days.  That sorta works out for me since folks have been asking for a review there. 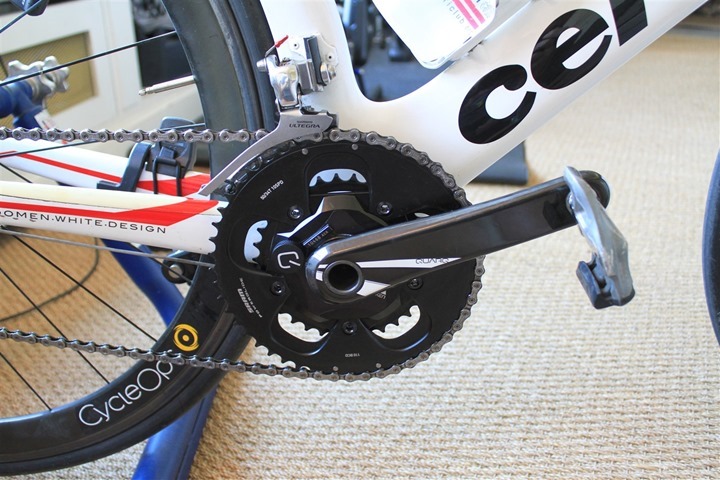 The Riken has been on my bike since June, and I’ve been collecting tons of data on it (along with the PowerTap and Stages).  At this point more than enough clean data for a review, which will show up in the coming week or so.  I’ll save you a surprise ending and say that short of me seeing something odd in a more-detailed analysis of the comparative, it worked great.

As I noted many of you have asked for a Riken review, but a number have also asked for an Elsa review.  So a couple weeks ago Quarq/SRAM sent one of those over for eventual review (the Elsa will go post-review as usual).  Thus, with my Riken data collected and done, it’s on to the Elsa (note that the Riken will ultimately go back on my bike as my permanent purchased crank-based power meter). 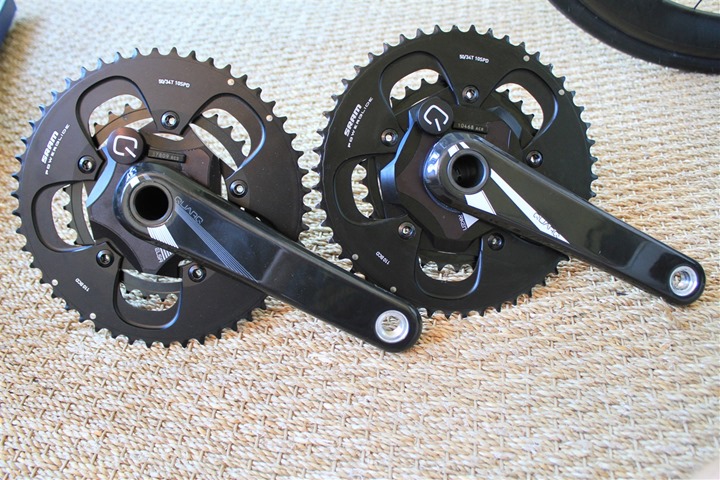 The main difference of note between the two units is that the Elsa transmits estimated left/right power data, sorta like the Quarq/SRAM Red unit that I’ve reviewed.  Whereas the Riken does not. 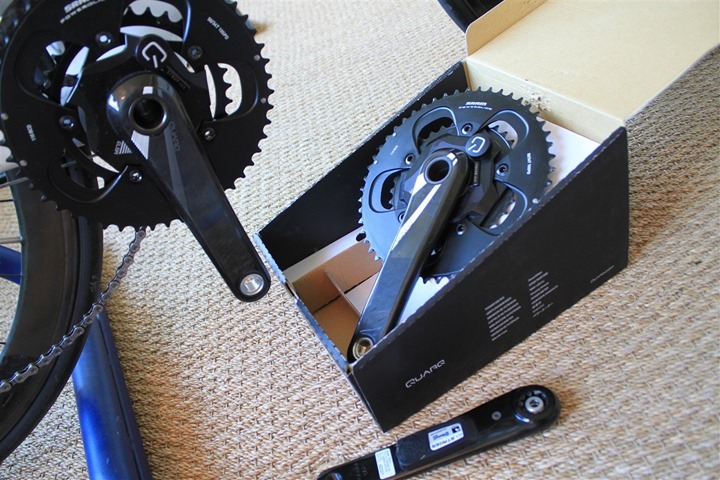 All of this swapping actually would have only taken about 3 minutes to complete, but since I was taking a slew of photos for reviews  – it took a bit longer. 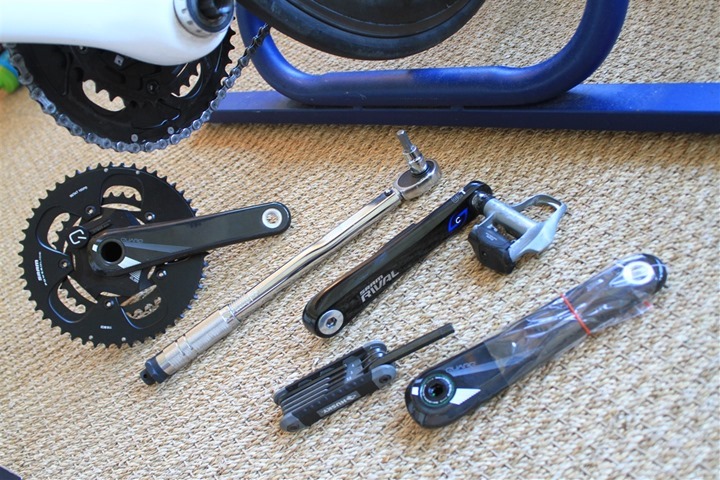 With everything done I then set about a trainer ride to get everything settled down on the Quarq.  It’s recommended to do a couple of standing sprint starts.  After about 10-15 minutes and a few hard short intervals later I had four power meters aligning in the ways I’d expect (Quarq highest, PowerTap, then CompuTrainer almost exactly mirroring PowerTap, and the Stages slightly lower than the Quarq).  And the calibration offset values settled down as well.  I’d do another test a bit later that night just to validate things.

Finally,  I mentioned “2.5 power meters” being swapped out.  The third will occur when I hit US soil, which is swapping out the PowerTap wheelset for a newer one.  Nothing wrong with it, just getting that back to them after some tests with it and finally picking up my purchased wheelset.  Again, a gazillion times easier (and cheaper!) to swap wheelsets in the US than ship them overseas.

With all my bike swappage done it was time to pack up the bike for my Sunday flights. 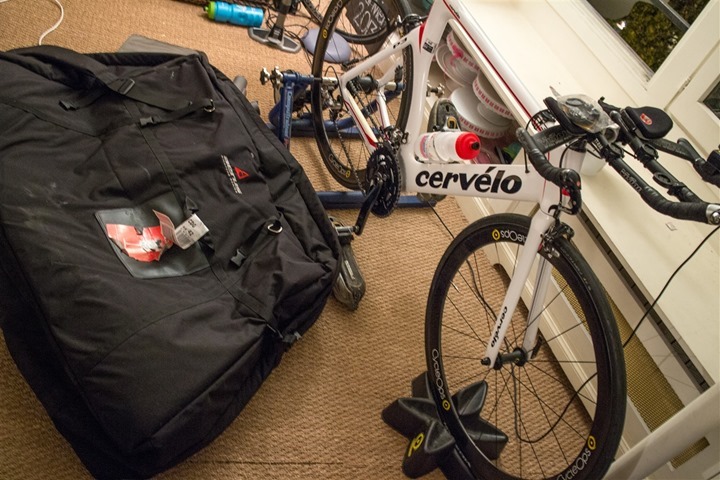 Generally speaking I’ve got this down to about 15-20 minutes.  Faster if I’m running late for a flight, slower if I’m watching TV at the same time (like last night).

Some of you recently have recently asked why it is often that my bike is on the CompuTrainer (as seen above), if I much prefer the Wahoo KICKR?  See, that’s the sign that you don’t have another triathlete/cyclist in your household.  Cause if you did you’d know that *cough* she *cough* would take the KICKR and declare it her own, for her bike, 24×7.  Thus, my bike is relegated to the CompuTrainer. 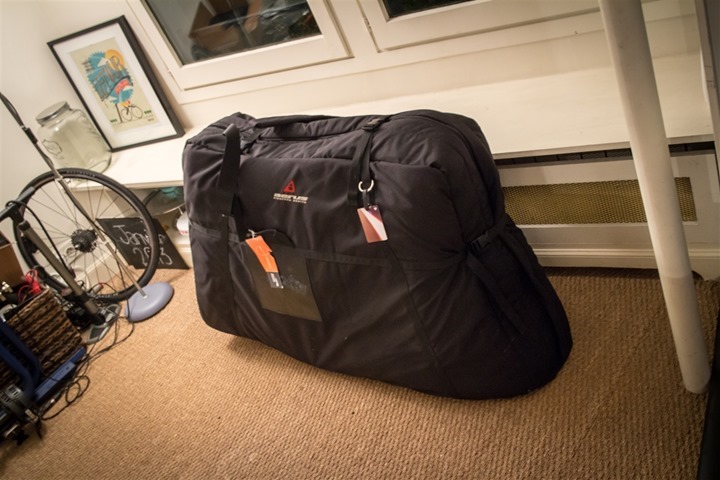 Oh, and check out that framed poster in the background.  The Girl gave it to me for my birthday last week.  It’s the 100th TdF Anniversary poster.  We had picked up the poster inside of it a few months back at a local sport clothing store here, and then she got it all ironed and framed.  Cool! 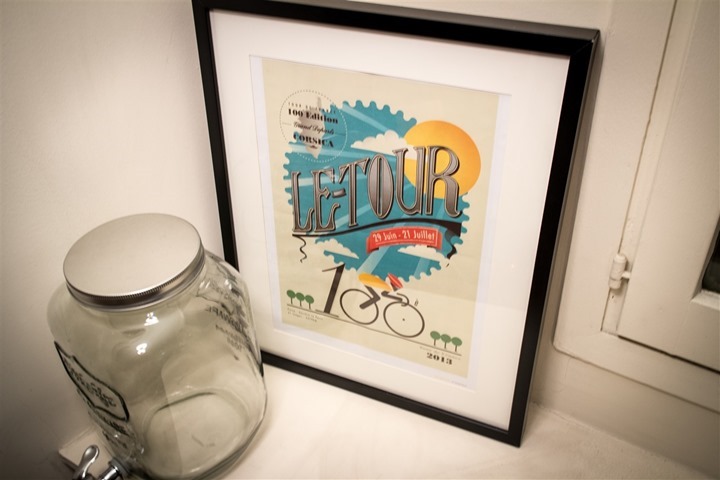 With my bike packed up I headed out to the airport Sunday morning for a few flights and 5,300 miles of flying.  The next few weeks are crazy with lots of hopping around.  But I’m looking forward to it! 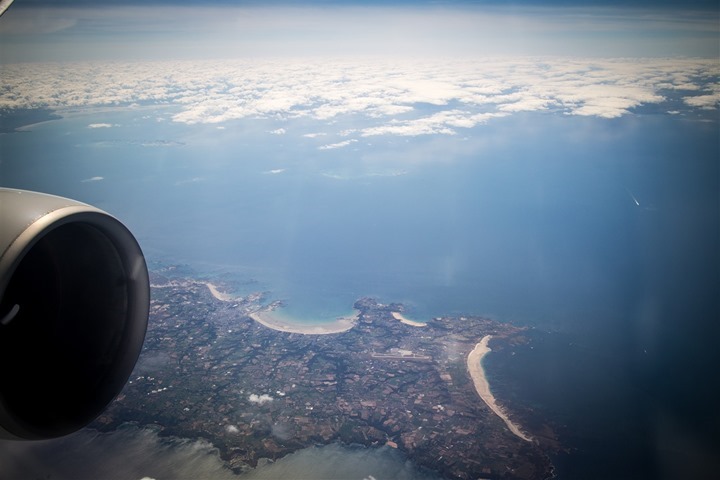