Top 10 Reasons I love running in the Washington DC area

Given how nice the weather has been here in DC the last few days, I figured it might be fun to highlight some of my favorite aspects of the DC metro area from a running perspective.  After all, that’s how I end up seeing so much of it – simply through my long runs!

Here’s my top 10 list of things that I love about living and running in the DC metro area, enjoy!

1) Running during the Cherry Blossom Festival 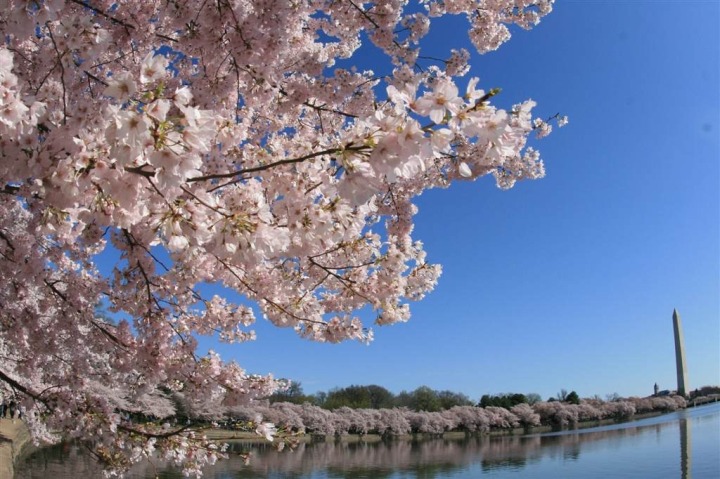 (The Tidal Basin, taken during the Cherry Blossom Festival)

While there is the Cherry Blossom 10-Miler race itself, I instead spend my time running around the Tidal Basin as soon as the cherry trees start blooming. In fact, just next weekend I’ll be doing that. The cherry trees are expected to bloom far earlier than normal this year (March 24th, versus the usual around April 4th). So I’ll be timing any and all runs that I can to doing so around the tidal basin.

While running during the busiest times of the day on the Cherry Blossom weekends can be a bit tough, if you get up early enough there’s miles of pink and white trees to enjoy basking under (include Haines Point for a slightly longer route).

2) Running by the monuments any day or time you want 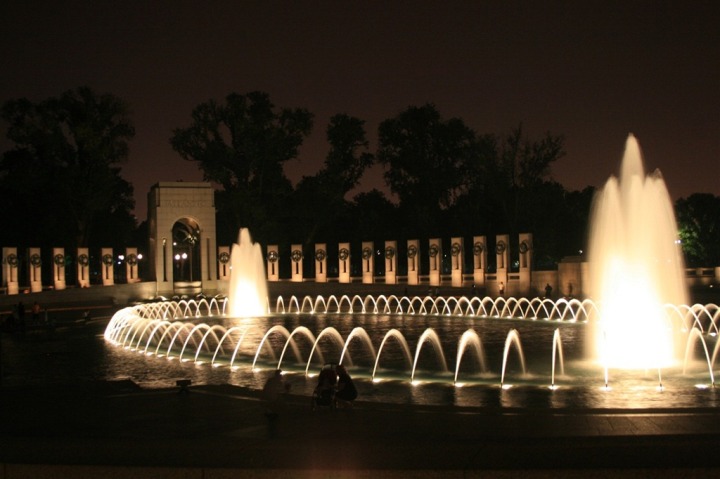 It’s funny, I see the monuments almost every day, depending on where I’m working that day.  Yet, it never really gets old.  There’s something just downright cool about running next to the Washington Monument and being in the epicenter of the Mall with the Lincoln and the World War II Memorial behind you, the Capitol ahead of you, the White House to your left, and Jefferson to your right.  Really an amazing city, and it’s best seen at night – via running.

But while the bigger monuments are impressive, the even cooler part is running past all the smaller ones that folks aren’t as aware of.  For example, the World War I memorial off to the side of the Reflecting Pool, or past the FDR Memorial at night.

3)  A never ending network of running paths and trail 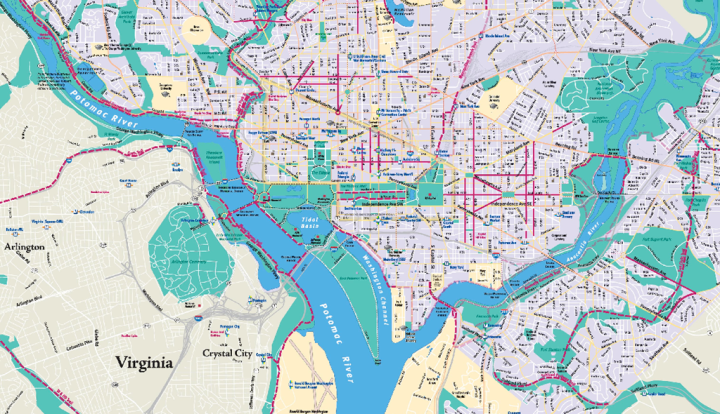 Most cities have a handful of major running paths that you’ll find majority of runners on, on any given weekend.  But with DC – there are so many paths that it’s mind boggling.  And best of all, most of them connect together in some way.  On a typical 20-mile run I may go through half a dozen major trails/bike paths, connecting them together like intertwined strings of spaghetti.  For example, I may start out on the Cameron Run Trail, then connect to the Mt. Vernon Trail, then to Four Mile Run, then the W&OD Trail, up to Custis, and back down into the Mall.  All major trails unto themselves with tons runners on them (now, only if they all had water fountains…).

4) It’s still sunny in the winter 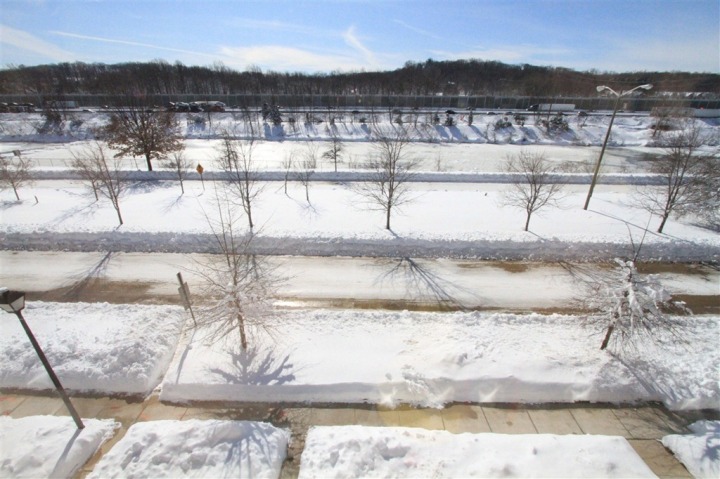 (After a snowstorm, the view from my house)

It’s funny, you’d think that since I was born and raised in Seattle, I’d be totally used to rain.  And in a way, that’s very true (no, I don’t use an umbrella).  But over the last 8 years of living here in DC, I’ve somewhat become spoiled by the sun.  See, in Seattle, you generally only see significant chunks of sun between June and August.  Outside of that, it’s mostly liquid sunshine.  But in DC, even on the coldest winter days – it’s usually sunny out.  So when I go back to Seattle and it’s a bit wet and cold most days, it takes some getting used to.

Sure, we still get rain, and unlike Seattle – when it dumps here, it REALLY dumps.  But, for the most part the number of days I have to run in the cold rain is much smaller in DC.  And even when it snows, usually the next day it’s sunny and the world is ready for running.

5) A significant number of huge and well supported races 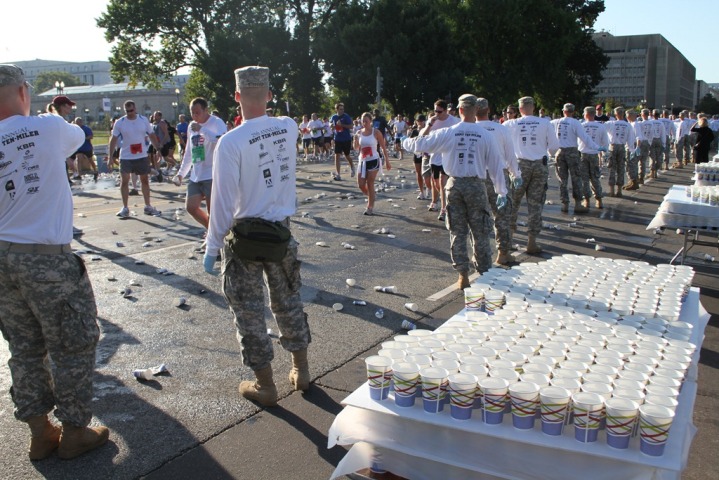 (The Army 10-Miler, at one of the aide stations right in front of the Capitol building)

There are very few cities in the world that have as many ‘major’ road running races as Washington DC. We’ve got quite a few in the over 10,000 person category, including the Cherry Blossom 10-Miler, Army 10-Miler, Marine Corps Marathon, National Half/Full Marathon (now, Rock n’ Roll DC). Plus, a whole slew more in the just under 10,000 arena, like the GW Parkway 10-Miler.

Each one of these events is not only huge, but also really well supported. You can’t beat the Marines out there supporting folks in October for the Marine Corps Marathon (or the Army folks for the Army 10-miler). And it’s even more motivational and inspirational to run behind some of the soldiers during the race and see the messages of why they’re running.

6) And there’s a ton of smaller running races 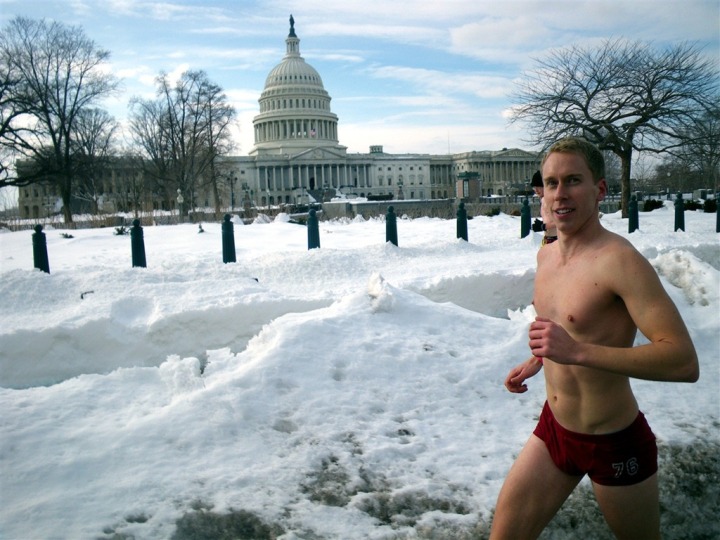 (Good friend Rob as we ran in the Cupids Underwear Run)

While I noted the bigger races – there’s an endless number of smaller ones.  A quick glance at the local running calendar shows there’s literally at least a couple of races in the DC metro area every single weekend of the year.  It’s really rather crazy actually.  You’ve got everything from Turkey Trots to Cupid Runs to Jingle Bell runs – just a boat full of races.  In fact, my very first running race (a 10K) was a smaller race organized on the route in front of my house.  All I remember about that race was that it was very hot, very humid, and I probably was in over my head comparative to my training at the time (I had just started running about a month and a half earlier).  Final time was 54 minutes…I’ve made quite a bit of progress since then.

7) Running from my front door onto a trail 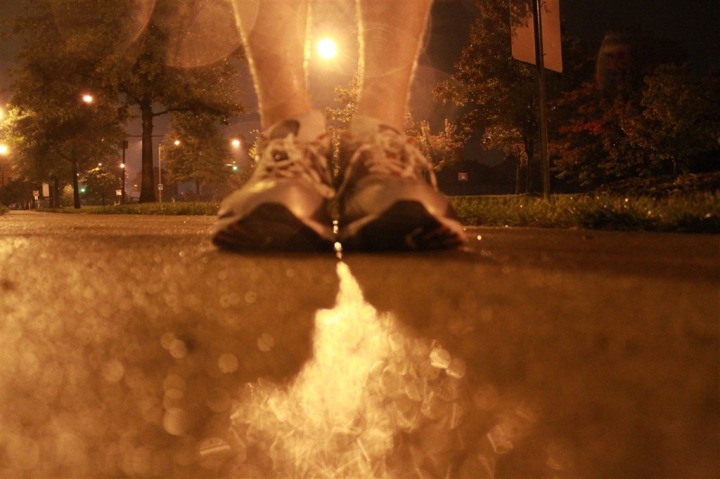 (Ready to run, directly in front of my place)

When I first bought this house almost exactly 8 years ago, I wasn’t into running…or cycling…or really anything that involved self propelled movement across great distances.  So at the time I didn’t exact think much of the running path that was literally at my doorstep.  Well technically there are two paths, one about 10 feet from my doorbell, and a second, across the street.  They parallel each other for a few miles before merging together as part of a much longer trail network.

At any rate, from a runners perspective, I’ve got one of the best places on earth for creating interesting and unique runs on a daily basis where I never have to wait for a single car to pass.  It’s awesome.  Clearly, the next time I move I’ll be on the lookout for such a path.

8) A number of great running groups 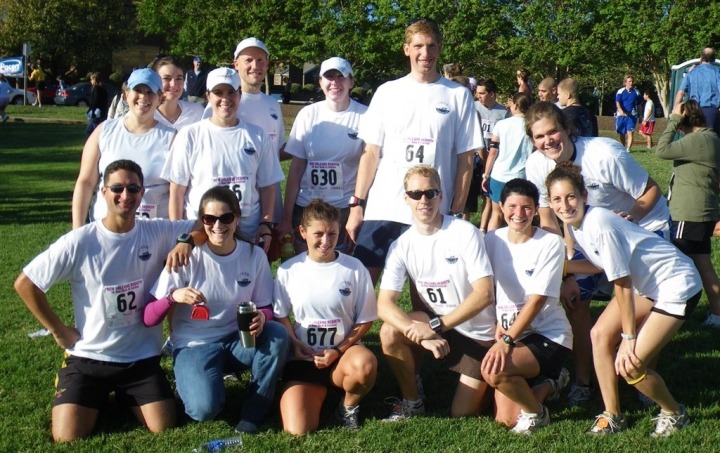 Many cities have running clubs, but not every city has one where you meet your wife on a run in a running group.  But that’s exactly what happened with me.  While my schedule has been a bit busier of late, I’ve long since run with the Old Town Pacers group.  I started with their Tuesday and Thursday evening runs, and then quickly got hooked on their Saturday long runs as well.  Ultimately, many of these folks became some of my best friends.  And in the case of one very special person – The Girl – she became my very best friend.

Of course, even if you don’t end up getting married, the slew of running groups in the DC area is amazing, from Pacers to Capital Striders to Georgetown Road Runners, and on and on… 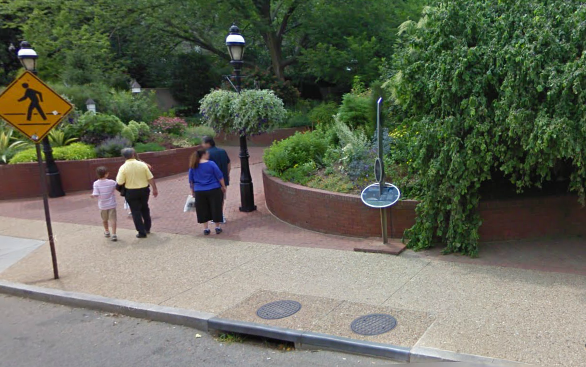 (Ok, Pluto is actually a few hundred yards away, but the Google Streetview photo of him has a bunch of tourists checking him out.)

Yes, seriously, Pluto.  And Jupiter, and Uranus.  See, starting in front of the Smithsonian Air and Space museum they have each of the planets in our solar system proportionally spaced.  It starts off all within a dozen yards with the Sun, Mercury, Venus and Earth – but as you work your way through the planets the distances grow quite large.  A number of blocks later large, before you finally arrive at Pluto.  About a 1/3rd of a mile or so down the Mall.

And while I realize that Pluto isn’t officially a planet these days, it’s still neat seeing him – and putting in perspective just how far away from Earth he is via run intervals, is kinda cool.

10)  Every once in a while, you run into the President (or someone’s president) 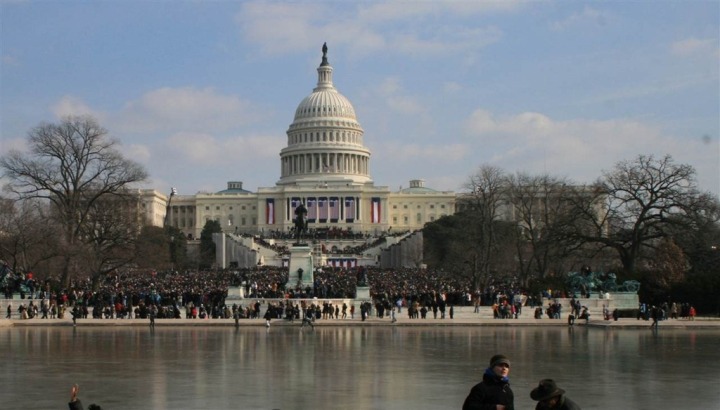 (Running to catch the Presidential Inauguration)

While it doesn’t happen every day on my runs, I have actually had the Presidential motorcade wander on by mid-run.  Unfortunately, none of those times I had my camera with me.  Far more common though is seeing someone else’s president drive on by, or someone else of significant political importance.  It’s always kinda a neat reminder of the city you live in that it happens so frequently that many locals don’t think twice about it.  But for me (and I suspect at least most tourists), it’s still a neat sight to see.

Additionally, even though I didn’t dare try to officially schedule a run during the most recent inauguration – I was able to check it out.  Though, ironically enough – in order to get in via an alternate route, we had to do a wee bit of running ourselves to make it in time.  Funny how those  things happen.

So, for those locals in DC (or those who have visited), what’s your favorite part of running in DC?  I’d love to hear, especially if it’s something that I may be missing out on!