Observations on training over the last month

I was going to talk about my excitement filled 8-mile treadmill run this evening and all the logic behind doing it indoors versus outdoors, but I wanted to first go through some random observational bullet points around training and fitness related to the last four weeks.  After I ended up writing these out, I decided that in the end – the 8-mile treadmill piece wasn’t quite as interesting anymore.

So, with that said – here’s a smattering of bullet points that when put together I found interesting, in chronological order:

– My last race was Sunday, June 19th – the DC Triathlon.  Albeit just a few days after a crazy week starting with the Boise 70.3 race and then including a bunch of really painful riding in Colorado, I still did fairly well.  This would be my last triathlon of the season, as I’m shifting over to predominantly running as I train for the Philadelphia Marathon.

– Previous to the honeymoon in the week leading up to the wedding I did approximately zero official ‘training’.  Now, I did do a significant amount of running around, though very little while donning running equipment.  See, the resort we were at for the wedding was about 1 square mile, and my room was at the complete opposite end of everything – so I probably speed walked about 5-8 miles a day.  Though, there’s not a ‘speed walk’ category in Training Peaks, so I omitted this in my training log.  There’s also not a ‘dance’ category, thus I couldn’t put those in there either – that’s like 8-9 minutes in total between the Mother/Son dance and the Bride/Groom first couple dance.  This would have significantly changed my totals for that week…at least from a percentage standpoint.

– Over the course of the two week honeymoon we ran, stationary biked, or spin biked about every 2nd or 3rd day. None of these efforts lasted more than about 45-50 minutes, most done at an easy conversational effort. Though this would exclude the first 4 days of the honeymoon…where we did nothing more than eat and sleep on the beach.  From a training standpoint we both had agreed that if we felt like doing something during the honeymoon, we would – but we wouldn’t force ourselves to train either.  We did have intentions on running longer (10-14 miles) every week – but somehow that didn’t quite come to fruition. 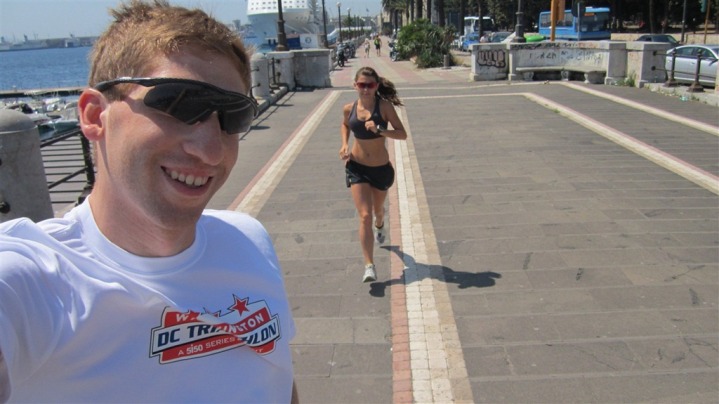 (That’s us, going for a run in Sicily, with the ship visible in the background there.  I look all goofy when I try and take a picture of myself while running…yet she looks all athletic modelesque. Not fair.)

– As I alluded to in my previous posts, during the honeymoon we ate a lot of food.  Like, more food than I think I’ve ever ate over a sustained continuous period of time.  The two of us really displayed some impressive eating capabilities – 3+ trips to the ice cream buffet per day, ordering multiple entrees, etc…  Simply because it’s fun to enjoy the experience.

So with that all in mind, both of us were a wee bit leery to step on the scale upon our return.  So much so that I waited an extra 24 hours simply in hopes that the number might be a smidge less (but I did eat normally during that 24hr timeframe).  The Girl did not wait this extra time prior to visiting Mr. Withings.

Thus, here’s the kicker: She weighed the exact same.  And me?  I weighed less than a pound more than before – all within the range of a day to day fluctuation (I can fluctuate 2-4 pounds on a day to day basis, though I do my normal ‘weigh-in’ at the same time each morning).  Hence there was a bit of shock when we compared notes about our weight.  We watch our food increda-carefully while at home…train a ton…yet stay roughly the same weight-wise year round.  Meanwhile, we then go on a 10 night cruise, eat anything and everything that didn’t move, don’t train a bunch…and end up at the same weight. 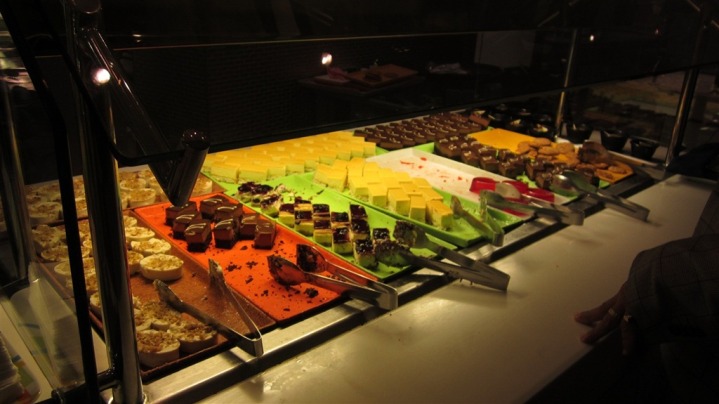 (Midnight run to the dessert station…picture taken at 12:21AM to be exact)

Clearly, my game plan now is going to change given this new revelation.  I found that I can actually order a buffet station off of Amazon, and even a soft serve ice cream machine (well actually, I tried adding that soft serve ice cream machine to the Wedding Registry a while back…The Girl vetoed it. Sad Panda.).  But I’m still vying to recreate the entire cruise ship buffet setup in our kitchen – including both the man making the sushi, and the guys making pizza.  Given the costs, at this juncture I see the Gyro machine as optional, unless the Greek guy is there too.

Of course there were also probably some body fat to muscle changes that occurred that could shift weight distribution wise – though the electrical impulse body fat scale doesn’t seem to indicate so (to the degree of accuracy that you wish to trust that component of it).

Now from a training standpoint, there’s no doubt that the lack of high intensity and longer duration training certainly will have a small short term dent in my overall progress to the Philly Marathon – but those were both life decisions I’m relatively certain that we’re both fine with (especially in relation to the Pistachio Gelato).  I’m exactly four months out from Philly as of this evening – and based on my run earlier this evening, I’m not seeing any major loss of fitness over the last few weeks.  Simple maintenance runs can go a long way to keeping things from falling apart.

Given all of that, that’s actually one reason that I selected to do my hour long run indoors this evening on a treadmill, as opposed to outside.  See, had I done it outside in the extreme heat and humidity, I wouldn’t have a good useable indicator on my current level of fitness.  This would be because the heat and humidity would likely deteriorate my paces (based on HR zones) far more significantly than my fitness may or may not indicate.  But by running in the relatively constant indoor conditions, I can get a rough idea of my current level of fitness based on paces to effort/HR’s.  Further, by avoiding outside on extremely hot days I can speed up my recovery since my hydration level loss will be significantly less.  And given I’m just coming off flights from across the pond, with more travel scheduled constantly over the next month – any break I can give my body…the better.

Speaking of breaks…I’ll give you a break now too…thanks for reading!