How to travel (a lot) and still eat (mostly) healthy 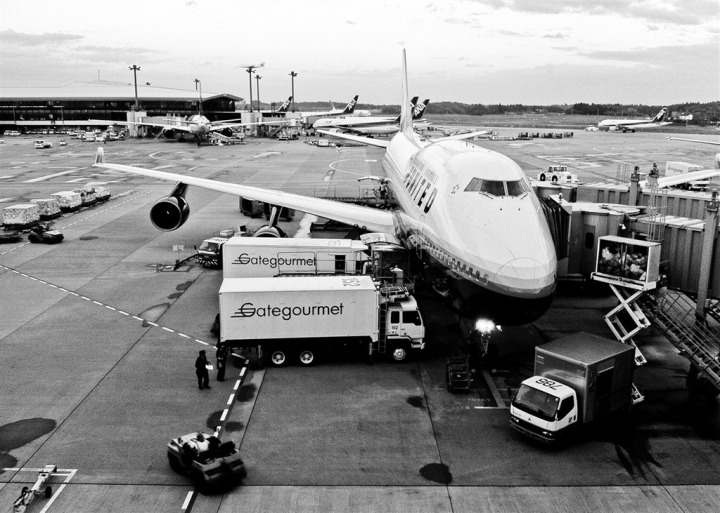 I’ve talked in the past a bit about nutrition and how I balance my desire to eat everything that looks great with attempting to be healthy in my choices.  Yet how does that jive with all the travel I do for work?  I’ve traveled no less than 100,000 miles every year for the past decade, with most years averaging between 125,000 and 250,000 miles of actual butt in seat flying. Thus I often get asked how I balance all the travel I do with eating healthy while on the road.

In general you can actually break this down into two basic areas, those travel days that involve flights and those once you’re at the destination city/location. There’s also the aspect of whether or not you’re living out of a hotel or with family/friends.

There are pro’s and con’s to each.  With a hotel you can achieve a higher level of control, but you may be facing portions which are exaggerated.  Whereas with family/friends you lose some control being a guest in their house, but you may find normal-sized portions.

Keep in mind that I’m aiming this post primarily towards the business traveler, and not as much one who’s on vacation.  After all – if you’re on vacation – enjoy it…enjoy life!  But, let’s dive into some of the things I do to manage my life on the road – both domestically and internationally.

Drink water. No, seriously…this is the single biggest tip I can stress.  Drink water till the cows come home on the plane.  It should be noted that I love diet soda, especially Diet Coke.  However, once you start down that trail while on flight days it’s a slippery slope to both dehydration but more importantly wanting to eat more.

I grab a slightly larger water bottle post-security and make it a goal to drink the whole thing by the end of the flight. By drinking the water you’ll feel fuller, it’ll protect you against dehydration and it helps against jet-lag (note: that doesn’t count if you fly from Washington DC to New York City, you don’t get to claim that benefit then). 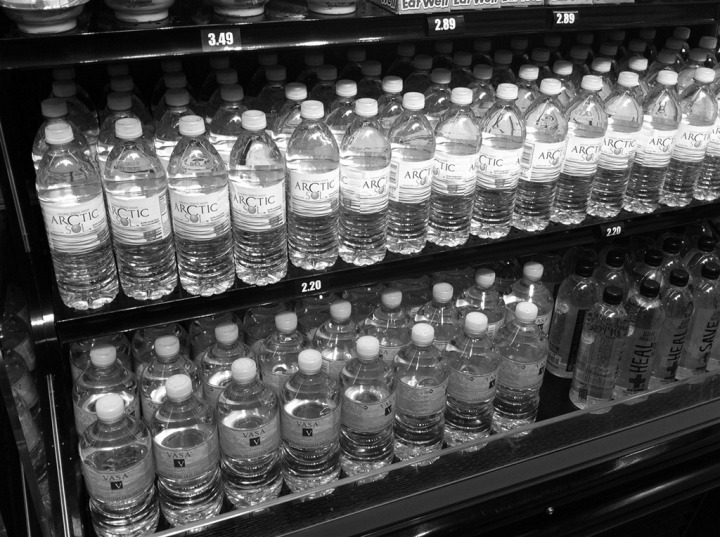 The second biggest item I try and focus on is timing meals to a time zone.  It doesn’t matter which time zone you choose to be honest, as long as you plan on sticking with it for a few days.  This means that if your flight leaves the east coast at 6AM and arrives at 10AM on the west coast – don’t eat a pre-flight breakfast, food on the plane, a snack upon arrival and then lunch again two hours later.  Just pick one breakfast and stick with it.

Personally I prefer for morning flights to the West Coast to simply grab a bigger bagel/cream cheese at the airport just prior to the flight and take it with me. Many airlines today offer snack options you can buy onboard.  Some are horribly bad, yet some are actually pretty healthy.

For example – US Airways has this cookie that you can get.  It clocks in at nearly 500 calories.  That’s about 9” of a Subway sandwich, and the cookie won’t even fill you up.  Meanwhile, United has a healthy snack pack with things like Olives and the like – and it’s actually pretty healthy and can fill you up for less calories and fat.  And finally, if you fly Continental Micronesia (now officially Continental and almost now officially United) around Guam, you get a little bag of funny looking cookies. 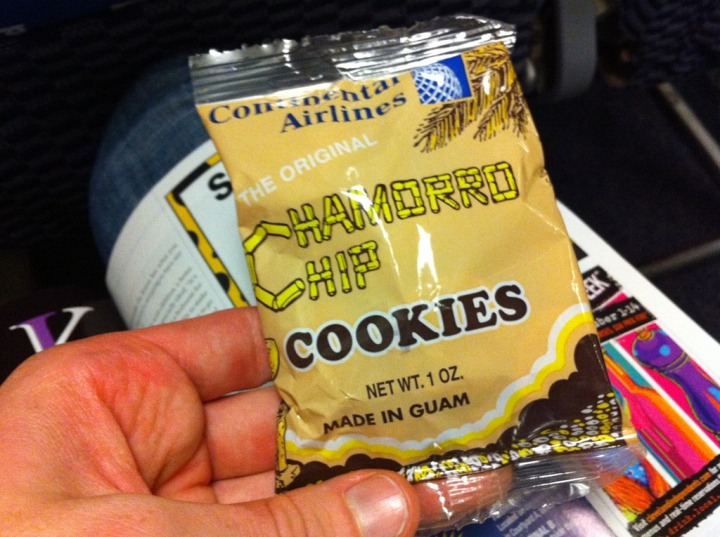 Finally, if you’re lucky enough to be flying business or first class – choose carefully.  Meals that include a protein like chicken or fish actually tend to be fairly healthy (fat/calories wise, sodium not-so-much).  Whereas the pastas tend to be smothered in cream sauces to keep them from drying out after potentially prolonged cooking times.

In the grand scheme of food while travelling, breakfast is by far the easiest to deal with.

However, assuming you’re at a hotel, breakfast can be an incredibly dangerous proposition.  Many hotels now have all-inclusive breakfast buffets filled with everything under the sun.  This is both a blessing and a curse.

On one hand, if you demonstrate restraint most of these buffets actually have very good healthy options like fruits and yogurts.  You can easily grab a bowl of simple cereal, or get a few scrambled eggs made.

The challenge becomes the issue of ‘everything looks good’ – which means that before you know it you’ve downed a 1,000+ calorie breakfast consisting of a bagel with cream cheese, some eggs, a bowl of yogurt, fresh juice and that cute looking chocolate chip muffin you grabbed on your way out.

Simply walk to the breakfast buffet with a known plan for what you’re going to get.  In my case, it’s usually simply a bagel + cream cheese, and then an orange juice.  That’s it.  Have a plan, and execute on it. 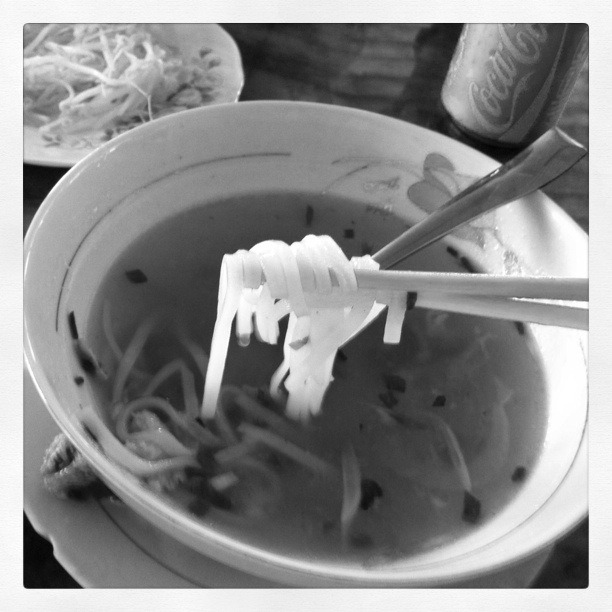 Thus, I find that lunch is one of the areas where your daily nutrition plan can easily go from hero to zero.  While your co-workers are pondering whether to choose between TGIF and Baja Fresh, you’re watching any attempt at healthy eating sliding away.

That’s why I go preemptive.

I simply strike before the conversation even occurs.  I’ll make suggestions that offer me something I can reasonably eat (sandwiches, salads, soups, low-fat options), or I’ll suggest locations that offer both them and myself eating options.  For example, a plaza, food court, or strip mall with a wide variety of selections.  Knowing what your co-workers prefer can help in swaying their decisions.  Offer them something they like and you’ve got control.  Offer them something they don’t and you’re back at the negotiating table. 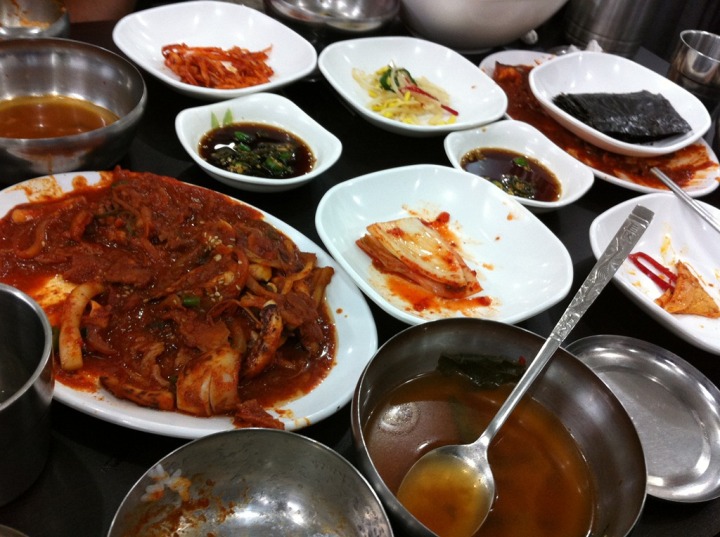 (Lunch at a small hole in the wall place in Seoul, South Korea.  I honestly have no idea what I ate…but it was good!  The next day I was eating live octopus though.  That I do know.)

Oh – and my favorite tactic to winning the lunch battle?  When all else fails, simply claim that I have to be back quickly because I’m/we’re swamped with stuff to do.  This is actually accurate about 99% of the time.  I find that in general if I end up at a sit-down place, the calories explode, whereas if I’m at a quick sandwich shop I can easily keep things in check.

If I’m travelling internationally I tend to try and eat ‘locally’ either for lunch or dinner – but not both.  The reason is that with the exception of Asia most local ‘favorites’ tend to not be terribly healthy.  This is of course using a very broad brush – but in general, based on my travelling, people of all cultures are drawn to foods with the most taste – and historically that taste is driven by ingredients such as sugars and butters.

For me, I try and balance my dinners on the road with broadening my food horizons in local foods.  While you could choose to do this with both lunch and dinner, I think that offers too much opportunity for going astray.  So I prefer dinner because the choices tend to be broader and usually better (especially for regional foods that cook all day). 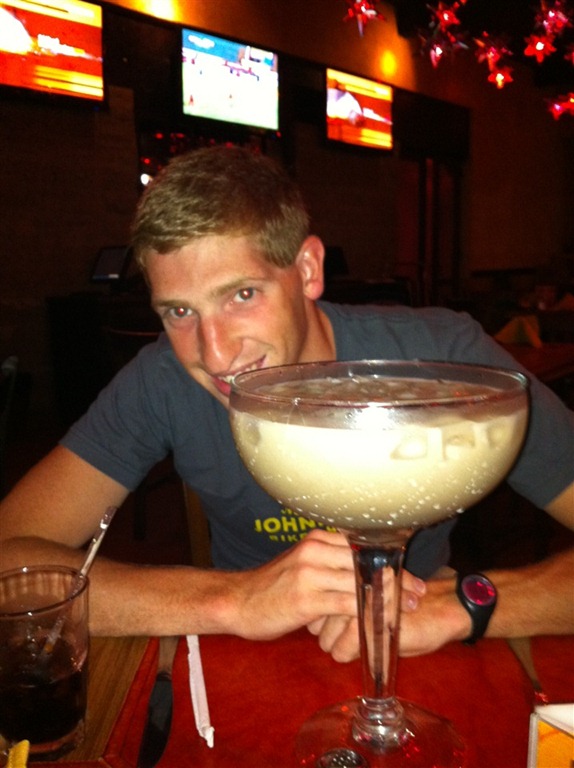 (For the record, that drink above is in Tegucigalpa and is Horchata…which…got me well hydrated after a long treadmill run)

But I’m not going to feast every night.   For example, most of my international trips are between 7 and 10 days.  If I ate great local foods every night – I’d come back looking like Violet in Charlie and the Chocolate Factory.  So you’ve got to taper it.  Now, if you’re on a vacation – that’s a bit different.  Enjoy yourself.

But if you’re travelling for work and attempting to come back healthy, you’ve gotta find balance between enjoyment of food and keeping fit.

I find that you can use many of the same lunch tactics for dinner as well.  Remember that he who strikes first usually wins the food choice argument (especially if you make a reservation).  But dinners tend to be different than lunch as most folks like to gather and be social for an extended time period – usually over food.  And, to make matters slightly worse – the larger the group the more lavish the food tends to be.  Smaller groups usually means fewer appetizers floating around the table. 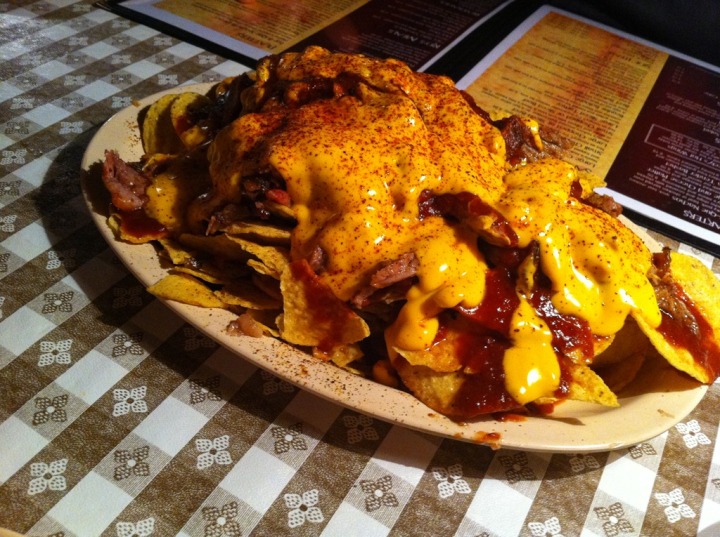 (An appetizer at a BBQ place in Memphis after the two-person dinner became more of a team dinner.  P.S. – It was awesome.)

Also beware of hotel room service.  In and of itself room service isn’t horrible, but oftentimes you find yourself picking more courses off the menu than you might otherwise choose merely because if you do ‘happen’ to get hungry enough to eat them you won’t have to wait another 30-45 minutes for room service.  Of course, once it does arrive you don’t want it to go to waste…so you eat it all as fast as you can before it gets too cold or too hot (ice cream).

The other area I try and focus on is getting my workout done pre-dinner.  I’ve found that most co-workers are surprisingly happy to go take 1-2 hours of downtime in their rooms after a long day.  Look to use that time to go workout.

I make it a goal to be in and out of my hotel room on the way to a gym after a long workday in a matter of a couple minutes – no time to sit around and ponder delaying until later.  If I’ve got two workouts to do that day, then I’ll do one pre-breakfast, and one pre-dinner.

While you’re travelling the world you’re given the opportunity to try out all sorts of great foods.  Some of those foods are good for you, and some of them…not so much.  Remember that in life there’s a balance between everything.  It’s alright to indulge a bit on a trip – but balance that out with some restraint in other areas of the day.  And above all…try and keep the gym a regular part of your routine while on the road.  If you need a bit of help with that area…wander on over to this past post.