If you like chocolate milk – I’ve got a deal for you.  You can drink more of it.  In fact, you can replace your after-workout recovery drink with it.  Cause it’s been scientifically proven to aide muscle recovery just as much as Gatorade.  A study published a while back in the International Journal of Sport Nutrition and Exercise Metabolism discusses the merits of chocolate milk over other sports recovery drinks.  Check this out:

“In the study, nine male cyclists rode until their muscles were depleted of energy, then rested four hours and biked again until exhaustion. During the rest period, the cyclists drank low-fat chocolate milk, Gatorade, or Endurox R4. During a second round of exercise, the cyclists who drank the chocolate milk were able to bike about 50% longer than those who drank Endurox, and about as long as those who drank the Gatorade.” (Article)

And it’s not just random scientists that’s drinking the stuff after workouts.  My former hometown University of Washington Huskies football team even uses it after every practice.  Each player is required to drink a small carton before leaving the field.

“The Huskies are experimenting with a new form of nutritional replacement following practices. Along with giving the usual water and sports drinks to rehydrate and replenish during grueling preseason practices, Washington’s football staff is requiring its players to drink a small carton of fat-free chocolate milk.

“It tastes good to me and, hey, if it’s nutritious and helps my body, I’m all for it,” wide receiver Cody Ellis said.” (Article)

So there ya have it – do you really need any more excuse now to down chocolate?

I’ve actually been using it since last summer and I’ve found it works pretty well.  While I can’t scientifically pinpoint chocolate milk as helping me personally to recover, I can say it seem to help…and heck – it certainly tastes better than some of the recovery drinks out there. 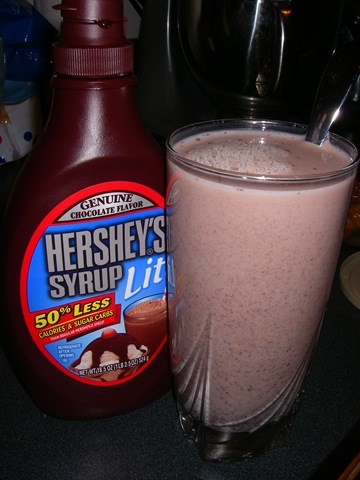 Speaking of which, I usually just make my own chocolate milk from Hershey’s Chocolate Syrup.  I recently noticed that they have a ‘Lite’ version that has 50% less calories.  I figured I’d give it a shot.  Based on my extensive testing (really, it was hard work!), it tastes the same.  The only interesting thing I’ve noticed is that it doesn’t seem to mix as easily as the regular stuff.  Meaning, it takes a bit more oomph to get it to mix ‘cleanly’ into the chocolate milk.  Ya know…like 4-5 more seconds of work.  Just in case you were curious about the difference between the two options.

So go forth and drink thy chocolate milk!