It’s that time of year where the most popular triathlons for next year start to open…and sell out just as quickly.  The first wave of these starts later this week, with many of the other big names occurring over the next 6 weeks into mid-December.

First up is the Nautica New York City Triathlon, which is one of the biggest and most popular Olympic distance races out there.  Some of you may remember I raced it this past year back in July.  And I also ‘competed’ in the always entertaining NYC Tri Underwear Run that’s tied to that event.

I had a great time (at both) and would definitely recommend folks do the race at least once.  If you have a time that qualifies you for the elite wave – I suggest you choose that over the later waves, purely for the purpose of avoiding the crowds.  Well, that and the dive start. 😉

Speaking of early starts…if you’re a USAT member, then I strongly encourage you to take advantage of USAT’s early entry program.  Regular entry used to sell out in 8-12 minutes when it opened at midnight, this year they’re switching to a lottery system for regular entry.  You REALLY don’t want to be battling that out then if you can avoid it…because more than likely…you’ll lose out.

For those who don’t read their USAT spam e-mails, you can find all the details of the NYC early registration here.

Next up in the pile is a slew of Ironman 70.3 races for next year that just opened.  While none of these are ones that typically sell out immediately, if you have cemented next year’s race plans, it doesn’t hurt to lock in your spot.  This is because majority of these races are newer, and thus tend to take a bit longer to sell out compared to some of the most well known and established 70.3 races like Ironman 70.3 California (another awesome race) – which tends to sell out very quickly.

One of the races that did open is the Ironman 70.3 Rhode Island (Providence), which I did the first two years it started.  I had a blast both years (despite blacking out at the finish and ending up in the med tent), and would recommend them to others.  It won’t be on my race list for next year…as I’ll be on my honeymoon then. 🙂 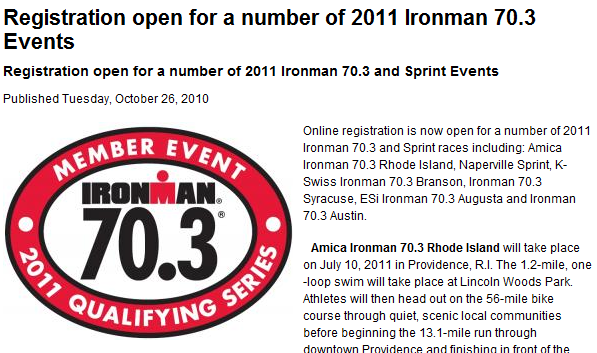 You can go get details of all the 70.3 races that have opened thus far, and sign your life away here.

And last but not least – a reader asked if I had tried out the new RoboMo RaceMate Marathon Corps Marathon App ($1.99), which is the official iPhone app of the Marine Corps Marathon.  So I went ahead and downloaded it and gave it a whirl.

The press releases and stories would lead you to believe that you’re getting a full featured tracking app that will help you to track racers on race day…but in reality when you boil it all down…you’re just getting a map of the course.  Well, that and a countdown clock to the start of the race.  Maybe it’s just me – but I’m fairly certain all those racing are Sunday are painfully/excitedly aware of exactly how far away Sunday is.

The makers claimed in a press release that some 47% of runners were expected to run with cell phones on Sunday.  I’m going to go ahead and call serious BS on that number.  There’s just no way I believe that 1 out of every 2 people will be carrying a cell phone running that course.

Here’s a couple of screenshots I took.  The apps includes a brief course overview (just like MapMyRun has for free): 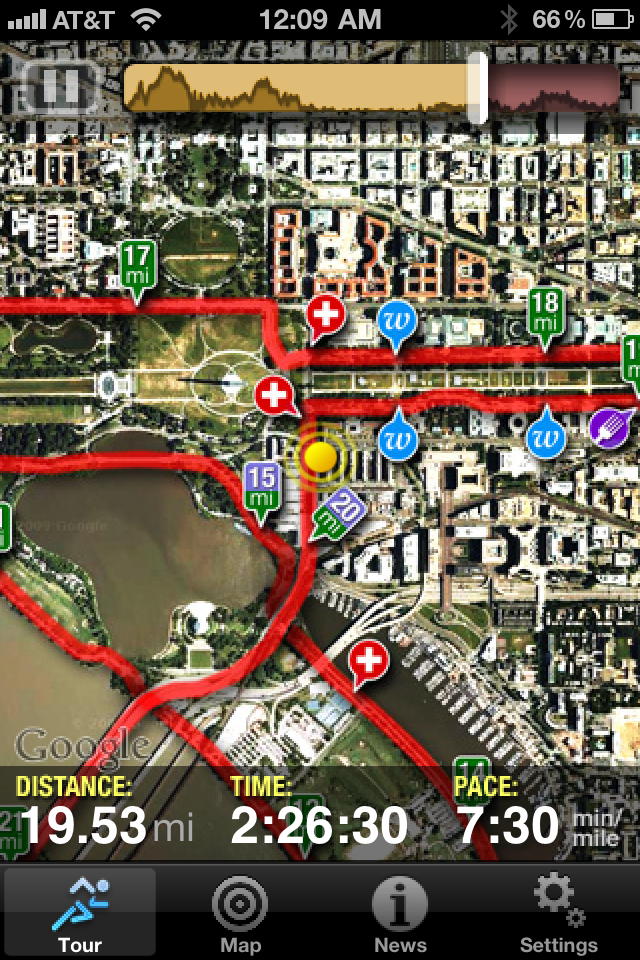 Then it includes a fully useless ‘News’ page with a whole two pieces of news…simply telling you that this app is designed for the Marine Corps Marathon: 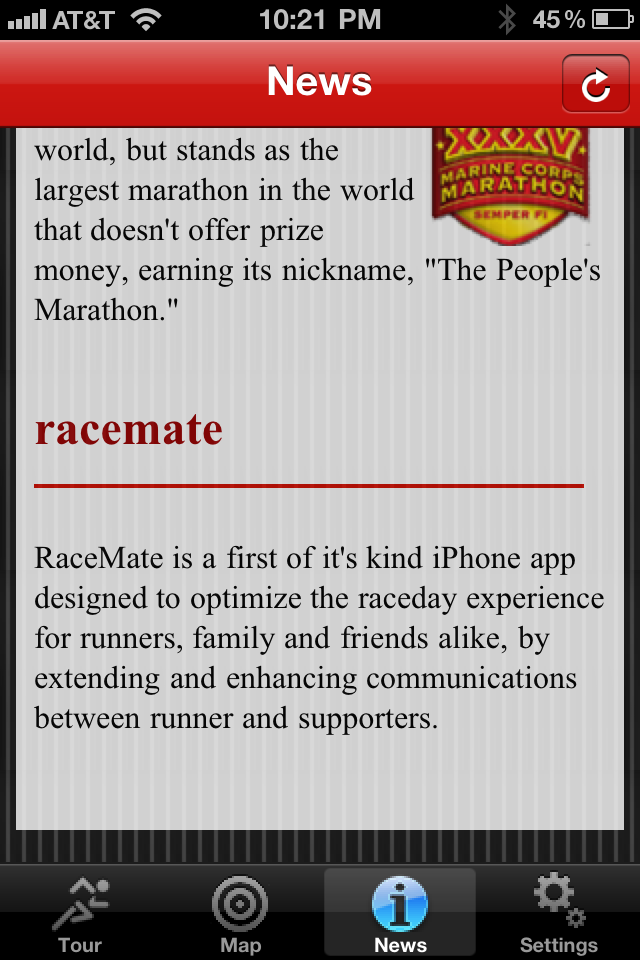 Followed up by a pace calculator page.  Given there are a million free pace calculators online, I’m not sure I see the value here for racers.  Perhaps a spectator, but realistically you’ll have given them paces anyway: 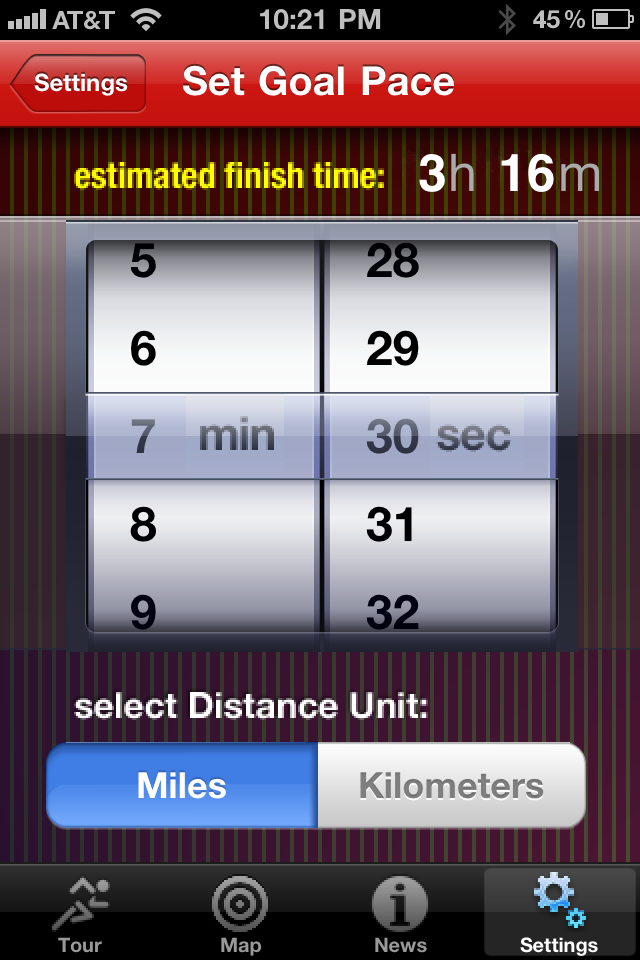 And finally, it includes a different map page, which also lists the water stops, bathroom, food, locations, etc…  This goes a step further and estimates where your friend is based on whatever pace they give to you pre-race – so this is semi-useful, assuming your friend is accurate with paces: 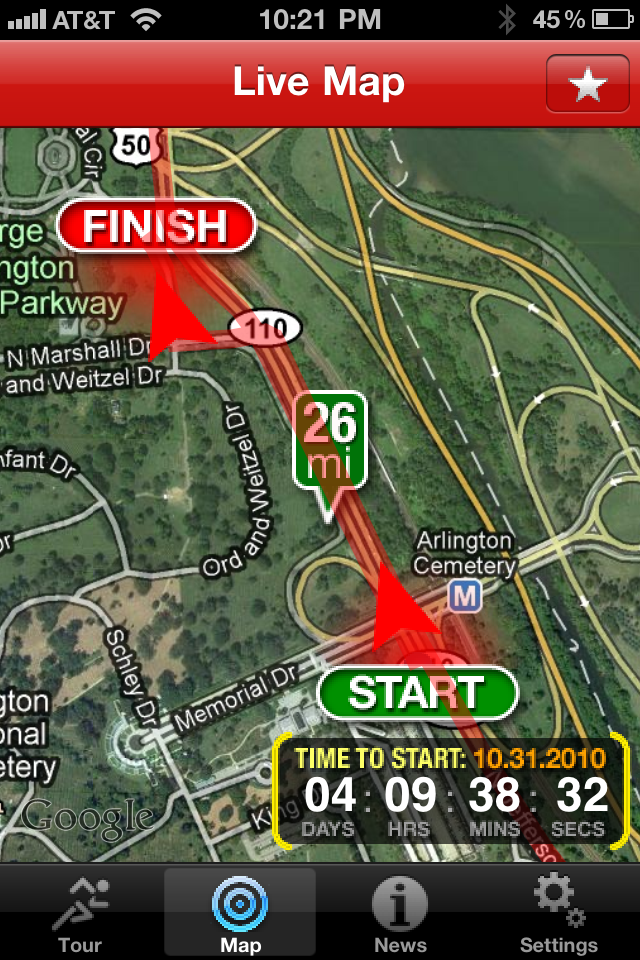 The makers of the app have been touting their app design is being used by a few other marathon’s this year, including the upcoming NYC Marathon.  This app could go from useless to useful with the simple addition of integrated tracking.  And perhaps they have something up their sleeve – but given it’s not listed on the makers website as a feature, and with the app store approval process taking upwards of a week – it doesn’t seem likely for Sunday.  If the app took mileage split data from the races website and integrated it into the little-man maps it includes and placed a runner for each runner you were following – it’d be super-awesome.  But it doesn’t do that.  Thus…not awesome.

What will however be awesome is my costume for Sunday.  I’ll be out Sunday morning cheering on runners, with The Girl – and both of us in costume.  Speaking of costumes, if you didn’t see The Girl’s post on her past costumes and the like…very.worth.while.