7:56AM – Sitting in the port-a-potty losing a pound or so.  The race starts in 4 minutes, about a quarter of a mile away.  Uhh…yeah.

But, we manage to make it to our spot near the 3:30ish marker just as the boom goes off commencing the start of the 32nd Marine Corps Marathon.  It actually ended up working really well, it was a nice warm-up run.  We had a few minutes until our area started advancing forward, enough to get comfy – but not enough to get nervous.  I was running with a friend from the Pacers running group I go to on Tu/Th/Sa, we are about the same pace – so it worked out well. 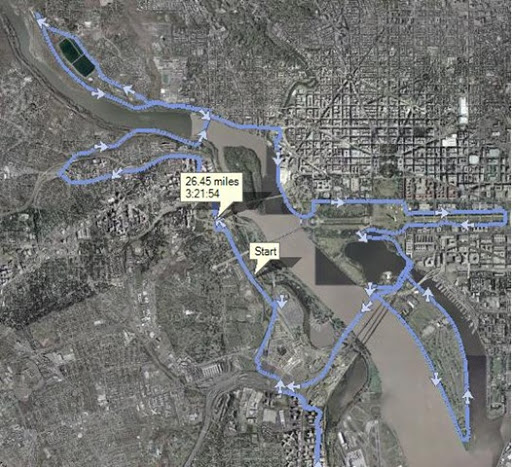 The first 8 miles were spent trying to slow down.  We targeting a sub-3:30 finish (8/mile pace), and we were continually pushing against a 7:10/mile pace, so I spent considerable effort slowing myself down.  I didn’t want to bonk by going out too fast.

The course changed this year, with the biggest change being the departure from Rock Creek and replacement with a section west of Georgetown strolling through some neighborhoods and up and down little hills, then finally back along the Potomac into lower Georgetown.  I liked this course MUCH more than last year’s course.  I find Rock Creek to be painfully ‘blah’, so the constant changing scenery of the hills and new cute neighborhoods was nice.

We swung back towards the memorials, past Kenny Center, around the backside of Lincoln towards the White House and then past the Washington Monument.  The crows were AMAZING this year, especially on the Mall.  It was incredible how big they were and it was lots of fun in a few sections where they had pushed the roadway down to only a lane or two for the runners with the crowd taking up the rest of the roadway.  Very cool.

Looping back around at the Capitol I swung through the 13.1 mile marker on pace with a 1:41 (7:40 pace).  Then out past the Smith’s and onto the basin.  It was near mile 14 that I saw Lessor handing out Gel’s.  Gave a quick shout-out and carried onwards towards the Jefferson Memorial.  Just outside of Jefferson was David, as promised.  Unfortunately I didn’t shout-out because I wasn’t sure it was him.  Sorry! From there it was onto to the most isolated portion of the course – Hains Point.  But unlike last year where it slaughtered me, I actually picked up pace a touch this time.

After Hains point I waived goodbye to the District and headed back to Virginia over the river.  There was some amazingly strong – but short and sharp – winds that whipped down a few of the streets in Crystal City – but it was a lot of fun in general in that area.  After the turnaround at mile 22, it was a short jaunt back past the Pentagon to the 26 mile marker, where the crowds were both deep – and crazy loud.  This is always my most favorite part of the course.  Some people hate the super-steep .2 mile hill section, but I love it.  I forget any pain I might have at this point and just let it loose.  Tons of fun.

We finished in a time of 3:21:47.  We drifted apart around mile 14 or so, with him about a hundred yards ahead me most of the time.  At each of the water stops I’d catch back up and then slowly separate again.  Around mile 24 I went ahead and closed the gap (per my mental plan).  We finished together which was cool especially since it was Rob’s first marathon (well, not holding hands…cause yeah – that would not send the right message). Awesome job he did!  Another friend of ours (Neil) that we run with all of the time at Pacers ran his own race, but only finished 15 seconds apart from us.  More awesomness! 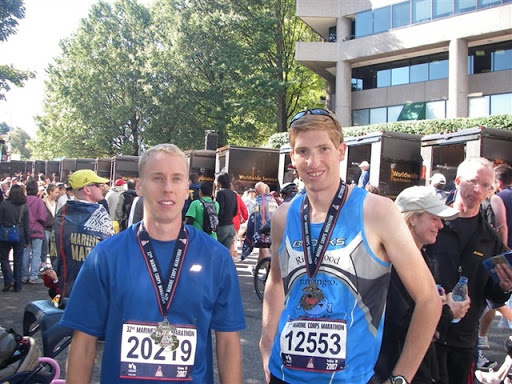 Post-race I waddled around.  My legs sorta hurt.  Actually, they hurt a fair bit at first, but have gotten better throughout the day.  I wasn’t physically tired at the completion of the race, just sore legs.  It probably didn’t help that I only did two long runs this season beyond 16 miles – and maxed out at 19 miles.  My tri schedule just shot to crap my long run marathon training schedule.

I went and did 1100 yards later this afternoon at the pool, mostly just to loosen up.  That helped quite a bit, I feel mostly good now.  I was going to go about 1500 yards, but then my foot and lower legs  started to seize up and so I called it quits before I got a full blown charliehorse.

I’m very happy with today’s results.  I shaved an hour off of my first marathon (MCM) last year.  And it’s only 11 minutes away from Boston qualifying for my age group.  Next year I think that’s easily achievable.  And don’t any of you try and sucker me into signing up for another marathon before Boston this year.  Nu-uh.  I shall resist. 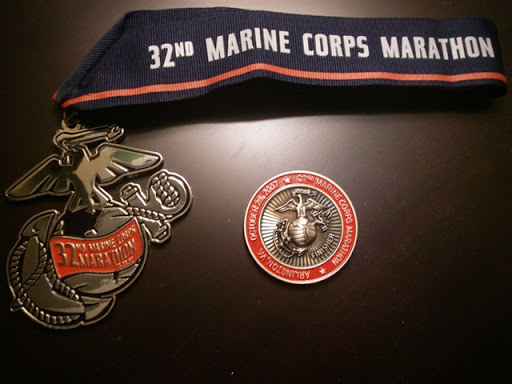