What is qualifying? The definitive guide to the biggies

Back a while ago, someone asked what all the hubbub was about ‘qualifying’ for various big events within the Triathlon or Running world.  So here’s the quick rundown of how it all works for the top events in each sport.  Let’s start with the easiest and most clear one first…

Aside from the Olympics and Olympic qualifying events, this is about as high as you get in the running totem pole world.  The good news is that unlike tri’s where your qualifying status is based against your competitors on any given day – Boston qualification is simply a race against yourself.  You hit the time, you’re in.  Done deal!

In the case of Boston, you need a certain qualifying time to be accepted.  Once you achieve that qualifying time you can run Boston* assuming it hasn’t filled up yet that year.  There are an assortment of age groups, and each one has different minimum times.  So, for a Male 18-35, the minimum time is 3:10:59.  If you get 3:11:00 – sorry, try again next year. 🙁

Here’s the table for Boston.  There are different age group standards for both male and female.  Update: Note, these have since changed since publishing 3+ years ago, see new times on BAA’s website. 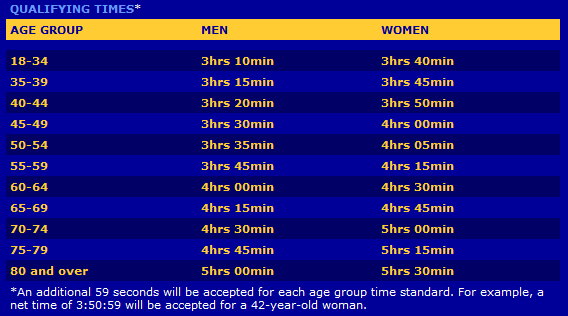 In a similar vain – there’s also something similar for another popular race – the New York Marathon.  Normally to race in the NY Marathon you enter a lottery where you roughly stand a 1 in 3 chance of getting in.  Though if you fail three years in a row, they’ll let ya in.  But in addition, there’s actually a guaranteed entry program as well – though the standards are pretty strict: 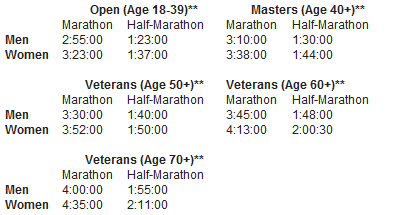 The good news with running through is that’s it’s a race against yourself – you don’t have to worry about competitors.  The same can’t be said for Tri’s…

*Nitpickers corner: Yes, you can run Boston as a fundraiser or with various event sponsors and not achieve a qualifying time.

First in the tri-category is the 70.3 level – which is the half-iron level.  These are held in Clearwater, FL each November and then broadcast during the winter on NBC.  In order to qualify for Clearwater you must race in any of the M-Dot (official Ironman) series 70.3 races.  There’s a few dozen of these around the world, with about 15 of them in the US.

Now, unlike Boston, you have to earn a ‘slot’.  A ‘slot’ is simply a ticket to go to Clearwater.  Slots are awarded via age groups, with each age group getting at least one slot.  Now, the number of slots varies from race to race based on the number of participants.  Meaning, a race with 2,000 people will have more slots than a race with 1,000 participants. As the 70.3 series has grown (more races), the number of slots per race has decreased.  For Rhode Island this year, there are 45 age group slots, and 5 pro slots.

These slots are then further subdivided based on the number of people in each age group.  So – the M30-35 age group is typically one of the largest, therefore it gets more slots (perhaps 4-6 per race), versus the F65+ category (maybe only one per race).  Now, if no racers in a given age group finish the race, then the slot is transferred to another age group (typically the largest age group within the same sex).  Though there are supposedly specific rules on this, I’ve found that in actuality the ‘handing down’ of extra slots is highly ‘flexible’.  For example, say nobody F60+ finishes or wants the slot in that age group (AG), that slot would then go to the next largest female group – such as F30-35.  Here’s the breakout for the 2009 Ironman 70.3 Rhode Island race, Clearwater slots (per the athlete guide PDF file): 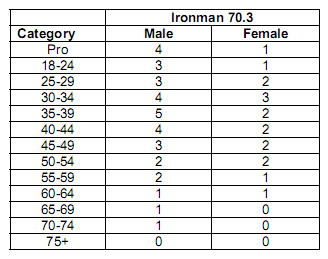 See, you don’t have to accept the slot.  Which then takes us to the roll down.  The roll down is the process by which people who don’t finish within the allocated number of slots can get a slot.  Say there are three slots available for the M25-29 AG.  The #1 and #2 persons accept the slot, but the #3 person declines.  The slot is then offered to the #4 person.  This is  done at the awards ceremony and you must be present to ‘win’.  If #4 person declines, then it goes to #5 and so on.  I’ve seen it go as far as #20.  The reason is because usually only the first 4-8 people hang around (if that), and so after that many have already gone home and thus the slot can slide quickly down the ranks.

So in summary – you basically have to be on the podium to get a guaranteed slot, or within the first 4-8 finishers for a realistic chance at a roll down slot.

The biggie in the tri world.  The one measuring stick that everyone seems to strive for.  And unless your 65+ or under 20, it’s the hardest one to get.  Known simply as “Kona” in tri-circles, but officially as the Ford Ironman World Championships, it’s the one tri event that most Americans have actually seen on TV at some point in their life via NBC’s annual coverage in mid-December (the race actually happens in October…btw, did you know that the corporation behind the Ironman race actually pays for the production of the NBC coverage, in the same manner as a paid 90 minute infomercial).

Kona slots work exactly the same as Clearwater slots.  For example, in the case of Ironman Canada, there are 72 slots allocated for 2009.

And here’s the official rule listing for how these are allocated: 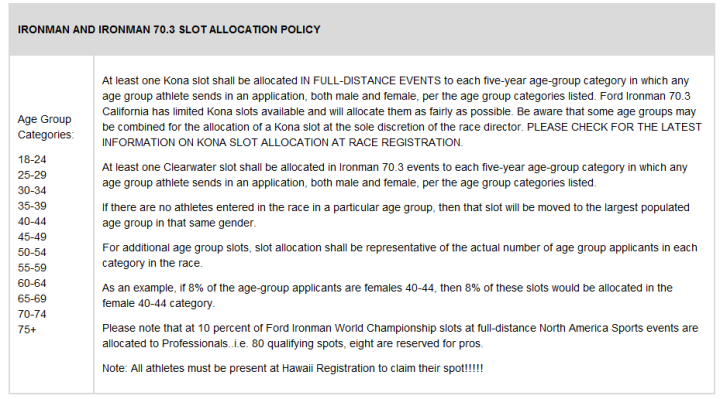 But, aside from the usual slot allocations and roll downs, there are also a few other ways to get into Kona (none of which are easy mind you).

Once you’ve managed to check at least one of the four boxes above – you can go ahead and book your ticket to Kona!

While all of the previous events I’ve mentioned focus on ‘long course’ type races – either a full or half-marathon included, there’s also focus on the Olympic distance (aka International Distance) races – a typical 1500M swim, 40K bike and 10K run.  While this is one of the most common distances that triathletes race during the course of the year, the ITU Age Group National Championships are kinda the red-headed step-child in the tri world – at least at the amateur level.  At the pro level it’s a whole different story (reason = money offered for pro’s).

This race moves around from year to year, this year it’s in Tuscaloosa, Alabama on August 22nd.

Now, qualifying for this event is significantly easier than qualifying for Kona or Clearwater.  But it’s important to remember it’s also targetting a different segment of the tri world, as this is primarily aimed at the Oly distance instead of Half/Full Iron distances.

That said, depending on the phases of the moon and tidal waves, there are approximately 32 million ways to qualify for Nationals, here’s the low-down: 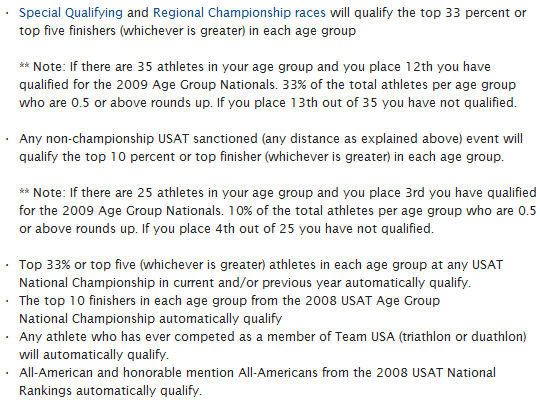 Once you’ve qualified for Nationals, you go and race.  It’s a big day!  Note, there are also sprint, long course, winter, team and collegiate nationals held at various times throughout the year.

If you race at Nationals and fall in the Top 16 in your age group, you can move onto Worlds (roll down to Top 20), which is held in conjunction with the ITU World Championship race (where the Pro’s race).  This also moves around from year to year.  This year it’s held in the Gold Coast, Australia, next year (2010), it’s scheduled for Budapest, Hungary.

Note though, that there are significant differences in the performance level between the Age Group World Championships and the ITU Pro’s level.  Meaning, the top AG person wouldn’t likely be the last place person at the ITU pro level.  That’s because (without getting into a lot of details), to get to that ITU race you have to earn points on the ITU circuit (lower level races), which means there’s an entire class of folks racing ‘in between’ those two levels (not to mention ITU Junior Elite or ITU Collegiate folks).  Further, many many folks (especially younger but very competitive racers) don’t have the means to go to both AG Nationals and then AG Worlds.  Just trying to paint a realistic picture here… 😉

So, in summary – there’s a number of big events that us non-Pro’s can strive for in numerous difference distances in both the running and triathlon world.  Hopefully I’ve covered all the biggies, but if I’ve missed any questions, feel free to post (or answer) them in the comments.