Tonight was a good night in training land.  I had decided last spring when I first got my road bike that I would just get ‘decent’ at handling a road bike before I put on aerobars.  I reasoned that if I tried to get used to riding a road bike at the same time as trying out aerobars, I’d likely face plant into the concrete or a car.  Both options being less than desirable.  So my plan was to wait until after my ‘A’ race in September (70.3) until I got them.

After doing some reading up on different bars it all seemed to come down to personal preference.  Given that I had no idea what I would prefer, I just went to the local Performance shop and picked up two different kinds and figured I’d return one of them.   The first pair that I’m trying is pictured below. 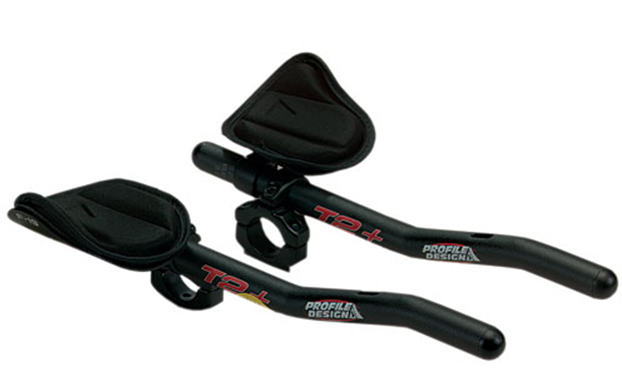 Last night I fit the first set to my bike.  The total install took about 15 minutes, 10 of which was moving other things that were in the way (light, reflector, GPS mount).  I then plopped on the trainer and rode with it a bit while adjusting it until it felt ‘right’.  Of course, it’s likely that I positioned them in the least efficient manner possible, but they generally are positioned in a manner consistent with what I saw everyone else doing (I adhere to the lemming theory that everyone else is probably right).

At any rate, I went out earlier this evening on a barely rolling, straight, low-traffic bike path and just rode for about an hour.  It was fun, something different.  They seemed good, but I’ll have to compare them to the other set on Thursday to determine which ones I like more.  A couple of things I noticed:

Ok, ride complete, I rushed (at about 78mph) back around the Beltway back towards Old Town/Home to catch the 7PM start time for a local running group.  I made it with about 20 seconds to spare.  Just to in time to be volunteered to lead a pace group.  It was also my first time with this group.  I had done a weekend 19 miler with them a few weeks back, but hadn’t tried any of their Tuesday/Thursday runs.

The course went through some really nice streets/hills I never knew existed (despite living like two miles from them).  And the group of folks was pretty cool all around.  It really helps to have other folks out there when doing faster paced runs – it makes the time fly by.  Plus, we went sub-6 for the last mile 🙂

Looking forward to doing their Thursday run as well.  The Tues/Thurs 5-6 mile runs fit perfectly with my schedule, so it works really well.  All in all, a pretty good night.