This morning I went to the Kirkland Sprint Triathlon to watch a few friends race.  It was a good time, and seemed to be a well run event.  In many ways I wish I competed in it, but it was good to watch friends and cheer them on as they cheered me on in other races.  Plus, I still have one last tri left before the end of the season – so it’s not over yet.

It was nice getting there at about 6:50, instead of 5:50.  I just wandered down the hill to the swim start, where they were getting prepared to start the first wave.  There was a slight delay due to something/someone on the course somewhere, but they started shortly after clearing it – around 7:10AM.  The swim was a .5 mile flattened horseshoe shaped course, around five buoys.  The event had over 1100 people participating in it, so they did waves about every 3-4 minutes until nearly 8:00AM.

For both of the friends I came to watch, it was their first tri.  One was somewhat nervous about the swim (he not being a big swim fan), and the other wasn’t (she once being a competitive swimmer).  After a few waves it was his turn to go first.  He started off fairly strong, as evidenced by the photo below.  Of course, after about 60 seconds it’s fairly hard to track someone but all seemed to be going well as I watched the blob of thrashing go off into the distance.  The only saving grace in me being able to spot him is that he wasn’t wearing a wetsuit.  He mentioned that about halfway out to the first buoy he thought to himself “What on earth did I get myself into, how am I ever going to make it to the swim finish?”.  But he cruised along and came through without drowning a short while later.  He did mention he did make one of the kayakers get a workout in chasing him down as he started to head across the lake.  Here he is shortly after the start, in the middle of the washing machine.  I might have forgotten to mention that an outside edge start probably would have been a little less ‘painful’.  My bad. 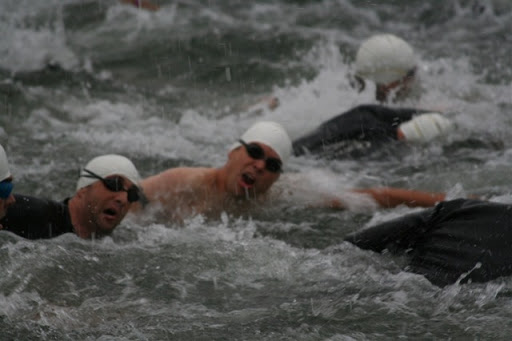 Spectating two people with different paces and in different waves is a bit of a challenge I found out.  The other friend started about 15 minutes after the first.  Further complicating efforts was that the swim exit was about 200 yards away across dense crowds.

She’s a fairly quick swimmer, so she was on the front line of the swim group as they waded into the water and waited for their wave to start.  Because she was cruising near instantly, it was a bit more difficult to get her photo.  But I prevailed!  Well I got an arm anyway.  You can see her below – middle of the photo, doing a solid job of drafting behind one of the leaders. 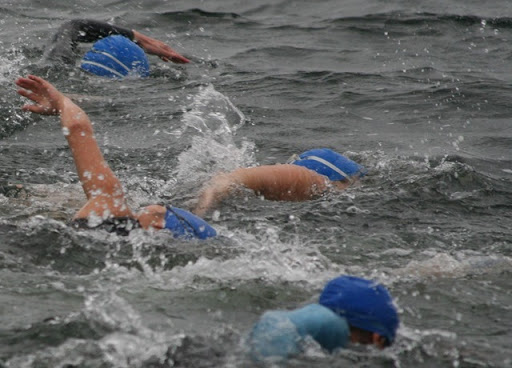 She hauled through the water, and they both got through T1 fairly well and were quickly off onto the bike.  The bike course started out near the lake, and then went east over a moderate hill through somewhat hilly roads.  But it looks like it would have been a fun course.  That of course assumes you enjoy biking in some way/shape/form.  Based on the look on her face as she left T1, I’m not entirely sure that’s the case.  She does smile a few seconds later, but I couldn’t pass up on this picture.  I’m pretty sure my face looked like that on my first tri during the swim. 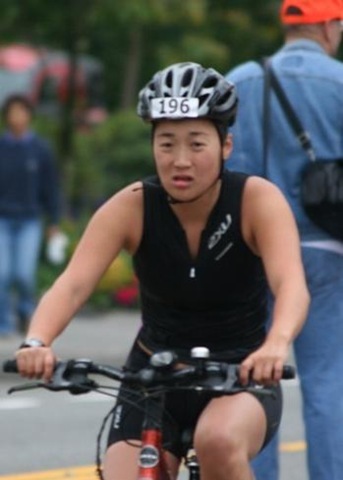 My other friend though – an avid mountain biker and new to road biking – seemed a bit more happy on the bike: 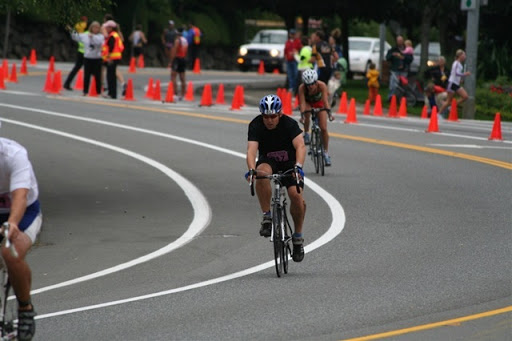 Due to the different wave starts and swim finishes, the whole catching them coming and going was starting to get difficult.  Plus you’ve got to work in key things like getting Starbucks – a critical part of any outdoors sporting event.  One of the cool parts about the course though that you can see in the photo above is that the bikers come into T2 (about 300 yard in front of these bikers), and then run back up the hill next to the bike course.  Finally, they run back down through the intersection above into the finish chute (the cones denote the two running directions and one bike lane).  So from a spectators standpoint, it’s about the greatest place to be to catch multiple people coming in/out on the bike/run.

The first friend came in shortly after the other one went out, but I arrived just in time to catch him on both the bike, as well as starting the run.  You can see here in the middle – he’s in good spirits despite just starting the run and heading up a long hill. 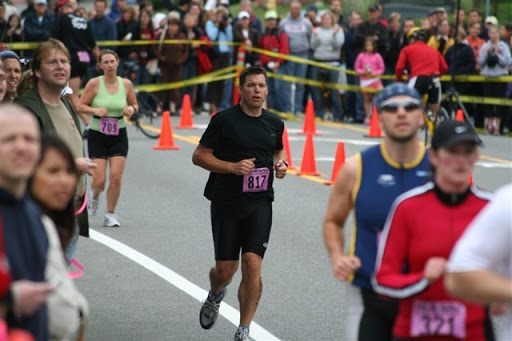 Shortly thereafter she arrived in on the bike, and departed on the run, and he arrived in from the run.  It was a busy time at the intersection.  Here’s a photo of her as she flew down towards the finish line (having a hill on last 200 yards of the finish makes it fun).  Clearly she’s much happier now than on the bike. 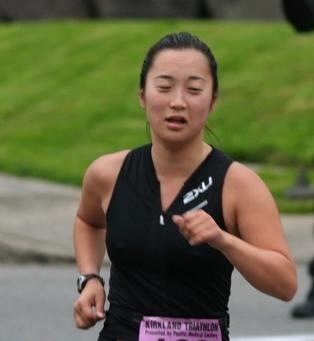 They both did a great job in their first Tri’s!  And it was quite a bit of fun to watch them – and everyone else.  Pretty impressive some of the stuff you see (but don’t sometimes see as a racer).  I saw someone crash (hard) about 200 feet from the finish, but after a brief moment of confusion she got up and onto T2 and the run.  Also saw a guy running his bike to the finish line (no idea how far he went, I saw him run it at least 1/4 of a mile).  He was making impressive time.  Me thinks next time he’ll remember a spare tube. 😉

Congrats to everyone who raced today at the Kirkland Tri!