This weekend was both busy and relaxing at the same time.  Just depended on which day you were looking at.

As we left off on Friday, I had finished up the Bike to Work with the bagel, and then biked home and slammed out a trainer ride.  I had a quick 15 minutes to get ready and fly out of the door to meet up with friends a few minutes away.

As one might expect with Washington DC there are many formal events.  In fact, if one really wanted to they could find all assortment of galas and balls to go to virtually every night of the year.  But I only go to 1-2 events per year.  The one I enjoy the most though is one put on by an organization that promotes stuff for my home state – Washington State (not DC).  Every year they put on a massive (about 1,000 people) ball that has great food, dancing and tons of prizes.  Although – it’s called a Potlatch instead of a ball.  The food is all flown in from Washington State the day before – everything from the oysters to fresh salmon to the beef tenderloin, dungeness crabs and vegetables.  In addition, there are tons of raffle prizes (like 50-100) from Washington companies with stuff like Nordstrom’s Gift Certificates, Amazon.com certs and cruises.  Awesome stuff.  It’s an awesome time.

Oh…and here’s me in my new suit. As you may remember from last fall, I had to go out and find a new suit since my old one no longer fit me.  I’m pretty sure this is the first time I’ve worn it since buying it.  Although…I’ve gotta a busy suit month planned over the next 30 days (which btw, might make for some interesting posts).  And sorry for the awkward photo, I had to crop it a bit from the original with other peep(s) in it. 😉

(*As noted in the title, my suit is actually black – but I was wearing a blue shirt, and if I had said “Black Suit”, then my title wouldn’t have worked…and I’m too lazy to come up with something else creative)

After a relatively long night…I gots to sleep it!  Woohoo!  This is the first time in god knows how many months.  With the New Coach, my Saturday’s are now relatively tame (my long runs are now on Tuesday), so all I had to do was knock out a 75 minute swim and an easy 40 minute run.  No problemo.

I used my spare time to go to the Andrews Air Force Base air show – the premier air show in the area (open to the public).  It features the Blue Angels, among many others.  Unfortunately when I got there (after my swim), the place had apparently filled to ‘capacity’ (WTF?) – so I had to observe from just outside the base instead.  But I got a few good photos.  I’ve also added a photo I took from a previous year because I liked it. 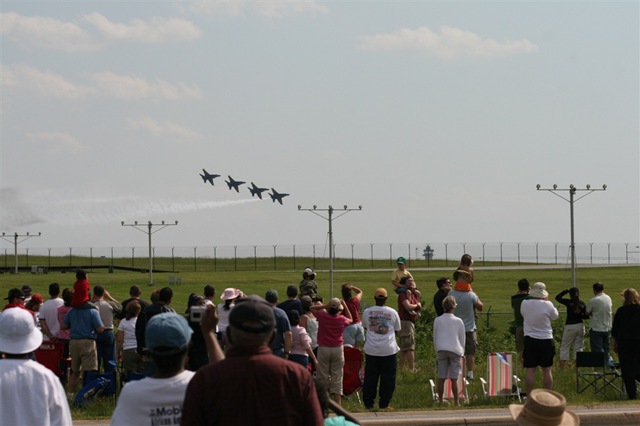 (My place at the end of the runway) 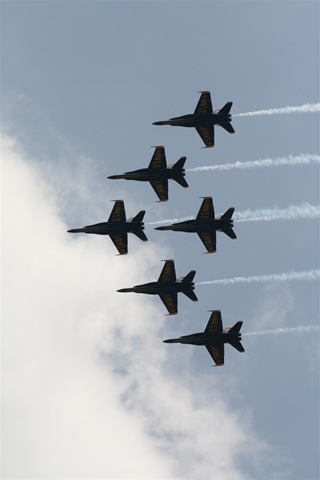 (As they passed overhead in formation) 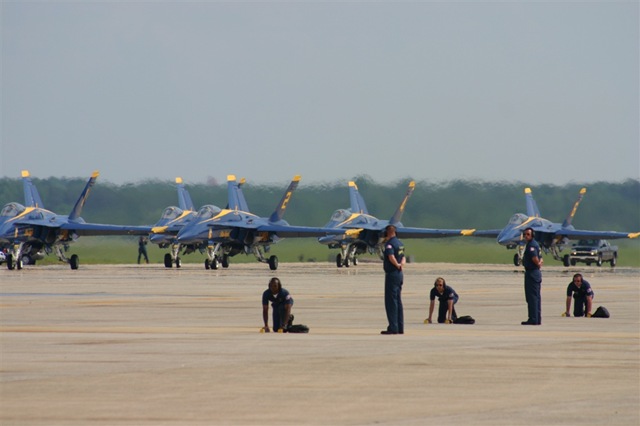 (A cool one I took in a prior year, of the ground crews and the Blues)

It was off on Sunday to get in some long ride hill action.  I headed out early to Skyline Drive – along the top of the Shenandoah Mountains.  For those not familiar with the area, this is where the Appalachian Trail runs through (ya know, that thing you learned about in grade school).  It runs along the ridge line of this mountain, right near Skyline Drive. 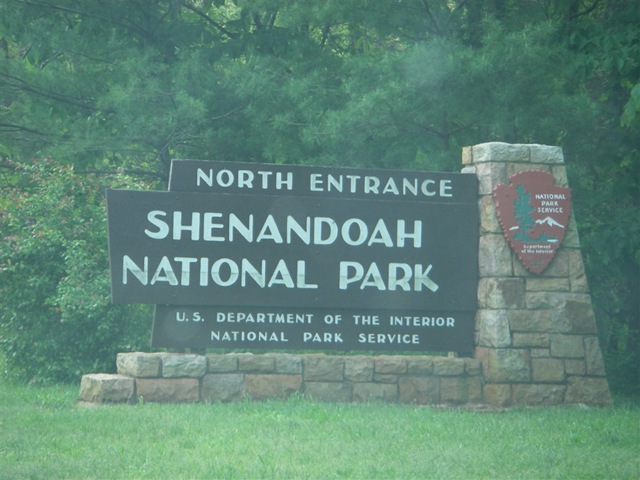 After getting my bike all set and ready to go, I placed my camera on another car for a quick photo and then headed out.  Btw, sporting a new jersey that I got in Whistler for 50% off.  Fitting that it has mountains on it, for today’s ride.  Riding with the Cactus jersey just didn’t seem right. 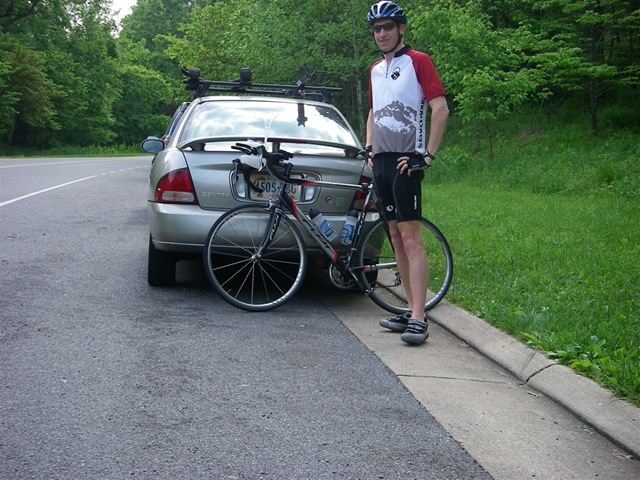 And then… I headed up.  Up, up, up.  The good news is the drive was relatively quite.  It’s not peak tourist season yet, so there wasn’t many folks out there.  Btw, I only took photos on ascents – cause I can take photos and bike up at the same time.  But going down and taking photos scares the crap out of me. 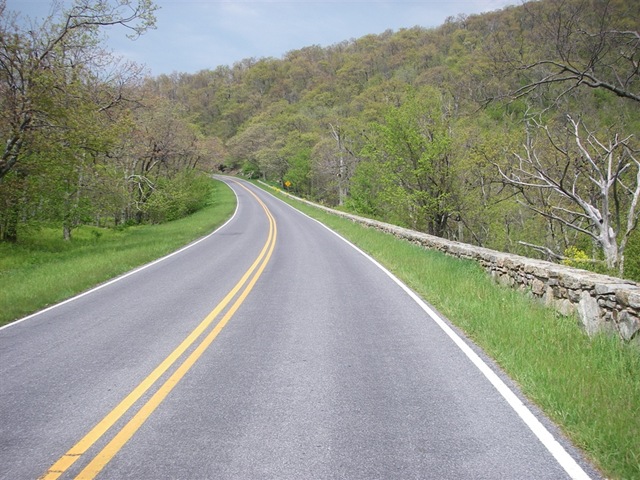 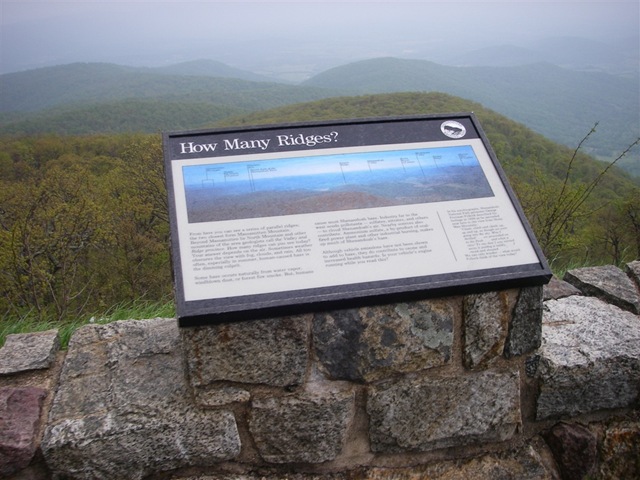 I saw the above sign out of the corner of my eye on the way up, and grabbed a quick fly-by photo on the way down.  My answer as I was heading up the mountain “Way too f’in many!”.  My answer 2 hours later was still the same. 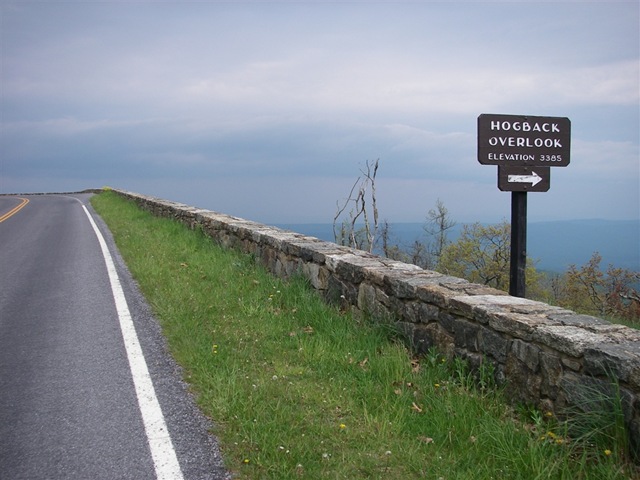 See the above sign?  Good – so did I.  I even took a photo of it.  But what didn’t I do?  Fully comprehend that was were I was supposed to turn around and head back down – enjoying 20 miles of downhill.  Nope, I hit this pass and then DESCENDED 1,000 ft and 3 miles further and THEN realized I was supposed to turn around 3 miles and 1,000 ft ago.  There was a massive moment of fcuk that occurred.  We’re not just talking 3 wimpy miles – were talking a big ass elevation gain.  EVERYTHING between those two lines I wouldn’t have had to have done if I had mentally processed everything.

So, after scaring all the little squirrels away with expletives, I HTFU’d and headed back up what I just came down.  After that, it was mostly descending.  It was at the point that as I re-crested this ridge that it decided to start raining.  Seriously.  Another string of expletives was distributed to the National Park Grounds.  Here I wanted to fly down the mountains and instead had to go ‘slow’ due to rain and driving cross winds.  Slow was still around 35MP, but I was hoping to get more practice with bike handling skills at higher speeds.

Anyway, I finally finished up and then headed out on a quick 5K run.  Up and down more hills.  20 minutes later I was done.  I sped back to DC in under and hour and had 5 minutes in the shower before friends arrived for a BBQ.

A huge cheese spread, some wine (there were only three of us), and steaks.  Good times. 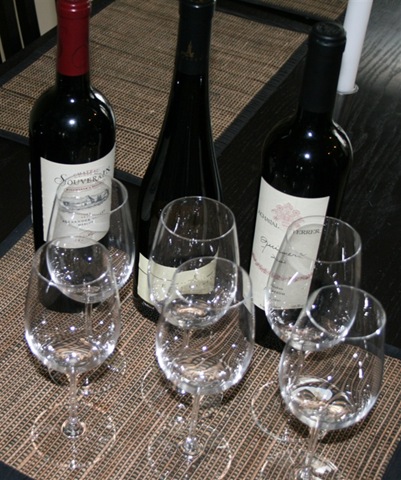 (Italian Pinot, Californian Merlot and one of my all time favorites – a Argentinean Malbec blend from Achaval Ferrer) 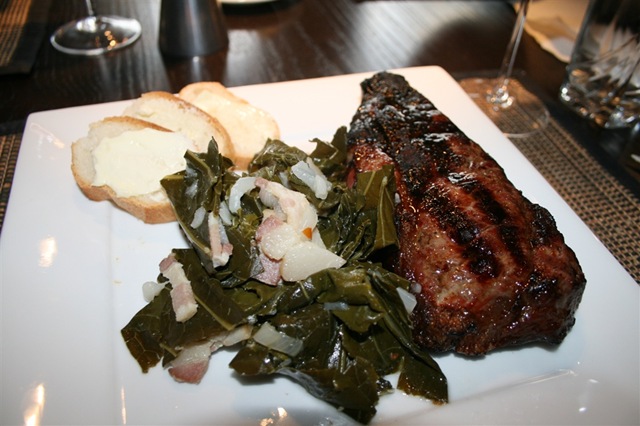 So with that…that’s it.  My weekend in a post.  Oh and sorry again for being long.  I post as much as for myself as for others, it’s fun to look back months or year later and see what I did.  I usually take hundreds more photos than this every week and try to limit it to just posting a few to keep it short(er).

Have a great week!

Oh, one last thing.  While I had planned to write up a review on the new Garmin Forerunner 405 for Tuesday – I’m postponing it for a few weeks.  At the moment I’m incredibly frustrated with the watch (based on the 5 or so uses thus far), and I want to give it a bit more time to see if it’s me – or the device.  I came amazingly close last night to throwing it out onto the street into oncoming traffic.  No, I’m not kidding.