We arrived into Guam last night late enough that it was dark out.  I was looking forward to getting out and exploring things in the daylight, and in particular looking forward to going for an open water swim.  Daylight struck fairly early (I’m guessing around 6AM), which was fine, because I was up fairly early being all whacked out on time ones.  After a free breakfasted (included – woohoo!), it was down to the beach in front of the hotel for a swim.

It turns out the hotel sits at the end of a crescent shaped protected bay, with a natural breakwater a ways out in the bay.  No boat traffic can come into the bay due to the coral and breakwater.  This seemed like it would be ideal open water swim territory with no boaters to worry about.  Here’s a view of the bay from my hotel, and where I started my swim.  I had no idea how far across it would be.  But I just figured I had all the time in the world – so off I went.

After going about a 100 yards, the coral quickly crept up on me.  I didn’t exactly expect this.  I figured the water would be 10-15 feet deep.  Instead it turned out to be about 2-4 feet deep.  Sharp pointy things are not exactly ideal for freestyle swimming.  So I had to make some small navigational detours around chunks of coral to stay in water deep enough that my hand wouldn’t touch the coral during my stroke.  I can say that it definitely helped with my form in keeping my lower body higher up in the water – didn’t want my knees hitting the coral either!

I plodded along, making little detours here and there and battling the slightly windy conditions, making for a touch bit a chop.  After about 50 minutes I finally reached my destination – the other side of the bay.  I had to take a major detour about half way across when I ran into a long strip of exposed coral/rocks, which you can see on the satellite image below.  Overall, my swim was 1.95 miles (3400 yards) in 51 minutes, which included one brief stop where I stood up to figure out how in the world I was going to cross some coral sections.  Below is the Sport Tracks view of the action (I had my GPS in my swim cap). 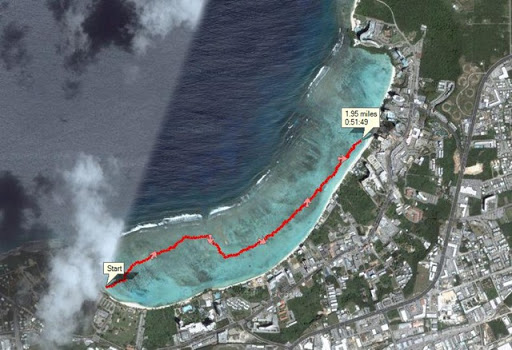 After my swim (and subsequent 2 mile walk back to the hotel), it was time for some pool lounging before my brother came back from his adventure – a walk well beyond my swim route into some secluded cliffs/beaches.

We then headed out for a drive around the island.  Driving around Guam is fairly straightforward, just follow one of the islands coastal roads and a few hours later you’ll be back where you started.  Here’s a couple of shots from our three-hour tour, starting with the beach in front of our hotel. 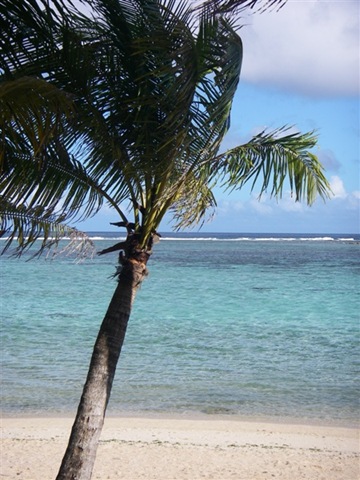 There’s a point called ‘Lovers Point’ that overlooks the entire bay that I swam across, it’s up a few hundred feet in the air overhanging some cliffs.  For some weird reason people buy luggage tags and affix them to the lookout’s fence.  I don’t understand – I don’t try to understand – I just take photos. 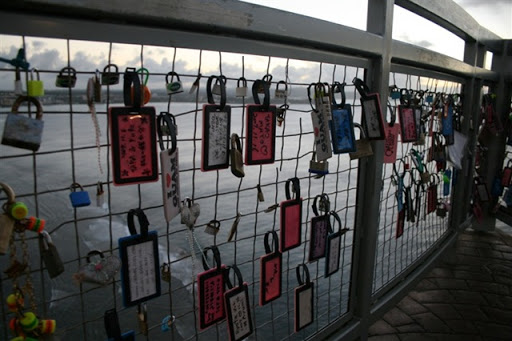 After that, we continued our journey to the eastern side of the island past a small park where sharp rocks jutted out into the ocean. 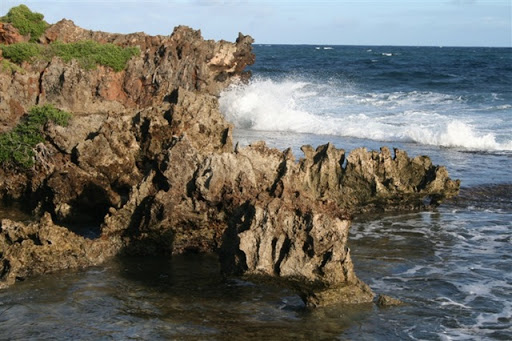 As I was driving along, I tried to take a photo of my brother navigating.  He decided to make a face that implied he was lost.  Ironically as we performed this exchange, we missed our turn.  Doh. 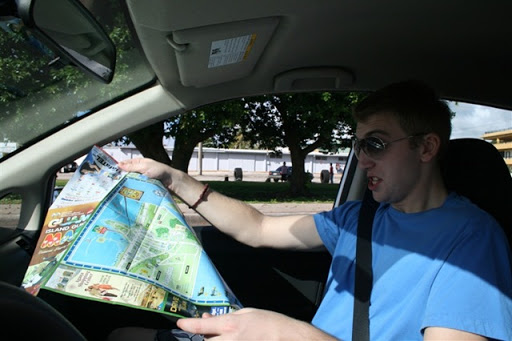 From there, it was down towards the southern side of the island, stopping at one point overlooking a bay.  We managed to use the little bit of Japanese that both my brother and I can speak (from four years of high school Japanese class) to convince some Japanese tourists to take our photo.  They were fairly surprised that two 6 foot non-Japanese dudes decided to speak Japanese.  Success! 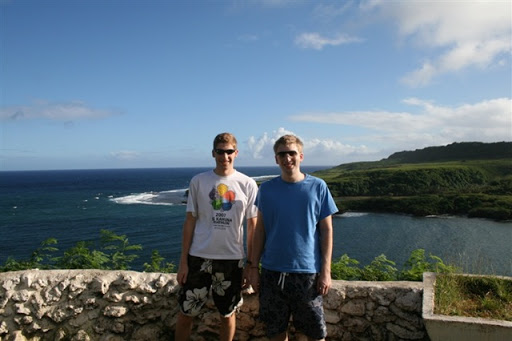 We rounded the southern tip of the island and the scenery dramatically changed from tropical to a bit drier – check out the mountains. 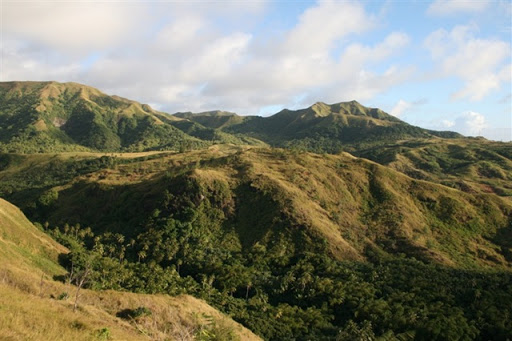 Anyway…probably more photos than you wanted.  We just landed in Palau and arrived at the hotel.  Tomorrow should be a rockin’ day as we’ve got two dives in the Rock Islands, which will include some speed boat action through the maze of islands, and then a stopover at Jellyfish Lake for some unbelievable swimming action before heading back to the hotel.  See ya!