Getting the short pool

Sometimes you’ve just gotta make due with what you’ve got.  Some people are blessed with size…and others with the ability to use what they have (I’m talking pools here folks, don’t be gettin’ all distracted on me).  Tonight was a perfect model of that.

I’m up in picturesque Cambridge (Boston) for a quick two day business trip and wanted to get my swim in.  I had received advice from the esteemed Audrey on an awesome nearby pool – the MIT Aquatics Facility.  This place looked incredible.  I had a fairly slim allotment of time to work with after work, so I quickly set off for the 5 or so block journey from my hotel to the pool. It was around say…block 20 that I realized I might have taken a wrong turn somewhere.  I then decided to take another turn, which didn’t help the situation. Some 40 minutes later I arrived at the pool.  Far to late to get in a decent workout worth paying $11 for.  So I decided instead to walk back to the hotel via the correct route and in doing so figure out how to get back for tomorrow morning.  Once I got back to the hotel I had about 30 minutes to kill, so I went to the hotel’s pool.  Now normally folks would think you can’t get a good workout in on a pool this short.  And in general you’d be right.  However I had a plan.  A master plan!

We should probably back up a brief second and explain one problem with my swim.  Aside from generally sucking at swimming, I also can’t do flip turns.  75% of the time I end up going in a direction other than my desired flight path.  And the remaining 25% of the time when I do manage to flip accurately, I usually end up nose diving into the ground a few feet away.  Not.so.stylish.

So I set myself on doing as many flip turns as I could fit into the time I had (which was down to about 20 minutes after you take out shower time).  Behold the athletic masterpiece that I had to work with: 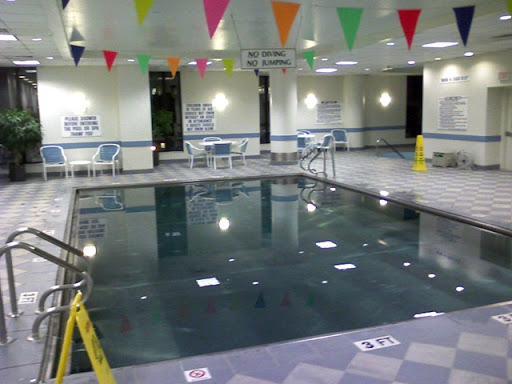 To provide some clarity, the length of the pool is a whole 20′.  Yes – 20 feet.  Not yards.  This would roughly be a 7 yard pool.  It’s a metal basin that makes funny sounds when you step/push on it.  It includes two sets of flags though!  It has no lanes, no lane markers and certainly no place to aim for on flip turns.  But I can make lemonade out of kiwi’s.  I found a weld line on the bottom of the pool and used that as my lane marker, and I quickly figured out it took me 6 strokes to reach the other side of the pool.  That equated to usually two breaths between each flip.

One thing is clear – it’s a bit more tiring than just swimming in your usual 25 yard pool.  First off, you’re doing a flip every 8 seconds.  Secondly, you’re breathing has to be perfect or you smash into the walls trying to get that last breath in before the flip.  Finally – the short end of the pool is only three feet deep.  Which ended up working in my favor as I improved my ability to execute the flip in a more compressed manner.  After a few dozen in a row I started to get pretty consistent with them – I think I definitely improved my flip turn style to ‘almost passable’.

After 20 or so minutes of ‘swimming’ I think I completed somewhere in the neighborhood of 100-150 or so flip turns (basically nonstop).  I might even head back down and do a few hundred more flips….

Oh…I met up with a certain someone tonight – but you’ll have to wait to hear more about that. 😉