This product has been discontinued by the manufacturer. It's been replaced by the Garmin Rally Series, you may want to check out that review instead.

Today, at the start of the outdoor portion of Eurobike, Garmin has made two cycling specific announcements.  The first is unveiling the Vector S power meter, while the second is announcing upcoming ‘Cycling Dynamics’ metrics that will be applicable to full-fledged Vector owners. 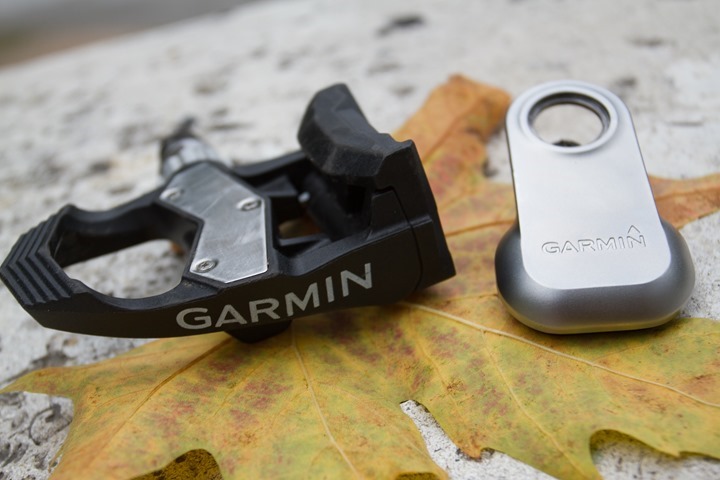 Here’s the simplest way to think of Vector S: Half the power meter for half the price.  Err…almost almost half the price.  Garmin has followed in the footsteps of Stages and now Rotor in releasing a left-only power meter.  This means that you’ll get a single left-pedal and associated pod.  As a result, the price is reduced from $1499 to $899US (side note: As of today, Vector’s permanent price is $1,499, from $1,699).  In the future, should you decide you want to ‘upgrade’ to the full system, you can purchase the right-side for $699, making it a complete set at the same price as the full-fledged Vector.

So what’s a left-only power meter?  Well it means it only measures power coming out of the left leg.  Stages pioneered this about two years ago, with a sensor pod attached to the left crank arm.  In the case of Vector, it’s in the left pedal just like the regular Vector system measures in the pedal, and measures using strain gauges in that left pedal.  The reason why this is important though is that it won’t capture your right-leg power.  So if you have an imbalance (normal), you won’t necessarily get an accurate picture of your power output. 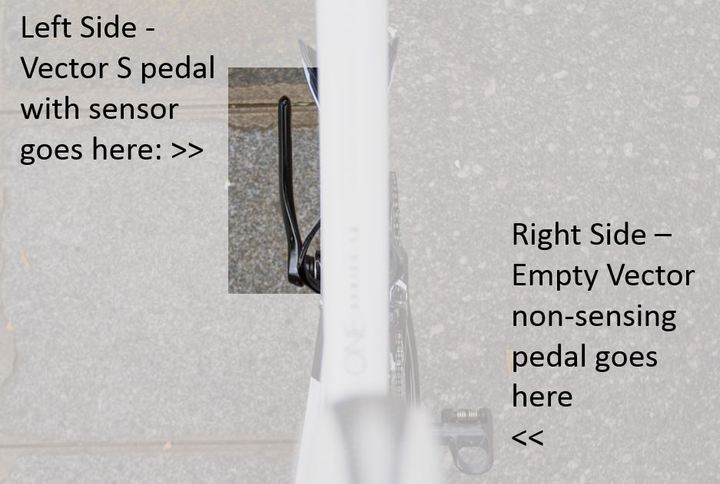 Now, many would argue that as long as the power is consistent, it doesn’t much matter.  And, there’s some truth to that but also some elements that are incorrect.  In the case of Team Sky – that’s the approach they’ve taken with their recent Stages sponsorship.  It really depends on how you use it.  The imbalance variations you see do however differ from person to person.

For example, I have a slight imbalance to one side up until my FTP (functional threshold power), but then beyond that the imbalance becomes quite exaggerated.  So if my left-side was 55% (and right side 45%), that would mean that my total power would be incorrectly exaggerated by 10% (110%), as left-power is always simply doubled.  I’ve also found that my power balance changes the more I fatigue.  Thus, on a 90 minute ride I stay consistent, but on a 4+ hour ride, I start to slowly become less balanced.

Finally, this can become more challenging with long-term data if you start off with a left-sided power meter and then move to a full power meter, since the long-term data would be inconsistent and might not show your gains properly.

I asked Garmin what they thought the merits/downsides of a left-only system, and here’s what they had to say:

“In our research and data collection among testers it has proven to be reliable. There are left-right differences for every athlete and these are not static, but the changes appear to be reasonably repeatable and a single-sensing solution is a great entry point for cyclists interested in adding power to their training tools. If they decide they want direct left-right accuracy later on, they can always purchase the upgrade pedal for a dual-sensing system for additional insight into how they ride bikes. “

Now for me as a triathlete, I rarely (if ever) go beyond my FTP – so I’ve found in analyzing my data long-term that it’s less of an issue.  Whereas for a sprinter or track athlete, it might be more of an issue.  It’s really hard to say since there’s not a ton of good study information on it yet, just lots of data floating around.

Again, don’t misunderstand my explanation of the pros/cons above.  I think that anything that reduces the power meter price point is great.  And, I think everyone’s requirements are different.  To that end, I think that for many people, a left-only system is sufficient as long as they understand the limitations (no, it’s not as simple as “Team Sky is using one, so it must work for me!”).  As with all power meters though, you still have to do the hard work – merely having a shiny piece of metal installed on your bike doesn’t make you faster. 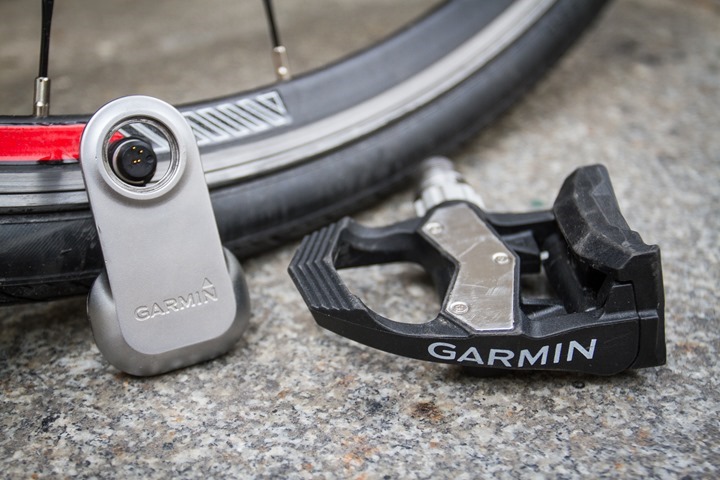 When it comes to what’s in the package, you’ll get the following:

All of which you’ll attach to the left hand-side of the bike, just like this (except for the ANT+ stick): 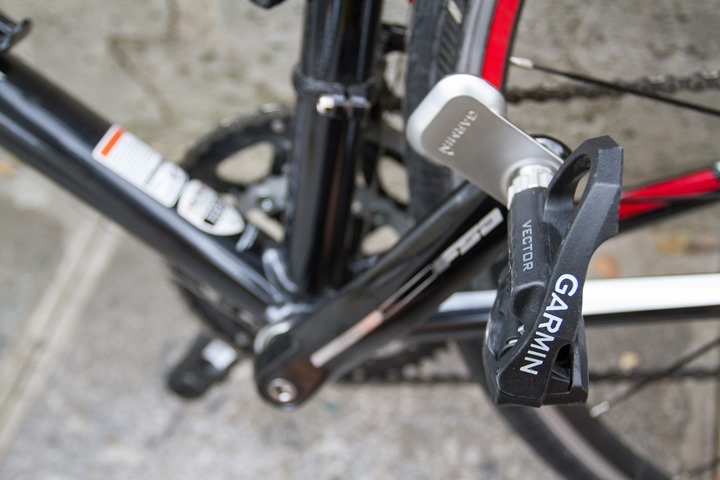 Now, to be really clear – Vector S is again just half a Vector.  There isn’t any difference in hardware between them.  Though, there has been changes in hardware to Vector over the past year.  Since public availability last August, they’ve made a number of hardware and software tweaks.  These include:

– Pod Material: The material of the pedal pod was changed from cast aluminum to forged aluminum (to reduce breakage during installation).
– O-Ring: Units started shipping with a rubber o-ring on the inner thread of the pedal spindle to help self-center the washer(s) during installation.
– Larger Pods: New larger pedal pod option was made available.  Technically it’s not the pod itself, but rather the pod cable that’s larger/longer.  This is for larger crank arms.  This will be available for Vector S as well.
– Metrics: Released a software update adding in torque effectiveness and pedal smoothness
– Error Logging: Released a software update that logs errors of the crank length or installation angles have been incorrectly set

Now for those of you looking at power meter options, do keep in mind that Interbike is still two weeks away.  As such, I wouldn’t make any decisions until any further announcements happen then.  Plus, it’s not like Vector S is available this week anyway.  In the meantime, check up on my most recent Power Meter Recommendations post from last September to get a bit of background.  I’ll be updating that post again in the week or two after Interbike based on all the announcements.

Finally, for those that do want to pre-order, you can do that through Clever Training for Vector S and support the site.  The DCR Clever Training VIP club discount is eligable.  However, it’s also worth noting that effective today, Garmin has dropped the price of the full Vector variant from $1,699US to $1,499US.  Yet, the $200 rebate remains valid through September.  So that gets you down to $1,299US, and that’s before the 10% DCR VIP club discount.

In addition to Vector S, Garmin is also introducing the concept of ‘Cycling Dynamics’, which are a series of new metrics in the same line of thinking as their ‘Running Dynamics’ that were introduced last fall for higher-end running products.

The information on these is a bit slim at this point. While Garmin has given descriptions of the different metrics, along with screenshots of how it looks on compatible displays – we don’t yet have the actual data fields, nor how it’ll appear on Garmin Connect.  So, you’ll have to let your imagination run a bit here beyond these two screenshots.

Note that all this new new ‘Cycling Dynamics’ functionality requires a ‘dual-sensing’ Vector (aka, the full two-pedal Vector, not the Vector S).  While some of these might be quite achievable with Vector S, others are definitely two-pedal focused.  I suppose in some ways it’s kinda like how the FR220 is technically capable of capturing Running Dynamics from an HRM-RUN, but that’s reserved for the higher-end FR620.  So again, you need the original/full Vector version.  If you have Vector already, you’ll get a firmware update sometime later this year with these new metrics being transmitted. Here’s the rundown: 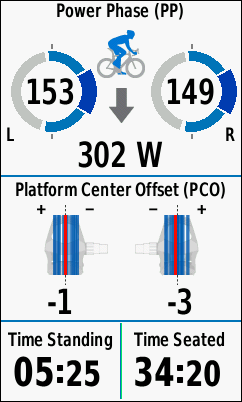 First up, Garmin will now record whether you’re seated or standing.  This is recorded into the activity files, allowing one to create a composition of a ride against whether they were in our out of the saddle.  This can then be correlated against power data (or, a spot on the map).  Garmin says that the change is detected instantly and recorded as such in the activity files on supported head units.

You can see your time in and out of the saddle as a new metric on supported head units, just like you might add average heart rate or average power to your screen.  You’ll notice that this metric carries through not only as a single data screen (Time Standing/Time Seated), but also as an arrow and icon on the Power Phase display as well.

Next is Power Phase, which is about determining where in the pedal stroke the leg is generating the most wattage, down to a precise slice of the stroke (think of the stroke as a clock).  This then can be mashed up against metrics like left/right balance to put together a potentially interesting picture of a ride, or, a larger group of riders.

Now, given we’ve got lots of ‘interesting but non-actionable’ data from left/right power meters today, I asked Garmin how this new data could be used in real-life.  They noted that:

“The PP data can support the exploration of theories about the optimal crank angle in the pedal stroke for producing power, the smoothness of power created, and what that might indicate about fit or fitness. We also plan to provide summaries of PP stats by type of rider, as we collect data across a larger population of cyclists.”

This jives a bit with what they’ve been saying for well over a year in that in order to understand this data, it really needs to be aggregated en masse to look at trends and try to identify clear patterns.  I don’t think a single rider by his or herself will really get a lot out of this until smart sports science folks can clarify how to best train or race by it. 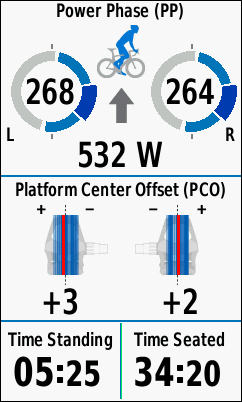 Finally, we have Platform Center Office (PCO).  This is likely going to be most useful in bicycle fit, to determine when a rider is offset from the center of their pedals.  Additionally, this can be used in injury rehabilitation.

What’s occurring here is that Vector is reporting the axial location of the force applied across the pedal body.  This includes along the spindle, from inside to outside of the pedal.  This is then visually indicated within the PCO offset.  You’ll notice if you compare the imagery to the right while the cyclist is standing it’s slightly different than the offset while the cyclist is seated.

These are all planned for “Late 2014”, and will require a firmware update to the Garmin Vector pedals.  So, if you can’t remember where you put that little tiny USB stick that came with Vector, now’s a good time to start looking (or, to steal a friend’s).

Of course, using these metrics will require a compatible head unit.  Just like Running Dynamics, only certain watches/units will support it.  Garmin won’t announce those units until closer to software release.  I’ve gotta believe that at a minimum it would be the Garmin Edge 1000, Edge 810, and Edge 510 – but that’s just my speculation.  I could potentially see them rolling in an update to all those with the Garmin Segments support (which, they haven’t promised either).

Next is the question on whether it’ll be ANT+ or private-ANT.  This is meaningful because it would drive whether or not other companies would easily offer similar metrics and compatibility with their own products.  If the Running Dynamics side is to be any indicator – the answer is a resounding ‘no’ to openness, as that functionality is still considered ‘private’.  I would expect that since the data is recorded into a standard .FIT file, once the data is there, then any 3rd party app could get it after the fact (i.e. Training Peaks, Strava, Sport Tracks, etc…).

Of course, I think ultimately it’ll be interesting to see these metrics trended over large groups of people, and the data funneled into research and bike-fit focused efforts.  I suspect that’s where the most bang for the buck will come.