Today at Eurobike K-Edge had on hand a number of their just announced mounts, the most interesting being a new combo mount adapter that holds both your GoPro (or other action cam), as well as your Garmin bike computer.  Beyond that, they’ve also added a new more aerodynamic bike-computer only mount for Garmin devices, and a mount for Pioneer power meter head units.  Let’s dive into things. 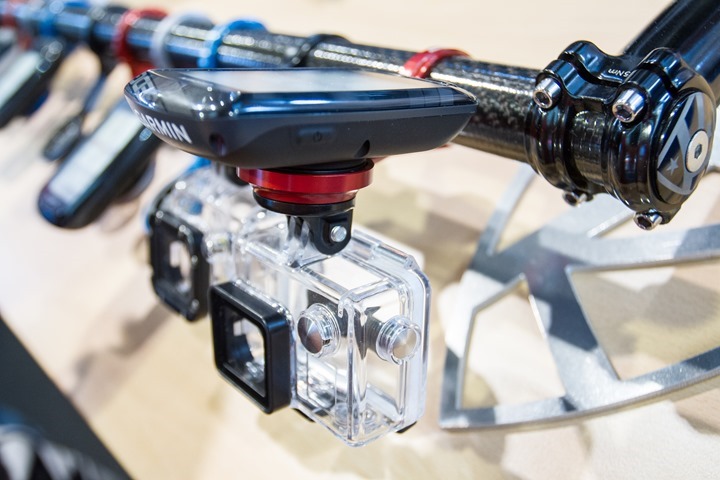 First up is definitely one that’s designed to become my new favorite front mount – the combo action cam and Garmin bike computer holder. This adapter fits onto the bottom of of any of their existing K-Edge Garmin bike computer mounts.  Those mounts hold a standard Garmin quarter-turn mount up top, allowing you to install any of the Garmin Edge series (Edge 200/500/510/800/810/1000, Forerunner 310XT/910XT with quick release kit).  It also works with a handful of other companies that have come out with various Garmin-compatible mounts, such as the Wahoo RFLKT/RLKFT+. 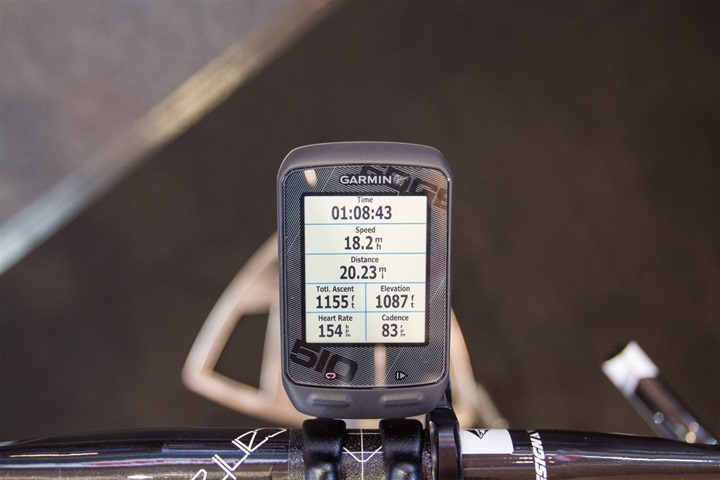 Yet, when you dip down below you’ll be able to attach the mount to the underside of the existing mount. 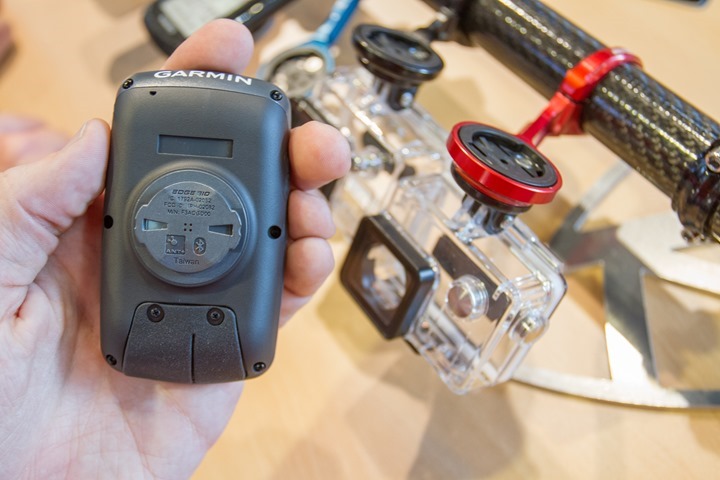 That’s where you’re then able to secure the GoPro compatible mount adapter: 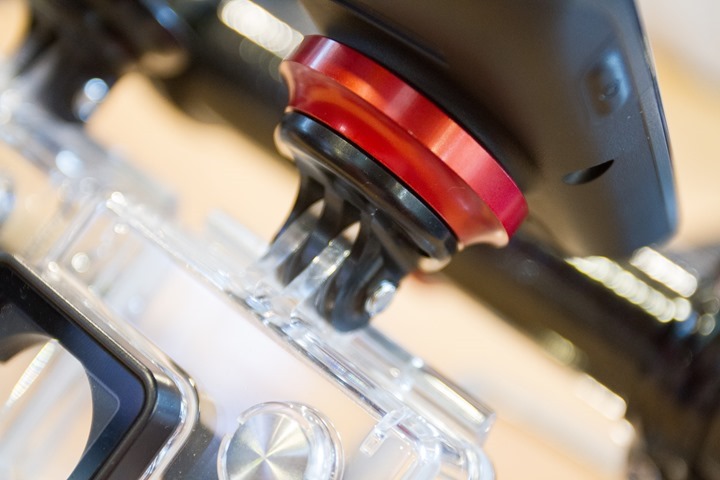 This mount can in turn accept any GoPro camera using their standard mounting system.

Of course, most other action camera companies do provide GoPro compatible mounts with their cameras.  For example, the Garmin VIRB includes an adapter mount in the box, so it too would work directly with the system.  Alternatively, the new Shimano CM-1000 straight-up uses the GoPro mount as its primary mount, so that’d work too: 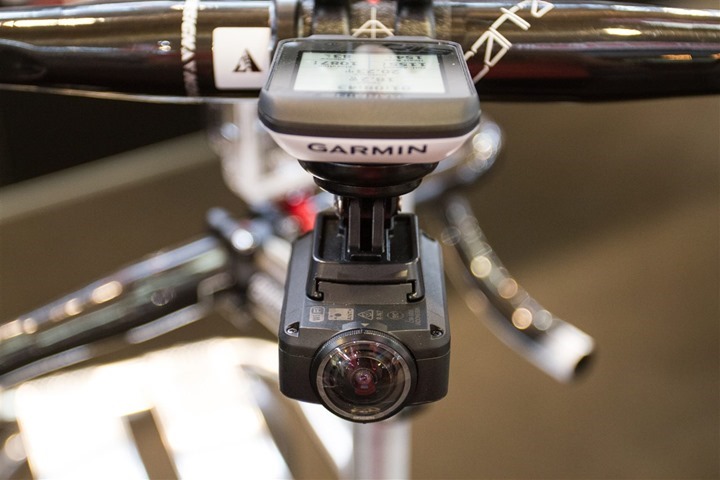 For cameras like the Sony Action cams, JVC and others – you can use an adapter to connect it to the tripod style mount system: 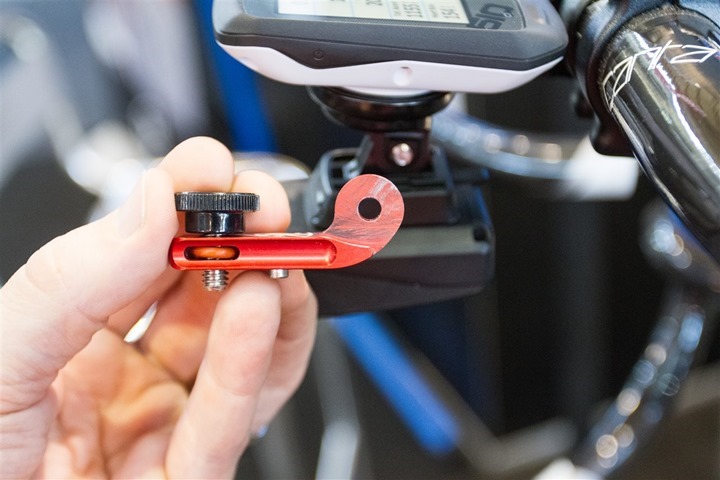 This adapter can be turned either front or back, effectively tucking in the camera further under the handlebars: 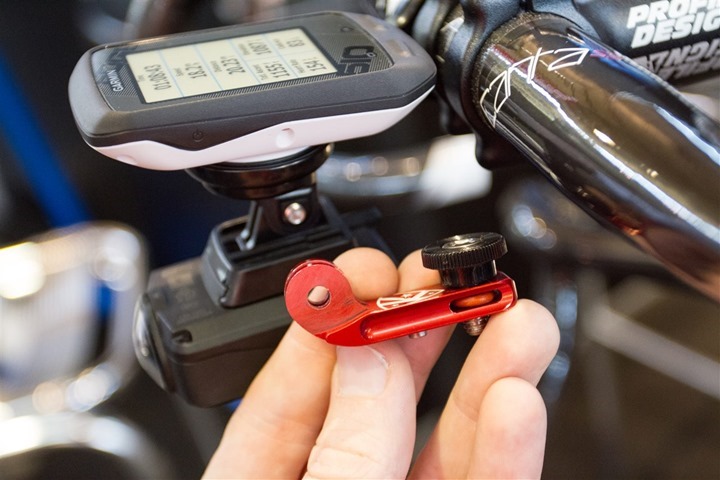 The action camera mount adapter costs $19 if you have an existing K-Edge mount, or is $15 more if buying a new package.  Note however that the only mount it’s not compatible with is the TT mount due to the lever system blocking the mounting holes, though they are looking at ways of making that compatible.  The mount adapter and packages are due out October 1st.

Many of you know that I buy and use K-Edge mounts for virtually all of my action cam testing.  The primary reason is that they’re simply more stable.  In the world of cycling footage, it’s all about stability that gets the cleanest footage (well, that and not crashing).

I haven’t however historically bought their bike computer mounts, as I’ve felt they were overpriced compared to the Tate Labs Barfly mounts (which I buy/use).  However, in the case of this product change, I’d probably look again at picking up their bike computer mounts to attach the adapter too.  Also, we’ve seen their prices dip down quite a bit over the last while.

Speaking of Tate Labs, they do indeed have a similar combo system that they unveiled back this spring, though I haven’t seen it in person.  Hopefully I’ll be able to find them either here or certainly at Interbike in two weeks.  Though, in most cases the Barfly systems are made out of plastic rather than metal, so you’re going to get a bit more flex there than with the K-Edge. 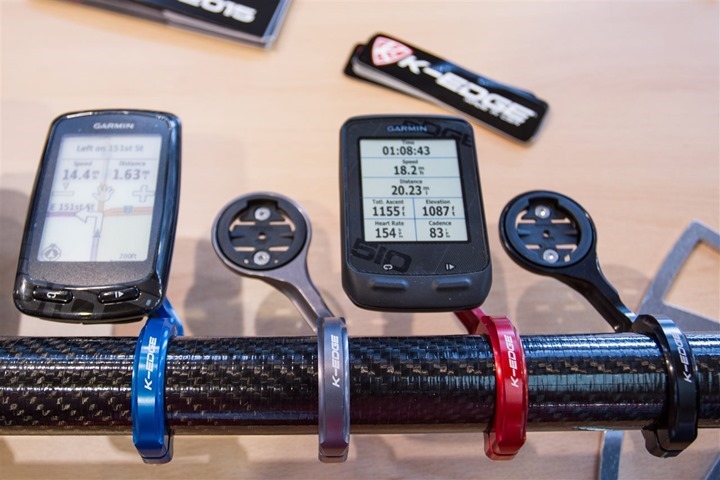 Next we’ve got a new mount that was custom-made for Team Sky just ahead of the Tour de France.  Team Sky uses Garmin Edge 510’s in conjunction with Stages Power Meters to track their metrics.  They’d previously been using one of the older model K-Edge mounts, but apparently in doing some wind tunnel testing they found some areas they wanted improved.

As a result they asked K-Edge to redesign it for better aerodynamics.  K-Edge then took some specific recommendations from Team Sky on design changes and then worked in aerodynamic flow testing software to make the new mounts more aerodynamic.  Of course, aerodynamics do often heavily depend on bike and rider configuration – and in general aren’t often terribly transferrable from me to you.  And even that, K-Edge admitted the gains were probably…’marginal’.

Nonetheless, this new mount will now be available starting October 1st, at $39 in all four colors seen above, effectively replacing the older small-mount system (same price).

You can see it sits a bit closer to the bar than the previous mounts did (which were further out).  This means it won’t be compatible with the Edge 1000, but will still retain compatibility with all other units I listed at the top of the post for their other mounts.  Below you can see the difference between the larger mounts at left and the newer mounts to the right: 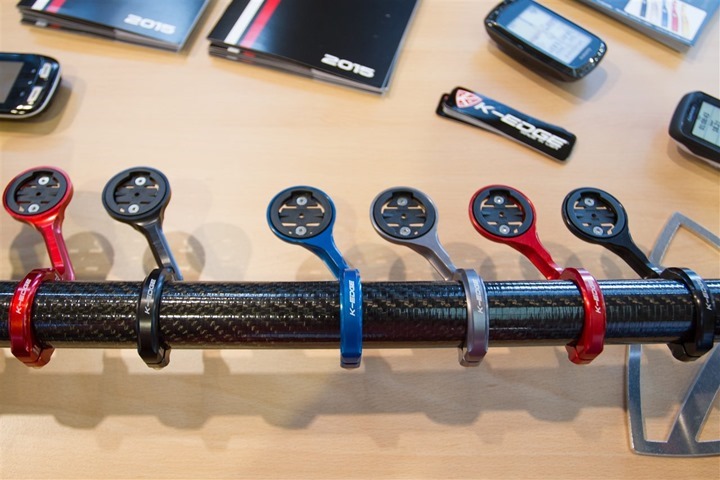 Last but not least, I asked whether or not they were planning on looking at building mounts for other bike computers – like O-Synce or the PowerTap Joule.  They noted that they are talking to other companies, and have recently added in support for Cateye mounts: 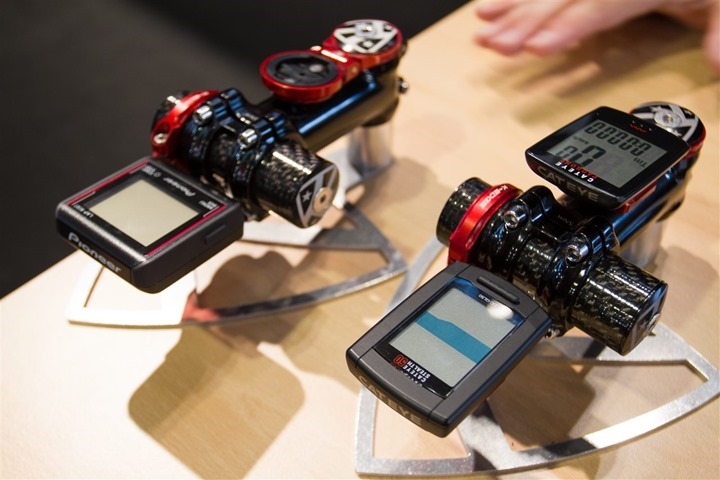 These Cateye mounts match the same pricing as the Garmin mounts, which is $39US for the handlebar mount, and $49US for the TT (time-trial)/tri mount. 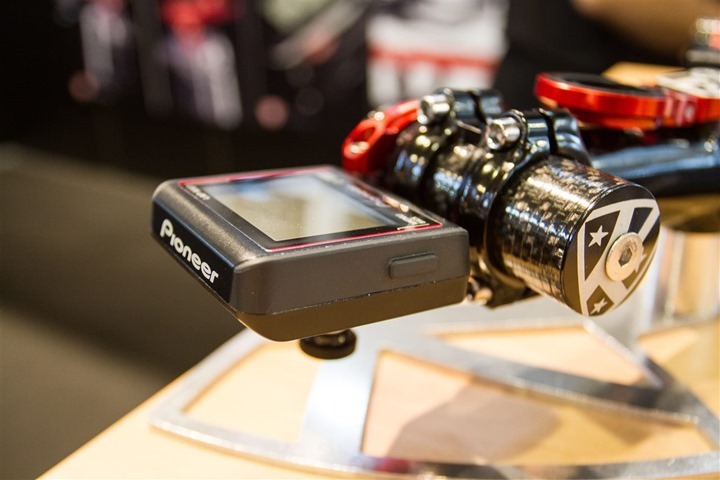 Last but not least, they had a new Pioneer mount on hand.  This mount was used by their pro team athletes at the Tour de France this year, and will be available on September 1st for $59US.

The mount is cool in that it has a bit of a different locking system – far cleaner than that of the default mount provided by Pioneer with their head unit. 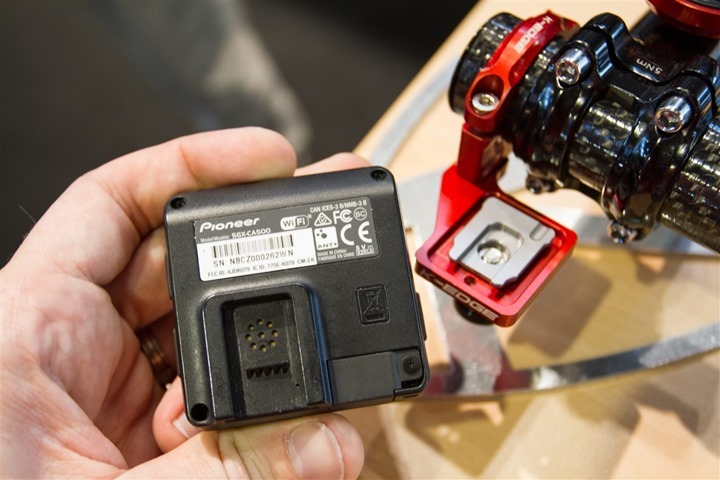 I’m currently testing the Pioneer Power Meter along with this specific head unit (this is their V2 head unit), and so the K-Edge folks handed over a unit for me to test in conjunction with my Pioneer testing. 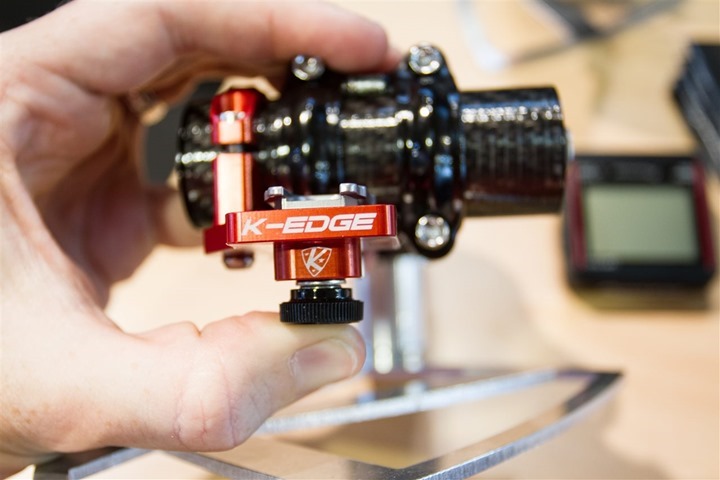 Like the TT mount however, this one isn’t compatible with the GoPro adapter due to the locking mechanism.  I’ll post my thoughts on that included with my Pioneer Power Meter Review.