Now that I’ve got a fair chunk (but far from all) of Day 1’s sports technology posts knocked out, I figured I’d give a walk through of some of the more entertaining aspects of the day.  As well as just some random odds and ends I saw as I walked around.

First up though, was entering the massive convention center in Friedrichshafen.  It’s in Germany, though I’m staying in Switzerland…across a lake.  More on that at the end. 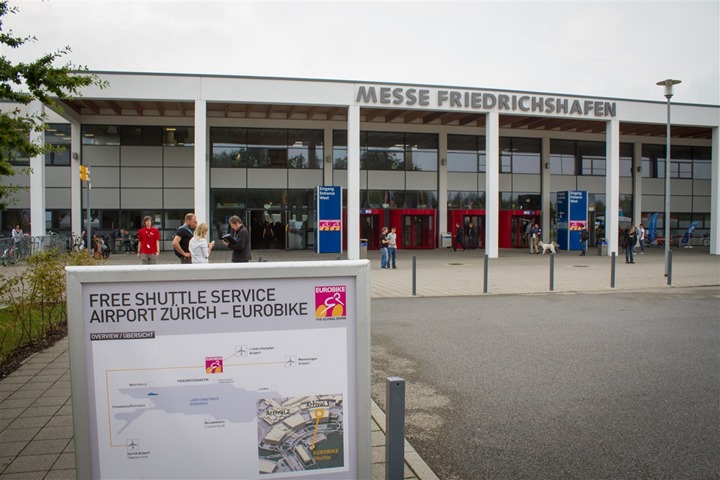 The entire convention is huge.  You can see the map below, each one of those blue blobs is a ‘hall’, as will follow in the picture after this one. 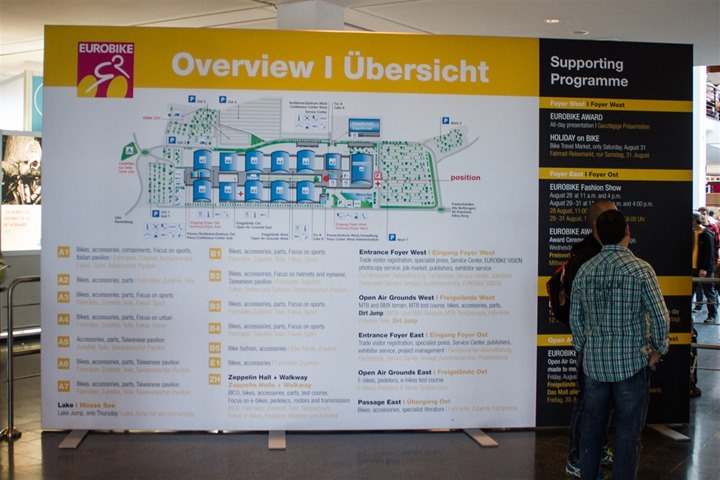 This is what just a single hall looks like.  It’s massive – far larger than a football field (or soccer, or any other field for that matter). 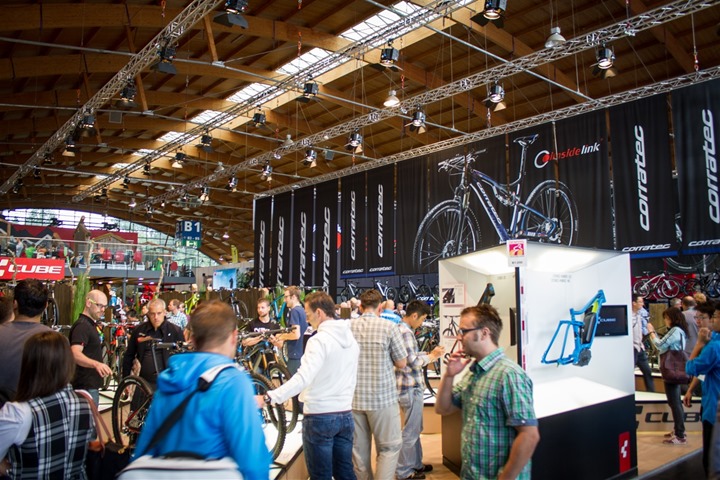 Inside them are huge booths by pretty much every company in the industry.  In some cases you’ll see smaller brands sharing booth space – either under a distributor, or just a few companies splitting the ‘tab’.  Even the smaller booth spaces close in on $10K for the four day event.  The Giant booth space below was…well…giant.  I can’t imagine how much it cost for the space, staff, and then the booth structure itself. 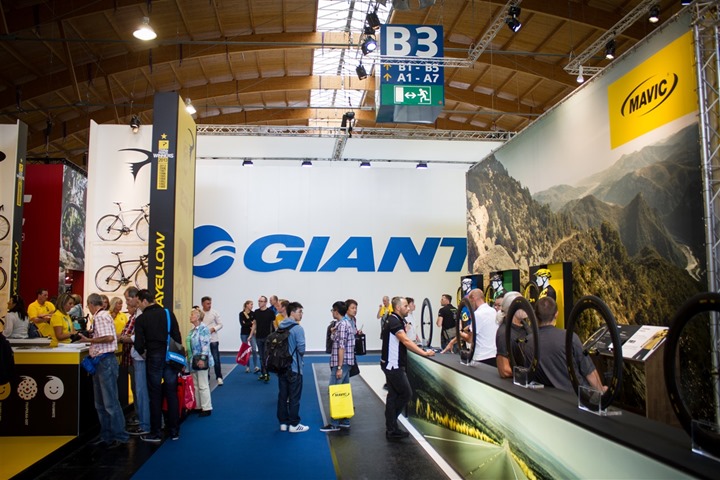 There’s all sorts of creativity in booth design.  Like, ya know, building a barn. 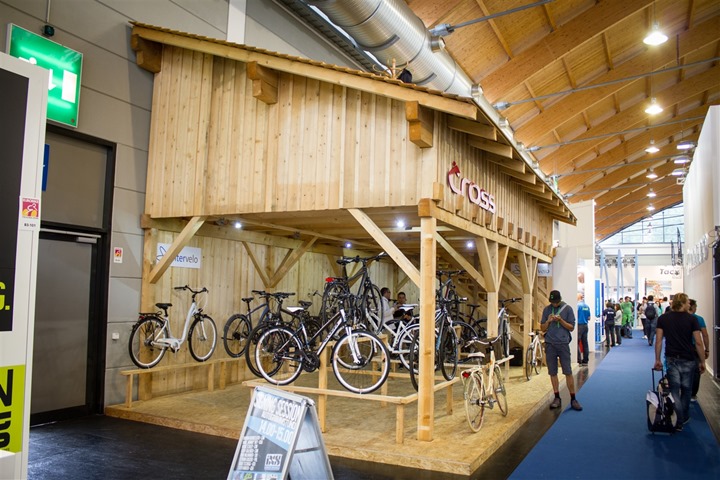 For cycling companies, the booths are packed with more bikes than you’ve ever seen.  A Noah’s Ark of sorts.  Except, a Noah’s Ark after it’s been at sea for a long while and the bikes have had time to breed baby bikes. 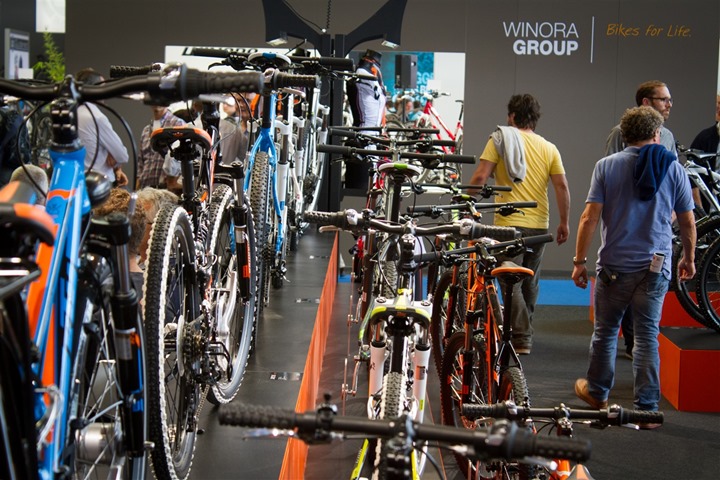 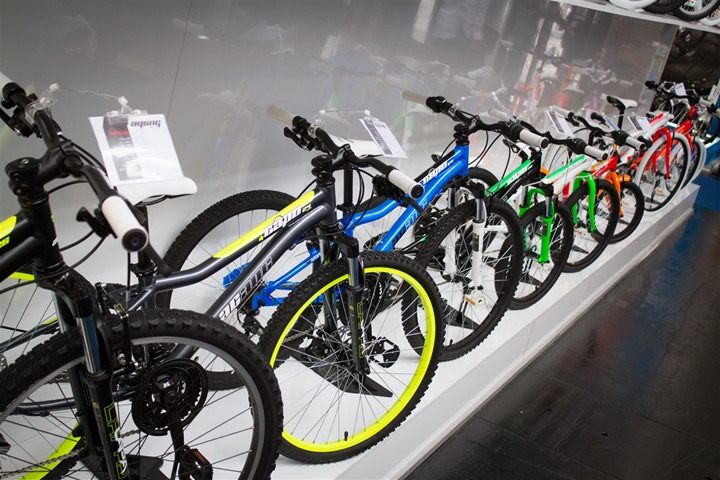 Sometimes the wrong bike species do the romance dance.  For example, below we have a bike, a deer, and a desk. 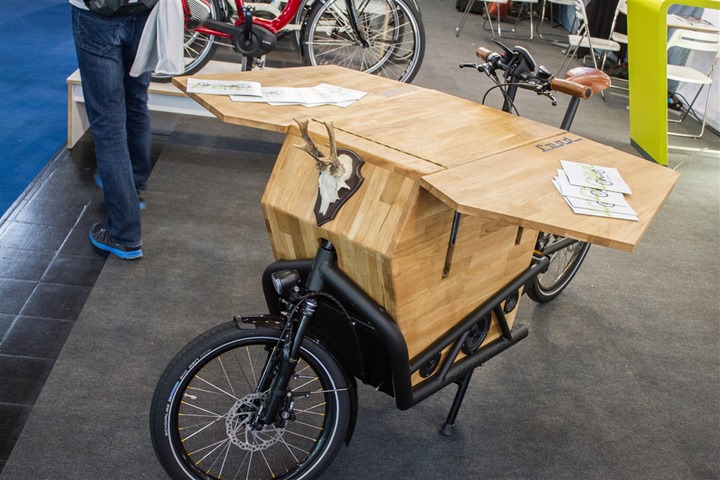 Or, the always favorable chainsaw bike: 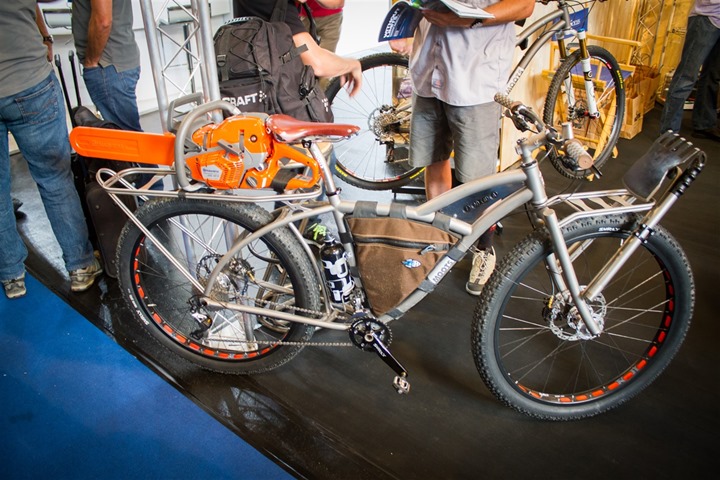 This bike didn’t hide anything, or mince words: 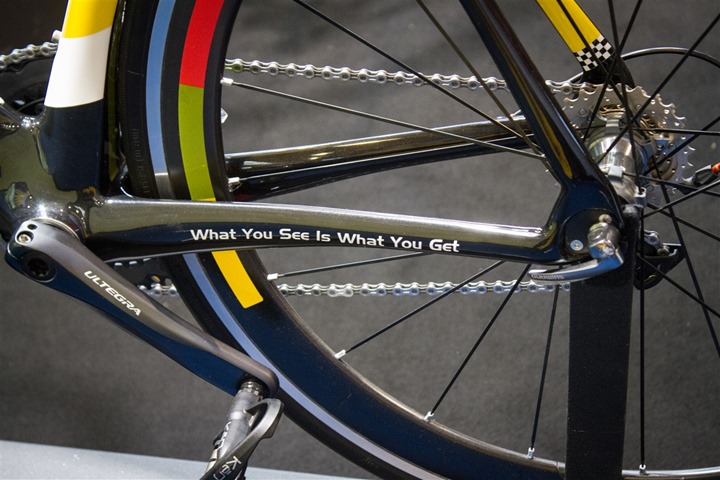 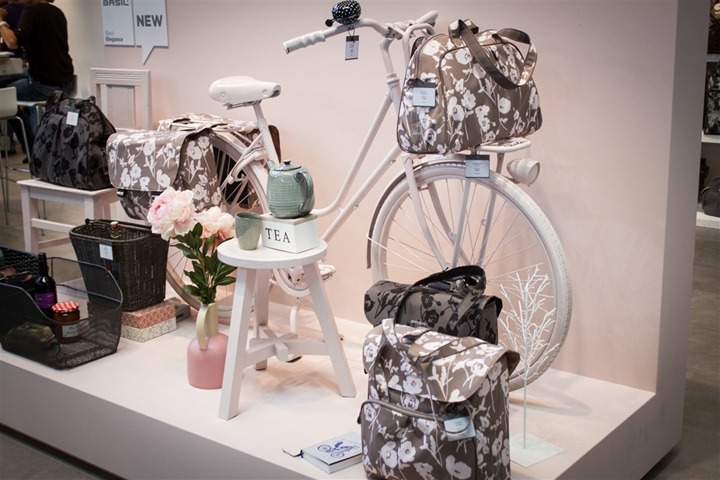 Or a watermelon.  Which, btw, is a totally awesome helmet to have. 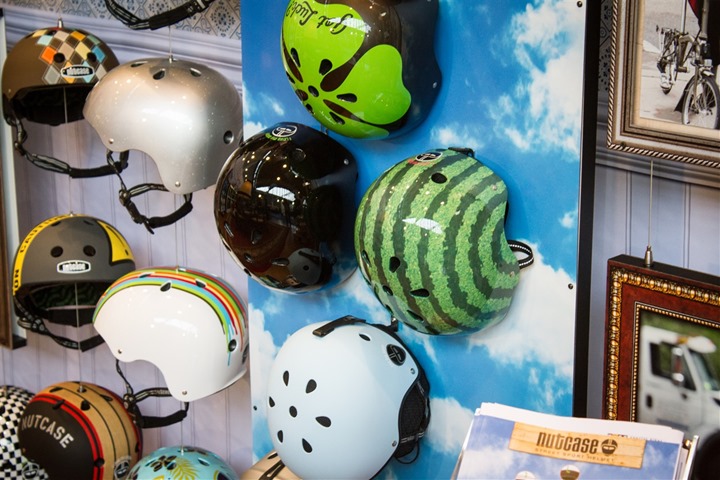 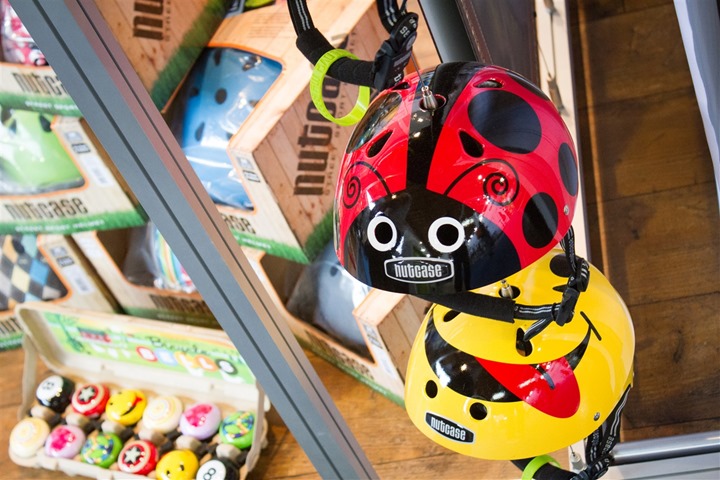 The booths have all sorts of antics to try and get you in.  For example, the time-honored tradition of tossing a cycling glove against a dartboard while narrowly missing civilians passing by: 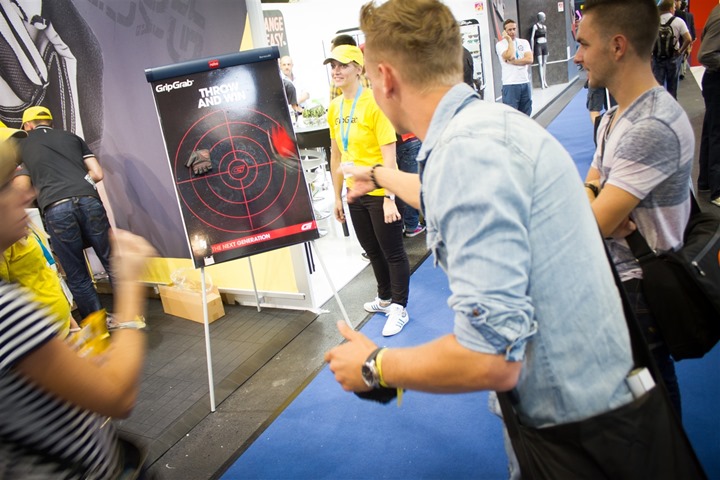 Or bringing in some sort of ancient times warrior that must have lost a previous battle with the lady in pink below giving him the stink eye. 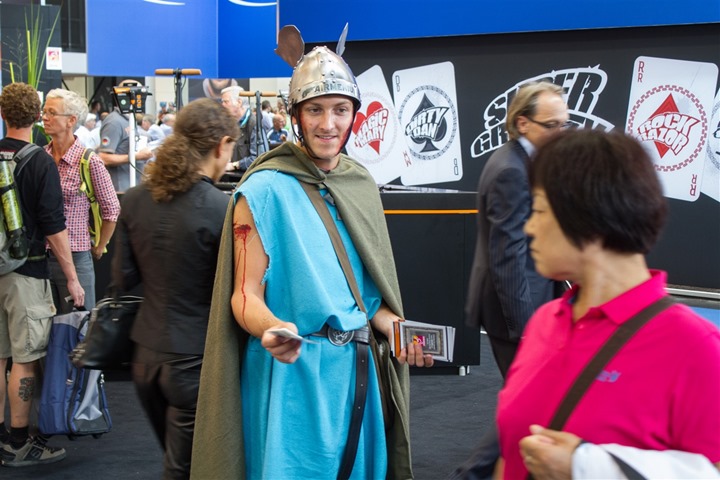 Then we have this booth – perhaps my favorite (though I didn’t get any) – complete with a full on wheel of parmesan and leg of ham.  I’ve argued we should have this in our apartment all the time.  Somehow, I’m losing that argument. 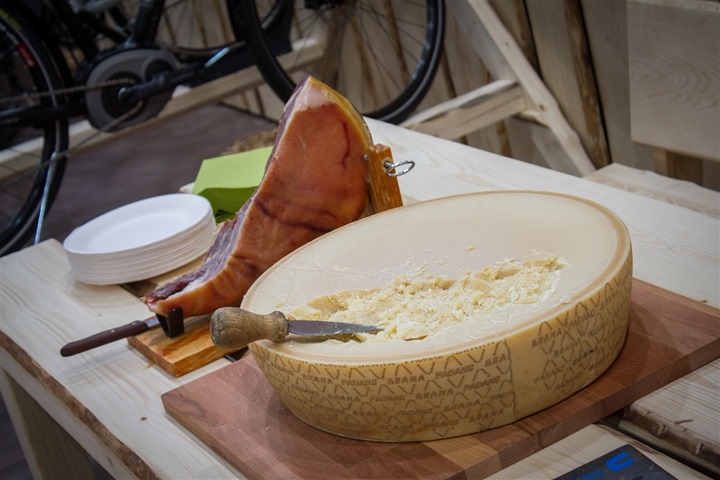 Failing any of those tactics, you could always just go the route of topless booth ladies.  However, I did note that the trend continues that most cycling folks actually steer away from booths with so called “booth babes”.  I’ve seen this the case at Interbike as well in previous years – and the same was true here too. Their booth was pretty much empty. 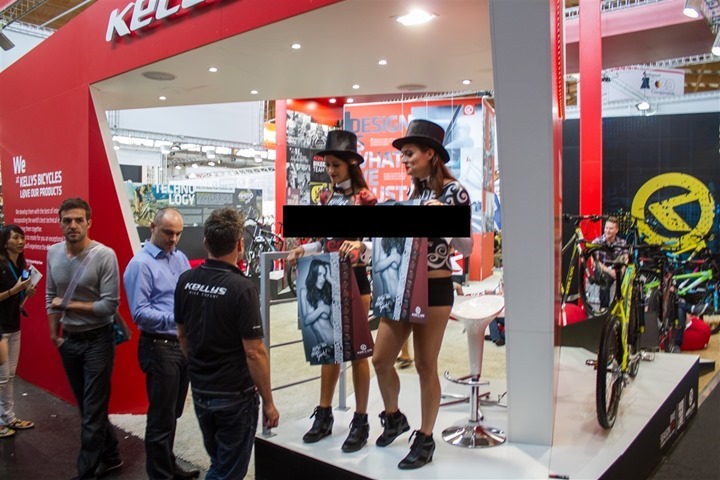 While the below massage ladies were quite available early in the morning, by late afternoon things had filled up as people started slowing down. 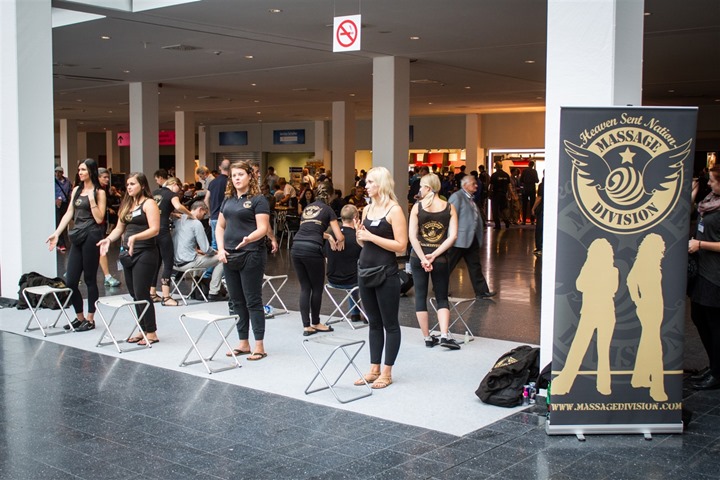 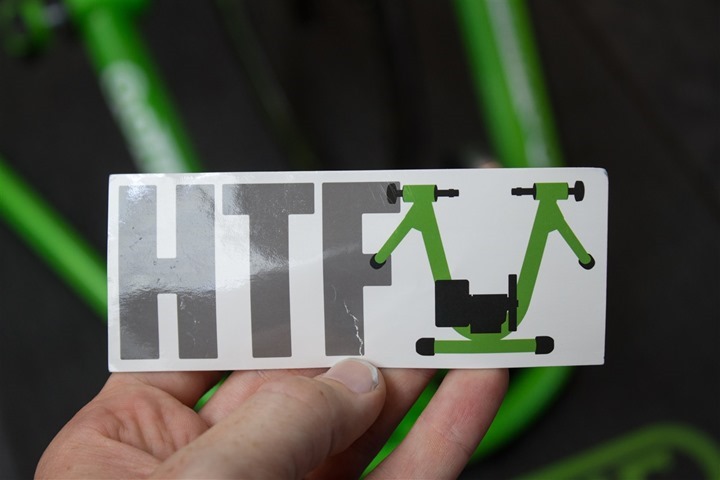 Though, I did make one stop for lunch.  Actually, two stops. I had lunch twice – since I skipped breakfast. I figured it was a fair trade.  Who wouldn’t want sausages twice? 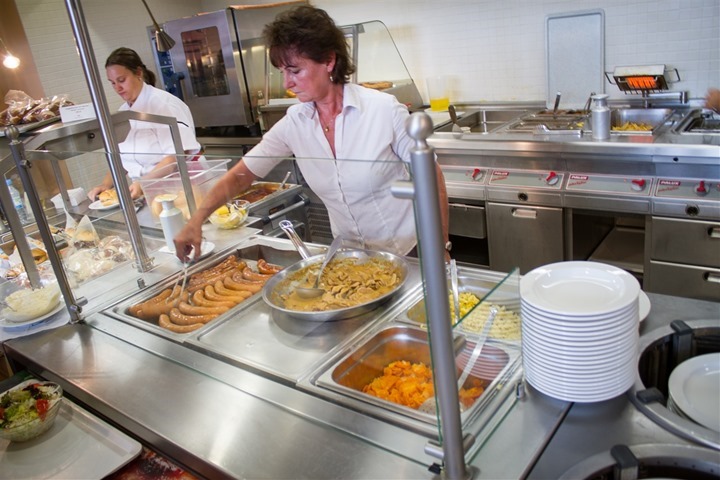 Then there was seeing the Chancellor of Germany.  She was up on the big screen when I walked by: 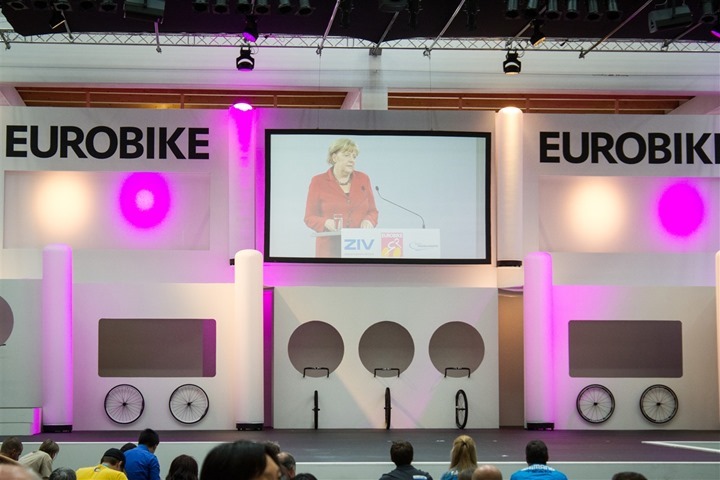 Then, about 10-15 minutes later when I was moving through a hallway, I got caught up in a big crowd just as she came through to one of the booths: 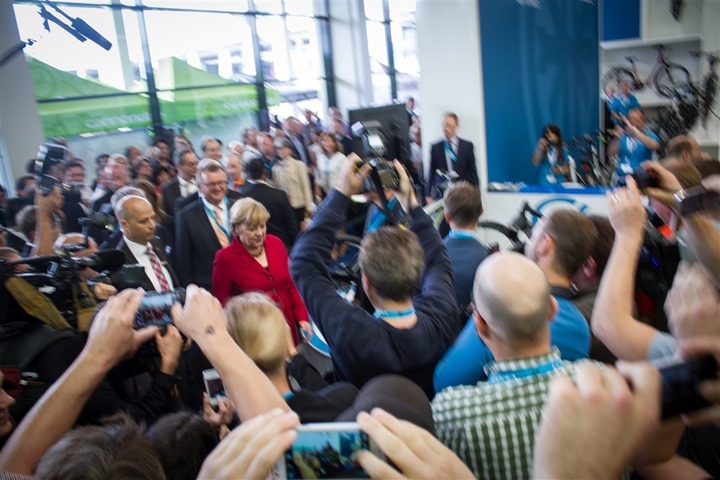 A pretty cool highlight for the day!  It definitely doesn’t happen all the time! 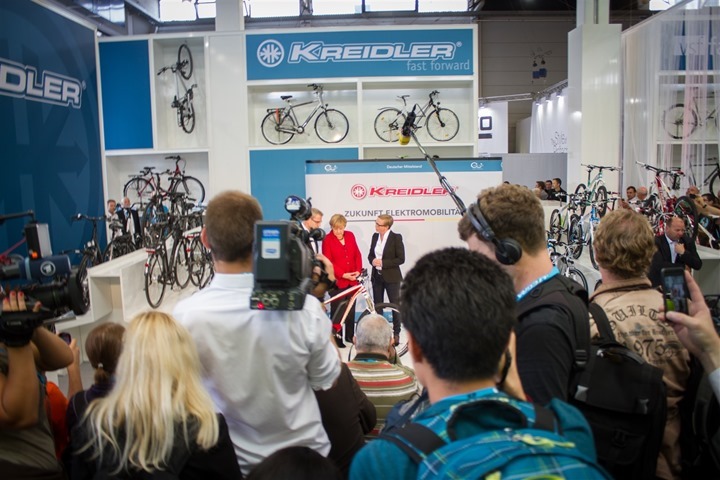 I’d have meetings till just after 6PM (while starting before 8AM) before heading out to catch the bus to the boat. 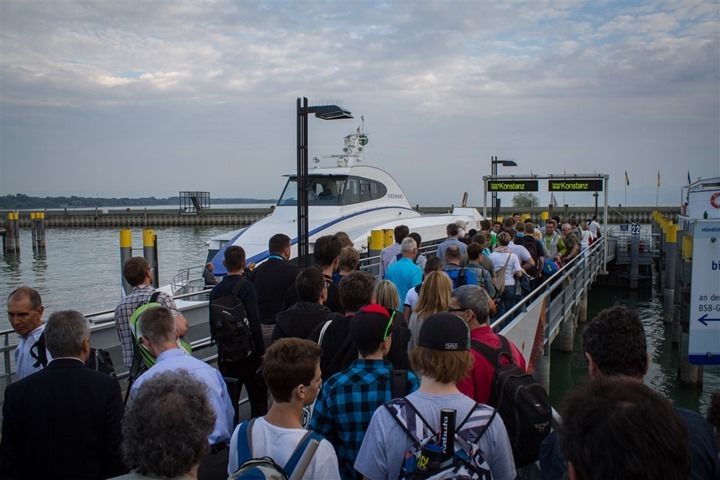 The boat in turn would float 45 minutes across the lake.  From there I’d spend 5 hours at the McDonalds writing posts.  Why McDonalds?  They’ve got awesomely fast free WiFi and a near unlimited supply of Diet Coke.  And McFlurry’s (Snickers!).

Following that I’d walk across the border through the backwoods.  Yes, walk.  A small little gravel trail with a tiny signpost indicating I was crossing from Germany to Switzerland.  That’s all.  No border crossing or anything else.

A few hundred yards later I’d arrive at my hotel – which happens to double as a soccer (football) arena. I didn’t fully grasp that when I booked it.  I just saw that it had WiFi.  But it’s otherwise a fully functioning indoor soccer arena with about 20 or so rooms.  Not at all fancy rooms.  Just simply cinder blocks painted white and simple non-destructible furnishings.  But again, WiFi.  So, I’m happy. 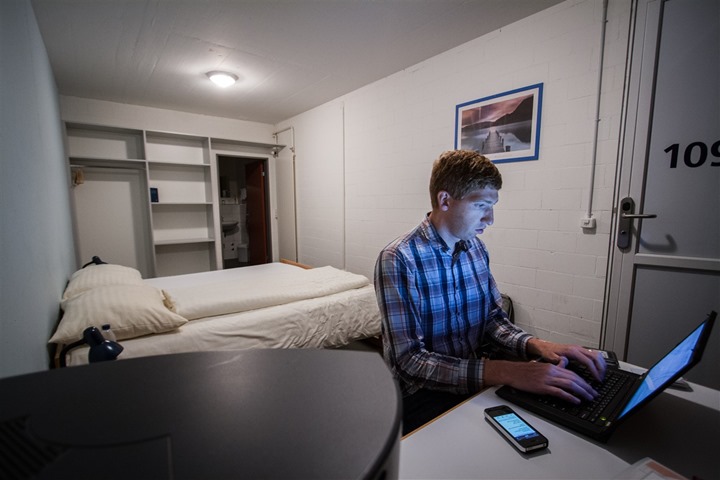 With that, back to another 3-4 hours of posts.  Thanks for reading!