Hands on with the ICEdot helmet crash notification alerting system

Today I had a bit of time to spend checking out the newly announced ICEdot system, which will help automatically notify emergency contacts in the event of an accident while on your bike.

The system is a combination of a Bluetooth Low Energy sensor that mounts to your helmet, in conjunction with an app on your phone.  When a crash is detected, it’ll automatically start a countdown timer on your phone, which in turn will notify your emergency contacts of your not-so-great fate, including letting them know exactly where you are.

Because this is much easier to show off in photos than text, I’m going to do that first, and then I’ve got a video that shows the whole process from end to end – including triggering it.

First up, is starting a session on the phone.  Just like you start your GPS device when you start a run – you simply start the app in the background and let it do it’s monitoring thing.  This also wakes up the Bluetooth Low Energy sensor.  As part of this it ensures that the app doesn’t just randomly trigger because you tossed your helmet in the backseat of the car before a ride. 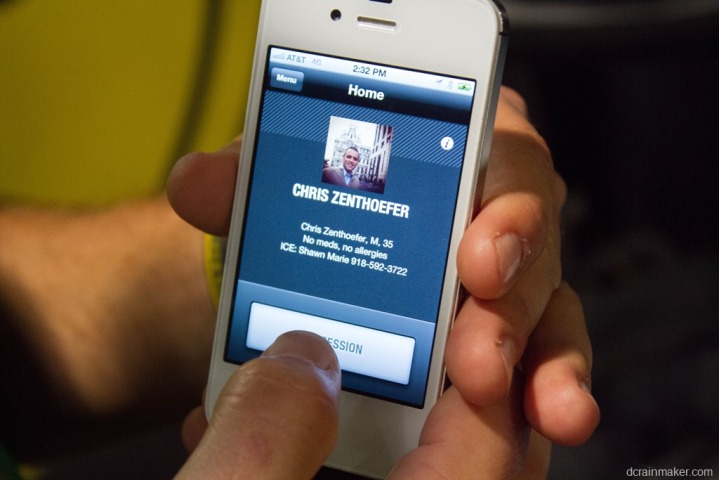 Next up you’ll notice the ICE sticker is affixed to the helmet. In the background you can see the app is running and monitoring for impacts. 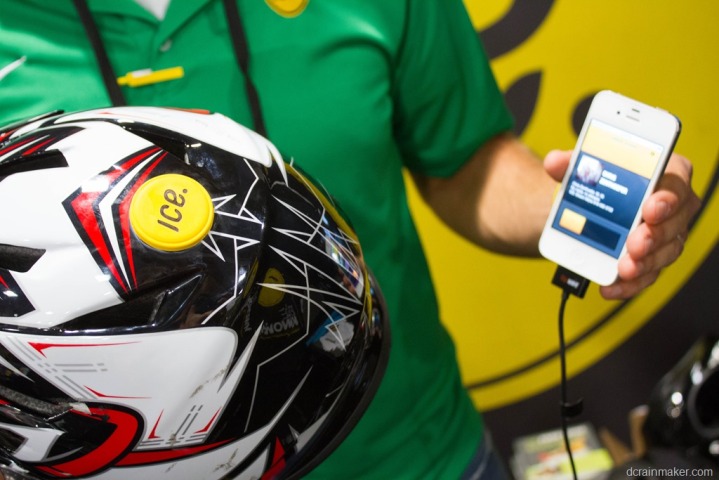 After an impact is triggered (in this case, he just whacked the helmet against his boot), the unit will trigger the app via Bluetooth Smart, causing the app to in turn initiate a countdown.  The countdown is configurable, so you can specify anywhere up to 2 minutes of delay.  You can stop the countdown at any time with a simple swipe.

This is to prevent any non-injury sustaining crashes from notifying contacts.  You know, like when you forget to unclip at a light and fall over harmlessly.  No need to broadcast that unhappy panda moment to the world. 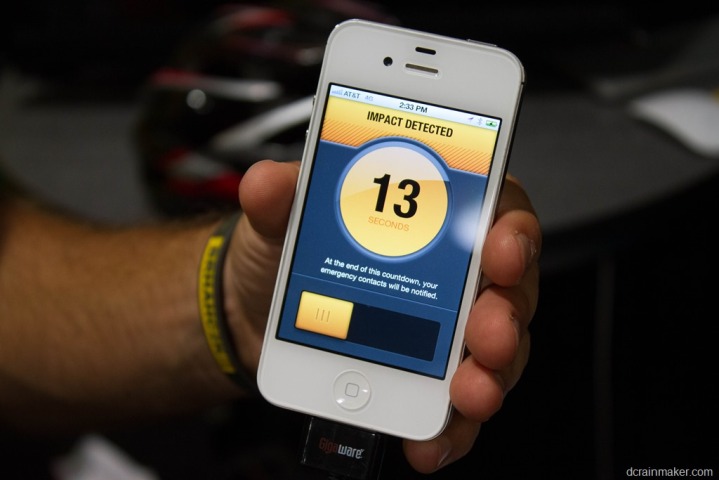 Assuming you don’t stop/override the countdown (because you’re lying on the side of the road in a bad state) – the phone will automatically sent notifications to your predefined emergency contact list.

You setup this list ahead of time, with who to notify.  Additionally, you also specify any medical related items to be aware of – such as allergies or medicines.  All of this information is then sent via text message to your contact list peoples. 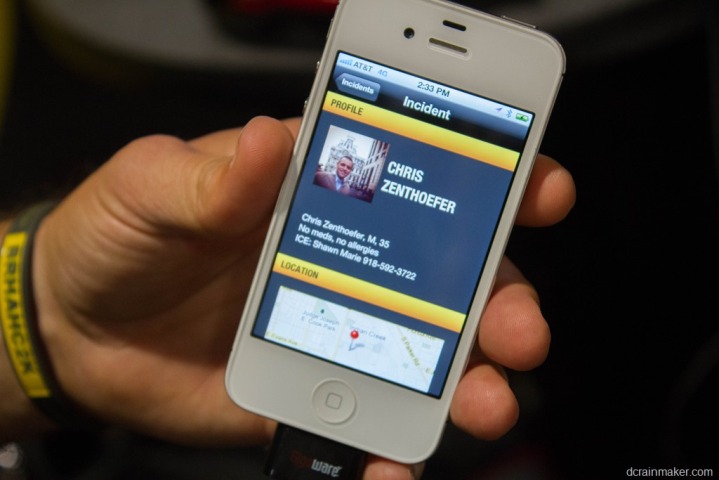 They then receive a text message formatted like the below.  The text message link includes the exact time of the incident, as well as a map and the allergy/medical information shown above. 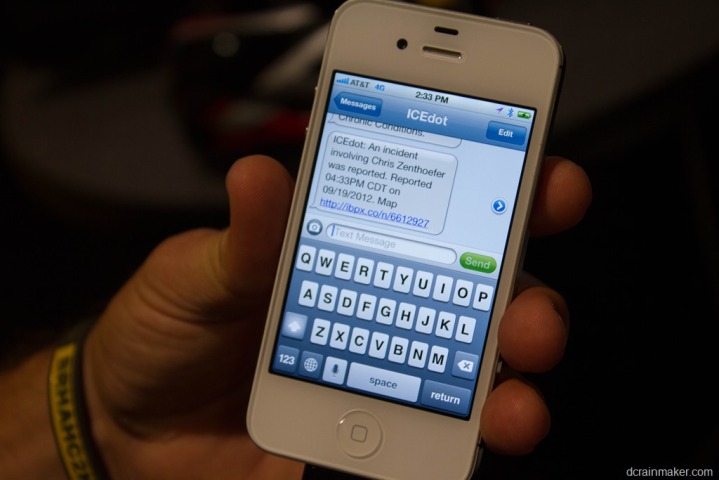 At present, the system can’t call 911 for you, due to the complexities in integrating with the 911 system here in the US (as well as abroad).

However, I’d think that if you put 5-10 close friends and family in there, at least one of them is going to be able to call 911 on your behalf in the event of a bad incident and get help to the right location.  If you have 5-10 friends, and none call 911 after they can’t get ahold of you (since most likely they’d call you first) – I’d suggest you may need to reevaluate your Facebook Friend Status with those peoples. 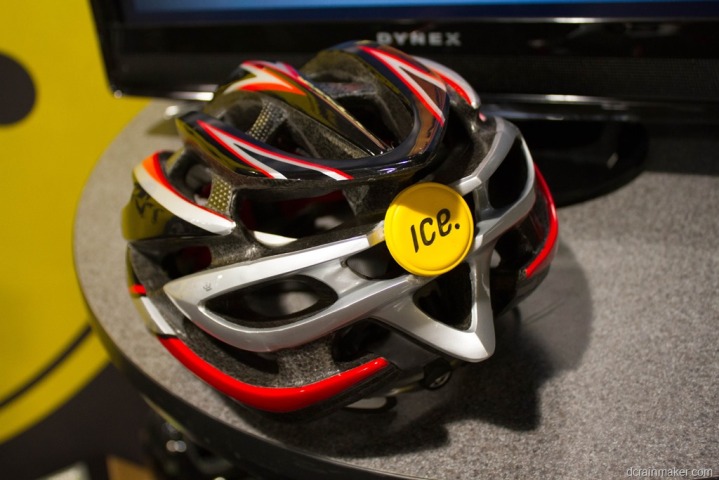 To piece all of this together, I shot the below quick video with the founder of ICEdot, which walks through initial activation through to triggering and then viewing the status update:

The sensor dot that you affix to your helmet today is using a CR-coin cell battery, but they’re going to be switching to a rechargeable unit that lasts about a month per charge and recharges via USB cable.

The only aspect I’m not super-excited about is the price.  It’s priced at $200, which, in my mind a wee bit too high.  I think that at that price it’s going to get far less buyers than at a much more reasonable $100.  Further, from a Christmas present giving standpoint, $100 is far more palatable to pickup one for the different cyclists in my family.  Whereas $200 adds up pretty quickly.  I understand the logic about it potentially being a life saving device, but, it’s still priced such that they reduce the number of people they could attract (and thus help more people in harms way).

Nonetheless, it’s cool stuff – really cool.  And I’m excited to see it come into the marketplace over the next few months.  They’re aiming for availability early next year (2013).

As always, if you have any questions – feel free to drop them below and I’ll get them answered for ya.