(Quick Heads Up: REI has the Garmin FR610 down to $299 (with the heart rate strap, usually $399) on some sort of temporary sale.  Thanks to all that sent this in.  And, that particular REI link helps out the site as well.  You have to add it to your cart to see the cheaper price.)

Today was a very very long day.  One could argue it started yesterday, nearly 4,000 miles away in DC.  Our flight from DC to Paris was delayed nearly three hours due to a cloud based electric light show.  People in IT always talk about ‘moving to the cloud’, well…our airplane wanted none of that action.

For reasons that aren’t entirely clear to me, I only got 2hrs of sleep on the plane (it’s not a super-long flight, only about 7hrs).  By time we got to Paris it was around 9:30AM.  After deplaning and customs, close to 10AM, and by 10:58AM we had arrived at our hotel in the heart of Paris.  Just in time to zip over to meetings that I had.  From 11AM till 6PM, one after another like traffic reports.

Around 6PM, I headed back to the hotel and took care of e-mail for about 2 hours before managing to get about 40 minutes of sleep.  At which point, it was time to run!  I didn’t want to miss my run, since it’s important that I keep fitness levels fairly high for the next two weeks going into the Alcatraz triathlon.

The run tonight was a mixed tempo run.  The intensity fluctuated a little bit over the course of the run, somewhat alternating up and down without at 5 and 2.5 minute intervals (though 2 minute rest sections only every 15 minutes).  It’s a fun workout that I enjoy a fair bit, since it keeps things changing/shifting.

This time the trip was booked at the last minute, and the hotel options were somewhat limited for the holiday weekend (it’s a holiday here in France too on Monday).  But I found a place fairly close to Notre Dame, so I figured I’d try out a different neighborhood this time (compared to my last trip two weeks ago). 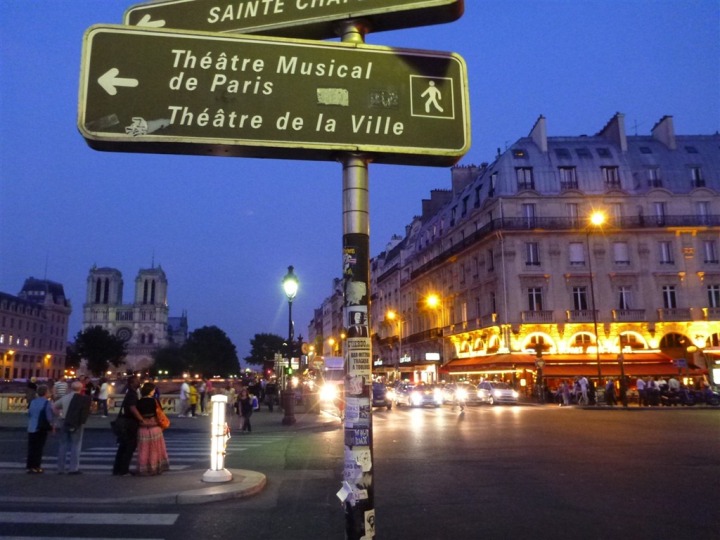 I started at the above sign post, which is roughly where the GPS unit finally picked up and figured out where I was.  I wasn’t helping matters by walking instead of just staying put.  Plus, showing up nearly 4,000 miles away from the last known location didn’t help either.

At the start of my run, the sun was just finishing setting (at 10PM!).  All these pics are taken just using my little point and shoot camera, simply on a ledge.  At mostly at either the beginning or ending of my run.  Since I forgot to put the SD card in it before leaving the hotel, I only had four shots to work with.

My run started from just outside of Notre Dame, and then continued downriver towards the Eiffel tower.  You can see it in the below photo out in the distance: 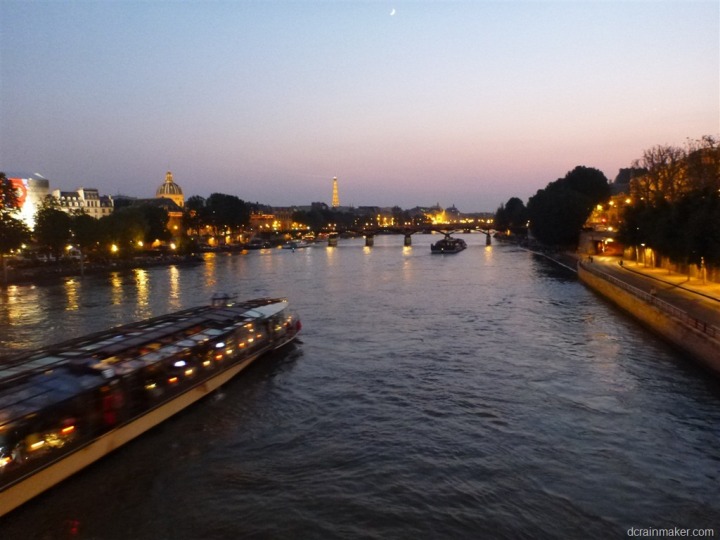 For the most part, I was racing one of the faster dinner river boats (actually seen above).  We were going about the same speed, roughly 10MPH.

The weather was fantastic this evening for a run.  A wee bit warm and humid, but it brought out lots of people – so it was fun to just enjoy the vibe of the city around me.

My route along the way would rotate me back and forth across the bridges, simply based on whether I would hit a stoplight at an intersection.  If the light was green or safe to cross, I’d stay on the same side.  Otherwise, I’d bail across the bridge and usually succeed at crossing on the other side.

Here’s a map from the Magellan Switch UP GPS unit of tonight’s run (I was doing 200m intervals at the end in the lower right back and forth on an empty street, hence the squigglier overlapping lines):

By time I got back, sunset was no longer.  But Notre Dame was still quite illuminated, just hanging out there greeting my return. 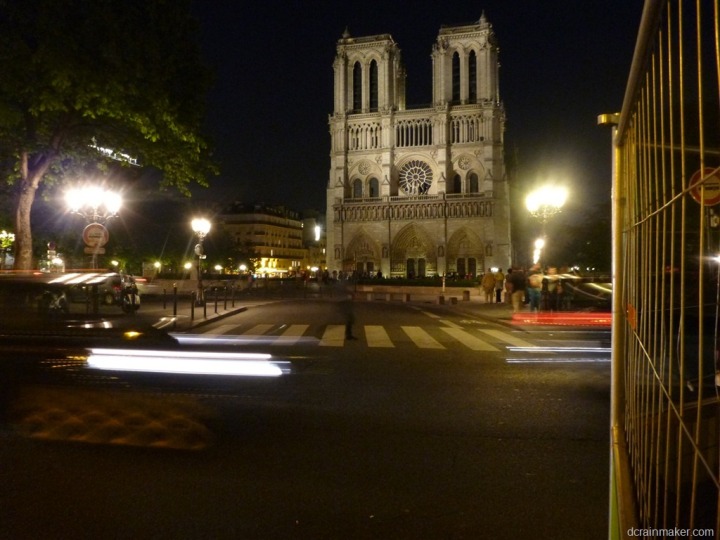 At this point, now past 11PM, it was time to head back to the hotel, take a quick shower and change – and then find some food. 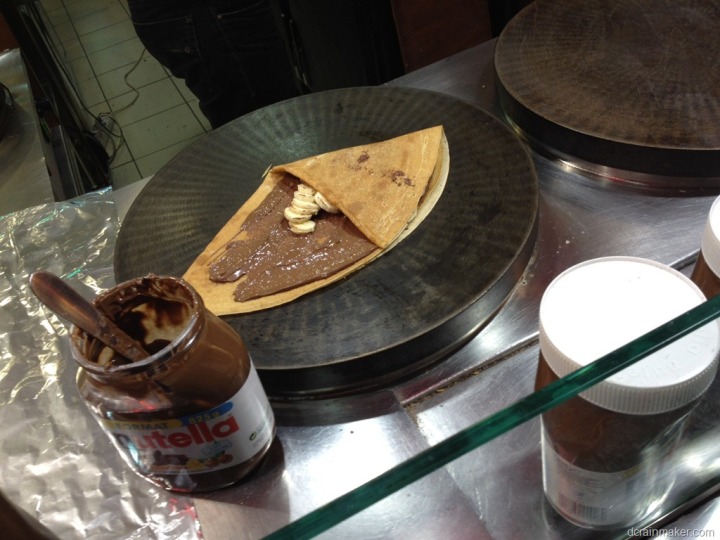 With that, off to bed for another round of meetings tomorrow before getting to enjoy the long-weekend ahead here in the city.

Oh P.S. – For you local Paris folk, if you have any recommendations for a good place to rent a road bike or two, that’d be greatly appreciated.  Something that can do about 50-miles.  In other words, not a Velibe bike. 😉