Running at night on the National Mall

I’ve recently remembered again how much more interesting long runs are when you can do them point to point.  If you’re like me, and are essentially doing a weekly long run almost year-round, you’re probably a bit worn with your normal routes.  And while it’s great that I can tell you every speck of out of place concrete and asphalt on the Mt. Vernon Trail – it’s not conducive to me enjoying my long runs.

While I certainly could drive somewhere else and then run from there in a big loop, that tends to cost a bunch of time driving both ways.  Instead, the past few weeks I’ve been running one-way from the house to another location, where I’d meet The Girl.  In both cases, it just worked out she was going to be there.  Last weekend I ran one-way…although up-hill and into 40+MPH winds.

This weekend, I decided to go one-way to the various monuments downtown, and then do a big loop of all the major ones.

Before I headed out, I started to go to MapMyRun to double-check the mileages on my planned route.  Then I realized I had a Garmin Connect window up, so I just used the workout creator in that.  For the purposes of this particular run, GC actually worked better for the sole reason that I didn’t have a bunch of annoying pop-up ads.

By time I plotted my route, it was a touch over – at 15.75, so I figured when I went to actually run it, I’d just cut off the diversion to the White House, which would ultimately make it within 100y of perfect.

With that, I got ready to head out.  I had a bunch of things I wanted to test on this run, and since my run was pretty mindless – it would be perfect for testing (for those curious, it was simply 10mi @ Z2 pace (low 7’s), then 5mi @ 6:30/mile).  The first item I added was the 4iiii’s.  These are a heads up display attachment for your sunglasses that audibly and visibly keeps you informed of heart rate, pace, and cadence (and power, if cycling).

While my run would be at night (I wasn’t feeling good in the morning, and hoped by the end of the day I’d feel better) – I figured I’d at least get enough light during the first 45-50m to use the LED portion.  After which, I’d still hear the audible piece. 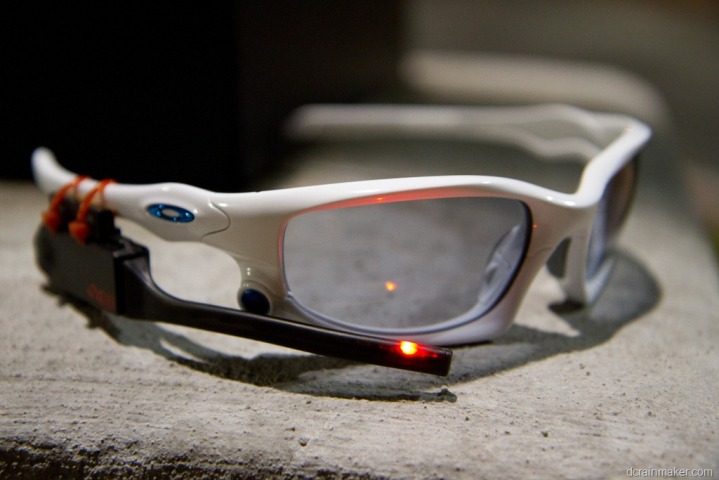 (I couldn’t quite get my photo in front of the Capitol with them to come out, so here’s one of my previous pictures of them at night)

During the run, they pretty much worked as expected.  And, it certainly cut down on me checking my watch for HR zone information – since it was clearly displayed and told to me.  For the mile sections at 6:30, I paid a bit less attention to it since I was more focused on ensuring that the pace that the Garmin was tracking was at 6:30, rather than the footpod-calibrated 4iiii’s pace (although, they were very close).

The next item I threw on was the FINIS Hydrotracker.  I’ve used this for its primary purpose – tracking while swimming – in Bora Bora, but actually didn’t have a chance to try out the final product with the armband attachment for running/hiking/cycling/moose chasing. 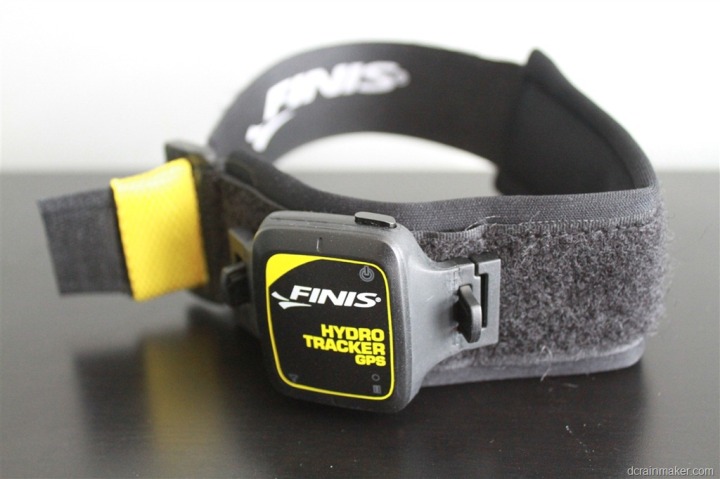 Unlike the 4iiii’s, this won’t give me any feedback during the run – it simply just tracks where I went.  Since it’s aimed for swimming, it makes more sense in that scenario (it attaches securely to your goggles).  For runners and cyclists, I’d probably just pickup a equally priced Timex Global Trainer (also $130ish these days) – since the battery life is the same, and does far more than the Hydrotracker.  But for swimmers, it makes a ton of sense.

At any rate, it worked just fine during my run.  It came up a bit shorter than the Garmin, though, I haven’t had a chance to see where it cut the route a bit short.  Could have been in a few of the tunnels.  Though, I was afraid to press the pause button since I negated to read that portion of the manual, so it included some stoplight/bathroom time. 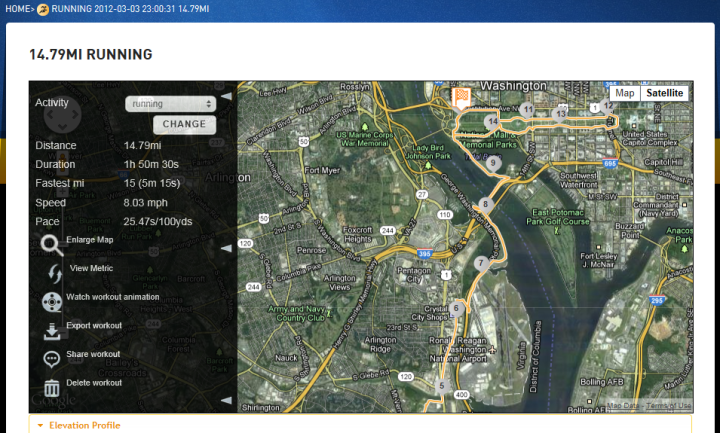 It worked out great that the 5×1-mile portions of my workout where in a gigantic loop between Lincoln and the Capitol, which, is almost precisely 5 miles if you run the perimeter of it.  The weather was probably the nicest night it has been this year, in the 60’s when I started the run, so definitely t-shirts and shorts weather.

And while there were bus-loads of tourists at the two ends of the Mall, there were very few in the middle sections.  This is what it looked like for almost that entire span: 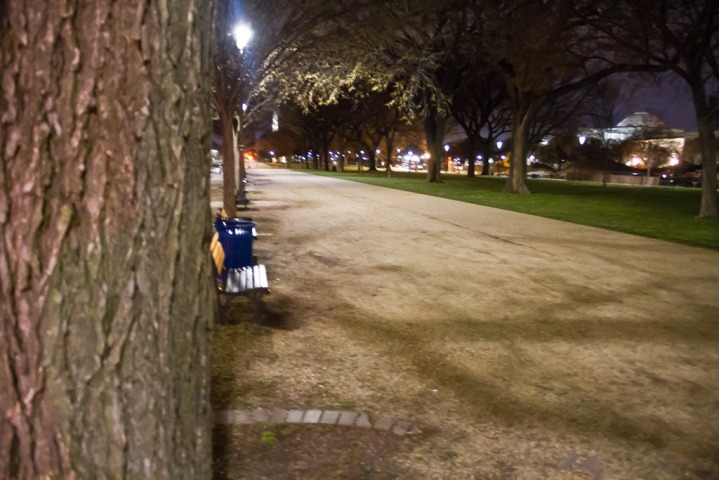 Of course, some of that was likely because of the construction that spans large chunks of the Mall, essentially making a giant sandbox out of it. 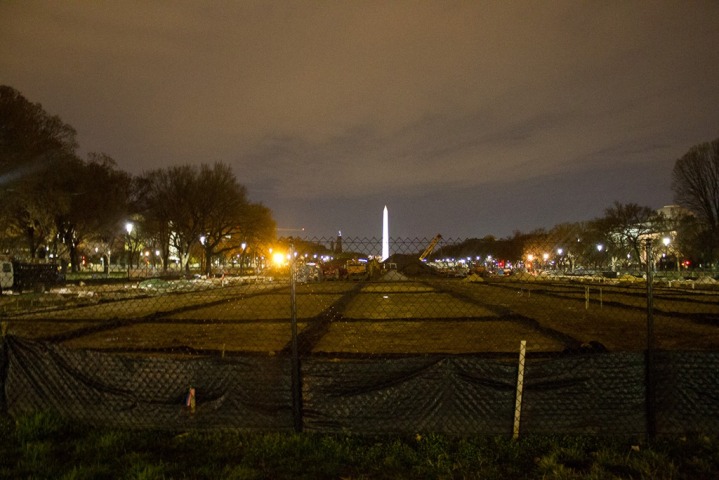 Once done, I met up with The Girl at Lincoln (where she had done a different run with loops around the Mall area).  After that, we took a bit of a wander down towards the Capitol.  Here’s me, post run: 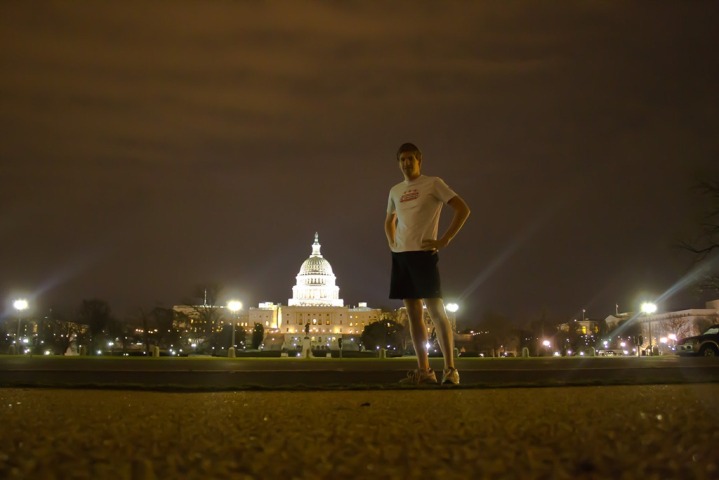 Finally, a few other things of note from this weekend…

I spent some time taking photos with the rolling pin, primarily for the RCX3 review.  You can see the difference in size between the RCX3 and the RCX5 on the left.  And even thickness wise, there is a slight difference. 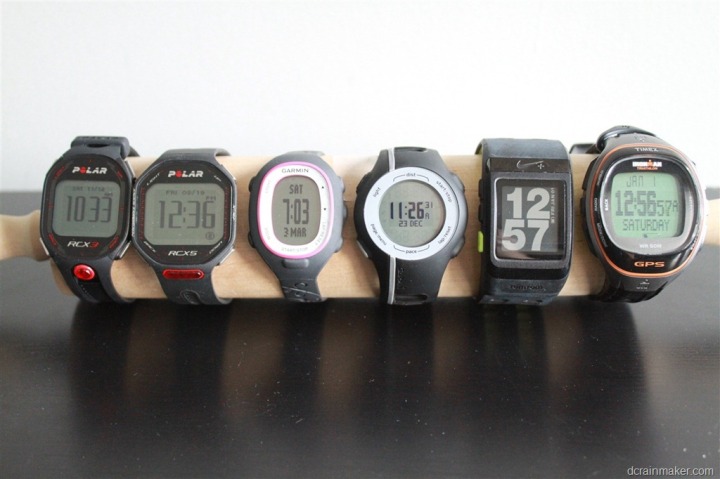 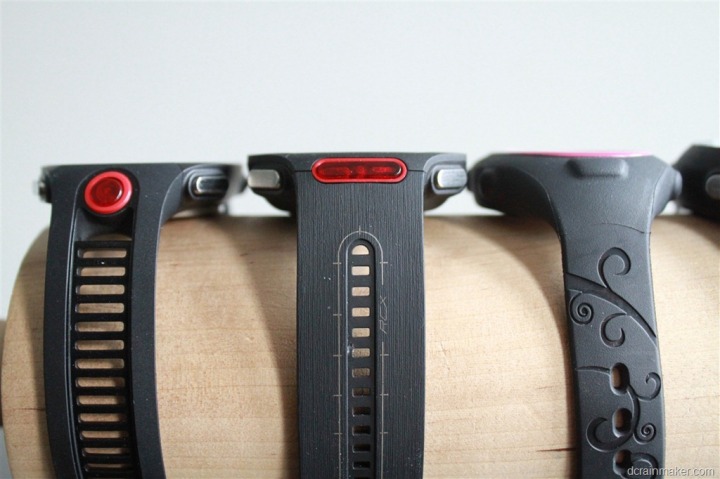 Of course, after taking those photos, I figured I might as well update some of my stock library for other watches…which eventually led to a rather interesting photo of a ton of watches, which a whole boatload of you commented on, on Facebook. 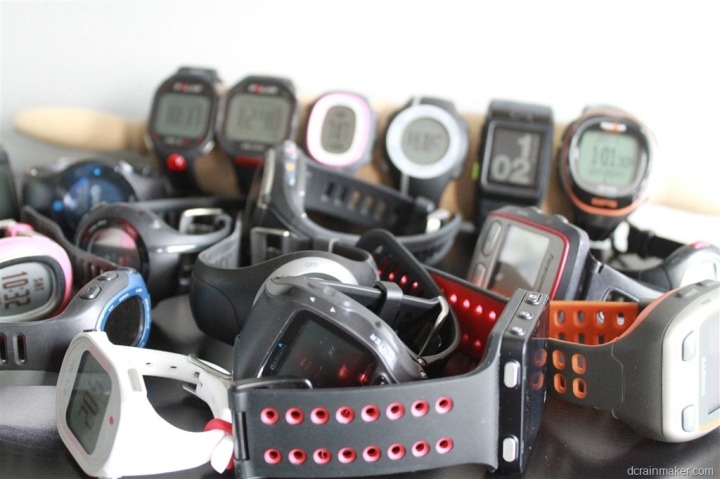 In an entirely different category, for those of you folks who travel quite a bit, you probably watched as United and Continental merged this weekend from a customer standpoint.  As a United frequent flyer, it’s been both good and bad for me – but, I’m always optimistic about change.

Ironically, just a few hours prior to the 1AM Saturday cutover, a box arrived via overnight mail from United, with my newfangled luggage tags – complete with the Million Miler status (interestingly, when they combined my mileage with Continental, I got an extra 300,000+ miles flown out of it…crazy! – up to almost 1.4 million miles on the two airlines and Star Alliance partners). 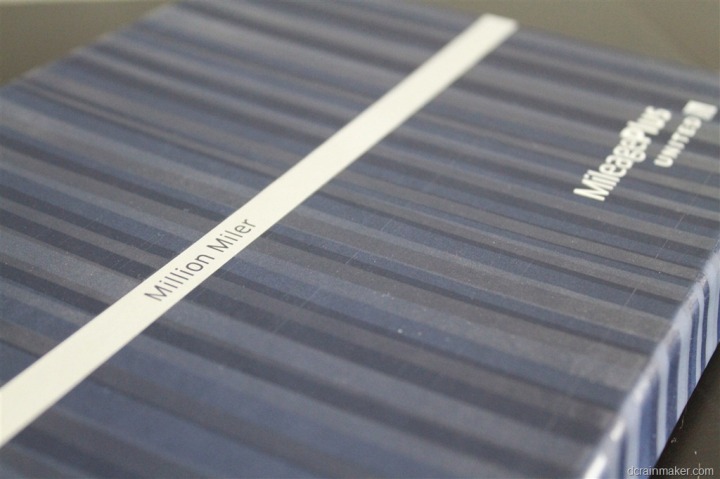 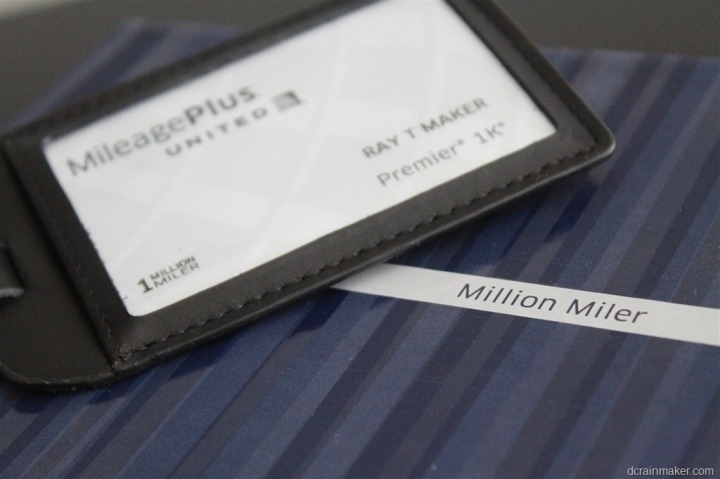 The rest of the weekend I spent hanging out with The Girl as she worked on new bakery projects (and a little bit of time in Old Town).  You may remember last year when I helped bake a gazillion cupcakes for a cupcake contest.  Well, as part of that same competition this year, she’s entering in a bunch of cakes.  So she’s doing all this work ensuring that all of her plans for various cakes she’s going to be entering are rock solid. (Btw, competition is March 24th, same day as the DC Multisport Expo…I’ll be at both!).

I’ve learned it’s sorta like training, except, for crazy cakes.  That way when it comes time to make the real thing, all of the decorative elements turn out the way she wants it.

As such, my role continues to mostly be testing goods.  And providing critical feedback.  You know, very manly items like explaining which fondant butterfly color combination looks the most appropriate.  Or offering my opinion on whether a silver of or ivory button would look best in her pinwheel toppers.

Which, finally brings me to one random picture of the weekend.  Saturday we went to grab pita’s in Old Town and as we were coming home we stumbled into a group of soldiers in costume from days past: 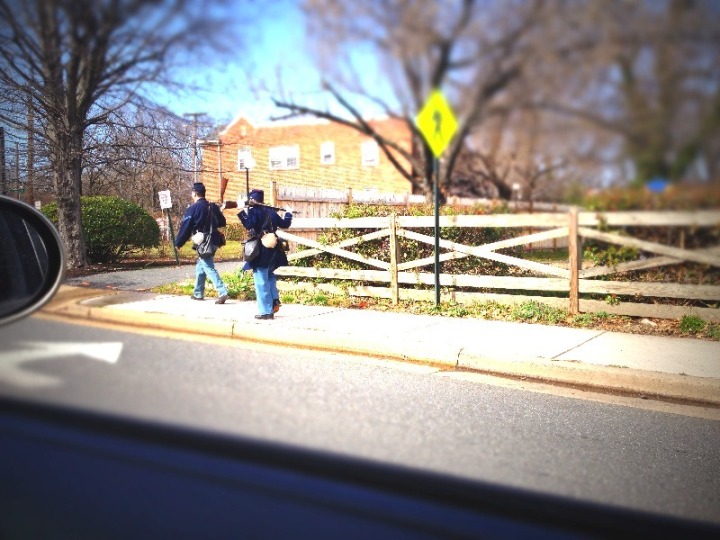 Since we were looking for a place to enjoy our sandwiches, we ended up following them up to the top of the Masonic temple, which looks over the city.  As we headed up the road, we snapped this picture of one guy working his way up the road – applied some phone filter magic, and called it macaroni: 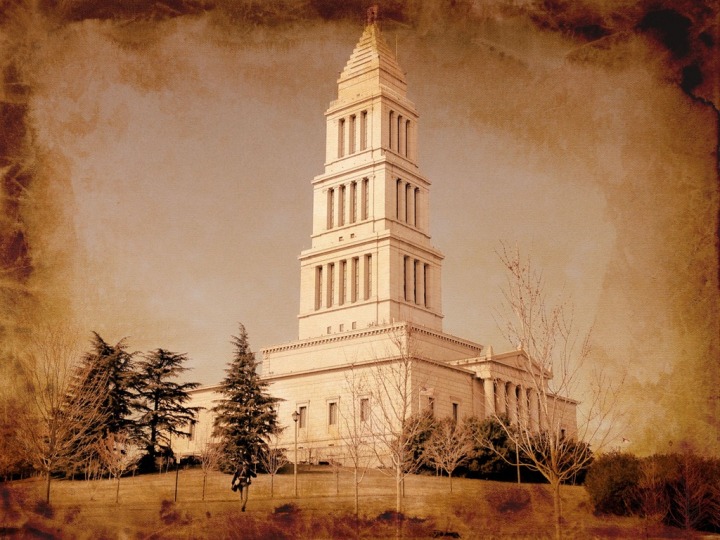 Just like it would have been a hundred or so years ago, huh?

(Actually, photographic side note…I watched like many other Canon photographers on Friday at the new 5DMIII DSLR…but, like some – was somewhat disappointed.  I wanted something to replace my 7D that didn’t just take nicer photos, but also solved some of my workflow problems.  None of these were offered in box, but instead, with new $700 accessories (and more bulk).  I had hoped we’d see integration with geotagging…like any $100 phone or camera can do these days, and I’d hoped we’d see direct Ethernet – like the D4 (or WiFi).  Alas, none of it.  Well, to be fair, I could put some EyeFi cards in the SD slots on the 5DMIII.  Great ISO performance increases though, which would be useful for me for, but not exactly $3.5K useful!  Also, I’ve been eyeing the new Lytro camera, which allows you to focus after the picture has been taken.  Price-wise it’s far more reasonable, but, low-light performance concerns me.  Though, it could be interesting for product reviews, to allow you to control focus on products.  Long term, I think this technology could be solid, but their v1 version of the product has be wondering if its best to wait.  What do all you photographers geek endurance athletes think?)

Thanks for reading, and enjoy your week ahead!