After all those, you’ve then got the US Patent and Trademark Museum.  It doesn’t make any tour guides, nor any ‘Top 50 DC Must See’ list, or really any other list at all.

But, it is on my very same street, just a touch over a mile from my house, and thus, I decided to pay it a visit.

For those not familiar, the Patent and Trademark Offices (PTO) handles intellectual property (IP) claims over all assortment of inventions, both physical and conceptual.  It’s been around a heck of a long time (in one form or another), since 1790 – yup, way longer than that half-drank bottle of Gatorade in my trunk.

I had heard about an exhibit that opened up in the main foyer this past fall, honoring Steve Jobs and his patents, and figured I’d go check it out since it was within walking distance.  At the end of the post we’ll cover that piece.  Oddly enough though, I didn’t even know that there was a museum at PTO until I noticed it off to the side while checking out the Steve Jobs exhibit.

Turns out that they have a small museum area that’s refreshed about every year with a new theme.

The space isn’t much bigger than a basketball court, and shares room with a small gift shop of PTO related goods (shirts, etc…).  When I entered the museum, I was greeted with a long list of folks that were inductees into the National Inventors Hall of Fame.  And I shall report that while I looked carefully for the person behind the Snuggie, I could not locate them on the list. 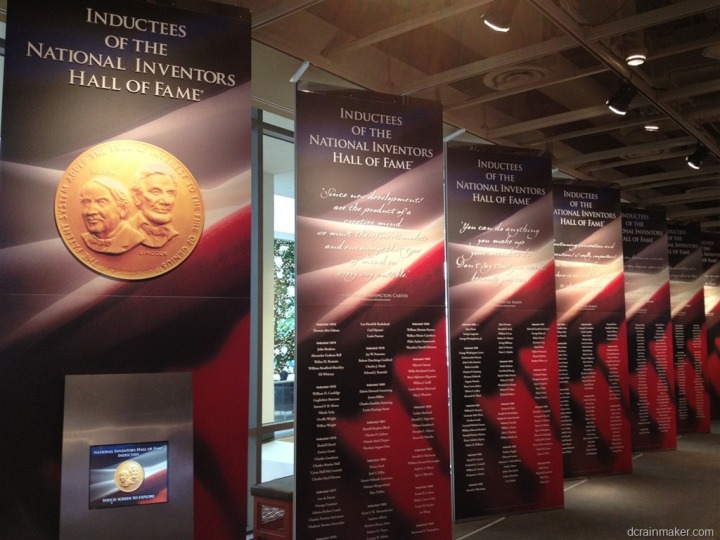 Once I beyond my Snuggie inventor search, I found that everything in the museum was focused on health and fitness, primarily sports equipment.  Effectively – sports technology of yesterday. 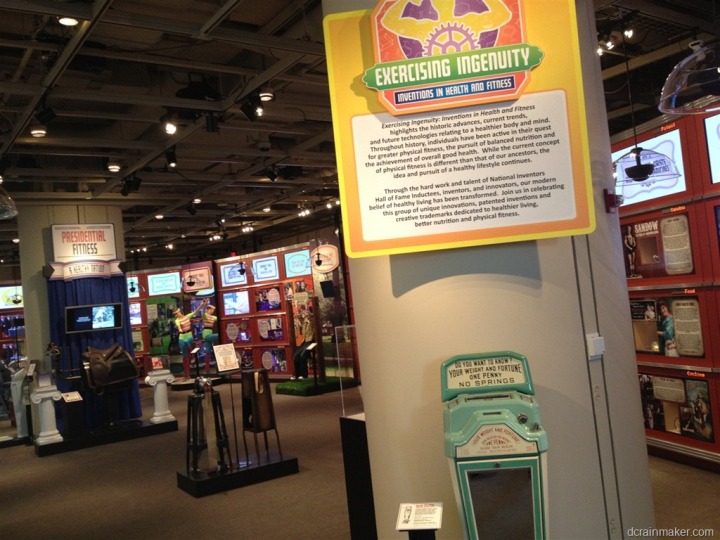 The place was packed full of crazy things I’ve never seen before.  Take for example, this exercise belt massager.  While later devices had a different theory behind them (shaking your fat loose), this unit from between the late 1800’s to early 1900’s was more simple in nature: Make you feel good. 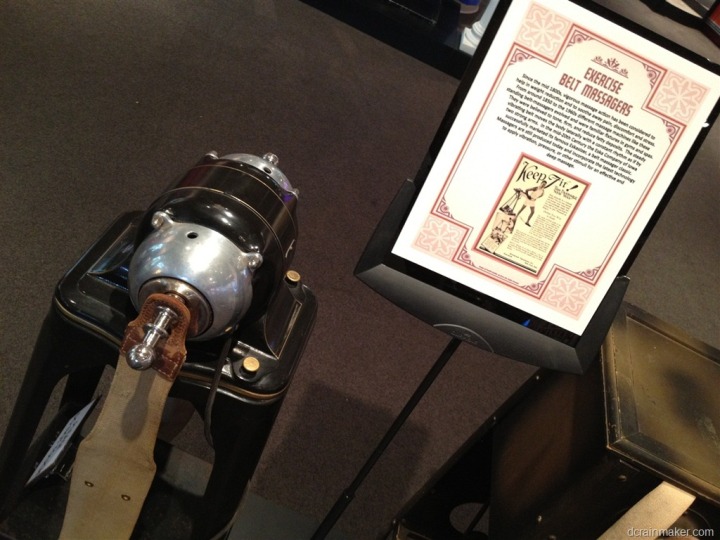 Included within all of the equipment was relevant books and/or fitness programs.  Take for example, the 1963 US Physical Fitness Program, which would become one of many Presidentially backed US fitness programs over the years. 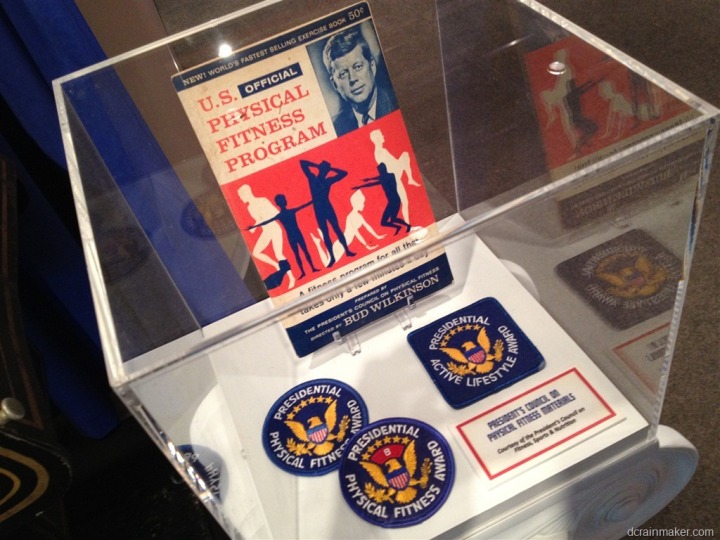 For those curious here’s an even longer list of all Presidential initiatives.  And, you can actually buy in paperback the bound report pictured below on Amazon (not exactly a hot seller though).  As a side note, finding the digital copy turned out a bit more difficult than I expected – would love to know if anyone can find a link to a downloadable version. [Update: Thanks to Steve for finding a digital version available that’s OK to reproduce, I’ve uploaded a copy here.] 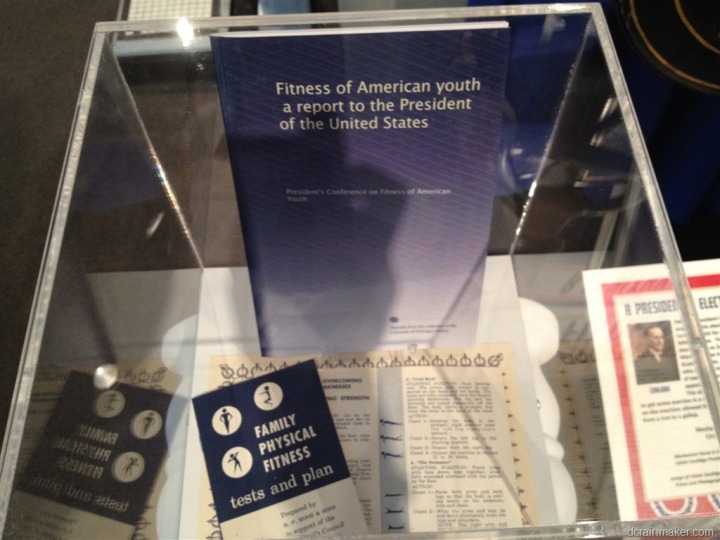 Back on the equipment front – we’ve got the very first Nautilus One Ab Machine, which entered the market in 1983.  Its primary distinguishing feature was simply the dial to control resistance. 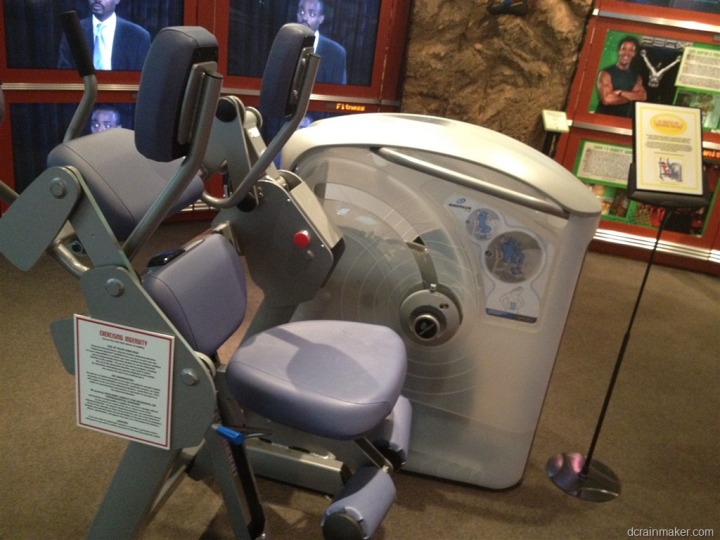 For those looking for something a bit simpler than a dial, I give you the first US patented 25-pound medicine ball.  Note however, that the medicine ball was used in many forms for literally thousands of years prior. 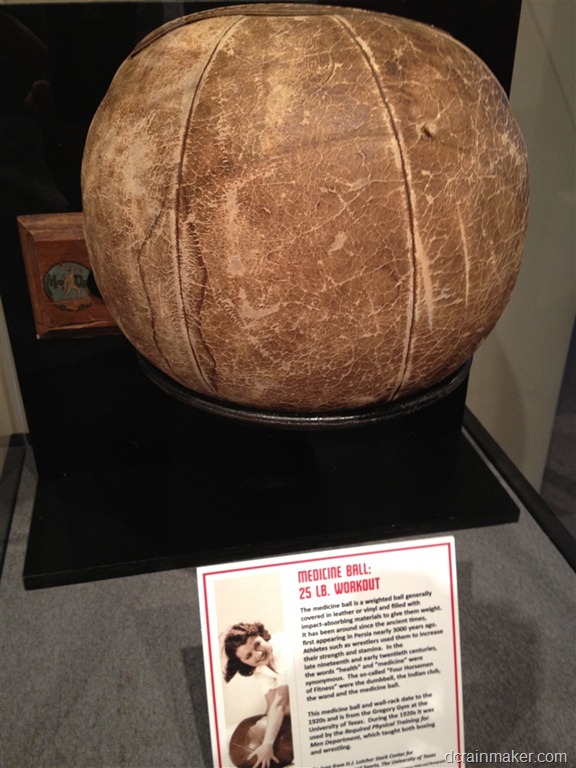 There’s no doubt that a caveman could use the above medicine ball.  However, despite a lot of concentrating on the below machine and its instructions, I’m still honestly not too sure were to start.  In fact, I’m reasonably certain I would have managed to catapult myself out across that gap in the foyer and into the Steve Jobs exhibit in the background.  Likely resulting in some sort of national security incident. 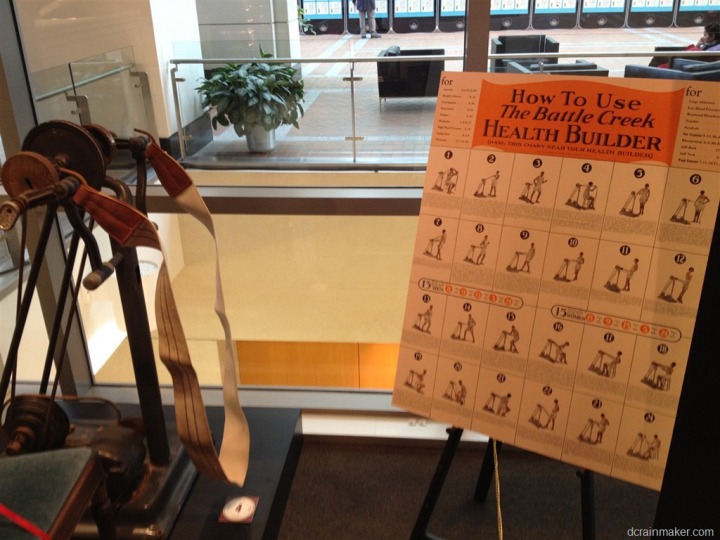 As noted before, in addition to machines, we’ve also got programs – modern ones too!  In fact, there was both P90X and the Insanity workout listed.  It’s unclear if those were special edition collectors sets being featured though. 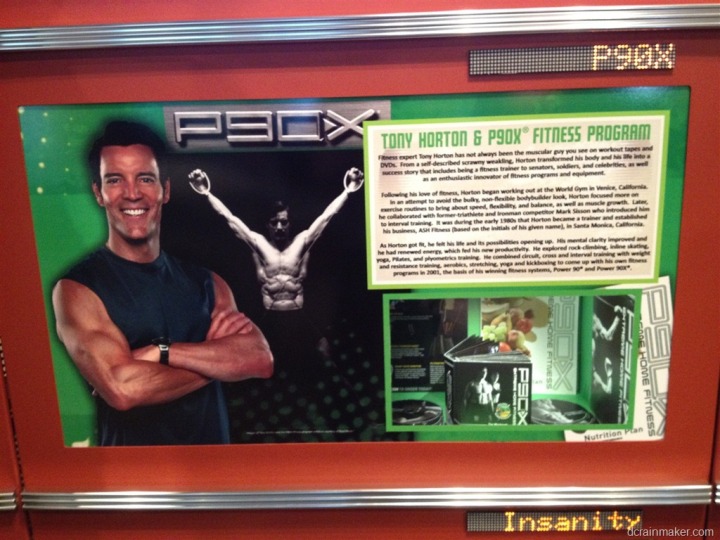 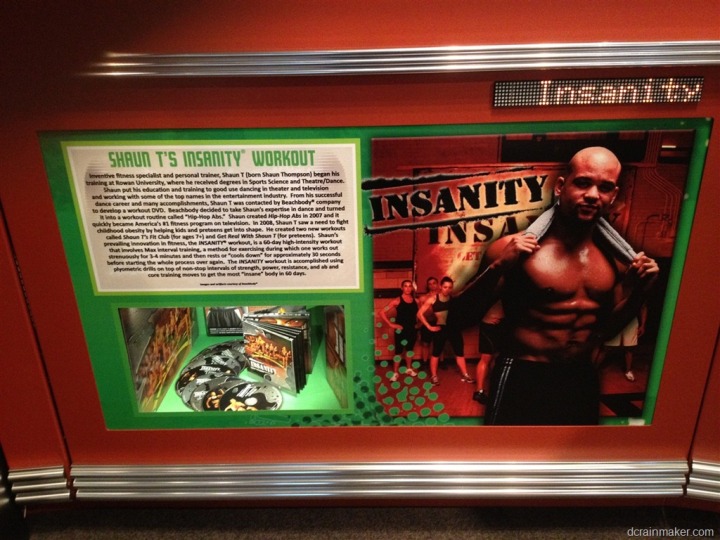 Of course, no sports museum would be complete without a tribute to Gatorade.  This featured a bunch of original cans and bottles from way back when, as well as the complete story of Gatorade. 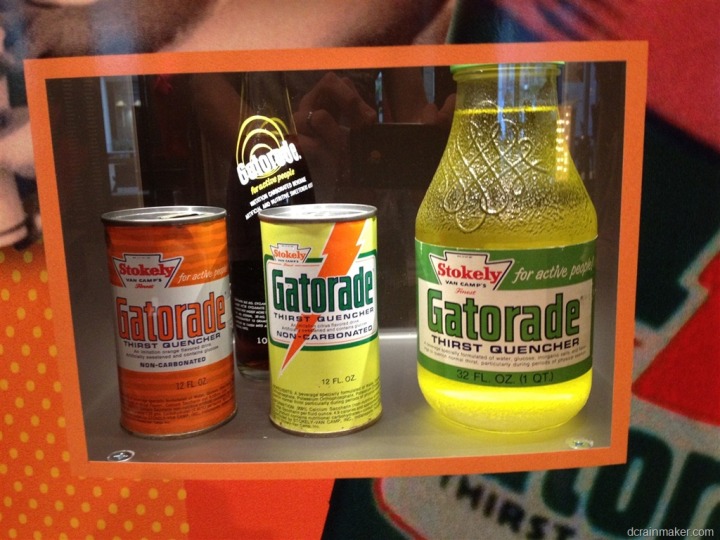 As many of you know, it was originally formulated at the University of Florida in 1965 to assist football players with hydration issues.  And while there may be more refined ways of delivering electrolytes these days, it does continue to be a staple in virtually every running race out there…nearly 50 years later. 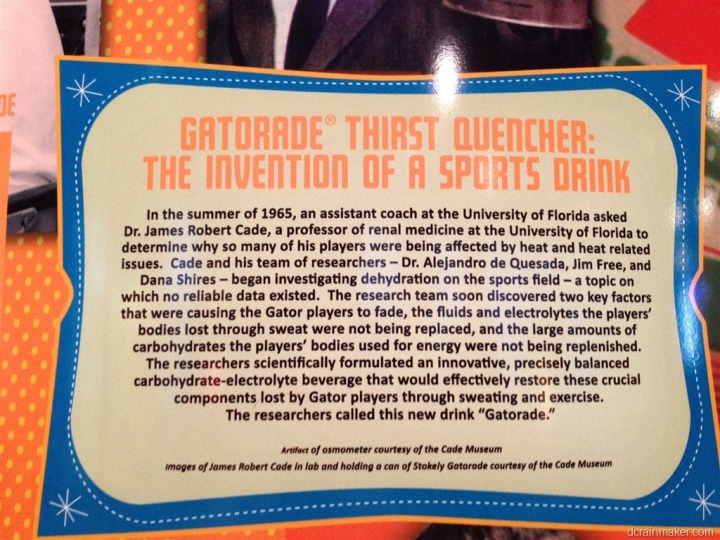 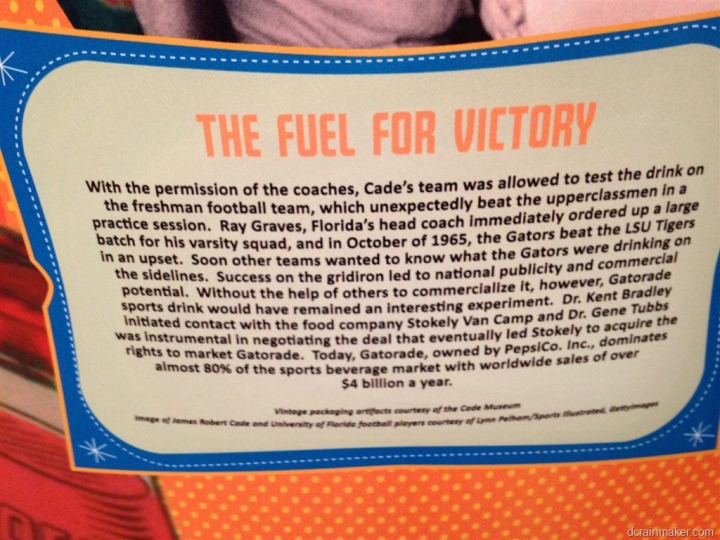 One item that hasn’t quite yet made it to the kitchen of every home yet is a juicer.  Now, I do actually have a juicer – in fact, one that looks very much like the below.  Perhaps almost as shiny and new looking, showing exactly how much I’ve used it over the years.  And while my goal was to end up looking like the guy in that magazine, the inability for me to clean the darn thing hindered its use the most.  Oh well, I still love you Mr. Juicer. 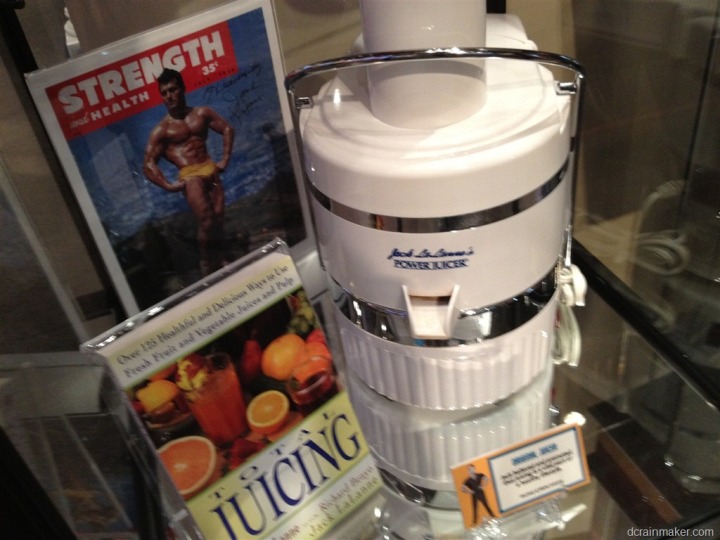 There are though many tributes to more commonly available forms of exercise – such as the bicycle.  This miniature version shows one of the very first bikes.  In fact, if you want to learn more than you ever wanted to know about the below bike, check out the first chapter of NYC Bike Snob’s book.  Crazy interesting detail about it (and lots of other cycling related goodness and never ending sarcasm).

(For the record, I believe that’s my first ever book recommendation…I feel one step closer to Oprah’s book club now.) 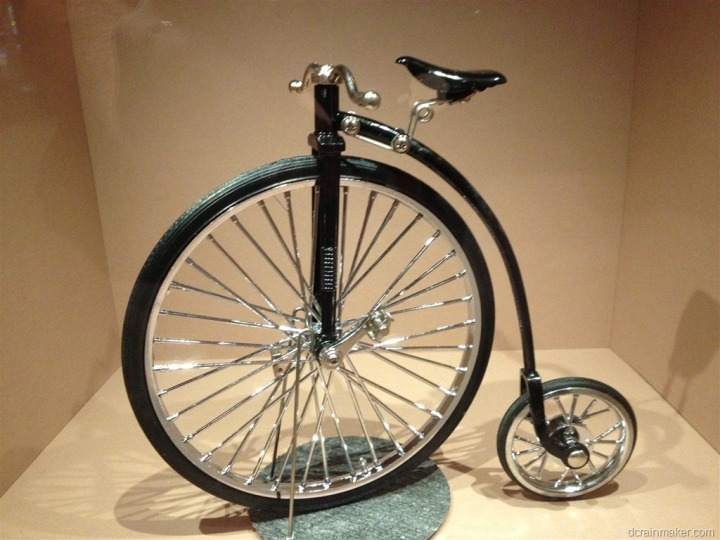 Finally, I leave you with one more invention to ponder.  Any guesses on what this was used for? 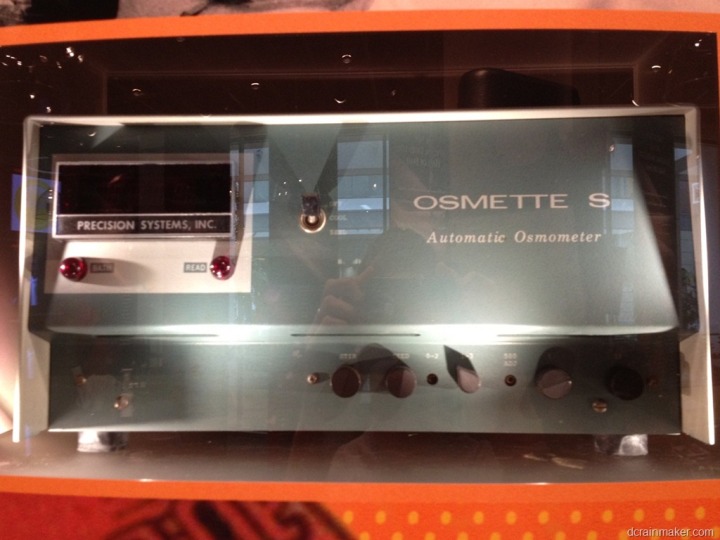 Now I did promise though to show you the Steve Jobs Patent and Trademark Exhibit.  Since I happened to be there again for the George Washington 10K I got a few better pictures then of his exhibit (though, the museum was closed that day).  Ironically everything else in this post was taken with an iPhone. 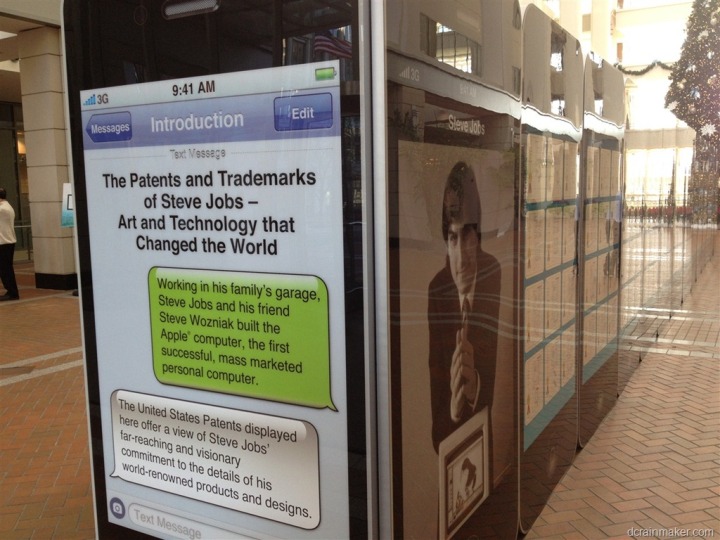 The exhibit is pretty significant in size.  There are about 30 gigantic human sized iPhones that each display 12 patents that specifically attribute Steve jobs on them – from his very first patent, to one awarded just prior to his death. 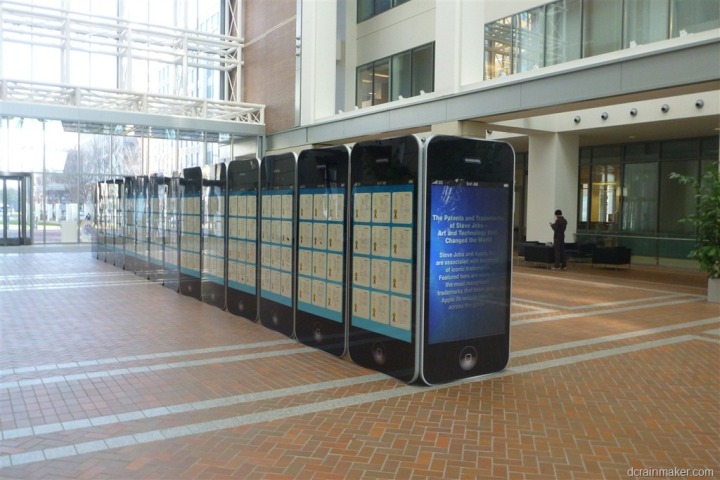 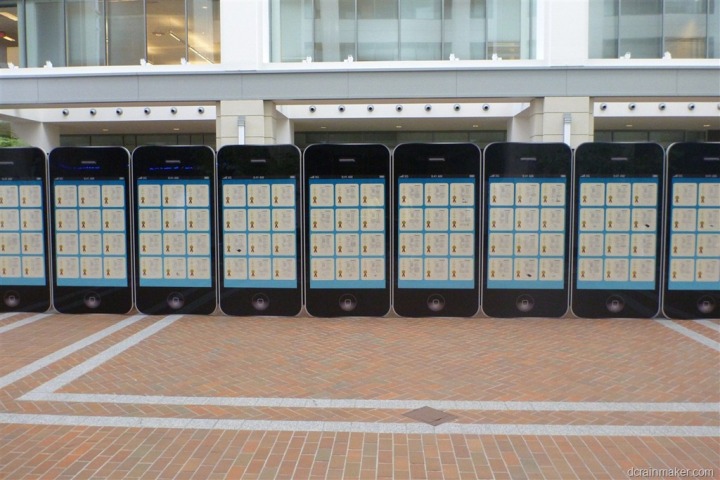 Each patent lists a slew of information, though the parts readable in normal human English primarily focus on the ‘goal’ of the invention, as well as who contributed to it. 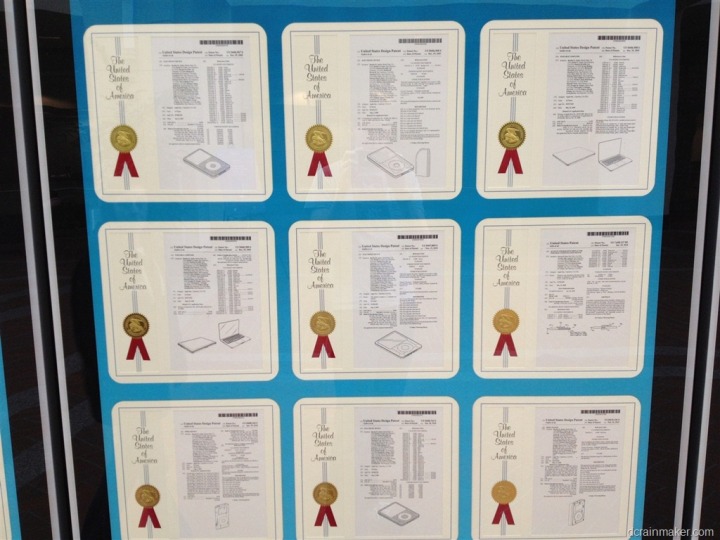 It’s certainly interesting to see all of the tiny little things that are patentable, and to see the sheer quantity of things attributed to him over the decades.  More so, it’s interesting to look back on items that we now consider everyday concepts in software or technology, and to think that at some point in the past it was new and exciting. 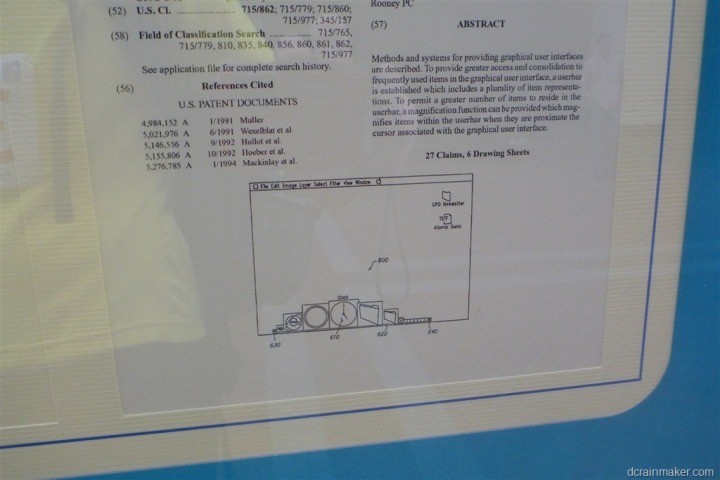 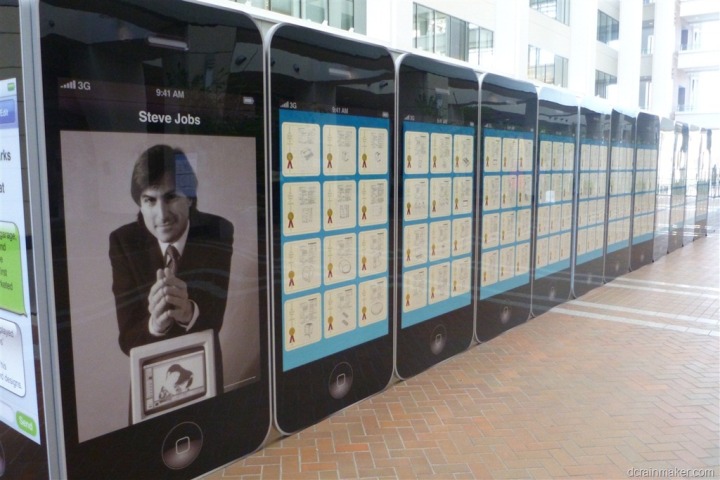 With that, I’ll wrap up and let you enjoy the rest of your day.  As always, thanks for reading, and hopefully you found this momentary diversion a bit interesting.