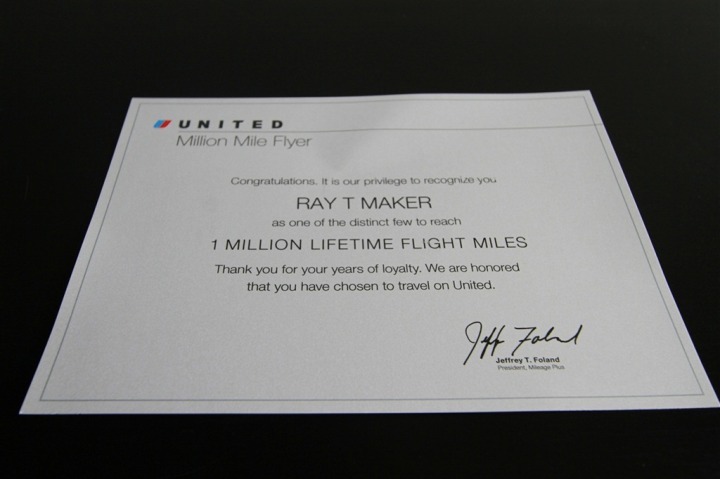 Back in June I hit a minor milestone in the alternate reality that I live in with respect to travel – which I do primarily for work.  As of June 16th, I crossed over the threshold of flying 1,000,000 miles on United Airlines.

Now, it’s probably important to take a minor diversion and explain how Million Miler programs work – as different airlines treat and count miles differently. For United it’s actually really simple, and rather very pure.  They ONLY count what are known as Butt in Seat (BIS) miles, and ONLY on aircraft that have a United logo on the airplane (aka United metal).  Meaning, that if I flew from Seattle to DC, I’d get 2,306 miles credited to my lifetime miles, regardless of which class I flew in or any bonuses.  This is different from some airlines (for example, American Airlines until December anyway) that count all miles you earn – regardless of source – i.e. credit cards, bonus, promotional, etc… That’s an entirely different ball game.  Other airlines have programs that offer some variation of the two schemes.

In my mind, the United program is the most pure – as money doesn’t play a factor but rather simple butt in seat time does.  Of course, while I hit the threshold of 1,000,000 miles – I’ve actually flown far more than that on United.  Award flights (like when I go on vacation) don’t count, so in reality it’s probably closer to 1.2-1.3M.  Not that I’m counting.

Now there are many people (including the dude who hit 10 Million Miles recently on United) who fly far more than I.  I average between 100,000 and 250,000 miles a year (flying) – and have since 2001.  Of course, not all of that is on United.  Some folks easily average 250-500K a year without blinking.  It all depends on the routes they fly.  Thankfully, I’m not one of those people.

What was cool was that my wife was on the flight with me (though at the time, fiancée).  This certainly wasn’t planned, it just aligned that way in the final week.  We were flying back from the CycleOps product launch in Denver, and at the time I was less than a 1,000 miles from 1,000,000 miles.  Here’s what my account looked like prior to the flight. 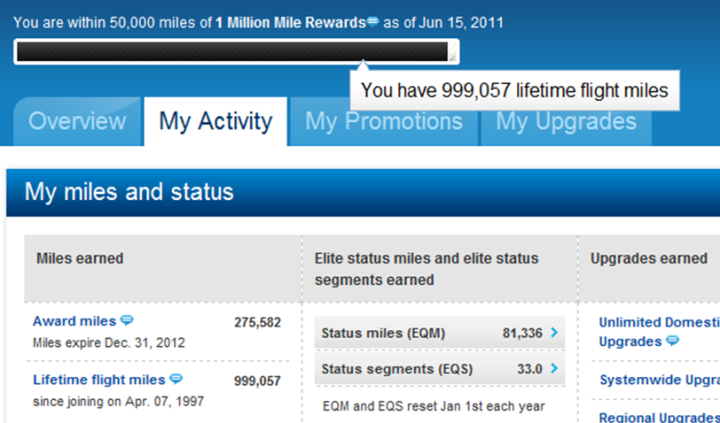 Now what’s funny is that some folks really think through their ‘Million Mile flight’.  They do it in style – like in business or first class on a transatlantic or transpacific flight.  They have the whole thing thought out.  I however, was not one of those people.

Nope, I did it in Seat 32E of the painfully short Denver to Dulles Redeye flight (only 3 hours long).  Note that Row 32 is the second to last row on this little Airbus 319. 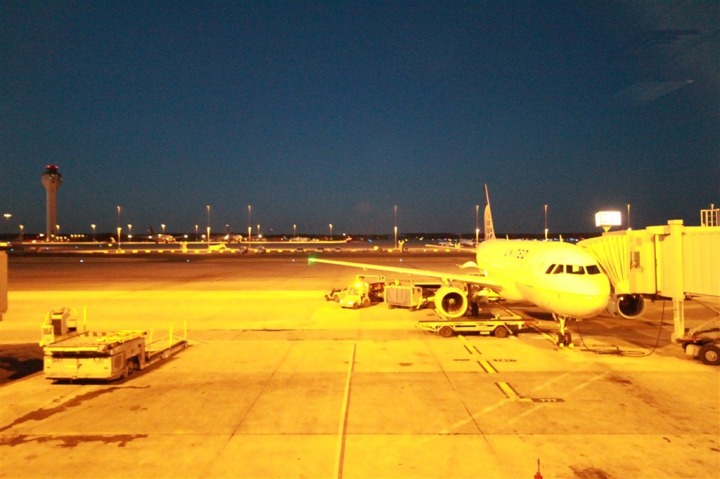 But The Girl had fun with it.  She got me a little toy United plane and wrote my name on the side.  Back in the day, folks got planes named after them at various multi-million mile landmarks.  Not so much anymore, as it’s too common. 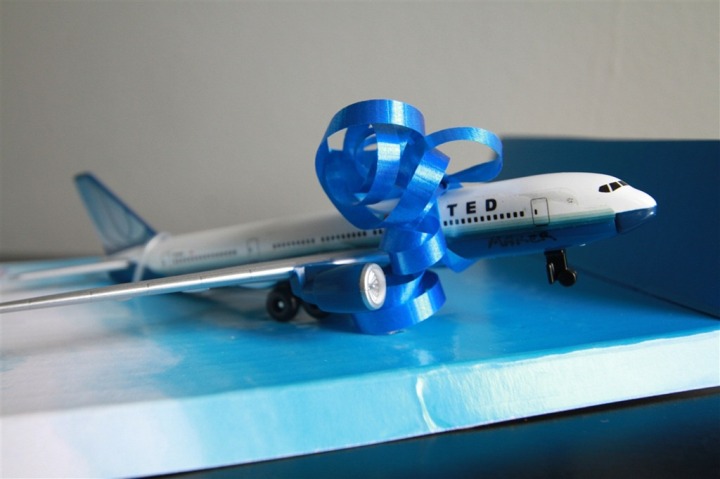 And the Captain was great in that he printed out the flight plan for the flight and even wrote a little note on his business card. 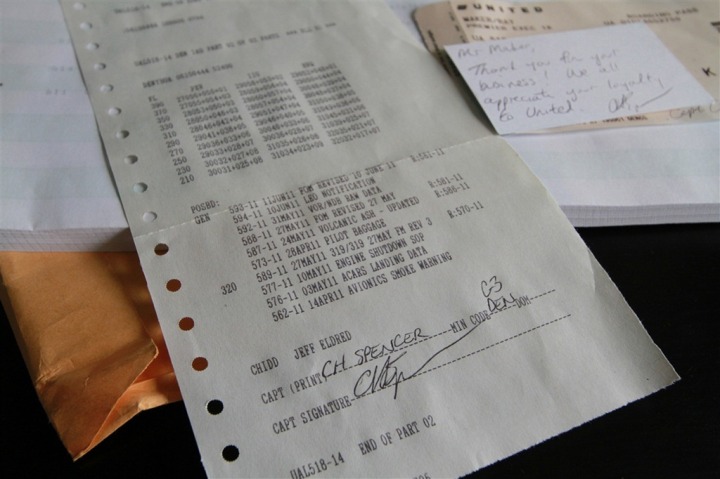 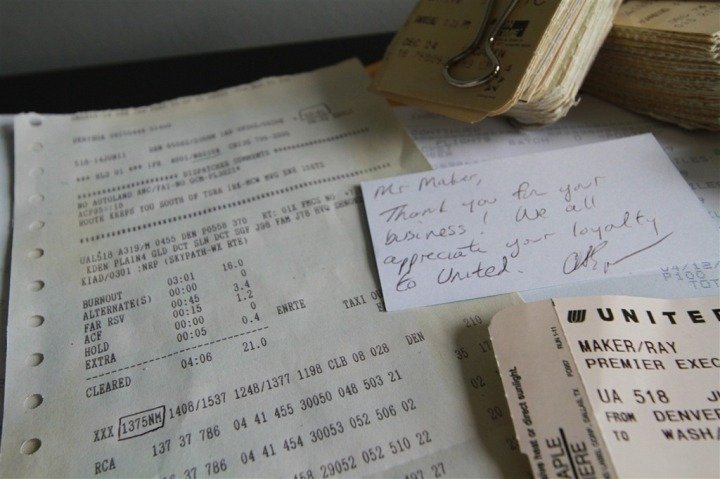 A few weeks later I received a congratulations e-mail – plus the printed certificate at the top of the this post.  My account then showed (rather anticlimactically) that I had crossed over the million miler marker.

What’s a bit more fun though is that I requested a paper printout of my entire United Mileage Plus activity since the beginning of time.  A week later it showed up in my mailbox.  Note that it took almost $8 in postage for the first envelope which contained the entire printed history of my account, and then included a second smaller envelope as well. 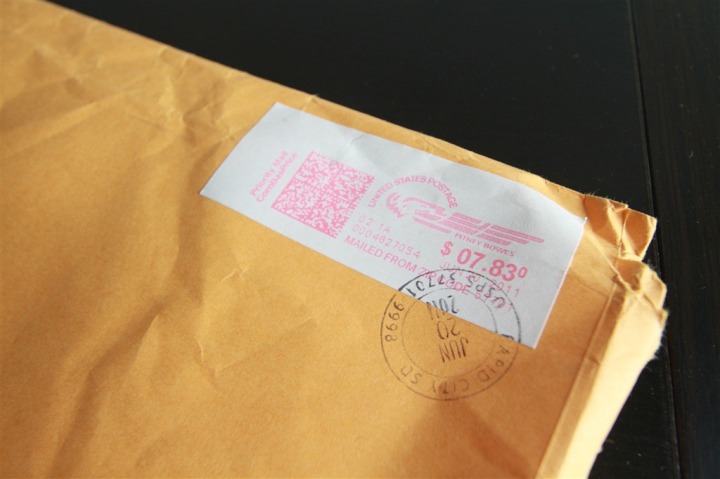 Now, I actually keep most boarding passes – just for fun.  Years ago I used to actually put them in binders, but now they’re just in a giant cardboard box.  Here were the prettier days: 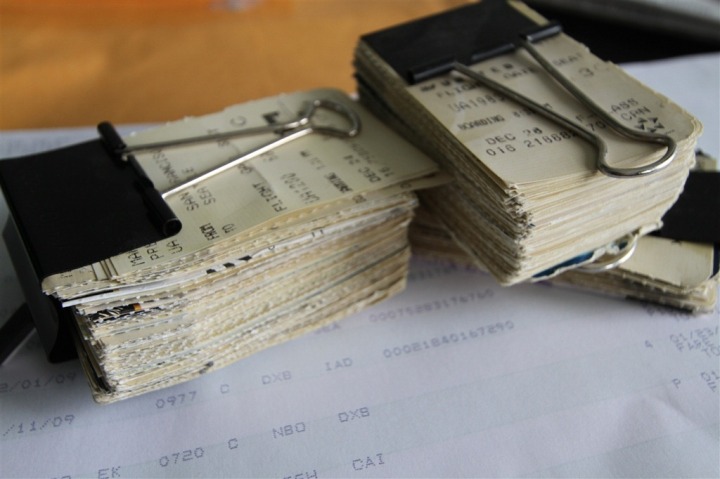 But back to the paper envelope.  Inside was a gigantic old-school printer style printout of every single transaction ever.  Every flight, every car rental tied to United, every 1-800Flowers purchase…everything. 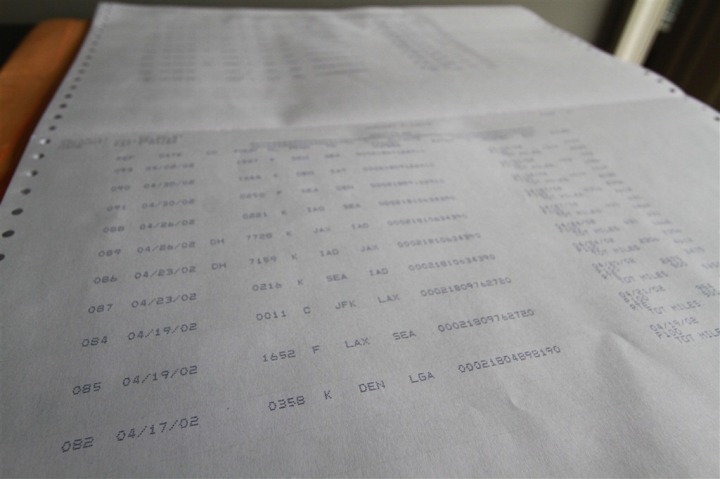 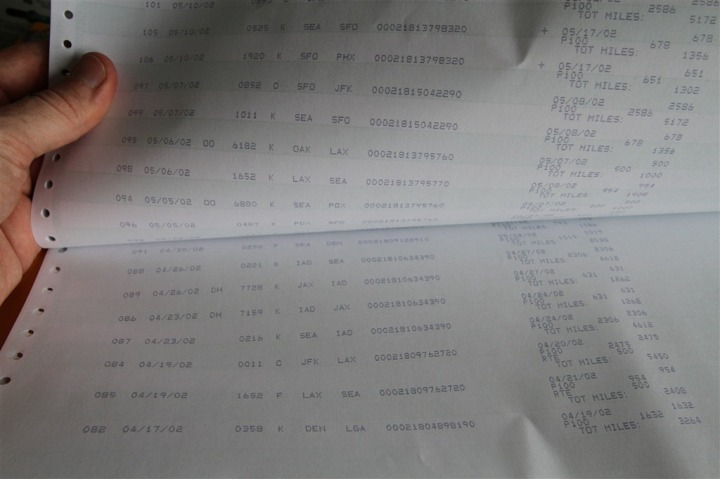 The ream of paper is about an inch high. 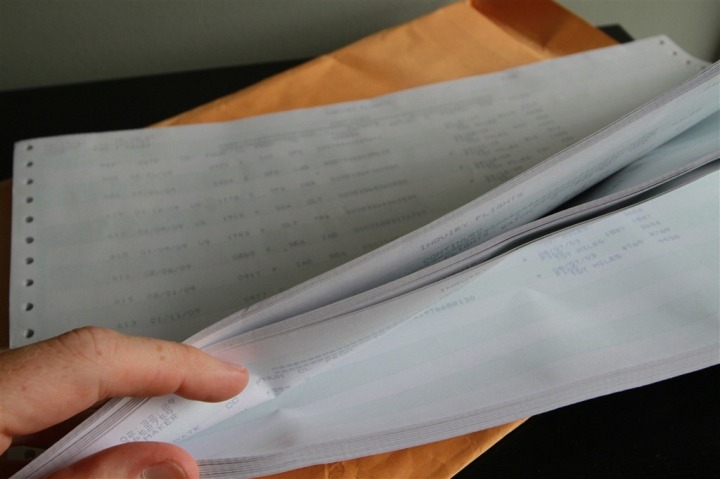 So what does this get me at the end of the day?  Well, not much honestly.  A tiny itsty-bitsy bit higher on upgrade lists and a few extra upgrades per year.

But it’s the experiences along the way are far more notable.  While the airline industry always gets a bit of a bad rap in customer service, I find that by and large the United folks are great.  It’s funny in that it’s been 7 years since I lived in Seattle – yet just this past July during a trip there, it was neat to see that the ticket counter and gate agents both recognized me (from years of being on their counters every Monday morning and saying ‘Hi’ every Friday on the way back in).  They were excited to catch up and hear how things were going.  Of course, it’s also well known by frequent United fliers that Seattle has the best United staff (SEA based pilots & flight attendants, airport agents) folks out there. 🙂

Hope everyone has a great weekend ahead!  Thanks for reading!