A look at the 2012 Washington DC Multisport Expo

In between various things going on Saturday, I managed to sneak a bit of time at the DC Multisport Expo, which is held within the Georgetown Prep sports facilities.  I try and make it out there each year for the event, as it’s cool to catch up with folks from around the area.  Once you’re on the grounds you may find yourself distracted by just how nice the facilities there are.  I’m reasonably certain you could turn this place into an Olympic training center without too much additional work.  Everything from an indoor track, multiple indoor sport-specific rooms, competition pool, the works. 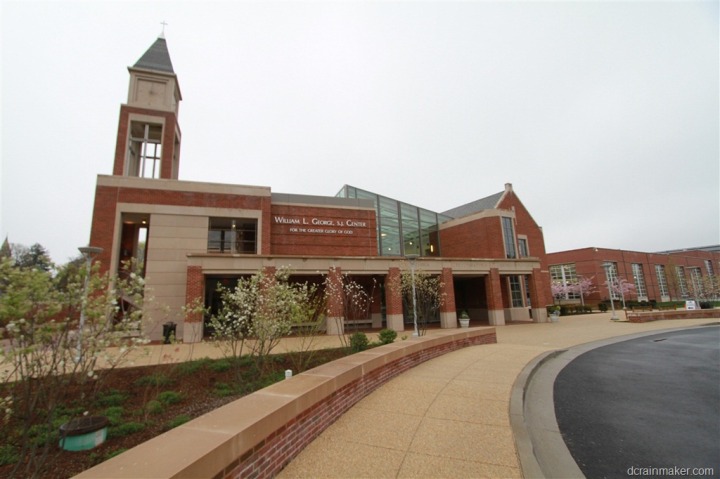 Speaking of the pool – over the course of the day there were both competitions held in conjunction with the event, as well as training/instruction sessions. 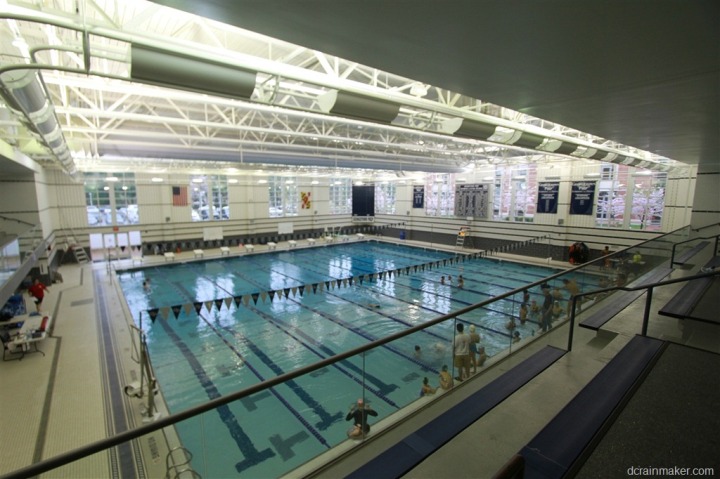 And, you could even try out wetsuits too (see that rack in the back there against the wall): 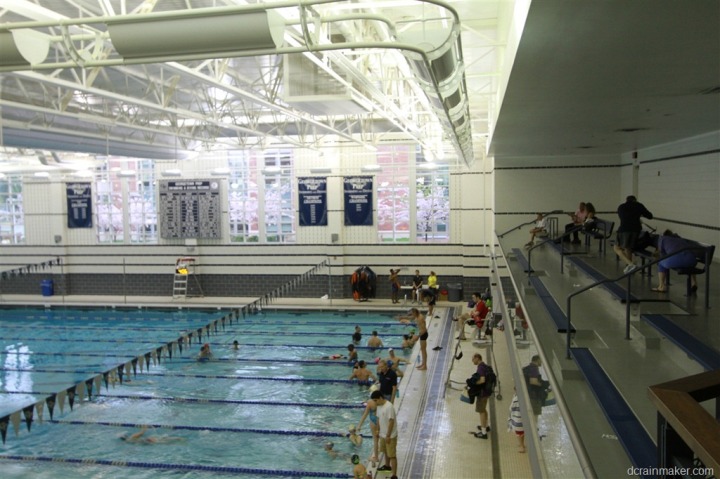 Just next door to the pool was a gym that was converted into an auditorium.  Folks could drop in on the non-stop presentations that were being given on a variety of topics from endurance nutrition to sex and triathletes.  There were some pretty big names in here too – from Jarrod Shoemaker (2008 Olympian to World Champion Dave Scott (yup, THE Dave Scott). 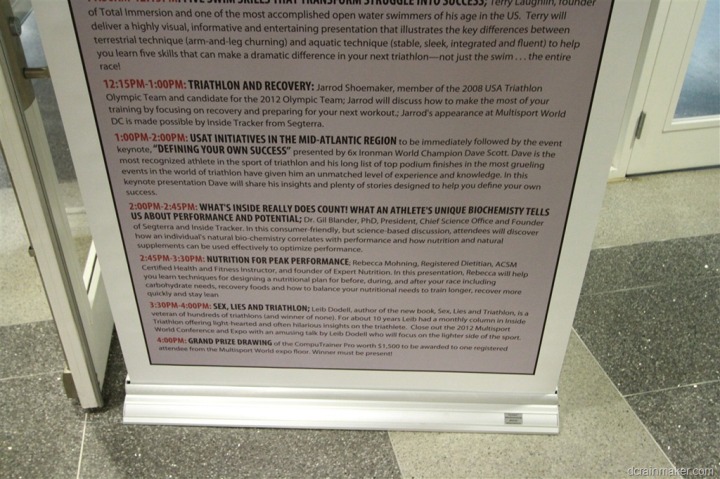 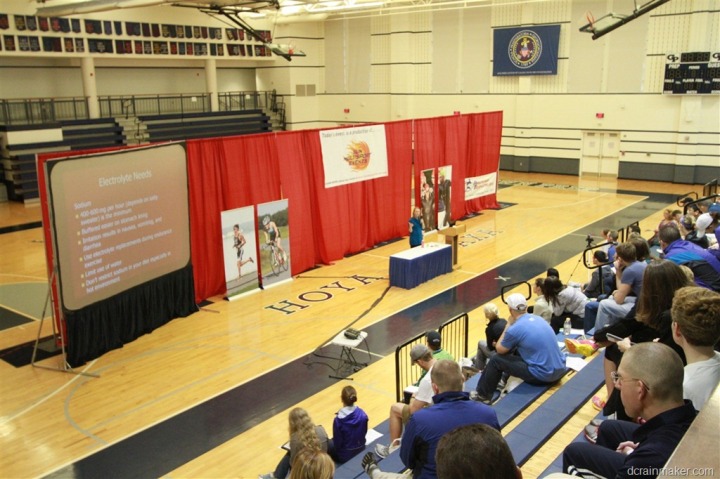 What, you thought I was kidding about the Sex, Lies and Triathlon thing? 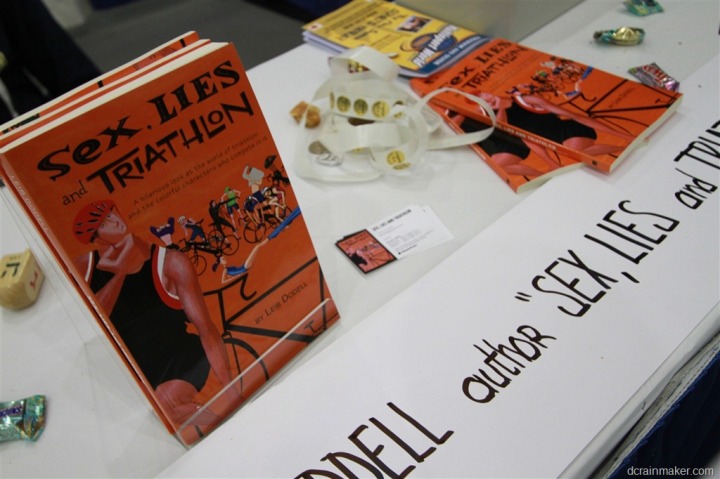 From there I headed on down to the main gym.  The main gym included the 200m indoor track, where the full infield was blanketed the expo itself.  Kinda unique, and pretty cool. 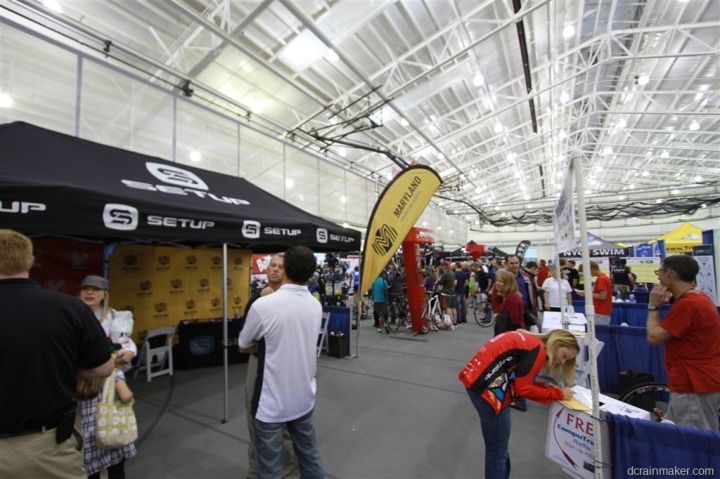 The expo is a mix of vendors, from local retailers triathlon and endurance retailers, to regional races, to triathlon teams/groups, to nutrition vendors, and then lots of product specific retailers.  Some of the product specific booths would have attended all three expo’s (Boston, NYC, WashDC), but the majority of the other booth categories were specific to the Washington DC area. 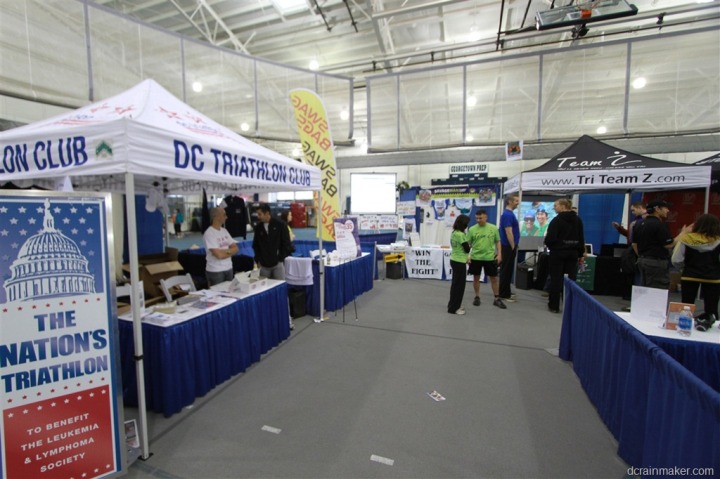 Or, if you’re looking for Youth Triathlon clubs and camps, the Mini Cow Tri Club.  They’re doing some really cool stuff focused on getting kids interested in triathlon. 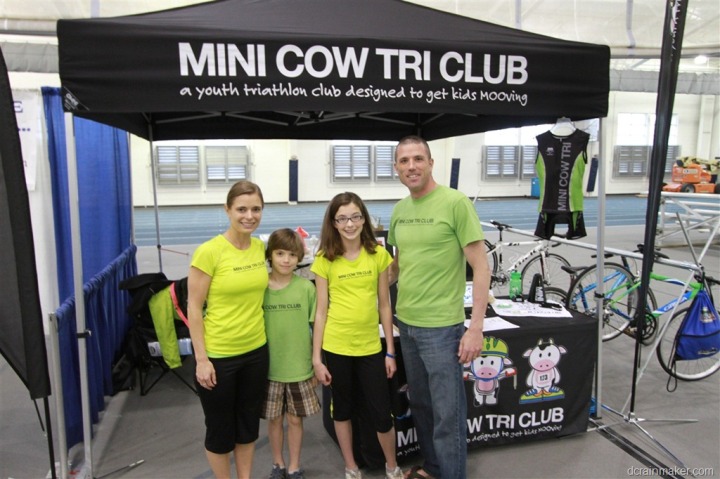 As you turned the corner you found one of the biggest triathlon-specific retailers in the area – Bonzai.  Like previous years, Bonzai held CompuTrainer racers within the grounds of their massive booth estate.  It was a team competition, with various triathlon clubs and groups going at it: 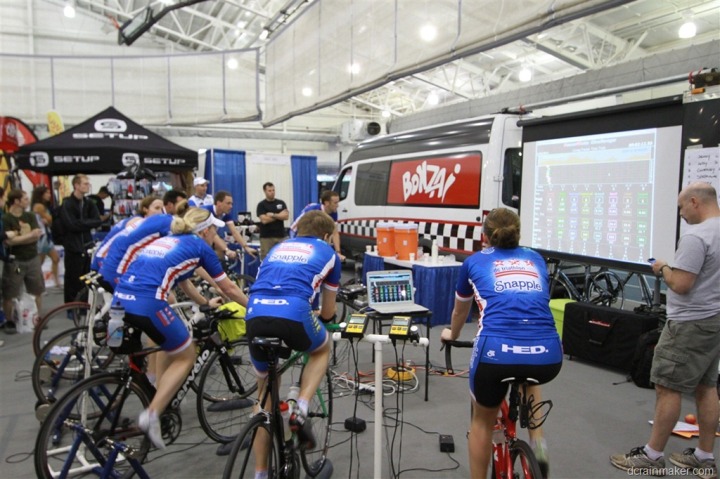 I noted to the organizer that a full-fledged individual indoor triathlon would be a huge draw to the event.  This time of year is perfect, and with integration with the major collegiate and non-profit triathlon clubs (DC Triathlon Club, Team Z, etc…) – you could get some rather high turnout.  Since I was scheduled to do a indoor triathlon 90 minutes later (elsewhere in the city) – my mind was definitely on the topic.  In most cases, finding a pool is the toughest part – which they easily have here. The massive gym and outdoor space gives the opportunity for either a dozen treadmills, or even an outside 5K run course.  The constant ebb and flow of race starting waves and supporters going on throughout the day would also increase draw to the larger expo.  And while there is a team combo event this year, the majority of triathletes in the area aren’t on teams – and would love an individual option.  Something to consider for next year…

Speaking of CompuTrainer, they had their own booth – where I spotted the RacerMate One suite was being shown off.  At present, they have settled their legal issues with the software, and are aiming to have it available in early summer. 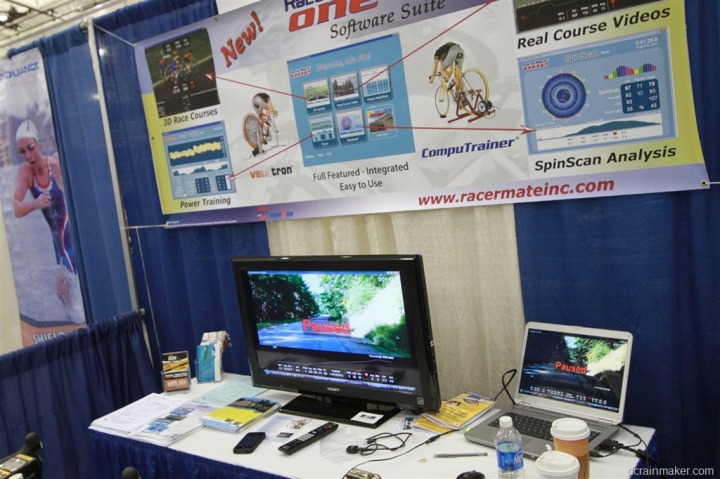 Looking at other non-DC specific groups, the InsideTracker folks were present.  They’re based out of Boston, so it makes sense that they’d show up here given the larger expo series.  You probably remember the write-up I did on them back in December.  Oddly enough, I actually just got an e-mail from them this afternoon (Sunday) that they’ve now added testosterone testing to their options. 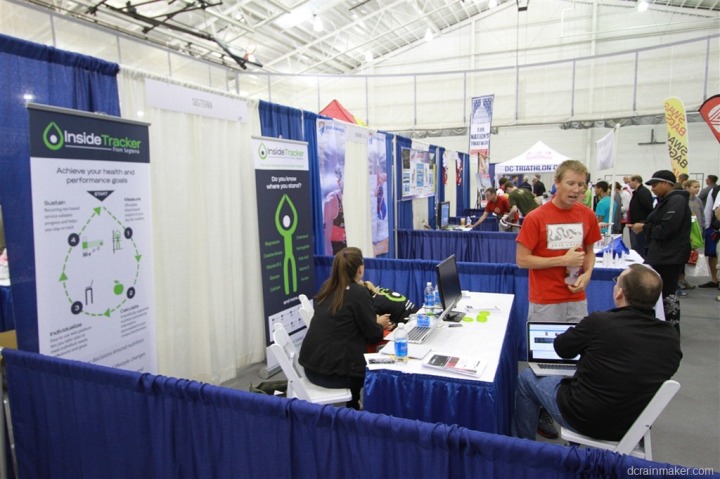 As is often the case with these shows – many of the retailers feature some fairly good discounts.  For example, these wetsuits were 25% off – not bad at all! 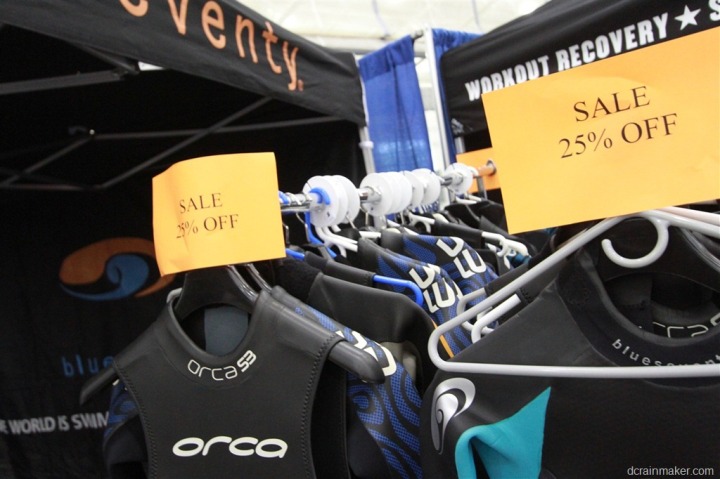 Finally, I rounded the corner to swing by a few more local retailers on my way out.  One of these lucky local shops is gonna get my bike order for my $800 bike.  The bike has been selected – now I just gotta find someone who can actually get it ordered (nobody nearby has it in stock). 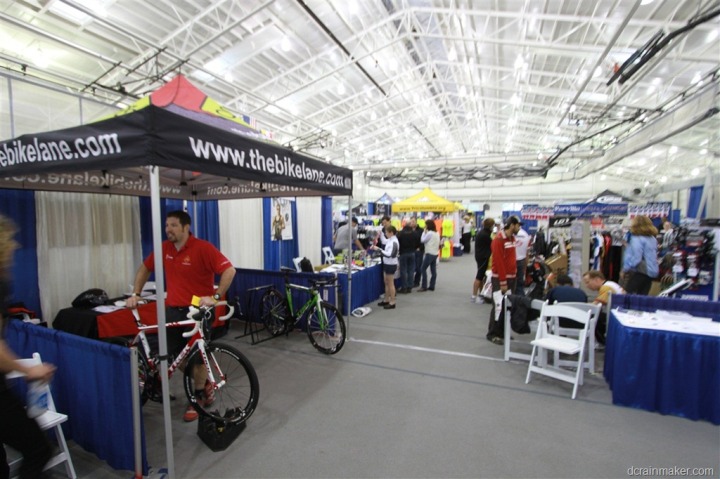 It was awesome catching up with everyone that said ‘Hello!’.  I don’t think I made it more than one booth-length before I ran into someone else that I either knew, or knew me.  It’s cool that the local DC triathlon scene is that friendly!

I was also excited to hear from the organizer that they grew about 25% this year over last year from a registrants standpoint – which is great.  Hopefully next year with an indoor triathlon *nudge…nudge* – that will grow even more.

Hope everyone enjoyed the show – and thanks for reading!  And, if you’re in Boston – the whole expo moves up there for this upcoming weekend (March 31st).  From what I hear, Boston is actually the biggest of the three cities.

And finally, soon you’ll hear about that indoor triathlon that I myself did later in the day at a different event…fun times!