A look at the 2011 Multisport Expo in Washington DC

Nestled in between all the craziness that was this weekend (racing a half-marathon, then baking 17 dozen cupcakes for a competition, and finally supporting The Girl in her triathlon cake domination), I had a chance to sneak out to the grounds of Georgetown Prep to see how things were going at the Multisport Expo.

This is the same expo that recently visited both Boston and NYC over the past few weeks.  Though in each case the expo is largely tailored to be city specific in that the vast majority of exhibitors at it were from within a few hundred mile radius.  Always good to support the local folks!

So into the building I went!

Inside you’ve got a lot of different areas you can wander to – but the biggest one is the expo itself.  This is situated in a building that also doubles as an indoor track facility.  On the inside of the track (on what would be grass if it were outside) are all the different vendors and things to check out.  Probably the biggest attraction was the combined Bonzai Tri shop and Cervelo area: 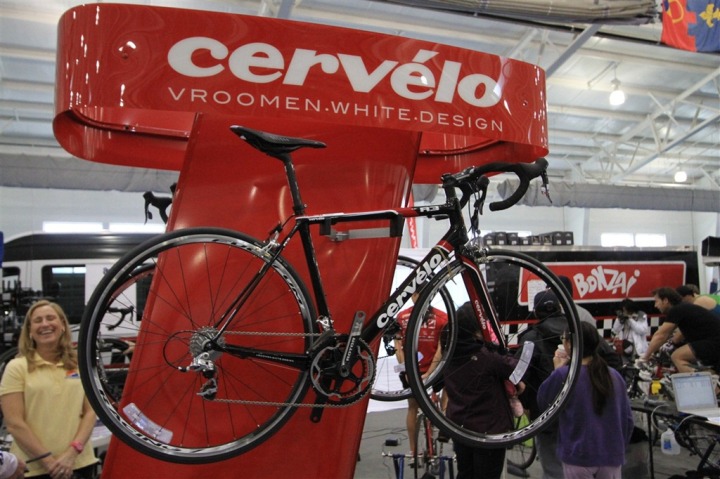 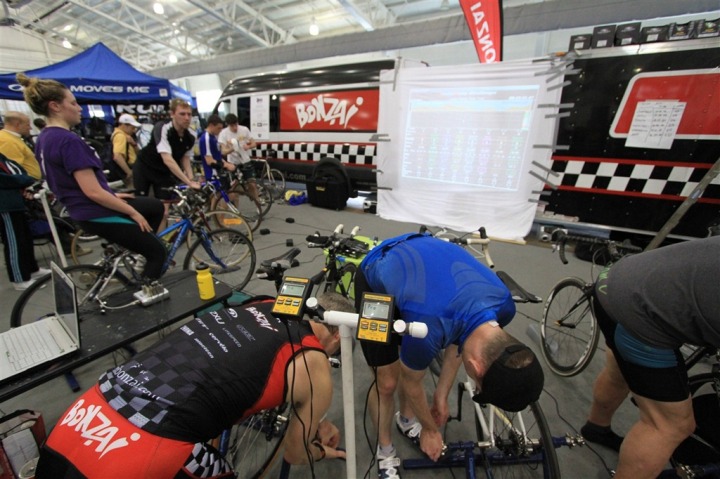 As part of the Bonzai setup they had linked together a number of CompuTrainers and were doing 10K time trials.  You could setup your own bike, or use one of the few provided.  The groups were going off in waves, aiming for the fastest time and/or highest wattage – which was then posted on the trailer.  Live computer displayed progress was being projected onto a screen in front of all the riders. 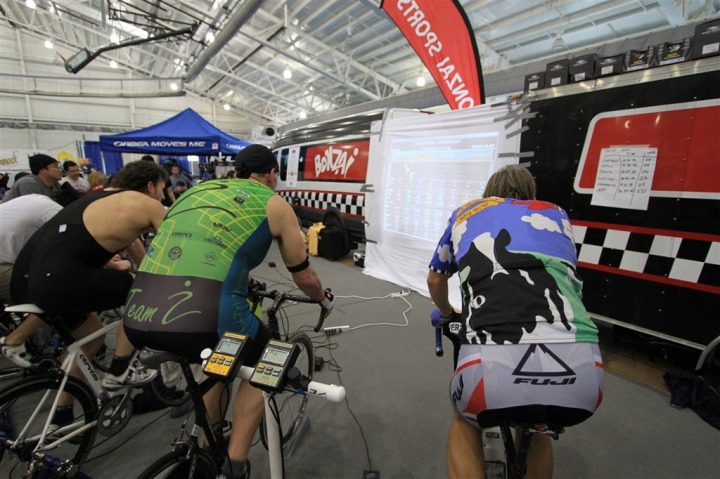 Next to Bonzai were the folks from BlueSeventy.  They had a bunch of wetsuits and goggles you could check out, and even gave The Girl and I a pair of goggles to try out (though she didn’t join me in my expo excursion). 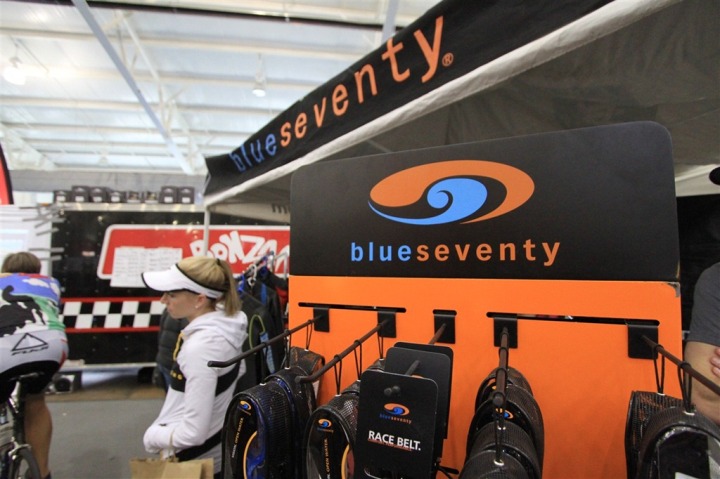 Across the show-floor you found many different types of booths.  For example – there was the race focused ones, promoting various races in the area, like these ones from TriColumbia and Setup Events: 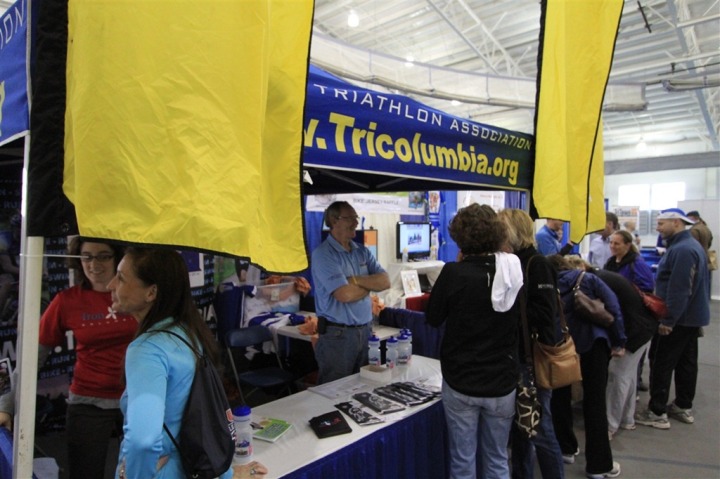 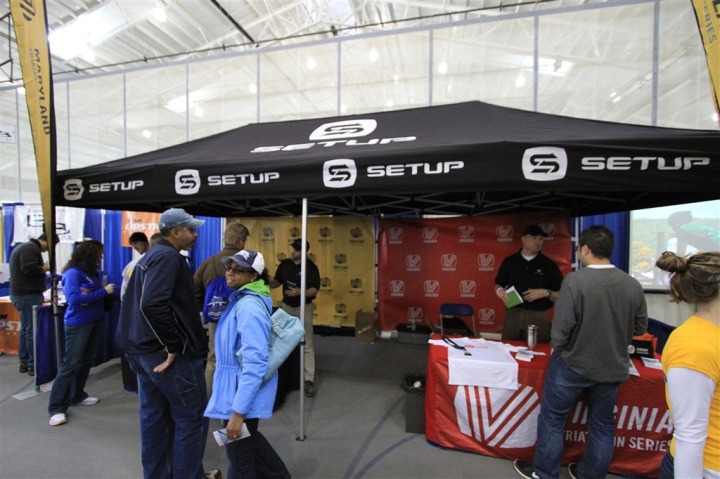 Then there were ones promoting clubs – such as this one from DCTriClub (which also happens to be one of the largest clubs in the nation). 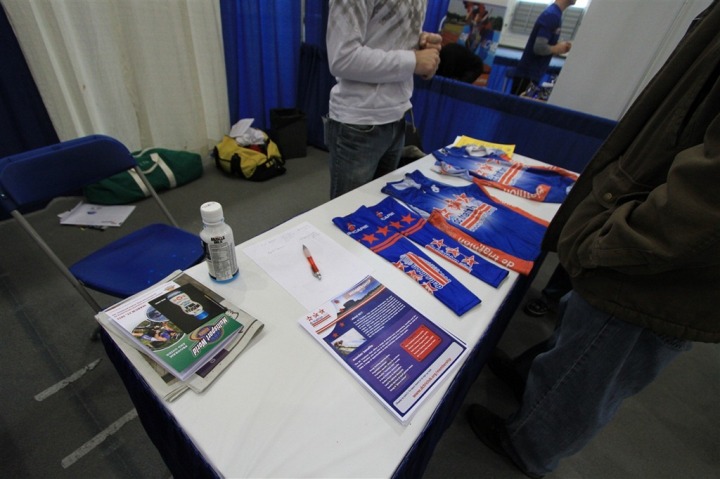 Next to clubs, we had sites – like BeginnerTriathlete.com – a great resource for both new and experience triathletes, tons of information in the forums there. 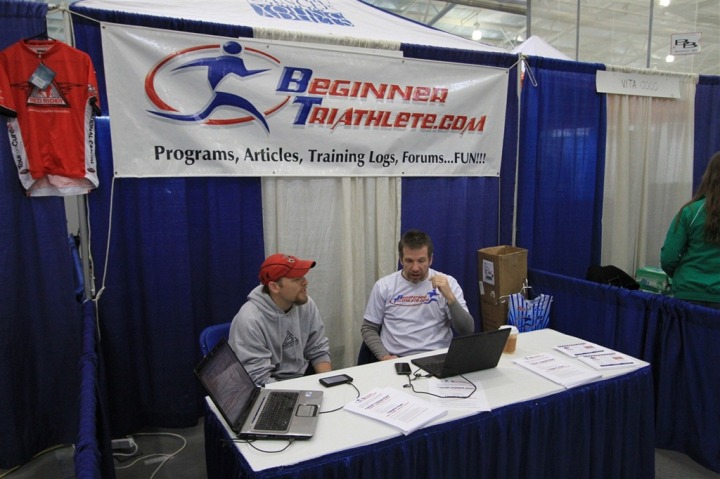 There was also vendors selling products and services.  For example, Tri The World Travel had information about all the trips they have, and sharing the same booth was The Bike Coat – which is a simple and clear bag that meets USAT transition rules and allows you to cover your bike for those overnight stays in transition: 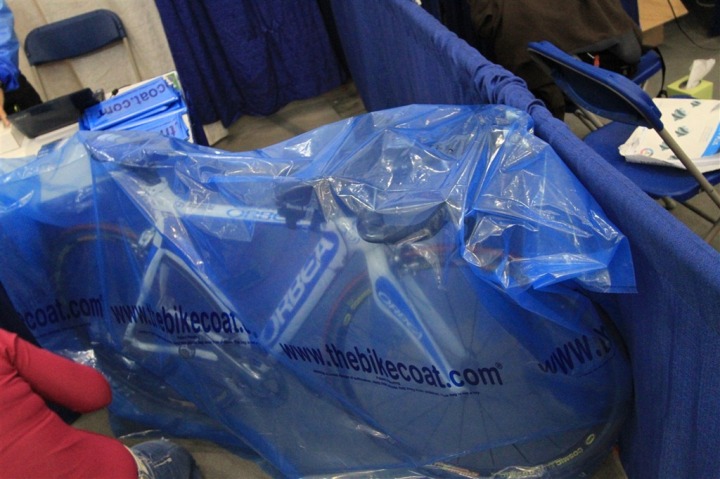 And then we had the one booth you were certain not to miss – Ruseen Reflective Apparel – which had…well..reflective apparel.  Lots of it: 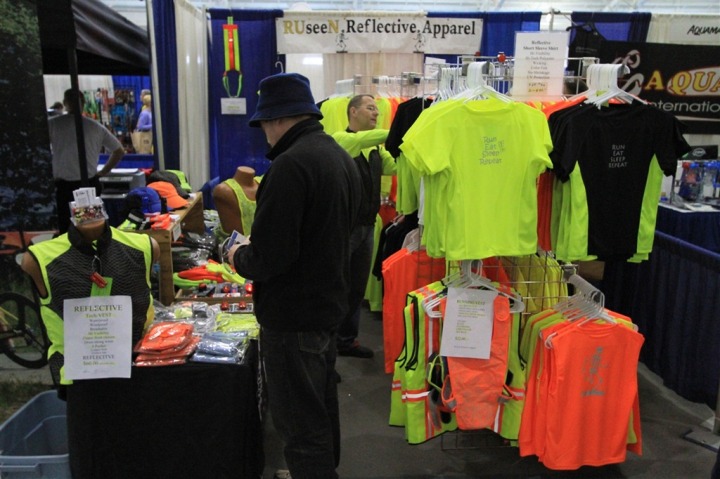 In addition to all of these types of booths, there were ones doing live testing.  For example, if you wanted a VO2Max test – no problem! 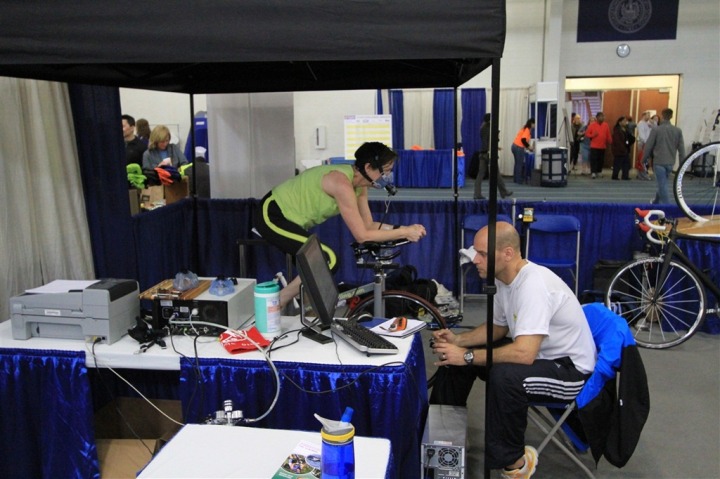 Or, if you wanted to analyze your feet, no problem there either (well, unless your feet have problems I suppose)! 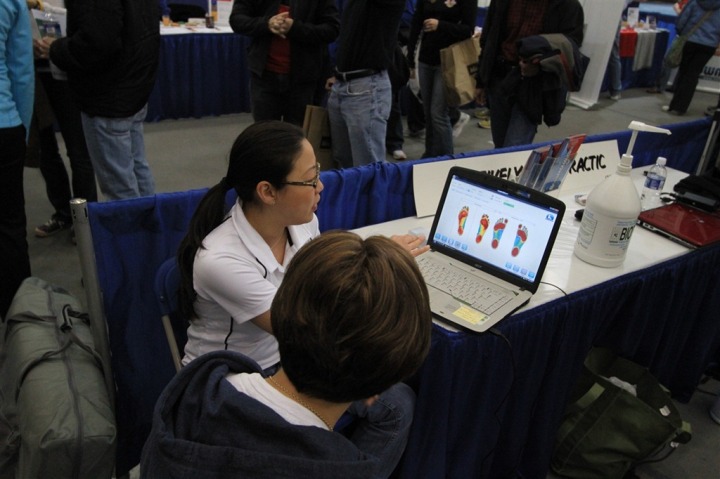 But in my mind, some of the really cool stuff was actually happening down the hall.  First up – there were tons of classes and seminars you could take.  For example they used a separate gym to do running technique sessions.  And then a different room had Yoga related items going on: 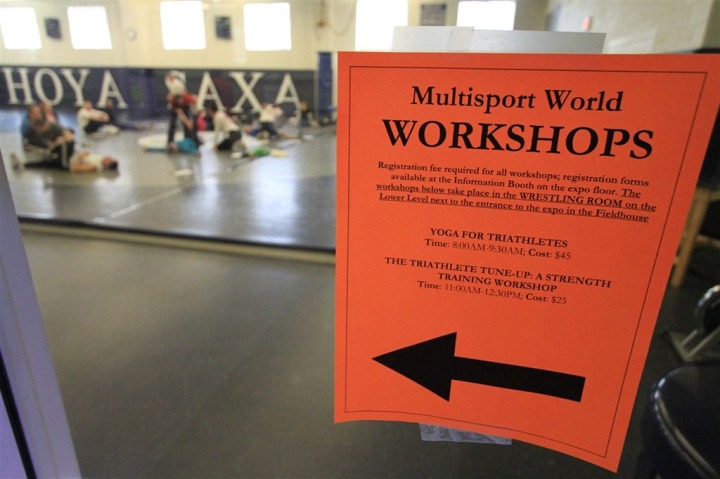 But the coolest of them all?  The competitions.  Various local teams related to the tri scene (such as local shops/groups) were competing in an assortment of races.  These were up on the board: 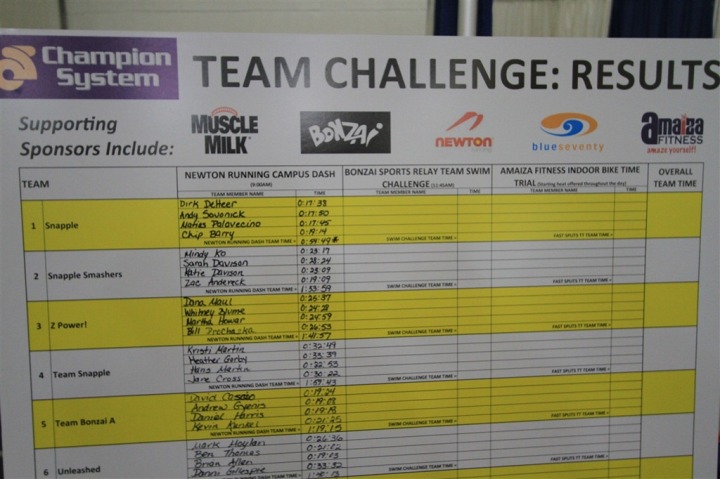 And while two out of three of these events could happen in just about any standard convention center – the swim ones definitely could not!  That’s where having it at an athletic facility starts to make sense. 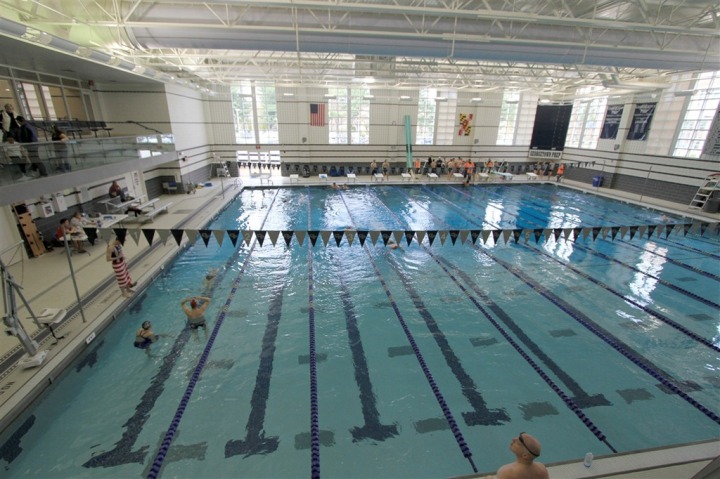 The cool part was that it was such a nice facility in that you could just hang out and watch the competitions.  Or as I overheard one girl say when a friend came in and asked what she was doing: “I’m just watching cute guys in speedo’s”.  Yes, I suppose you could do that too.

And since it was a combined facility, it was literally no more than a few second walk between any of these different areas.  We’re talking about 50-75 meters at most, all inside in a single building.  Totally awesome for lazy people like me.

For those of you considering going next year, you certainly can’t beat the deal (it’s free) and provides plenty of things to check out and do.

Speaking of awesome – it was awesome meeting and seeing many of you!  Everywhere I turned people were saying ‘Hi!’ – and it was great to be able to chat with all of you about your upcoming seasons and recent events.  Wish I had more time to hang out and chat all day!

Hope you enjoyed the tour!