You know what’s the nice part about a running race?  You don’t have a massive pile of junk that you have to setup anywhere.

Of course, central to every racers morning – regardless of sport, still seems to be the bathroom dance.  The hope that everything ends up departing the body before you have to depart the start line.  And in the case of this weekend, that was no different.  So at 5:55AM on Saturday I found myself hanging out in my friend Blue – getting the most important item of the day taken care of. 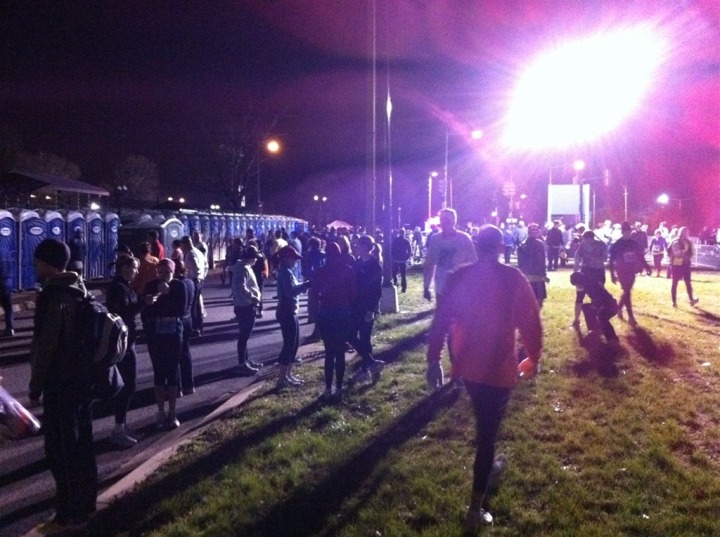 After that was set (or so I thought) we dropped off our bags inside the DC Armory (basically a giant gym run by the military).  This was great because it was WARM inside.  For some whacky reason, it decided to go from 80*F last weekend, to snowing this weekend (seriously, it snowed less than 18 hours later!).  Anyway, happiness was inside the heated Armory. 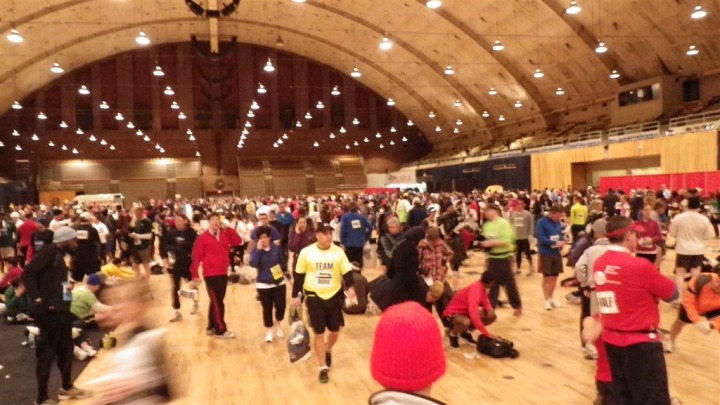 After happiness, we headed outside for our warm-up run.  This would take us in a rather large loop-de-loop around the grounds of RFK stadium, the same place where just last weekend we tailgated for a DC United game. 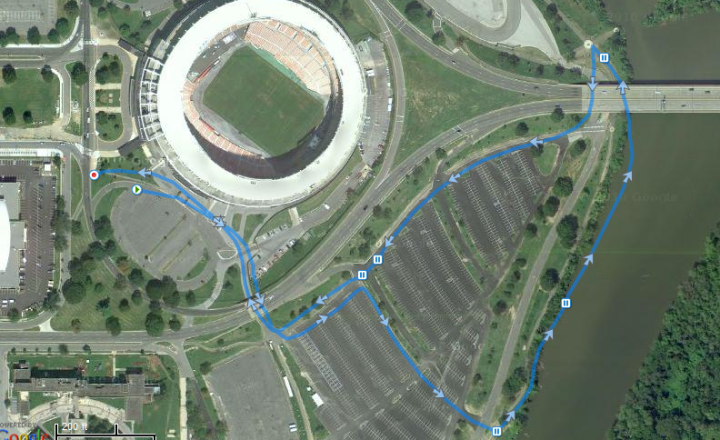 I should point out that the earlier stop in Blue may not have been fully satisfactory, so I had to make a brief and urgent shoreline stop in some bushes along the Anacostia river.  Given the Anacostia river is already a wasteland, I didn’t feel too bad about my additions.  Nonetheless, I’d avoid the bushes there for a bit in the regions noted above by the pause symbols. Sorta like a treasure map…just sayin’!

Anyway…soon it was start time!

And so we started.

I don’t have many (well, really any) photos from the actual race aside from one taken of us (which I’ll get to in a minute).

Instead I’ll walk ya through the whole shebang, chunk by chunk.

First up was the race plan.  As you may remember, I wasn’t actually racing for myself – but instead pacing The Girl.  She wanted to go sub-7 pace.  Given I’ve previously done that both for this distance and a full marathon, I felt relatively confident that I could pace her to her goal pace.

In addition to my confidence, we had something more useful – a race plan from our coach (he happens to coach both of us).  This plan significantly highlighted the concept of not going out too fast (one of The Girl’s trademark maneuvers) and then maintaining a set pace of 6:46 for the rest of the race.

Our start order had us starting in Corral 2, which I believe was basically anyone from a 6:30 pace to roughly a 7:15 pace.  This meant we were only about 50 yards from the start line, so that only took about 20 seconds to cover once the gun went off.

The challenge to starting in the front is people still go out far too fast for their abilities.  But with Mr. Garmin FR310XT in hand, we kept a nice even pace for the first mile – running a 6:45 split.  Just about perfect.

In fact, the first six miles were pretty close to what we wanted.  We were a bit fast in some downhill sections between miles 3 and 4, hence a few seconds fast – but otherwise about where we wanted to be.  You can see the split above in the third column.

It was around this time that we saw Lindsey.  You probably remember her from many of our adventures.  She was out cheering for us and managed to snap off one quick picture as we flew by.  I’m in orange looking back at The Girl (this was actually up a hill at this point, so I was in ‘encourage mode’). 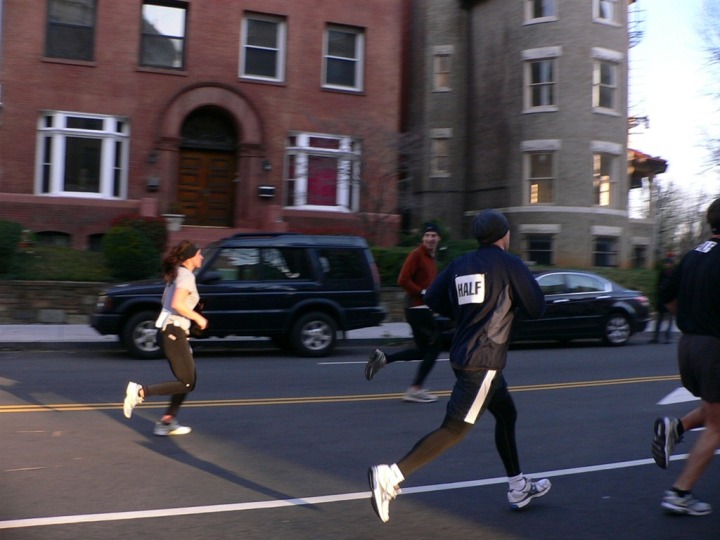 By the time we finished up the first 6 miles we were starting to head into some rollers as we ascended into the hills of Washington DC.  Miles 5-6 had some hills, but as you can see in the paces above, we managed to largely stay on target. 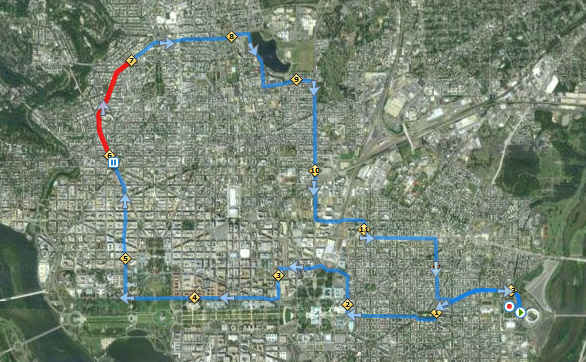 But when mile 7 came along – that’s when things got a bit problematic.  At that point we had been climbing for quite a while, so the intensity was increasing.  The only reason that mile 6 was realistically ‘on-target’ was because it included a downhill segment allowing us to get back some of that lost time.  Regrettably, mile 7 didn’t have such a long segment:

So mile 7 was a bit rough, and our slowest by a fair margin.  Having raced a variation of this course a few years ago – I knew this would be an area that we’d have to make up for later on (or push harder on), but quite simply the little engine was giving it all she could!  No worries though, we’d catch up a bit later.  As you can see, for the next few miles after mile 7, we got things pretty much right back on pace:

I was happy to find that neither of us had any meltdowns along the way.  While we do workouts together virtually every day, we actually very rarely are ‘pushing’ each other from a pace standpoint.  This is simply because usually our workouts are structured enough where it tends not to be a case of ‘push harder’, but rather a case of ‘push specificity’.

Luckily, she found that my gentle prompting wasn’t too much…or she was just too tired to yell back.  Either way, I’ll take it!

We pushed the pace as fast as her little legs could turnover for this last section – and ultimately ended up with a 6:55 pace – a PR for her by quite a ways!  In addition to the PR, we both got some shiny little finishers medals: 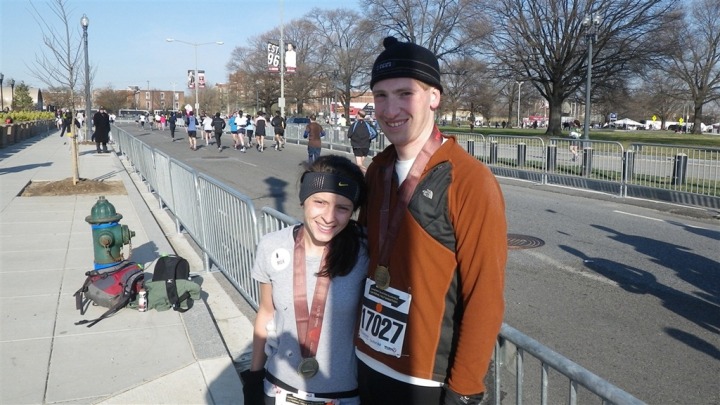 Actually, they weren’t really little at all.  In fact, they were pretty sweet and hefty: 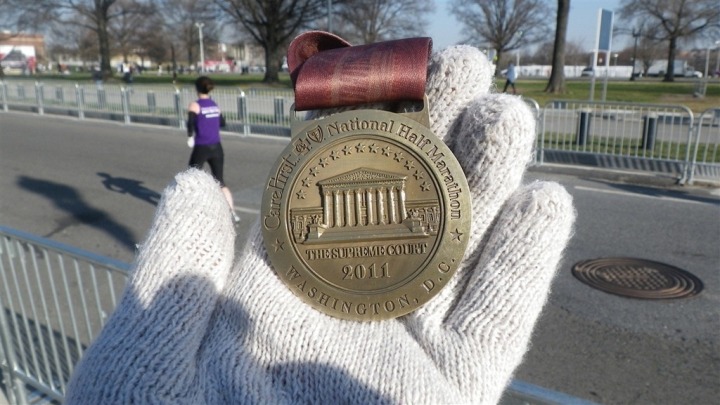 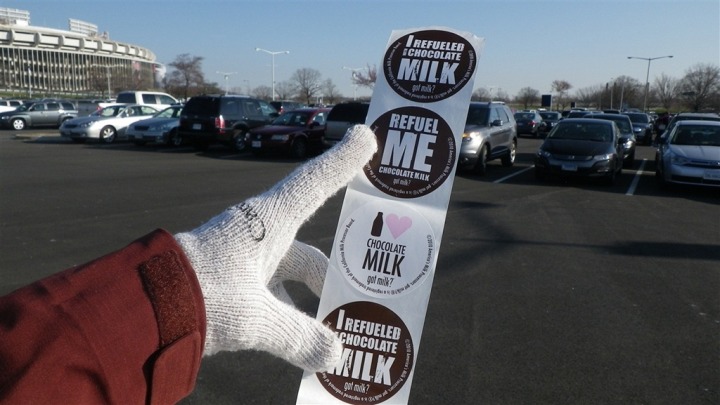 So there ya have it – my pacing report.  In the next few days I’ll share some of my secrets for how to pace using a GPS watch and how to mesh that with races (including ones that don’t have mile markers, like National didn’t).

Thanks for reading the race report!

Of course, if you thought this was my entire weekend…you’d be mistaken.

After finishing the race – we quickly headed home and began 5 hours of nonstop baking creating 17 dozen cupcakes for a cupcake competition.  While The Girl will be posting all of those details on her blog, she also entered the cake competition…and kicked some ass there.  Since all of you are in the triathlon/running/swimming/cycling crowd, I highly encourage you to run over to her post and check out her – award winning – cake.  It’s awesome.

Oh, and here’s me doing cupcake sales after it calmed down a bit (I did baking, decorating and cleaning too).  I got pretty good at it!  You wouldn’t believe how crazy packed busy the place was!  We sold out! 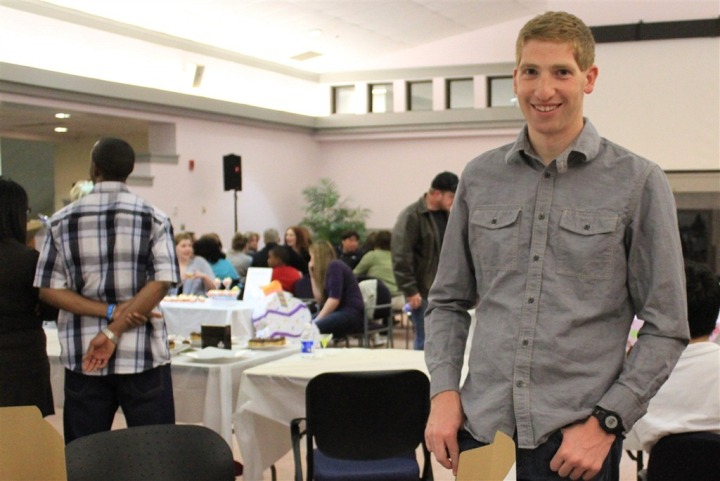 Anyways, hop on over for the coolest cake you’ll have seen in a long long time!

Oh Part II – I’ve got a wrap-up of the Multisport 2011 World Expo that I went to on Sunday as well coming too!  Just too much cool stuff on the way!