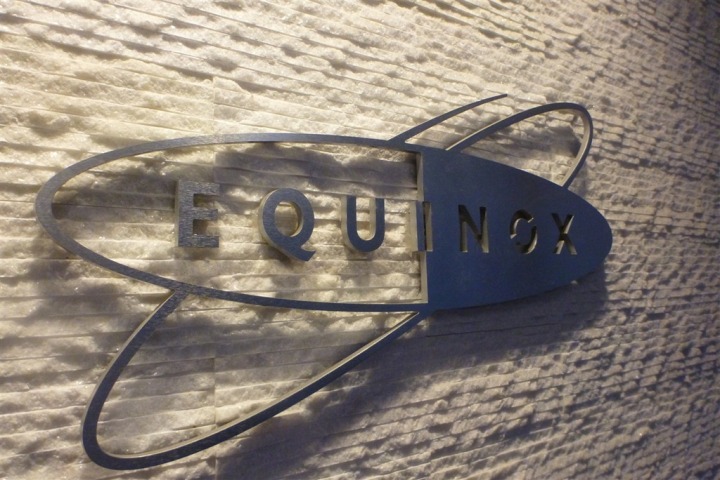 As you’ve probably noticed – I’ve been super hesitant on publishing a race schedule this year.  Not because I don’t want y’all to know where I’m racing – but rather simply because I don’t know where I’m racing much more than a few weeks out.  My work travel schedule is about to go from zero to non-hero here over the rest of spring and summer, so I’m basically just choosing races based on a last minute travel schedule.

One of those races I stumbled onto a month ago was the Equinox indoor triathlon, held at my local Equinox gym.  You may remember last year as part of the Men’s Health partnership that they got me membership into Equinox.  I didn’t use it too much most of last summer since it was somewhat out of my way, but with a change in my daily commute location this past fall – it’s now smack on the way to/from work – making it quite ideal.

So why focus on a smaller indoor triathlon? One word: Alcatraz.

See, the top 75 places nationwide in the Equinox indoor triathlon (across all their gyms) get slots to this years Escape from Alcatraz triathlon.  Getting a slot to Alcatraz is normally only done via lottery (majority of slots, 1,700/2,000), a small pile of slots won at a few races, and some charity slots.  So this seemed like a pretty sweet opportunity.

After studying last year’s results, it became clear that I had a pretty good shot at things.  This is likely because Equinox markets itself towards being the ‘sexy’ gym.  Don’t believe me? See this add, or the one below (link potentially barely NSFW): 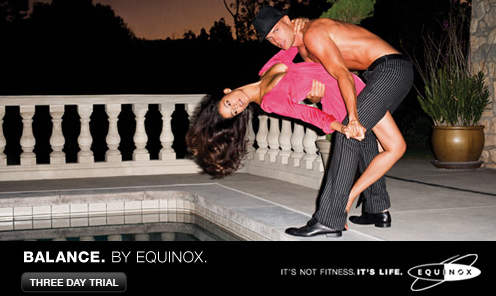 As such, what I’ve found at my local Equinox is that most of the folks in there tend to either fall towards the 20-something’s ready to go out to the bar (solid scenery for both genders), or, in the case of the specific Equinox I go to – the lawyers from the piles of law offices above the gym.  Neither scenario tends to result in a significant pool of very fast triathletes.  Fit and pretty people, yes, but not necessarily fast endurance athletes.  The results from last year most definitely support this observation as well.

So for the past 3-4 weeks I’ve been focused on training for that.  My coach and I slightly changed the focus off of the GW Parkway 10-Miler for April that I had been tentatively targeting.  We integrated more pool swims (read: I actually started following that section of the plan regularly again), and we traded regular bike trainer rides for the spin bikes they were using.  Further, we shifted some running to treadmill race pace running.  More on that in another post though.

With all that background – let’s get into the race!

Following my time at the DC Multisport Expo I made my way just a few miles away to the Bethesda Equinox.  Normally I spend my time at the Tysons Corner one, but this was closest to the expo – so I figured it made sense to register there. 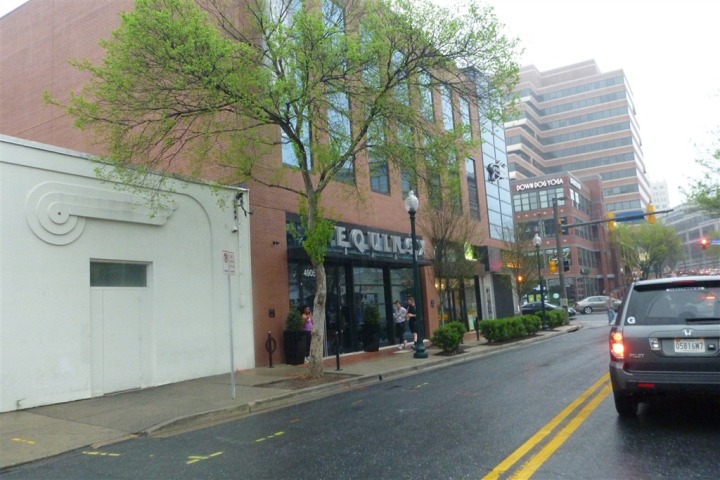 Upon checking in and paying my race fee of $25 (all of which goes to charity), I received a rather hefty race bag.  Inside were about 28 bottles of liquids, a handful granola bars, and a swim cap. 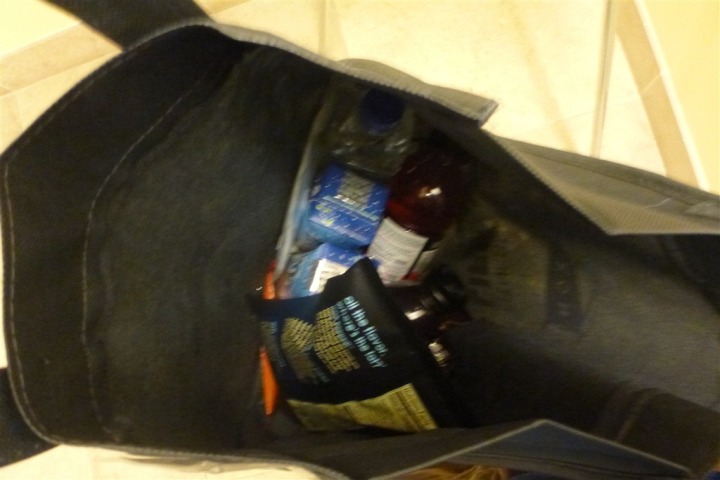 I was told to swing down to the pool and check-in there for my swim wave.  When I checked in I found out I could move up my timeslot from 4:45PM to 4:30PM, since one of the 4:30PM athletes had cancelled.  Since I was there a bit early – I was happy to also start earlier.  I then headed upstairs four floors to get my spin bike configured and dialed in, before returning to the pool – ready to swim.

This particular Equinox has a 2-lane pool (my usual Tysons one has a three lane pool).  So they were doing two athletes at a time.  The swim is simple time-trial style, with you going all out for 500 yards.  By time I got there for my 4:30PM slot, someone else had cancelled, leaving me to my own devices for 500 yards. 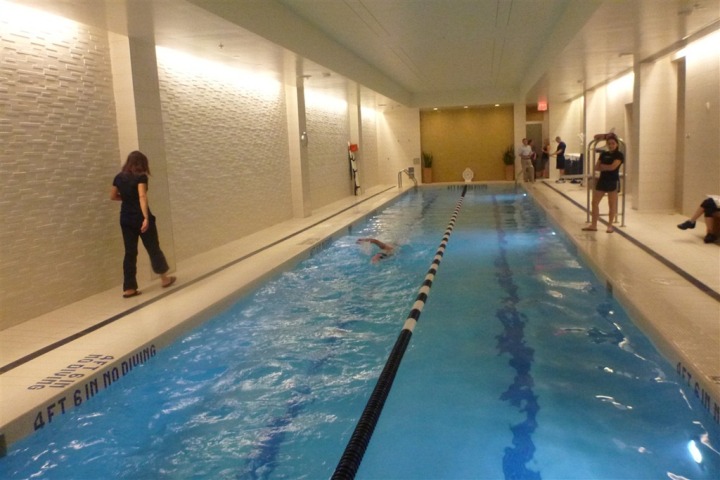 (Not me above, the person prior to me)

Without much fanfare, my lap counter gave me a countdown, and I was off!

Now, I haven’t had too much focus on swimming this year, thus my swim times haven’t fully recovered yet.  So I was actually pretty happy that after the first 250y I was on pace for a sub-7 swim.  A high school and collegiate swimmer I was not.

The counter person was there to count laps and then signal you with different colored paddles depending on which lap you were on – halfway or one lap to go.  But since I had the FR910XT on and counting my laps, I really didn’t have to think too much.  Plus, with only 500y worth of laps, a simple glance at the time will usually tell you what lap you’re on. 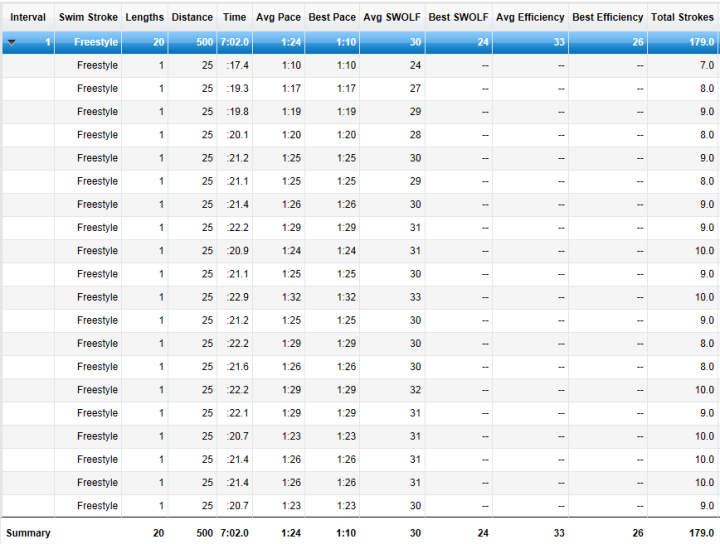 Up until that point, I had knocked out the fastest swim of the day at that facility.  Though, one of the instructors would go after me and managed to best me by a few seconds.  I am willing to bet though that if we were competing head to head (lane to lane), it would have been a heck of a fun swim.

With that, it was off to the bike!

Now’s a good time to mention how the transitions work.  It’s a flat-rate 10-minute transition.  You get 10 minutes to wander yourself from sport to sport.  This almost gave me enough time to get a massage in between sports.  The reason for the elongated static transition times is primarily due to staggering of participants, and safety (avoiding people running up stairs while wet).  Speaking stairs, it was time to make my way up the four flights of stairs to my bike: 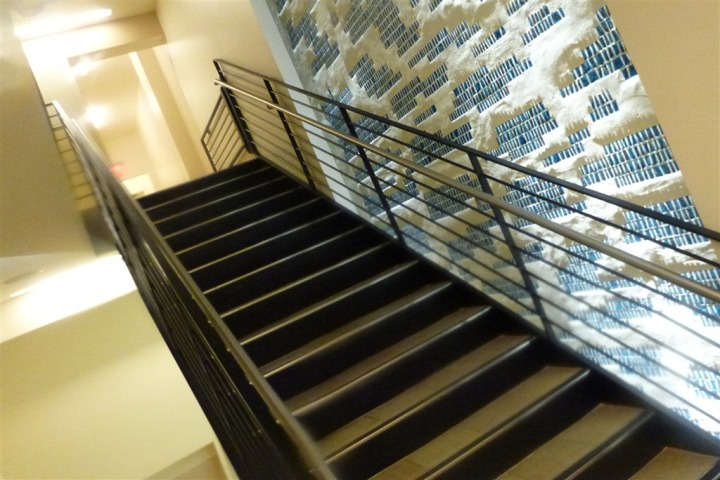 Since I had already configured my bike, there wasn’t much else to do.  I had also already placed my iced water bottles there.  Which actually, is a good time to mention that.  For reasons slightly unclear to me, the Equinox gyms are kept rather warm.  Like tropical greenhouse warm.  And, there’s no fans in the majority of the club.  For me, overheating is my primary enemy in endurance sports.  Since keeping water bottles cold longer term is an issue – coach suggested a cooler of ice for the bottles until I got to the gym.  But I couldn’t find a cooler, so I just used a pot from the house for keeping them cold in the car for a few hours while I was at the expo: 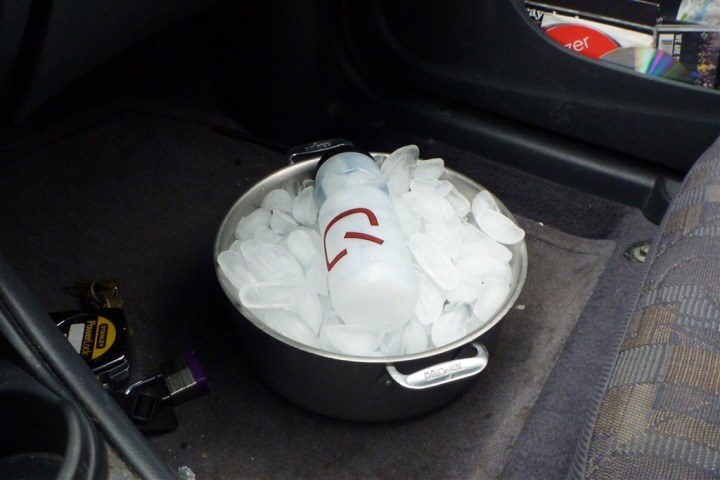 Once at the gym, they were still nice and icy.

At any rate, the bike is done on ANT+ enabled spin bikes, the same ones I’ve talked about in the past.  They’ve got two pedal types for both Shimano mountain bike and road bike cleats, as well as an adapter cage for regular shoes. 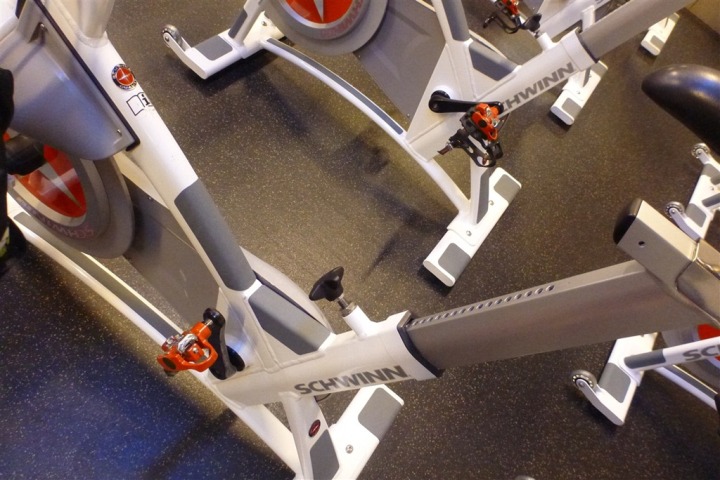 The bike leg was 10 miles, with you controller cadence and resistance.  Earlier I had understood it such that resistance was set, and you could only control cadence (to control speed) – but in the end we could control both.  This meant my strategy needed a bit of on the fly tweaking. 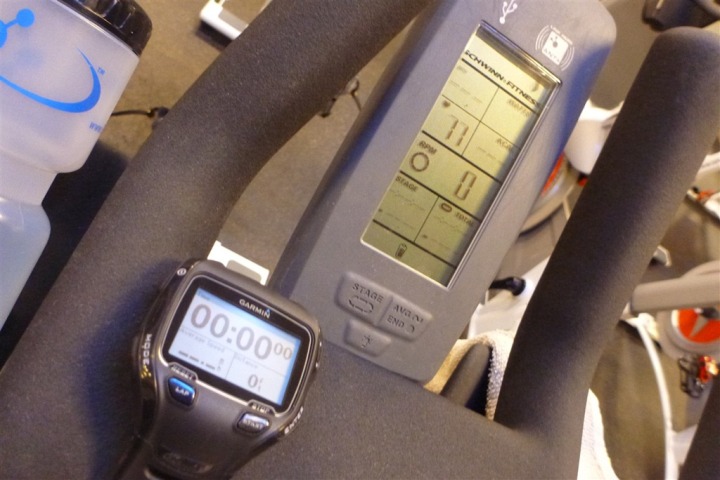 I started off and sorta stumbled around getting up to speed, trying to balance adding too much resistance too fast with speed.  Wattage on the display units is unfortunately almost always incorrect since they aren’t calibrated – so I pretty much ignored that.  Instead I focused on cadence and speed, with speed being the only thing that mattered.

After getting up to speed I kept the speedometer pretty steady at about 27-28MPH with a cadence of about 115-120.  Though, as I realized later on – it would have been better if I had lowered cadence and increased wattage.  I played around with a few different options, as it’s a tough balance to find just the right mixture to net you the highest speed.  A game really.

I would note that in this particular scenario, those lighter athletes (mostly women) are somewhat disadvantaged, as normally wattage output is evened out by the fact that the rider would weigh less.  But in this case, it’s assumed that all riders weigh the same.  That’s why when folks talk about power, they don’t (or shouldn’t) talk straight watts, but rather watts/kilogram.  That helps to even out the playing field between someone like myself, and a much lighter 110lb rider. 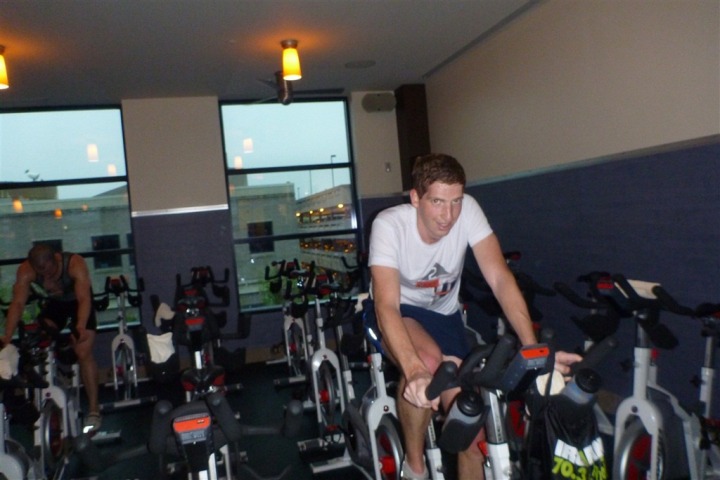 I continued to drag on, and was pretty much soaked by about half-way through.  With no fans on me in a warm place, I was basically like Fukushima – slowly boiling over.  Thankfully with two bottles of ice water to keep me cool – I managed to stay upright.

Since I had 10 minutes to kill – I immediately made my way downstairs and outside.  It had gone from being 87*F on Friday in DC, to about 55*F and rainy on Saturday.  Knowing this would be the coolest place I could find, I hung out there for almost the entire 10 minutes.  Allotting myself just enough time to get back upstairs.  Along the way I changed into a running singlet – simply because my other shirt was drenched.

Here’s the lovely view from my T2 spot: 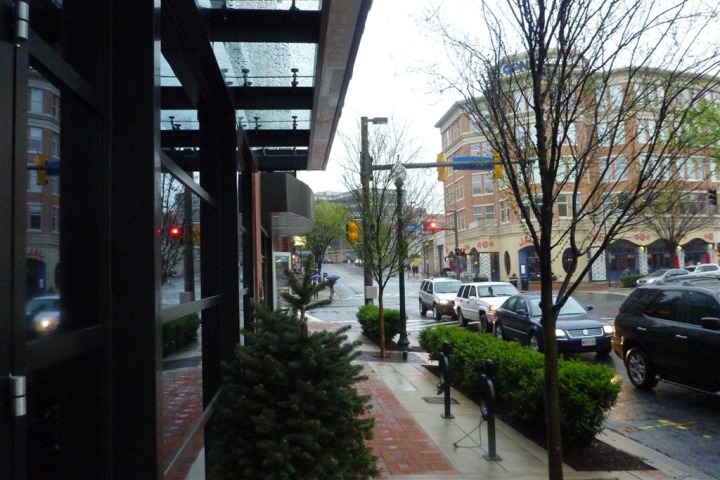 With that, it was onto the treadmill I went: 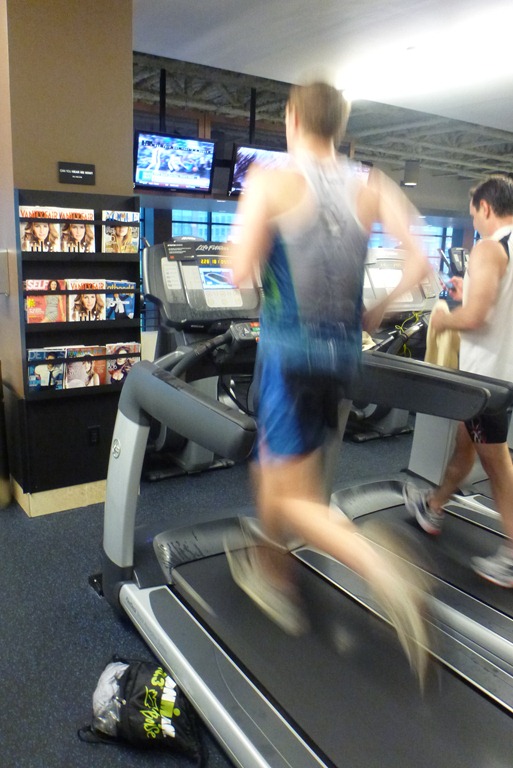 I had previously planned on ramping up over the course of about a minute from 0 to 10.4MPH (5:46/mile).  But as I got up to speed, I was feeling a bit light headed.  So I decided instead to keep it at about 6:02/mile for a bit, to get me closer to 2 miles before kicking it up for the last mile.  I figured it would be a fail to faint and fall off the back of a treadmill.

As you can see, my pace was pretty much set it and forget it – with only a small blip towards the end as I would increase pace.  The chart below is via the footpod tied to my Garmin.

On the other hand, my heart rate was definitely on the rise:

The only challenge with running your butt off for 18 minutes straight on a treadmill at a static speed is not getting bored.  You end up constantly looking down at the treadmill and realizing you’ve gone only .03 miles since the last time you looked…11.6 seconds ago.

So I would force myself to pick a TV up on the wall and watch 3-4 commercials before I would look down again.  I didn’t have enough concentration to pay attention to an actual show – but a TV commercial kinda worked.  It’s a technique I often use in treadmill running.

By time I got to 3 miles (just shy of 3.10 miles) I had it in the upper 4/min/mile range.  My only goal here was to edge out a few extra seconds – and not fall off the back.  In retrospect, I probably should have been a bit more aggressive on my ramp – and jumped it up a bit faster for the last mile, earlier. 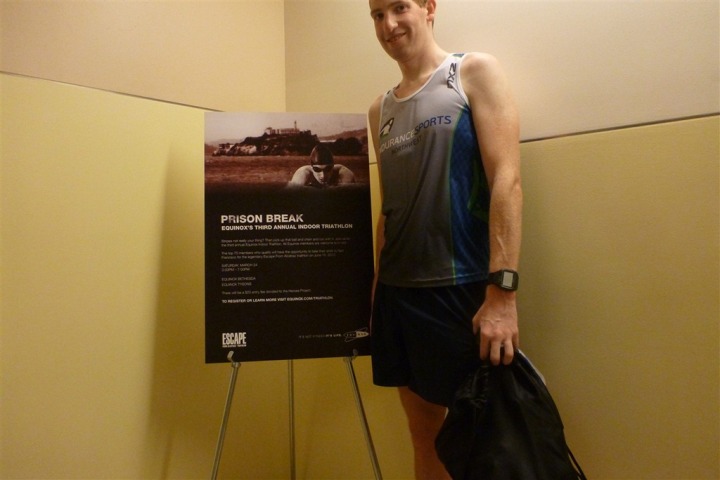 Overall, at my local gym this put me in second – behind one of the instructors (and local triathlete).  Nationwide, which is what counts – this puts me in 8th place. 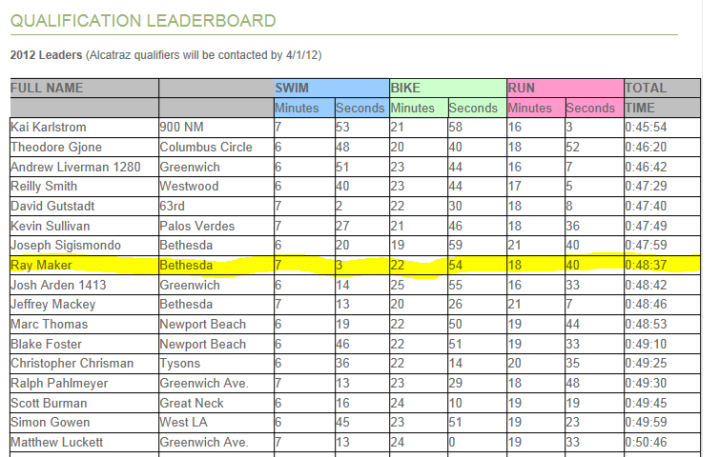 With 8th place, that’s definitely within the Top 75, and good enough for a slot to the Escape from Alcatraz this June 10th in San Francisco.  Woohoo!

I’m looking forward to going out and enjoying that race.  I know some sections are a beast (looking at you, Mr. Sandladder) – but it should be a blast.  Plus, I love the San Fran area.

As for Equinox – they put on a good event, well organized, and easy to compete in.  Plus, if you were new to triathlon, it would have still been enjoyable.  The only bummer is that with the smaller pool they had less athletes competing at once – so you lose some of the race atmosphere that you might get in a bigger pool with more competitors.

So, if you’re looking for a good way to get to Alcatraz next year – this might be just the place to go!