Good morning!  We’re gonna keep this post quick and to the point.  Mostly because I’m running out of steam, worked 13 hours today plus a hard (but fun) interval run, and it’s getting late.  Further, I’m still contemplating ice cream.  And I need to decide how I’m going to obtain said ice cream, thus, gotta get typing! 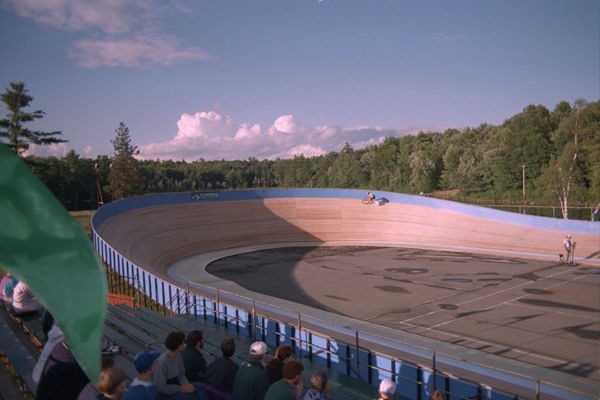 I mentioned this project back a month or two when it was first announced that a group is looking to build a DC Velodrome.  The project has since moved into the next phase, and I figured it’d be great to make that more visible – especially because I think that this would be an awesome long term asset to the community – both within cycling and the neighborhood that they’re looking to build it in.

As you’re able to see on the site, they’ve taken a bit of a Kickstarter variant on support for the project – with different phases offering different ‘rewards’ as incentive – including tickets to Pro-Am cycling events.  Regardless though of whether you want to support the project financially, they’ve got some interesting stuff up there on their site to ponder. (Thanks to Z. who sent this over to me!) 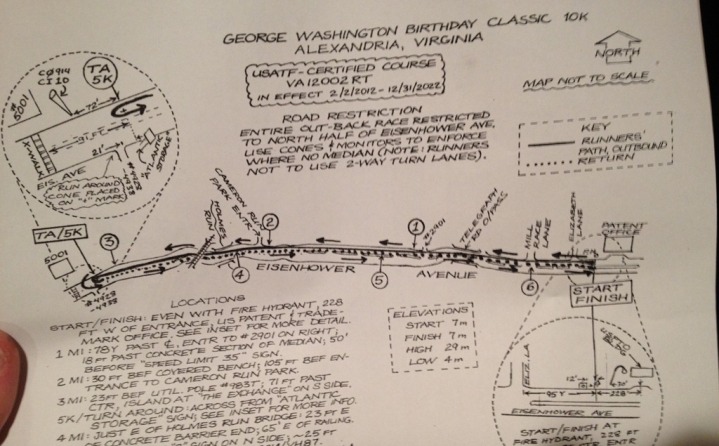 This Saturday I’ll be having a bit of ‘fun’ with an early-season 10K.  Given the race is actually run in front of my house, it would be somewhat silly to not sign-up.  Or at least not heckle runners.  The course is fast – not super flat though.  It’s got a bit of a rise towards the 5K marker (midpoint) that will cause some solid pain.  But then after that it’s screaming back down a gradually 1%-ish decline to the finish.  It’s a route I run many times a week, so I’m jazzed to have some fun with it.

Some of you found the above photo I took a bit interesting when I tweeted it.  The course map is actually the standard USATF course map ‘style’ that must be filed for every USATF course (virtually every running race in the US).  You may remember my look into how courses are measured in the past.

I don’t have any goals or plans to PR for Saturday, mostly because I’ve really only added in some speed work in the last few weeks, so I can’t exactly expect much.  We’ll see.  If you’re out there and want to run along and are a couple minutes below 40-minute 10K pace, drop a note below.  It might be fun, or painful, or both.  And, even if your not at that pace – definitely say Hello.  I might even have stickers! 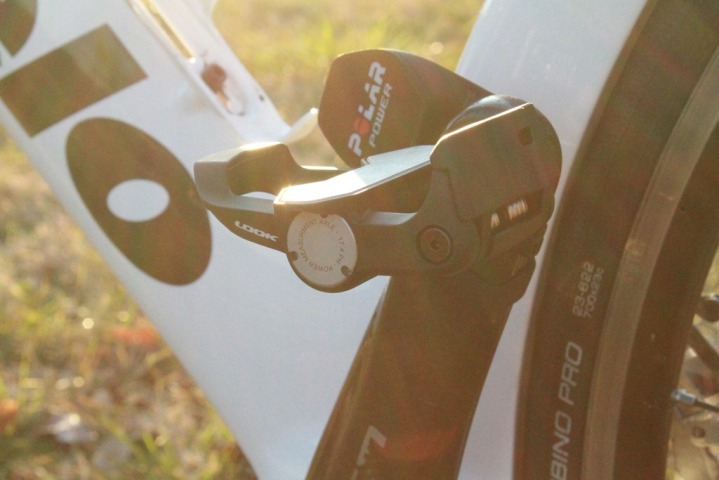 There’s been a flurry of messages posted to the Wattage Forums regarding an apparent recall of the Polar/Look Power Meter pedals.  Given this came within hours of the Garmin Vector Power Meter pedals delay announcement it made a bit of a splash.  So I reached back to the Polar folks to get the skinny on this, mostly as a clarification point.

As you may or may not know, the Polar/Look pedals actually haven’t made it into the hands of ‘normal’ consumers yet.  Meaning, that the only folks that in theory should have the pedals are some distributors/retail shops for test/demo, various sales folks for product training, internal & external test/beta teams, a few Pro Team riders, and some media folks.  There may be an odd consumer that somehow had a unit slip into their hands – but no orders have been officially fulfilled.

With that said, some of the units within those various groups had an older firmware version on them.  Because the firmware on the Polar/Look pedals is not end-user upgradeable, they’ve asked for all units with the older beta/test firmware versions on them to be returned to the factory for updating.  They wanted to avoid a scenario (such as with mine) that the older beta/test firmware wound up causing problems.  Trying to ‘remove’ beta firmware units from the wild is commonplace amongst hardware companies – something I’m more than familiar with in other verticals.  Note again that not all units had the older firmware on them, only a subset did.  It’s this subset they wanted back.  The rest with the final firmware are fine.

It’s expected that the turnaround will be fairly quick, so like some others, I’m looking forward to getting them back.  I got them all boxed up yesterday evening after getting the word.  Off to Ms. UPS woman they go.

After yesterday’s post regarding using a dishwasher to clean my trainer tire block, a reader (Henrick) posted to the DCRainmaker Facebook page the following video.  If there was a better way to end this Friday post, I’m not sure what it would be.  Love it!

With that…hope everyone has a great weekend – and thanks for reading!  I’ve got a slew of new things to talk about after the weekend (a long weekend here in DC…well, I hope a long weekend anyway).  Enjoy!