How I ran into a WWII tank on my swim

Of course, you’re probably wandering what I’m talking about.  Well, while bumbling around the little island of Saipan this past weekend, I got word of a place where many local swimmers go and do their openwater workouts.  And while there are plenty of places to do openwater workouts in Saipan (umm, it’s surrounded by water), there’s few that start with instructions like: “Swim to the tank”.

No, we’re not talking about a holding tank…but rather a real World War II tank.  To be precise, this tank: 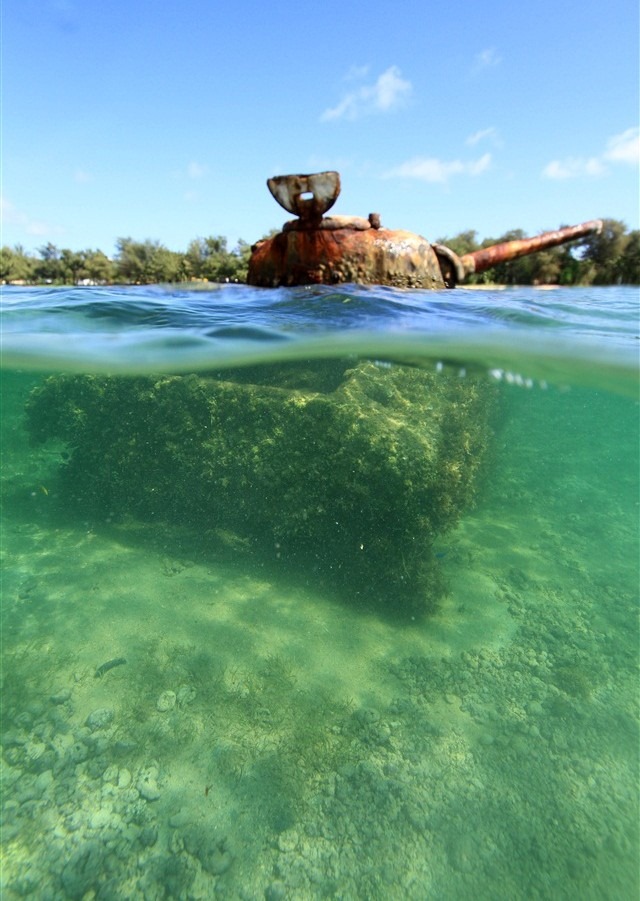 So early yesterday morning for my scheduled swim I stepped foot onto the beach and prepared to head out.  Of course, the first thing you’ll notice is that the below rock-like objects aren’t rocks at all, but rather sea sponges.  There are literally millions of them covering the entire seafloor like balls at a McDonalds play pit.  They squish and then eventually burst when you step on them.  If I owned a pool, I’d line the bottom of it with them.  Because that would be cool, like shag carpet. 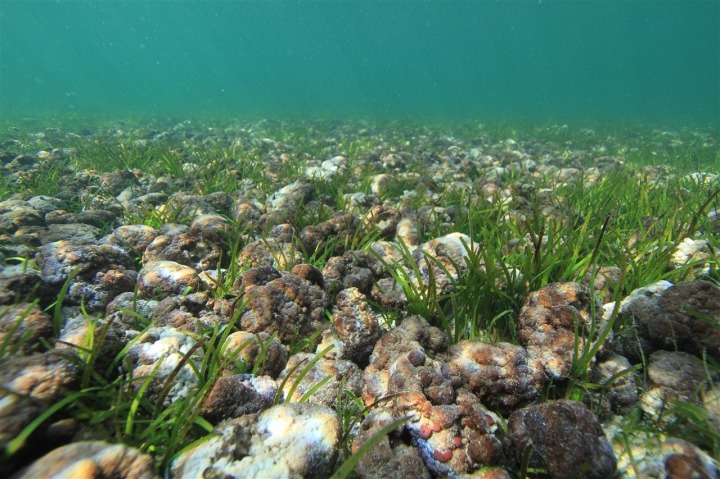 Once you get beyond the awesomeness of the sea sponges, it’s time to get to work.  The tank is 200 or so yards offshore, just enough to get nice and warmed up.  What’s cool though is the water is never higher than chest high, and usually about waist high.

While the Sherman tank may look rusty, it’s anything but abrasive.  Despite being here since July 7th, 1944, after some 65 years of oceanic pounding, its sides are smooth – not a rusty or sharp edge anywhere on it. 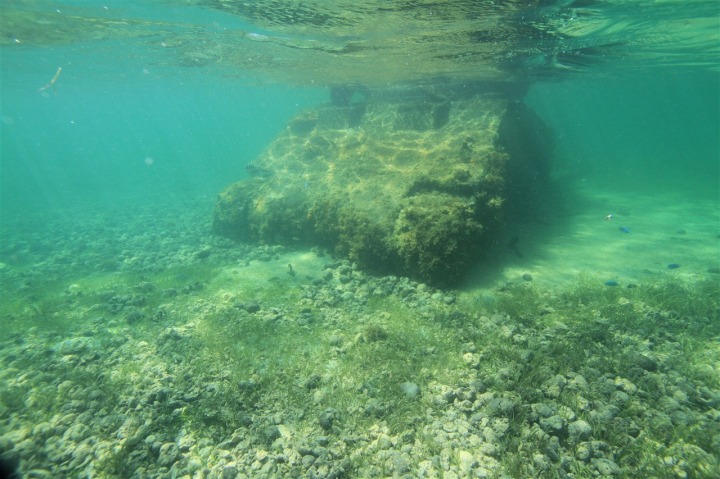 And while half a century ago the tank would have been your worst nightmare, today it’s nothing more than a swim toy for many local kids: 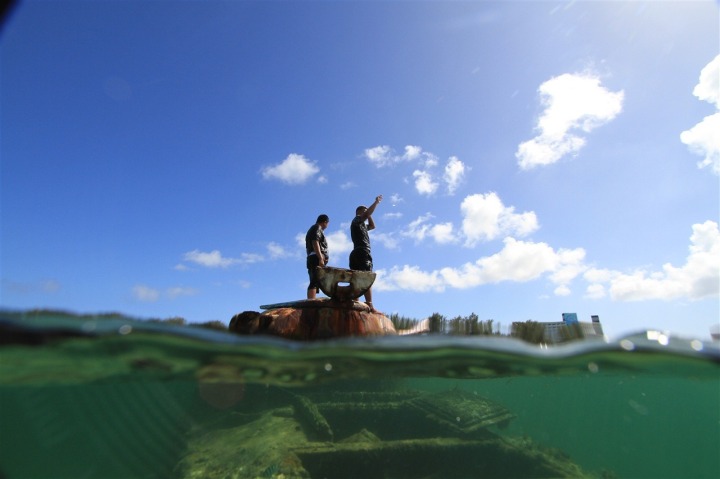 But…this post is about my swim…and I can’t be waiting all day here at this tank.  So off I go, to the second marker – which is probably about 500 yards away.

Along the way I kept on seeing these snake-skin like thing the seafloor – not sure what they were, but since they appeared dead-ish, I figured it was all-good. 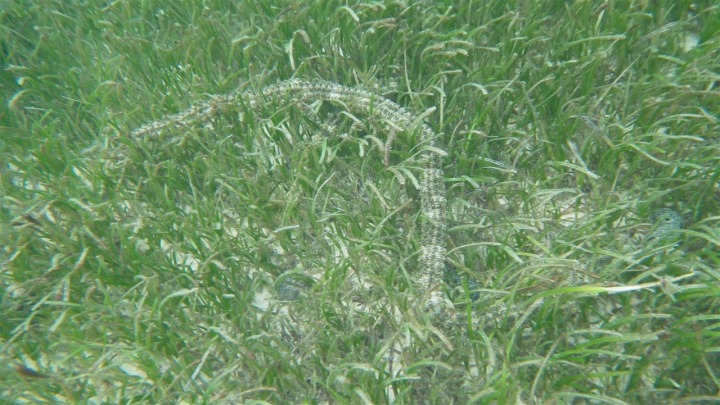 As for the second marker, what is it you ask?

Yup, another behemoth just like the first, lying quietly in the shallow waters.  The waters in these pacific islands are littered with the reminders of a war nearly 70 years ago.  It’s perhaps one of the reasons I love so much of the South Pacific.  While these tanks are more visible than most, much of the remains of wars past is simply rotting away just off paths in the dense jungle, like during my kayak trip my brother and I took. 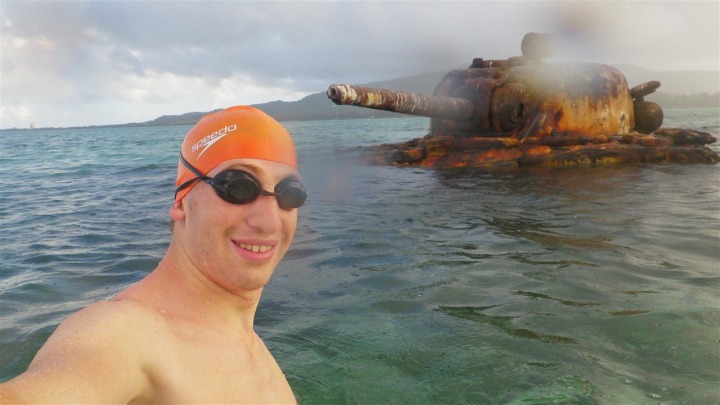 By time I got to the second tank, it had clouded up a bit.  And before I knew it, it was pouring out – which, on the bright side, made for a really cool photo. 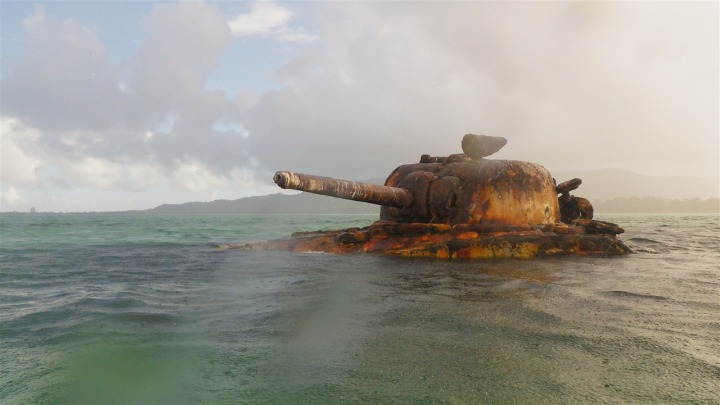 In fact, this rain thingy is sorta par for the course here in Saipan – it dumps one minute, and then is sunny the next.  It happens all day long.  In fact, before I’d leave the tank just a minute or two later, it was sunny again.  Though, outgoing the rain would obscure my sighing to my next marker. 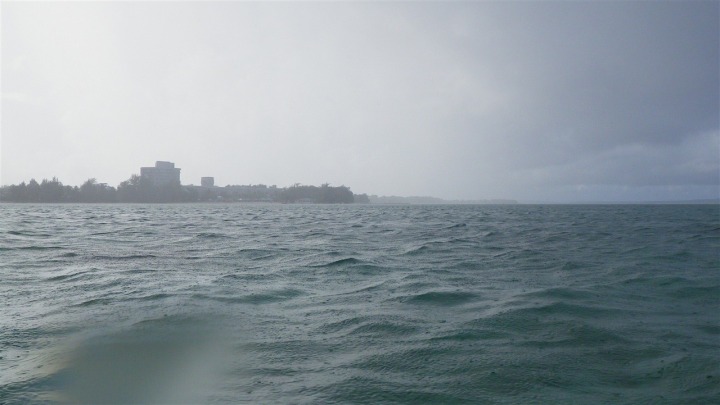 This turnaround point was downrange quite a ways.  Given it took me about 18 minutes of not-hard swimming to get there, I’m going to put it at about 1,100-1,200 or so years.

Once I finally arrived though, I was greeted with my third tank of the morning – the remnants of another American invasion attempt gone slightly wrong. 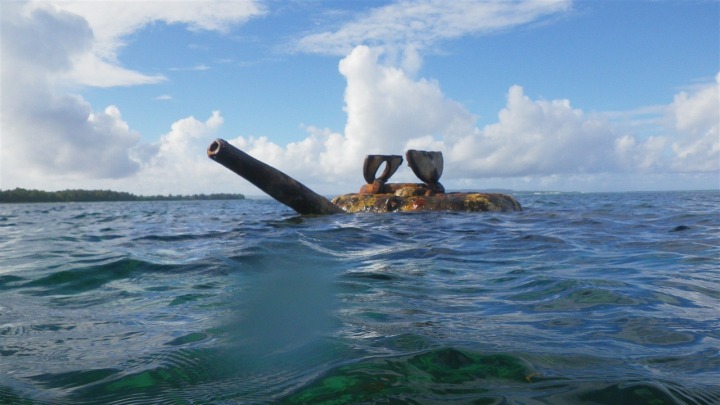 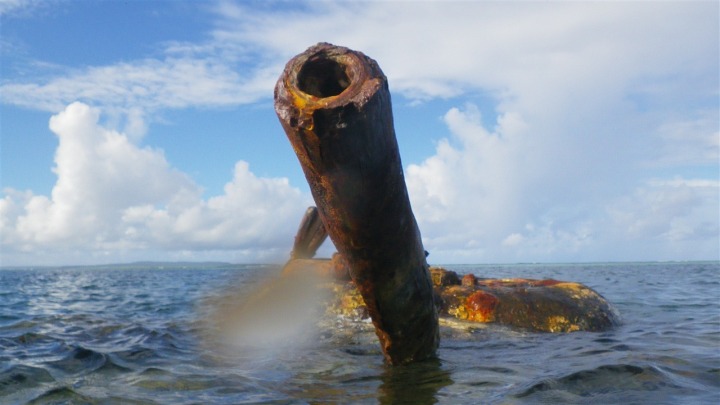 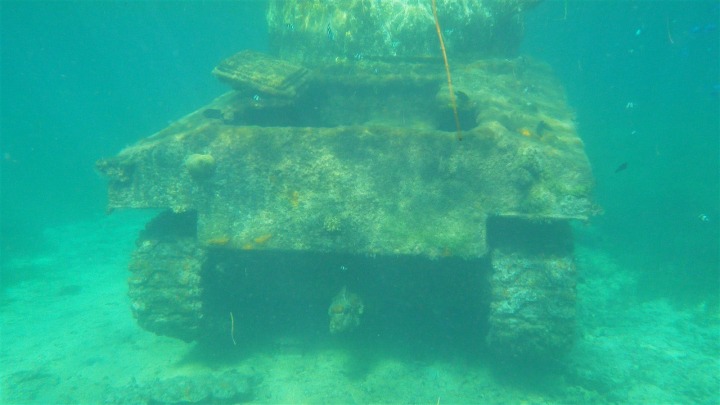 There’s actually a bit of irony in the below photo.  See those cargo-looking ships behind the tank are actually American ammunition supply ships.  They’re temperature controlled and contain stockpiles of various wartime supplies.  Should a conflict in the region breakout, they can be quickly dispatched.  There’s a never ending stream of support boats back and forth to shore. 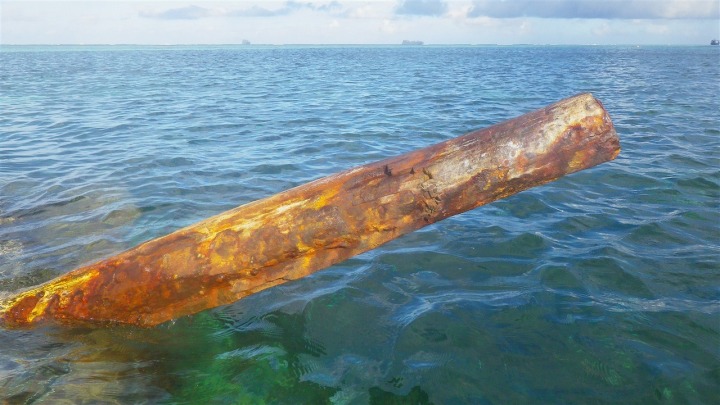 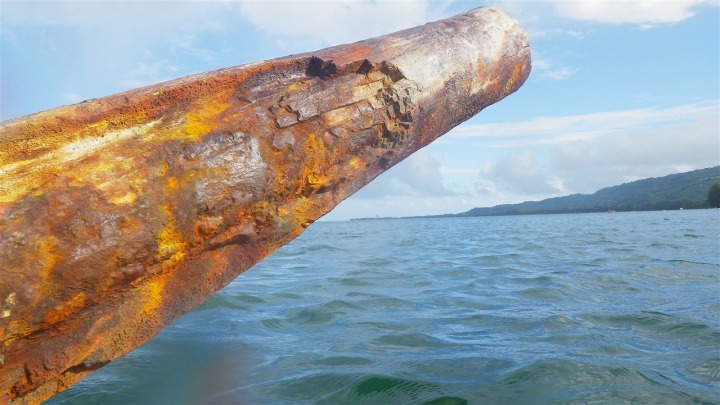 This tank was just like the rest – in relatively perfect condition, and just a shiny and smooth as the others.

Once I was done with the third take, it was time to start my trek back…this leg would be the longest though, at just over 20 minutes.  And once I was set, I’d be back to my first tank – forming a giant triangle.  After a short swim back to short, mission complete! 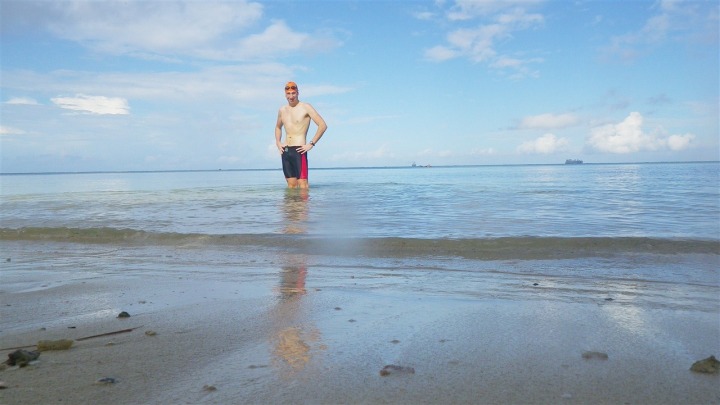 Of course, because I love to see where I’ve gone, and how far I went, there’s no better way to do this than stick a Forerunner 310XT in my swim cap and see what it came up with. 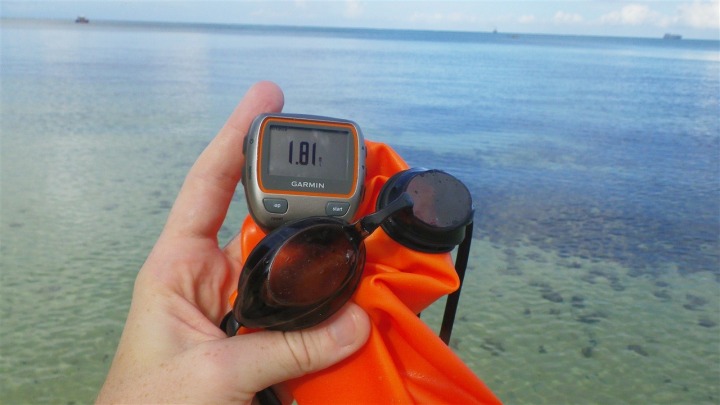 And, once you put the track through the magic of Google Maps, you get my fairly well sighted track: 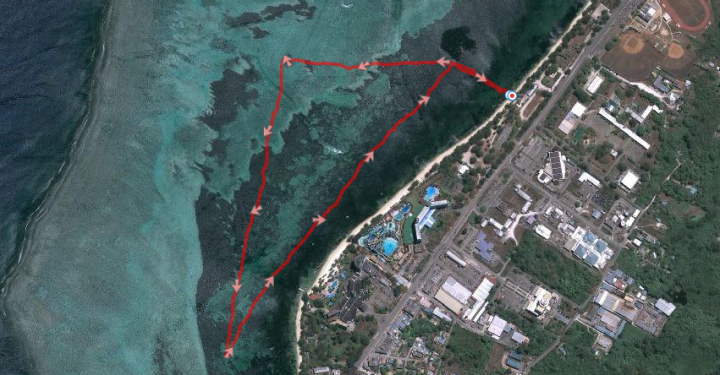 I’m actually fairly impressed with my sighting straightness – especially given I could barely see the 3rd tank (or the 1st from the 3rd).  If only I could swim so perfectly in a race…

Of course, the coolness of this place isn’t just limited to 7AM swim’s.  At various points during the year they have openwater swim races between the tanks (The Tank to Tank Swim), as well as a few triathlons too.  Though at 1.8M for the full Triple-Tank circuit, none take advantage of the whole loop.  Too bad, as you could easily make an awesome named Ironman Race – The Triple Tank Tri – and add a bit more swimming to get the right distance.

Further, the three tanks are just as cool at sunset. I went later that evening back down to beach to catch the sun setting over what was once the land of the rising sun. 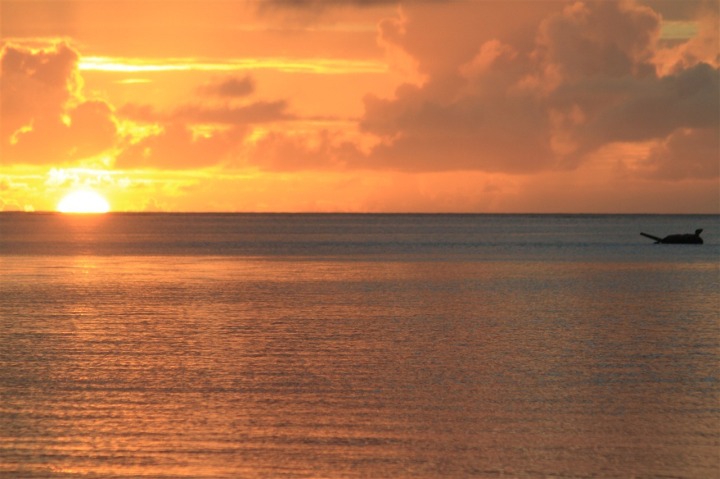 That’s all I’ve got, I head back to DC here shortly, after a few quick islands to hop to and through. Watch on Twitter as I post pictures from along the way.

(P.S. – Some folks had asked yesterday what cameras I was using.  I detail most of my camera equipment out in this post (which is current).  For all of the ‘pretty’ shots, I’m using a Canon 7D DSLR with usually a 10-22 lens from Canon.  All of the underwater stuff from yesterday is the same camera, with an Ikelite UW case.  All of the underwater stuff in this post though except the first two photos though are from an Optio W90 waterproof camera that I can take with me while swimming and stuff in my swim shorts.  The first two photos and the last photo, though, are from the 7D.)