It’s getting hot in here

The good news is that I didn’t have to run.  The bad news is I still had to bike…on the trainer…without a fan…indoors.  And thus was the start to my birthday, a nice 65 minute trainer ride on little red sweating bullets.  Though it was only probably in the mid-80’s inside, with no air circulation I quickly made a small puddle in the shoes.

This particular workout’s highlight is a 25 minute high cadence set, starting at 105RPM and doing five minute blocks up to 125RPM, all staying within Z2.  It’s not a hard workout per se, more just one about focus.  It’s easy to ‘slack off’ and spin lower – but that would defeat the purpose.  You can see the slight jumps in the green line at each five minute block, up until the cool down sections.

After that I went downtown for work related stuffs.  I lucked out this week in that all my presentations were on Monday afternoon.  Anyone who presents at conferences knows the best slot is a Monday afternoon slot (sometimes also Tuesday morning) – and the absolute worst is a Friday afternoon.  I originally had a Friday 4PM slot for one of my sessions, but I’m in good graces with the organizers, so they moved me to Monday.  Sweetness.  Double-sweetness was getting one of the highest ratings of the day…  Oh, but back to Wednesday. 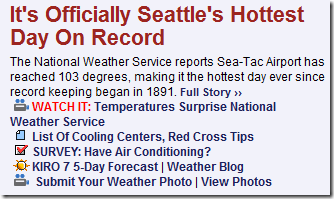 Yes.  The hottest day EVAH in Seattle.  In the history of the world.  Well, Seattle’s little world since 1891 anyway.  And on my birthday no less.  Again, all signs are pointing to my new Chipotle hot cycling shorts as the cause of this heat wave.

I got to the pool around 4:45PM, with lap swim scheduled for 5:30PM.  I figured I’d be able to hang around the pool deck and just laze about in the sun.  But…apparently not.  So instead I found a tree in the nearby park and just hung out under it instead. 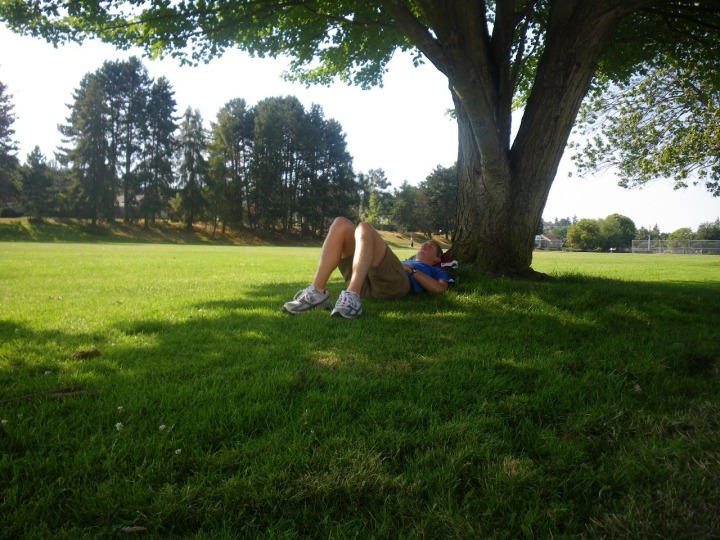 After about 35 minutes I wandered back over to the pool and went in. 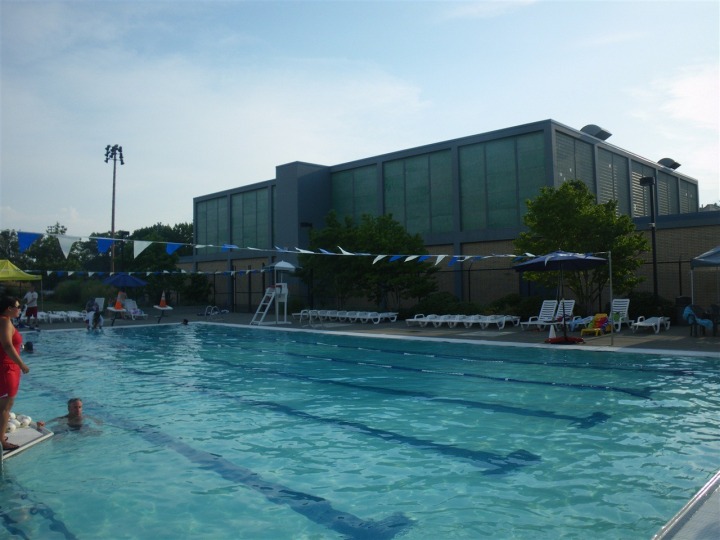 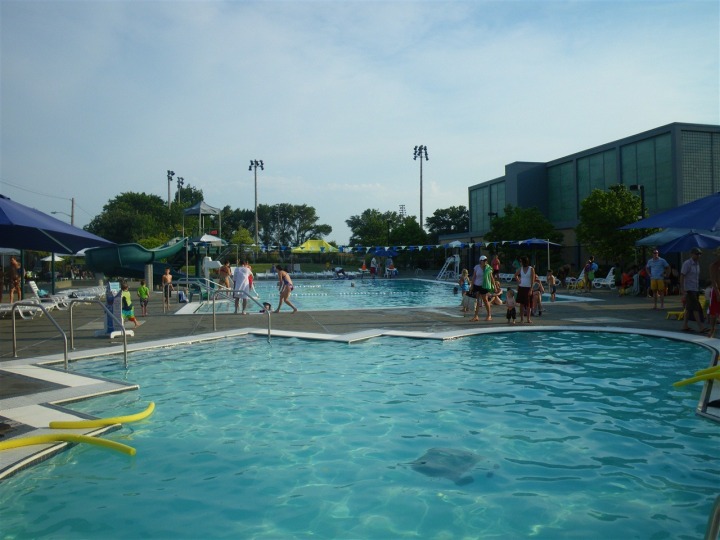 There were signs up for Slow/Medium/Fast and another Fast lane (though, not in the kiddy wading pool).  I did a quick 30 second survey on lap speeds, and then made my decision for the fastest of the two fast lanes.

At first it wasn’t too bad, with folks mostly in line speed-wise.  Anytime you have 6-7 folks sharing a lane circle-swim style, you’re going to get some backups on occasion.  No worries, usually they sort themselves out at the end of each lap.  I actually enjoy swimming with this many people, as it can on occasion force you to push it a bit more than by yourself.

But…then sometimes you get some ‘misinterpretation’ of ones swimming ability.  Now, first off – I’m hardly a ‘fast swimmer’ by any college or competitive HS standards, but by casual pool standards, I can hang with most folks who show up.  But, I think if you’re going to jump in a lane marked fast – you need to be realistic about your swimming skillz.

But…that wasn’t solving the solution.  She was slower than that.  Because…she was doggy paddling.

I then switched to one-armed fist swimming.  But, that still wasn’t enough.  And my kick was long since abandoned.  No worries though, we’re coming up on the end of the lane.  She’ll step off to the side given I’ve tapped her toes to let her know I’m there.

Now, Seattle folks are very polite by East Coast standards, so we all kept on dealing with it…for 20 minutes.  The six of us would find creative ways to get speed in, like waiting until she was almost all the way back to us, and then going in a massive 6-person train – giving her effectively a 50y head start.  But with us swimming 2-3 times her pace, that didn’t last long.

After a while and a rock-paper-scissor session at the end of the lane between the six of us, I volunteered to go ask the life guards to give her a polite nudge.  After all, I wouldn’t be back at the pool and didn’t have to risk any ‘pool relations’.  A short bit later the problemo was solved, and I was able to get into my final 3×350 interval sets – without no-goggle-lady.  Workout complete, exactly as the lap swim ended.

And we certainly didn’t want to get in the way of all the inbound pool users.  There was a massive line down the street to get into the pool: 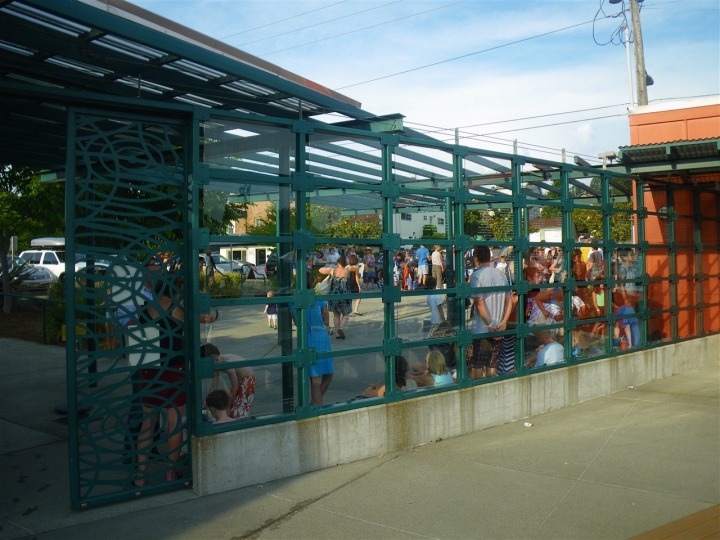 I meanwhile headed off to have dinner with my parents at a great little Italian place downtown, and then eventually have some German Chocolate Cake made by my Mom, at home. 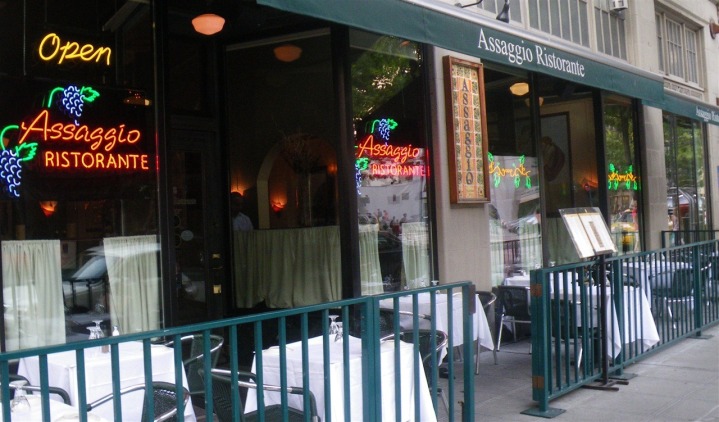 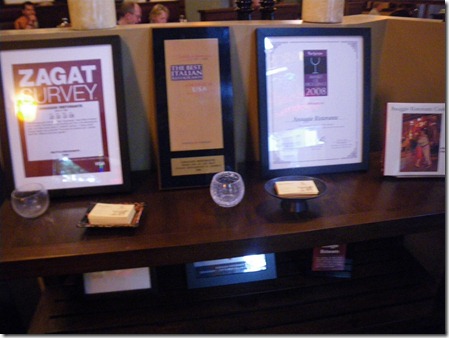 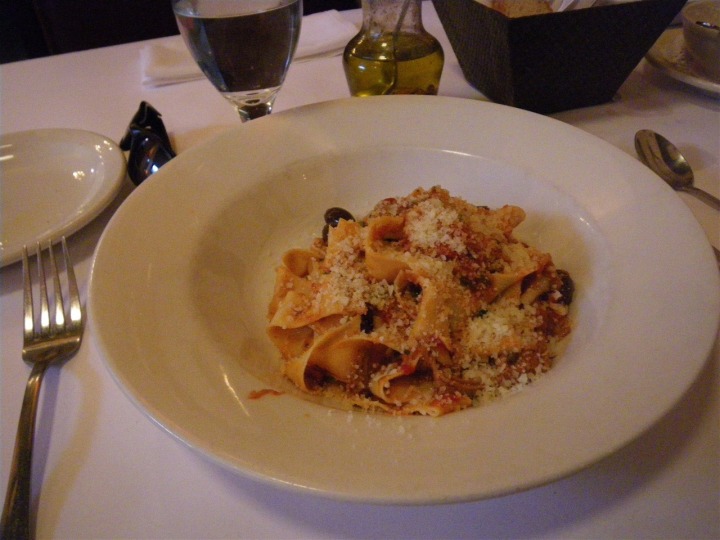 The heat was playing a bit of havoc with the cake though…but, it was still good! 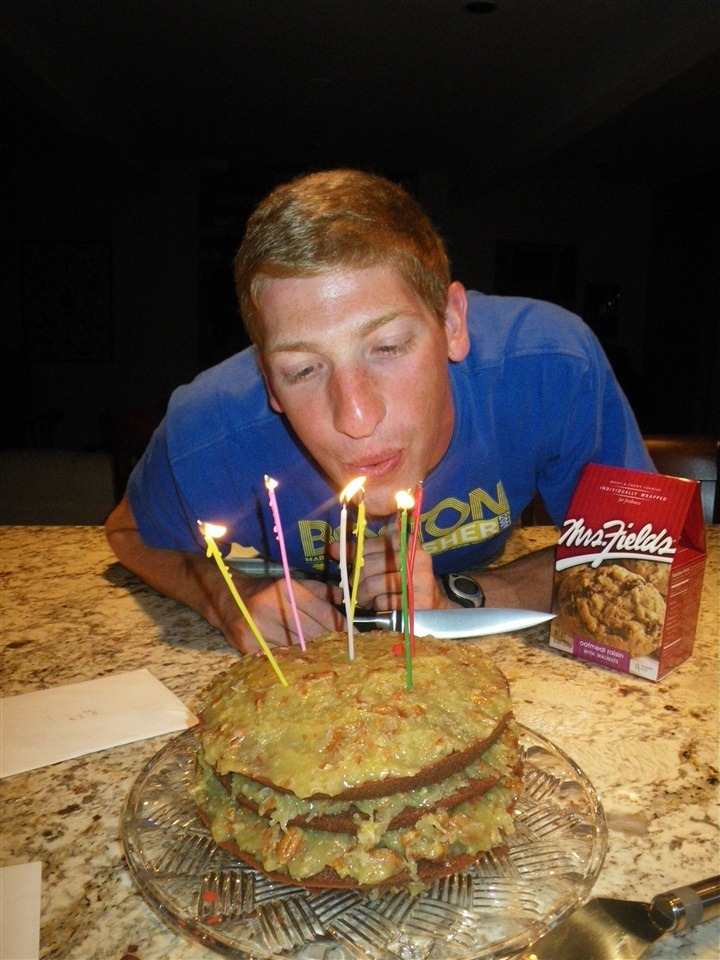 Thursday morning brought my usual bike-track-run brick.  I had wanted to go to my high school, but it was all closed off, including a sign hung just about the whole in the fence. 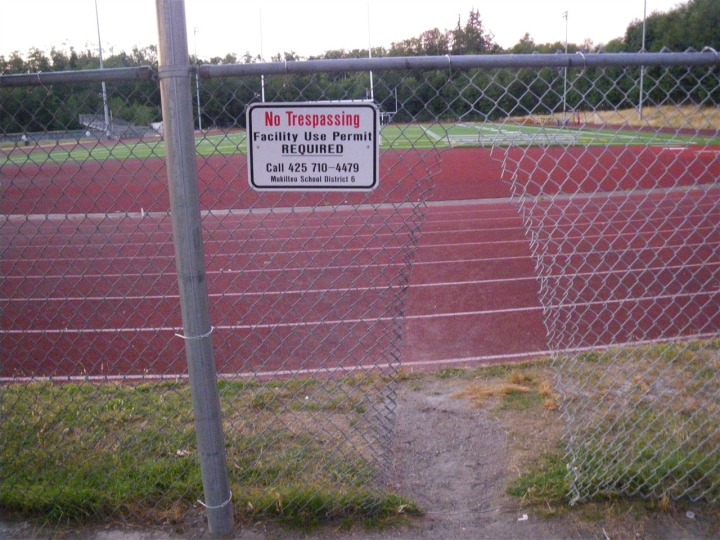 So instead I went to my middle school, located right next door.

I got setup and ready to roll.  I choose in the sun versus the shade, as it would more realistically replicate a hot race day. 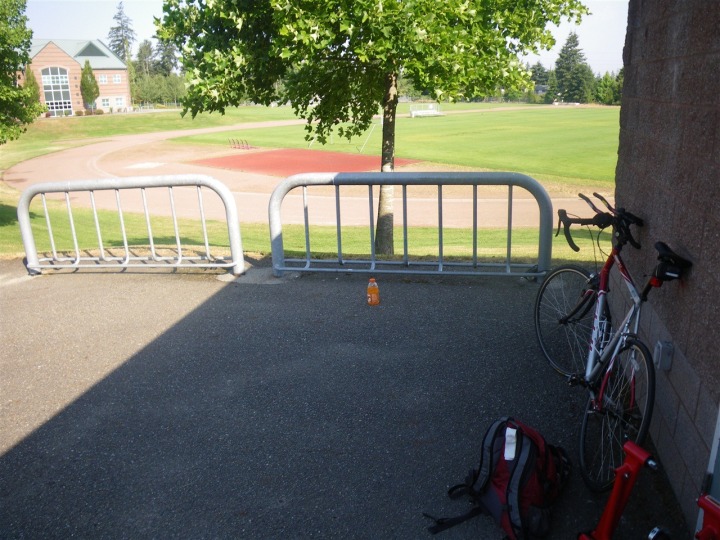 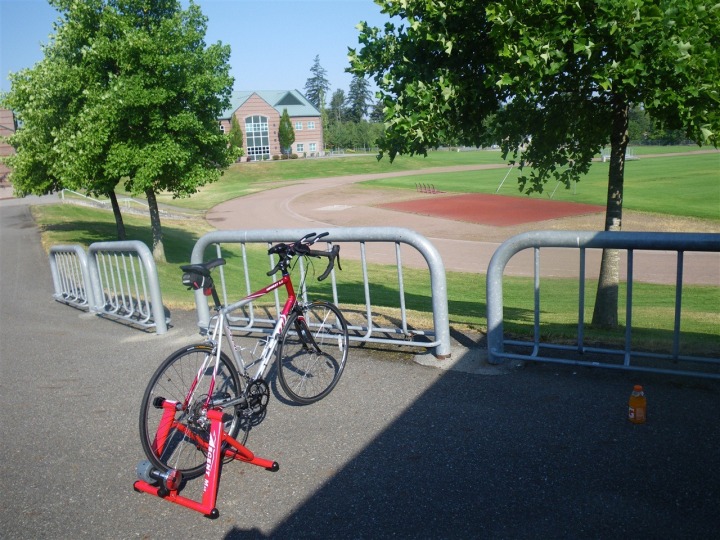 The workout would include a 34 minute bike section that quickly escalated through Z4B heart rates in five minute chunks.  I was a little concerned about my ability to get into those higher HR’s on little red (the trainer), because it just can’t hold high enough resistance.  So I suggested to my coach that I could use some hills nearby instead. 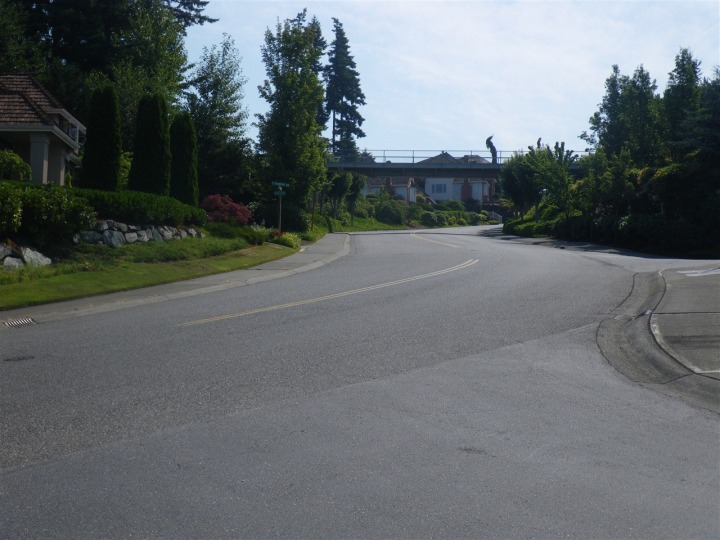 He explained through silence that my vote didn’t really count in this matter.  Well, actually he said “Hill sounds a little more daunting than I had in mind”.  And thus I was still on the trainer. 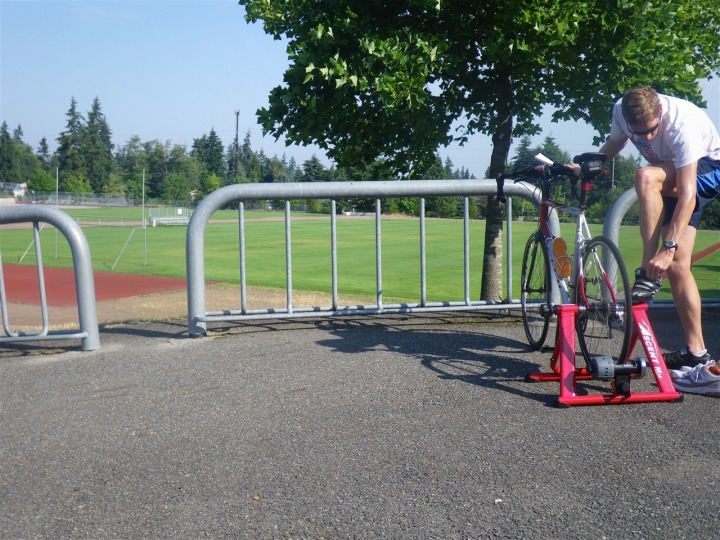 So…instead I cranked the living crap out of the trainer to really tighten it down.  Hell or high water I was going to find a way to get into Z4B.  When I was finished turning up the resistance, I couldn’t even turn the crank-arm on the bike with my arm.  Check…done…and ready to roll. 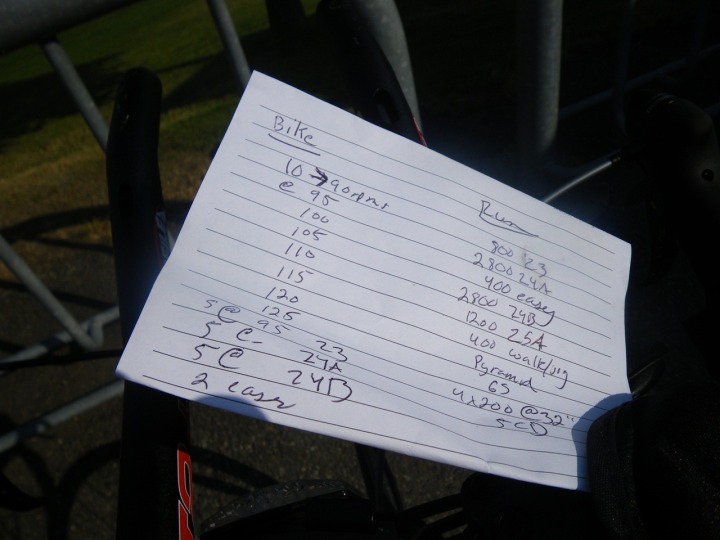 The bike went well, and with only a touch bit higher RPM’s required I was able to keep it up in zone. 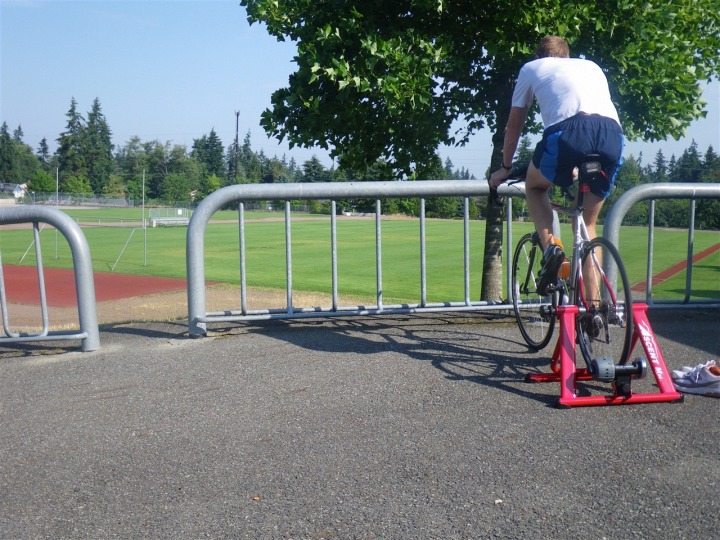 From there, it was off to the track for a nice run.  I had my little camera all setup to record every 20 seconds, but somehow the wind tipped it off my backpack after only 2 shots. 🙁 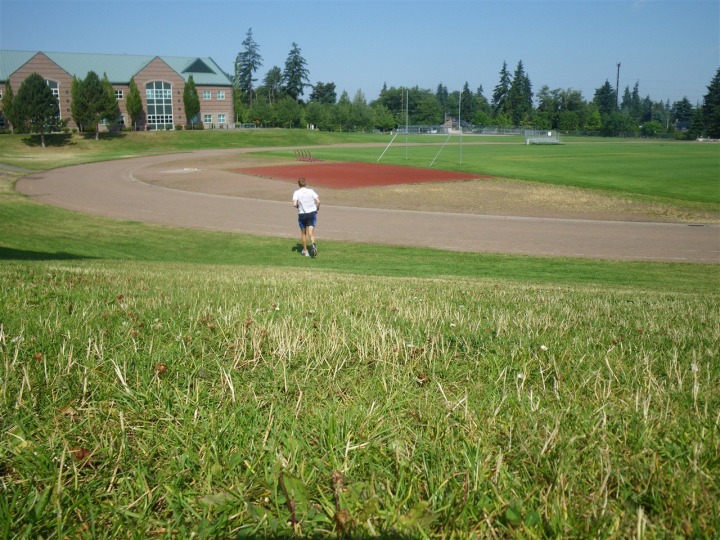 So I got about 15 minutes worth of pretty blue sky..every 20 seconds: 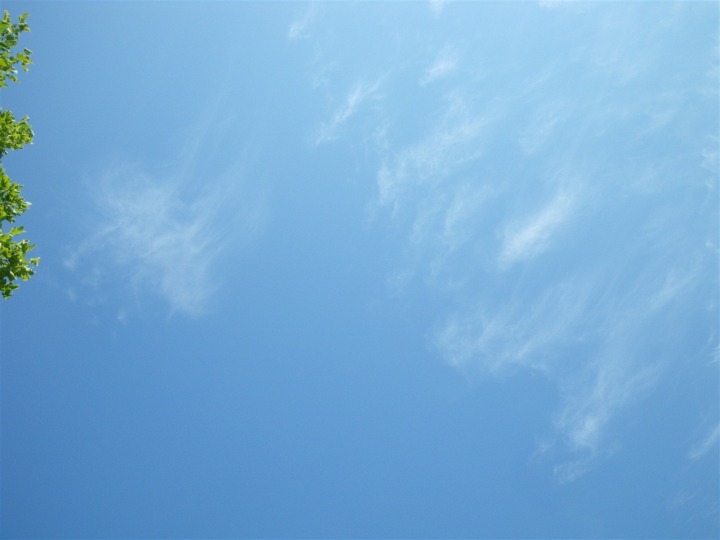 But eventually my Mom came along to see if I was still alive and took a few pics: 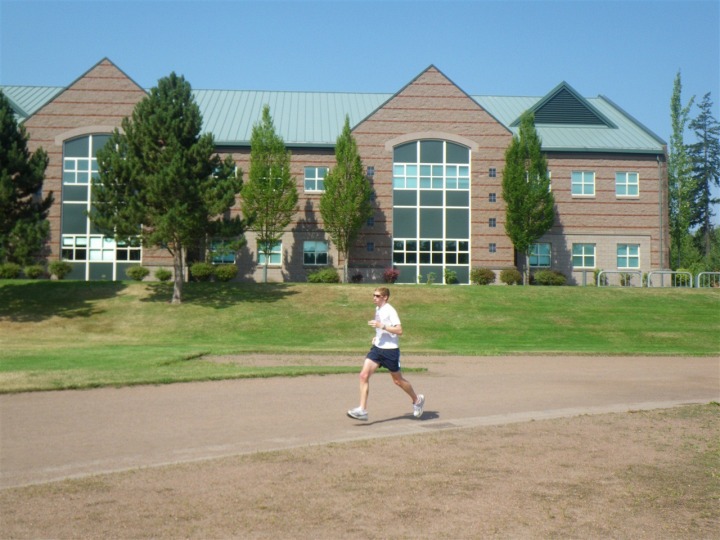 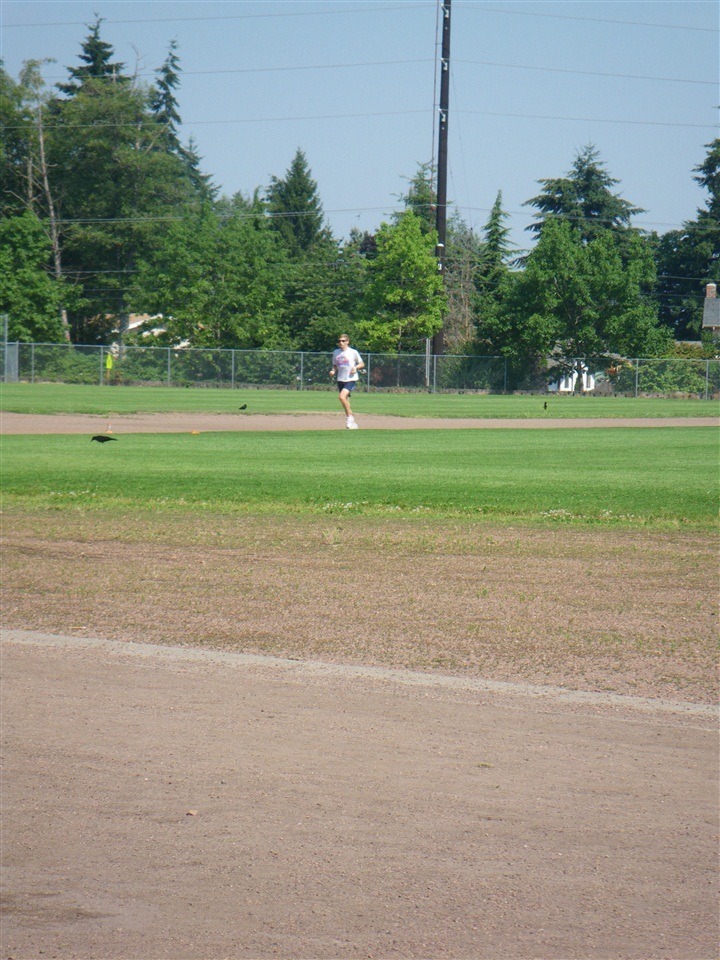 And after 7 miles of loop-de-loops, I was done.

Speaking of my Mom, later on last night we went out to the lake near the house and did a bit of open water swimming in preparation for her first tri in two weeks.  Just a nice half mile triangle – equal to the distance in her race. 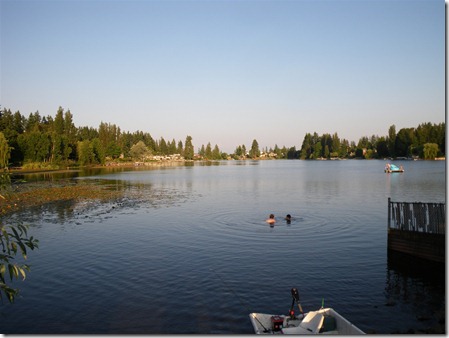 The above was with my Garmin 305 in my swim cap in a plastic baggie. 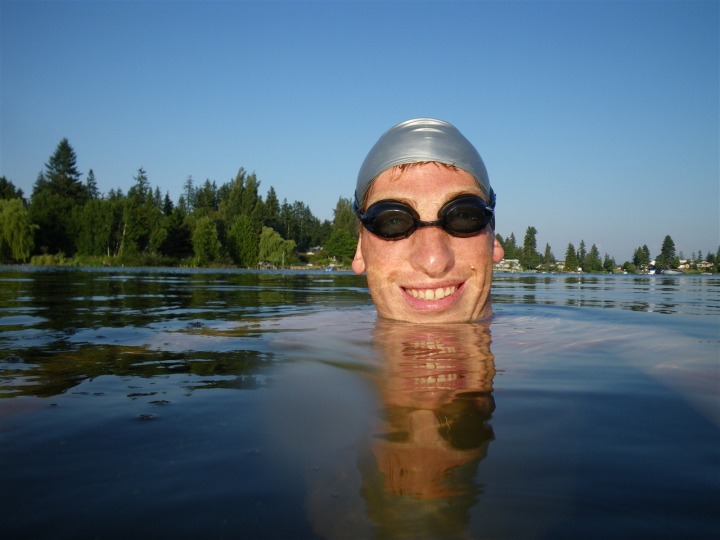 That’s her swimming below… 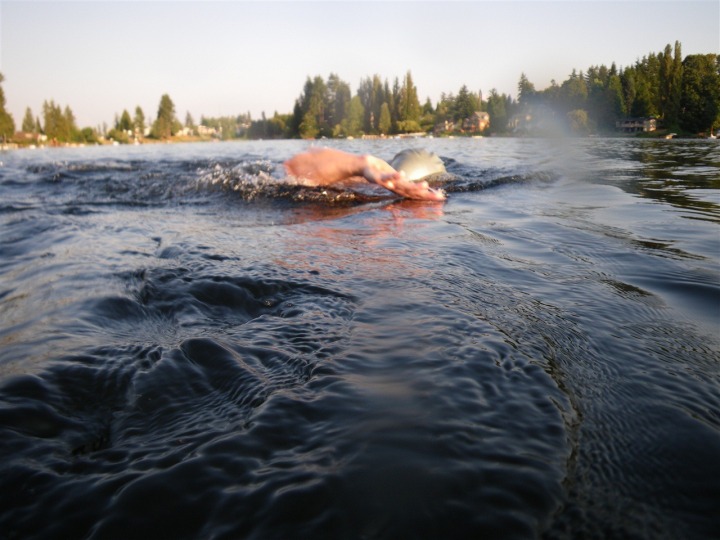 As we finished up our swim, one of the Boeing Dreamlifters (modified 747 that carries pieces of the 787 to assembly) cruised overhead, on final approach for Paine Field (where they build 747’s, 767’s, 777’s, and 787’s), just beyond the lake.  I noticed it as it made it’s slow turn around the lake towards final, so was able to snap off a few good pics. 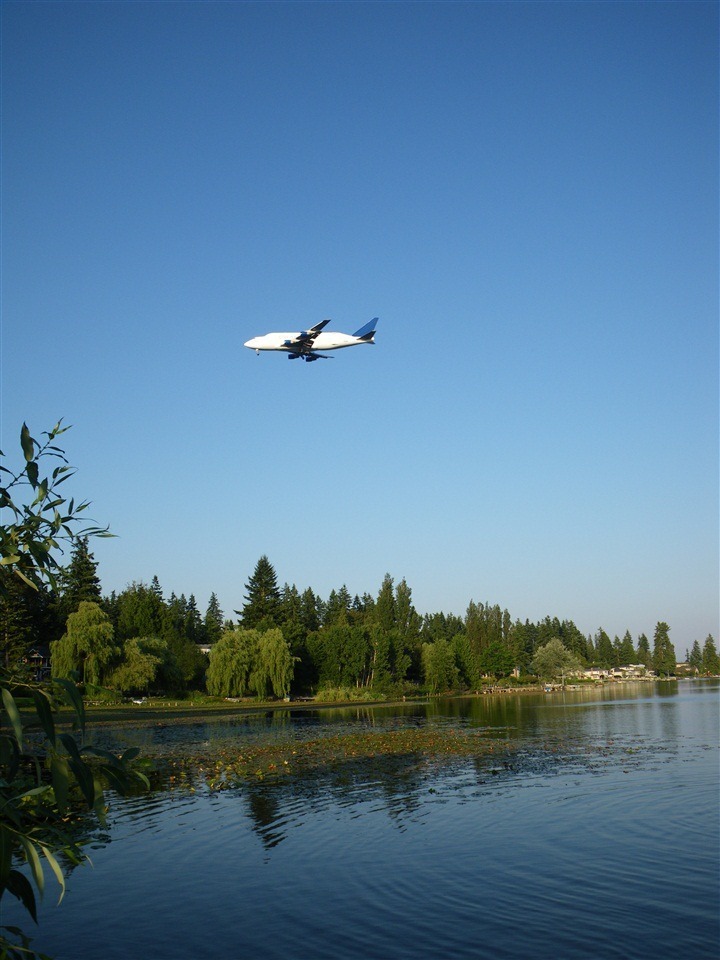 So, with that, I’m on the plane myself now, headed back to DC.  Though, that was nearly a non-occurrence due to some issues finding the pool this morning.  I set a new all-time SeaTac airport PR for arrival, at 28 minutes prior to my flight…in a different terminal…with a rental car…at rush hour on a Friday morning.  My all-time best ever is JFK at 16 minutes prior to flight.  All times are from the point of vehicular drop-off at the airport.  There was a LOT of very fast running involved.  Would have loved to have my HRM on this morning.