It’s getting hot (in) here…perhaps my new bike shorts has contributed to the record temperatures here in Seattle.  Either way, it hasn’t stopped my training.  Though this is a recovery week (well timed to a travel week), I’ve been busy with all the usual activities, swimming, biking, running and going to baseball games.

Monday brought a nice little trainer ride on little red.  Well, technically the bike is also red (the Fuji Newest I keep here in Seattle), but the little trainer I have is little red.  The only problem with little red, is that sometime it doesn’t quite put out (it was cheap).  I’ve found that its practical limit is about 250-275w.  Though I don’t have a power meter to test that, that’s kinda what I’m guessing based on knowing my HR’s at various cadences and what it takes to get there.  So I have to get a bit tricky with my cadences to stay up in zone on some of my workouts.

As you can see, my speeds were kinda jumping all over the place as I worked to nail down some of the shifting to keep in various zones.  No worries though, I got the job done.  Given how rarely I use little red (a couple of times every few months), it works out just fine.

Anyway…the more exciting was the baseball game on Monday night.  My Dad and I decided to hit up the Mariners game (the baseball team I normally root for…sorry Nationals).  It as just a quick ride from both where he and I were working downtown, to the game.  And, given Seattle just opened the light rail two weeks ago – we decided to take that to the game. 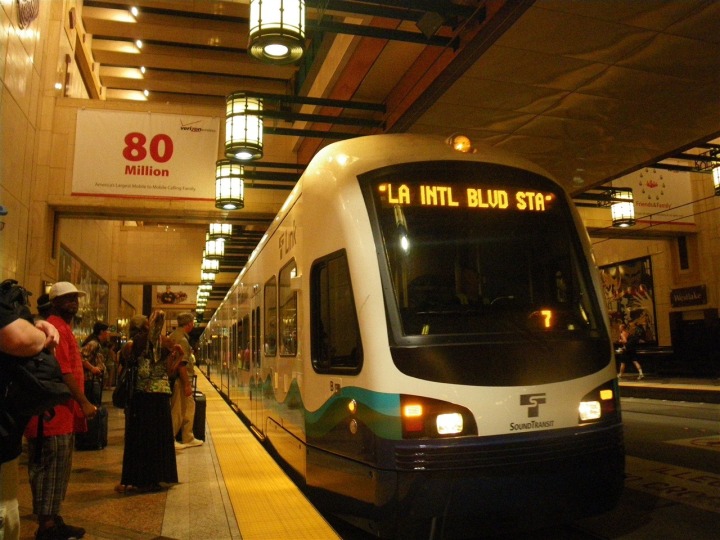 It’s pretty functional, though a bit slower at rush hour than later on when we returned from the game.  That said not a bad deal and a good start, it’ll certainly be a lot nicer once expansion completes.  Anyway…we got off at the Stadium station and walked the short distance to the ball park. 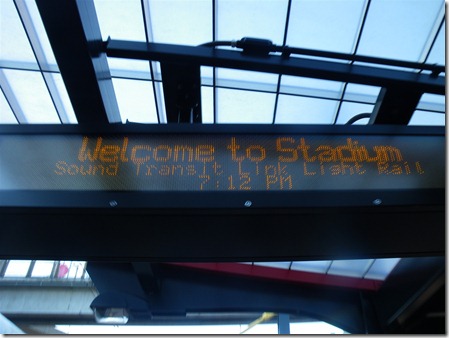 Once there we had to go visit grandpa.  Back a decade ago when the stadium was first built they offered the ability for folks to buy bricks in the stadium.  My grandpa was a massive baseball fan (though, naturally a Red Sox fan given he grew up in Rhode Island).  So we got him a brick in the stadium.  Now, the brick has a view of the bullpen, but on a more funny note, it actually sits right at the entrance to the women’s bathroom.  So watch your step there little women’s! 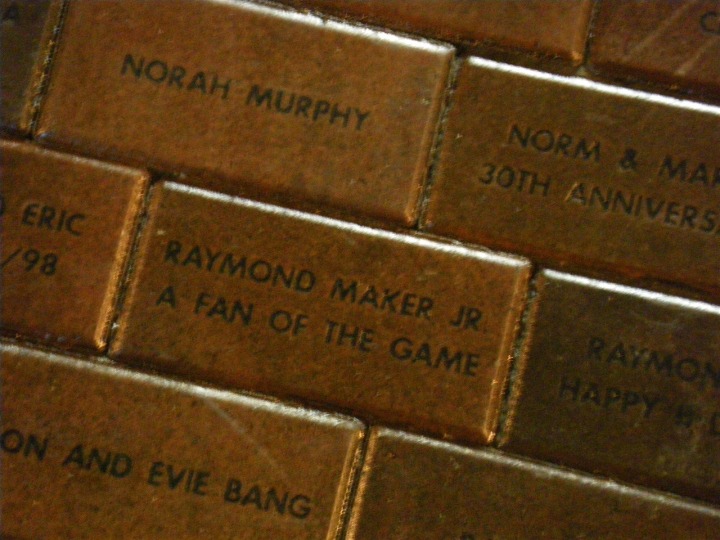 (For those curious, my middle name is different, so no numeric’s after me…)

Oh, we picked up some super cheap bleacher seats (and peanuts) and just enjoyed the really nice night in Seattle.  Here’s a few pics of the game: 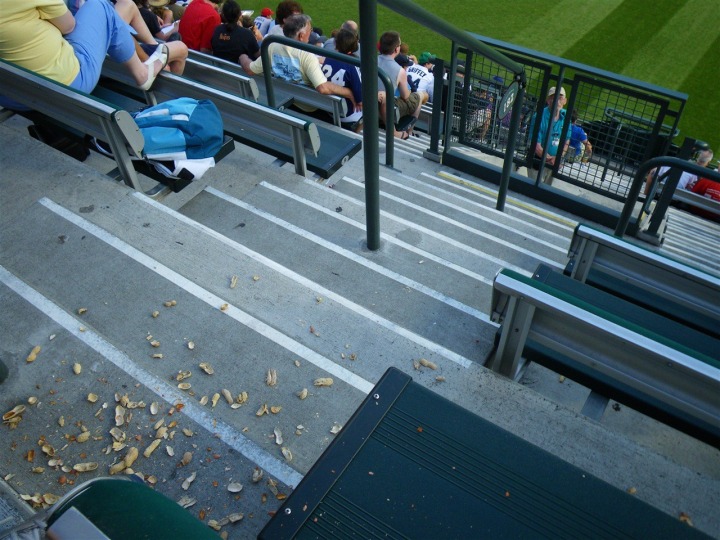 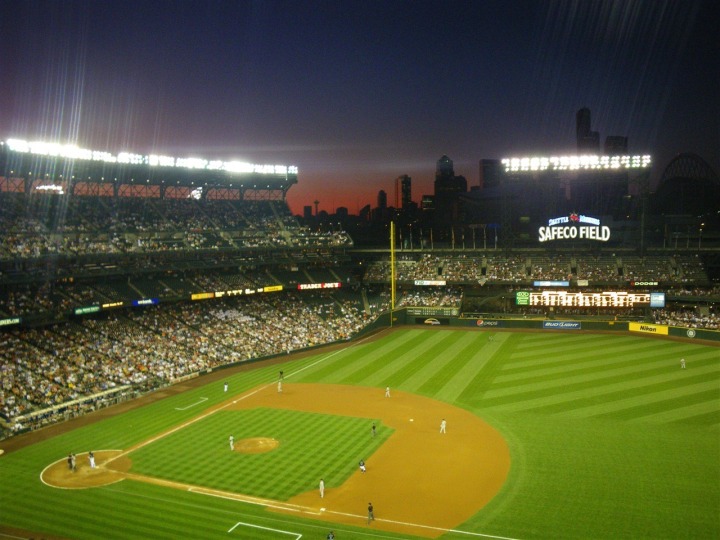 The game was against the Toronto Blue Jay’s, and I’m relatively certain there were more Canadian fans than American ones there. 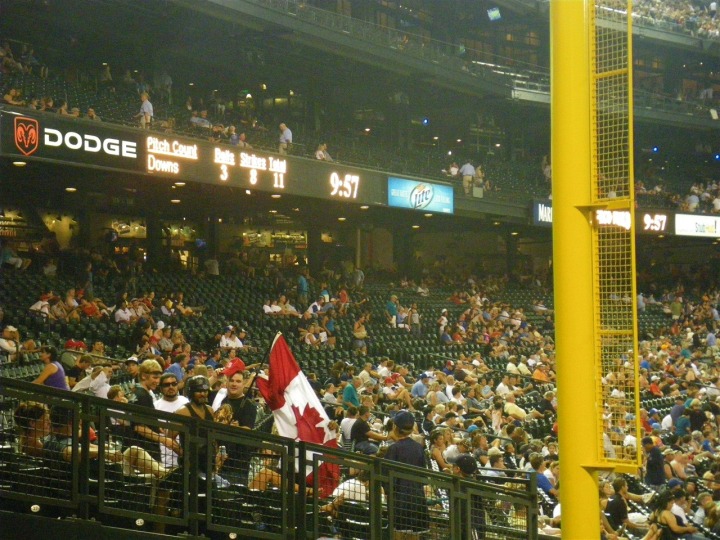 And the sunset was awesome.  You can see we moved around the stadium quite a bit…especially after we left a large contingent of peanut shells near our original seats.

All in all – good times at the ball park!

Tuesday morning brought some Forest Gump running time.  In place of a usual 2h30m minute run, I had a bit more entertainment in the form of a three-part run:

Now, I’m never really sure what this will net me distance wise, so I try and do out and back segments for each chunk.  I decided to start from the waterfront near the piers, and then head up north a bit following one of the major bike/running trails in Seattle, and then head inland. 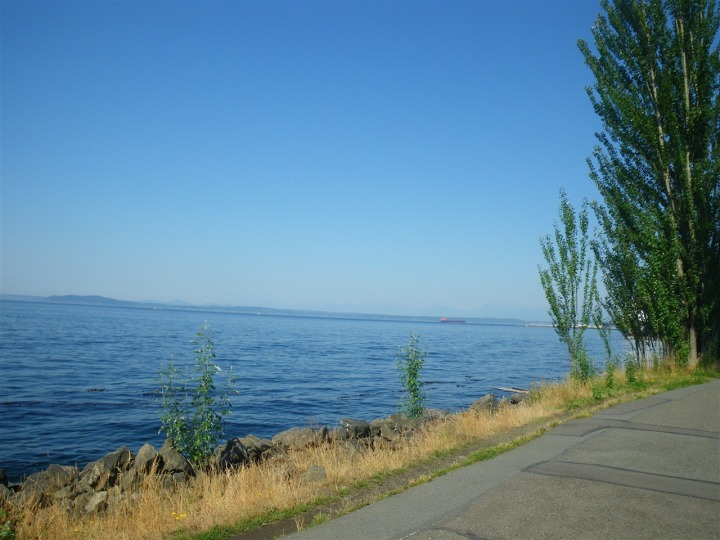 It’s amazing how much hotter it became once you headed away from the water and went inland.  As I ran through a rail yard, the temps immediately became hot as all heck. 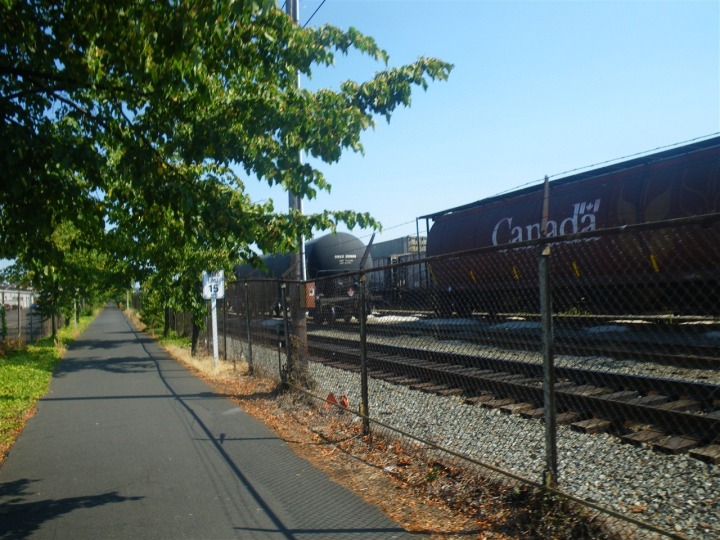 Oh, see the train?  Yes, the Canadians are invading.  I’m sure of it after last night’s ball game.

After deciding I was tired of the rail yard heat, I headed back towards the water. 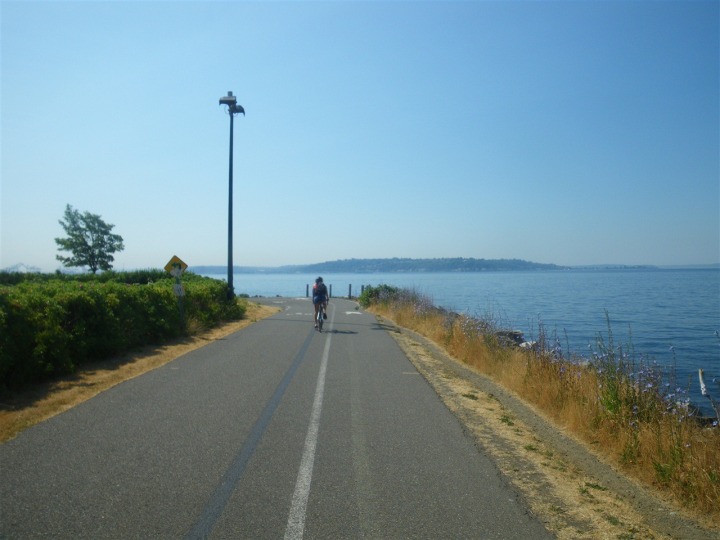 It’s incredible how much cooler it was, almost ‘cold’ actually.  This despite the fact that the temperatures were climbing into the low to mid 90’s (cold compared to today’s 100*+ temps).

Along the water, I swung by one of the fishing piers: 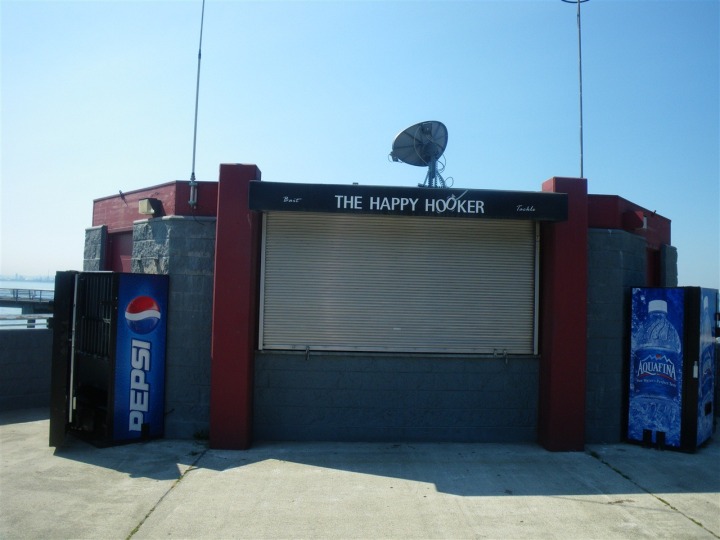 And then continued back towards all the major piers along the waterfront: 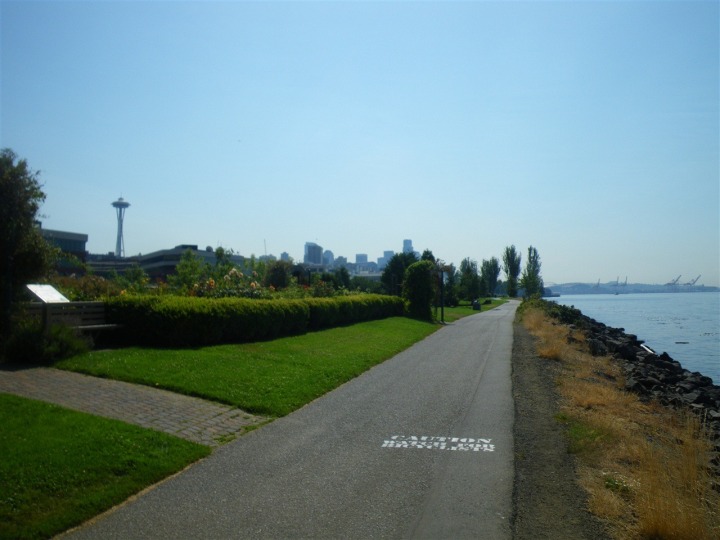 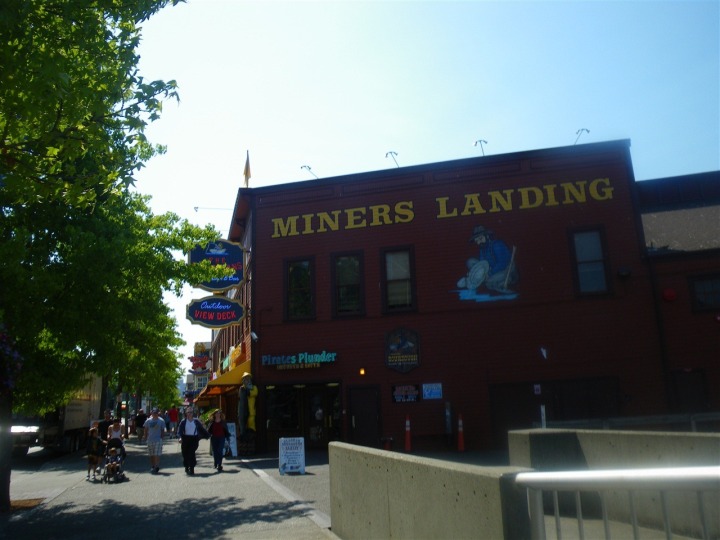 Here’s the view using Bing Maps – my route is the blue line in both pics (check out my full route here): 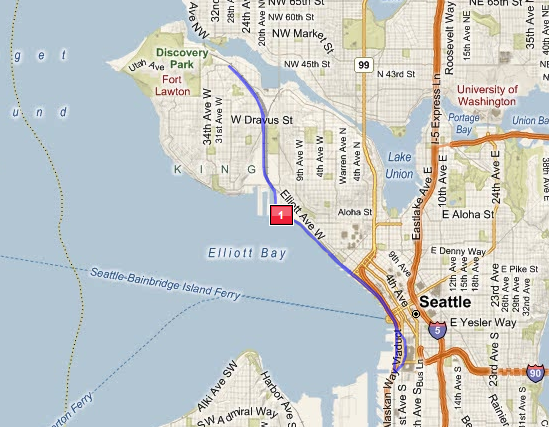 As you can see, I passed by the ferry boats, and then kept on chugging south along the waterfront past the Coast Guard base, where one of the Polar Ice Breakers was chillin’. 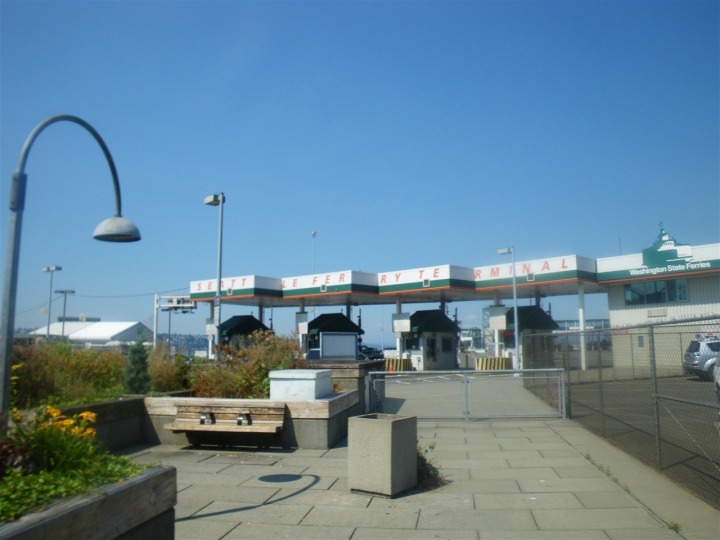 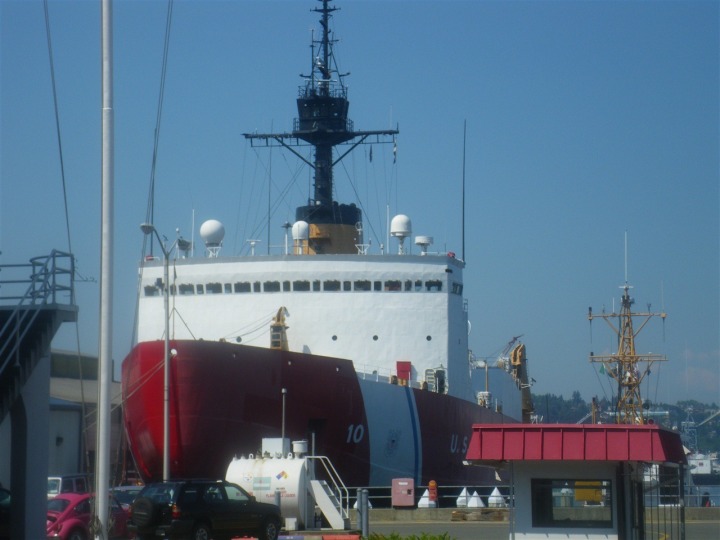 After that I hung a left and went to go visit Safeco Field (baseball stadium): 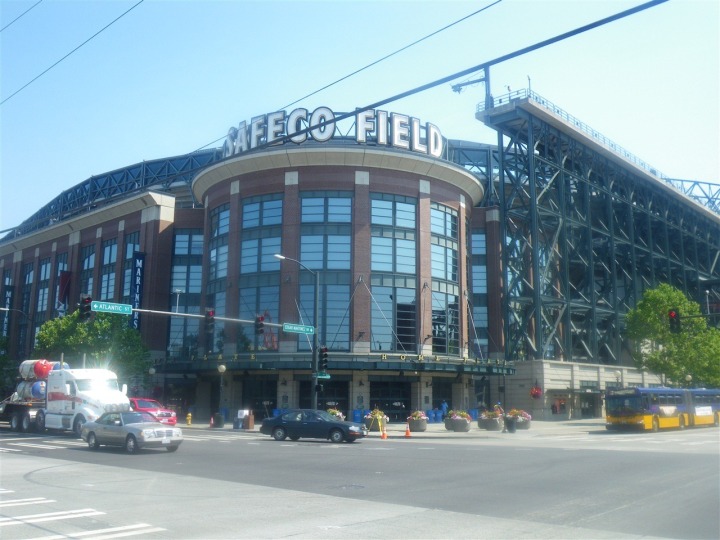 Which was immediately followed by Quest Field – the football and soccer stadium: 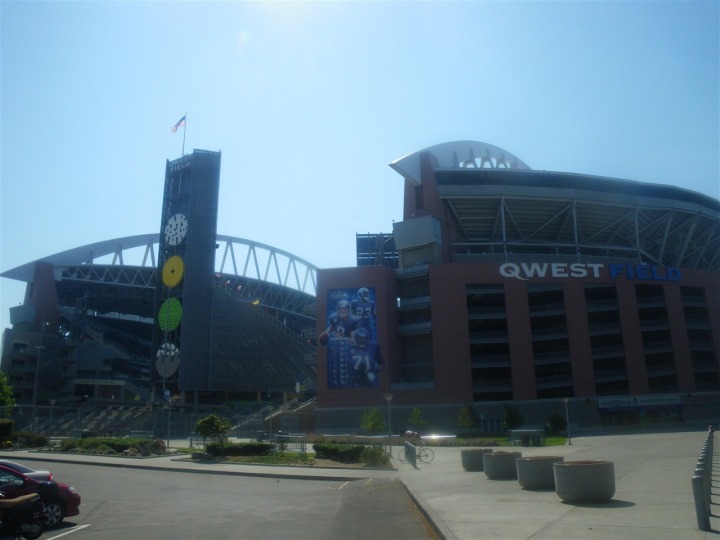 Finally, I went back over to the waterfront to run along the old trolley lines back up to my car.  Speaking of cars, one thing that sucks with rental cars is the keys are massive (so you can’t lose them), and they don’t fit in my running shorts, so I have to hold them. 🙁 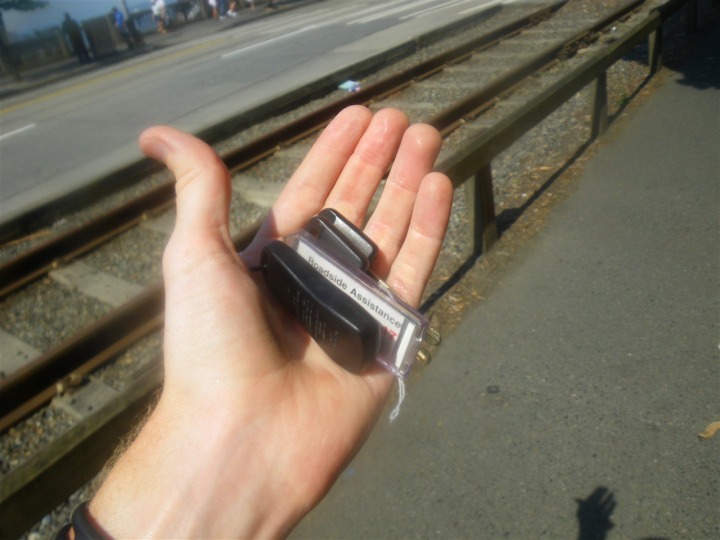 Later on I swung by the 24-hour fitness on my Mom’s guest pass to knock out a 3,000 or so yard swim, plus give my mom a few little pointers on her swim.  Her swim is coming along quite nicely – she has nothing to worry about for her first tri in a few weeks.

Well…except perhaps changing a flat.  But practice will make perfect. 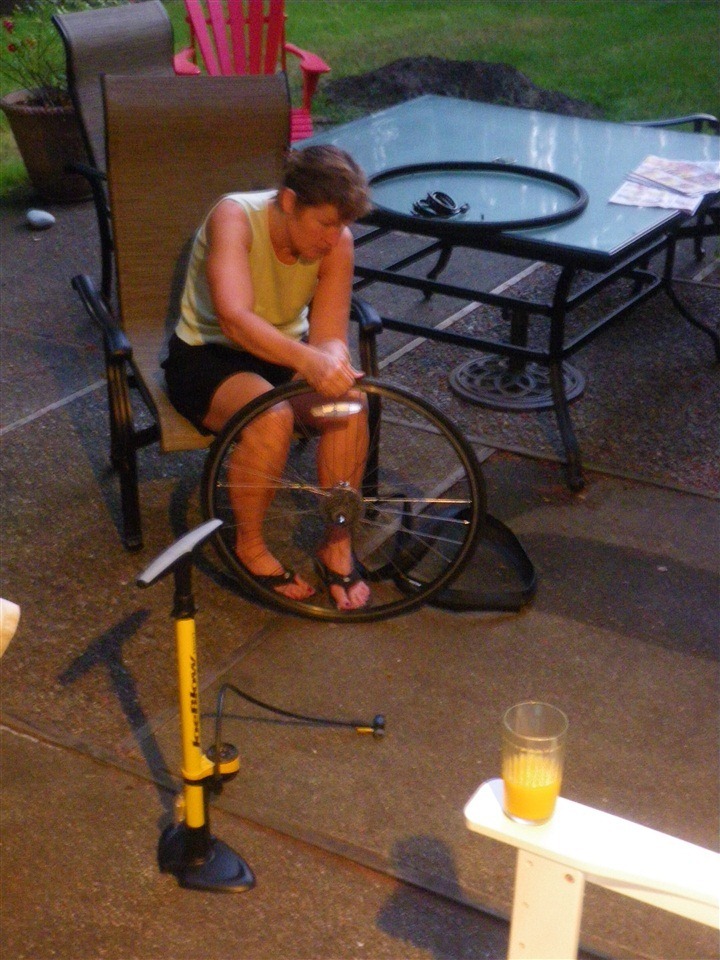 We had a family flat changing fiesta last night to go over the basics.  Good times.

Oh, I leave you with this place I saw yesterday morning in Seattle. 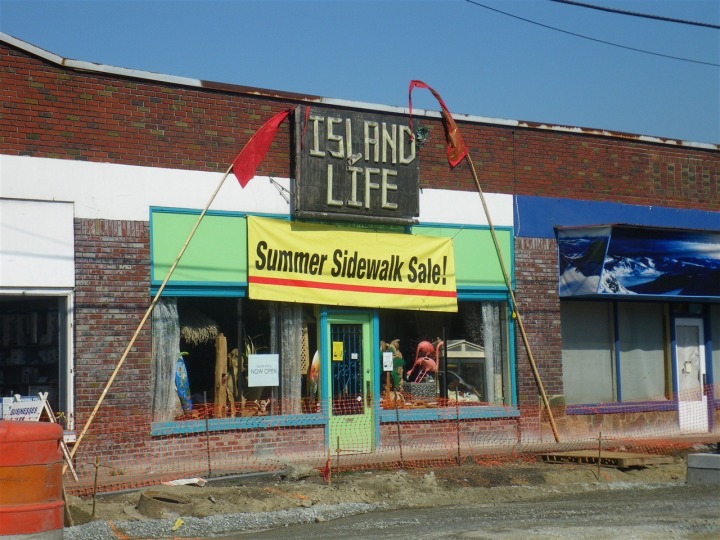 If you put up a ‘Sidewalk Sale’ sign out front, you better be darn sure you mean it – otherwise someone just might just take you up on your offer…and remove your sidewalk.