I think this marked the beginning of the ‘busy season’, which officially goes from now until mid-November.  Sorta like opening day in major league baseball – only much less relaxing.

I honestly don’t remember what happened Thursday or Friday, so we’ll start with Saturday.

First off, ‘mother nature’ decided it would be ‘fun’ to throw a random curveball-esqe 91*F day into the weekend mix.  Now up till this point my winter had been a nice mix of everything below 70*F (occasionally below zero).  And so now, just for fun, we went from nice cool days to something approaching triple-digits.

Of course, the only logical thing to do then is to go to the market in DC to see out food – Eastern Market.  So the girl and I headed into the city in the morning and picked up a slew of items for dinner later that night. 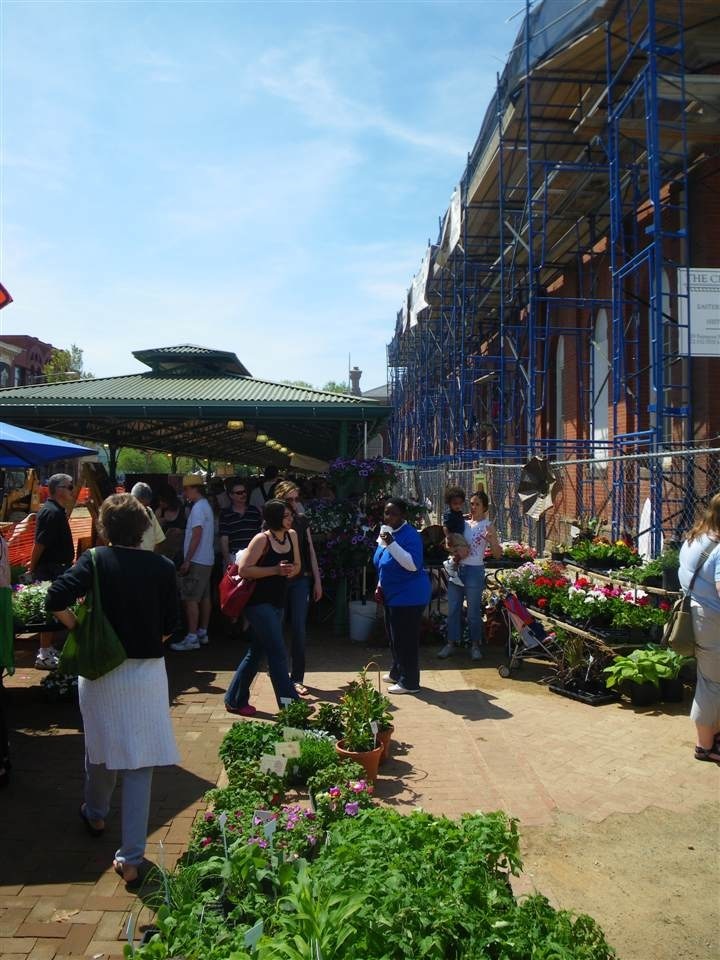 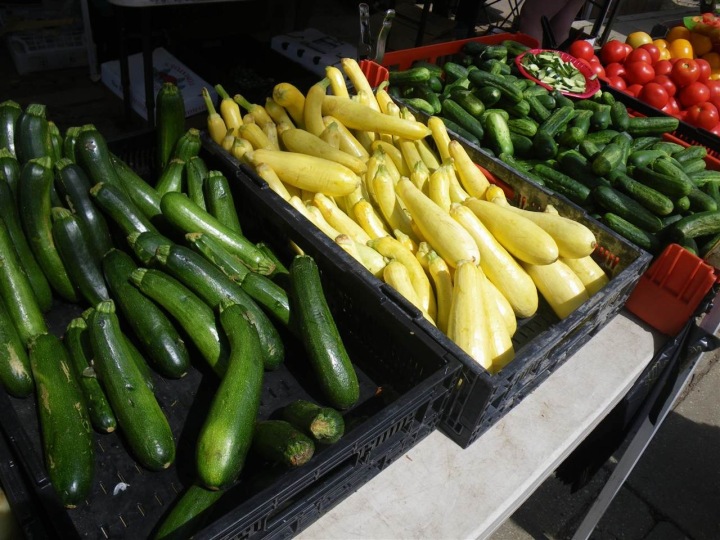 We got some semi-local organic chicken, and a bunch of fresh fruits and veggies to later toss on the grill.  Now, the real reason to go to the market wasn’t because I actually wanted food.  Nope, it was because I wanted to check out a used bike dealer that I had heard about a few weeks prior. 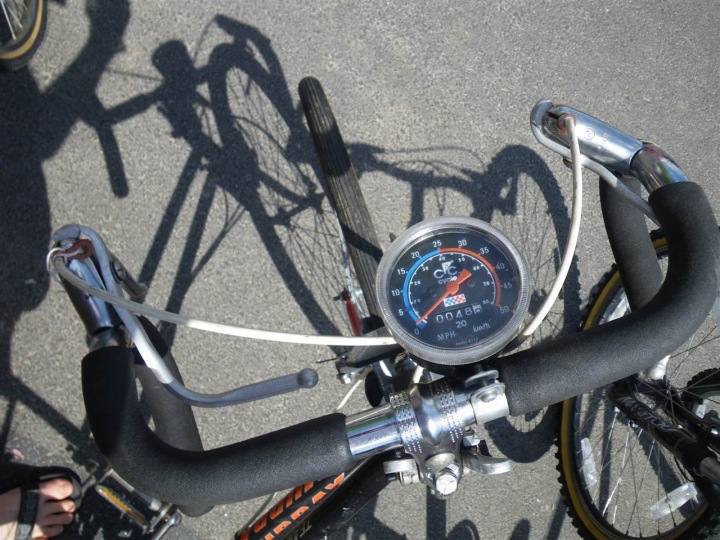 But, upon actually checking out the selection (very diverse), it was WAAAY overpriced compared to Craigslist…or even Wal-Mart for that matter.  So I skipped on any purchases.  I’m just looking for a nondescript commuter bike to get around Old Town in the summer (to the pool mostly).  I used my mountain bike last year, but I could dramatically improve my ground speeds with a road bike.  So anyway…no bike for you, or rather…me.

Next up was a nice little ride.  The coach had this originally scheduled for Sunday, but with trying to pack (more on that later), I pleaded to move it to Saturday.  He decided he wouldn’t make a decision until Friday (after 4 days of bike/swims post Boston).  My Thursday bike looked surprisingly good given Boston just three days prior (actually, it looked better than normal wattage wise…go figure), so I got the go-ahead for a Saturday cycle.

This means a theoretically casual 3-hour tour in aero on the tri-bike, or roughly 60 miles.  In reality, with the 90F+ temps, it turned into a three hour slogfest. 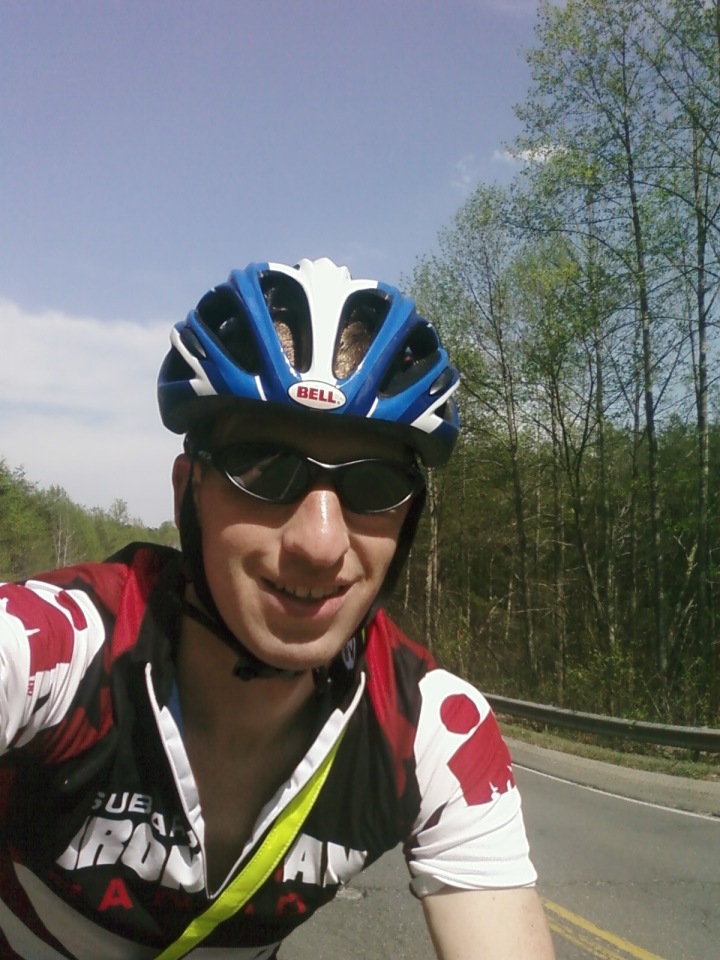 (Sporting for the first time I believe, my Ironman Canada bike jersey)

Despite taking significant precautions in the morning to over-hydrate a bit, by the 60 minute marker I was already feeling a little run down.  And my speed was ever so slowly declining.

It’s not that I wasn’t hydrating, cause I was.  I had taken with me on the bike 4x28oz water/nutrition bottles, and I was taking in liquid every 10 minutes per normal schedule.  But that wasn’t anywhere near enough.  By the end of the day (not even post-ride, but post-hydration and post-all-day eating), I would be down nearly 4 pounds.  Doh…fail.

There were points I was just gliding along until my bike would almost stop and then I’d peddle again.  No…seriously, I saw a number of low-single-digit numbers gliding on the flats.  Oh well, bad rides happen.  A redefined nutrition strategy should alleviate this for Thursday’s upcoming 3.5 hour ride into the desert.

However, the only recovery drink option post-ride I could find was a 1.5L container of Chocolate Milk…nuttin’ smaller. This = pure awesomeness.  And yes, that’s my bike in the backseat. 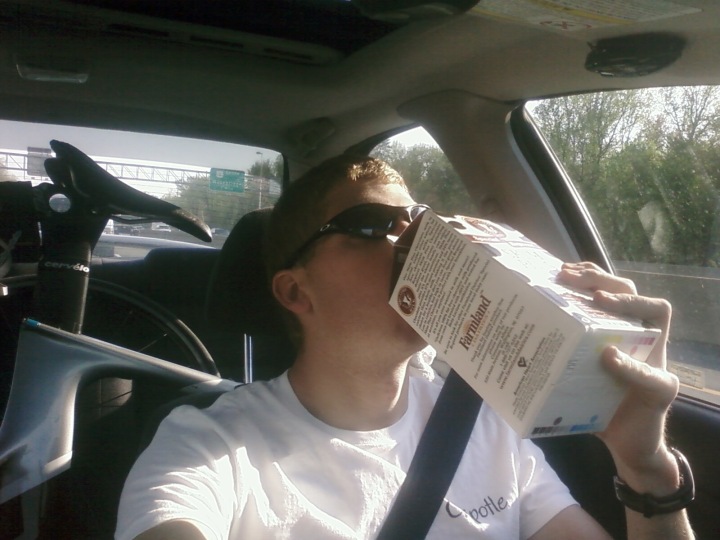 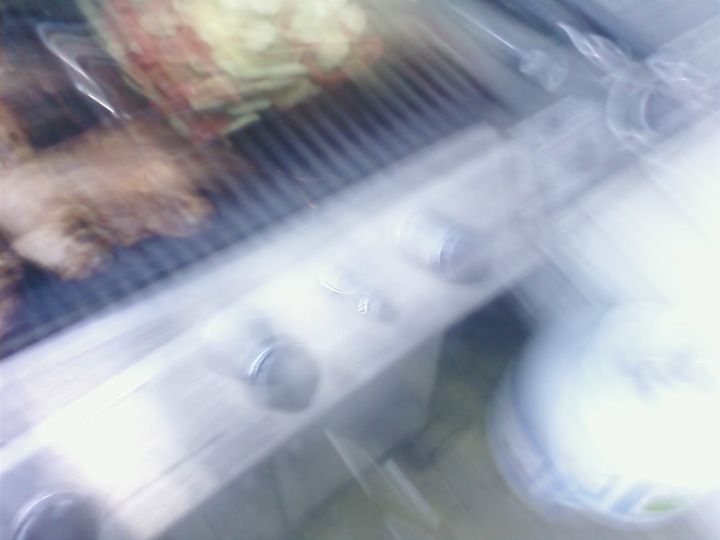 I only had one thing to do today.  Well, actually two.  First, I dropped the girl off early at the GW Parkway 10-Miler Race, and then I went off for a nice casual 40 minute run.  This run, like the day before – was another slow slog through the heat.  Except, being only 40 minutes it wasn’t too bad.  Just not too fast.  That’s fine though, it was the first run since Boston and all in zone (despite the heat slowly climbing back up to 91*F).

Post ride, I hopped on my mountain bike and bumbled along the course to the 6-mile marker, and then eventually the 8-Mile marker.  I saw a number of folks out there, including local Pacer friends, blog peeps, and peeps who read my blog (and then yell my name).  Hi!

Here’s some random pics along the way of both the 10M and the 5K events. 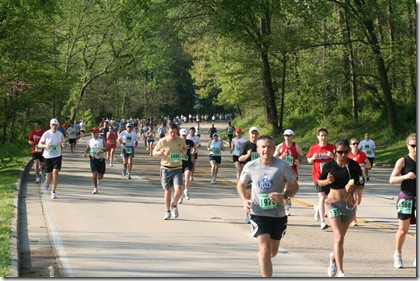 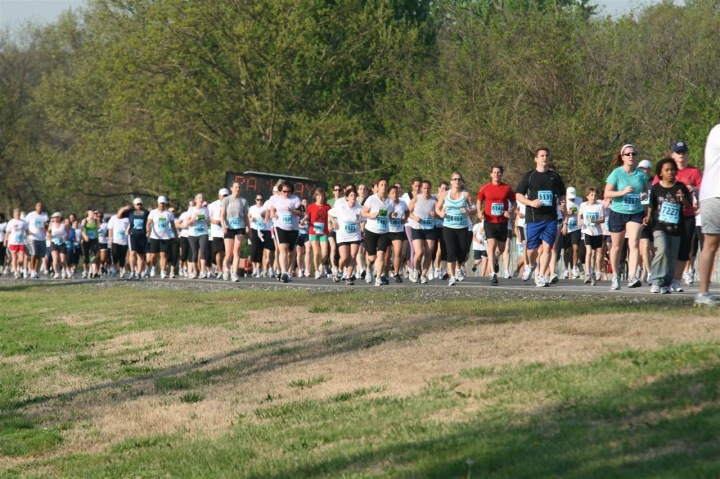 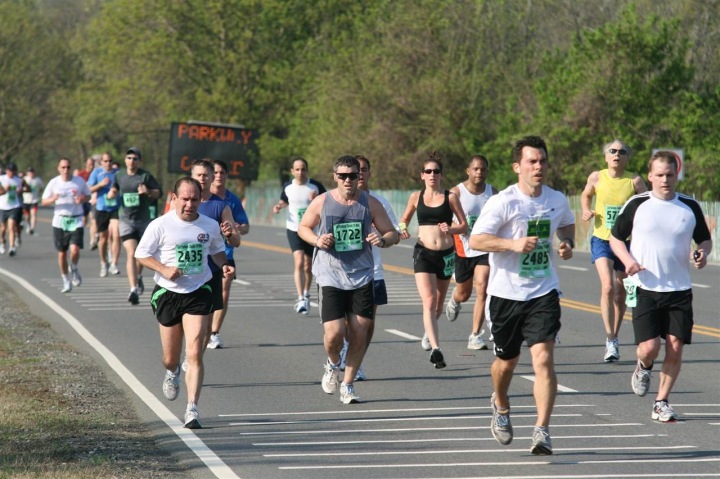 Finally, post-race I packed up my bike (for the second time in as many weeks).  Once again it was looking like an animal carcass hanging out of a tree. 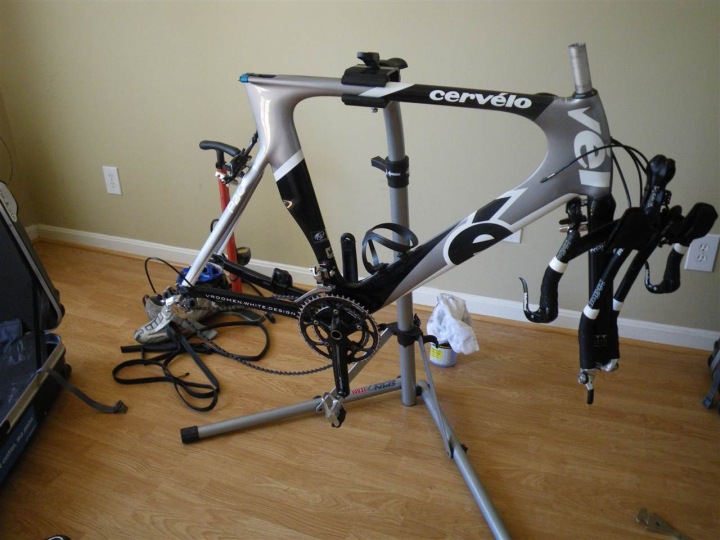 So where am I off to?  Well…a TON of places.  I’ll be on an airplane about every 7 days.  The next 4 weeks has me visiting three continents (five countries) and one island chain…all for work, minus one little weekend side trip.  More on that as it happens.  These trips were somewhat planned, so my training schedule was already adapted to it. 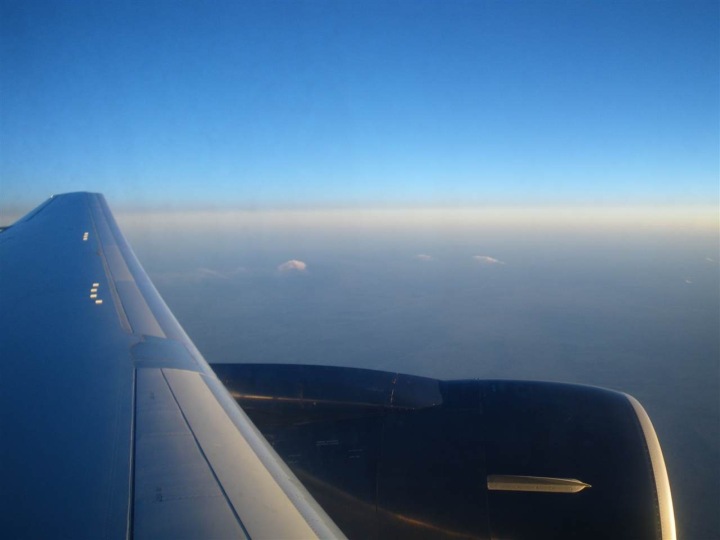 (Somewhere between Washington Dulles…and San Francisco, on the way to Vegas)

But because the bike is so much of a focus for this year, the bike is coming along on the first leg of the journey – Vegas – so I can spend some serious time with it.  Thankfully United decided to not charge me the bike fee this evening (perhaps in a nod to the $4,000 in airline tickets I bought on Friday with them…).  And shipping it back via Fedex Ground is my new cheap way to get it back for under $50.

I’m speaking at a conference here (a whopping 7 sessions in four days), but the good news is that my schedule is broken up enough I’ll be able to get a nice long ride in Thursday, and then get to play (read: short ride) on Tuesday as well on the bike for a fair bit.  I’m looking at going to Red Rock Canyon for the Tuesday ride (looks looped and perfect), but I’m open to any Vegas peoples suggestions for a nice 60-70 mile ride for Thursday. I’m looking for something starting relatively close to the city (I’ll have a rental car), but a route that would be nice and quiet into the middle of nowhere.  Rolling, mountains, or large hills would be preferred.

PS (as I look at my camera’s photos) – quick side note.  Remember the running sign I saw in Boston?  Well, thanks to eBay I was able to get my own for only $9.  Arrived on Thursday, authentic and posted in this years race! 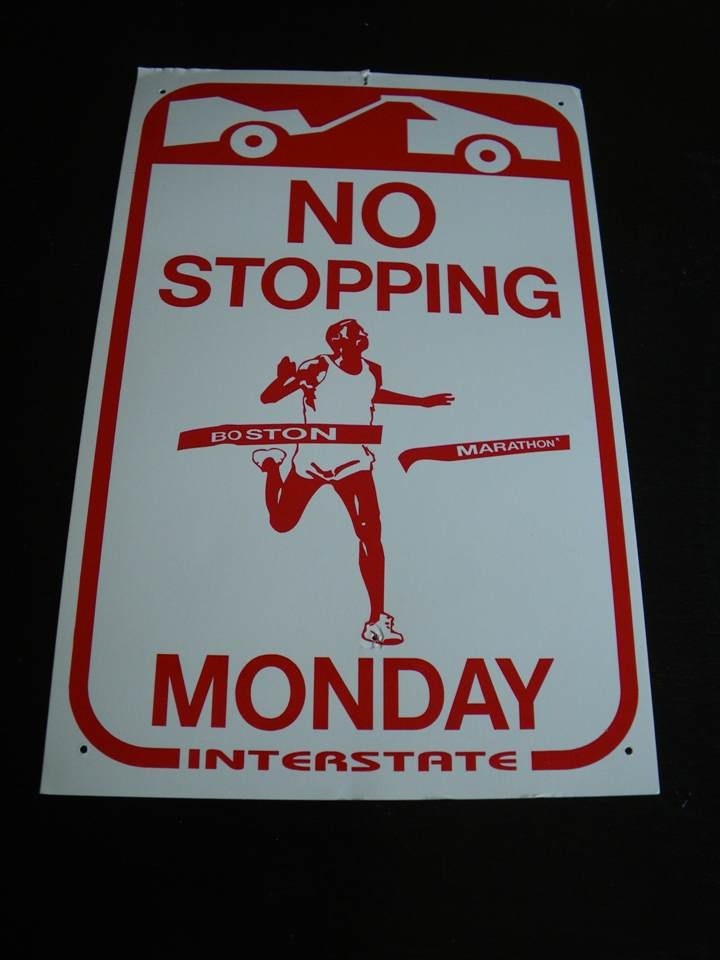 PPS – While at the airport this evening I saw the cast of “The Unit” (a TV show), catching an international flight on what appeared to be another USO tour. 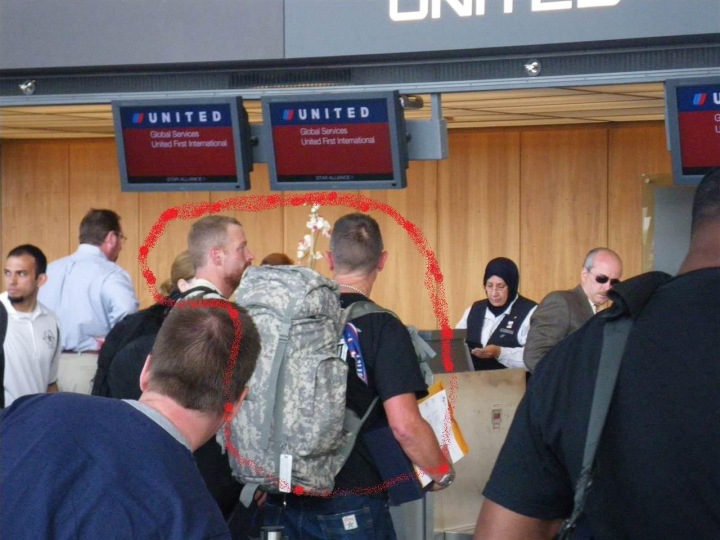 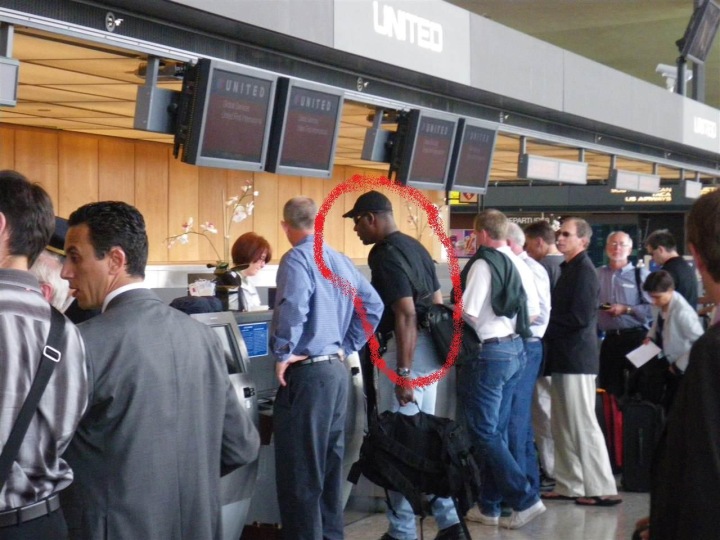