How a long bike ride should be

Over the last few weeks I’ve been kinda bummed about some of my long rides. While I was getting in the distance – my performance wasn’t exactly where I wanted it (or needed it to be). Some of it can be attributed to the horrid conditions, but then some of it is simply because my bike normally falls on Sunday (and on Saturdays I normally: Run 20 miles, Bike an hour, Swim 3,500+). So by time Sunday comes along my legs are in a state of mild-protest, and my desire to sit in the saddle for hours on end wanes. Plus, cycling isn’t exactly my favorite sport.

But today this was different. WAY different. For starters – it’s Saturday. I have a running race Sunday, so we moved the long bike/brick to today. Secondly, the weather was incredible. Third, I got both a new (and better) pair of cycling shorts, as well as completing changed my nutrition plan. Also, I had an exciting route in store. So I was actually somewhat excited for once for my long ride.

After filling my first round of bottles with eLoad I headed off…to Starbucks to grab a breakfast sandwich and Grande Java Chip. 🙂 What?!? You think I’m going to ride 80+ miles on an empty stomach? I had been using Heed as my drink of choice for the last year. But I wanted to experiment a bit, in particular with higher sodium drinks. Calorie wise Heed & eLoad are the same. But eLoad has over 370mg of Sodium (in comparison to 60mg with Heed). I put two packets per 24oz bottle, and loaded two bottles up. That should last the first 90-120 minutes. After that, 7-11 time.

I followed this route, which starts at a park near Greenbelt, and then heads to BWI airport and then to Annapolis, and finally back to Greenbelt. All on ‘rolling and forgotten country roads’. Sounded perfect.

I will apologize now for any slightly blurry, or less than ideal photos. I took everything while ‘underway’, and didn’t generally stop to take pictures. So it’s kinda a point and shoot and hope for the best effort. 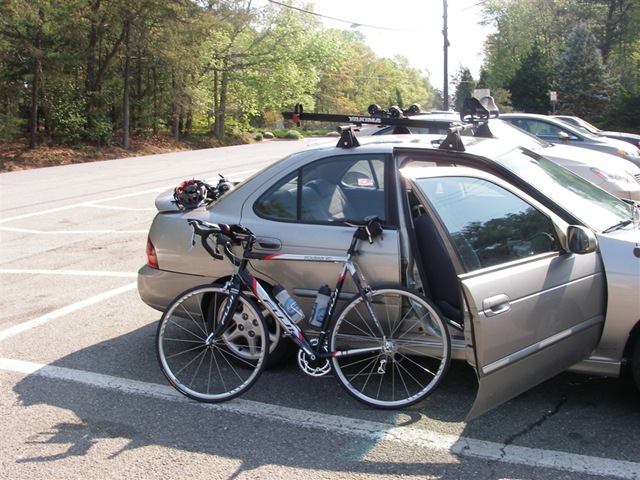 From there it was off for the first leg, to BWI. The route was awesome! Barely rolling but otherwise deserted roads. Passing country farms and friendly people abound. 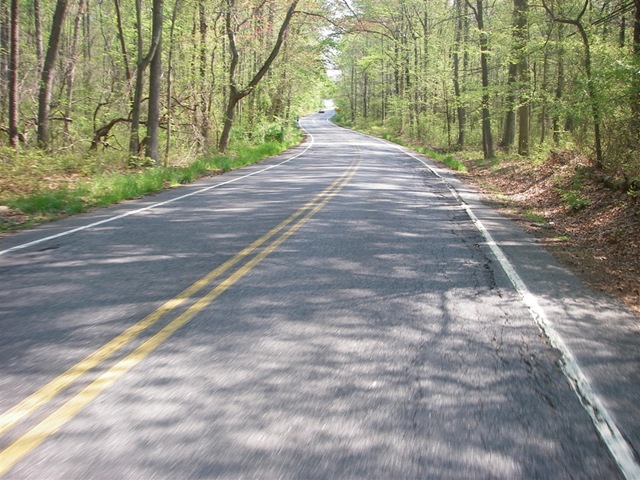 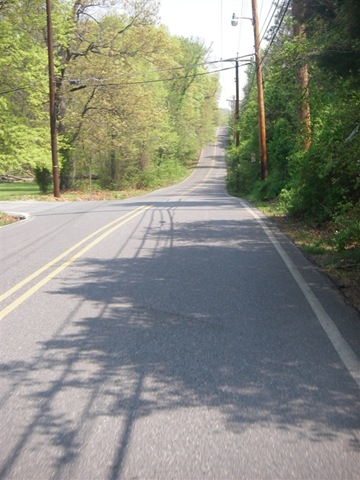 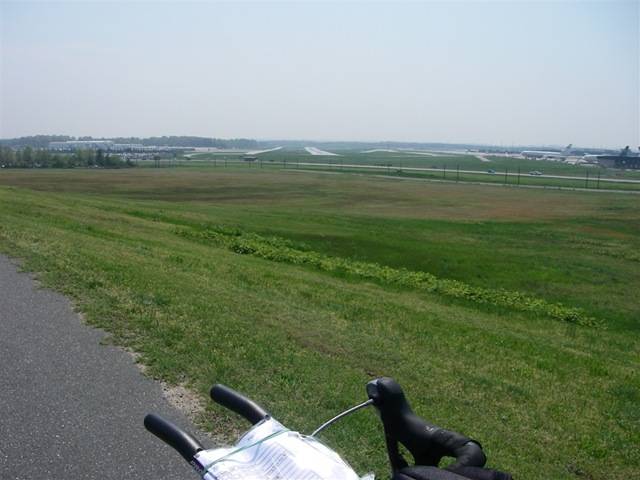 (Here’s the end of the first ‘segment’, passing BWI airport. Those are the runways there, and airplanes to the right)

The first segment met up with a loop trail around BWI. It’s a great little path that’s not too overcrowded – and the people are friendly. It really helps to have friendly people out there.

Shortly after passing BWI I made my first 7-11 stop to pickup more liquid. A quick scan of the options had me choose Gatorade’s G2. I’ve never tried it before – but it was relatively high in sodium (270mg per 20oz). So I grabbed some and an extra bottle of water for my back pocket and headed off. This is one of the best parts about this route – there are TONS of little country markets and convenience stores tucked away to easily get more liquids.

At this point you follow the B&A (Baltimore and Annapolis) trail. It’s kinda like the W&OD trail, except less busy. And it’s a straight shot. Perfect. 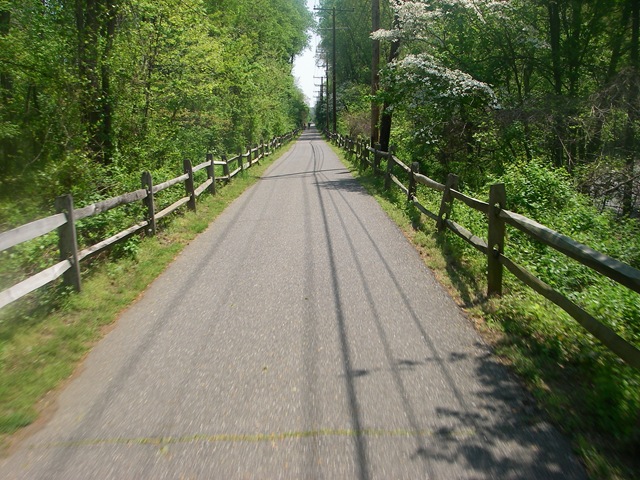 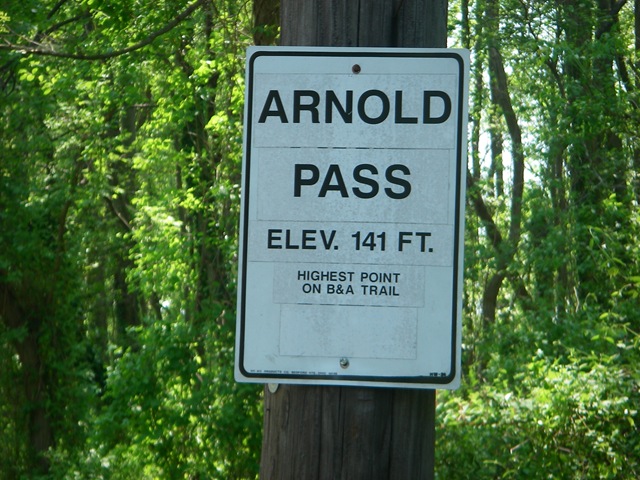 (I had to stop and take a photo of this, only in Maryland would they mark a ‘pass’ with an elevation of 141ft) 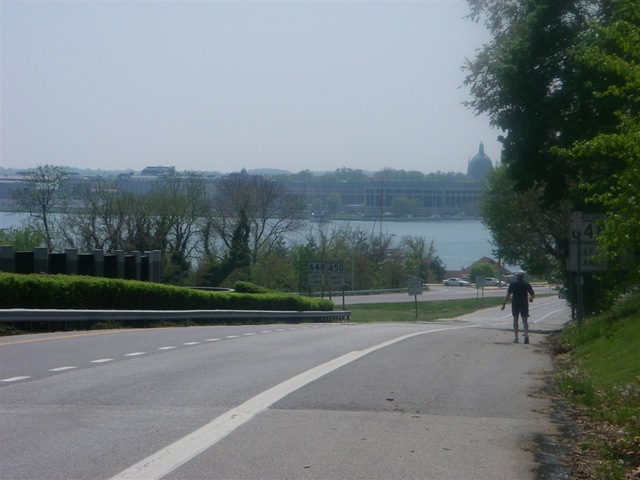 As I make the approach into Annapolis. The US Naval Academy off in the distance over the river. And a runner pushing through the heat and open sun. 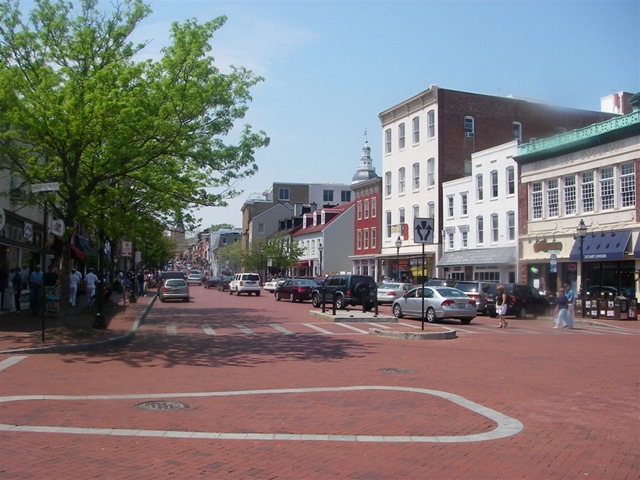 I successfully made it downtown. A bit of odd directions on the final approach, but at this point I knew how to navigate Annapolis anyway (just follow the tourists) – so just got down to the waterfront. I then had a couple of USNA midshipmen take my photo. Btw, random Rainmaker piece of trivia for you – I had actually planned to go to the US Naval Academy throughout most of high school, but ultimately decided against it. 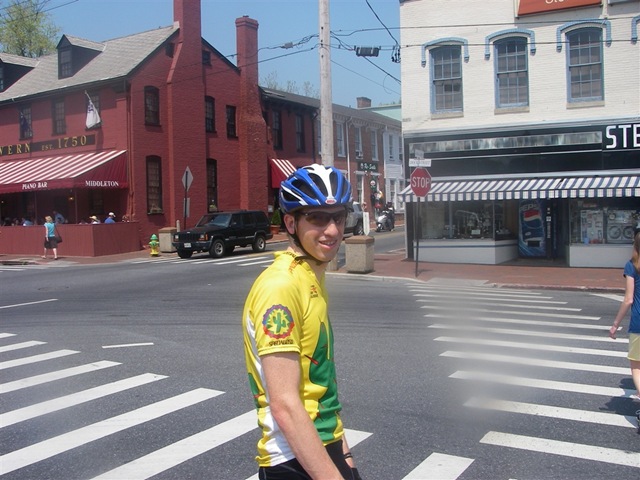 Just out of town, I made another stop to pick up more liquid (for those keeping track, we’re now at about 50 or so miles). Oh, and did I mention it’s now 84* with 80% humidity? Welcome to Spring!

So…two more bottles of G2 and another bottle of water. And a bag of Pop Tarts. Why Pop Tarts? See, my little hydration plan lacked any caloric considerations. Doh. It’s a work in progress. And the bag of Pop Tarts was on sale for 79 cents. 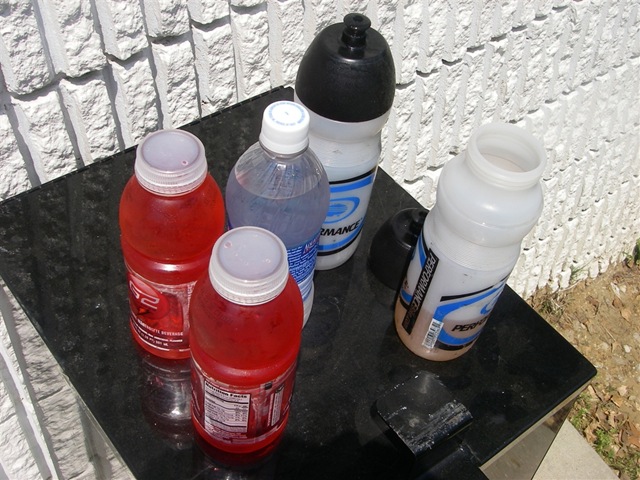 After that, more rolling hills, bays, farms and quiet roads. 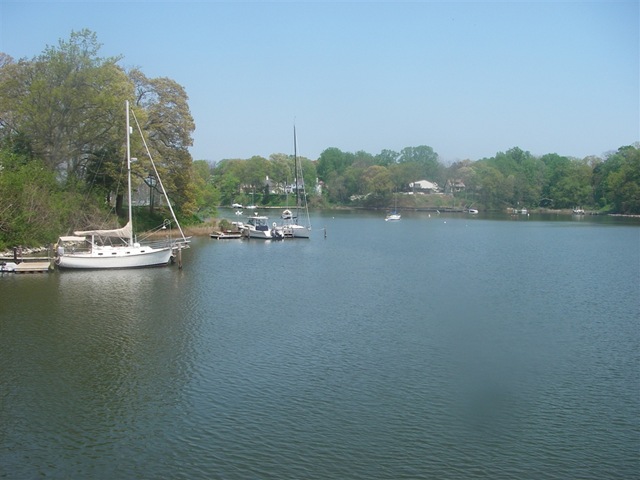 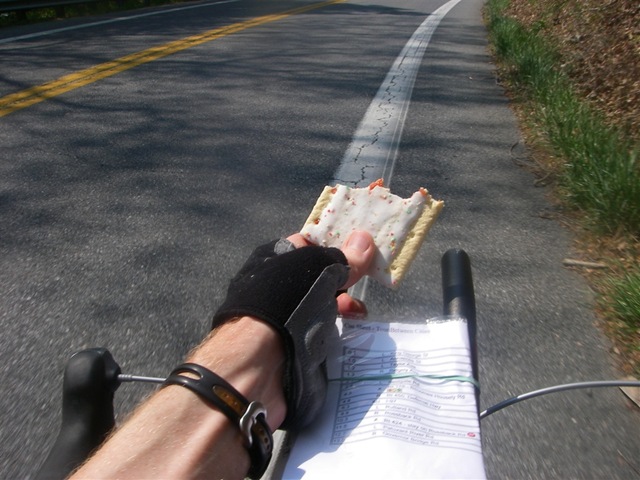 Yes, I posses mad Pop Tart skills. I can both eat a Pop Tart in the aero position and take a photo at the same time…all while going 20mph towards my destination. A small piece of said Pop Tart may have been lost during the filming of this scene. Darn bumps. 🙁 I almost went back for it…almost.

Oh wait… I did. Because as I was enjoying my pop tart, I missed a turnoff by a mile. Backtrack… (although I did leave my piece of tart for the birds). 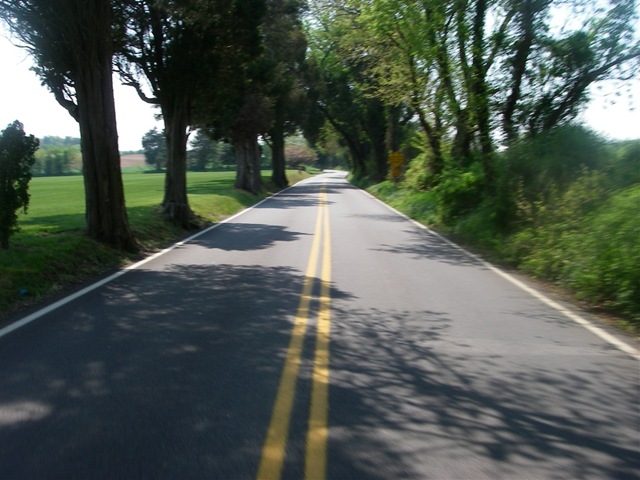 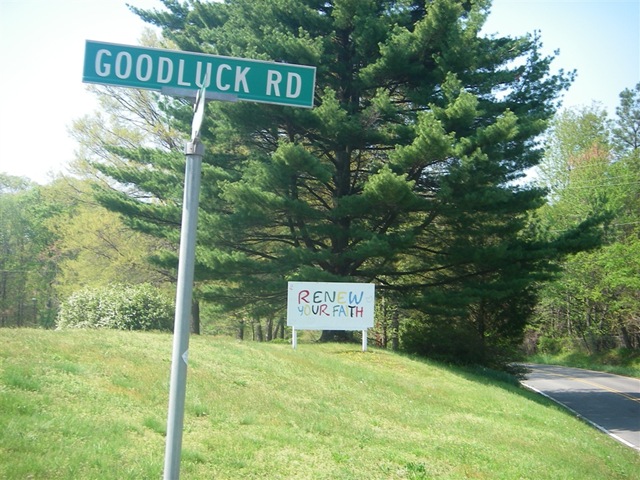 I had to stop and take a photo of this combo. A street called “Goodluck Road”, combined with a sign in front of a church that said “Renew your faith”. If either of those fail you, then just simply go to the “Y Worry” farm instead (below). 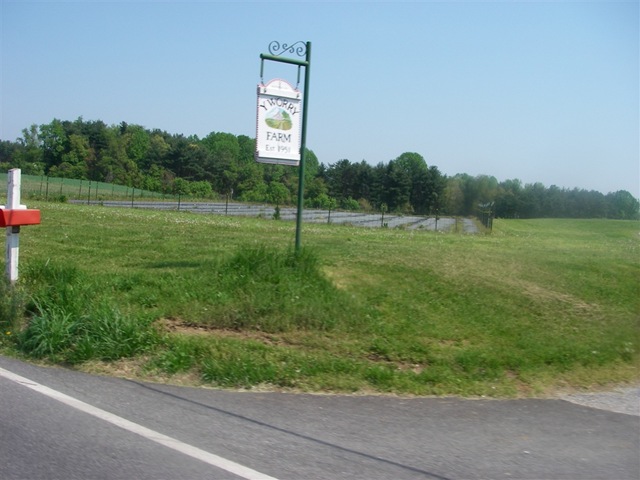 Finally about 4.5 hours later, and after getting ‘off course’ twice I ended up finishing at 87 miles – back at the park where I started. 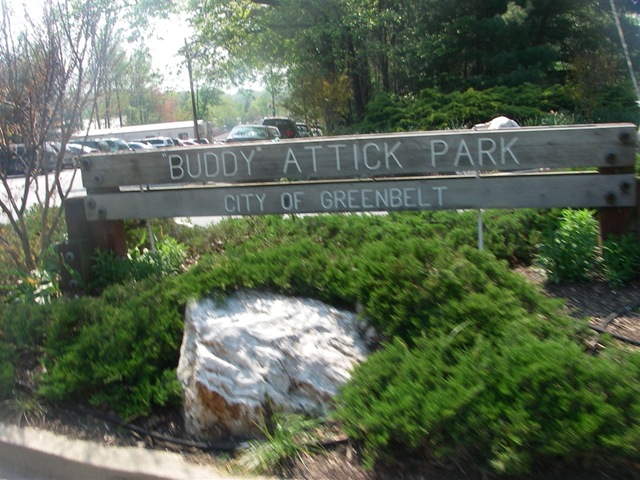 But wait – the fun’s not over yet. I still have to brick it! Off I went for two loops around the little lake, pulling in just shy of a 5K. Averaged a more reasonable 7:30/mile this time (over past weeks I’ve had issues with going way to fast on the bricks, I need to work on IM race pace). And then I got a dude to take my photo. There was some confusion though, so not such a good photo. 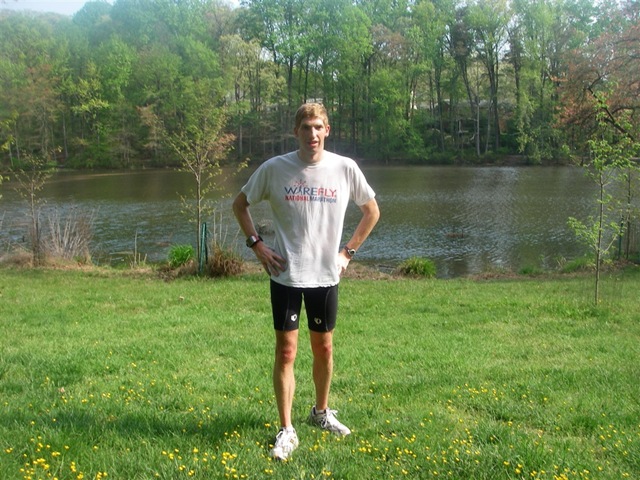 All in all it was a great ride, I felt strong right to the very end – even kicking it up a bit in the last few miles. My legs aren’t sore at all (surprising), and my ass is equally happy. I would say that I need to add the next layer of the nutrition plan into place (calories), because during my run I was feeling a bit underpowered – and my HR was way higher than it should have been. But I’ve got four months to work that all out. Also need to continue to work on aero position, I didn’t do a whole lot today. I know from repeated experience that the second I go into aero position I gain about 1.2mph on the flats – so I really need to get that fixed.

I had planned to do a 3,700 yard swim afterwards, but I’ve made an executive decision to defer it till after the race tomorrow.

Here’s what the whole thing looked like – from way up high: 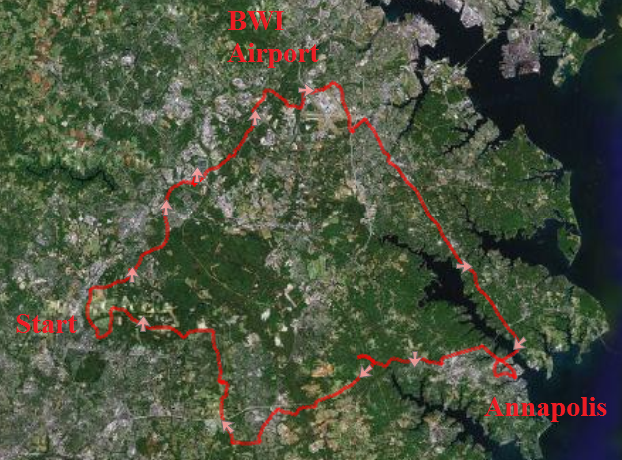 So all in all – an awesome day! Finally an awesome bike ride that I can actually be happy with. Ready for some Wildflower action next weekend!