GW Parkway 10 Miler Report: Aka – the mother of all negative splits

I didn’t have any real expectation for this morning’s race. There was no taper and heck – it wasn’t technically it had been taken off the schedule – and then just put back on again 10 day ago. It was essentially just a training run. There was also no speed work (intervals) done prior. I haven’t done any intervals since November. At this stage in the game my running is all about building my endurance – speed will come later. I kinda think of my self as a car being rebuilt – where I’m missing a lot of the parts still (like the seats, side mirrors, and the dashboard). But I do have an engine and steering. Braking is optional.

After waking up around 6:30AM, it was off to Starbucks for a repeat of yesterday’s breakfast (breakfast sandwich). Given that changing up yesterday’s nutrition plan seemed to work – why not a repeat? After that, it was straight to the busses in Old Town. The GW Parkway run starts at the Mt. Vernon Estate (home of George Washington), and runs to Old Town Alexandria – exactly 10 miles away. So they bus you from the finish line to the start and then you run to the finish. 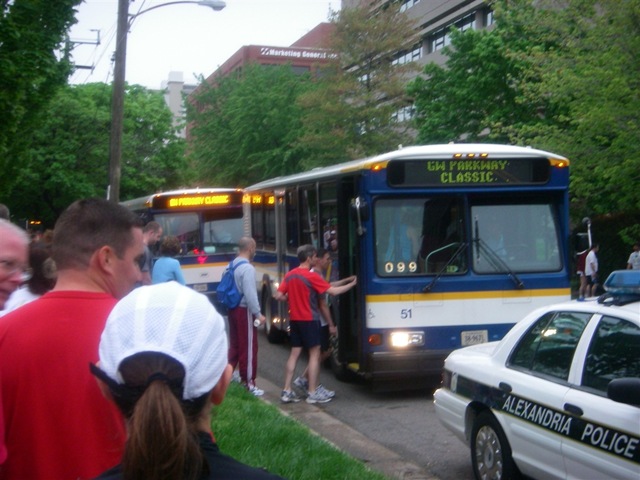 After a quick journey to Mt. Vernon we arrived at the start line. Everyone already had their bibs – but you picked up the chips on race morning. It took just mere seconds to grab it – no lines. After that, it was a short mile warm up run (and tree visitation). 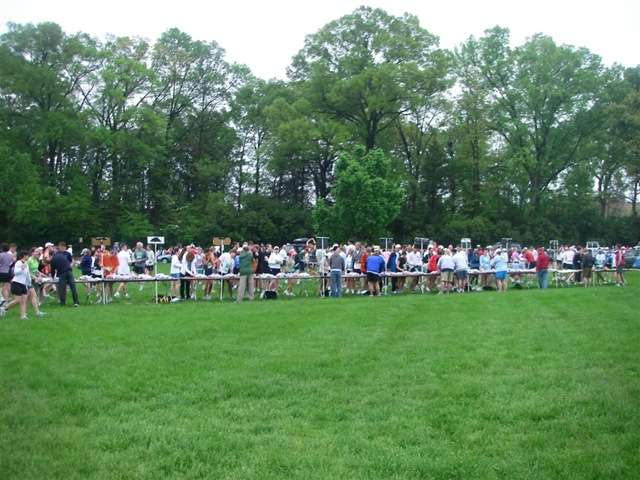 From there, me and the guy who finished three places ahead of me headed off to the start line. We started about 10 feet back from the two winners, but basically on the line. Looking back, you can see the sea of 5,000 peoples. 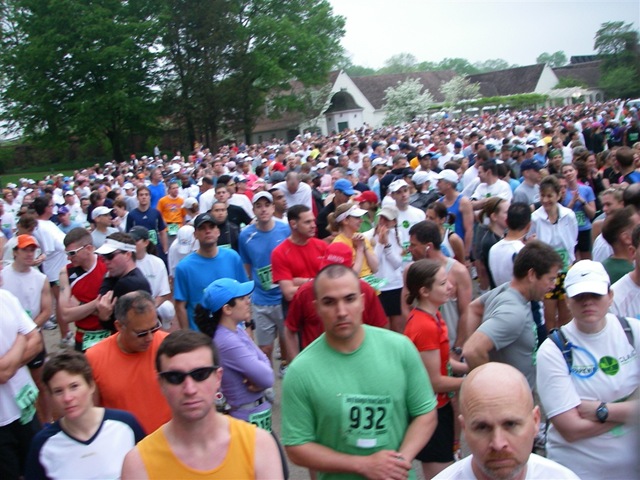 The start of the race was rather anticlimactic – just a horn sounding and off we went. The trick to this race is that the first third of a mile you drop 100ft of elevation – which means many folks start off WAY too fast. Luckily I was roughly near the front, but there was still about 100+ people ahead of me. 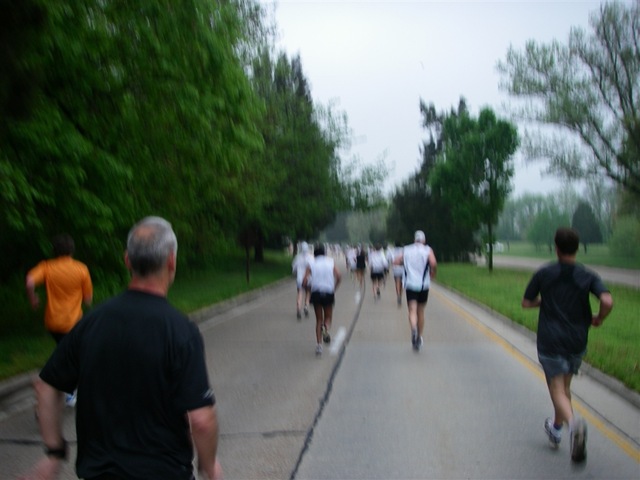 I shall now take the opportunity to apologize for my fuzzy photos. I didn’t exactly stop to take these – and I was truly racing. So it was hold it up and hope for the best. Had it been sunny they would have come out better, but it was overcast and slightly misting.

The first few miles I just kept it consistent at a 6:30ish pace. That was the ‘unofficial plan’. My 10-mile PR had been 66:12, so I figured 65:00 would be a good goal shot. Although I also knew that anything sub 70:00 would have been fine and acceptable given lack of taper.

As I got to the 5 mile marker things had thinned out considerably. Spectators were also giving us ‘place’ counts. At the 5 mile marker I was told that I was in roughly 25th place. Not bad I thought. What was not good though was how far apart we were spaced. The next person was 100 yards ahead, and the next another 100 beyond him. See fuzzy photo below. That white dot is 24th place. 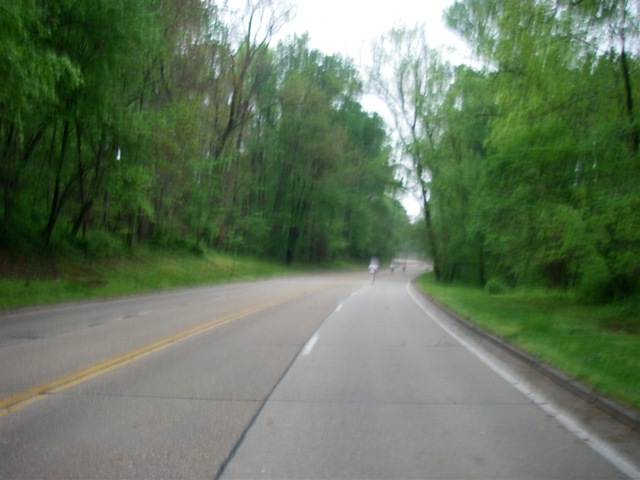 At this point I started speeding up. Not exactly by design – it was sorta just whatever felt good. I briefly looked at my HR and nearly crapped myself. Note to self: Don’t look at HR again. I just kept it at whatever felt good – while ever so s.l.o.w.l.y reeling the person in ahead of me.

Here’s my fuzzy 3 miles to go self-photo…while running at a 6:08 pace. 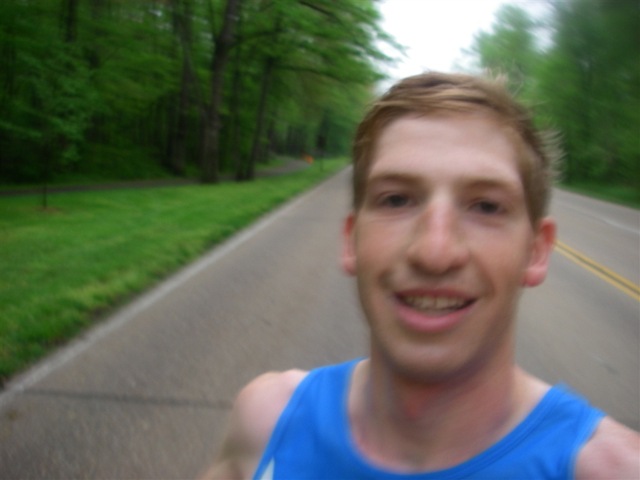 I took out a guy at the next water stop (just after mile 7), he was starting to break down.

Shortly after that we had to cross some windy flats – which sucked…actually, that was a point of conversation between me and #24. I said “This wind blows”, to which he responded “Tell me about it”.

I responded with “Thanks – but that guy’s a hell of a long ways away – we’ll see. Good luck!”.

And off I went – up the slightest incline that gets you over the highway. I run this portion of the route every Thursday – I know what it takes to run that little hill right. And I blasted up it. From there it was down the hill and past #23.

Next we came up on the last hill at mile #9. I love hill running during races. I passed this dude on the hill (who’s much skinnier than the photo makes him look). #22 down. That is gun time + 3 seconds differential for my start time. 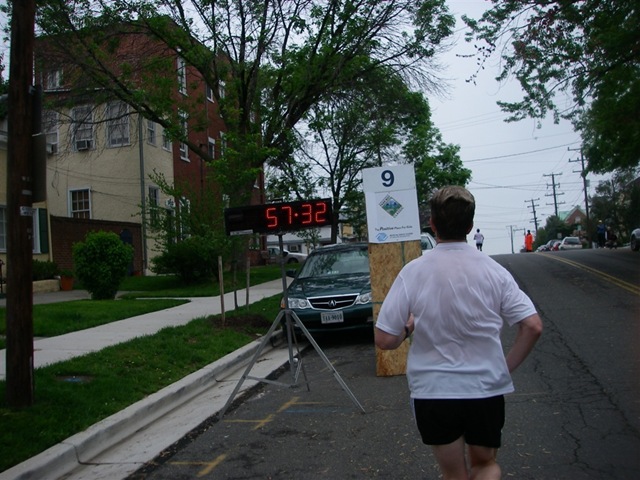 As I crested the hill past the fans, a lady shouted out “You’ve made it over the last hill!” – to which I shouted a resounding “Hallelujah!!!” – that got a laugh from the small crowd.

Next up, the home stretch of just under a mile straight down the main drag. I took this opportunity to take one last self photo. 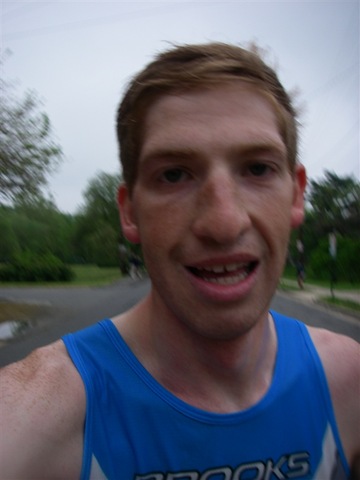 (I never said they were the most flattering photos)

At this point – I’m up (or down) to a 5:44/mile pace and just bounding along. Getting faster with every block. I could see the finish line about half a mile ahead and some of the crowds. And one last person ahead of me. 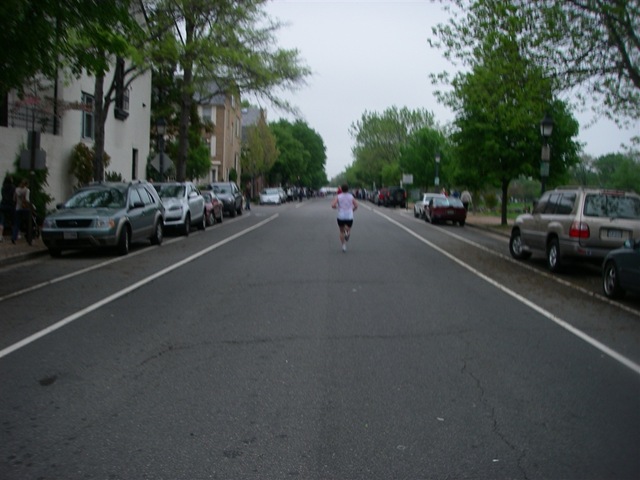 I pushed and pushed – and slowly got within reach. Don’t be mislead though – this guy was still very much in the game and hauling ass by all standards. Somewhere off to the left said a few seconds later was Lesser is More & Rebecca, and then a short bit later The Lazy Triathlete. 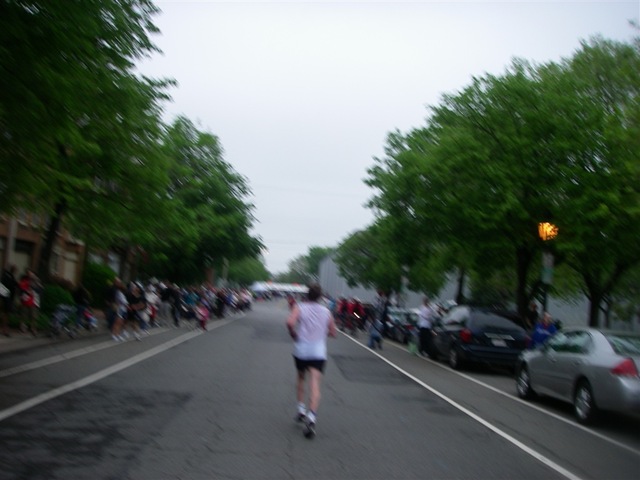 I snapped this photo, put down the camera – and said out loud “Let’s nail this”. And I took off like a bat out of hell. Like a rocket engine being lit. The feeling was indescribable – pure adrenaline. I passed this guy like he was standing still. The crowd cheered. My Garmin said I clocked 4:15/mile pace for this final stretch. He had no idea what hit him and couldn’t do anything about it. It was like my mini-version of this video.

After passing him but still at serious haul ass speed I took one last photo of the finish – which the crowd loved! Hopefully the photographers got a photo of me taking a photo. 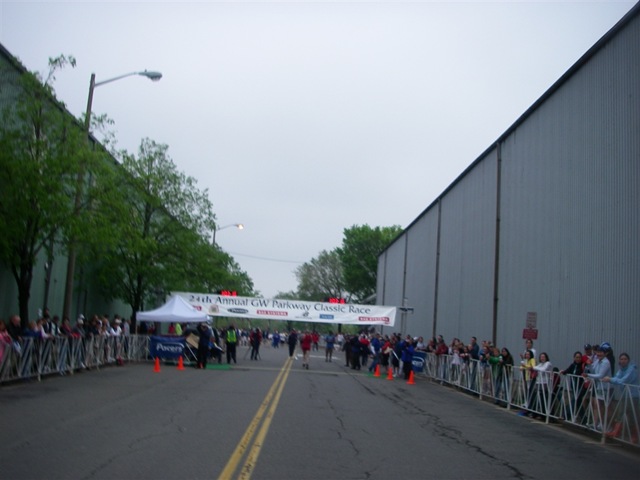 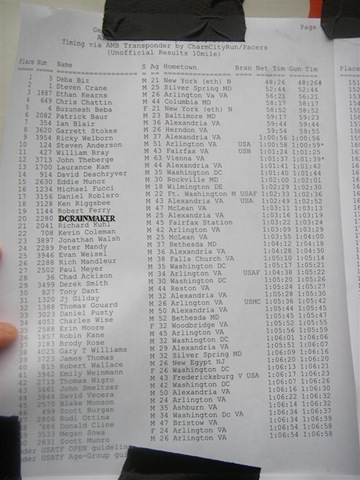 But the real kicker is the negative split I ran:

After that I caught up with my friend and occasional running mate (17th place). 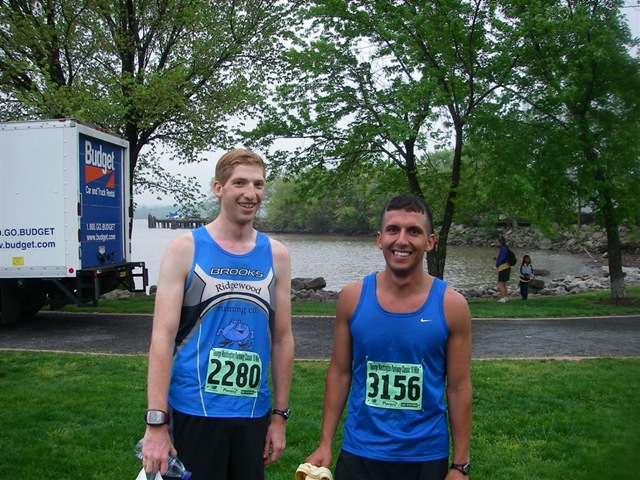 (Yes, my cycling tan is awesome)

Overall this race exceeded my expectations in every way. Given the huge mileage effort the day before I wasn’t expecting much – so this rocked. I shaved off more than 15 minutes off my time from last year in this race, and three minutes from my 10-miler PR back in November. And at this race I’m ahead of where I want to be to meet my year end goals.

Oh…after that I knocked out 3,200 yards in the pool (shortened from 3,700 yards). And then played a round of golf (walking, should have gotten a cart). I suck at golf. This below photo was the story of my day…at…every…hole. 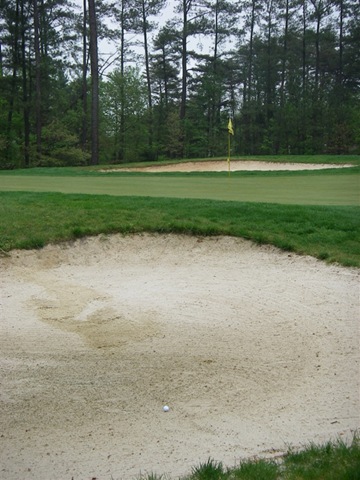 Oh, and the weekly totals:

16.3 hours of training (down slightly because of the race cutting out my long run)

Have a great week!