Dang it’s hot today.  To illustrate my point – here’s a screen shot of the the weather.com page for the area: 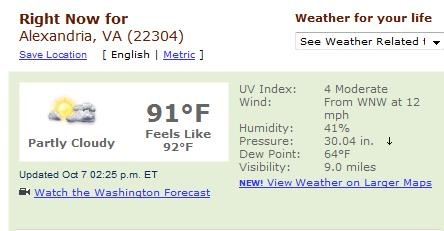 Now mind you – it was actually far more humid earlier in the day (albeit slightly cooler).  I wasn’t really sure how the whole ‘race while drenching/baking’ thing would work out.  I’m not what you call a warm weather person.  My idea of a perfect race day is 35* (F) and overcast – heck, even night time would be best.  Seriously. Anyway’s… I digress.

Woke up around 6:10AM, out the door by 6:30AM.  Breakfast consisted of a random Snickers Marathon Bar that I got last weekend at the Nation’s Tri Expo (it was tasty!), a banana, a bottle of propel and half a bottle of Heed.  Sorta whacky, but hey – it worked!

I went for a quick wander through the port-o-potty line (actually, it wasn’t that quick of a wander, given the gazillion people in front of me).  There’s nothing more patriotic than being inside a port-o-potty when the National Anthem is being played.  Shortly thereafter I headed over to join 25,999 of my closest friends for a nice jaunt around the city.

The race actually started on time (perhaps even a touch early).  I was in the first wave, so within about 90 seconds I crossed the start line.  The run is fairly flat for the first mile before adding a tiny bit of elevation to go over the bridge into the city.  It was funny, at about mile .75 I saw a guy that was already drenched in sweat.  Seriously, if you’re that drenched within 5 minutes of the start of the race – you’ve got a pretty slim chance of finishing.

Over the bridge and through the woods I went.  Around the loop, under the bridge I went.  Down the mall I went.  On the stretch down to the capitol I saw the race leaders coming back – about a mile ahead of me, at mile 7.  They were cooking.  The top guy ended up with a 4:58/mile.  Holy crap.  I don’t think my car can even go that fast.

Just in front of the capitol (mile 6.5), that were was a timing mat to record your time (and catch cheaters).  After that it was more or less a straight shot back down the mall, over the 14th street bridge and to the finish at the Pentagon.  The last 1.5 miles was pretty brutal, mostly getting up onto the bridge, and then a short series of hills going up and down various highway overpassses/underpassses on the way to the finish.

My finish time was ahead of my race goal of 70 minutes, so I’m happy there – especially given the weather.  It was brutal with the humidity.  At the finish line when I crossed – everyone was drenched with sweat and water from all of the free water bottles (trying to stay cool).  This was by far the fastest I’ve ever run this distance (or any distance near it), so I’m happy there as well.  But I wish I could understand what my current limits are better.  For example – could I run a 6:30/mile half-marathon?

Because they aren’t posting any photos until Thursday, you’ll have to make due with the exciting bib shot – but I did toss in my finishers coin.  The Army 10 Miler and Marine Corps Marathon finishers coins are pretty cool. (the pen mark through my bib is to denote that I’ve picked up the coin – no worries, no penalties here). 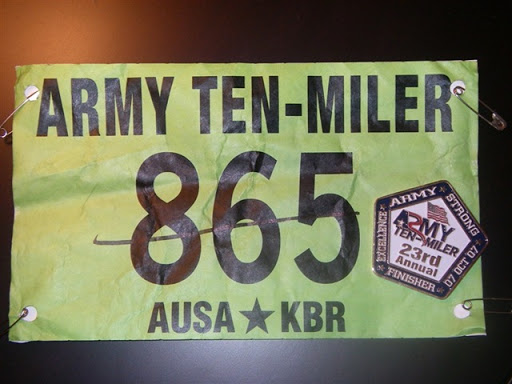