Yes folks – you know you wanted it!  A complete comparison between the two variants of the same Ben & Jerry’s flavor: Chocolate Brownie Fudge.  One is the ‘normal’ version, the other the ‘low fat’ version (speaking of which, did you know they also make an Organic Version and a ‘Body and Soul’ version?).  Anyway’s…A quick glance at the back shows a considerable savings with the low fat variant: 170 calories a serving, compared with 250 calories for the regular version.  And on the total fat side – 2.5g compared with 12.5g.

First things first – let’s get some visuals going on here: 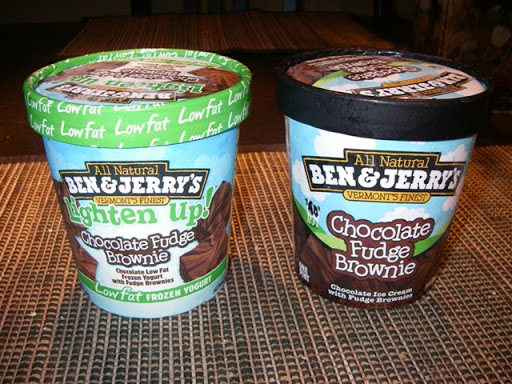 In the left corner we have the green machine themed “Lighten up!” version (yes, it’s really called that – I don’t make this stuff up).  I think they’re trying to trick you into thinking that green = good for environment = good for you.  Let’s be clear – it’s still dessert!

In the right corner we have the reigning champion, black-belt Chocolate Fudge Brownie.  It has captured dozens of freezer door title positions with only the occasional loss to Cherry Garcia.

With that in mind, let’s give a back door shot of the stats: 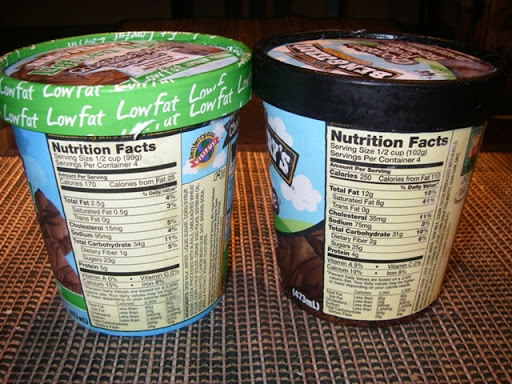 Onto the taste testing!  Let’s do a breakout to ensure more scientific data analysis:

Consistency: The low fat version is clearly ‘lighter’ from a thickness standpoint – not bad, just softer and lighter – kinda more airy.  This is in contrast to the thicker original version with a bit more substance to it.  This is logical given the green machine is technically a frozen yogurt and more like soft serve.

Chunks of stuff: Ben & Jerry’s ice cream is all about chunkiness.  Could the green machine live up to a chunky experience? Mostly; it turns out.  There’s a tiny noticeable decrease in the amount of goo and chunks in the light variant, however if you weren’t tasting them side by side – you wouldn’t be able to notice.

Taste: Despite the green machine having a lighter consistency – it comes through in the taste department to deliver a strong bold chocolate fudge flavor.  The slightly fewer chunks do reduce the brownie flavor a tad – but again; not noticeable unless side by side.  The black belt version of course carries through with a strong performance as expected.

Overall: Unfortunately, in order to declare a winner – I think I’m going to have to do some more in depth testing.  However; preliminary results suggest that you could indeed substitute the low fat version for the perennial favorite if you weren’t doing as many bricks or 20 mile runs. It tastes roughly the same and unless you were doing side by side comparisons you wouldn’t notice the minor changes.  Lastly, if someone wants to provide me with a location to actually purchase the other two variants of Chocolate Brownie Fudge (Body and Soul, Organic) – I’d be happy to complete a four-way taste testing extravaganza!

One last thing – in case you didn’t know, Ben & Jerry’s actually has a small book you can buy for about $10 that has all of their popular ice cream and sorbet recipes in it.  I make them all summer long and they come out awesome! 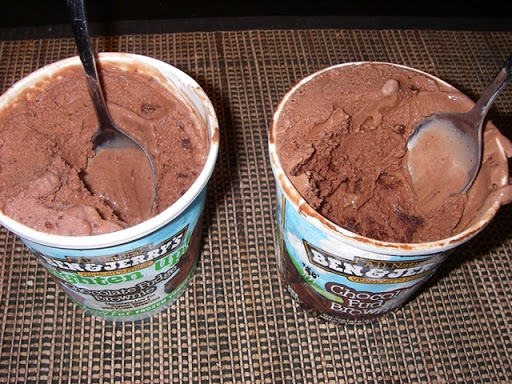