A few weeks ago my brother, dad and I were at Target in the toy aisle having all sorts of fun with the various kids toys when I stumbled upon a rather interesting toy set (side note: We were shopping for my little cousin – not for any of us).

I can understand the little baking sets that kids want, or even the little ice cream things that they make – and perhaps even mini-toaster ovens for kids.  Actually…come to think of it – I wanted one of those little ice cream sets when I was a kid.  Now I’ve got a real once instead (which..btw…I make the best Raspberry Sorbet ever!  I’ve experimented with everything from Kiwi to Pineapple to even Cucumber…but that’s a different story).

But here – in an age were younger kids are more and more obese, and even with films that explain the dangers of eating certain foods all the time, I found a McDonalds pretend food set.

Now don’t get me wrong, as a kid I thought McDonalds was the best thing ever..ever.  Mmmm…nothing could beat an Egg McMuffin or a plain cheeseburger.

But my parents certainly didn’t let me have it regularly – it was a special ‘treat’.  I can’t see how one would buy a McDonalds food set and think that the kids won’t naturally assume it’s good for them.

The good news is that they did include two pickle slices in there…so at least the kids understand the importance of proper vegetable toppings on burgers.  And fries are potatoes, and potatoes are vegetables…right? 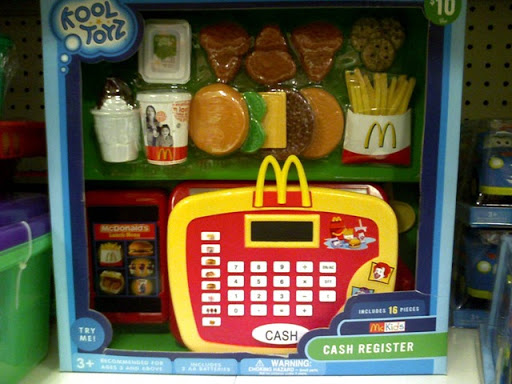 Oh…and as a random aside (although oddly related).  Tuesday I went out for a nice long bike ride  during lunch.  The weather was incredible…so why not.

But…someone had brought in some cake to work from over the weekend – it was Redskin’s football field decorated cake – leftover from a party or something.  Of course..that didn’t whole game thing work out so well for them (but GREAT for us Seahawks fans).

There was no clear message as to the specific purpose of the cake, so I helped clarify that with a printed out sign next to it congratulating the Seahawks.  Seemed appropriate to me.  Didn’t want any confusion.

Anyway…after my bike ride, I was hungry – and there was free cake nearby.  And I felt like I earned it.  But I couldn’t find any plates, or even forks for that matter.  But I did have a stash of barely used DVD’s around my desk.  So I dug out an old Vista Beta disc from over a year ago, and used that as my plate.  I had to use a spoon, cause I have a box of spoons in my cube.  The cake was ok, a bit too much frosting for my liking. 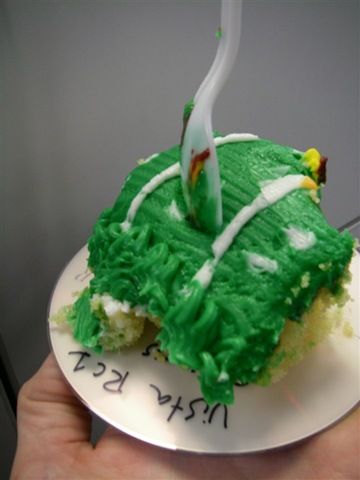 Yes…I did indeed just write a post first criticizing unhealthy eating habits, and then finishing up with eating unhealthy cake on a used DVD lying around.  That’s just the way I roll.