I had originally planned earlier this year to use the Army 10 Miler Race to try and go sub-60 minutes.  But after my coach and I developed a plan for the year which included going solidly below 3:00 for the Philly Marathon in six weeks, we concluded it was going to hose up the schedule too much – so we instead just turned it into a long run.

But before we get to that, let’s do a quick recap of the rest of the weekend. 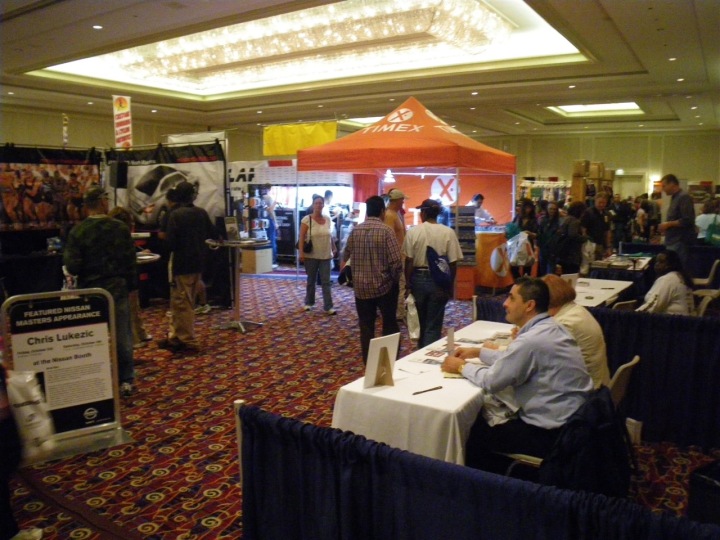 Then later on that night I cooked up BOTH some fresh meatballs and fresh pasta.  I try to make my Grandma’s ‘Secret’ Family Meatball Recipe at least once a year and then freeze the majority of them for winter.  This would be the Italian half of my family btw.  Oh, and we were ever so continually tempted to bust out singing the meatballs song; however we refrained. 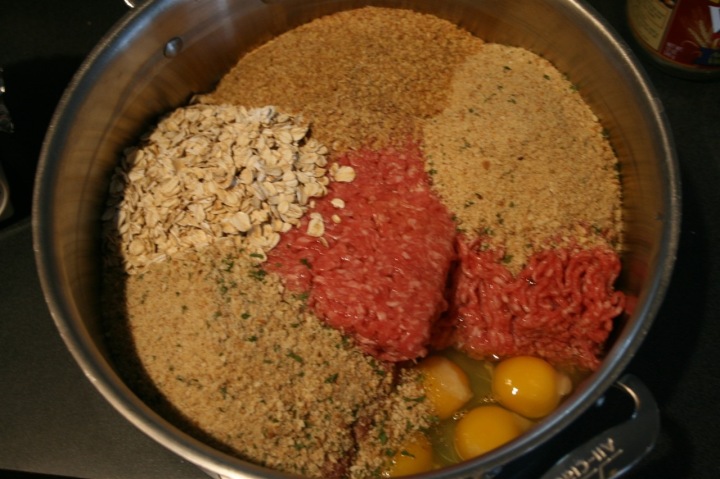 So my friend and I pounded out about 40 meatballs in record time.  Do you know how many meatball and meatball rack jokes are out there?  Let me tell ya…plenty.  At least as many jokes as actual meatballs. 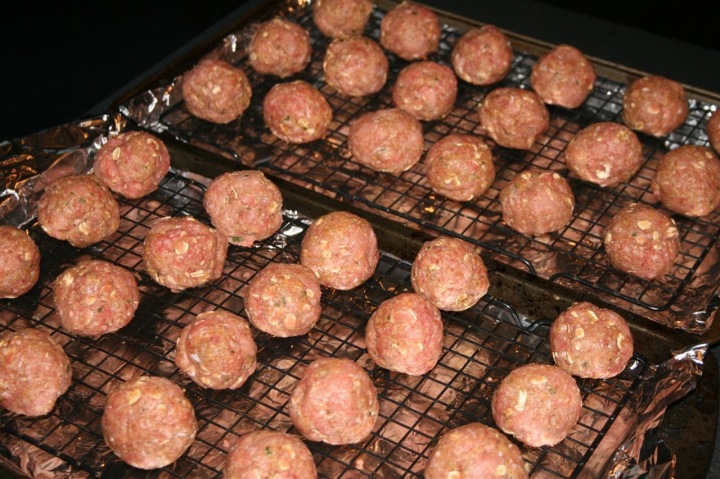 While the meatballs were cooking we whipped up some fresh fettuccine.  No, not from a box, but from flour, eggs, water and salt.  Old school style. 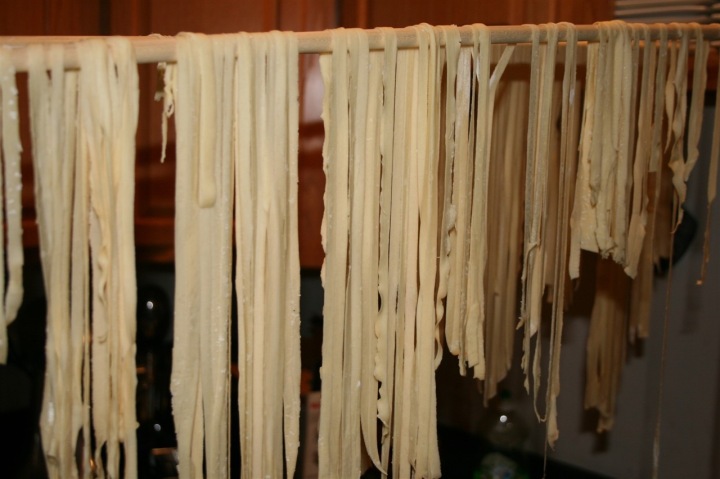 By time the meatballs were were done, we had just finished making the pasta.  Shortly thereafter, done! 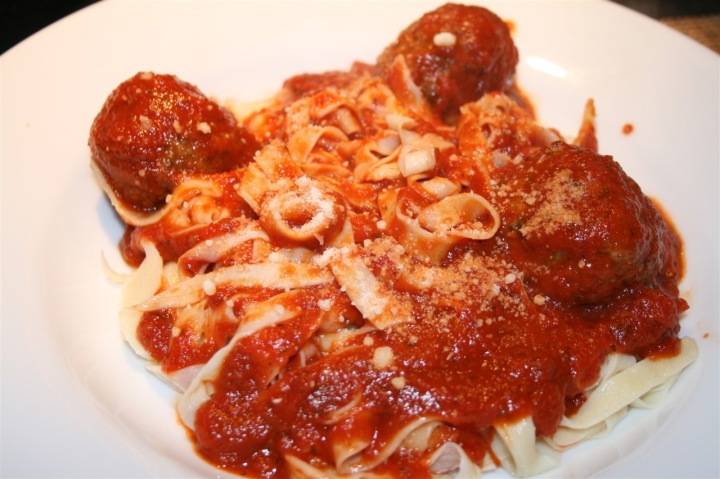 Saturday I really didn’t have a lot to do.  Although my body continued to be upset with me and a slight head cold I had increased in intensity. This became painfully apparent when I did an hour long medium intensity trainer session and my wattages were nearly 100w lower than normal.  Ouch!  But I’ve got some sweet details on that for later this week. 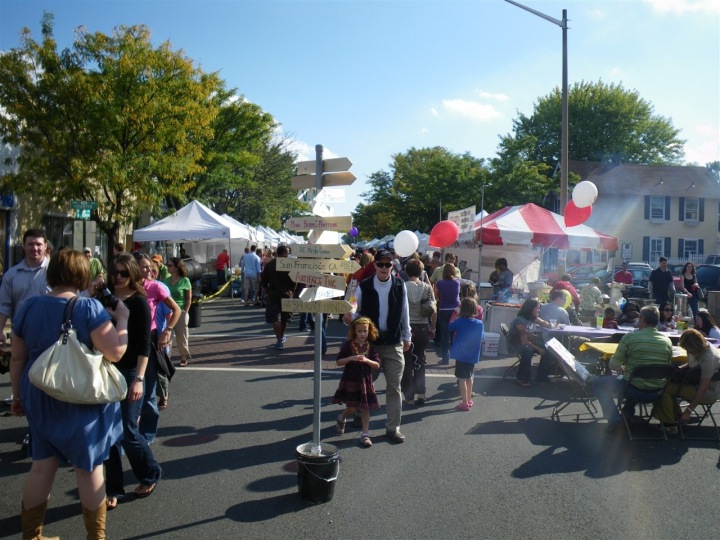 On the advise of a post from Lindsey, I did go check out the Del Ray Street Festival aka Art on the Avenue.

It was pretty cool, I almost picked up a few pieces of art work, but couldn’t quite decide.  Plus, I had biked there – making it slightly more difficult to carry larger pieces back.  But I did collect some biz cards, so I might change my mind.

Along the way I found these chocolate covered bananas…yum! 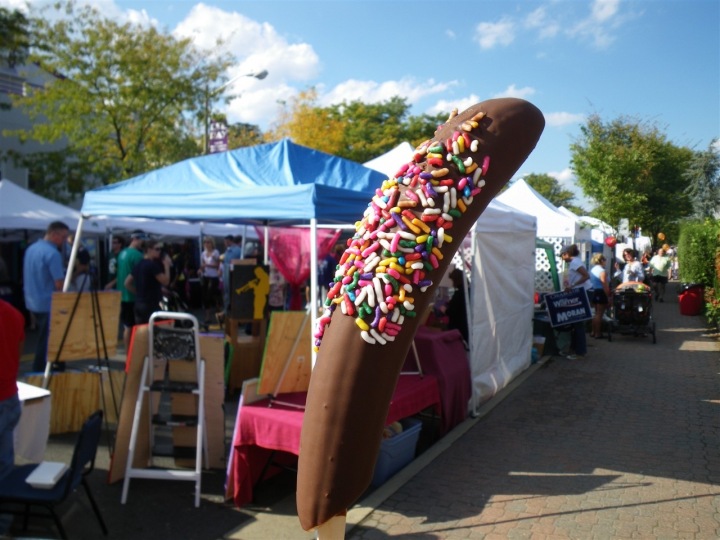 And on the way home I swung by the Cupcake place (oddly, another recommendation from Lindsey) to pickup a few cupcakes.  They were however a wee bit rough by time I finished biking home. 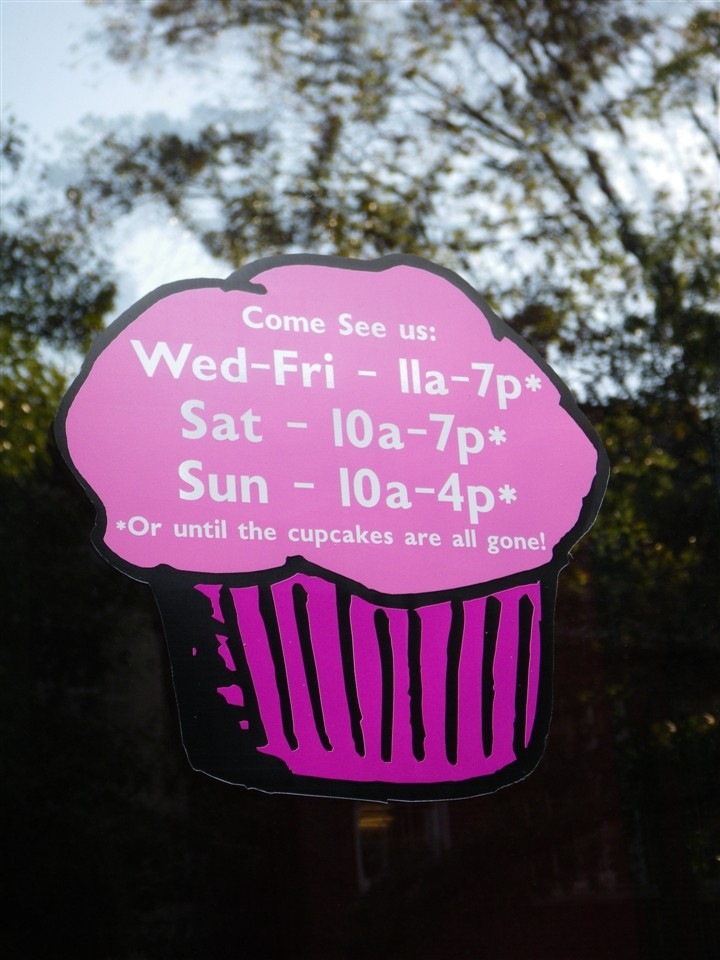 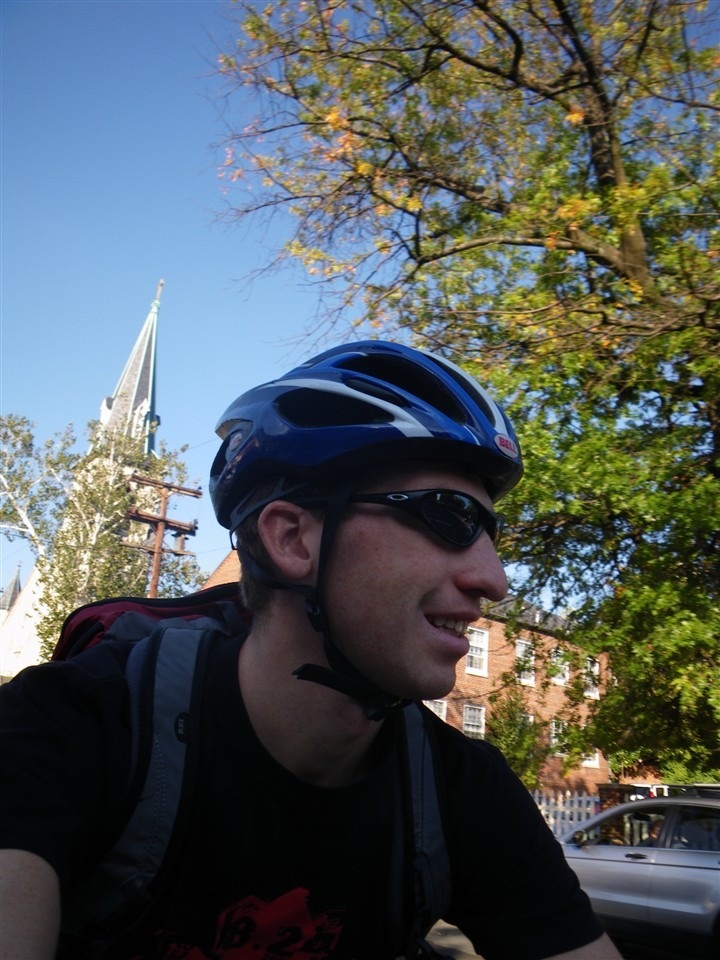 So Sunday Morning rolls along and it’s a very carefully choreographed time dance.  As mentioned earlier – I decided against ‘racing’ it, and instead was going to be a pacer for my friend trying to break 70 minutes.  In addition, I would also run 10 miles prior to the race and then the 10 mile race itself.  To find the mileage I would just simply run from my house to the Pentagon, with some loops/twists/turns tossed in to turn 6 miles into 10. 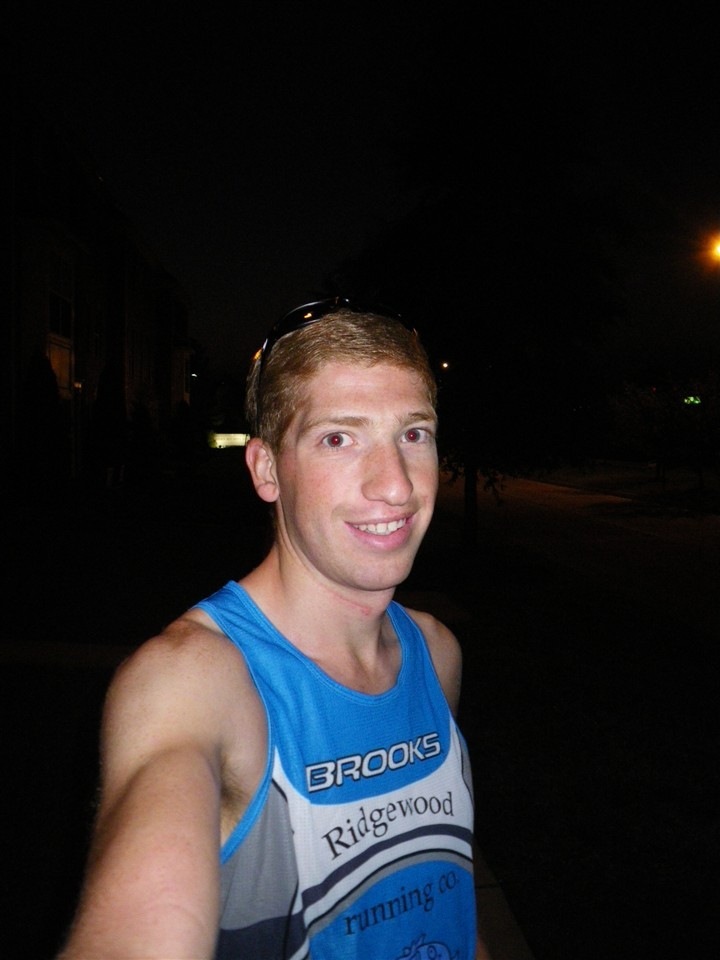 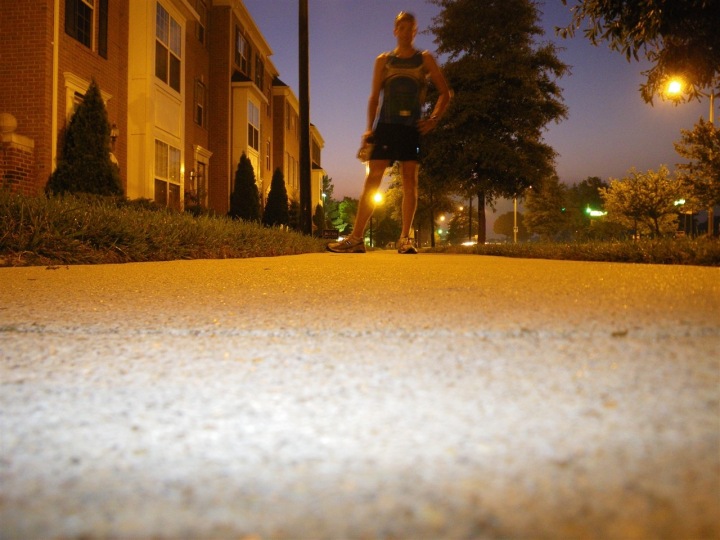 My first 10 miles I knocked off in a conservative 72 minutes.  I didn’t want to push too hard, especially with being sick.  My HR was about 10-12 beats higher than it should have been for that pace due to being sick…but I didn’t care.  Just run.

I get to the Pentagon at 7:50 (for an 8:00AM start) and quite simply can’t find my friend or large group of friends.  Despite tons of looking, no luck. 🙁  Although while searching, I did find Lindsey.  She’s just all over this post today.

Shortly after seeing her I decided to head on out (there were 26,000 runners, so it’s just a matter of crossing the mats).  Now…here comes the way paragraph of Rainmaker unhappiness.  I had my little camera with me, but they wouldn’t allow me to take it in.  Somehow I had missed that on the extensive prohibited items list.  And people with guns are hard to argue with.  🙁  I had to find a friendly looking grandma and give it to her to get later.  At least she was nice 🙂

Oh, as for my one paragraph of unhappy…here goes.  Last year I was selected to an in person survey group regarding the race where they sat and listened to us for a while.  It appears that they really didn’t listen to anything we said, or our recommendations on how to make it better.  I really love this race and the community around it, but there are a number of frustrating things about it and those simply weren’t changed.  Bummer.  Anyway… 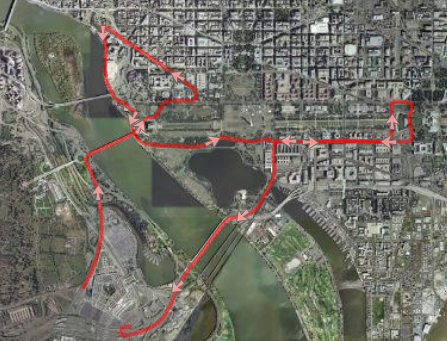 Off I went… I ran, I decided to pick about 72 minutes for the ‘back 10’, and just stuck with it.  To whomever shouted out my name ‘RAINMAKER!’ around the Smithsonian’s – I heard ya! You rock!

One of the big draws for this race is that many wounded soldiers race in it, generally with some form of prosthetics.  In addition you see many, many, many home made shirts memorializing soldiers lost in Iraq or Afghanistan – I saw one with a date as recent as 12 days ago.  All of the soldiers running with prosthetics have a ‘buddy’ or team running with them throughout the race, with specific team shirts.

However around mile 9 I noticed a guy with a prosthetic leg that no longer had a buddy.  He looked like he needed some encouragement and support in finishing up that last mile of rollers.  So I slowed a bit and just ran with him in.  I gave him encouragement as we picked off people ahead of us, one runner at a time.  Congrats Jonathan, you’re incredible! 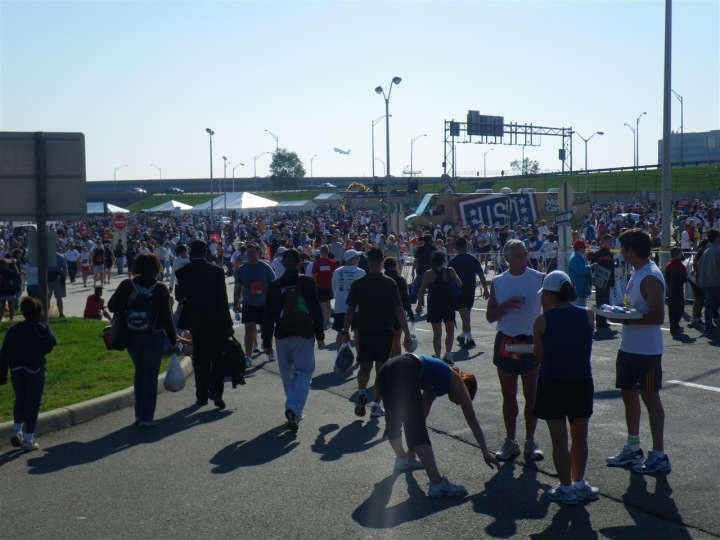 Afterwards, my friend spotted the Geico Gecko – and we clearly needed a photo with him! 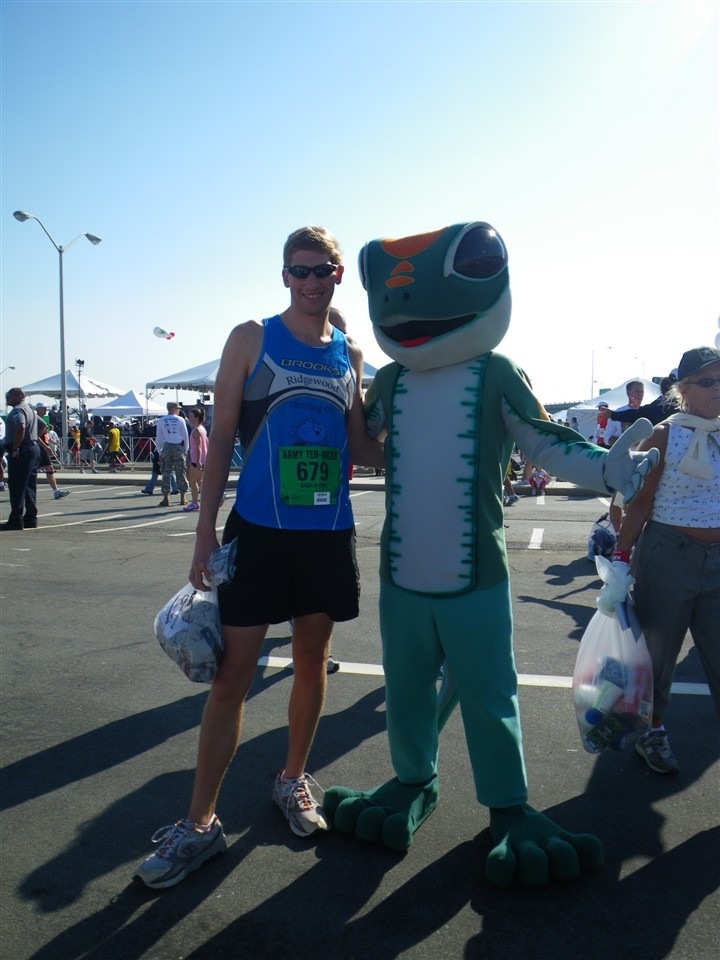 The best part however was the Polaroid they also gave me.  I love how it’s completely cutoff and with about 98% of the picture containing the sky. 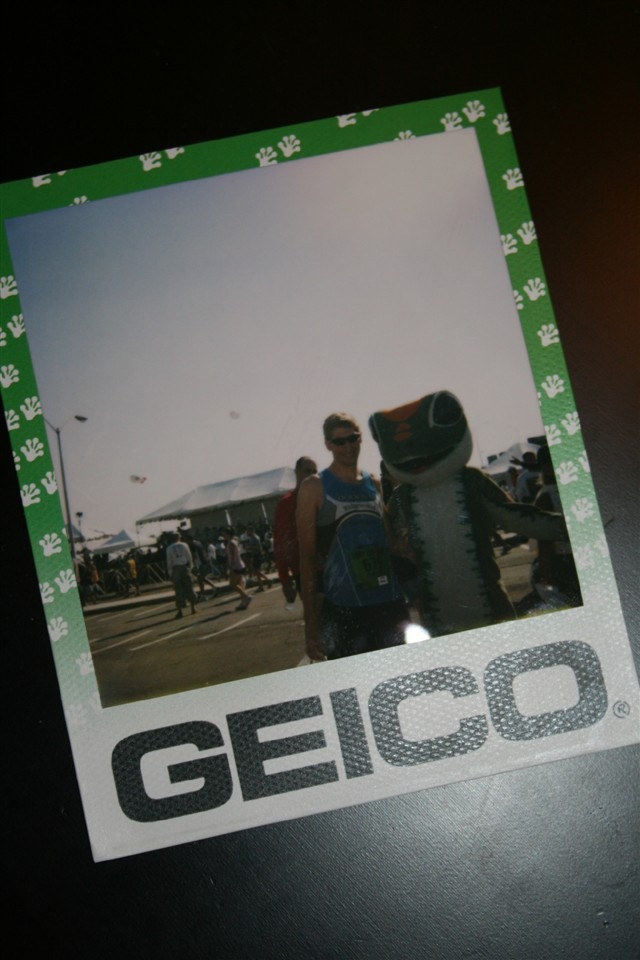 So that’s roughly my weekend.  It’s time for me now to jump on the trainer for a bit to loosen things up and then cook some dinner.  I’m hungry again.

Holy crap this got long…sorry…my bad.