Sometimes, you’ve just got to stop and enjoy the day. 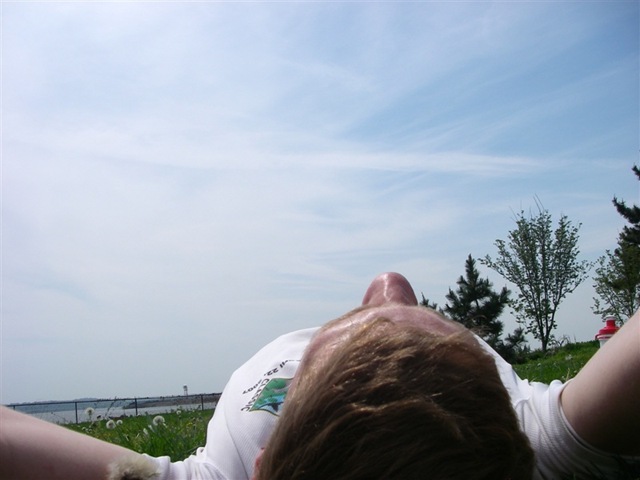 So I did just that. While last weekend inaugurated the warm weather back to DC, this week brought in the *nice* weather. Woohoo! After my 20 mile run and then brickesque 20 mile ride, I decided to simply hang out at Gravelly point (where my run/rides started/ended). 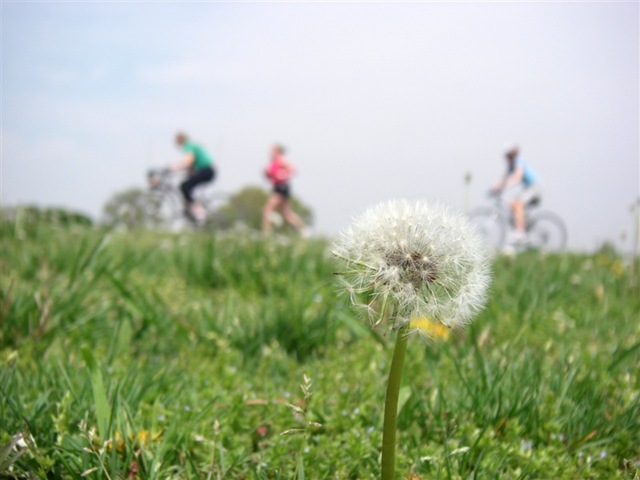 And thus I just laid down in the grass like a number of others and simply enjoyed the day in the warm sun. People watched hundreds if not thousands of people streaming down the Mount Vernon trail, running, walking and cycling. All while watching the planes land but a mere few hundred yards away. Gravelly Point is really an all around cool place to hang out, especially with views of the major monuments off in the distance. 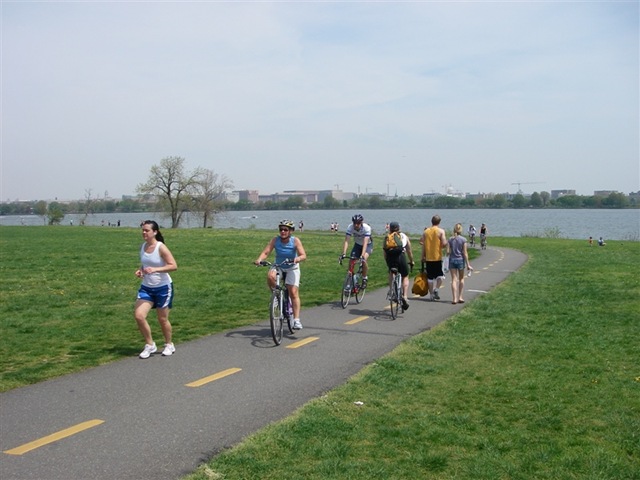 I got the nutrition/hydration aspect totally nailed yesterday as I’ve now gotten back in the swing of hot-weather running (it was 84* out). Although my 20-mile pace was off about 7 seconds/mile from a few weeks ago, it was about 15 seconds/mile better than last weekend. So we’re getting that back on track. Heart rate was staying where I want it too (Z2).

Following being lazy in the sun I ate and drank a crapload, and then fell asleep for a hour. I felt soooo good after the short rest. The subsequent 3,500 yard swim went fantastic, nailing all of my intervals to the second. And I had 45 seconds to spare when they closed the pool for the evening. Perfect timing. Then off to hang out in Old Town for the evening with friends.

Today was bike day. Well, bike and run I guess. And the weather decided to crap all over the place. Nonetheless, out I went for a 60 mile ride. Started from Roosevelt Park along the Mt. Vernon trail, and then hopped over to the Capitol Crescent trail before heading a long ass ways north to the absolute middle of nowhere. 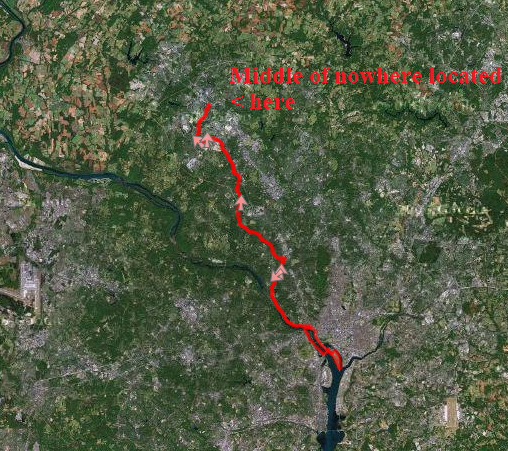 I spent over 4 hours in the rain (including the run), thunder and lightening. I am sick of the rain. It was cold, I was cold…it was wet, and I was wet. I want yesterday’s weather back pronto! 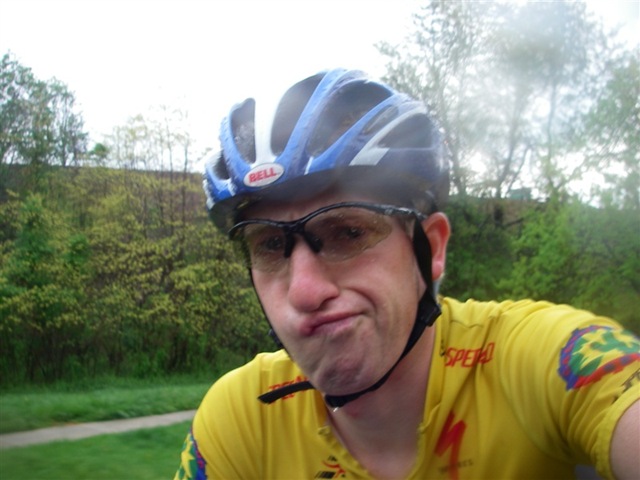 I took the below short video on the way out. I was still cold at that point. Oh wait, hold on – I never stopped being cold and wet. My bad.

The worst part about riding in the driving rain is playing the game of “Puddle or Pothole?”. That’s where as you’re cruising along (or flying down a hill) you have to figure out if that thing out in front of you is just a harmless puddle, or a hidden water-filled pothole. If you get it wrong, you get the third “P” – pavement. Oh, and you have to watch out for the senior citizen church drivers who can’t drive. I nearly got taken out twice by seniors leaving churches, one was on a cell phone to boot. The other almost took out a pedestrian as well in the process. Quality.

I followed this route, and then turned around midway after my prescribed time passed. It’s a nice route. Not too busy and I was mostly able to follow the directions. I made really good time on the way back so I ended up heading out to Haines Point for a loop. It was pretty desolate – unusual for 1PM on a spring weekend.

Although there were some confused Cherry Trees still blooming (well…I’ll be honest, I have no idea what kinda trees they were, but as far as I’m concerned, they’re Cherry Trees). 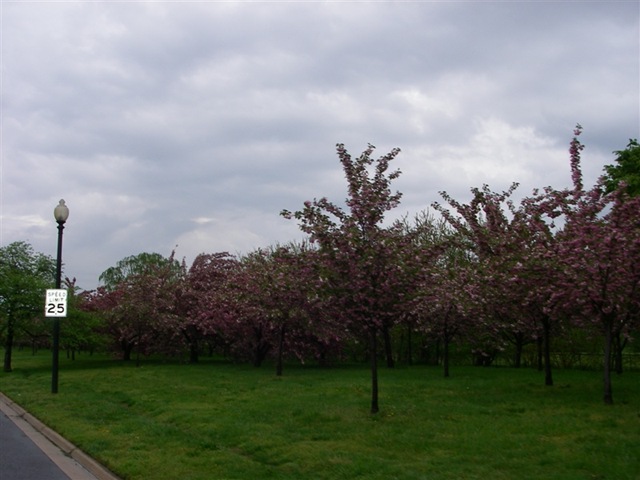 Following the bike, it was the usual 5K run. I went offroad to keep it interesting and ran over to Roosevelt Island. It also helped slow me down some, as I tend to be a bit fast off the bike on what should otherwise be a Z2-Z3 brick. Never actually been over there before except to run to the porta-potty. Nice place though. Two loops later I was done.

I had planned to go golfing (aka goofing off with a golf cart) with a friend this afternoon – but the lightening put a stop to that (and seriously, I didn’t need to spend ANOTHER three hours in the rain). Instead… I cleaned my bike.

I realized that when I got home I’d have to get my bike cleaned fairly soon – not to mention that I was still soaking wet…and cold. So I combined the two together. 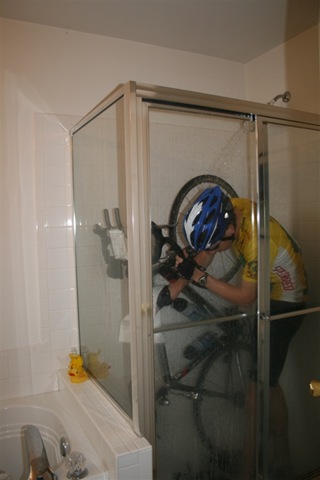 Yes, I can indeed top just taking a shower with my helmet. I go the distance and take the whole bike in. What? Were you expecting a garden hose? Given my bike had already spent four hours in the water, what’s another 10 minutes. Plus, there was really no other good way that I could figure out as to how to clean it. It was dirty as hell. I didn’t use anything other than water – but it looks all nice and shiny now. And so am I.

I just checked out the numbers for this week and am somewhat blown away. It didn’t feel like a super-hard week, yet it included 17.5 hours of training. I think I’m starting to get into the groove of this new schedule. It really helped that Saturday went so well from a nutrition standpoint, made things really come together and didn’t make them overtiring. Although today’s bike was a bit of a slog because of the rain.

I’m getting really excited about the run portion. Given my schedule assumes a minimum 20 mile run every Saturday (minus recovery weeks), my run base is really starting to transform. Even just yesterday, my legs didn’t hurt beyond just a few hours after the run. It’s funny to think that during marathon seasons most plans assume a single 20-miler. I’m not only excited about the run in the Ironman, but heck – I think I’m just as excited about fall marathon season. And we still got four months till Ironman Canada – woohoo!