Tidbits and Tech From a Week Skiing in the Alps 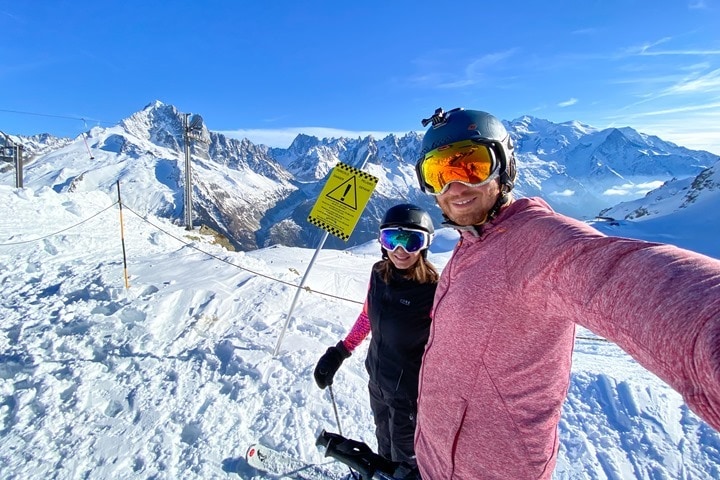 A week ago we escaped down to the convergence of France, Switzerland, and Italy. By and large, it was all about family time skiing. After all, I somehow managed (albeit not on purpose) to not publish a single post or video that week. Don’t worry, I somewhat made up for it on Instagram Stories.

In any case – more for my own purposes 20 years from now than anything else, here’s a handful of items from this week skiing. Note that technically we got back a week ago, but the backlog is strong right now!

Each morning we’d drop off The Peanut (P1) for ski school, and then race away to get in approximately 2.5hrs of skiing without kids. The other two goofballs would hangout with a babysitter. We haven’t skied together in four years, since this post, when The Girl was pregnant with P1. Crazy how time flies!

But we’re not here to reminisce, we’re here to ski (though, that link is packed with awesomeness, from tech to gadgets to pretty ski shots and videos). 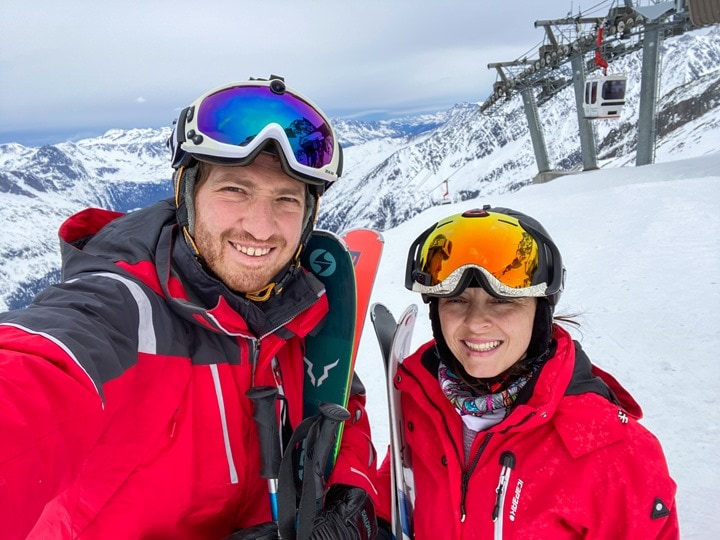 And by ski, I mean also sit hill-side, sans-kids, and drink coffee mid-way down a mountain: 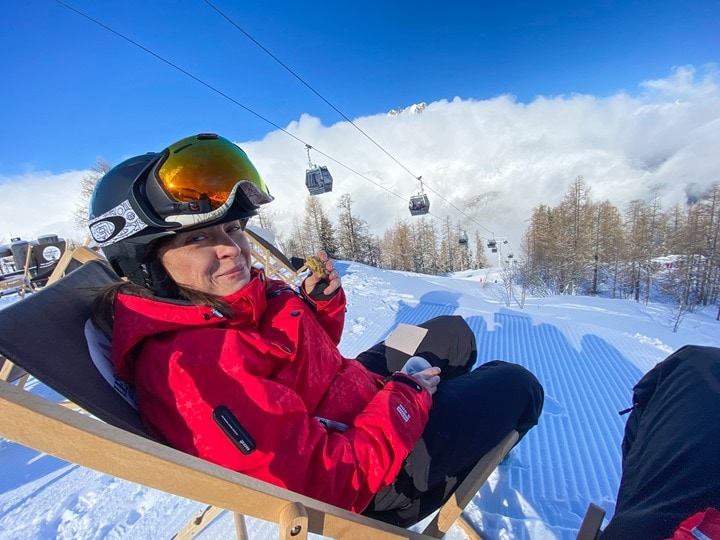 But we did ski – and got in as many runs as we possibly could in that very short timeframe. 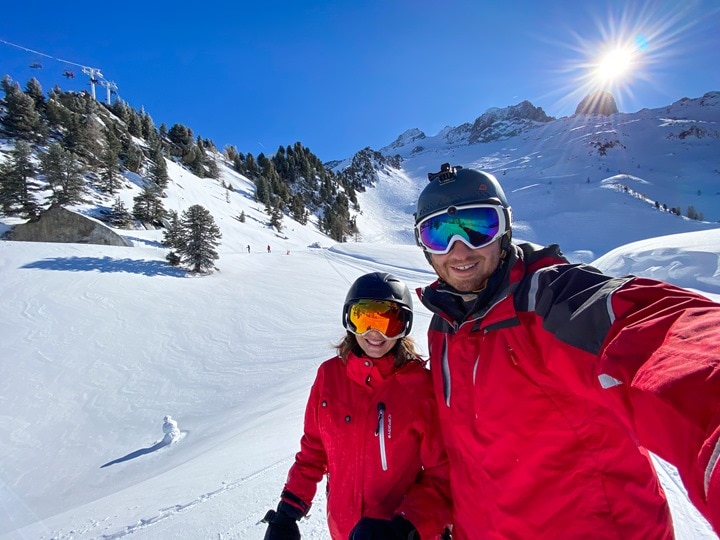 Rinse and repeat each day.

Except for Wednesday. That day it was snowing heavily, and The Girl decided it was a good day to enjoy not being blinded by snow. I meanwhile, went at it: 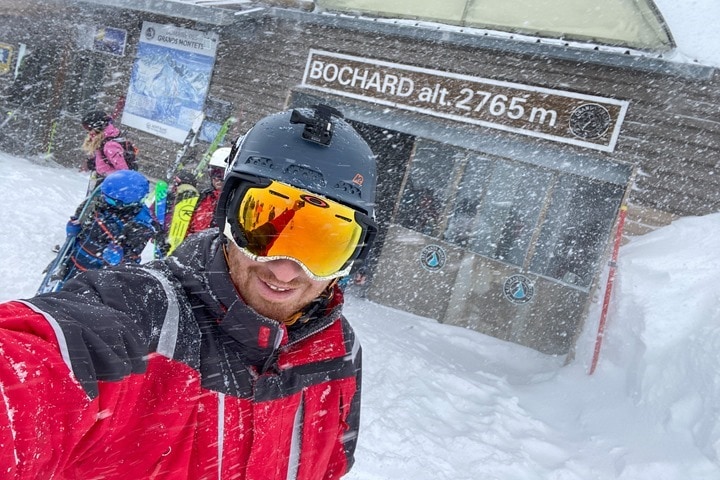 Don’t worry, visibility was perfectly fine. I only saw one person miss a turn, fly over a large ski fence and off an edge. Ski patrol fished him out of that mess a short bit later. 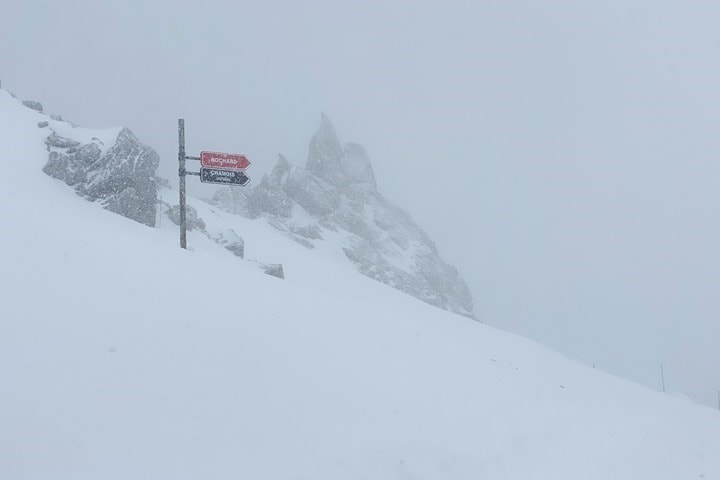 But best of all, nobody was at the mountain: 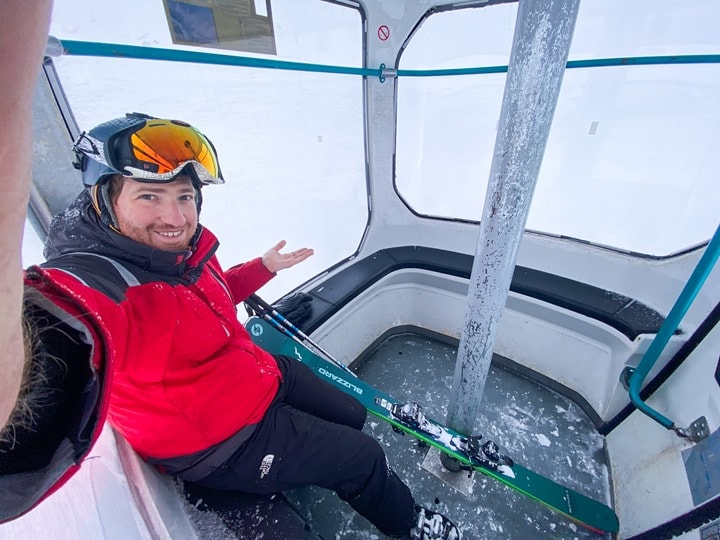 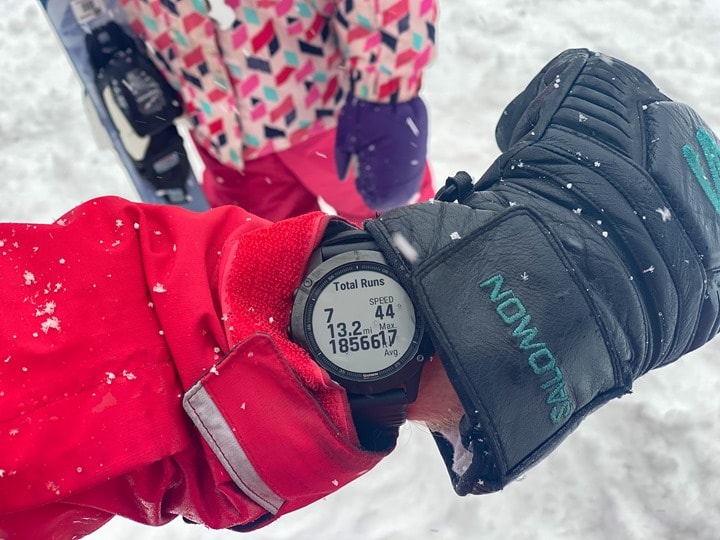 Oh, and speaking of date night – after the kids went to bed each night (or, before, if the day warranted), it was French cheese, baguettes, tartes, and wine time. 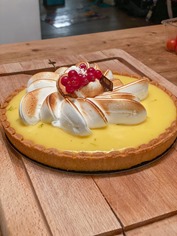 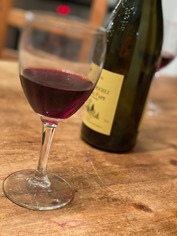 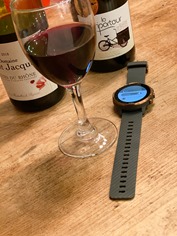 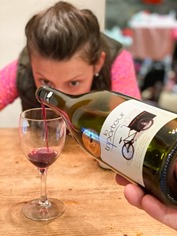 Because you can never have too much French food and wine. The one big thing we miss most, having moved away from France.

As always, I recorded each ski run. I was dual recording with both a Suunto 7 that I was preparing my final review for, as well as a Garmin Fenix 6 Pro. Oh, and just to complicate life, I paired the Fenix 6 Pro to a Whoop 3.0 band for heart rate via Bluetooth Smart. 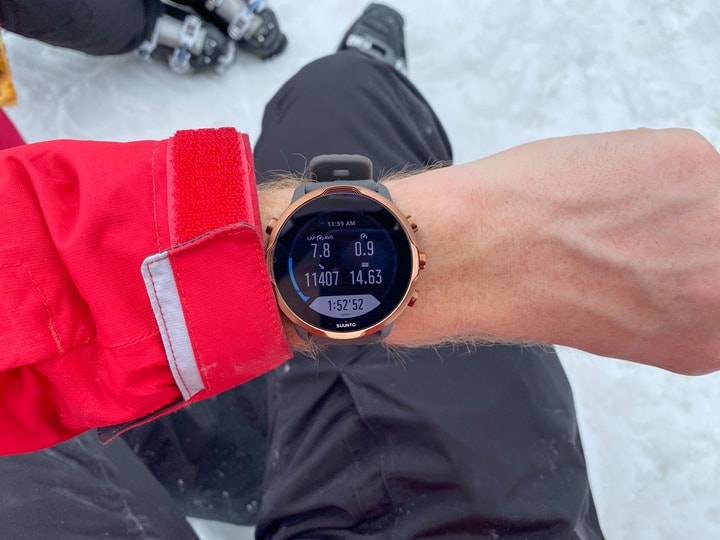 Though, the main gadget I was using was the Garmin, mostly for counting runs and descent. Virtually every Garmin watch made in the last half a decade or so, that has a barometric altimeter in it, has ski mode. It first came out back in 2013.

And frankly – it’s probably the most dependable software feature Garmin has ever made. Seriously, you just set it, lock your watch, and forget it. It’ll automatically track each run (and chairlift ride), including your max speeds, distances, descent amounts, etc… 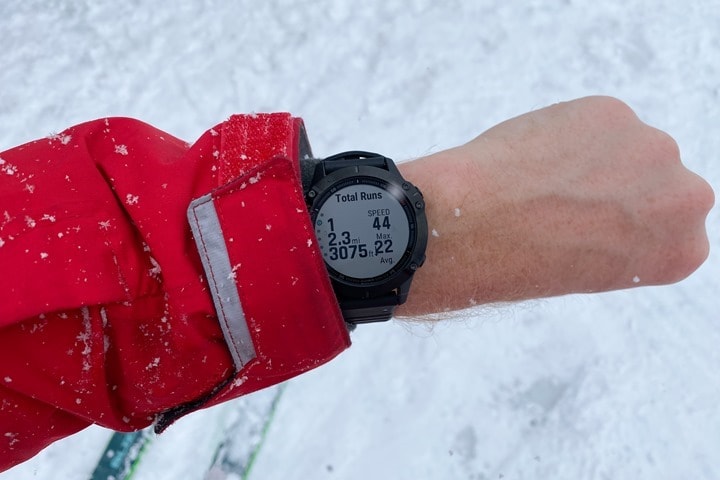 Basically, it’s using the altimeter to determine whether you’re going up or down, and then pauses the activity for it accordingly. Below you can see the named ski runs in blue/red, and my path in there somewhere. I honestly never look at my path while skiing. 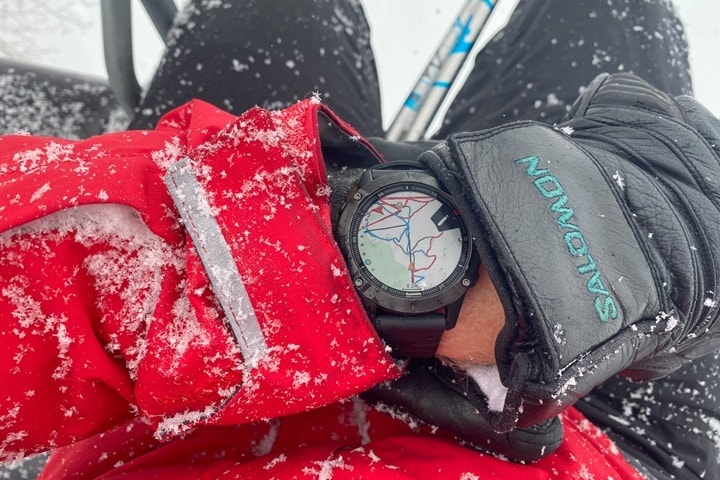 I’m all about the data. Note, all metrics below in statute (MPH/Miles). 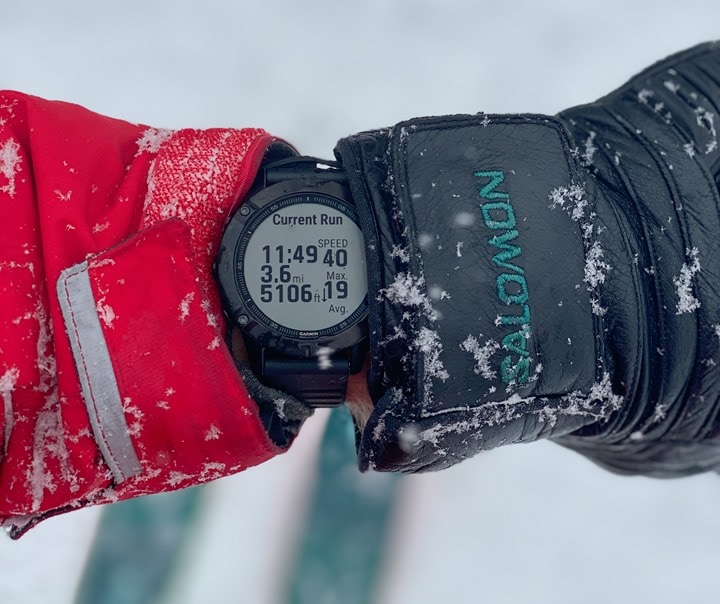 In any case, you’ll end up with straight lines on the map connecting the top and bottom of each chairlift ride (even if the lift technically makes a bend), but then once you start skiing it’ll resume the activity and track the run and related ski/snowboard metrics. 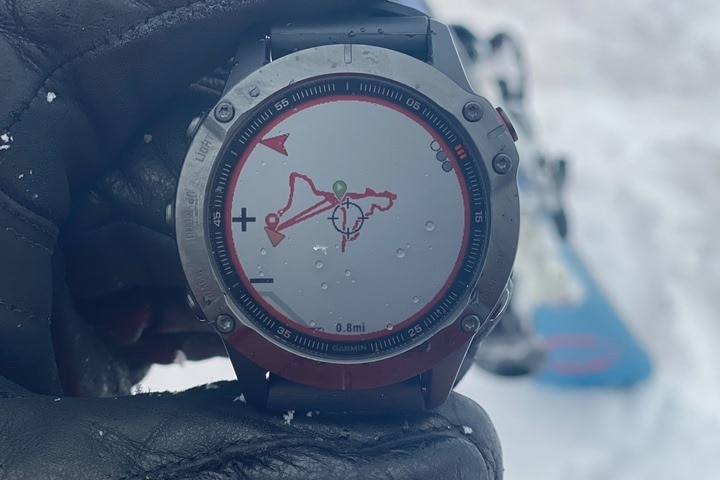 About the only disappointments here really come from the Garmin Connect Mobile side. Sure, it shows your total run stats for the day, but it’s overlaid atop non-winter maps. Compare that to Suunto, which while not having any ski functionality at all, does at least allow me to overlay it atop winter maps and skiing heatmaps (on the device anyway).

Also, you won’t see any ski lift run/chairlift data on Garmin Connect Mobile, again, despite the fact that my watch actually has that data (introduced in the Fenix 6). This seems like such an easy win, and something I’ve asked for in a few different spots since my initial post 7 years ago. Finally, it’s moderately annoying that it only counts my ‘downhill’ time towards the top-line stat. Sure, I get why, but that’s not really how downhill skiing works. Chairlifts, like it or not, are part of most downhill skiing experiences. As such, just show my total time for the day. Thus, if I started at 9AM and finished at 12PM to pick up the kids, that’s 3 hours, not 46 minutes.

Still, as I said before, the on-watch experience is frankly one of my favorite features, and always has been. It’s just so good.

As always I brought an entire bag of audio-video gear with me. Action cams, drones, enough batteries to power us through even the darkest of times, and tons of accessories to test. I used approximately none of it. Actually, I did use my GoPro Hero 8 Black constantly. It was always on me. Though, I wouldn’t say I used it a ton in any wild-Alps style ways.

It’s just that the form factor of the GoPro is so damn good in the snow compared to a phone, especially with gloves, and even more so when attached to the Shorty stick. It slid perfectly into a lower cargo-style pocket on my ski pants, and was easy to grab for quick shots (mostly wide shots). 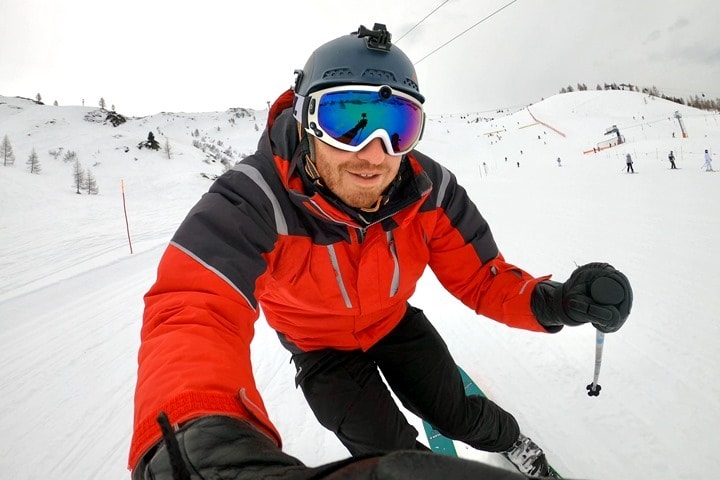 The stabilization was also awesome with the kids, because I was often holding them (or within arm grabbing distance), so my smoothness level wasn’t usually top-notch, but the videos came out amazing.

One thing I did manage to test a bunch was this small little charging door I found on Amazon (note: there are two doors on that page, GoPro Max and Hero 8, be sure to select the right one).

As I’ve noted numerous times before, I think everything about the GoPro Hero 8 Black’s battery door is a giant dumpster fire. Like, wear the t-shirt that you saw in a recent video of mine type dumpster fire. It’s horrendous. And one of the most annoying things is that you can’t easily charge the GoPro on the go. This little door solves that. 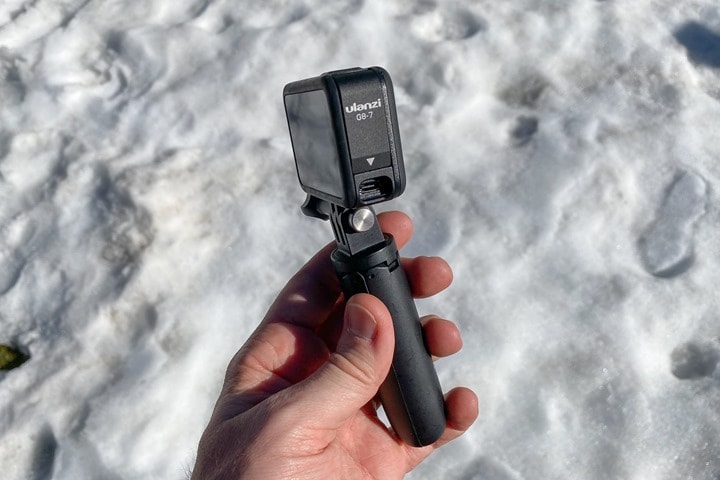 Now, I’ll say right up-front that this isn’t the most perfectly designed door. It works, it does its job. But I wouldn’t give it an award for precision manufacturing. Still, it’s a keeper. It allows me to quickly plug in a GoPro without dorking with the battery door (having it fall off, forgetting it, etc…). Love it.

As for the drones and other GoPro and related action cam stuffs, I guess that’ll have to wait for another time. Shame.

Skiing with The Kiddos: 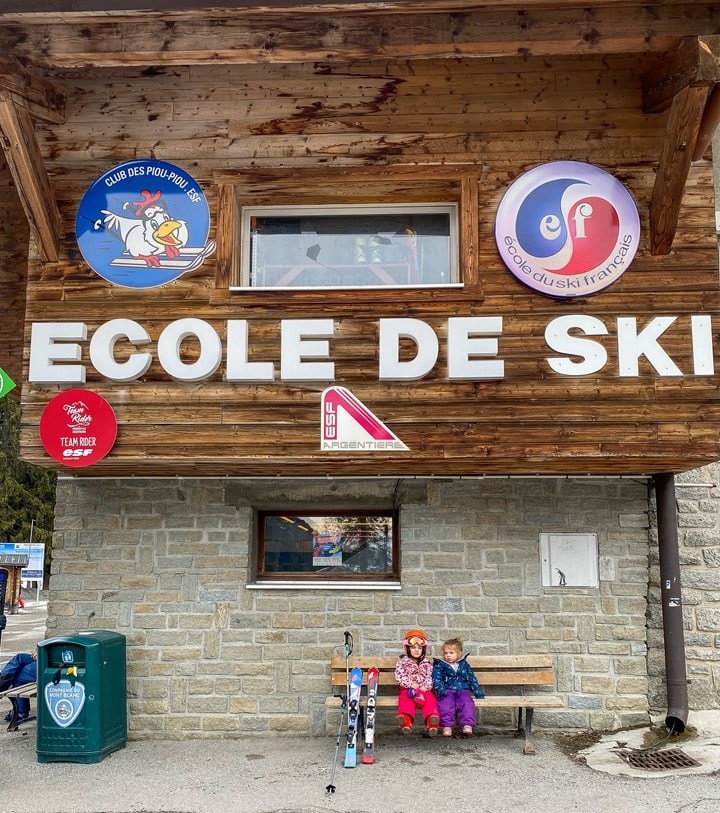 Now, the highlight of the ski trip was skiing with P1 and P2. The Peanut (P1) is 3.5yo, while P2 is a bit over 2yo. P3 slacked off and didn’t ski at all this trip, despite being nearly 5 months. Don’t worry, next year she’ll be ski-bound!

As noted earlier, we enrolled P1 in ski-school each morning while P2 and P3 hung out with a babysitter. Both before and after school we’d ski a bit with her, and then let P2 play on skis a bit as well. 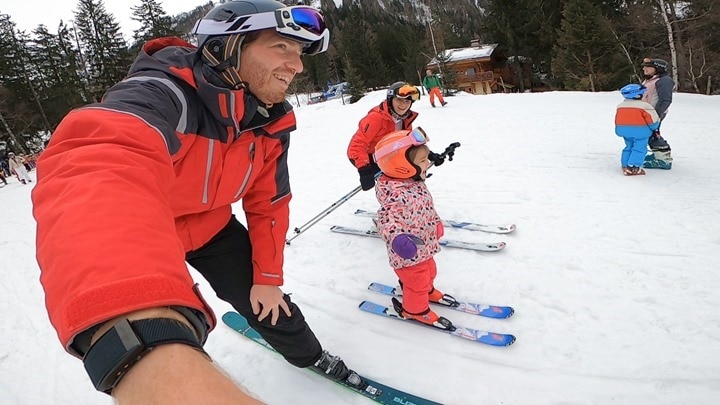 For the most part, their collective skiing was grouped into three buckets:

A) Them pointing the skis straight on relatively tame descents near a large flat area, and then letting gravity/terrain stop them within 30-50 meters (hopefully, or they crash).

B) Me holding them as they skied down a normal run in front of me.

C) Both of us using a child ski harness to allow them to ski in front of us, while we kept them from skiing out of control.

Frankly, method A was the most fun to watch. Both for us and for them. We’d push them up a slight grade, and then watch what happened as they raced each other down the hill. 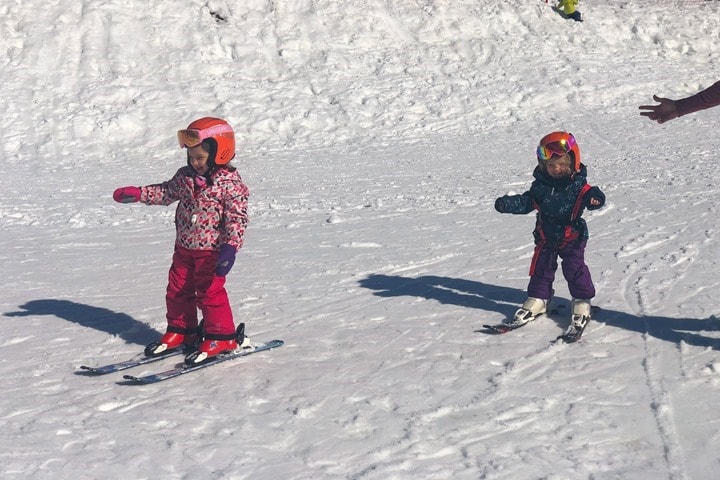 As one who grew up skiing from a very young age (2-3yo), and then raced competitively as a kid and into the teenage years, skiing is a pretty big part of our family. And in general I’m not a huge fan of the ski harness for a variety of reasons (mainly, it doesn’t really force the child from moment zero to understand how to use a snow-plow/wedge to control speed). Still, it does let the child enjoy the concept of skiing, and also does give them skills in other areas in a safe way. 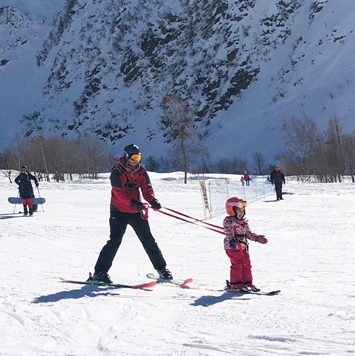 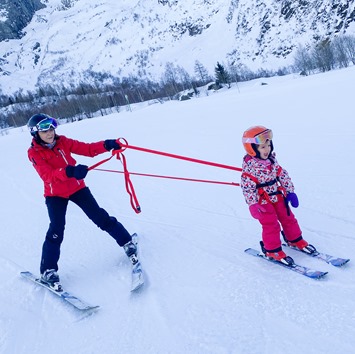 And that last bit is most important – it makes it fun. Our kids were incredibly excited to go up and down the Poma lift (platter lift) endless times until my and The Girl’s back were exhausted from it all. 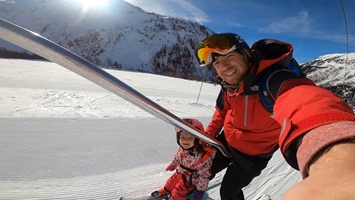 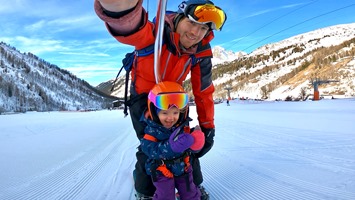 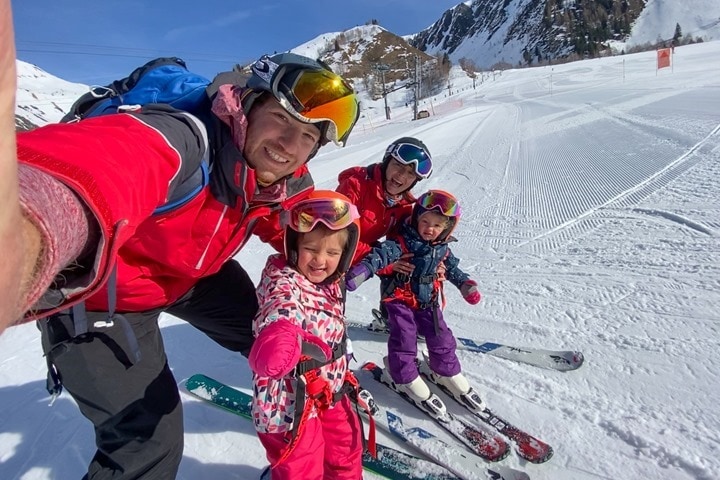 And, from that, they’re looking forward to skiing again as soon as possible. Which is awesome.

What’s even more awesome is that I can even load up the cargo bike and pedal out to an indoor ski facility here in Amsterdam, roughly like the one I went to in Dubai a decade ago (crazy old post there). Might even do that tomorrow with P1. I love the idea that I can pedal a bike with both of us to go skiing. Or, that I can just go skiing anytime. Albeit, the runs are a wee…bit…limited. But hey – we’re gonna rock this flying wedge!