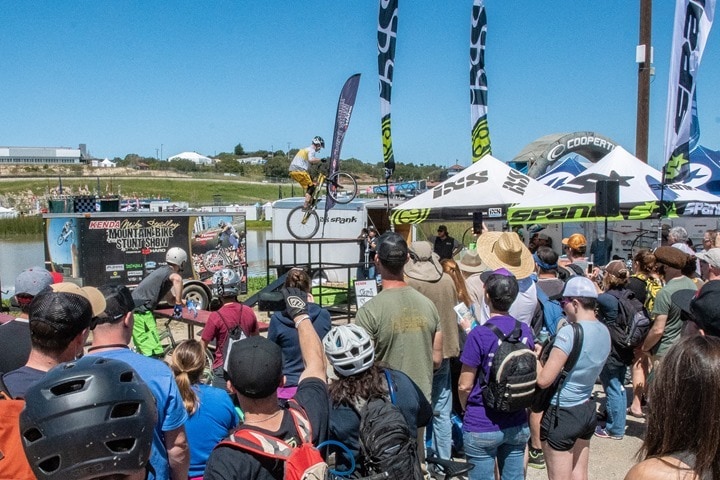 Here’s the next installment of Sea Otter related sports tech tidbits.  As a reminder, here’s what I’ve covered thus far:

Plus all the standalone posts:

Oh, and then some goofing around mountain biking here too.

The next (last?) installment will be shifting towards heads-up displays, notably Everysight, but with a slight side of SOLOS. 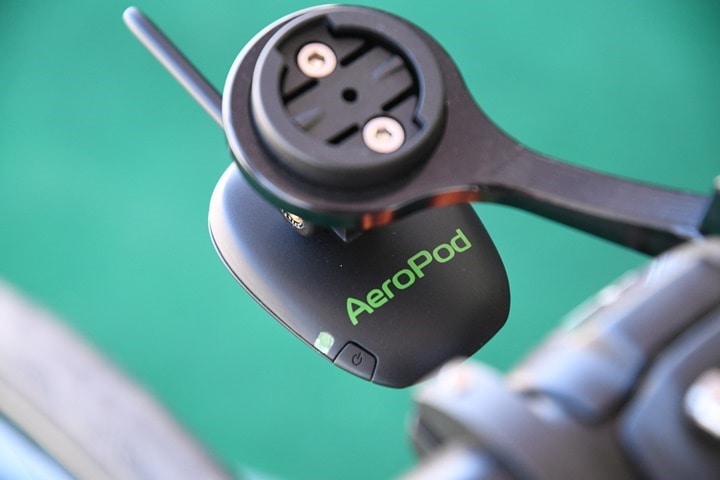 I’m squishing these two together, merely for the fact that I don’t have a lot to say about either that I haven’t already discussed.

Starting with AeroPod, you can read my full post on it here from last week, but what was notable at Sea Otter was seeing in person the new pod design. My test pod was like an existing PowerPod externally (internally it was different).  So here’s what the new AeroPod looks like in real life. 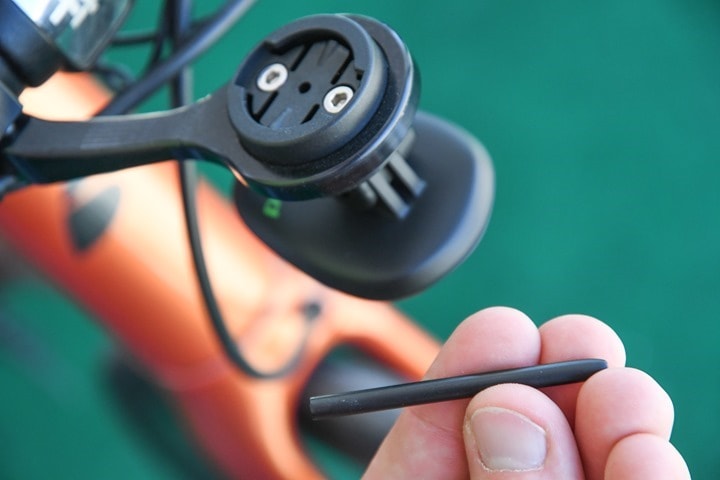 In general, it’s smaller than I anticipated.  Also, the pitot tube is removable, which is smart for things like transport and such so that it doesn’t get broken off.

Note that this particular unit doesn’t have any guts, so it’s not something I can test yet…that’s coming soon.

Speaking of coming soon, is the Notio Konect. They had on hand what were pretty close to production quality units.  These felt really nice and well built. Cool to see them coming along. 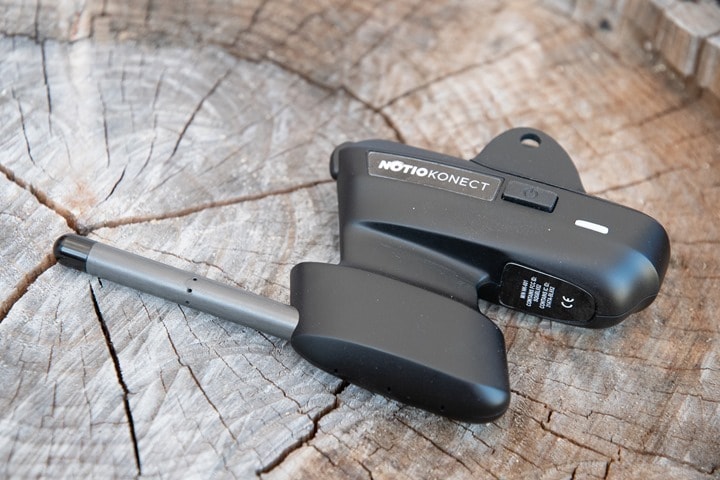 While it powered on just fine for it, I couldn’t measure CdA sitting on a faux-wood plastic chair under their booth. Instead, that’s slated for sometime in May hopefully, with them looking to ship in August. 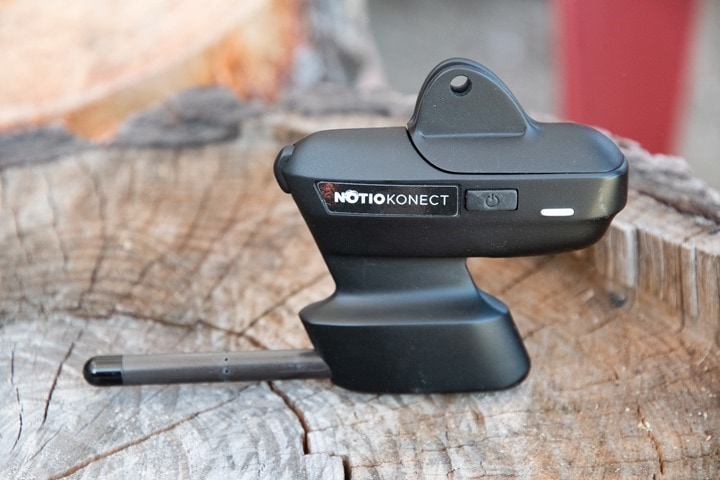 Note that they still plan three levels of aerodynamic focused units – ‘Pro’, ‘Enthusiast’, and ‘Beginner’.  The one you see above is the Pro variant, and is slated to be in the $1,000 range.  The Enthusiast could very well be the same hardware, just different software functions – some of that is still to be decided/announced (including final pricing). 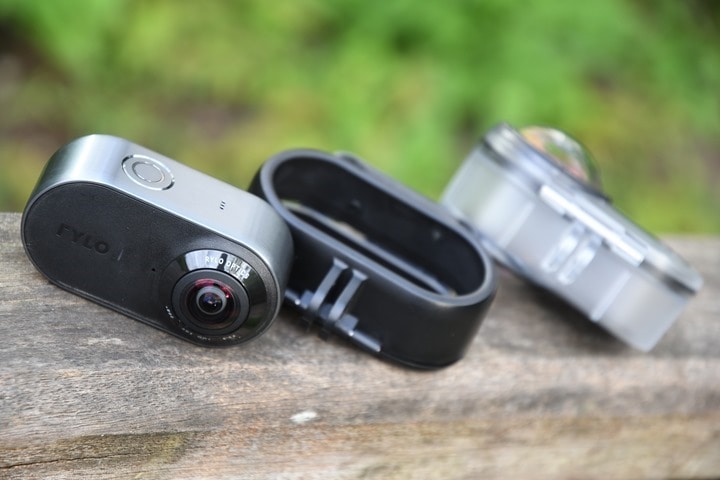 I did a small handful of Rylo cam stuff last November/December when it was first announced, as I had an early unit then. I even posted the short little video below explaining how it works:

The challenge was in January when I went to wrap up my In-Depth review, that unit stopped updating (apparently slight differences to the absolute final production units), so I couldn’t get new firmware updates including some new features and fixes.

Thus I had it on my to-do list to buy one so I could wrap up the review.  They were at Sea Otter, so I swiped my Amex (and got some hotel points), and then immediately discarded almost all the packaging in their booth so I could get out and ride. I ended up mostly just shooting hand-held. Here’s a short unedited clip, just 2-3 sample bits spliced together.

Note, the hand-held bits below are using the underwater case, since you can see I had the non-underwater case atop my handlebars.  Unfortunately, I had locked that case in using a hex wrench and couldn’t get it off the handlebars mid-ride.  So you see some reflections below due to it that wouldn’t otherwise be there.

In any event, I got some video off-bike too which I’ll edit up at some point so I can finally wrap up that review.  In many ways I think the Rylo cam is the best 360° camera that’s not a good 360° camera.  By that, I mean that while the Rylo can shoot 360° footage, that’s not what it’s good at. Instead, it’s fantastic at shooting everything and then doing some impressive software work to give you a ‘normal’ (non-360°) video including ‘cinematic’ shifts through the scene and object tracking (like you see in my very early demo video above).

Looking forward to pushing out this review…anyone got any more hours in the day I can borrow? 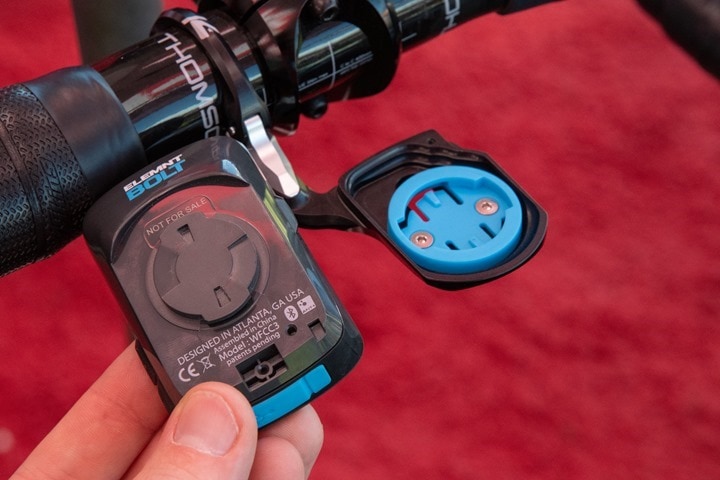 Next, we’ve got a quickie – a new mount from K-Edge, the Wahoo Aero Mount by K-Edge (yes, that’s the official name). Essentially it simply takes Wahoo’s form-fitting sorta aerodynamic mount and makes it machined metal. 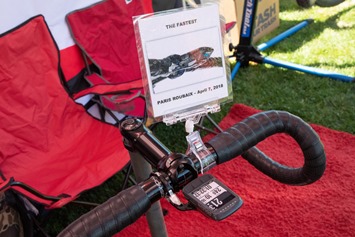 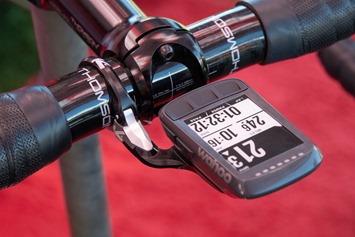 You probably saw it a few weeks ago in Paris-Roubaix as well, though, it wasn’t announced yet at the time.

One minor thing to be aware of is that the mount isn’t compatible with mount accessories, such as a GoPro mount. 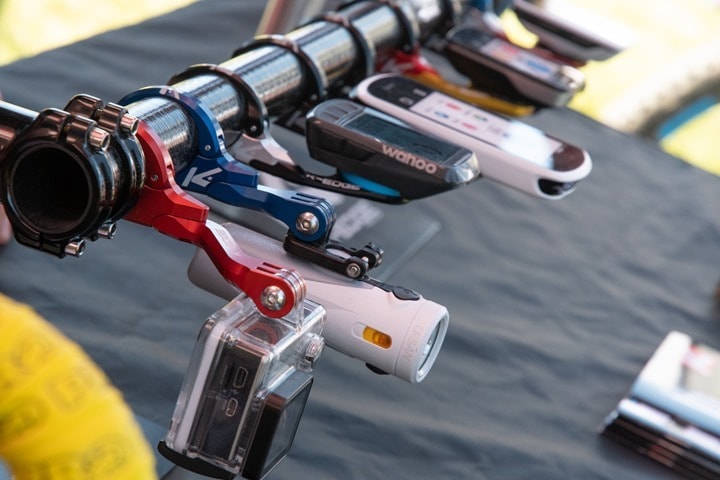 Now you may be wondering why you care about adding a GoPro to an aero mount, but as K-Edge noted – a lot of people have already asked for it.  Primarily because those same people (normal humans) don’t usually buy a collection of mounts for different rides.  Some rides they might take a GoPro, and perhaps other rides attach bike lights or light/camera combos.  And then of course, a ride or two they might wanna be marginally more aero without anything.  The company says they’re working on an accessory-compatible variant, but they don’t have a timeframe for it.

In any case, the new mount will set you back $69 and is available immediately.

There were a couple of bike inflation products that I stumbled into that were worth briefly noting (though I don’t usually get too into this category).  The first is one on Kickstarter, which is a small foot pump that’s really aimed towards the mountain bike crowd, the Stompump.  It compresses down and fits easily on your frame, but can then still pump up your tires to about 60psi. That’s definitely well below typical road tire pressures, but well above mountain/off-road tire pressures. 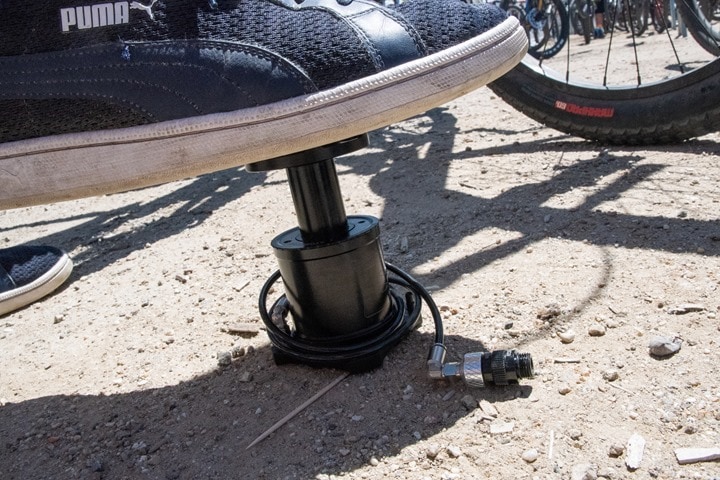 The maker is actually one of the original founders of the Barfly mounts (Tate Labs), though he’s since sold off his share of the company to go back into inventing things (as you see above).

Another inflation product is the MilKit Booster.  Also definitely aimed towards the mountain bike crowd, though technically would work really anywhere. Essentially you pump up what is basically a fancy water bottle ahead of time to the desired pressure: 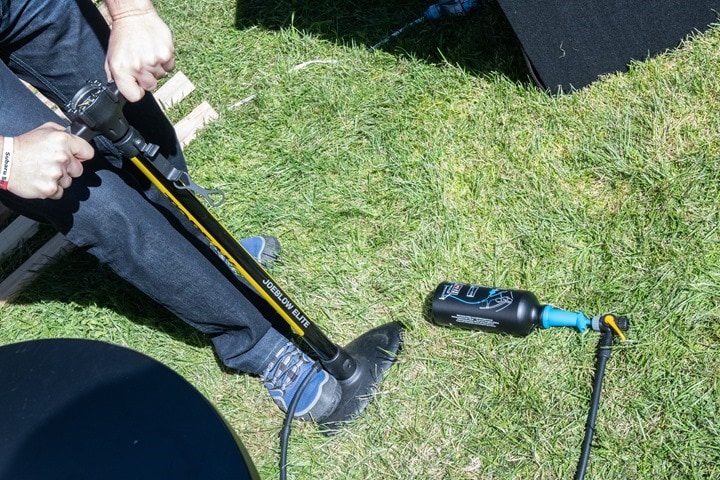 Then, you can attach that directly to your tire valve with a flat tire.  That’ll inflate your tire in approximately 1 second. It was a pretty darn impressive demo to watch. This reduces the need to have a pump or CO2, and can give you pressure up to 160PSI (far more than a mountain bike would need of course).  The downside is obvious though, you’ve gotta carry around another bottle.

Given you can inflate up to 160PSI, it could likely be shared among a group of folks – so if you were doing some sort of longer ride with friends it might be more practical. I suppose given it launched fairly successfully on Kickstarter last fall – there definitely appears to be an audience for it. 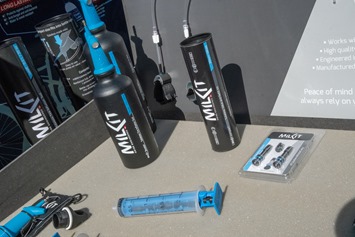 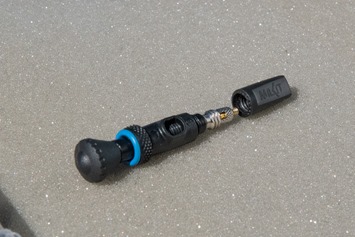 They’ve also got valve cores that don’t let sealant spill out when you deflate the tire. As one who dealt with sealant spilling out each time I moved the TyreWiz to different bikes, this would have been moderately useful. That then gets into their sealant measurement system too – but that’s a bit out of the realm of things I tend to focus on. 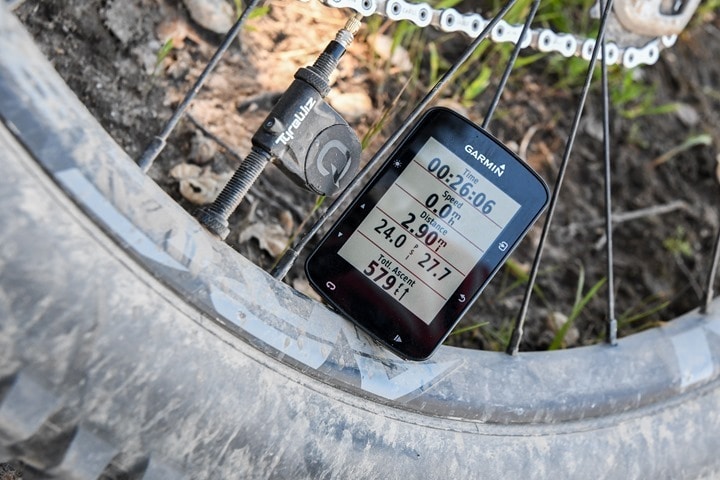 Now, now for something new-new, since I covered this product last week. But I thought it was actually quite notable to see the slightly different reaction I got to it at Sea Otter in person, versus online.  In the comments on my post and video last week, people fell into roughly two camps with respect to TyreWiz: They totally got it, or they thought it was highly stupid.

And in some ways, I can understand why. It’s expensive and it just shows tire pressure.  But I probably didn’t help things in that I’m primarily a roadie/triathlete, and not so much an off-road person (not due to lack of desire however, I wish I had mountain bike trails around me).

Nonetheless, the product is probably most valuable within the off-road variants, mountain biking and most notably fat bikes.  And this became painfully obvious to me within seconds of starting to install it at Sea Otter (which I did with my demo bike leaned up against a table on the main walkway). First off – everyone noticed it.  And second, everyone kept asking where I bought it.

Less you think people won’t notice them on your tires, your mistaken. Anytime my wheels weren’t spinning fast and I was paused somewhere, mountain bikers would look down and ask about it. Be it on the trails or near the parking lots.  What was more interesting to me though was that the reaction wasn’t “What are those things?”, but always some variant of “Wait, where did you buy those? Are they available here?”.

After my first bike loaner (I was rotating through demo bikes), I stopped by the Park Tools booth (which included stations to fix your bike) to borrow/use a valve remover since I forgot the one included in the TyreWiz package at home.  As soon as the Park Tools guys saw what I was doing they were as excited about the sensors as if I had just given them a 6 pack of beer.  One mechanic gathered the rest of the guys (and random customers nearby) over and proceeded to have me jump up and down on the bike while they watched the air pressure in real-time.

Now, what’s funny here is that this sorta thing actually doesn’t happen to me all that often – despite constantly having new gear of various sorts on my person or bike.

And as for peoples thought’s on the pricing? They were split. I’d say about half the people I chatted with didn’t seem to mind the current $199 cost, whereas half said something like $99 would put them within insta-buy category. Especially those with fatbikes, where tire pressures are super carefully watched, primarily in changing weather conditions.

I did chat with Quarq a bit more about the pricing bit. They noted their struggle was figuring out demand for such a product. If the demand was low, then their production cost was higher. And they simply didn’t know if the product would be a success or a bust.  They also noted that the pressure sensor they selected is of a higher quality. Obviously, I don’t have a bill of materials to validate that, and that wouldn’t really account for distribution margins and such.

Oh – and a funny related story.  In order to get TyreWiz pressure data onto Garmin Connect before the product launched, Quarq created a fake app…that was actually real under the hood. They created a simple countdown timer app that counted down randomly to the date/time of the TyreWiz launch. 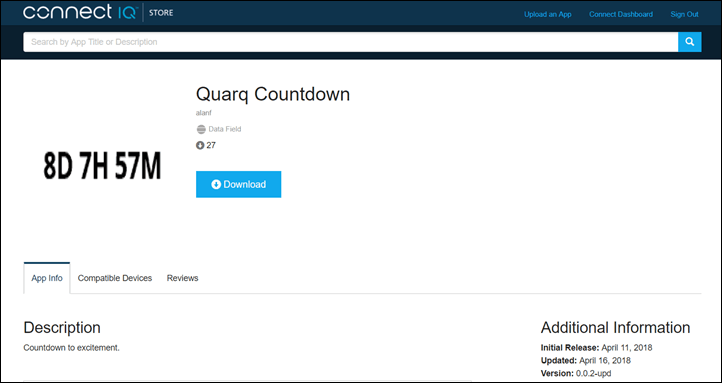 If you downloaded it, you just got a random countdown timer.  But…if you were within range of configured TyreWiz sensors, then it magically connected to them and started recording data. Here’s data from one of my rides (note: temp data is from Edge, not sensor):

In any event, I thought that the TyreWiz bit was kinda interesting and figured I’d share it.

With that, thanks for reading – one or two more Sea Otter posts to go…hang in there!