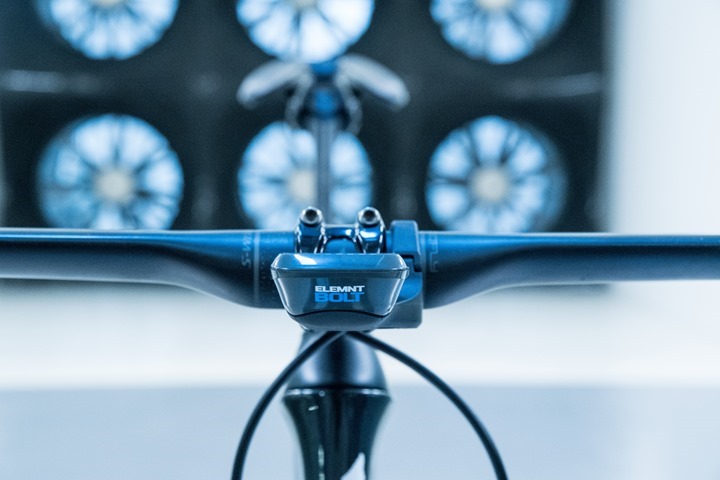 When it comes to companies making marketing claims about all sorts of devices, most shy away from specifics.  They’ll use terms like ‘better than’ or ‘faster than’ – without numerical qualifiers, or they’ll use other terms that imply greatness but stop short of giving you concrete details.  In most cases, that’s because it protects the company in case someone finds a way to call them out on being incorrect.

So when Wahoo made two specific claims upon launching the Wahoo ELEMNT BOLT earlier this year, I immediately started plotting on how to put them to the test.  Specifically, they claimed two core things:

Those were pretty specific claims, which can be found on their website and in a slightly more detailed blog post of theirs: 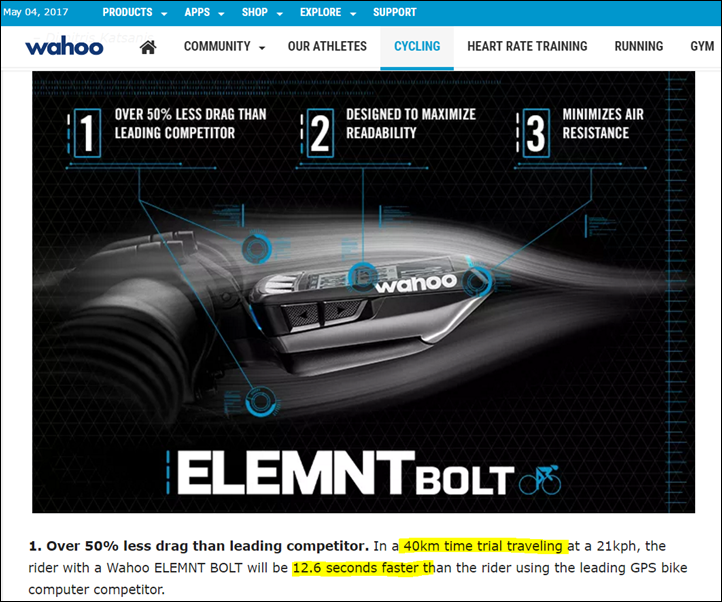 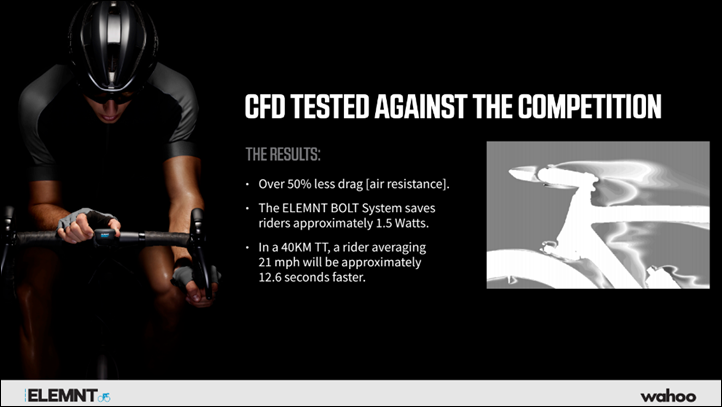 The above screenshots were taken on May 4th, 2017, though the wording Wahoo has used has remained consistent since launch in numerous documents (their website, press releases, media kits, etc…).

Wahoo argues that their new mount is designed for the BOLT and thus designed to be more aerodynamic out of the gate.  So this is as much a test of the entire mount/computer as it is of anything else.

The real question is – is all the above true?  Well, I set to find out.  On the way to the annual Sea Otter cycling event this year I took an early exit off the highway to hit up the Specialized Wind Tunnel.  We’d test all the most popular bike computers out there and see if the claim holds true.

The below video covers everything from end to end: What we tested, how it was tested, and the results.  It’s like this entire post in one nifty audio video extravaganza:

Video not your thing? No worries, continue on! 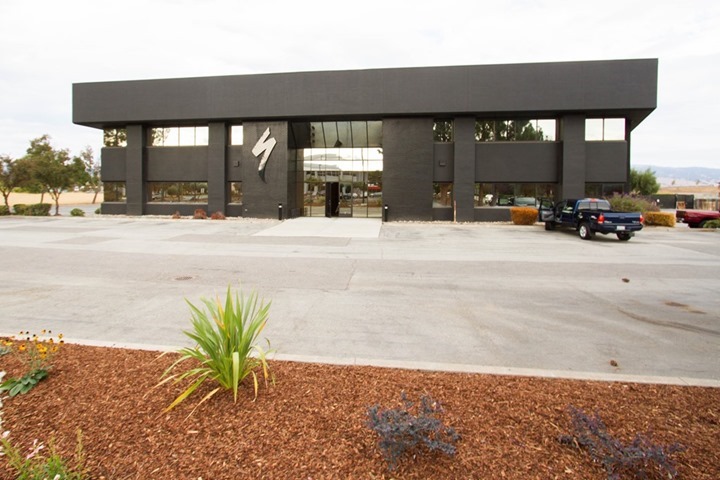 As noted above, the test was done at the Specialized Wind Tunnel, about an hour south of San Francisco.  Technically it’s called the ‘Win’ tunnel, and not the ‘Wind’ tunnel…but…ok.  This is actually the second time I’ve been to the tunnel; the first was about 18 months ago when I did a similar spate of tests.

Rather than re-doing the massive behind the scenes section I did within that post, I’ll just refer you to that bit of awesomeness here.  I cover how the tunnel works, and all the coolness within it. 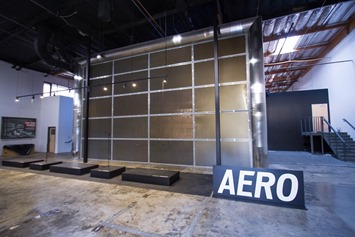 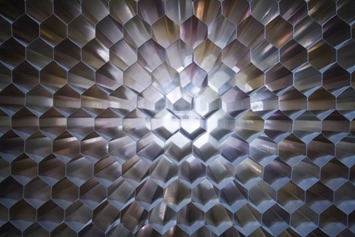 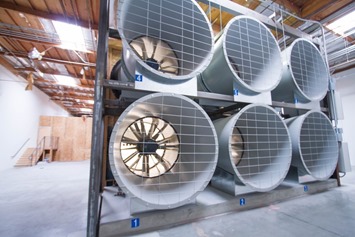 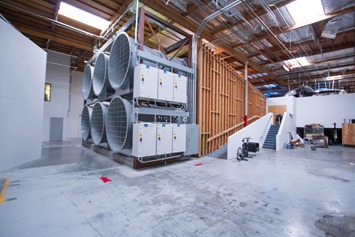 Very little has changed since then in terms of the tunnel itself – so all of that still applies here.

Do note that in the case of Wahoo’s claims, they actually didn’t test in a tunnel. Rather, they worked with Dimitris Katsanis of Metron Advanced Equipment to perform the tests within computers using CFD (Computational Fluid Dynamics).  There’s nothing wrong with that per se, but the reality is that it’s not…well…real.  Metron’s own site explains a bit on how they do this.  Which isn’t to say it’s not valuable – it certainly can be.  But since Wahoo paid Metron to do these tests, that makes our visibility into those results limited to what Wahoo decided to release. 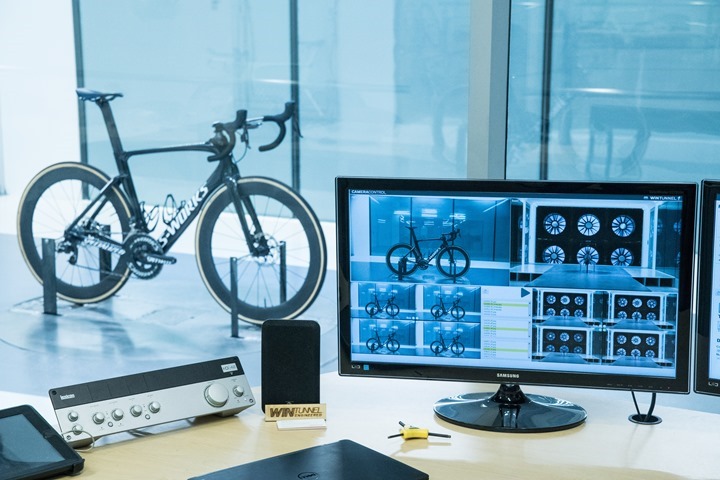 At the media event back in March they noted that the ‘leading competitor’ was a Garmin device, but didn’t specifically call it out at the time.  So in order to ensure I covered all the possibilities, I brought a crapton of units into the wind tunnel: 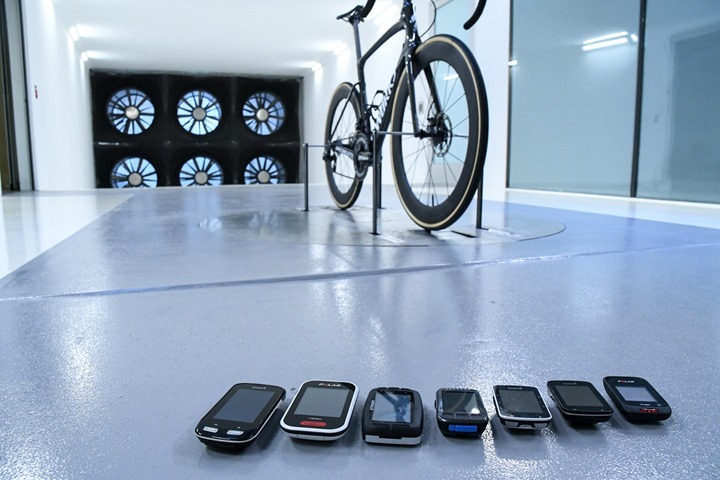 Prior to doing the test we didn’t know that the results were based on the ‘stock provided’ mounts, meaning the things that came in the box.  This meant either the out-front handlebar mount or the rubber-band mount (such as on a bar stem).  So we brought all of those too. 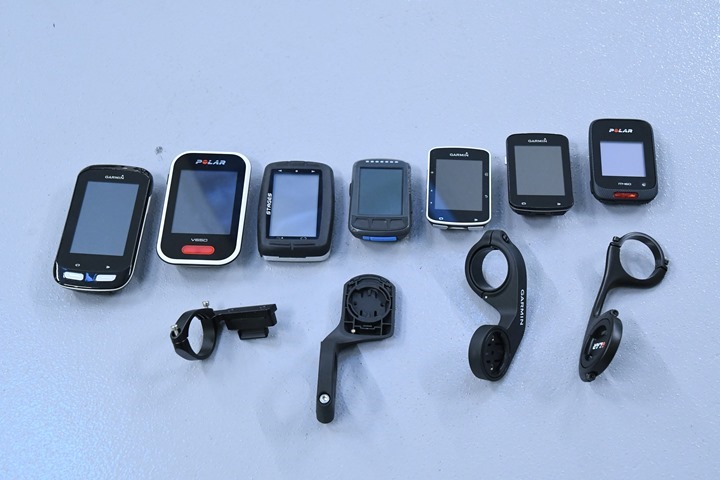 In total the following units were tested, all with their stock mounts:

Next, the bike. Specialized provided the bike, which was set up to be pretty darn aero.  The components are listed in the report from Specialized below: 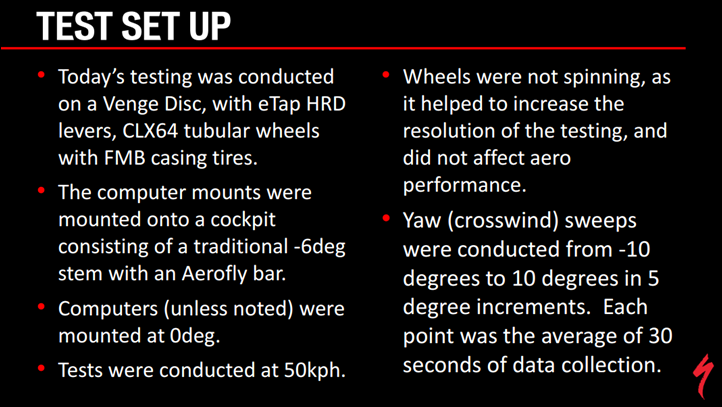 Then there’s the on-bike and tunnel setup.  Prior to starting the test, we did three runs of the bike in the tunnel without any bike computers on it.  This was to ensure a consistent baseline and that the tunnel had stabilized.  The platform that holds the bike automatically moves to provide a number of yaw angles during the test.  Each test run includes tests at the following yaw angles: 10°, 5°, 0°, –5°, –10°.  Yaw angle means how offset the bike is compared to the headwind.  This nifty little 46-second video from last time shows how the whole thing moves:

For all of the bike computers, we placed them at 0° to the ground, meaning perfectly horizontal.  If you remember back to last year’s post on this, it was actually a really big deal that the units were flat.  When tilted upwards, it was a huge penalty in terms of aero.  We initially wanted to use a physical level to do this, but the smallest level we could find was a meter long, making it impossible to use on the bike mount.  Instead, we just used a phone app (which we double-checked against the physical level too). 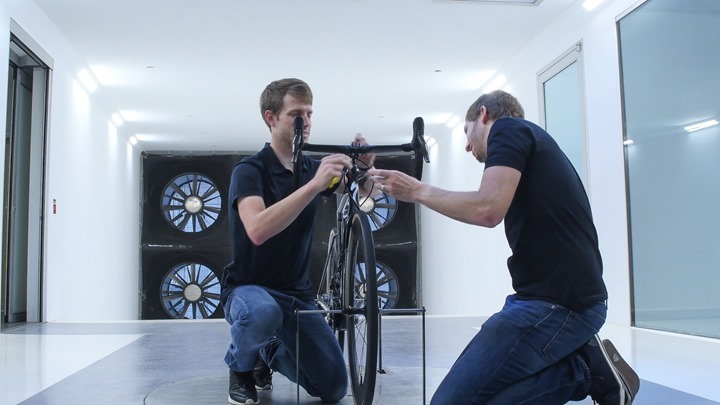 In the case of the Wahoo ELEMNT BOLT, we actually did three tests:

We did the last test at the end of all testing, just to ensure the results were consistent.  Again remember that for each bike computer we did multiple yaw angles (to simulate a crosswind).

Finally – some will ask why we didn’t use a rider.  The reason is simple:  The tolerances/differences we were looking at here are just so darn small that adding a rider wouldn’t likely be consistent enough test to test to ensure valid results.  Further, in the case of this specific test (an out-front mount), a rider is unlikely to impact the test results.  Whereas if you were testing helmets or some other component of the bike closer to a rider, it may.  Additionally, a rider would likely impact all these items equally, so it would cancel out.

Also – we didn’t spin the wheels (though it’s possible).  The reason is that doing so would reduce the accuracy of the test data, as it impacts the force sensing plate a bit.  Given we wanted the most accuracy possible and given it would likely have no impact between each of these units – it was excluded.

The overarching theme to remember coming out of the setup section is this: The differences between each mount were expected to be incredibly small, and thus we needed every last ounce bit of accuracy in the ‘full tunnel system’ in order to measure them. 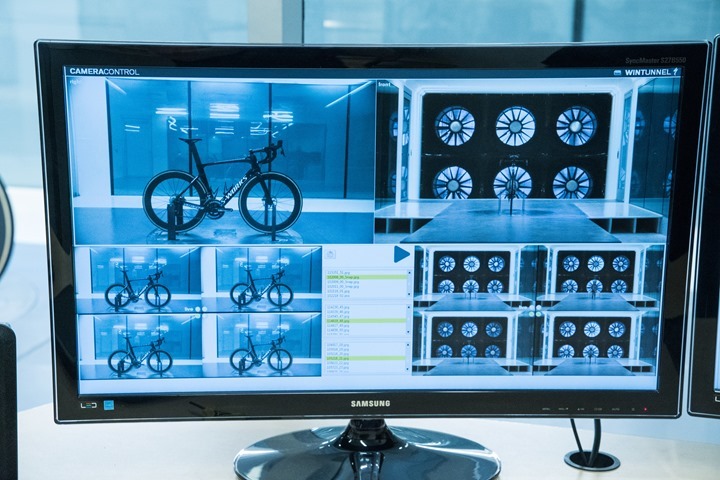 Since watching wind move through a tunnel is actually really boring (Pro Tip: You can’t see anything), we’re going to jump straight to the results.

First up is how each unit fared compared to the bike by itself.  The taller the graph column, the more drag the computer is producing (increasing CdA – the Drag Coefficient and Area).  But really – do keep in mind that these differences are astronomically small: 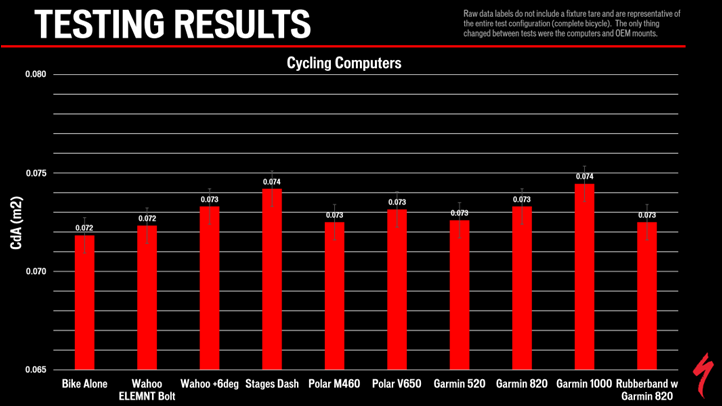 So as you can see right off the top of the bat – the Wahoo BOLT is actually imparting the least amount of additional drag over the base bike alone.  So, that’s a good start to their claims about being faster than the competition.

Speaking of which – going into the tests we didn’t actually know what exactly the competition was.  When I had asked various Wahoo folks previously, they declined to provide an exact model.  But after the test I followed up again and got them to spill the beans and confirm it was indeed the Garmin Edge 520 in the stock (provided) out-front mount configuration.

Notable take-aways from the above chart is that the Edge 1000 is the slowest (something we somewhat already knew from last year).  Also, you see the rubber-band Edge mount configuration on the stem is actually faster than the out-front mount.  This is because it ‘hides’ behind the stem a little bit, taking it out of the wind.

So let’s dive into the main claim – which is that it was 12.6 seconds faster than an Edge 520.  The below chart compares everything against the baseline of the Edge 520 with an out-front mount at 0-degrees flat (shown below in the center-right at ‘0’): 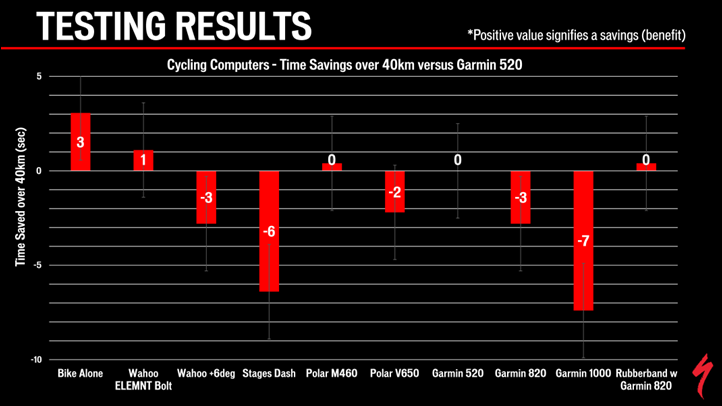 And this gets to the meat of their claim: Yes, the Wahoo ELEMNT BOLT is faster than the Edge 520…but it’s not 12.6 seconds faster.  It’s 1 second faster.

In discussing this with Wahoo a bit more after the test, they pivoted slightly to claim that it was really the Edge 520 at 6° up versus the Wahoo BOLT at 6° up.  Their thinking being that most people turn up their bike computer mounts to make it more readable (which is true), and that the BOLT is more readable at 6° up while also being just as aerodynamic.

And in fact, there’s some truth to that second claim.  For example, you can see that the BOLT tested at 6° up is equal to that of the Edge 820 while flat.  And we know from last year that increasing the drag upwards could see 4-8 seconds of increased time (or decreased, depending on how you look at it). 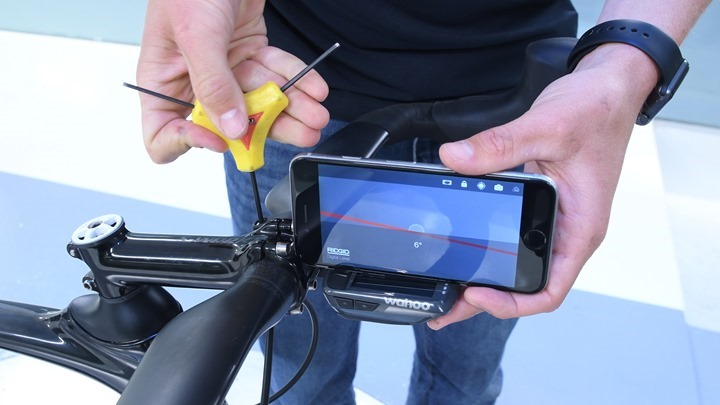 But really – all of this sidesteps something that a few people have wisely brought up: It probably doesn’t actually matter.

Well, because quite frankly nobody is doing a time trial on a road bike.  They’re doing them on time trial/triathlon bikes.  And those have a dramatically different set of conditions.  Even further – Wahoo doesn’t even make a BOLT aero-specific time trial bike mount for its computer.  So in many ways all of this is for naught.

Which isn’t to say there aren’t aero advantages on a road bike, of course there are. But as most of us know, it’d be incredibly rare for this to make any meaningful difference in a road race given the dynamics of pack riding.

Further – the differences here are really just very very small.  I wouldn’t get too caught up in one unit being a few seconds between the Edge 520 and Wahoo BOLT.  And even if you compare against the Edge 1000 or Stages Dash (closing in on 10 seconds slower) – you end up back in the same conundrum of whether or not it matters in a road race.  But, that’s for you to decide.

To Wahoo’s credit, it is clear that if you tilt up your bike computer – then the BOLT does indeed save a fair bit of time.  There’s very little penalty on the BOLT for doing so, whereas we know from last year it’s considerable to do so on the Edge (or any other bike computer).  Their integrated mount system and overall design does seem to help considerably here.

With that – hope you enjoyed!  And thanks as always to the Specialized crew (Cam Piper in particular) for their time in letting me take over the wind tunnel for a morning.  Their playlist here of all their test videos is awesome for aero geeks.  Further, you can find the full PDF report here with all of the data in it, as well as below in a mini-gallery:

(P.S. – In case you’re wondering why we did or didn’t test XYZ bike computer as well, this was mostly about choosing the most popular ones out there, plus some uniquely new ones I just happened to have with me – like the Polar M460 and Stages Dash.)