Despite August being the time when most Parisians vacate the city, we’re still here.  Although, we’ve moved a bit.  More on that in a moment!

I headed out Friday evening prior to dinner to do a bit of a run around Bois de Vincennes.  I occasionally run here on my longer runs (since it’s about 3-4 miles from our apartment), as you can burn endless miles within it.  There’s plenty of running events that use it, and you can pretty much run a half-marathon completely inside it without repeating yourself.  I suspect with enough creativity you could also do a marathon.  But I lack that much creativity. 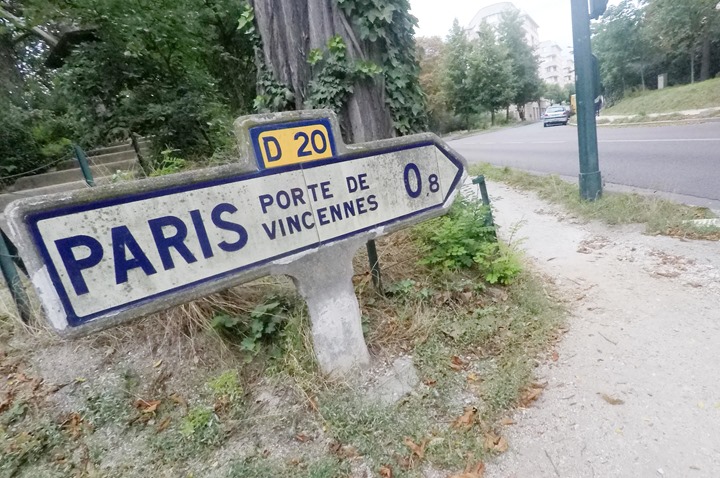 I made a simple circuit, which included the chateau towards the end of it.  For this evening’s run I was mostly focused on figuring out a path that I could run with the stroller if I wanted to, so I just kept things on relatively easy terrain/paths. 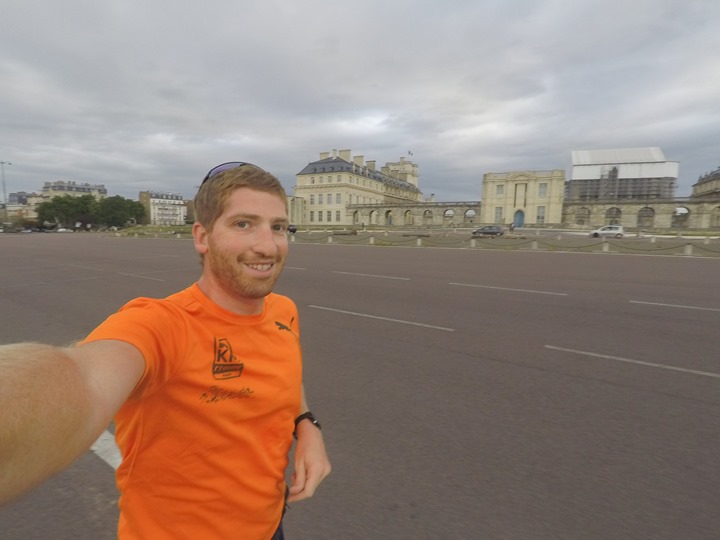 Whereas for my next run I’m going to do the opposite and try and find more of the single-track style trails that exist.  I’ve run some of them in the past.

Still, it’s one of my favorite parks in Paris in part because it’s just so darn big.  For comparison, NYC’s Central Park is 843 acres.  Bois de Vincennes? 2,459 acres. Boom!

Oh, and as always, testing some new stuff.  But more on that…when that happens.

2) Firing up the grill

At this point you may be wondering where I got a grill.  Or space for a grill for that matter.

Well, I still officially own neither.

But, our friends have gone back to Canada for August, and we’ve decided to occupy their mind-bogglingly amazing home on the other side of town (still in Paris).  A home that includes an amazing terrace and a grill.  Oh, and room for a tiny inflatable pool for The Peanut.  And air conditioning.  And it’s super modern and all-around awesome-sauce.

Actually, first we went out to Costco to pick up goods, much of which was centered around meat.

No, we didn’t take home those cows.  Instead, the ones inside. 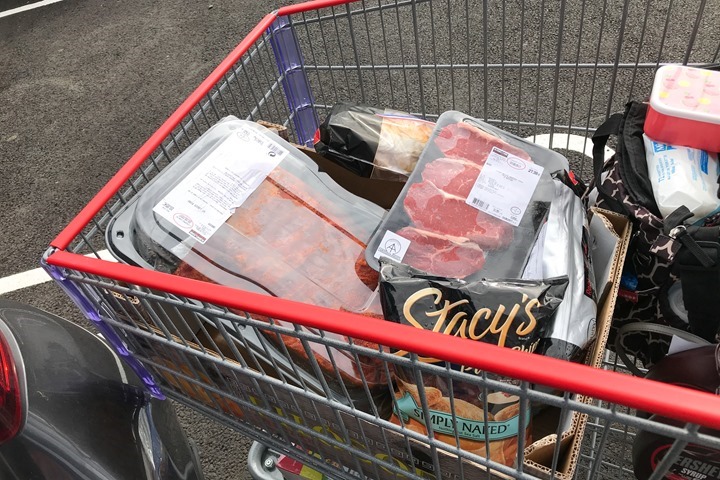 Then we grilled.  We did steaks, and ribs, and more steaks, and hot dogs, and…more stuff I can’t remember.  After The Peanut went to bed we enjoyed a quiet outdoor dinner on the terrace…every night. 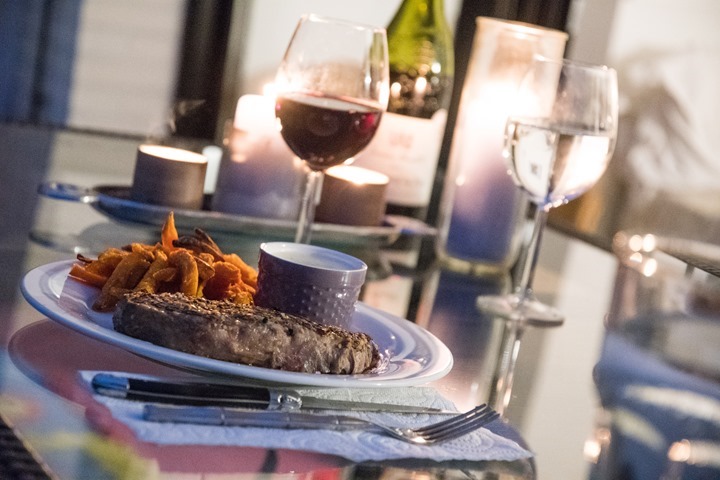 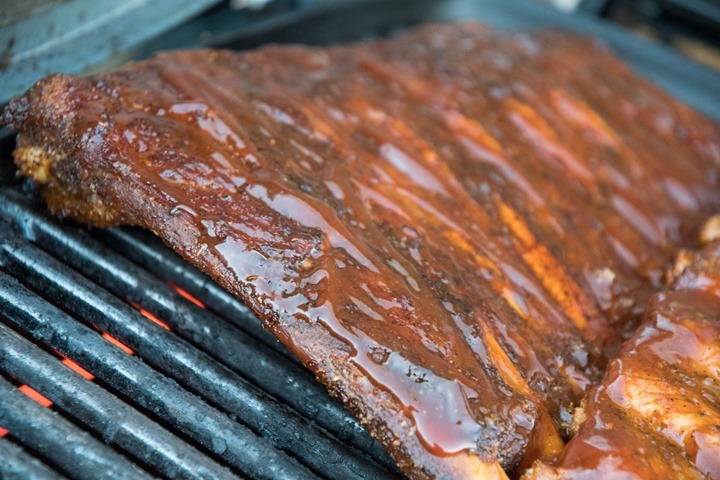 I did the ribs for about 3 hours inside in the oven, and then on super-low heat for another 30-40 minutes outside on the grill. 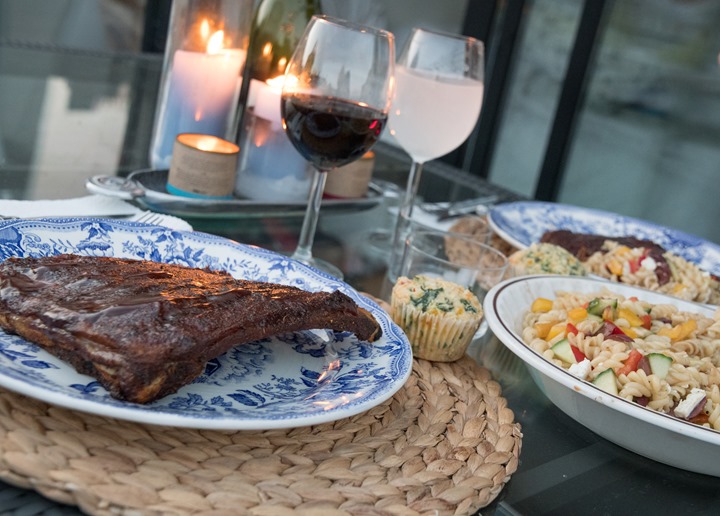 3) Roaming the forest and the castle

With the park so near, it’s nice to just wander in the forests.  We headed out Saturday afternoon for one such wander.  Except, I didn’t take many photos unfortunately.

We ended up walking about 10KM or so, with both The Peanut and Lucy.  Lucy, of course, would get tired every once in a while and take a ride in the stroller.  Slacker.

And inversely, The Peanut would get bored every once in a while and want a ride atop me: 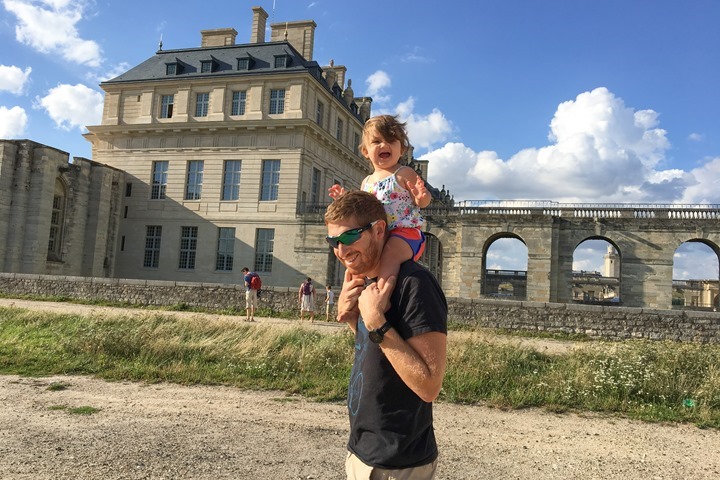 And so it goes. I’m not sure how many miles I walked with her atop my shoulders, but it was definitely a non-zero number.  And annoyingly I get no step credit when pushing the stroller.

4) A Sunday Ride of Indecision

I couldn’t really decide where to ride Sunday.  With the park a mere 5-7 minutes away, doing loops on the section closed/dedicated for cyclists was an option.  But that’s not really a ‘good’ weekend long ride.  That’s just loops, and that should be reserved for weeknights or other periods of boredom.  Meanwhile, I actually don’t know any good/great routes heading eastwards out of Paris. Virtually all of my countryside routes are heading westward out of Paris.  And all my past eastward attempts have ended…less than awesomely.

Sure, I could follow the river trail, but that’s not really good for road riding – especially on a weekend in the summer.  Far too packed with slow moving and unpredictable pedestrians.

So instead I ended up combining the two looping parks into one gigantic city loop.  I did a few loops first at Bois de Vincennes near me, and then I crossed the entirety of the city to do a few more loops at Bois de Boulogne. 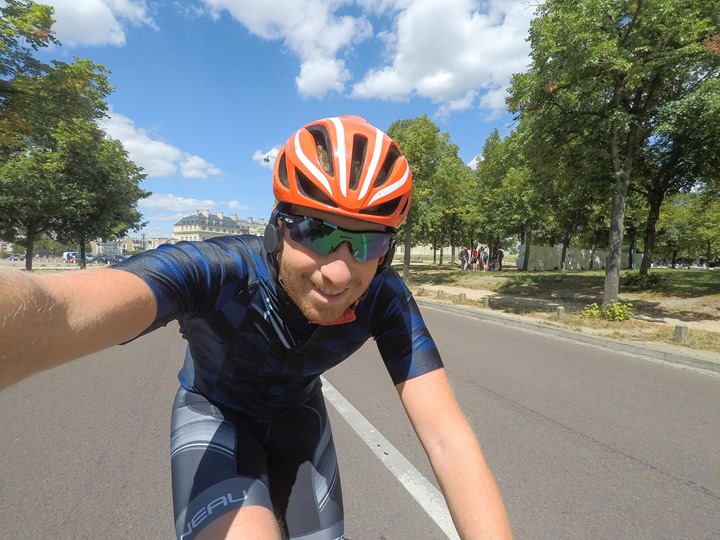 It kinda worked.  And astoundingly, I got about 90 minutes of pretty steady riding in there, largely due to a lack of vehicle traffic in the city.  Near Longchamp there was some sort of rollerblading endurance competition going on.  They had a timing clock up showing 3 hours and 30 minutes. 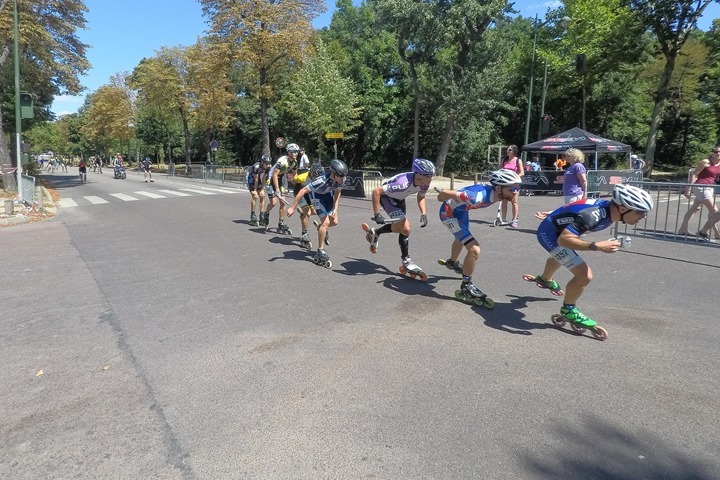 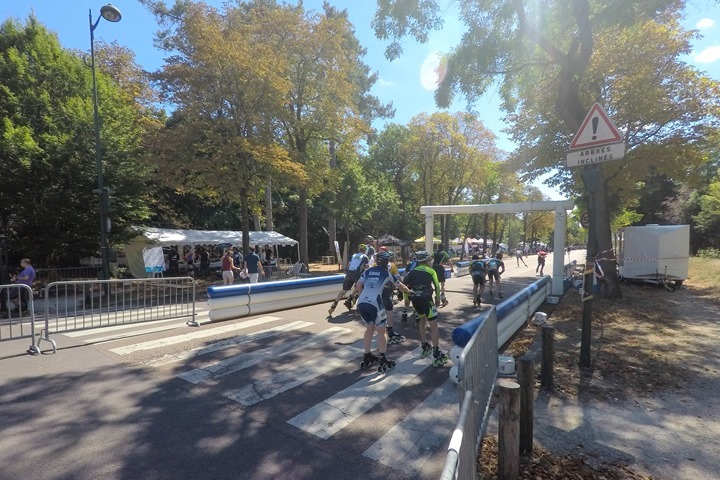 On the way back, the Champs-Élysées was closed to cars for its monthly Sunday closure for pedestrians/cyclists (sorta like this).  I could have ridden down it as well, but that meant taking the bike through the security checkpoint, and there was already a bit of a line.  Plus I’d probably have to explain why I had half a dozen head units, three cameras, and more with me. 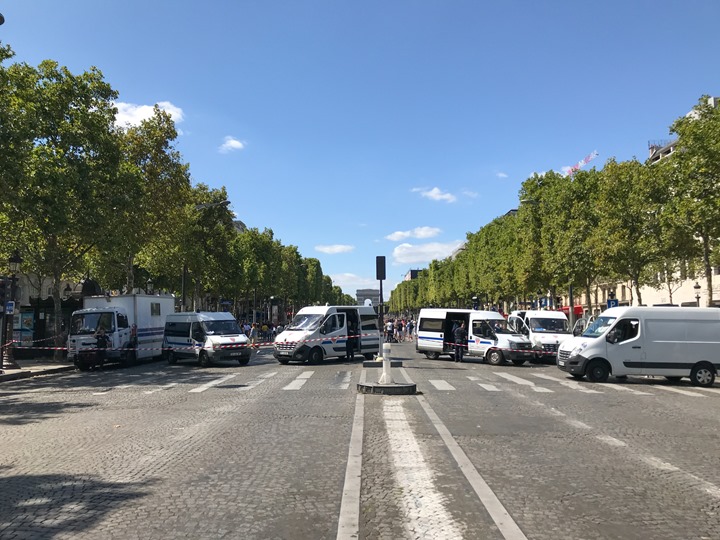 So instead I just looped around it before crossing the city the rest of the way back to home.

If you’ve got any suggestions for eastward routes that are quiet country-ride type stuff – I’m all ears!  Totally open to one-way routes where I take a train back, too.

Our friends’ rooftop terrace is fabulous.  It’s got plenty of sun and again, the grill.  Except all that sun was becoming quite hot for The Peanut, being you know, directly under the sun.  We tried to arrange a shade using some sheets, but on the 3rd attempt of that making Caspar out of The Peanut, we decided to go get an umbrella.

So while The Girl was out for her workout I took The Peanut down to the hardware store.  It’s not far away – about a kilometer on the walking/running/cycling trail.

Interestingly, when you walk in the front door of the store, they actually have bikes you can rent to carry goods back.  We’re thinking of renting one just for the fun of it one day. 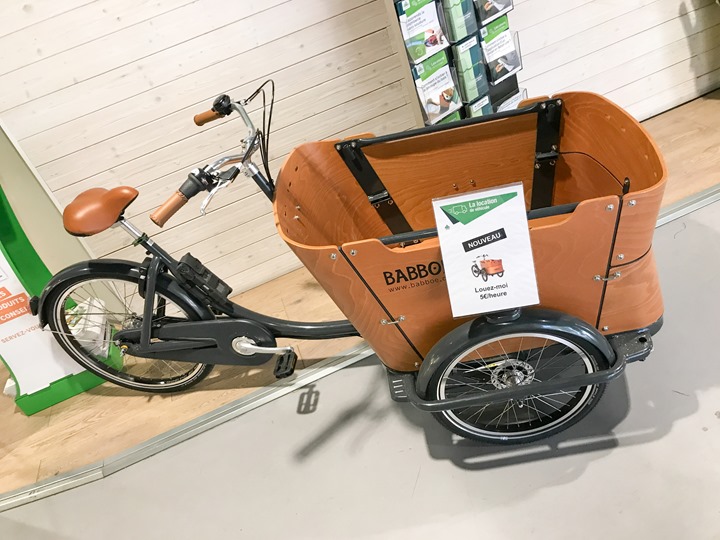 In any case, I soon found the umbrellas.  And by plural, I mean there was a pile of umbrellas of exactly one model to choose from.  39EUR, which isn’t too bad for a big 3-meter wide wooden and cloth umbrella.

The only trick? Getting it back home. I hadn’t really thought through this part yet.  But soon I had a solution!  Just after the checkout stands they had twine and a large assortment of cutting tools.  For future reference, none of those scissors or cutting things were somehow sharp enough to cut the twine. I had to use a saw. Seriously.

Before long though I had a missile launcher attached to The Peanut’s stroller. She didn’t look thrilled about the addition. 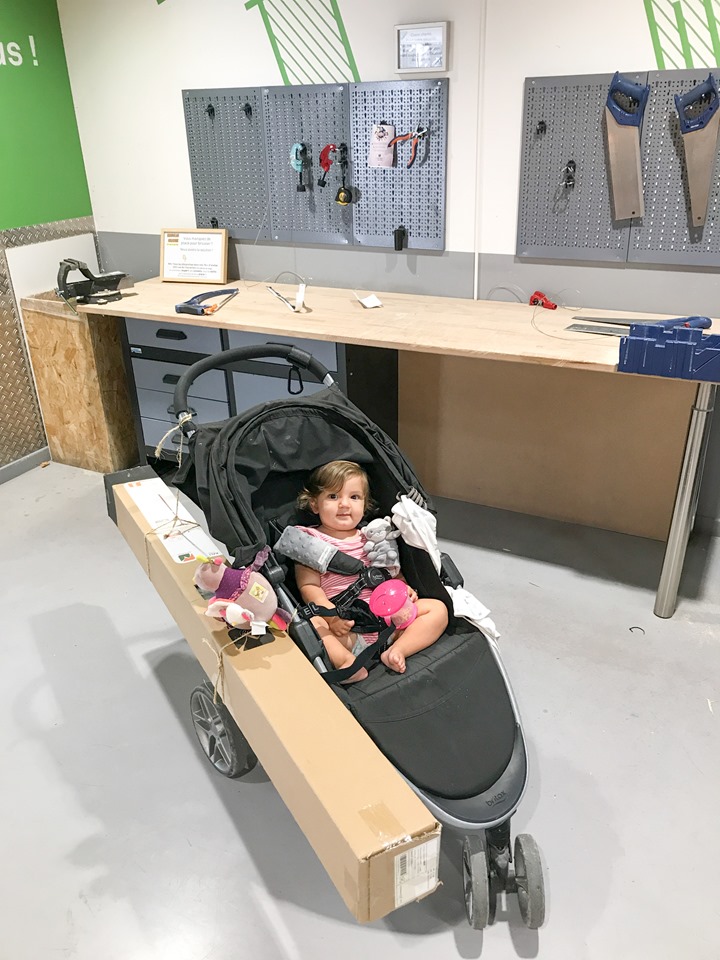 I was ready for business.  As was her chicken: 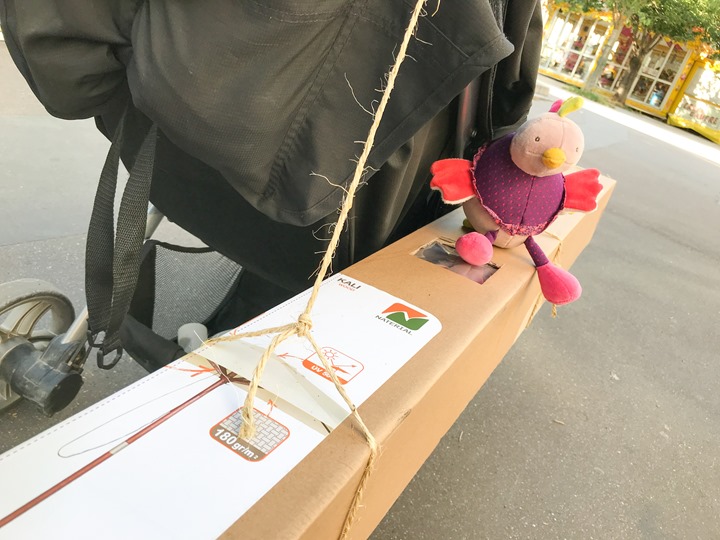 People gave us some odd looks – though not as much as I’d probably have received in the US.  Folks here are used to creative methods to get things home from the hardware store.  The closer you are to one, the more crazy and whacky things you’ll see. 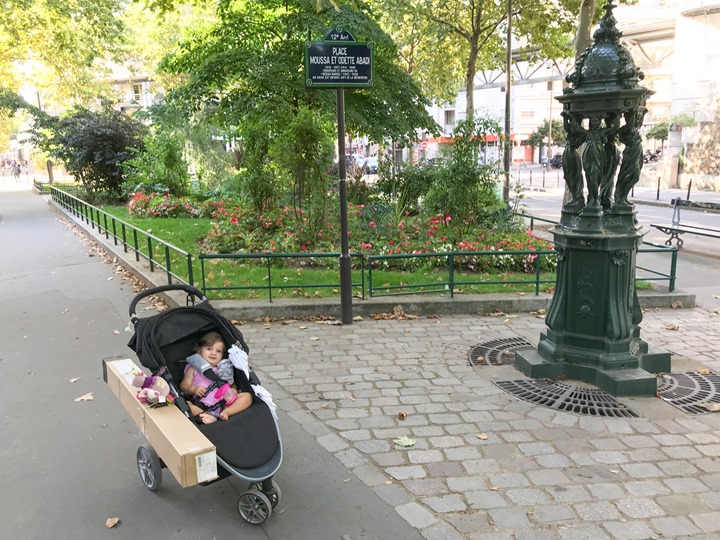 As an aside, my second brilliant move of the day was using my running Spibelt to strap her little cup of Cheerios onto the cart so she doesn’t throw it overboard.  The Cheerio cup is actually called a ‘snack trap’, and it makes it a bit of challenge for her to get the snacks out (or spill everywhere). Also: It’s how we get through 12-hour transoceanic plane flights frequently (she flew over 30 flights in her first year).  Pure magic.

Also totally suitable to fill with M&M’s and have it slow you from eating them too fast. 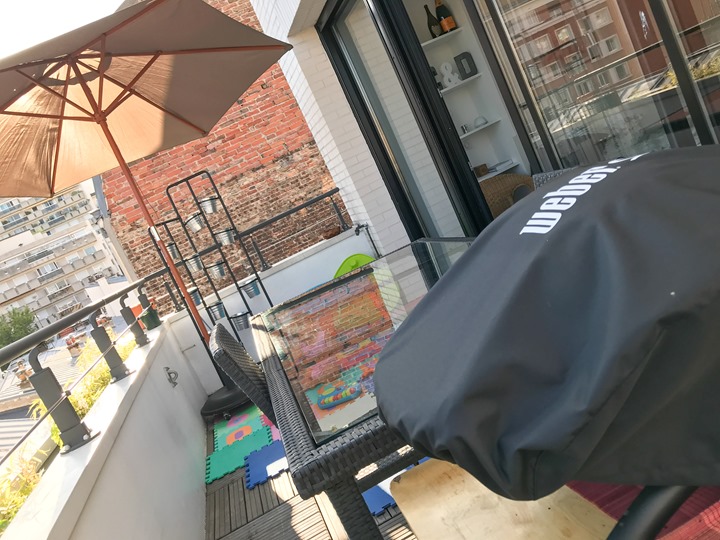 In unrelated news, about 8 minutes after I got the umbrella setup we got a text back from our friends that their umbrella was located in the basement.

Oh – and don’t forget the Giveaway Extravaganza on Wednesday!!!!