With The Girl and the Peanut (and Lucy) out of town this weekend, here’s what I was up to

I kicked off the weekend with a 5PM (my time) DCR Q&A live stream.  This would last a bit over 90 minutes, and include some 240 questions. Yikes!  You can watch the whole thing here. 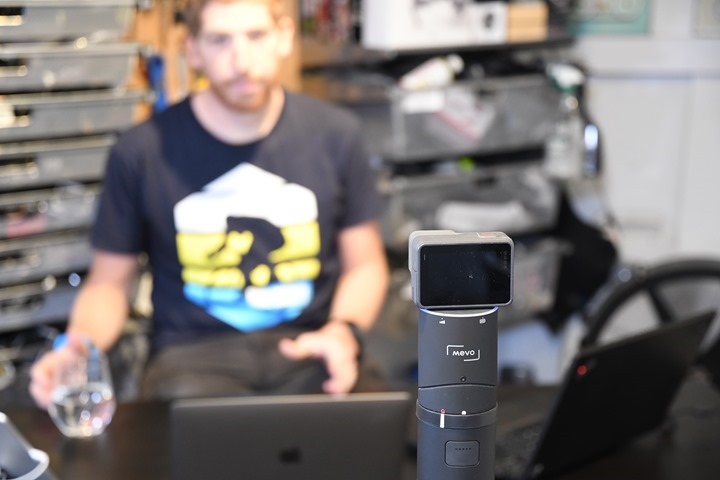 To talk tech for a second, like last time, I used the Mevo camera to do the live streaming.  Though unlike last time I went with wired mics (this one).  Also, I didn’t use any automated camera angles.  Just wasn’t worth it.  It really is a shame that Facebook has such low-quality live streaming options (720p), compared to YouTube (maxes out at 4K/60fps).  While Mevo can’t do that high quality, I’d certainly consider buying a dedicated camera to get higher resolution streaming.  The only challenge with most of my DSLR’s is that they stop recording at the 30-minute marker.  So gotta find some better options there.  I’m sure Google will help me.

Oh – and yes, you see a GoPro sitting atop it.  My plan was to also record a legit HD copy using that, even just 1080p in a medium crop.  But, I hatched this plan approximately 90 seconds before starting the live stream.  And the only batteries I could find were half-dead.  And then when I tried to use continuous power from the Mevo (it has an extra USB port for that), it wouldn’t leave USB-mode.  So no go…fail.

As for why using Facebook over YouTube?  Well, simple math really.  I’ve got 70,000 Facebook followers, versus ‘only’ 40,000 YouTube followers.  Adding to that, almost all of those 70,000 people have the Facebook app loaded, versus a much smaller amount of YouTube followers may have the app loaded (random swag numbers).  Thus, both in terms of reach and people likely to get the little ‘ding’ that says I’m live.

As for doing both concurrently?  That’d just be asking for trouble, like drinking from two fire hoses at once! 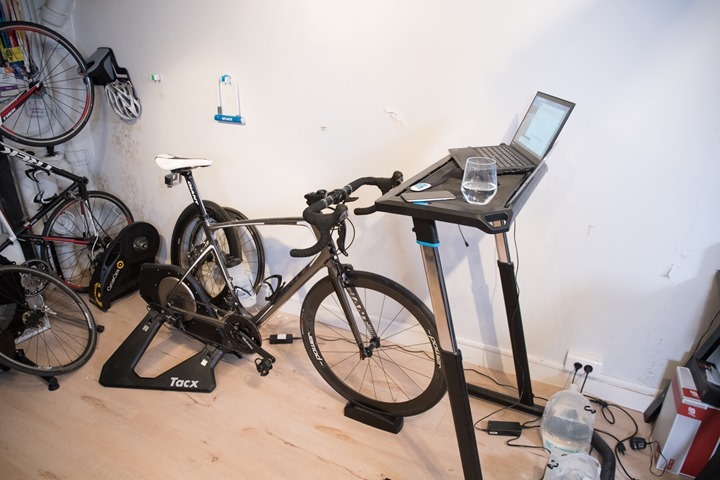 Now before the live stream I finally got around to unboxing the Acer Xplova bike head unit.  It includes all your bike navigation goodness, plus a 720p camera, 3G connectivity.

It’s roughly the same size as the Edge 1000, and actually uses a Garmin compatible mode.  Somewhat hilariously, they duplicated the default/stock Garmin Edge out-front mount (except ‘flipped’, to use on right of centerline instead of left of centerline).  Every last detail is identical.  Personally…if I were to blatantly copy someone’s mount, I’d choose either Barfly or K-Edge. 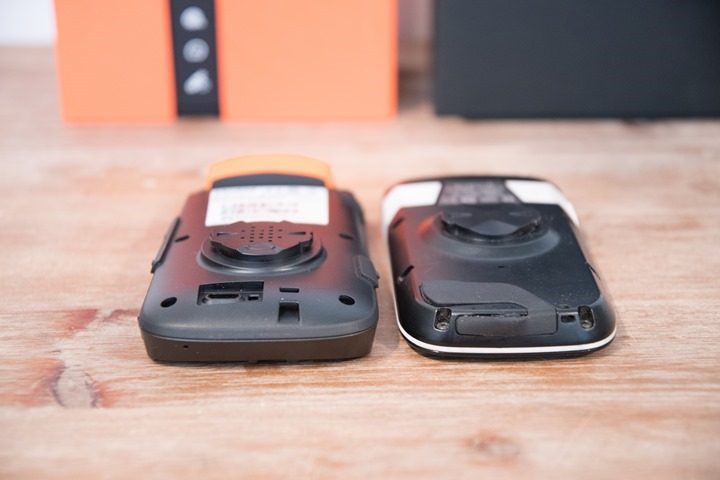 In any case, after the live stream concluded I jumped on the bike, including the first use of the unit indoors.  In case you’re wondering why there’s liquid on it, I dumped some water on it from my glass to see how it’d work (touchscreen).  A bit latent, but mostly fine.  As for why I’d use a glass on a trainer instead of a bottle – I just moved it from the table after the live stream.  I didn’t think through it until afterwards. 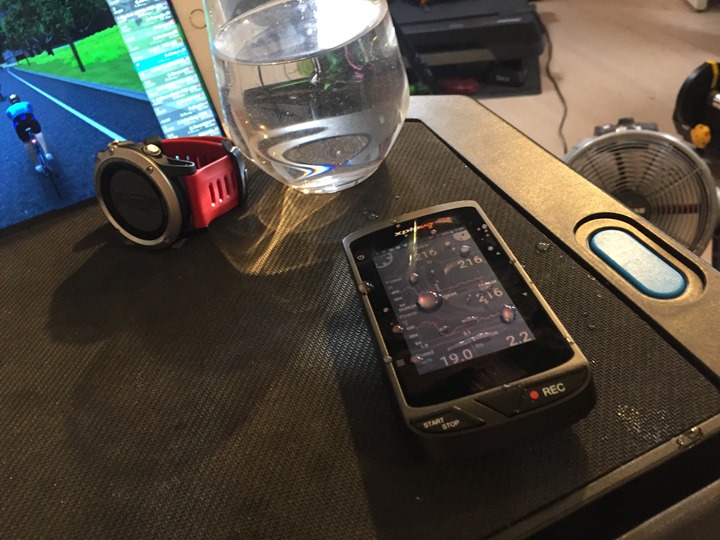 I had configured it to automatically record little snippets of video (9-second clips is the max you can take) each time I went above about 320w.  There’s all sorts of triggers you can use, but that’s just what I settled on.  For fun I pointed it at the Zwift screen (iPad variant), because…well…pointing it at me seemed lame.  And pointing it at the wall would be even lamer. 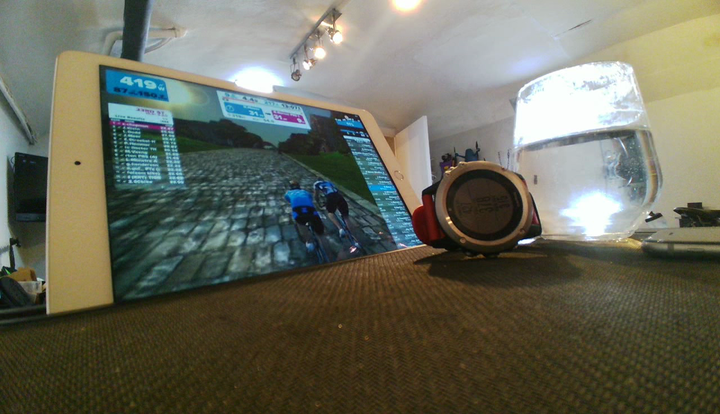 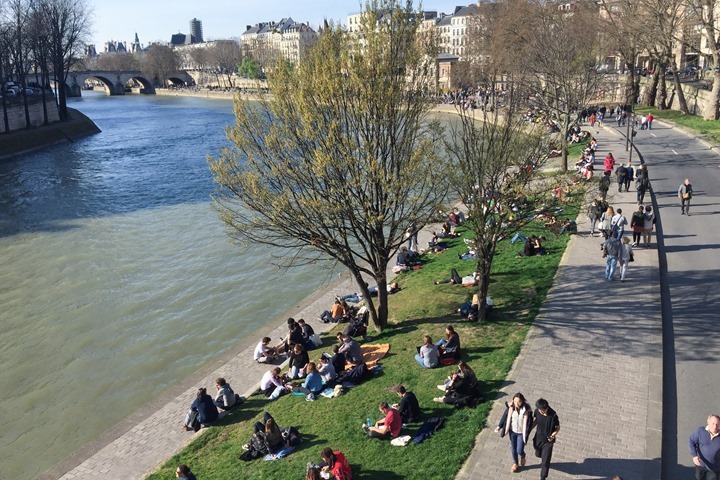 Apparently the weather here in Paris did not miss the ‘spring has arrived’ memo.  It got all crazy sunny here this weekend, with temps hitting 70°F/21°C. Boom!

I had some testing to do on a few different watches, and no better way to do that than an interval workout.  It’s funny, for the most part I use the same structure for intervals year after year when it comes to testing for optical HR sensors.  So manufacturers know what this looks like, it’s not a surprise.  Instead, it just goes to show the challenges of getting right optical HR sensors. 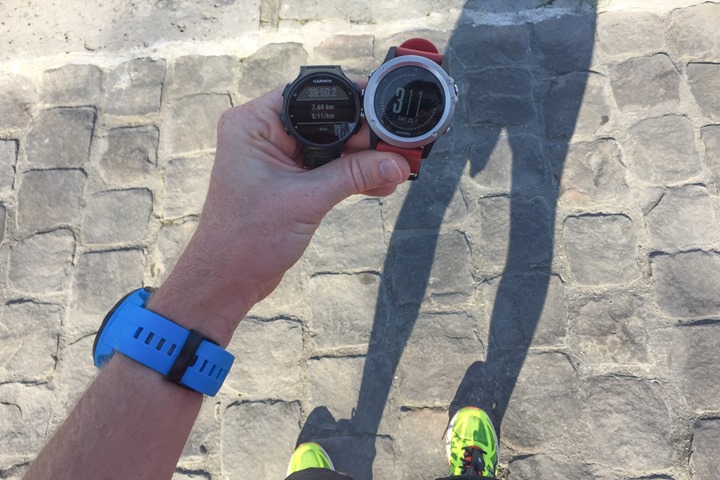 As for my workout, it wasn’t super long, about 40 minutes all-in, and just doing loops around the canal near Bastille.  Even on the busiest of days, it’s a great place to do running intervals.  First, it’s super close to me.  Second, tourists don’t generally go there.  And third, it’s got dedicated bike AND running/whatever lanes.  The old bike lanes have become the running lanes.  Works out nicely.  Then I finished along the quay in front of the studio. 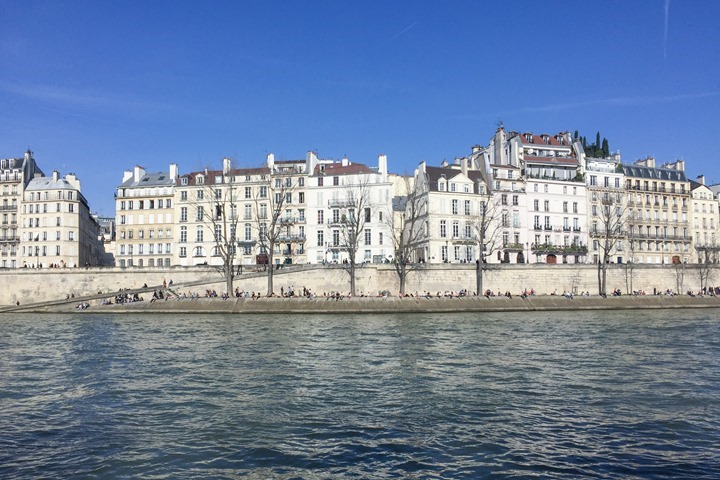 Afterwards, I wrapped up a few photos and videos of the watches, and then took a selfie or two.  Then I noticed a wedding or other party behind me, and they were actually using a Nikon Key Mission 360 4K action cam (along with two white stretch limos).  They were doing a legit photo shoot, and this was just documenting it or something.  It was a mixture of Japanese and British folks, no French.  The first Nikon 360°cam I’ve seen in the wild (except a trade show). 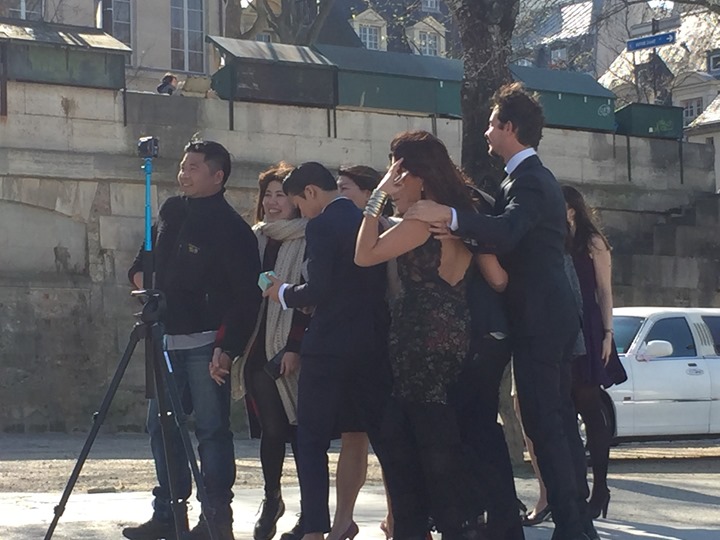 In any case, random observations from the end of a run.

Back a long-ass time ago I had favorited in my browser a local article about a small fresh pasta shop opening up.  For some reason I thought the shop was much further away than it actually was, so I never quite got around to going there.  However, on Saturday I finally re-opened the link and found it actually quite close.  A short pedal away by Velib.  Thus, off I went. 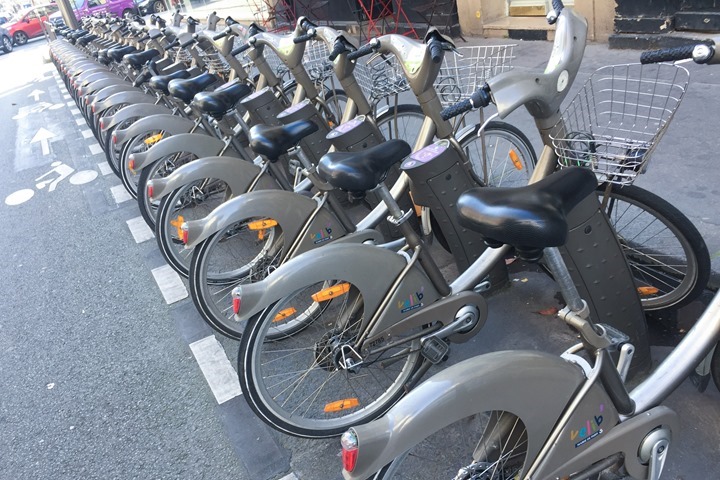 The shop had plenty of goodness, and the prices were pretty reasonable for fresh pasta in Paris (not nearly as cheap as you’d find in a market in Italy of course).  Sure, I could just make my own as I often do – but I was up for something different. 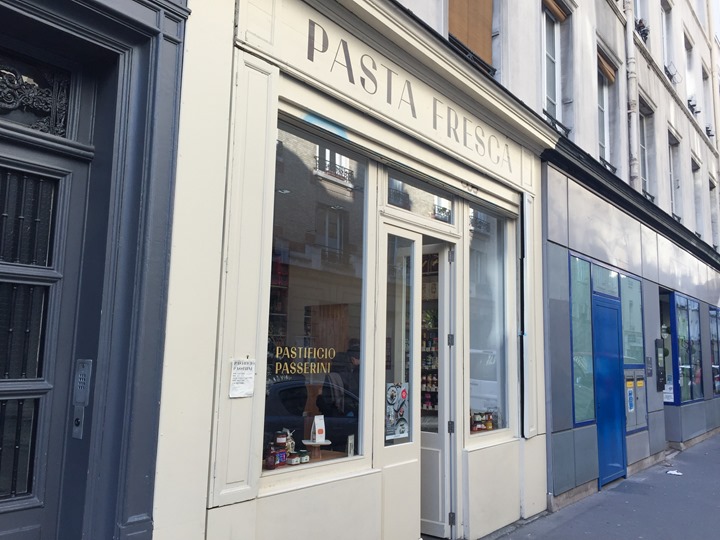 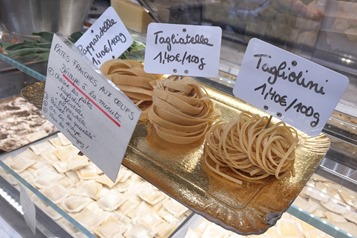 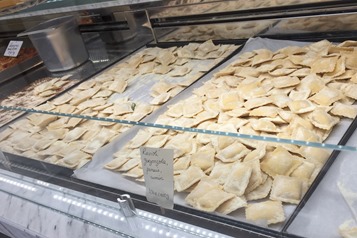 Nearby is a pretty sweet indoor market that I hadn’t been too – and they had plenty of goodness to check out as well.

And finally, I picked up some accessories I needed at a home/hardware store on the way home.  By the time all this was done, my little Velib basket was packed…with goodness.

5) Riding into the sun

With the beautiful weather continuing, it was time for a ride out of town.  I couldn’t really decide where to go, and was too lazy to build a route and load it into my GPS unit(s).  So instead I just winged it.  I followed my normal route out to Versailles, which traces that of the Paris-Versailles running race through the hills and forests. 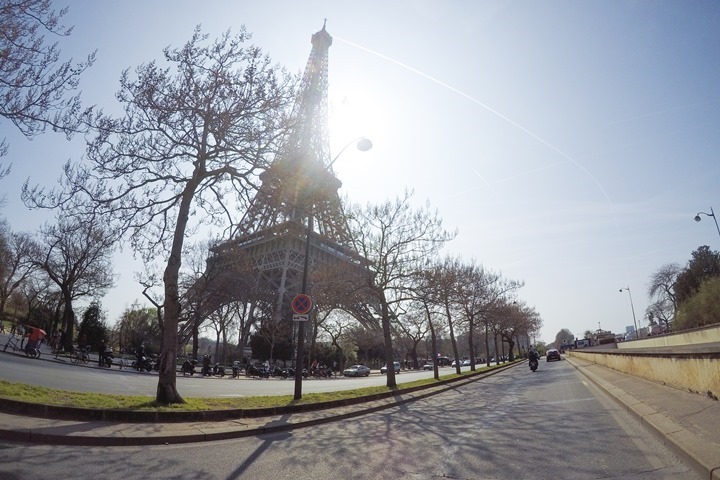 Then from there I wandered aimlessly in the farms/fields for the vast swath of countryside beyond Versailles.  It was a beautiful day for it. 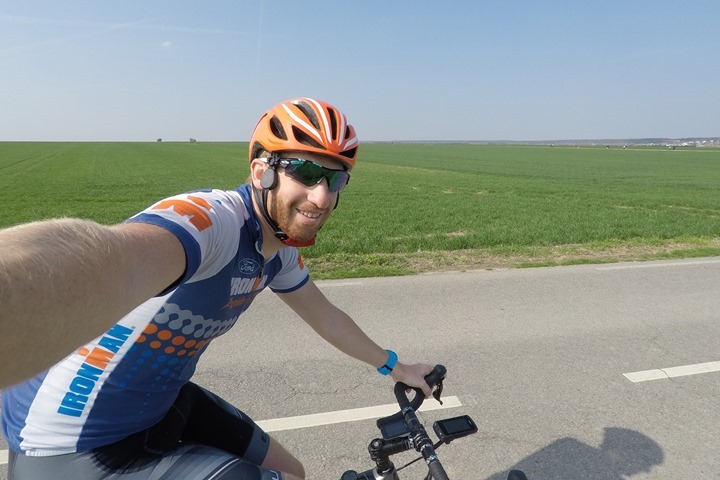 As always, more testing, including of the Xplova. 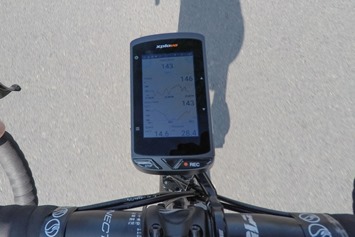 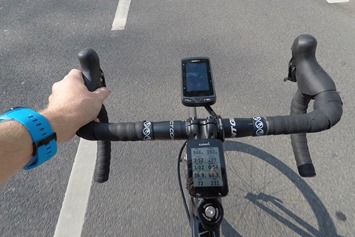 I’m not entirely sure what to make of it yet.  The small camera is definitely interesting, and I think certainly the medium-long term future of bike computers.  But the quality is just far too low to be of much use (not to mention the odd 9-second limitation, likely done to save battery life).  Beyond that tough, there’s just a lot of UI quirkiness, including many bad translations.  For whatever reason, bad translations are one of my biggest pet peeves in any device. 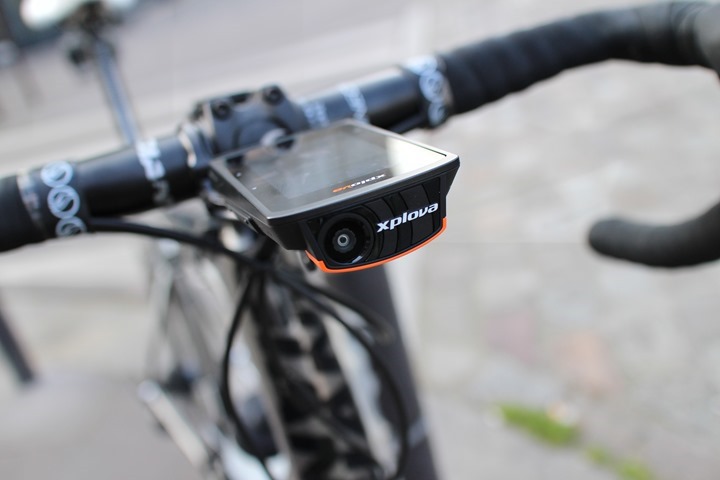 Still, I think the concepts they have in there are onto something – I’m just not sure if this is really the device to execute on it.  We’ll see.

Finally, on the way back into the city, I passed this woman on a bike who was displaying some impressive skills.  First, she went with just a single aerobar.  Not two bars. Just one.  In retrospect, it’s sorta brilliant.  Why have twice the weight when you can consolidate? 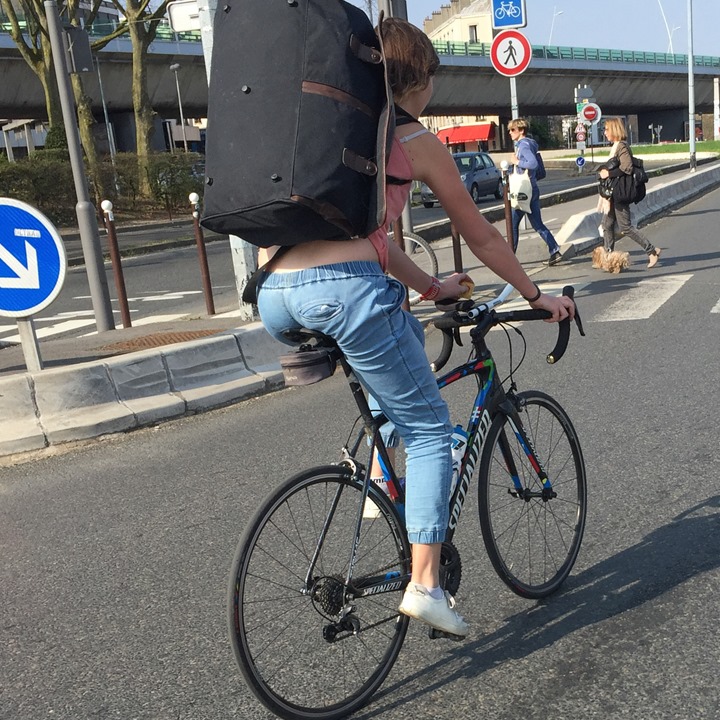 Next, she was eating and holding delicate crackers with not one…but two hands at once, while navigating through city traffic.  And finally, she was rockin’ the red Garmin FR920XT while carrying a bag big enough to hold a dead body.  Everyone knows the red color was the best one.

So…in summary: Riding single-aerobar’d, with two hands full of crackers in city traffic and all doing so with the red FR920XT and a dead body in the bag.  Well done…very well done.

(This is the point in which someone tells me she’s the reigning champ of something, which…with that custom paint job…she probably is. The awesomeness of cycling in Paris.)