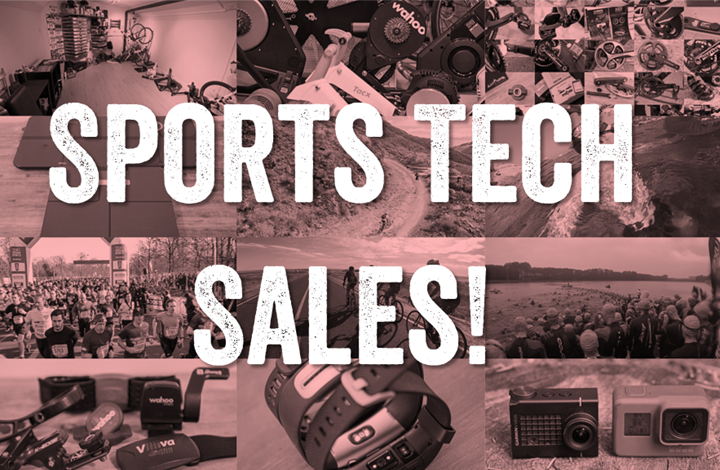 Every once in a while the sports tech sales world syncs up.  Kinda like one of those crazy synchronized spin bike performances (yes, you need to check that out if you haven’t).  For whatever reason, today kicked off a wide swath of sales from numerous folks: Garmin, GoPro, Fitbit, TomTom, and Scosche.

So why the sales?  Well, I think we’re seeing some of those companies adopt slightly different sales strategies for 2017 – aiming for less ‘big bang’ type sales, and more frequent smaller sales.  If you look, for example, at these deals, they virtually identically match what was offered over the Black Friday-Christmas sales just two months two.  Like Groundhog Day.  And then there’s TomTom, which is basically perpetually putting products on sale.  They’ve conditioned all of us to never buy their stuff unless it’s on sale (to be clear though, the Spark 3 watch series is a great lineup).

None of these products are considered old, and nobody would expect any replacements of these specific products anytime soon.  This is purely drawing in interest in the traditionally quiet February time period.

In any case, here’s the listing of active sales over the next few weeks – all of which started earlier today.  Note that different companies have different end dates, with the Scosche sale ending soonest, on Wednesday.

So basically – consider the above some Valentine’s Day sales or something.  Just to provide some brief insights on a few of these products:

Garmin: This sale is somewhat modest, though does touch on more of the broader reaching products for them.  The Vivofit 3 being the baseline Garmin activity tracker, whereas the Vivosmart HR+ is their GPS-enabled activity tracker band with full smartphone notifications, music control, etc…. The Vivofit Jr. is the kids variant, which is surprisingly cool (and the feedback I’ve been getting from parents with kids old enough is also surprisingly strong).  Unfortunately, The Peanut is still a bit too young at 7 months to be using it.  The best deal here, in my opinion, being the Vivosmart HR+.

TomTom: I wrapped up testing of the Spark 3 over the last few weeks, and just need to write up my thoughts and take some pretty pictures.  But overall I’m pretty happy with the usage of it.  The new 24×7 HR pieces added with a firmware update last year are much cleaner now with the updated app.  The optical HR seemed OK at a glance, but I haven’t run the numbers through the analyzer yet to dig into any nuanced issues.  More on that in my in-depth review.  Still, the baseline watch especially is really the best deal out there in sports tech at $99.

GoPro: These deals are ‘credit’ deals, meaning you get back credit at a retailer.  GoPro isn’t a fan of straight-up discounts on their products.  Out of the three cams on offer, my favorite here being the Hero5 Black.  It’s more or less my day to day action camera, except when I’m shooting something with data overlays (in which case I use the Garmin VIRB Ultra 30).  The reason for siding with GoPro as my daily driver? Simple: Fully waterproofed without a case.  I just don’t have to think about it.  Though, from a sports-focused standpoint, the VIRB Ultra 30 pretty much slaughters it in functionality.  In any case, you could pick up that Hero5 Black and then with the $60 credit you’d only be a couple of dollars short in picking up my favorite GoPro 3-way Pole, or three extra Hero5 batteries.  Not too shabby.

Fitbit: The Blaze got some nice updates over the past little while, including legit smartphone notifications (finally!), as well as a pretty solid update on the mobile app side.  Both of which are worth noting.  Of course with the Blaze you’re really buying into the Fitbit social ecosystem more than anything else.  Do keep in mind the Fitbit Blaze doesn’t have GPS built-in, but rather uses your phone’s GPS (which Fitbit cleverly calls ‘Connected GPS’).  In either case, if you pick up a Fitbit unit, the winner deal here is that accessories are 50% off for both the Blaze and Alta.

Scosche: This is simple – it’s $20 off, and remains my ‘most favored nation’ status for an optical HR sensor.  The fact that it’s dual ANT+ & Bluetooth Smart means it works with basically everything out there these days.  And the accuracy is unbeatable from an optical HR standpoint (in part because it’s typically strapped on your upper arm).

So there ya go – just a quick bit of coverage on these sales, in case folks are looking to pick things up following the frenzy of the holidays.  And for everyone else, I return you to your normally scheduled postings.  Except, you know, minus any actual schedule.  I mostly just float with the wind.

Oh – and obviously – if you use the linkage above you help support the site and increase your awesomeness.  And everyone wants to be awesome…especially going into a Monday.