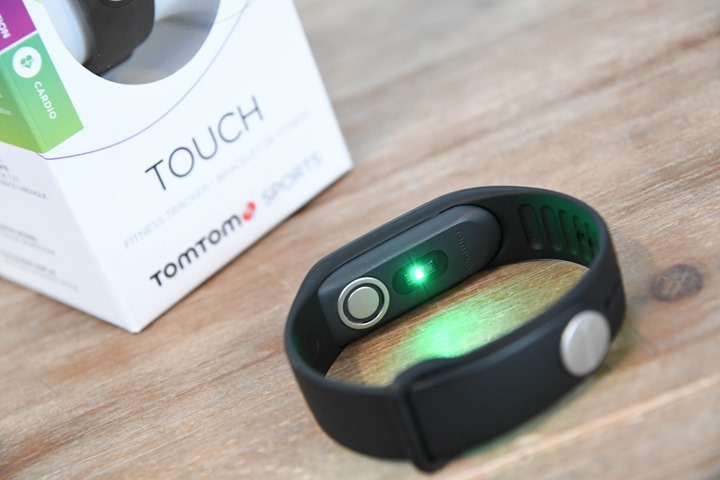 Timed to the start of the IFA conference in Berlin, TomTom rolled out three new fitness devices.  Though, I suppose technically four devices if you count that Spark 3 also goes by the name Runner 3.  And actually, it’s more like 5-6 if you count the various SKU’s. Either way, we’ve got basically three new pieces of hardware – with the focus on navigation for this next release of watches.  Having played with the units, it’s actually impressive in how simple they are to use – though that has always been a bit of the hallmark of TomTom’s fitness lineup.

To boil it all down, the new devices are as follows:

TomTom Spark 3 (aka Runner 3): Took the previous Spark and added route navigation
TomTom Adventurer: Built upon the Spark 3 and added a barometric altimeter, plus cool new sport modes for skiing and hiking (including 24hr GPS-on mode for long hikes)
TomTom Touch: A new wrist-band activity tracker that can actually measure your body fat

The folks from TomTom paid a visit to me last week to allow me to dive into the new units and spend a bit of hands-on time with them.  So I’m going to walk through each of the new features here, and then at some point between now and October 2017 the WiFi at Eurobike will cooperate enough for me to upload the videos I’ve put together.  Upload speeds here ain’t got nothing on 14.4kbps modems from 1994. 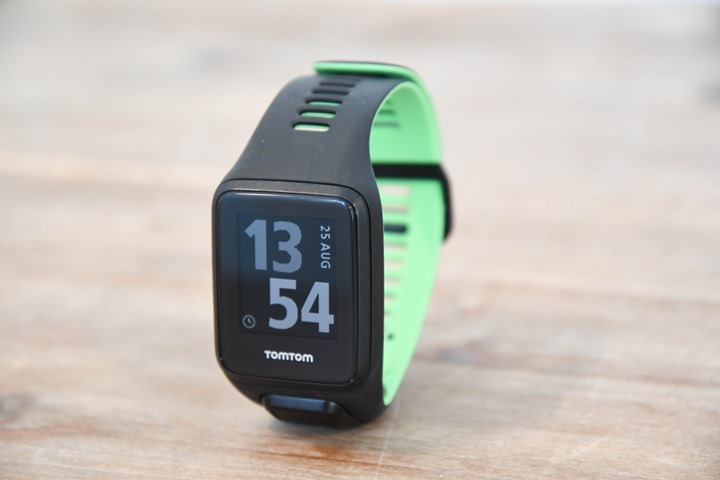 Note that from a naming standpoint it’s called the Spark 3 or the Runner 3.  There was no Spark 2, but there was a Runner 2.  So they’ve level-set on calling it the Spark 3 and Runner 3 to keep things consistent. As for why on earth they have two names for the same product…well…that’s a discussion for an entirely different day. 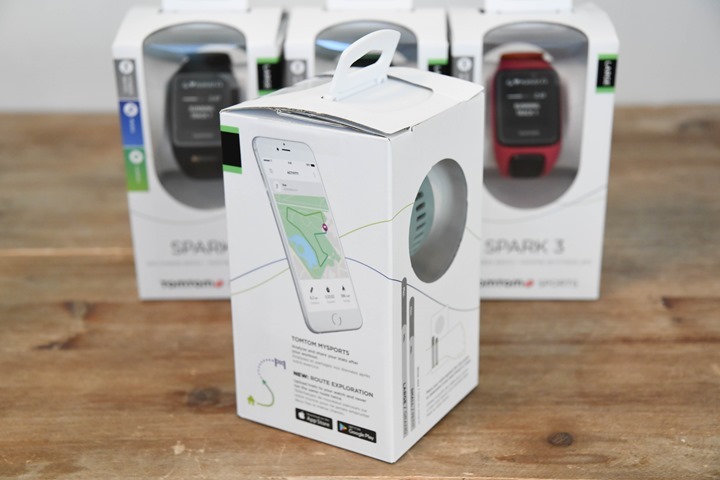 So when it comes to navigation the goal is a simplistic routing platform using what is essentially breadcrumb trail routes.  You’ll start by uploading a .GPX file (the standard for sharing GPS data) to their site.  This does have to be done using .GPX, but they noted they’d be open to adding other file format standards if they hear demand for it. 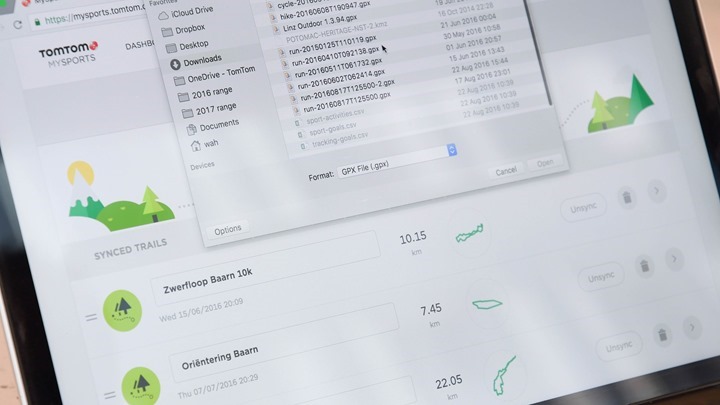 The upload process is silly easy, and actually kinda unique.  If I look at Garmin for example, I can’t actually just upload a .GPX file to create a course that sits in Garmin Connect.  Rather, I have to manually re-create the course.  So this is handy.  You can also take existing routes you’ve run/biked/etc and create courses from those.

Once uploaded, you’ll save trails into your online account.  You can have unlimited trails saved there, but it’ll only sync 15 of them to the watch.  By default it’ll sync all your trails, unless you get more than 15 trails and then you can choose which ones to sync. 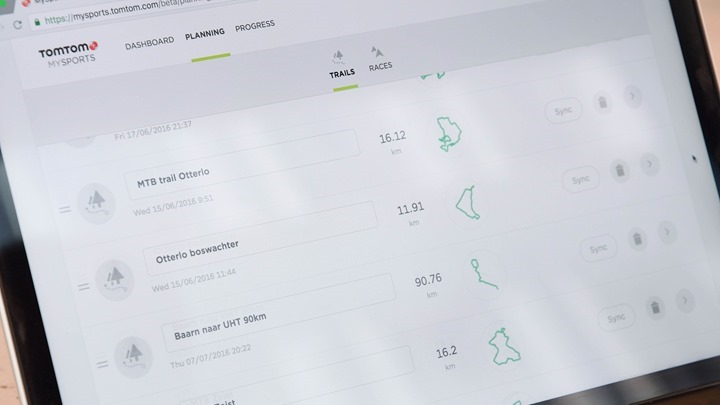 Note that the routing is a bit simplistic in that there’s no waypoints enabled.  However on the flipside, with .GPX files you can actually store multiple routes/trails in a single file.  So you could for example download the hiking trails for a nearby ski area (summer hiking), and have *all* of them downloaded onto your watch in one shot.  They actually demonstrated this for me with a series of trails over the Appalachian mountains that included 3,417.53KM of trails totaling 181,228 data points.  I can’t even imagine trying to load that on some of the competing devices.

Once you’ve got your trail sync’d (which will happen via Bluetooth Smart or USB), you’ll start an activity.  Any activity type can utilize the trail mode (i.e. running or cycling).  It’s down in the options area somewhat similar to how it works for doing a structured interval workout. 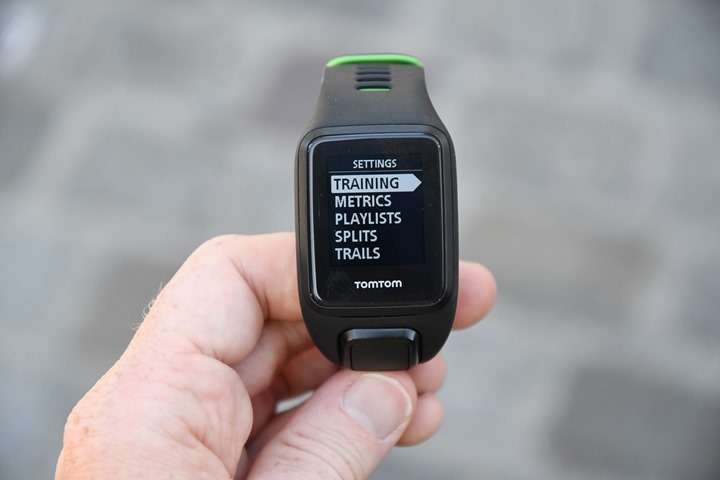 Then you’ll select the trail and start your activity.  You’ve now got three new dedicated screens.  The first screen is an overview of the entire route, and where you are relative to that point: 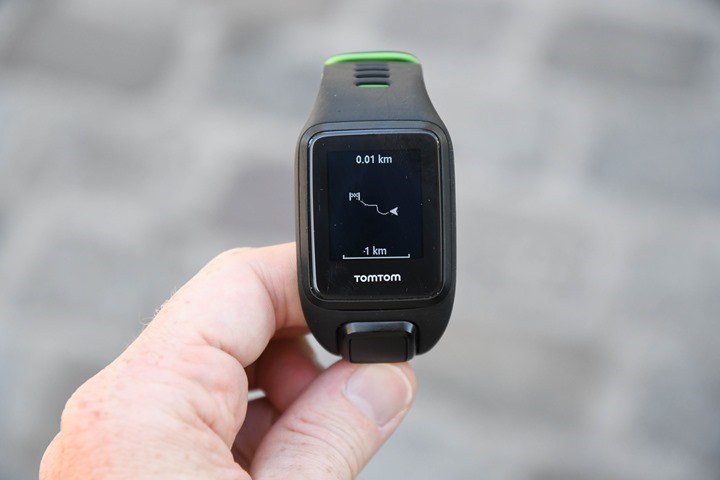 The second screen is a zoomed in view of the first screen: 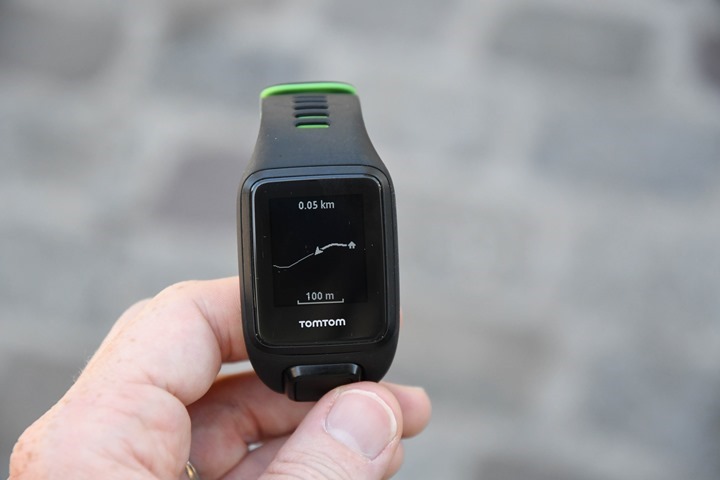 And the third screen is the compass. All Spark 3 versions include a magnetic compass. 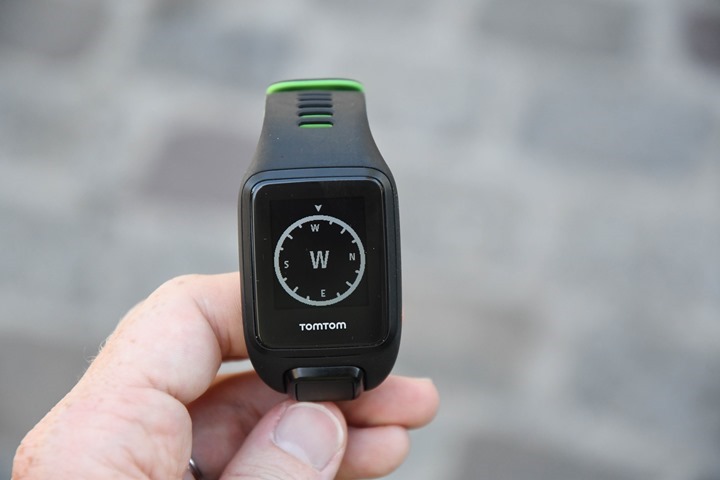 As you can see, it’s simply breadcrumb trail navigation – so it won’t get you routable details like ‘Turn left on Maple Street’.  But breadcrumb style is pretty much in-line with most other GPS watches anyway.

After the activity, it’ll show you the planned route vs where you actually went.  Again, something that pretty much none of the other platforms do: 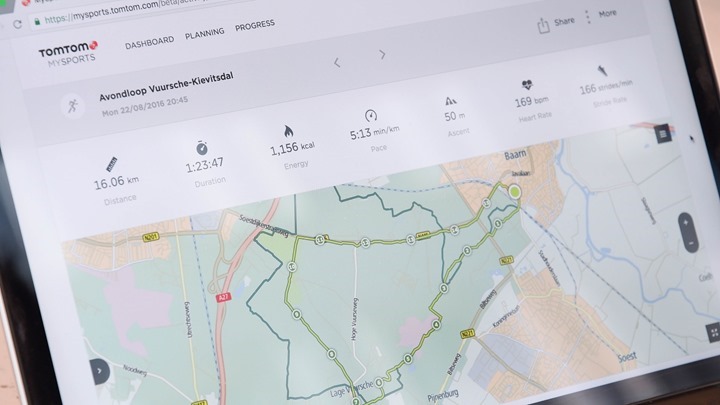 As with before, there are a multitude of versions of the TomTom series, all of which have slightly different hardware features.  They are as follows:

Oh, and the units start shipping on September 8th (next Thursday), so super-soon. 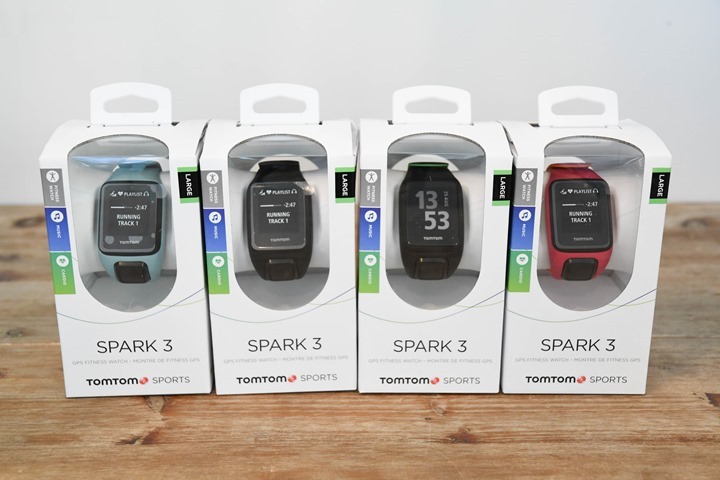 A final production unit is apparently already on the way to me.  So I’m looking forward to giving it some more real-world usage soon.

Next we’ve got the TomTom Adventurer.  This is most simply described as the TomTom Spark 3 above, but with an added barometric altimeter and some additional sport modes aimed at the hiking and outdoors adventuring crowd.  This has a single edition, which will cost you $349 but includes music and the optical HR sensor (but not the headphones).

First up, as noted is the barometric altimeter hardware added to it.  That means you’ll get more accurate elevation data versus GPS based elevation.  With that additional data clarity they’re adding new sport modes, including: Trail Run, Hike, Ski, Snowboard.  Each of those modes is customized for utilizing that barometric altimeter data.

For example, the Ski & Snowboard mode will automatically track your skiing and snowboarding runs.  Each time you take the lift up it’ll complete a run and show you the stats for the previous run such as speed and vertical droppage: 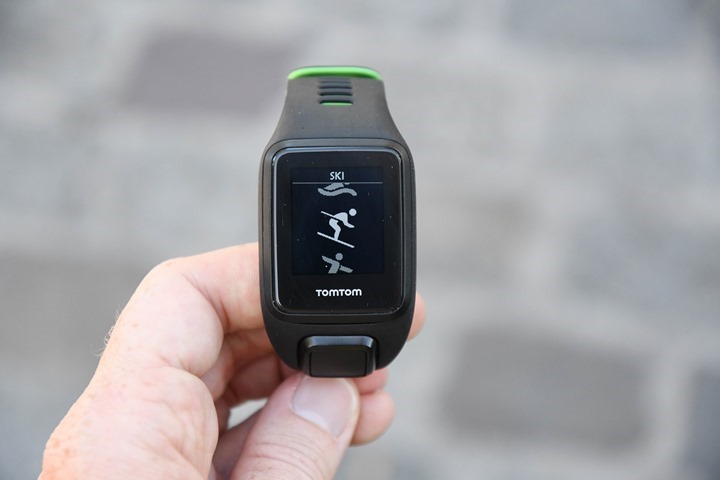 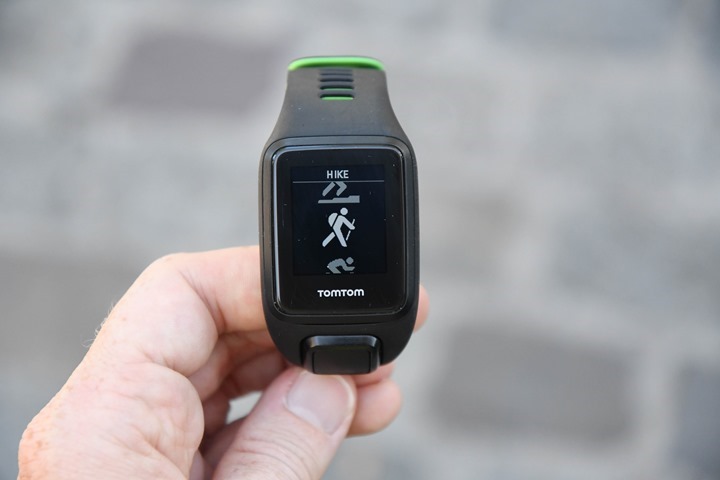 That barometric altimeter port can be seen there in the lower right corner: 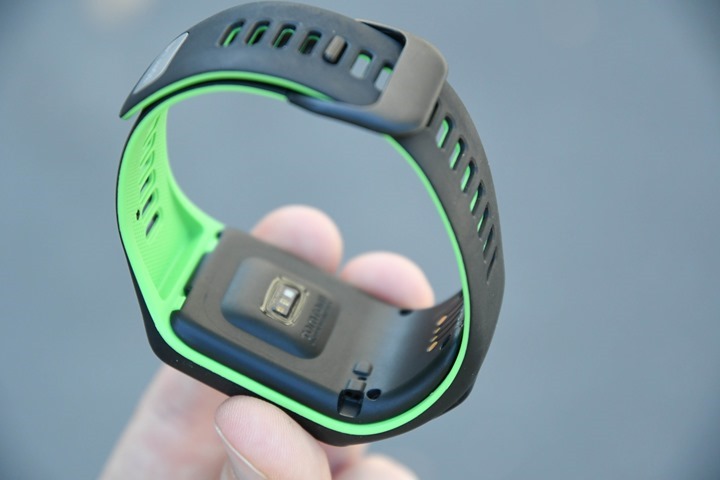 For hiking this is perfect, as there would be virtually no appreciable GPS track distance loss between 1s vs 2s recording rates, yet the upside in battery is dramatic.  If you compare this to various reduced update-rate options from Garmin and Suunto, this seems like a far better compromise than ones that update as infrequent as once per minute (UltraTrac on newer Garmin devices is a bit more frequent, but also more complex).

Note that there is no temperature recording in these modes.

The Adventurer as noted above will be $349, but won’t start shipping till October.  Oh, and it’ll also be offered in either green or black colors. 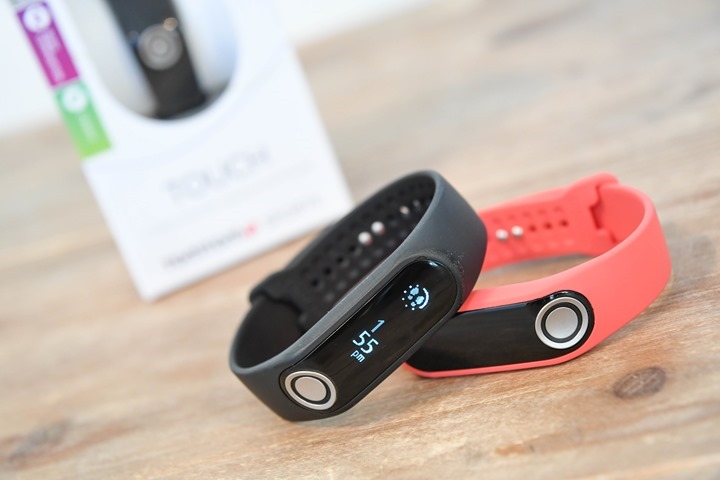 Last but not least we’ve got the TomTom Touch activity tracker with body composition (body fat, primarily) measurement.  This is TomTom’s first non-watch style activity tracker, and takes a unique twist that we haven’t seen before. 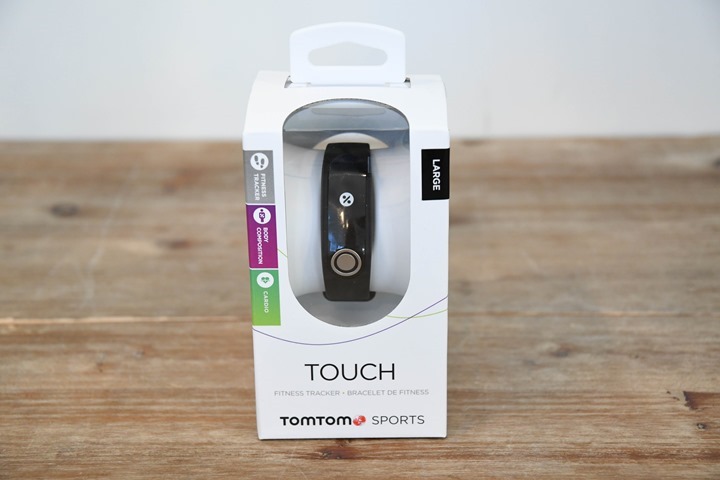 To start, it has all the usual activity tracker metrics including steps, calories, distance, and sleep tracking.  Plus, it has the optical HR sensor on the back for 24×7 tracking.  All of this is accessed via the touch screen. 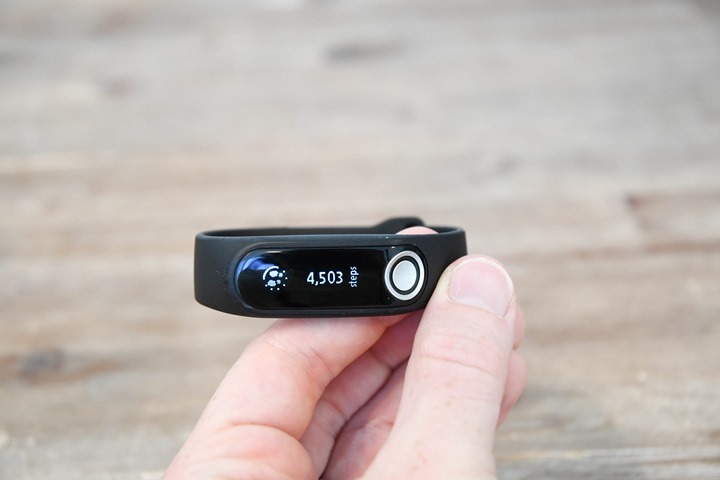 In fact, they’ll trend resting HR over time as well, which is calculated and then saved on the platform. 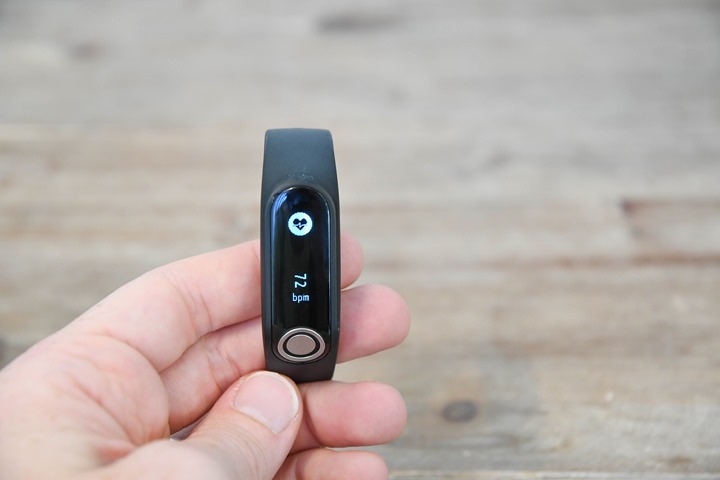 But the real party trick here is the body fat calculation.  So you’re likely familiar with body composition measurement on weight scales.  That technology has been around forever, and aims to measure your body fat using electrical impedance.  That technology works by having you stand on a scale and sending a tiny electrical current through your legs to your body.  Technically that current goes up one leg and down the other to two or more different pads that you’re stepping on.

Well, TomTom has taken that technology and applied it to a wearable.  They’ve added a small button to the side of the Touch unit, which allows them to complete a similar circuit using your arms.  Before you do that though you’ll want to swipe to the body composition screen. 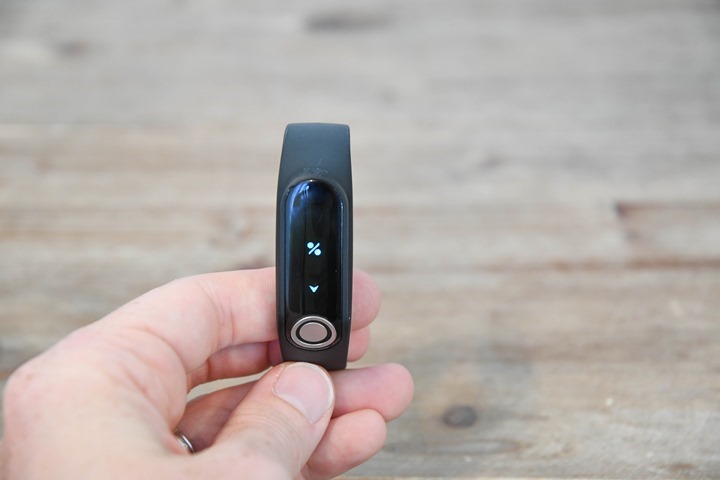 You simply touch the unit for a few seconds (with the other hand) and it’ll determine your body fat metric. 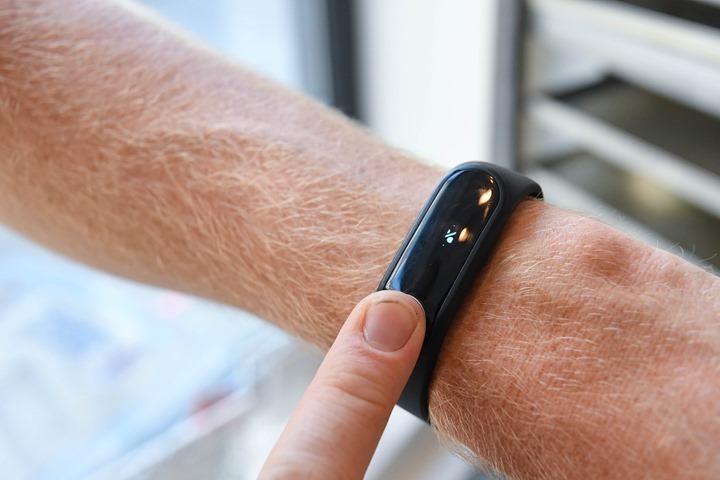 They did note that you want to wear the unit for about 15 minutes before taking a measurement, as it needs a little bit of time to warm up.  In my testing with it briefly that day, I’d agree with that assessment.

Note that you’ll likely see slight differences compared to traditional scales, because a scale is mostly looking at your body fat levels between your feet and your upper chest (where the current routes through), thus the lower portion of your body.  Whereas this is looking at more of the upper portion of your body.  It still should be in-line, but just keep that piece in mind.  Very roughly like where this line is on the person on the box below: 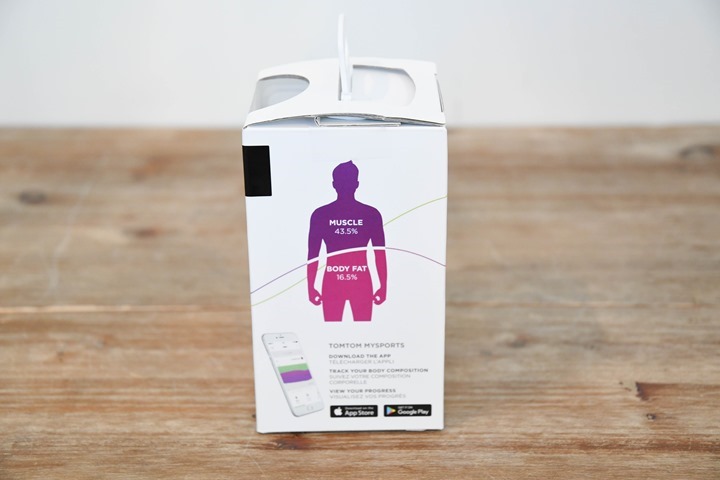 This data is then plotted/charted onto their site, where you can trend it over time.  They noted that the benefit here is trending over time more than it is specific day to day measurements.  Which is typically true of body fat % anyway.  Also, it’ll show you a breakdown of muscle, fat, and other (which is bones/water). 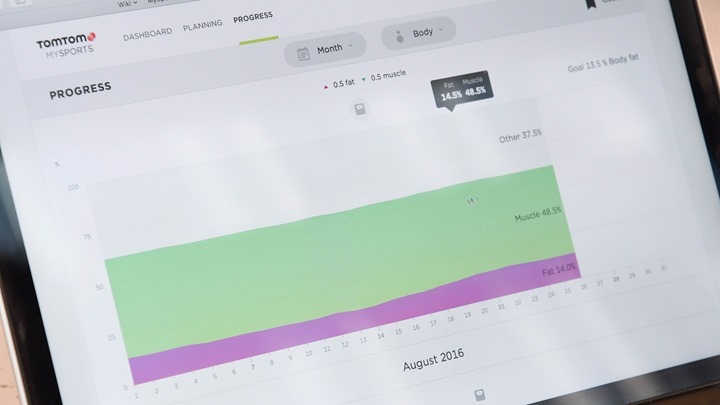 Oh, and you can manually track weight on the site as well: 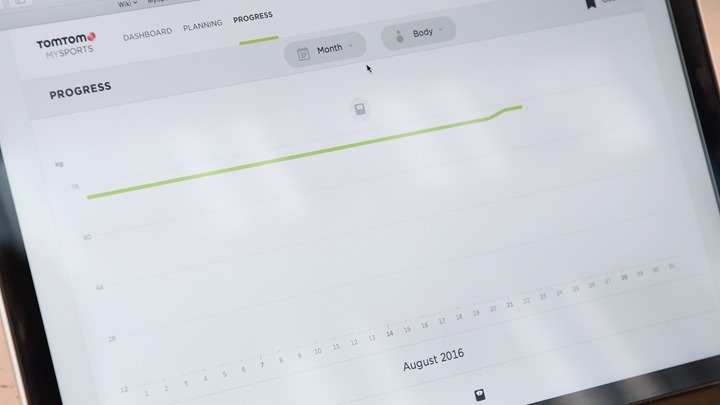 Finally, the unit does have a sport mode that allows you to track workouts with more detail (it doesn’t have GPS).  In the sport mode the unit switches the optical HR sensor from the reduced 24×7 tracking rates to 1-second recording rate.  Afterwards you can classify the specific activity type you did.

The TomTom Touch will be available starting September 8th as well, and will cost $129USD/149EUR. 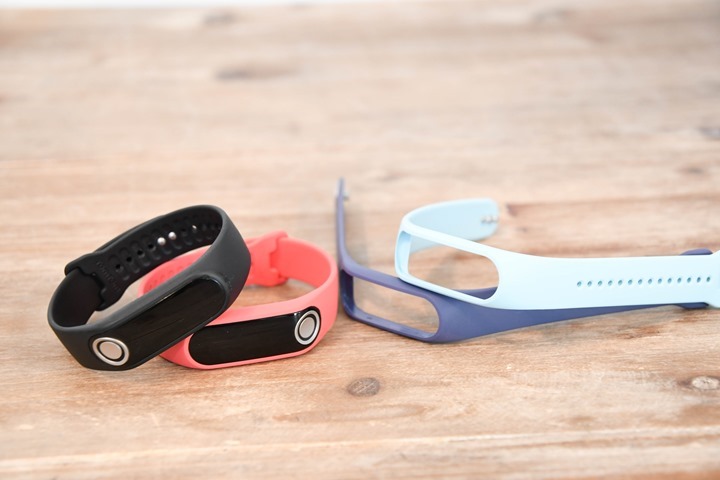 With that – stay tuned for my detailed video walk-through and demo of the units, which should pop-up on YouTube eventually.  You can subscribe here to get notified as soon as it does.

Update: You can order/pre-order the various new TomTom goodness from the folks at Clever Training.  By doing so you get 10% off using the DCR Coupon Code DCR10BTF, and you help support the site. Plus, free US shipping.  Enjoy!