Finally, a complete weekend back home without having to arrive via airplane or other transport mechanism.  With the busy early-fall conference/convention season complete (Eurobike/Interbike/ANT+ Symposium), it’s back to a bit of normality in my life.  Or, at last as normal as said life is.

With the weather looking great for the weekend, we decided to beat the crowds to the U-Pick farm for our pumpkin selecting.  So instead of going on Saturday, we went mid-day Friday…when it was totally desolate.  Perfect.

This is the same u-pick farm that we’ve been going to for years, you’ll remember our previous trips here…and here…and here.  All of which is actually just a repeat of the first date for The Girl and I many years ago, seen here (though, you didn’t know it at the time).  In any case, the farm is about a 30-45 minute drive, depending on traffic. 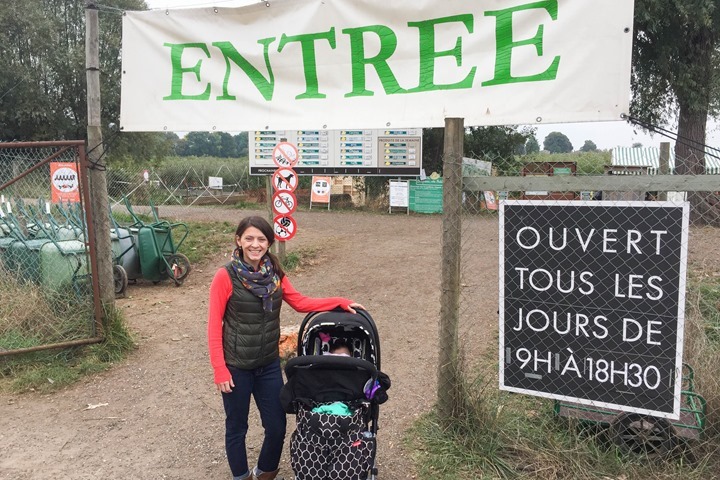 There didn’t seem to be any place to actually pluck your own pumpkins from a field.  But rather, instead, from bins.  So…umm…we did that. 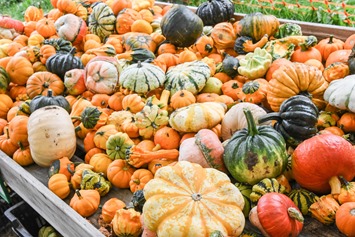 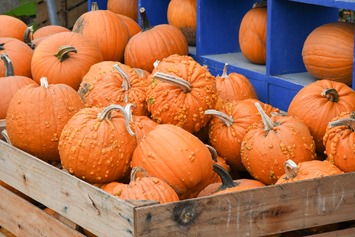 And then we took a wheelbarrow full of our pumpkins (we kinda got a lot of them), and headed out into the apple orchards to get some pics with the little one: 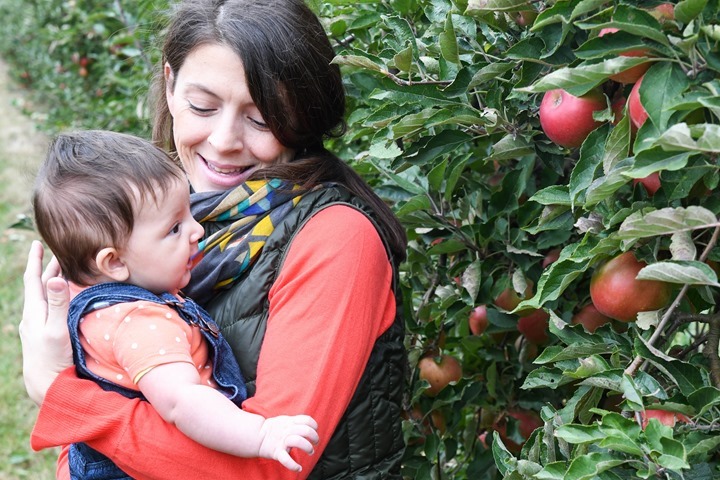 A few photos later (390 or so), we had a nice little first pumpkin excursion set! 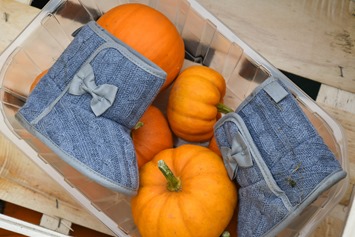 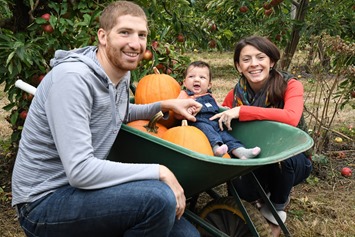 Afterwards, we surveyed and picked up a few other random items from the farm.  Because who could resist these bins? 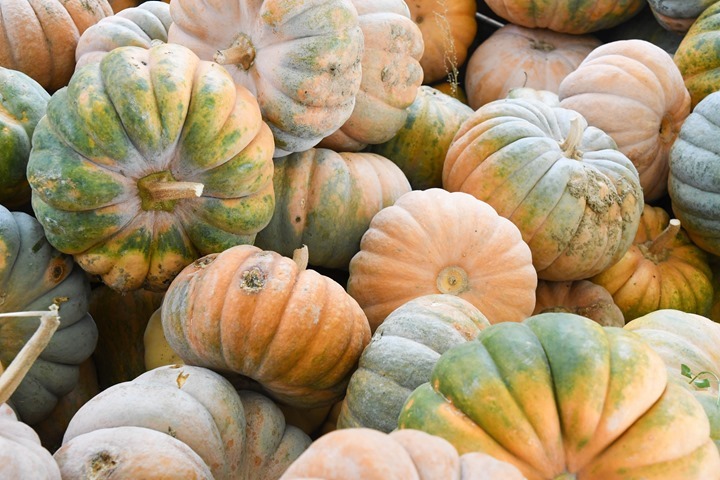 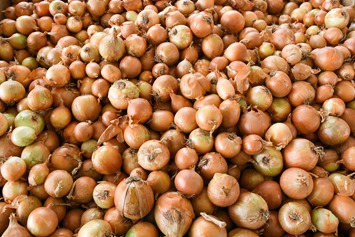 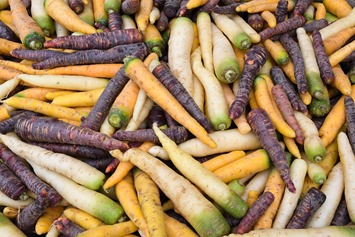 For those wondering, here’s the link to the farm. It’s basically right behind the Versailles grounds limits, though, you’ve gotta go a wonky away about it. 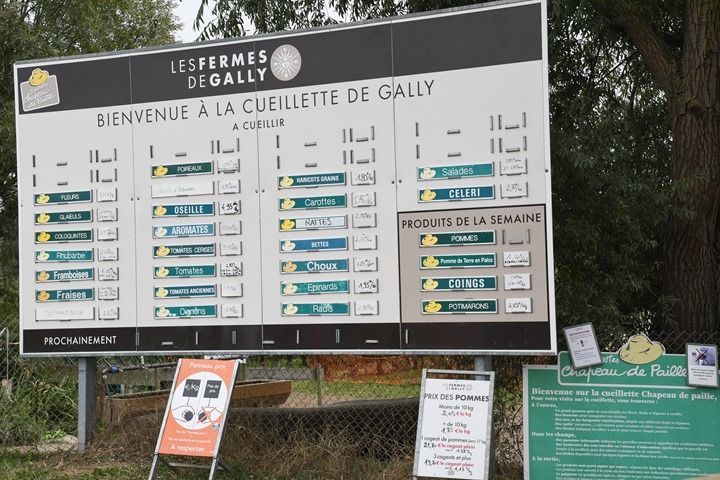 Lots of stuff still in season though, as seen by the picking boards at the top (their site is up to date too).

2) A Small Package of Stuff

Sometimes timing doesn’t quite work out with my US mail forwarding, where I need a specific item sitting there sooner than I can wait for other items to pile-up.  This was mostly that case where I had shipped a big pile of stuff during Interbike to my hotel in Las Vegas, and then had a few leftovers that were collecting dust there the last week or two.  So I sent over this small pile of things I ordered.  This included an extra GoPro Hero5 Black battery (no idea why I only ordered one extra, when I have two cams), a Quik adapter, and a Remo smart remote.  Plus, a small preview screen and cable to attach to my DSLR camera for when doing videos (so I can see what’s going on when on the lens side of the camera). 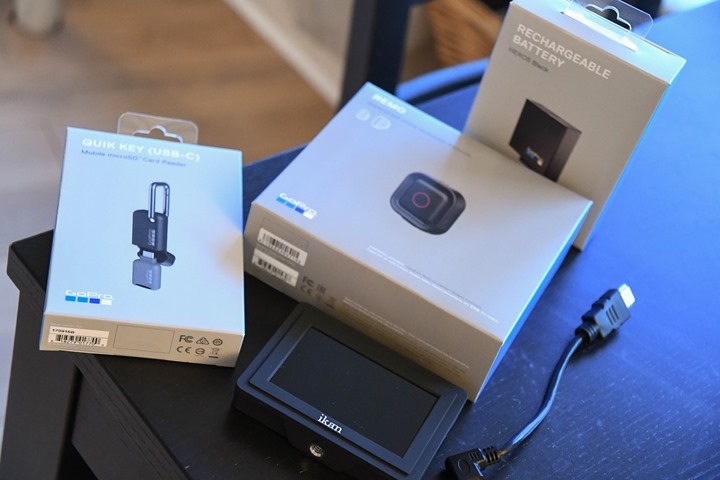 Of course, two of these purchases were flawed.  First, for some dumb reason I ordered the USB-C version of the Quik adapter, for which I have no USB-C phone. Durr….

Then, I thought I was really smart in ordering a small 6” HDMI to Mini-HDMI cable, so that I could easily connect the screen to my camera. I even had it be angled such that it didn’t put stress on the cable.  But…apparently my Nikon D500 DX has the angle going the other way, thus making it just a bit too short (it has to make it up to that ‘in’ spot). 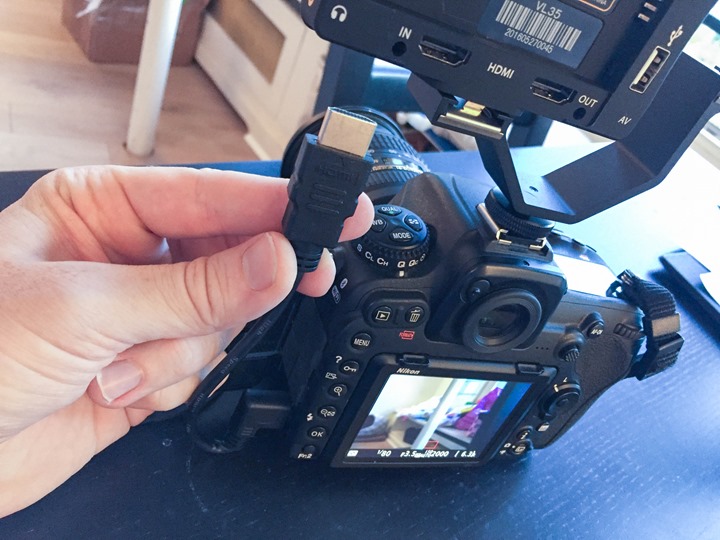 So…I’ve now ordered another stupid cable, and I can’t order the iOS variant of the Quik adapter, because GoPro.com has them out of stock.

(Side note: Why on earth does GoPro.com not do/allow pre-orders/backorders?  Even the investor community has harped on the stupidity of this, specifically with respect to Karma drone, which you still can’t order anywhere – meanwhile DJI has been taking boatloads of pre-orders for Mavic. GoPro will have gone 34 days since announcement until the first order is taken.  No wonder investors are upset.)

3) Enjoying the sun in the gardens 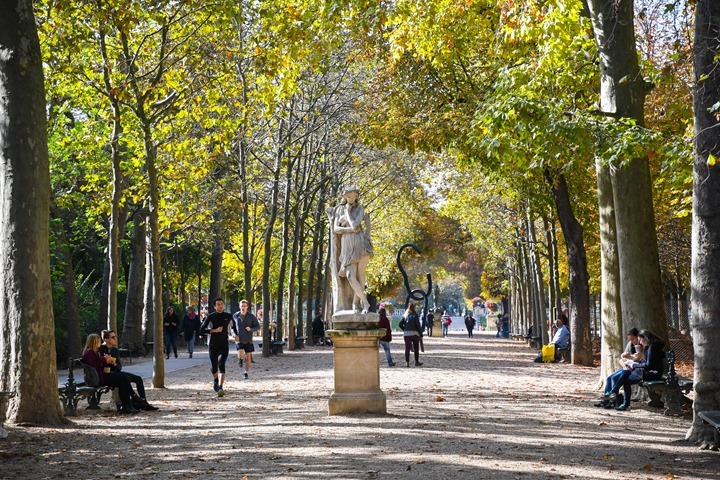 Saturday we spent a fair bit of time up at Jardin du Luxembourg, simply enjoying the beautiful weather.  This is likely our most favorite gardens in Paris, partially because it’s not too heavily touristic compared to other spots.  It tends to be more locals there.  It’s also just a bit more calm. 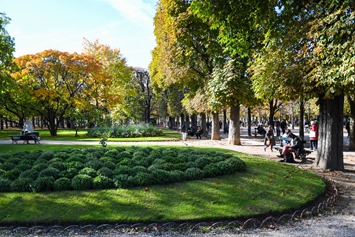 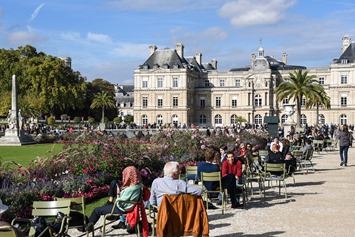 Albeit, this was probably the busiest day we’ve seen in a long time there – be it summer or winter.  I guess the nice weather does that!  Our favorite bit of the park though is the large pond/fountain where kids can rent small sailboats and chase them around with a long stick pushing them before the wind takes them across the pond. 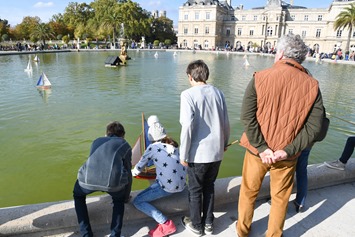 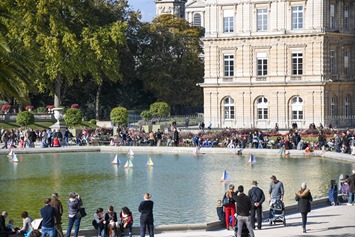 Someday our little one will enjoy doing the same.  Though, I suppose she’s gotta get onto that whole walking thing first.  Of course, if sailboats aren’t your thing, then you can just bring your own remote controlled battleship.  Obviously. 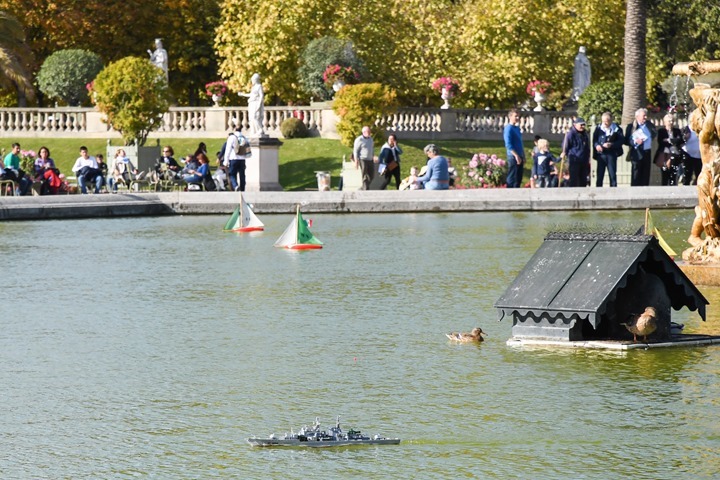 Of course, if only drones were allowed in Paris, then you might see a remote controlled aircraft carrier complete with landing aircraft (seriously, that video is actually real).  Until then…sailboats.

There are a handful of companies that do Paris running tours, but all of them cost some amount of money.  Running tours in major cities have been getting more and more popular. While I’ve published my favorite running routes on my Paris Running/Cycling resources page, that doesn’t exactly tell you the history of what you’re running by.  Hence the appeal of running tours.

One of the guys from RunParis.fr reached out and asked if I’d like to join them on their next run, so I took them up on it.  After all, it’s not only free to me…but free to everyone and anyone that wants to join! 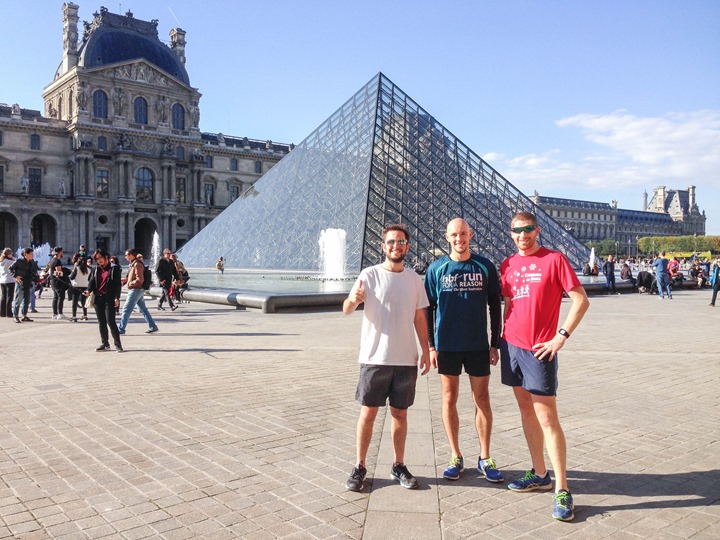 The route started at the tip of one of the two major islands in the river Seine, and then meandered past Notre Dame and up to Jardin du Luxembourg, before working its way back along the river over to the cobbles of the Champs-Élysées. 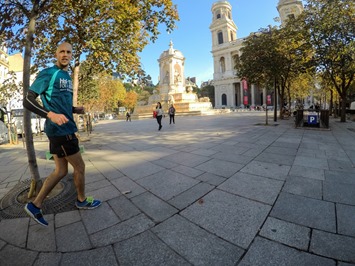 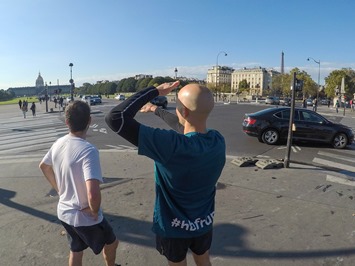 Eventually we’d end up through the Tuileries and into the Louvre: 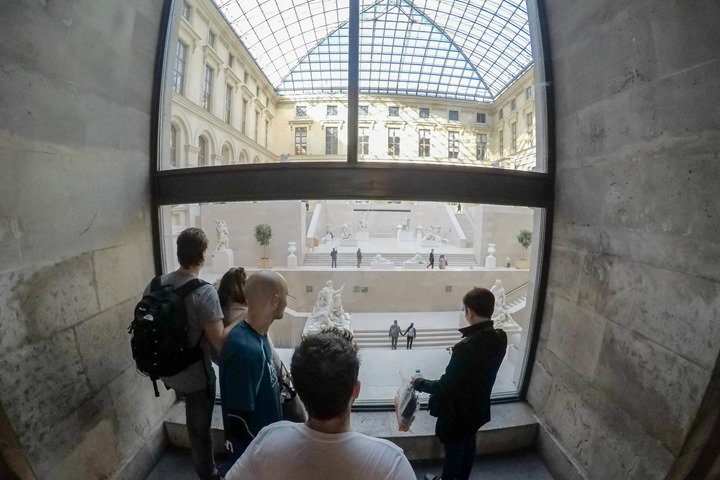 After which we crossed the once-popular lock bridge (Pont des Arts) and wrapped things back up again at the starting point. 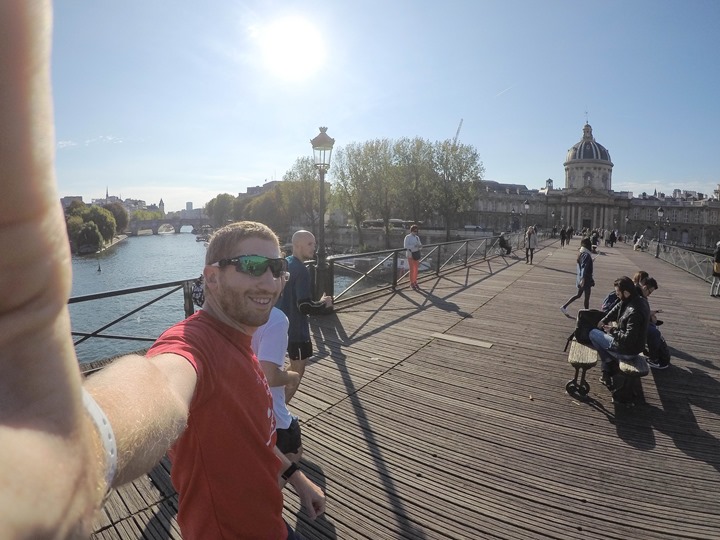 The entire loop was about 10K, and Luke (the guide) had plenty of cool historical things I wasn’t aware of.  I have lots of interesting tidbits in my head that are more modern day history, but not a ton of deep historical information.  So it was actually pretty interesting hearing some of that about the places I run past every day.

I’d definitely recommend the run to anybody, not just because it’s free, but because it’s legit quite good and informative.  Thanks for the run Luke!

After getting back from the run, The Girl and I (and the baby) headed out for a wander around Paris.  Our initial destination was brunch at town hall, as we had seen bus-stop advertisements about this event for a week or two. 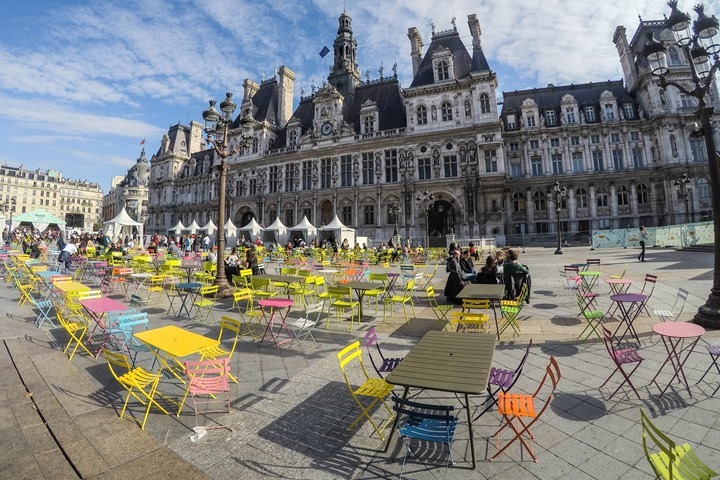 Unfortunately, we didn’t read the fine print on the ad (since it was usually from afar), but apparently you had to register prior to arrival (and prior to collecting your free brunch).  Plenty of other of people (locals) at the entrance gates seemed confused about this as well, so I didn’t feel so bad.  Instead, we just kept on wandering working our away through the Marais. 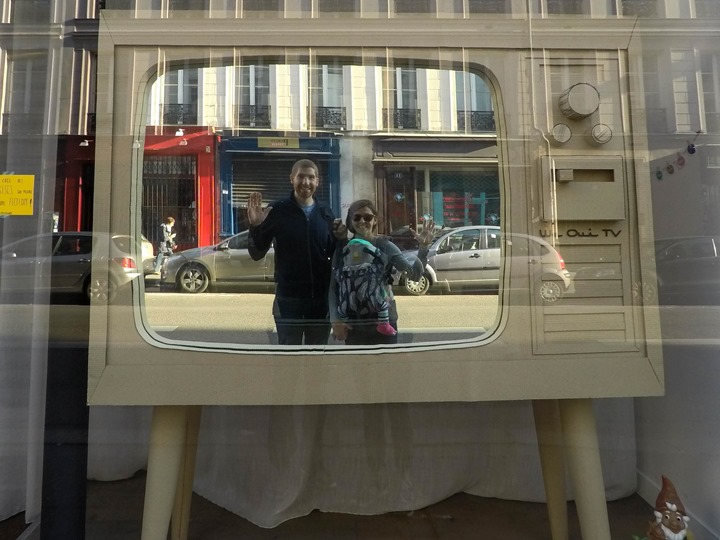 We stopped by this little butcher/sandwich shop that we visited last fall (and loved), but it was close to closing time and they were all sold out. 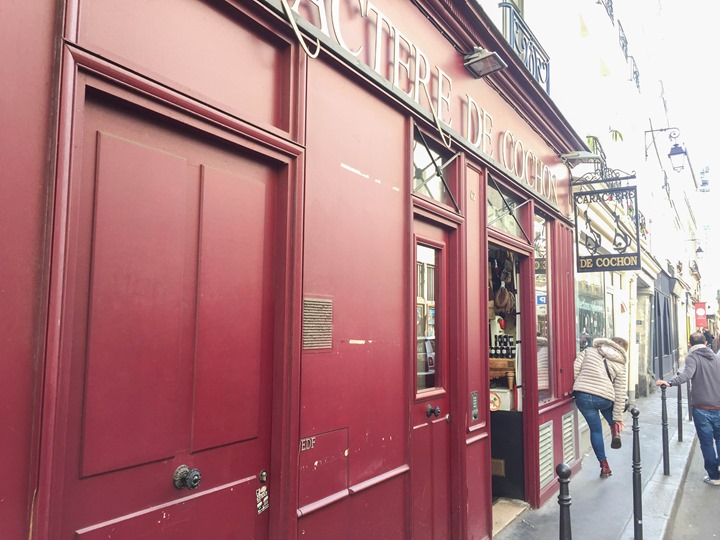 But one block away is a great food market of sorts where there are tons of mini-restaurants (as well as take-away options).  So we grabbed a bite there: 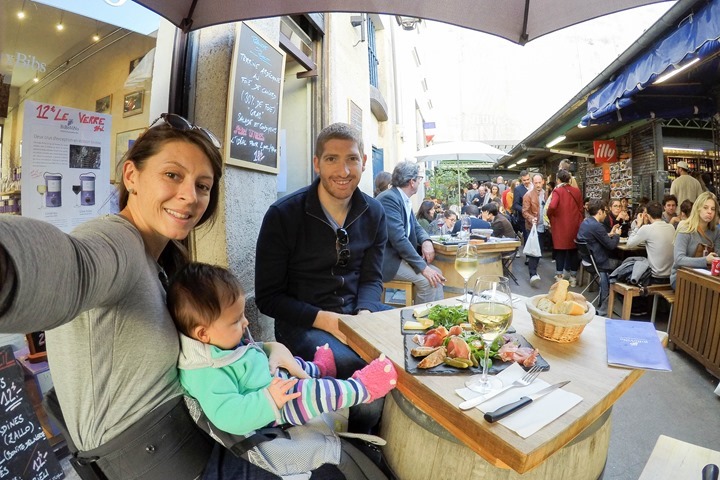 After that it was over to the park for a while to enjoy the afternoon sun.  It was about 70°F/21°C, so a beautiful fall day out. 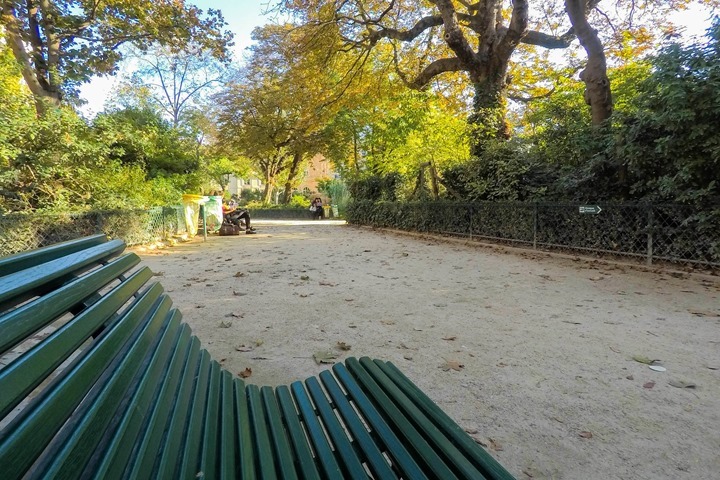 We’d eventually work our way back across town towards Bastille to our favorite Nutella-banana crepe spot.  While there’s always a short line, they’ve got four different crepe makers running at once.  Awesome. 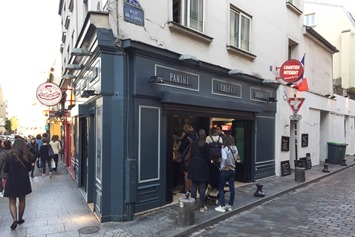 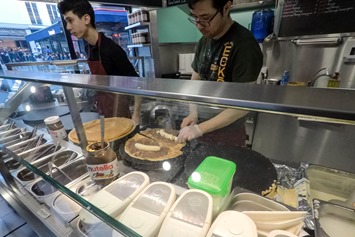 And with that – my weekend is complete. No better way to end it than a nutella-banana crepe!

Have a good week ahead folks!