New gadgets delivered via FedEx bike and a hop through Turkey

For the first time since being here in France, I noticed that one of our packages actually came by way of a FedEx bike carrier – which is pretty cool: 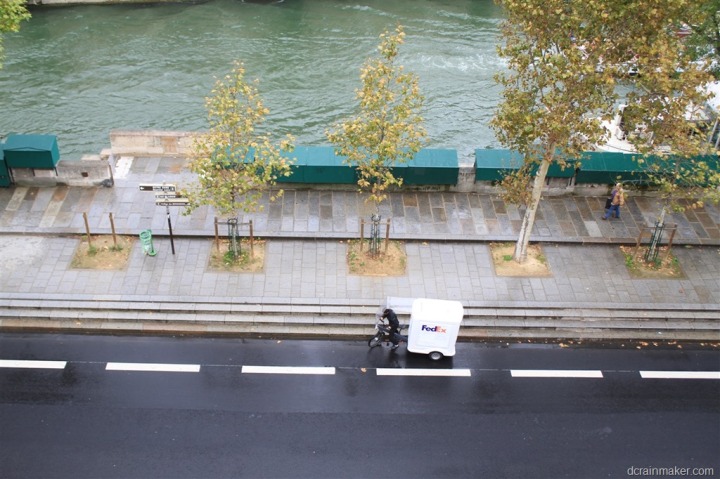 And the day of delivery was hardly all nice and sunny either.  Rather, that nasty cold rain that everyone hates.  He was out there trucking through it all on a bike that resembled a trail behind RV. 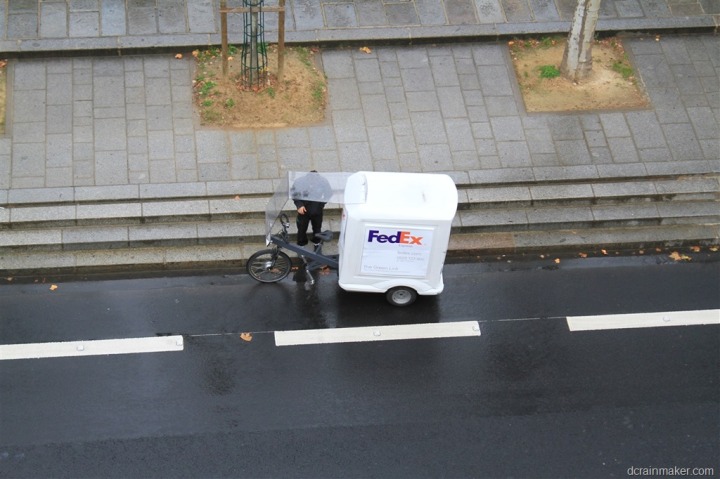 He was delivering a box full of items from our mail forwarding service in the US.  For example, the orange Garmin Fenix strap that I ordered back when the product was announced in July. 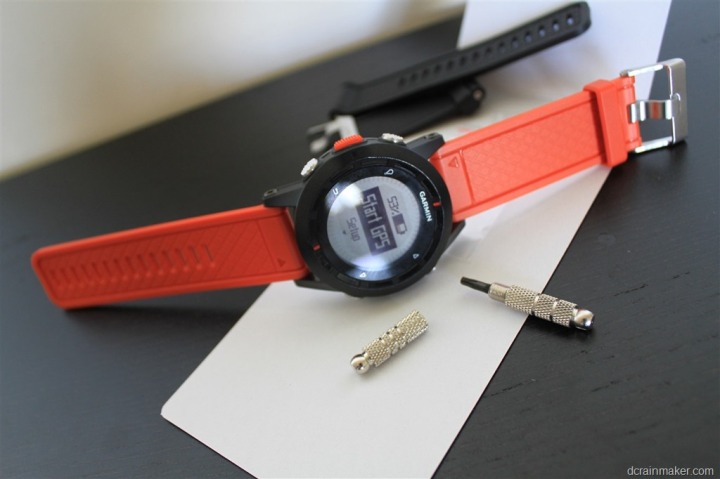 This might be a good time to mention that there’s been some good changes in the Fenix since my review was published last week.  Perhaps in response, perhaps already planned.  It’s a good first step, but there are still major items to get addressed before I can recommend it to runners. Specifically: Indoor training options and fixes to GPS-less/satellite-challenged recording, at least some portion of the running-features like workouts, intervals and virtual pacer, and support of the ANT+ footpod.  Adding power meter support might even get my praise.  The rest of the changes they’ve made I’ve outlined and updated in the post.

At any rate, as for the strap…  When it first arrived I thought it was kinda…bright…but now it’s growing on me a bit. 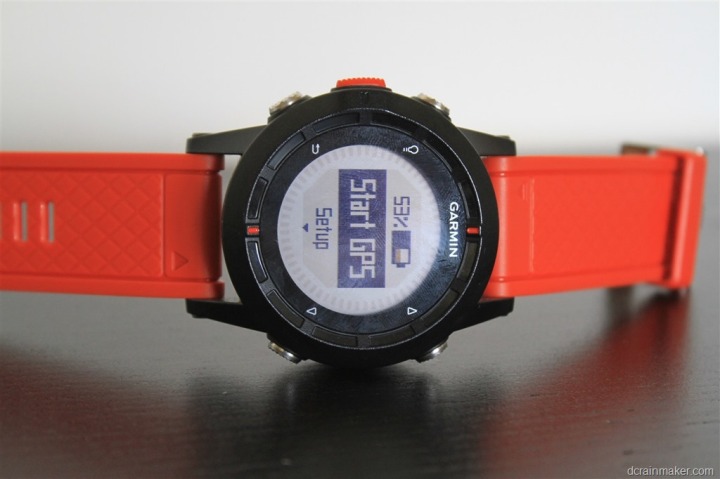 Looking at other gadgets, last week the BKOOL trainer arrived (I talked about it back at Interbike).  As I’ve previously noted, this one is in the queue behind the LeMond Revolution (or whatever it’s going to be called soon), and the Tacx Genius.

However, I’ve seen a pretty big uptick in requests to get my Trainer Roundup and Recommendations out the door pronto.  I know (and have used) enough about these trainers and their capabilities to be able to give some pretty good direction on which products to choose at which price points.  Should I wait until I finish all in-depth reviews, or go ahead and give you my thoughts now?  I know many are trying to get these bought sooner rather than later – but given my travel schedule over the next two weeks I won’t be able to get enough use on all three in the next three weeks.  Thoughts? 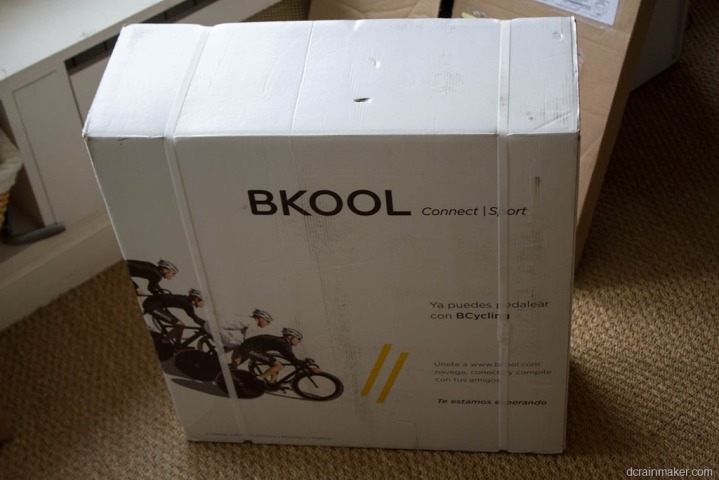 Next up on my arrivals list was my pair of Revolights.  It looks like they’ve started to make it through their international backers (mine as part of the international lot). 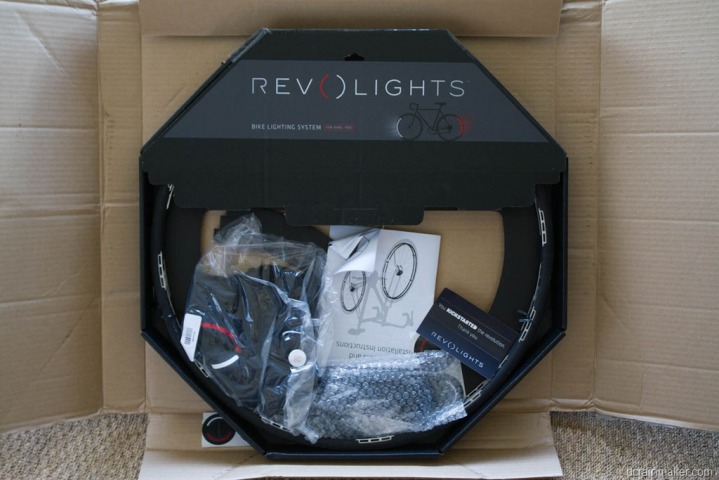 I had ordered these more than a year ago via Kickstarter, and I’m jazzed they’ve now arrived.  The units illuminate the side of your wheels dynamically to make you more visible, additionally, they also provide forward and backward light. 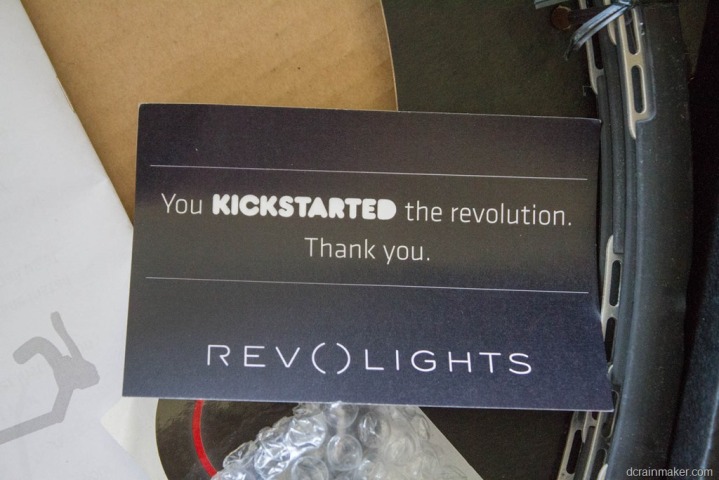 They came in on Saturday and I didn’t have a chance to build them up before I left again Sunday.  Rumor is it takes about two hours to install fully (not hard I hear, just tedious).  So I didn’t want to get started half-way and not be able to finish. 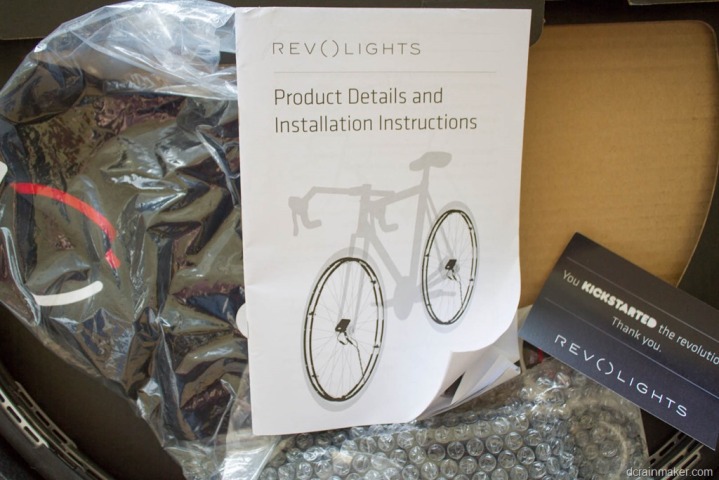 Nonetheless, I’m excited to give you my take on these via an In-Depth review here sometime this month once I get them installed on my Trek around-town bike. 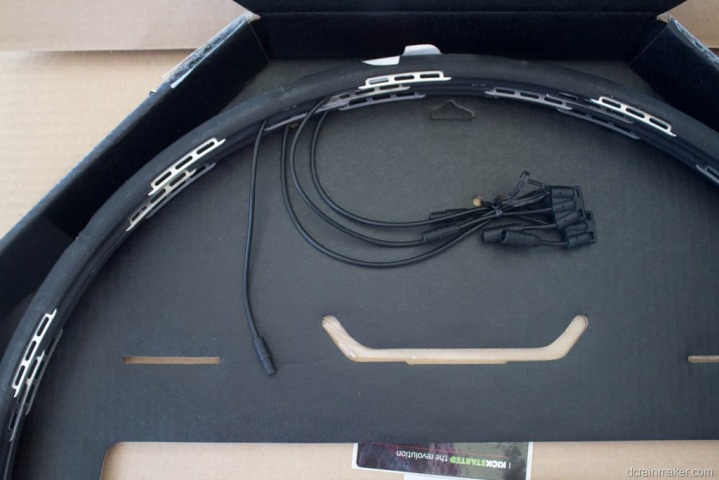 In addition to DCR goodness, I’ve been working on getting all the Bertie’s CupCakery IT pieces up and running ahead of her opening soon (that, along with my other official duties as Chief Cupcake Tester).  Now to think of it, I’m going to get Bertie’s Cupcakery business cards with my name on it made that say that as the title.  I’m serious.

Obviously, there are many differences between setting up a business in France and the US – and the IT components are just one of those pieces.  I’ve been in the front row to all the other components, but it’s the computer pieces I get to own.

In one respect, you’d think operating a cupcake shop should be simple – and, it probably could be.  We could probably go with a simple non-connected cash register that merely opens and closes and holds cash.  And, like many shops, we could probably even do cash only.  But, we don’t want to.  We want to embrace technology – and all the benefits it brings.  The ability to understand trending, have frequent cupcake rewards programs, online integration and more.

In the US, we’d just use the Square card reader and Register iPad app.  While a bit basic (we’ve done a bunch of testing with it), it would have ultimately worked and kept things simple. Unfortunately, the Square at this time is only available within the US (you can’t change currencies or transaction locales, though, otherwise, it would mostly work for us).

Instead, I’m having fun with other solutions that aren’t quite as well refined, like the below, Vend (VendHQ).  The whole thing runs on an iPad, though integration with the credit card reader isn’t quite as smooth.  This requires the iPad a networked receipt printer, a cash register drawer, a Mac Mini to act as a printing gateway, and a network. Plus, all sorts of things I probably haven’t figured out yet. 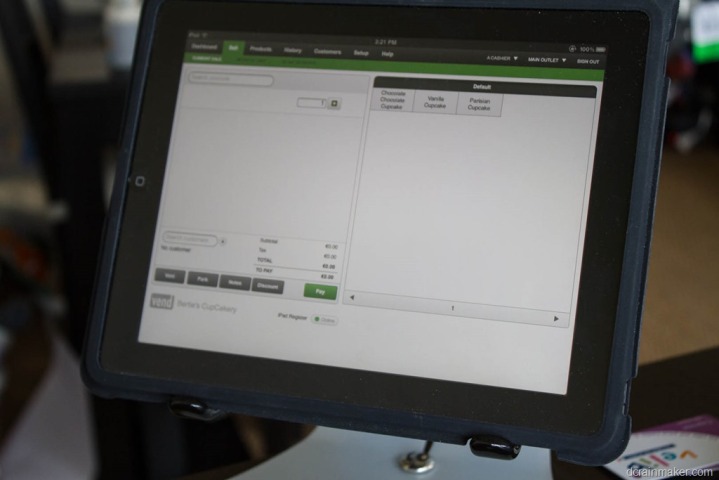 It’s funny to go from my day job of designing massive multimillion dollar datacenters, to a small business solution with a single user that ‘just works’.

Speaking of food related things – we headed back out to the u-pick farm this weekend.  The Girl’s dad was in town, and he enjoys cooking just as much as us.  He also enjoys cycling as he and The Girl spent the last week riding around the vineyards of France.  Below though, an easy stroll with me around the sights in Paris: 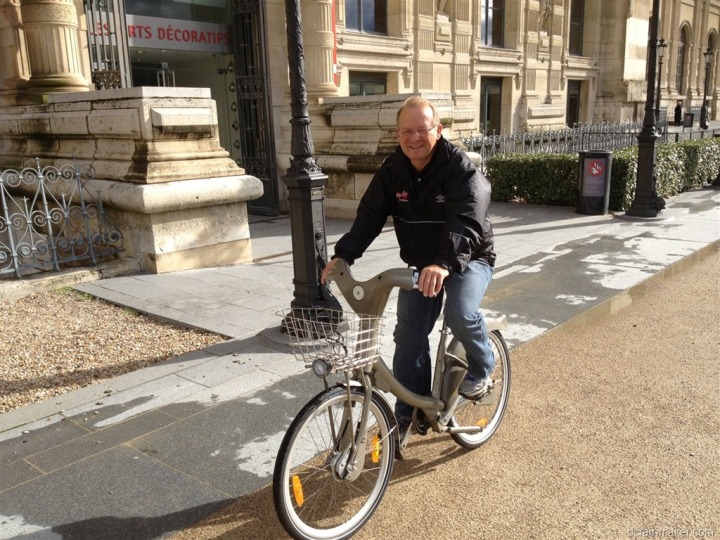 As for the farm, it was raining on Saturday, so we kept it quick out there.  First up was picking up a pumpkin.  Apparently though, the French have a very different method of carving pumpkins than in the US! 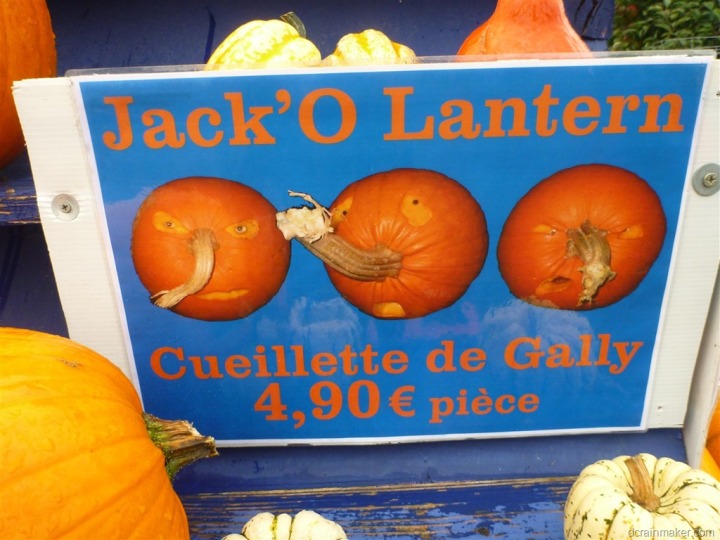 We got one big pumpkin which I’ll make pumpkin pie out of ($4!), though, we neglected to think about getting another one for carving.  Maybe later.  They also had tons of little ones: 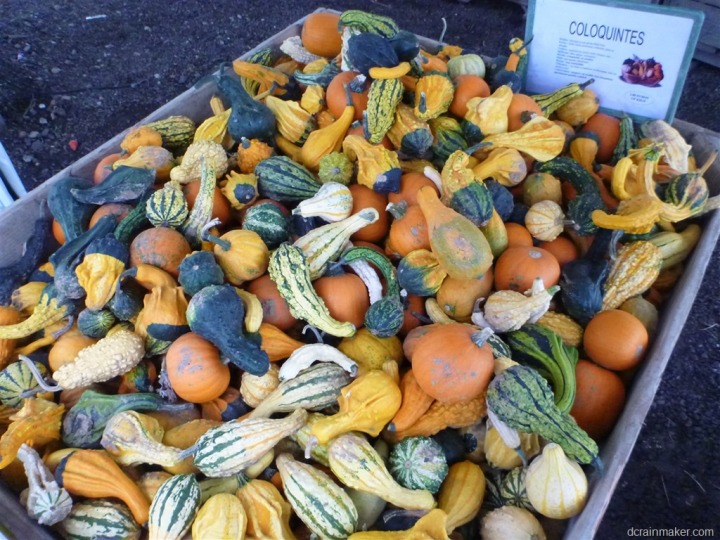 Instead, our focus this time was pretty much exclusively on Zucchini blossoms.  Last night, we picked up about 16 or so I think.  To our surprise, they were sold by weight.  As you can imagine, blossoms don’t weigh very much – and the total bill came to about 80 cents I think (16 blossoms in the US would cost you a fortune at a grocery store, if you could even find them!)

In light of that, and our ability to freeze our creations for eating all winter, we picked a few: 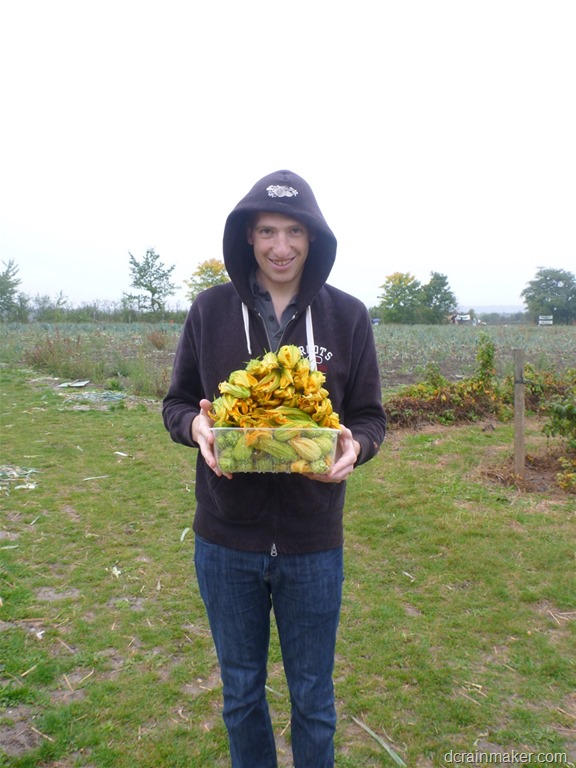 What was not so brilliant though was having to clean, prep, stuff, dip, roll, dip again and bread 70 of them.  Even with our assembly line, this took a bit of time. 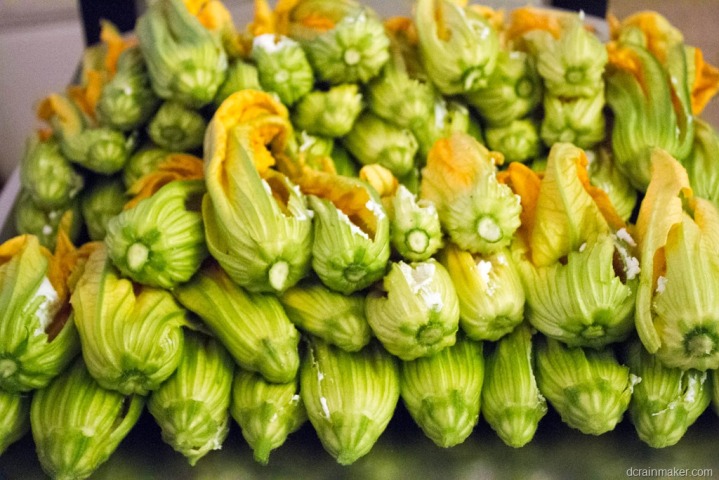 But we made good time, and before we knew it we were enjoying cooking up a storm.  We had blossoms, plus The Girl made up some Lemon Risotto with Serrano Ham.  And then there was the usual wine – which we paid a whole $4 for.  And it was good (as it almost always is here)! 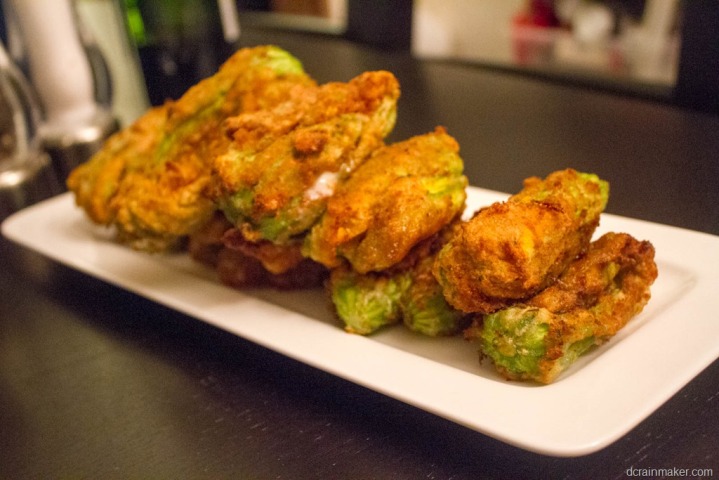 The blossoms were stuffed with two types of goat cheese again.  We believe we got the same types – but really, we didn’t keep track of the names.  We simply walked across the street to the cheese shop, picked out some that they recommended for our purposes, and went with it.  Life is simple that way. 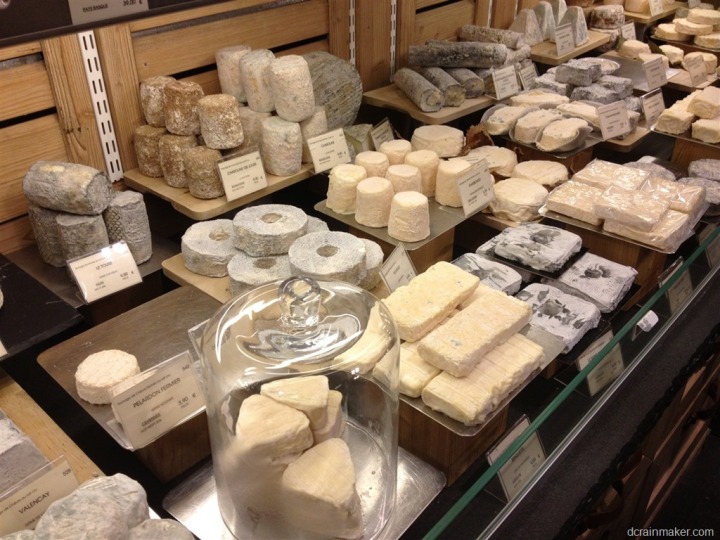 After our dinner Saturday, it was time for everyone to fly away on Sunday.  The Girl’s dad departed back for Newfoundland, meanwhile I jet set in the opposite direction – first for Instanbul in Turkey, and then for South Korea. 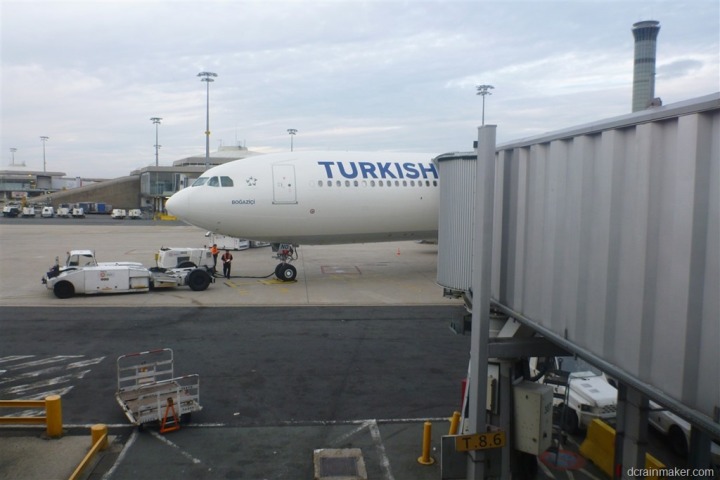 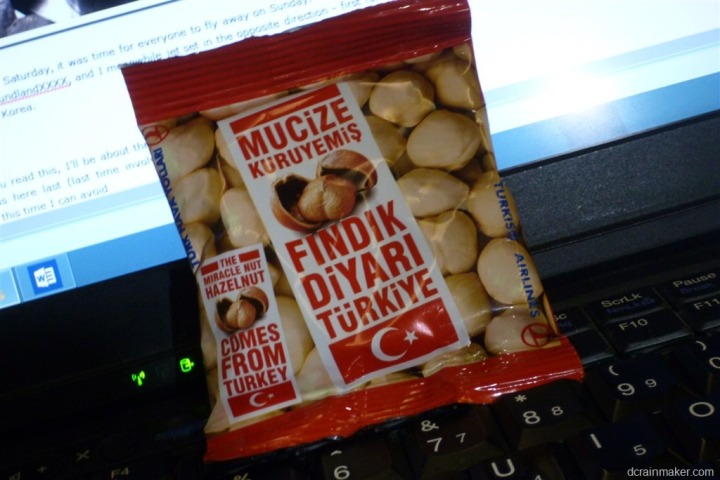 By time you read this, I’ll be about three hours away from landing in Seoul for a few days of meetings.  It’s been a few years since I was here last (last time involved eating those octopus that were alive and moving).  Hopefully this time I can avoid that specific scenario from re-occurring, as well as any sorts of international crises that seem to break out anytime I get near the peninsula.  I promise, it’s usually not me.

I’m sure things will go fine on both fronts.  With that – onwards I go!