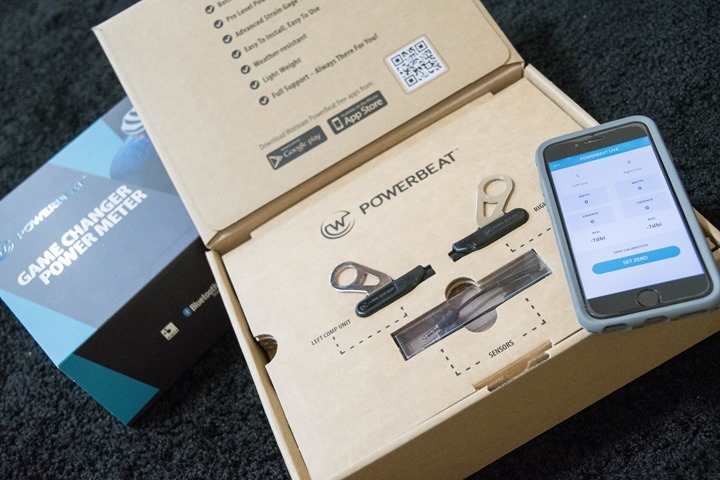 Before we move onto my next upcoming post (The Annual DCR Power Meter Recommendations Guide), I wanted to briefly touch on where WatTeam and their PowerBeat power meter stands.  To recap things a bit, they jumped onto the scene a touch over 2 years ago with a $499 dual left/right power meter offering.  The unit functioned by placing tiny pods with an attached sensor alongside each crank arm.  This made it virtually universal in compatibility with different pedal types, while also being flexible with different crank arms.

They had initially planned to start shipping last summer (2015), but that soon slipped to December (2015) then to spring (2016), when they did indeed start shipping.  However, it didn’t take long for myself and others to start seeing oddities in data with the final units.  Sometimes it’d be great, and then other times it was lost in space.  All of which led to them issuing a recall back in the spring (2016).  They noted at the time they’d need to pause things and figure out the cause of the issues.

Fast forward now to today, and a bit of an update on the future and getting products shipping again.

Where they sit today:

While WatTeam wasn’t officially on the exhibitor list of Interbike, I did get a chance to catch-up with the CEO Ofir Gal-On while in Vegas to get a briefing on where things stand.  This following about 4-5 months of mostly silence while they re-worked through the accuracy issues of the first generation units they recalled.  During that time they managed to not lay off any of their staff, including a customer service team they had brought on-board for the launch.  I could tell that Ofir was both more humble after their shipping setback, but also proud that they were able to keep all the employees on the ship during this period.

He had on hand a new box that contained the updated product.  From the outside the components may look virtually identical, but under the covers things are totally different.  The sensor pieces for example have been totally revamped internally and slightly externally.  The glue is different now.  As is the app, made simpler and easier.  About the only thing that’s still the same is the pod that hangs aside the crank arm, which contains the communications pieces.

Of course, it’s not about looks – but rather accuracy. 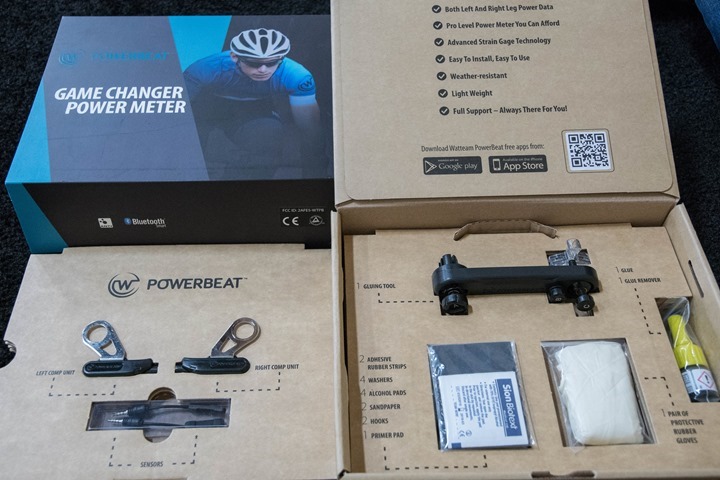 Many of the changes focused on the temperature shifts of the crank arms, causing underlying challenges as the materials changed properties – both impacting the glue as well as the measurement of power.  These problems are hardly new to power meter companies, and in many ways it’s the bit of magic that separates any startup from being a Stages or 4iiii.  Finding that magic can take years of R&D.  It’s why many of these companies (Stages, Quarq, and others) don’t show exactly how they apply/bake strain gauges onto other materials, since it could give away years of research to new market entrants.

In any case, with respect to WatTeam at present, they’re just starting a 6-8 week test cycle with an expanded beta group.  During this cycle they’ll be validating all of the testing they’ve done over the summer with a smaller group.  They believe they’ve got it figured out. But at the same time, they also expressed disbelief that all of their previous testing never caught the issues that I and others saw.

If that 6-8 week testing period goes as planned, then they’ll start shipping to consumers in December, which will likely span into January to catch-up with orders.

They did show me some of the new app screens, which are definitely simplified and easier to use.  The app isn’t something the average user would use every day.  Rather, it’s for setup/configuration, as well as checking settings.  Further, the app now supports moving the units quickly between multiple bikes, which the previous app didn’t. 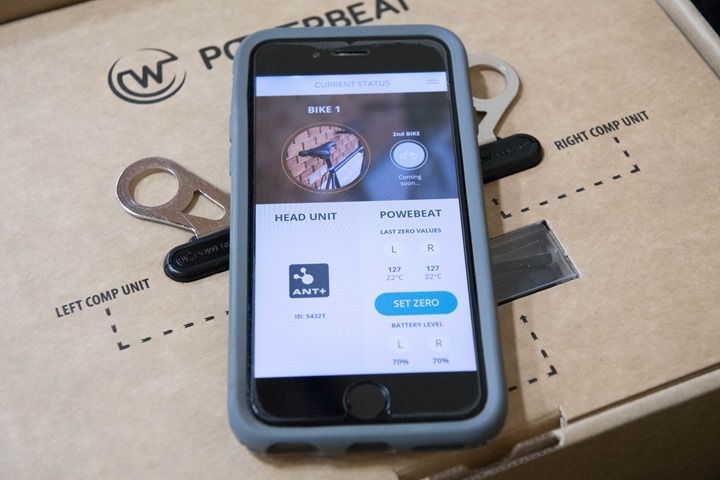 Further, it allows you to validate individual battery levels (seen above), as well as temperature levels and zero offset values (also seen above).  Seen down below you can check signal strength too. 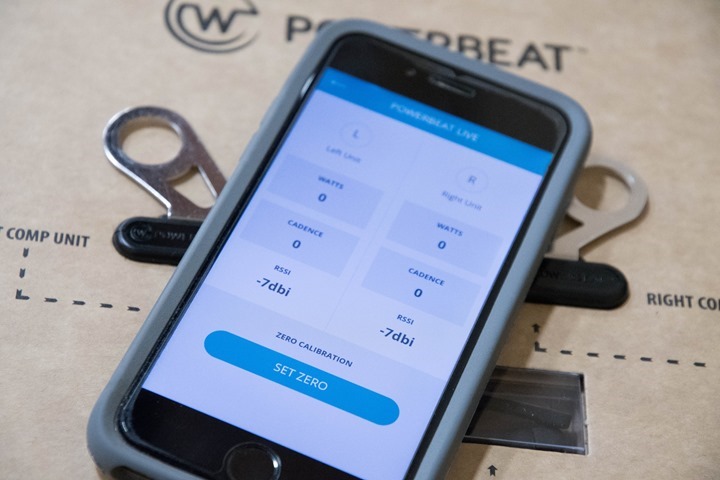 Upon (re)-launch of their order system, they’ll also be offering a mountain bike mount/version.  He didn’t have that crank arm on-hand, but did have a photo of it.  It uses the exact same sensor and pods, but instead has a small ‘sleeve’-like system that protects the pods and pulls them in under the pedal hole/bolt on the crank arm.  In fact, I think it actually looks a heck of a lot cleaner/nicer than the pods.

The good news is that even if you have the road version, you can order this instead, as it fits just fine on road bikes.  You’ll specify the exact size of the ‘sleeve’ when you order (based on crank width/height). 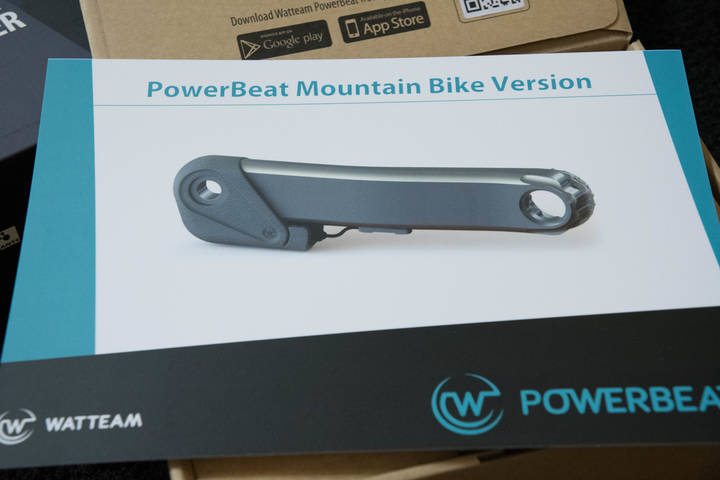 Oh, and as previously promised, any of the 100-200 folks who got the initial non-recalled units will get this new version free of charge.

Finally, when they re-launch ordering, it’ll be available in the US, Canada, and Europe.  I don’t have a precise list of which countries Europe includes at this time (a definition that often varies based on many factors for many retailers). 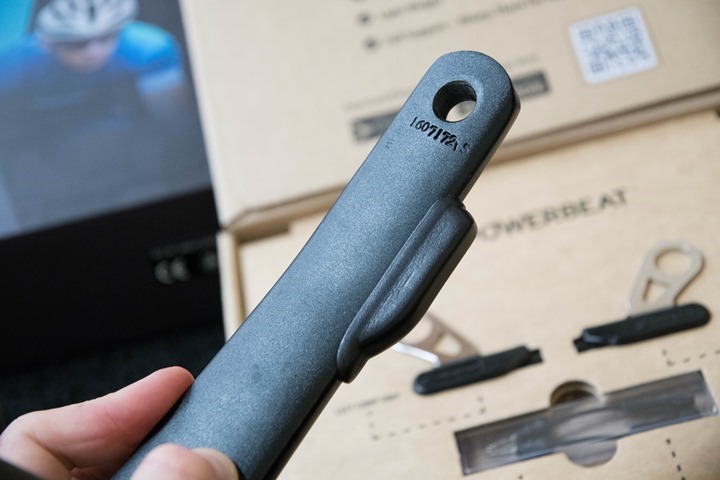 Like any company that intends to stay in business longer term, they’re also working longer term projects.  In fact, some of these they showed to me two years ago, but have now gotten to the point where they’re willing to put them out there in a public setting. 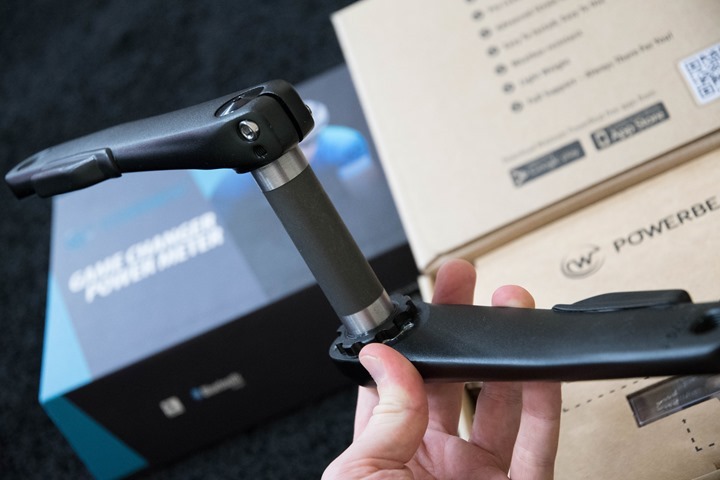 What you see above is an option they’re offering to OEM’s (i.e. crankset manufacturers or bicycle manufacturers) to get power directly on the bike/crankset without having external pods.  You can see in the above image that the pod is directly attached to the crank arm.  They’ll do this at the factory and sand off a portion of the crank arm for a cleaner bond, effectively identical to what Stages and others would do.  This has the appeal of likely increasing accuracy/stability of the system (versus Joe or Jane Consumer doing the install), but more importantly it makes it a lot cleaner with no external cables.

So where does battery power come from you ask? Wireless charging.  You can see below the simple wireless charging cable that you can use to charge up the pods when you’re back home.  Their current pods use a headphone style jack to charge (which was definitely not courageous according to Apple).  Thus, their new system has courage. 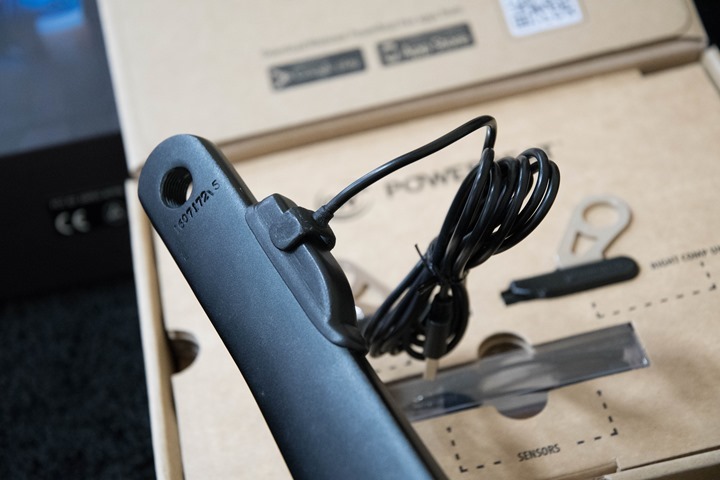 This new system isn’t offered to consumers, and at present WatTeam is still shopping it around to OEM’s.  I do wonder though if they were to offer something at $599 with the crankset included how that might do, heck, perhaps even $699 (again, for dual).  That might hold water in pricing for quite a while in the current market.  This is similar to what Stages and even now SRM do: make ‘in-house’ crank arms.  They could still offer the option to install on your own for cheaper, but I suspect there’s quite the market for people to just buy a house-branded $599 or $699 dual left/right system that’s accurate.

But moving back to their focus for now (shipping their existing self-install pod system), I’ll be watching it closely.  It sounds like they’ll have units for me to self-install sometime in November, for testing.  While they did offer a pre-installed crankset much sooner, I really want to see the exact experience the end user gets.  That’s such a critical part of this product, and so it’s what I’m most interested in testing.

And of course – it’s what the entire power meter industry is waiting for as well.  If WatTeam can pull this off (an accurate self-install system dual-leg system for $499) and get a few months of shipping under their belt, it’ll undoubtedly cause shifts to the power meter pricing landscape next spring.  But until then, I don’t expect much (if any) further shifts to near term power meter pricing.  Remember: Companies will only decrease pricing if something disturbs that pond, and right now, nothing new over the past few weeks has caused that disturbance.

For all my other Interbike posts, simply whack this link.  It’ll keep you busy for a bit.  Plus, there’s still more to come as I continue to unclog things!