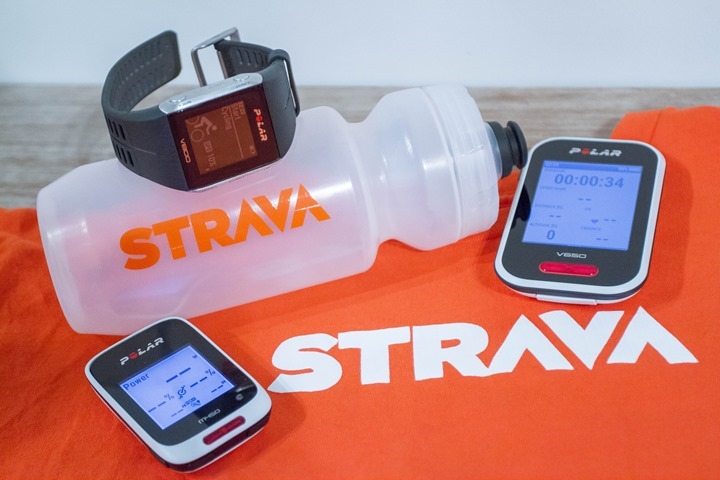 Earlier this morning Polar rolled out their long awaited (and previously promised) ability to automatically sync Polar Flow activities to Strava.  This means that upon completion of an activity, the activity data will automatically sync to Strava’s site.  No more manual uploading required, or 3rd party workarounds.

I gave the system a quick whirl this morning prior to my flight – and getting things all setup was pretty easy.  Here’s how it works.

The whole process is quick, and should take less than 60 seconds, but if you’ve already had your morning caffeinated beverage (or are just one of those annoyingly chipper people in the morning), then you’re probably looking at 20-30 seconds end to end.

1) First up, you’ll need to associate your Polar account to Strava.  To do that, login to Polar Flow as normal, and then click on your name and ‘Settings’. 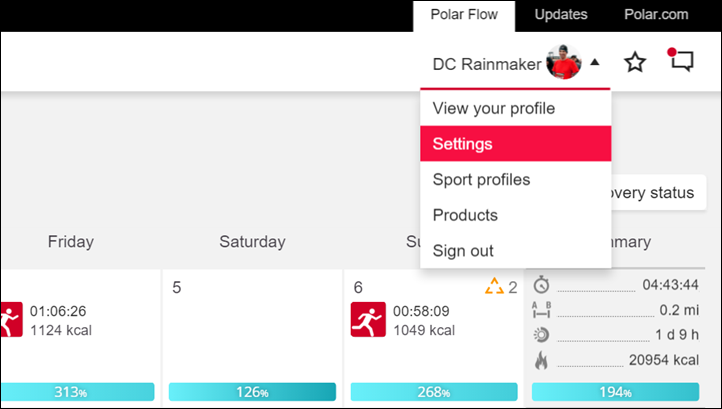 2) Next, you’ll see the option for Strava down below, just click ‘Connect’:

3) Then you’ll agree that if ‘Something Bad’ happens, you’re not going to hold Polar responsible for Strava’s mistakes, your mistakes, your ex-lover’s mistakes, or your pet snail’s mistakes. If someone lights the dining room table on fire – it’s also not their problem.

4) Following your agreement you’ll be whisked over to Strava’s page, where you’ll approve the relationship with Polar: 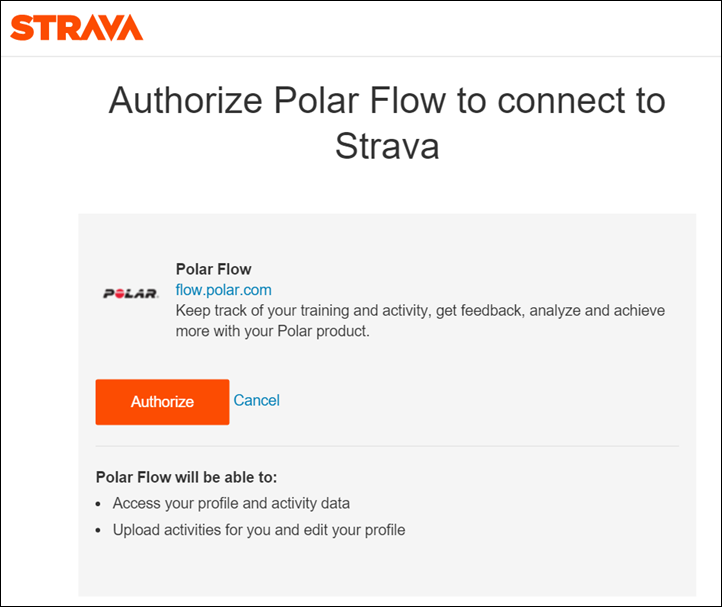 5) With that – you’re done! You’ll get a quick message from Polar Flow saying all is well: 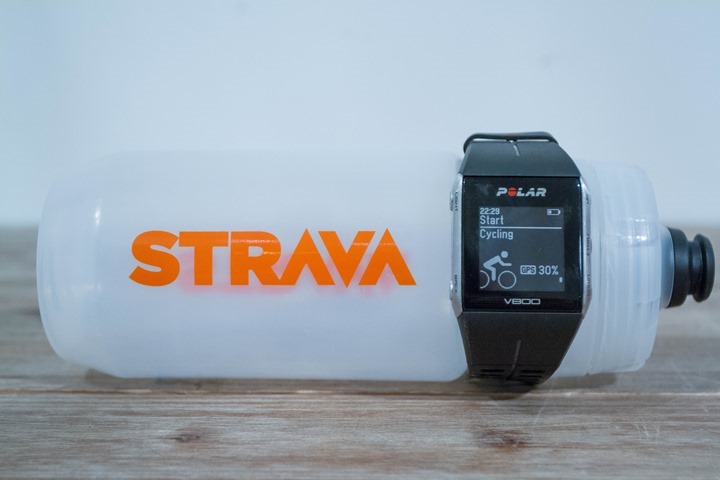 When it comes to using the newfound integration, once setup there isn’t honestly a lot you’ll do differently than before when using either Polar or Strava’s platforms.  You’ll sync your unit however you normally do – via either Bluetooth Smart (i.e. V800) or USB (i.e. V650).  Nothing there changes.

Once you do sync though, you’ll find that your activities are located on BOTH Polar Flow, and a few seconds later on Strava (really, it’s under 30 seconds until they show up on Strava).

The activities appear as normal on Strava, and Segments rankings will appear on Strava as usual as well.

Interestingly, unlike Garmin’s auto-sync to Strava, Polar correctly ‘respects’ the privacy settings that you’ve configured on your Polar account.  So if you’ve set all activities to be private by default, then on the Strava side it’ll show up private until you change it otherwise (Suunto works identical to that of Polar).

A few other tidbits of note:

Multisport activities: These will appear as separate activities, one for each sport.  Transition times are not transferred however.  So a triathlon session would appear as one activity each: Swim, Bike Run.  No activities for transitions.

Indoor activities: These sync as well, I tried an indoor cycling session and it pulled over correctly.  I have not tried an indoor swim session however (which Strava doesn’t really know how to display anyway).

Previous history: The Polar to Strava solution does not sync previous history.  It’s from the moment you connect your account going forward for any new sync’d activities.  In the event you had an activity from last night that you hadn’t sync’d yet, then that will transfer to Strava upon sync.  But if you sync’d after your workout last night, then it won’t show up on Strava.  Only your new activities going forward would.  If you want to transfer older stuff, you’ll have to use the manual export method and then manually upload the files to Strava.

Other items: Polar has also put together a complete listing of other quirks, all of which are normal when companies send data to Strava (i.e. exact distances might differ). You’ll find this list here.

Finally, remember that this is a one-way sync of completed activities from Polar to Strava.  This is NOT displaying Strava Segments on any Polar devices (on your watch/head unit).  That’s not something currently offered on Polar devices, nor has Polar ever hinted at offering it.  Garmin presently has exclusivity on ‘Live Segments’ on the Garmin platform for another 15 days, until January 1st, 2016.  But given Polar has never hinted at offering this capability, I wouldn’t expect anything to change there anytime soon.  Though, I would point out that the flood-gates basically open in January to other companies adding such support.  The only one to my knowledge that’s committed to providing such functionality (aside from Garmin’s existing units) on a head unit is Wahoo, with their upcoming Wahoo ELEMNT.

In the event you want to disconnect your account, you can do so at any time by simply going into either (or both) the Strava or Polar apps pages.  Simply go back the page for your Flow settings, and you’ll see the ‘Disconnect’ option.

Or, you can revoke access from the Strava side as well (Settings > Apps):

Either way – once you kill one side of the equation, the relationship is terminated.  Your previously sync’d activities will remain on Strava though, but new ones won’t show up.  You can always re-kindle the flames of love down the road again if you want though – simply start at the steps back two sections above.

It’s good to see this in place, though the speed in which this effort took to get in place was simply too long.  I’m hoping now that Polar has this integration completed, that future 3rd party integrations will be easy and trivial.  For example, I’d view adding in Training Peaks and Sport Tracks integration as critical to them being competitive in this well-connected world.  I’d also say that making it easy for any other 3rd party apps to provide sync capabilities is just as important.